On the look out for a cheap place to base ourselves for a month, we wanted was sun, sand and good wi-fi. Our search brought us to Lisbon, and we quickly discovered we had been there before…kind of! Because the Lisbon San Francisco similarities are uncanny!

The more we walked around and got our bearings, we realized that Lisbon has a lot in common with one of our other favorite cities in the world – San Francisco.

Lisbon and San Francisco have so much in common, in fact, that it goes beyond the geography and infrastructure and extends to transportation, culture and lifestyle. Here are some Lisbon San Francisco similarities we discovered: 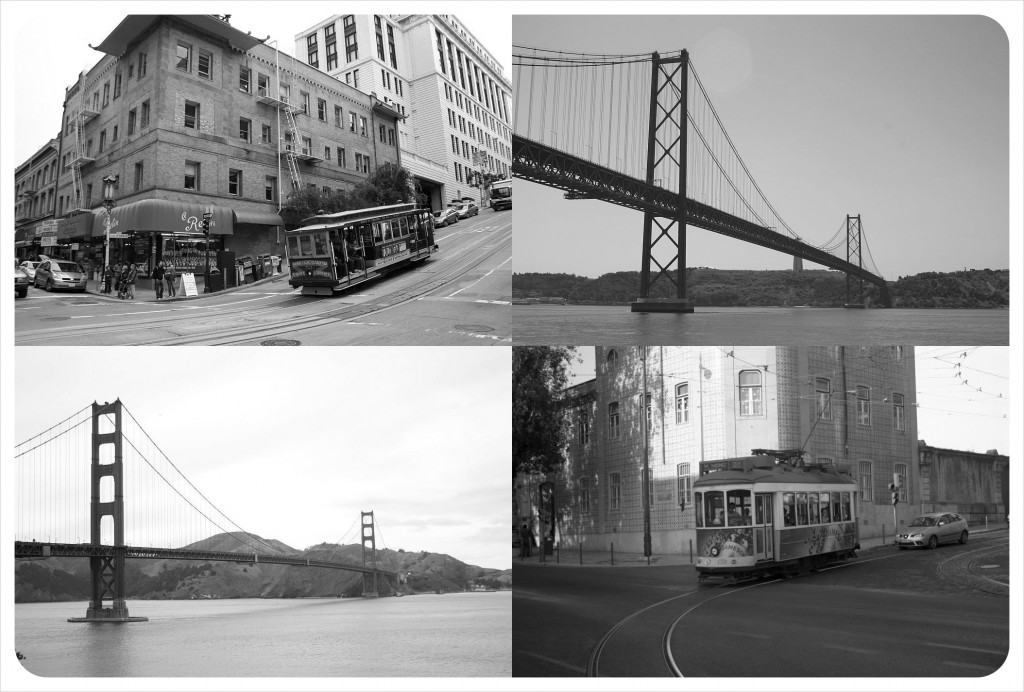 Between a bay and the ocean

When we think of the ‘west coast’, California is what first pops into our minds, but Portugal rightfully markets itself as Europe’s West Coast and the images of sun, sand and beach inspired by that idea are spot on. Lisbon is primarily located on the Tagus River just as it empties into the Atlantic Ocean, which means the city is surrounded by so much water, it boasts long stretches of waterfront property and miles of sandy beaches just beyond the city limits. 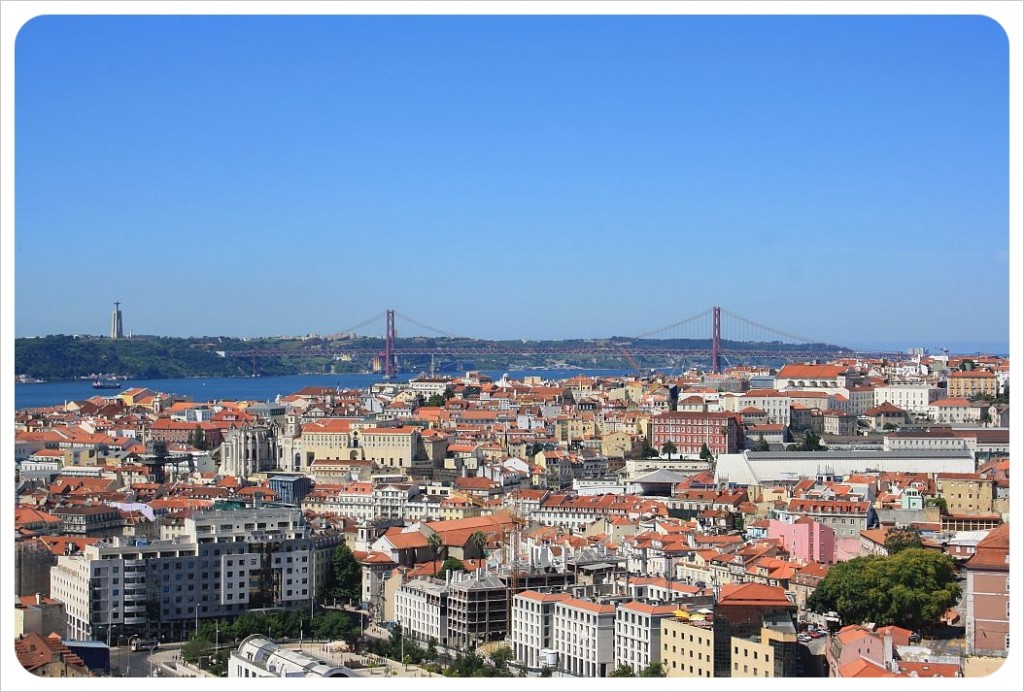 View over Lisbon and the 25 de Abril Bridge

Similarly, the San Francisco peninsula sits between the San Francisco Bay and the Pacific Ocean on the U.S. West Coast. The city’s Ocean Beach is comparable to Lisbon’s Costa Caparica, which are both known for big waves and key surf spots. San Francisco, too, has miles of waterfront and beaches – although not quite the same relaxed beach culture as Lisbon. 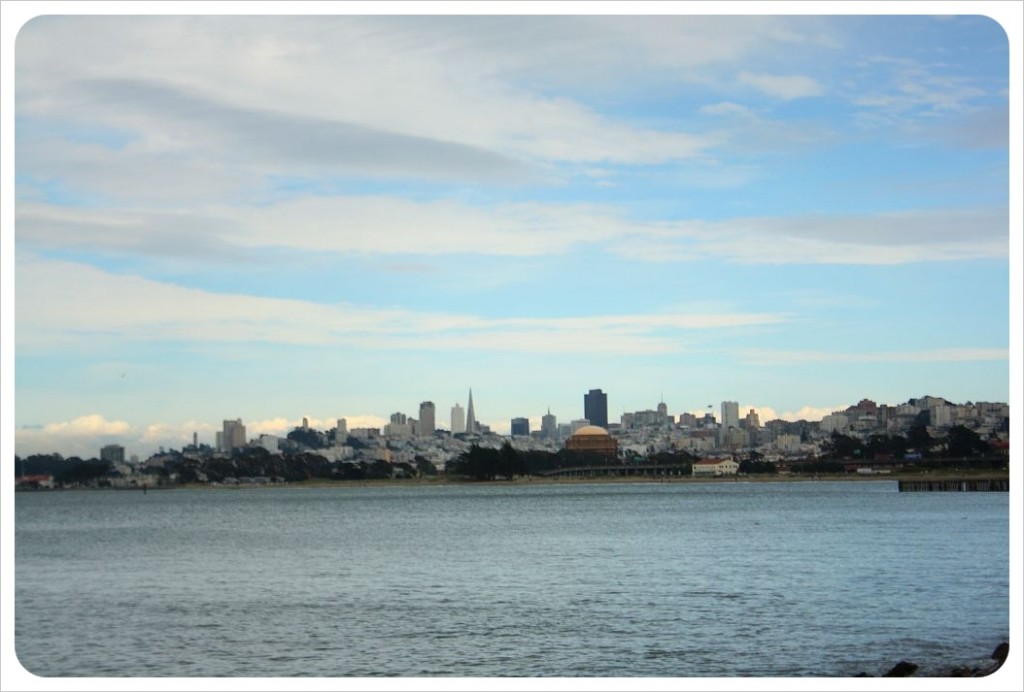 Another Lisbon San Francisco similarity: Lisbon and San Francisco are both built atop exactly seven steep hills and because both of us prefer to tour as pedestrians putting miles of pavement behind us on foot, we can attest to the quad-burning workout in both cities. Climbing those hills is worth it, however, as the seven peaks of Lisbon and San Francisco both offer incredible views out over the city and and the ocean.

Our favorite hill view in San Francisco was from the Telegraph Hill, and in Lisbon, we loved the views from the Colina de São Vicente, the hill on which the Alfama neighborhood is located.

When people think of San Francisco, a vision of the old-time yellow cable cars most certainly come to mind – and it turns out that Lisbon also has cable cars, and they are yellow. To get even more specific, both San Francisco and Lisbon have cable cars and street cars, all of which began to run in the early 19th century.  Cable cars can climb the hills, while street cars run best on flat terrain. In Lisbon, there are five working trams, called eléctricos (find out how to ride the tram in Lisbon), which were imported from the U.S and originally called ‘americanos‘. While in Lisbon, these bright yellow electricos are still fully-integrated as a major part of the mass transit system, San Francisco now runs only two operating cable car lines (the oldest manually operated cable car system in the world) and one street car line which runs from Fisherman’s Wharf to the Castro. 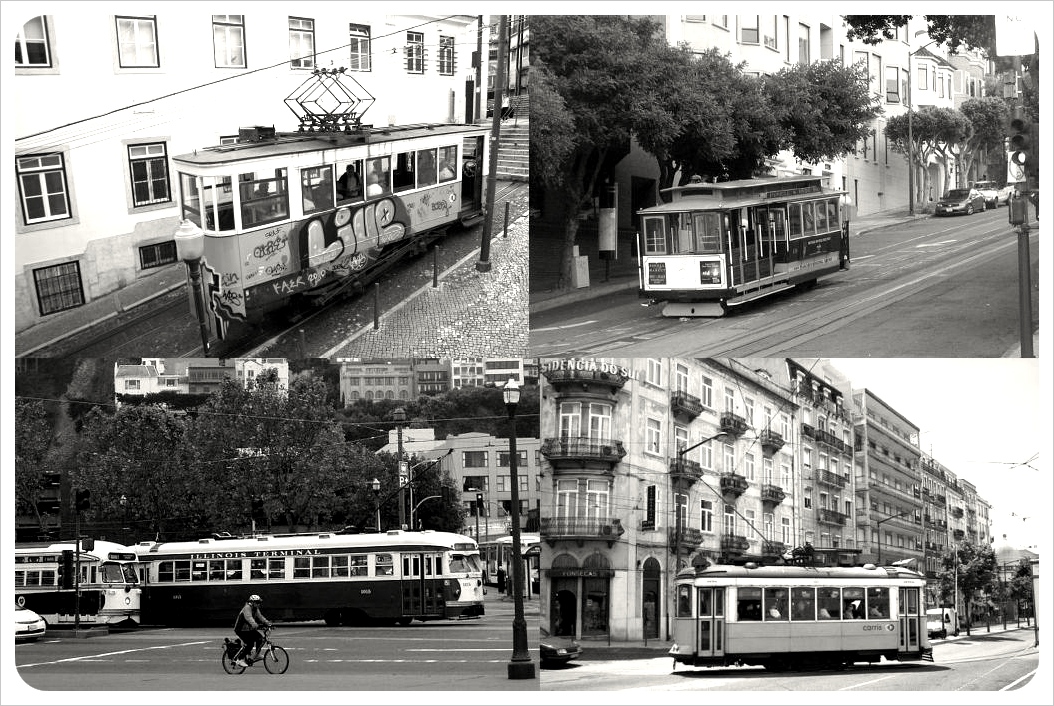 Early on into our Lisbon residence we walked down to the shore and, upon looking to our right, spotted a bridge so out of place, we did a double take. Is that the Golden Gate Bridge in Lisbon? You can’t talk about Lisbon San Francisco similarities without mentioning their very similar bridges!

Although it is called the Ponte de 25 Abril, this Lisbon suspension bridge – the longest of its type in Europe – looks almost identical to San Francisco’s iconic symbol. The two bridges are even close in size, as well, with the Golden Gate Bridge spanning 2,737m in length and the Ponte de 25 Abril reaching 2,277m across the Tagus River. The twin city feeling deepens here, as the  Lisbon version was actually designed by the San Francisco architect who designed San Francisco’s Bay Bridge. The Golden Gate Bridge has held the record for the tallest suspension towers as well as the longest suspension span for decades, and the Ponte de 25 Abril, which held the record for the longest suspension span in Continental Europe for years, still holds the record for the deepest bridge foundations. 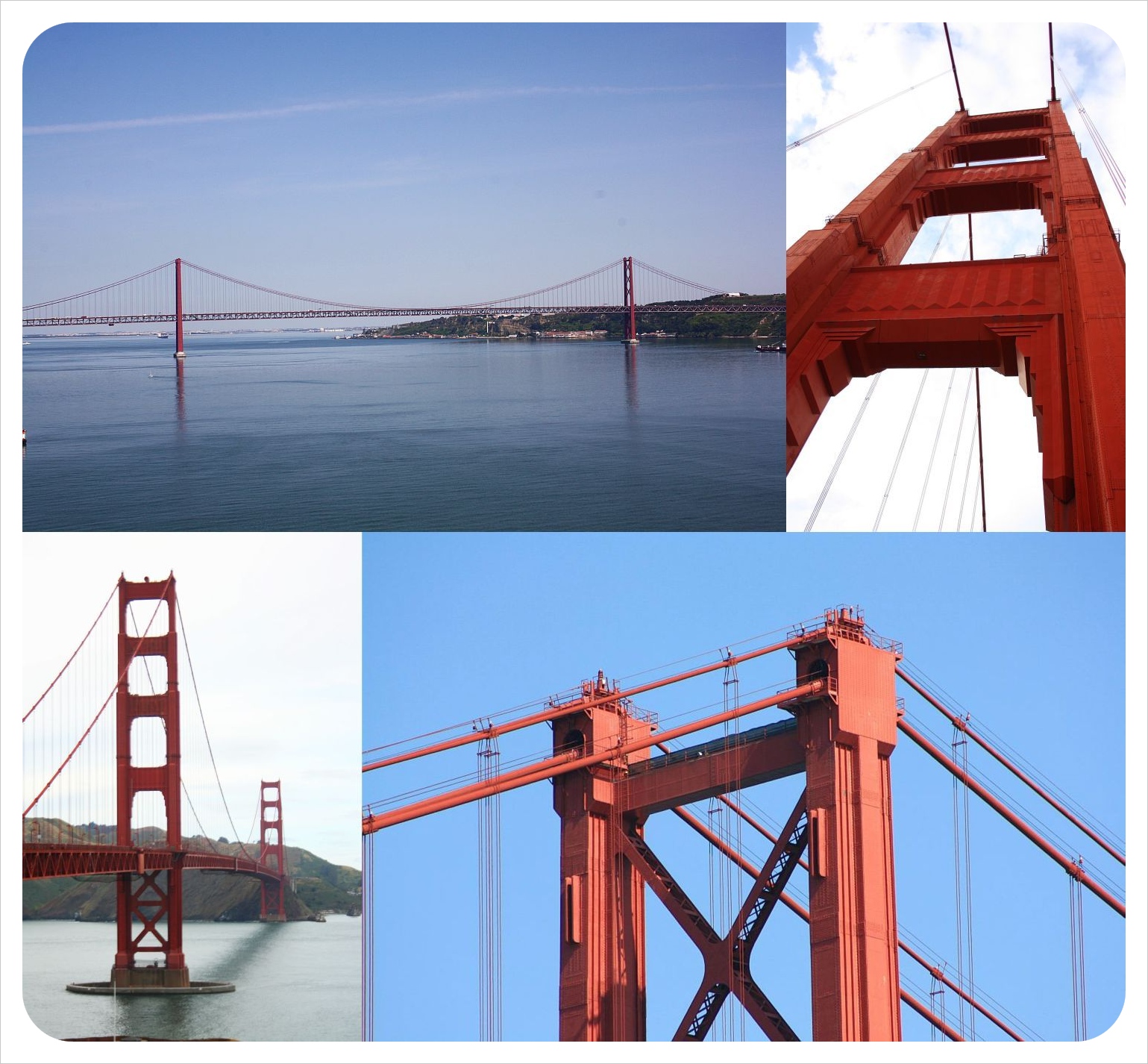 A history of severe earthquakes

Both cities have been leveled by severe earthquakes. Lisbon was hit by several severe earthquakes throughout the centuries, but the worst one hit in 1755 and destroyed 85% of the city. Over 150 years later, in 1906, San Francisco was hit with its hardest earthquake almost completely destroying the city and leaving over 400,000 people homeless.

The Climate – minus the summer months

They say that Lisbon and San Francisco share a similar climate and when we arrived in early June, the weather was chilly and cloudy, like a typical San Fran June day. However, as the days and weeks moved on, Lisbon revealed itself to be a hot and sunny Iberian beach spot more similar to southern Spain than San Francisco. The summers are night and day, but  the winters in both cities are said to be similarly moist and chilly. 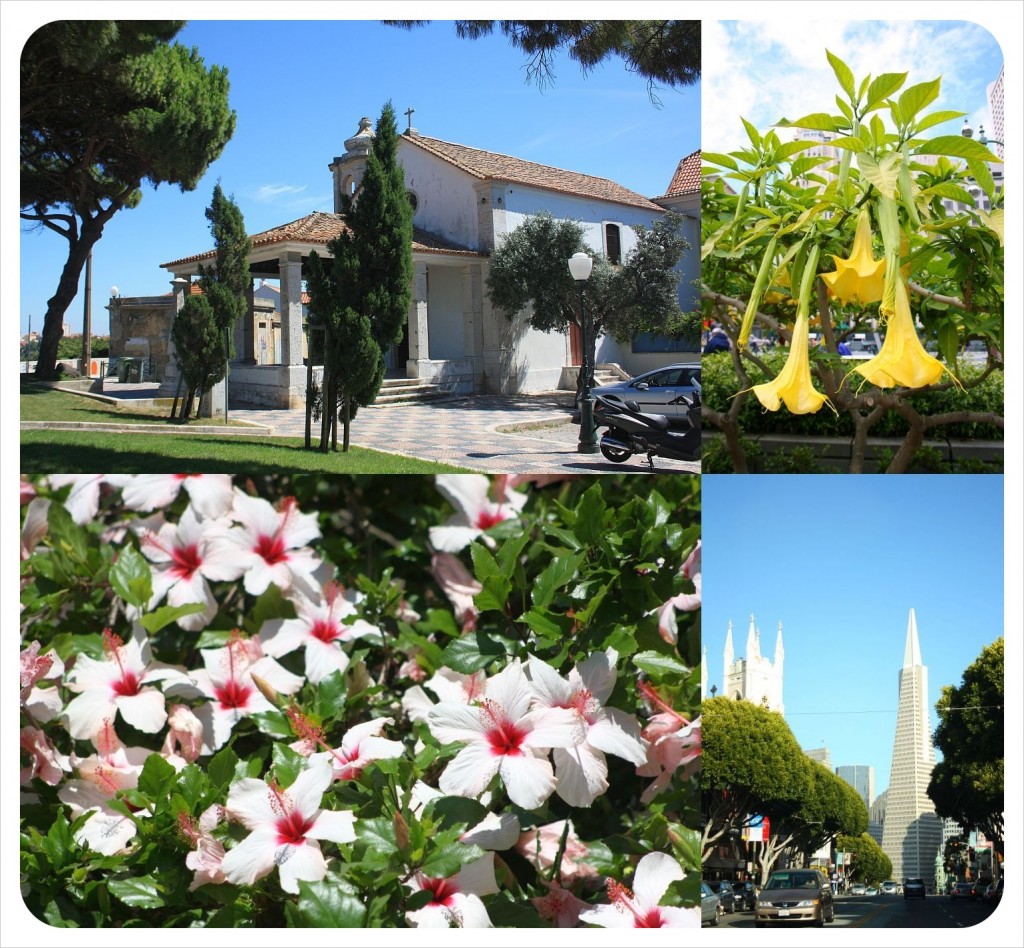 This might seem obvious, but too important to forget. San Francisco is the gateway to the wine region of Napa Valley for an afternoon wine-tasting of the ultimate relaxing boozy weekend, and Portgual is not only known for its sweet Port wine from Porto, but also its delicious Vinho Verde, or ‘green wine’, which is really more like a very crisp, refreshing bottle of white. At $8 in restaurants and even less in stores, Portugal is a wine-lover and bargain-hunter’s dream when it comes to wine.

Both Lisbon and San Francisco have a thriving coffee culture scene, but they truly are worlds apart.  Lisbon, like the rest of Portugal, is full of smaller coffee shops called ‘Pastelerias’, where locals dip in for a cheap 55 cent espresso and a sugary, creamy pastry all throughout the day. There are a couple of Starbucks locations downtown, but the Lisbonians head to their local pasteleria for a pick-me-up caffeine jolt, and spend ten or twenty minutes chatting away to the other regulars. San Francisco, and its neighboring Silicon Valley are both home to a well-developed cafe culture that couldn’t be more different to Lisbon. Here, locals frequent Starbucks, Blue Bottle or Peet’s Coffee and Tea, open their Macbooks and stick in their headphones for a day of location-independent working.

San Francisco, and especially its Mission District, are well known for its unique murals and street art graffiti. During our time in San Fran we spotted a fresh Banksy in fact! The world’s most creative street artists leave their mark here on the West Coast of the U.S., but not any people realize the incredible street art scene happening over on Europe’s West Coast! For street art junkies like ourselves, Lisbon boasts colorful social commentary across many of its buildings and public spaces. Take a stroll through the Bairro Alto, practically a public art museum with incredible graffiti. 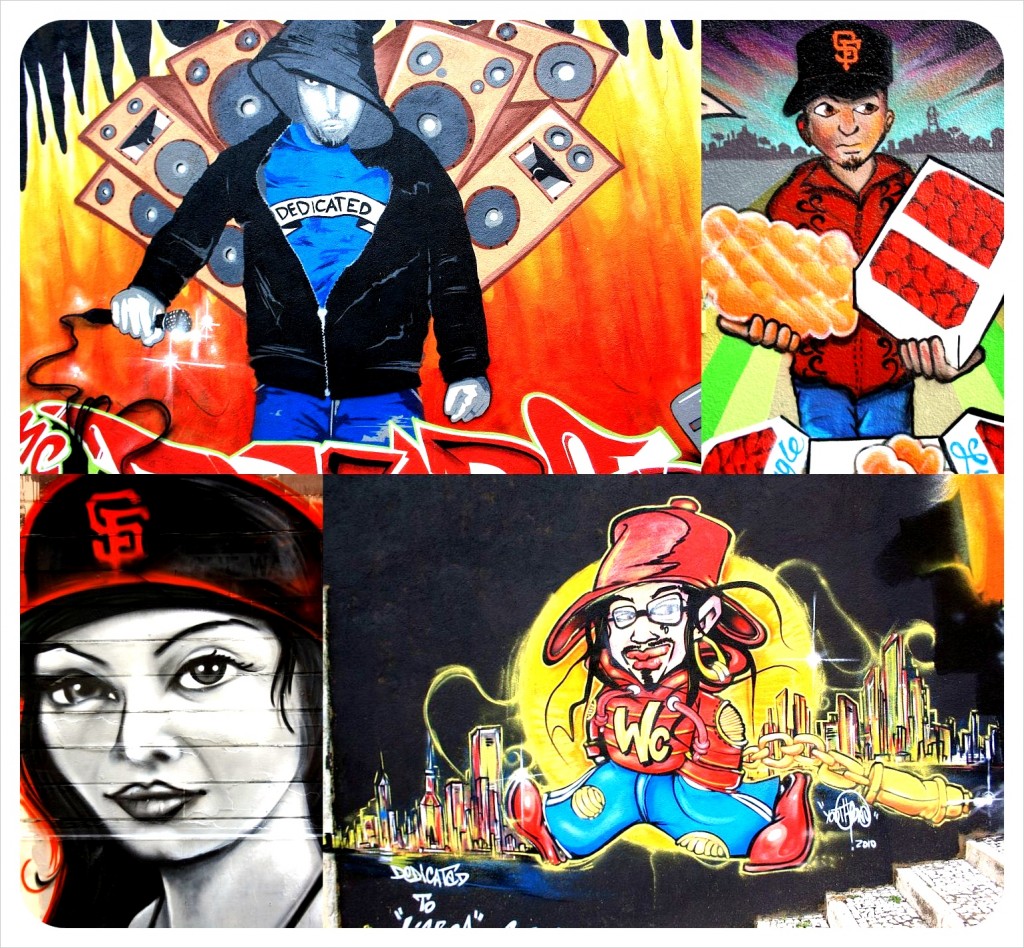 Have you been to both cities? Did you also feel such a resemblance? Did we miss any other similarities between the two cities? We’d love for you to let us know about anything we missed in the comments below! Both San Francisco (1915) and Lisbon (1998) hosted a World Expo and both cities have a world class aquarium.

Ha, I didn't know either of these facts! Thanks for sharing, Stefan :)

Another similarity between San Francisco and Lisbon: abundance of beautiful people with dark skin

I have been to SFO twice in the past and when I came to Lisbon this Sunday, in just two days, I could not help but notice the similarities. The cable cars, the hilly streets, the seafront and of course the golden bridge in both cities. I just started googling this and was glad to see that I am not the only one who feels that these are twin cities indeed !! Great article btw.

I have never been in S. Francisco, but I live in Lisbon area. As mentioned already, the bridge is a replica of the Golden Gate one, built by the same company. And actually we do have a California Beach in Sesimbra (app. 25/30 miles distance from Lisbon). It is said that this was the favourite places of one of the explorers who were in America and the American California was named after the Portuguese Beach. If you think that we had our earthquake in 1755, 20 years before USA become a country, and most of our historical buildings already existed then... it is really funny to see such similarities between both places! :)