I remember standing on top of the Eiffel Tower and how my knees turned to jelly when I looked down. How my heart rate doubled when I was walking across the bouncing suspension bridge over the Rio Grande Gorge in New Mexico last year.

One of the worst experiences was walking along the indoor balcony of Mexico City’s Fine Arts Palace, where only a small balustrade keeps people from falling down onto the ground floor. Just coming somewhat close to that balustrade caused me to nearly hyperventilate. Even being inside of high buildings is enough to make butterflies swirl around in my tummy – not the good kind though… More like thousands of annoying little ants running around my intestines. Reading this story about the floor of the glass bottom viewing boxes in Chicago’s Willis Tower cracking was enough to give me sweaty palms.

I remember how everyone was hanging out in that box the last time we went up there to enjoy the views over Chicago, seemingly careless and happy about the thrill of seeing the street right below their feet, and me just wanting to pull them all out of that damn thing, sweating heavily and my heart racing. 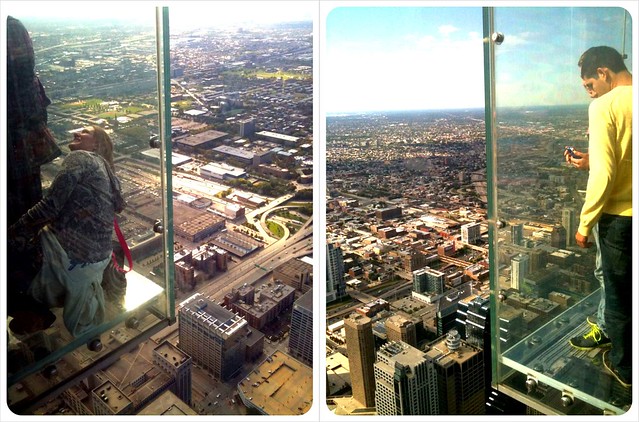 My fear of heights is bordering on a panic of heights. The edge walk on top of Toronto’s CN Tower? My nightmare. Abseiling from the highest building in La Paz? Horror. Walking on a tiny walkway hundreds of meters above an abyss? Unthinkable. And just looking at the height in these pictures of the world’s tallest rope swing make me feel like throwing up. Bungee jumping o skydiving? Only over my dead body.

And yet, here I was, standing on the lowest step of a set of stairs that led into nothing but thin air, about to step off it, into… nothing. The ground hundreds of feet below me (apparently the height is equivalent to a 20-story building), and I was only hooked to a small metal snap hook via a thin rope that was holding my harness (and my entire body weight!), connected to an over 2,000ft long steel rope; the end of it not even visible from our starting point. What the hell was I doing here?!

This wasn’t my first attempt at zip-lining. The first one in 2007 seemed even more pathetic now that I was about to whiz from one mountain to another with speeds up to 90kmh/55mph. Back then, Jess and I were visiting Cornwall and were invited to try out a brand new zip line off a cliff over a beach – one single short zip line, and we’d be lowered to the ground (which was much closer to the zip line than this one) after a quick 20-second ride. We were standing next to each other on the parallel steps, counting down: three, two, one… And neither of us let go. This went on for about fifteen minutes until we eventually jumped off the cliff (literally), even though we were both terrified and convinced that we were stupid for doing this. I felt sick to my bones all day after that.

Fast forward seven years and here I am on a parallel zip line again, this time about to jump off a stair that leads into the air, and four more ropes like this one after that.

Admittedly, I wasn’t here because my idea of an awesome afternoon in Whistler involved whizzing through tree tops, but because the fab team behind the Great Coast Road Trip had arranged this activity for us two adventurous girls. And at the time, it had seemed like a splendid idea. Now that I was actually about to jump off these stairs, not so much anymore. Like, not at all. Could I possibly chicken out?

When the first two people went, I felt my heart sink to my boots. I told Rease we’d had to go soon after – I knew that if I waited too long, my fear would turn into panic and there was no way I would be able to let go once that happened. The next two people went, and we were up next. I felt like crying. Why do people do this, I thought to myself. Rease on the other hand was beyond excited and couldn’t wait to go. I had to do it. Back in Cornwall, it was just the two of us – we could have chickened out – but here was a whole group that was in search of a thrill, which meant if I would take as long as I took in England, I’d slow down (and annoy) the whole group. 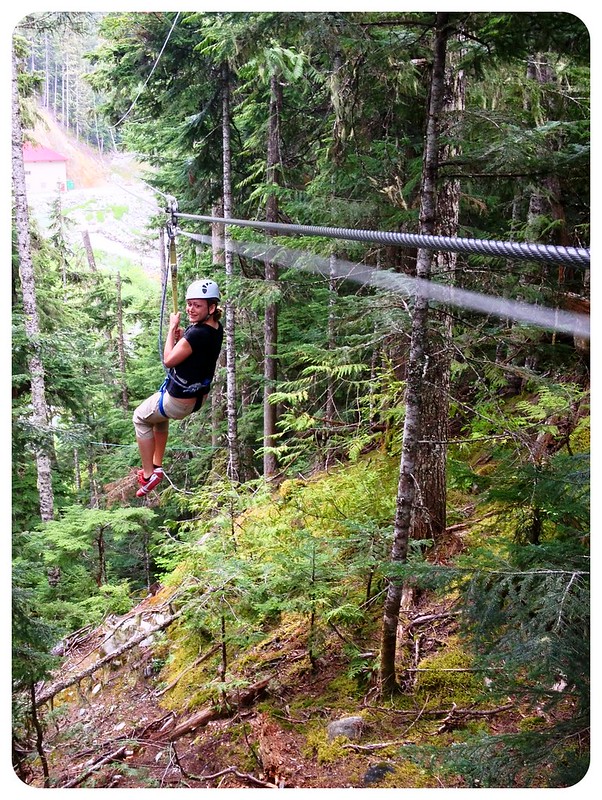 Three, two, one… And I let go. My heart skipped a beat as I sped off into the unknown – truly the unknown, because you couldn’t see the other side – down the line, faster and faster, the giant gap between me and the ground always right in front of my eyes. A million thoughts raced through my head, from ‘Oh my god the rope is gonna snap, I will die’ to ‘I really want to see a bear.. Is that one down there?!.. Not so fast!!’ to ‘WTF am I doing here!?’. 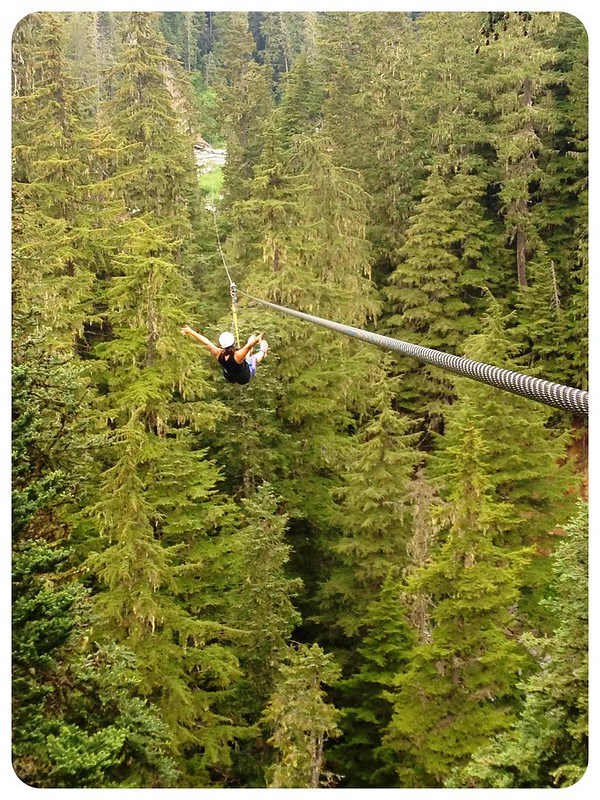 When we, after what seemed like an eternity but in reality was probably not more than 60 seconds, finally reached the other side, I could barely feel my legs. I was so shaky that I was almost not able to walk. For a moment I thought I might pass out.

All I could think was: I have to do this four more times. Instead of facing my fear only once, I had to go through this nightmare five times. This was insane!

The rest of the group had a blast. The faster, the better, it seemed, and people were even zipping hanging upside down (hi Rease, you daredevil!), with their arms spread wide open, enjoying the exhilarating thrill of flying through the air. For me, every ride was basically like this :

You would think it’d get easier with each time, but it didn’t. Each and every time I was convinced the rope would snap, and I would reach the other side shaking. I only wanted to make through it…. Which, in the end, I did.

What’s your biggest fear? Have you faced it?

Thanks to Rease for capturing my terrified face and screaming. 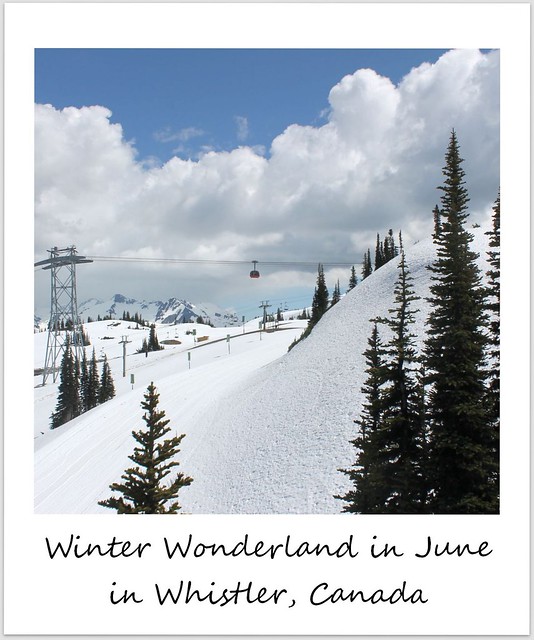 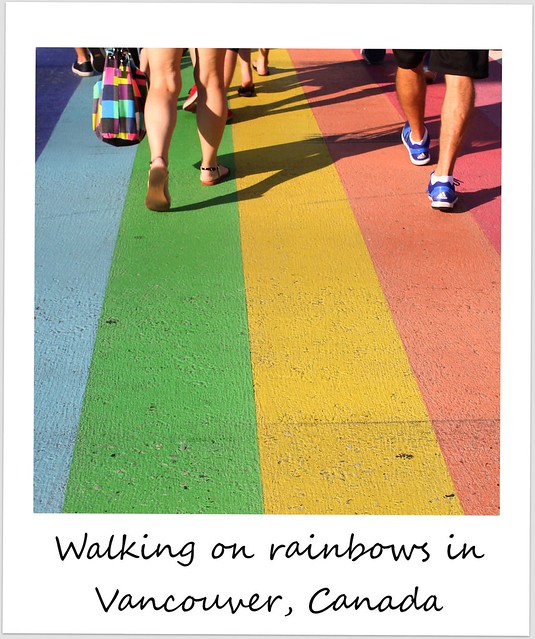 Hello from Canada! I arrived in Vancouver on Friday for the Great Coast Road Trip with my friend Rease (more details on that trip here, plus two awesome giveaways!) and we’ve had an amazing start to the trip with a picture-perfect spring weather this weekend! There was not a single cloud in the sky when we took a cable car up to Grouse Mountain, the Peak of Vancouver, to take in the splendid views over the city and the Strait of Georgia. We didn’t quite expect snow up on the mountain, but it turns out that up here at 4,000ft /1,200m there’s still snow in June!

After our mountain visit we returned to sea level and started our exploration of Vancouver. We rented bikes and cycled for hours through the city, checking out neighborhoods like Gastown (the historic birthplace of Vancouver), Granville Island, Yaletown (a revitalized waterfront neighborhood) and Davie Village, Vancouver’s gayborhood, where we stumbled upon these colorful rainbow pedestrian crossings. They were introduced here last summer just in time for Vancouver’s big Gay Pride celebrations and have permanently replaced the black and white crossings.

Our next stop is Whistler, and I can’t wait to head up into the mountains! Luckily I’ll be back in Vancouver to explore more of the city mid-next week – I know I have only scratched the surface so far, but watching the sunset at the beach (with huge crowds!), running in Stanley Park, eating ridiculously good ethnic food and getting a feel for the different neighborhoods made for an excellent start.