It is amazing how much life you can squeeze into 100 days. It seems like forever ago that we wrote our first 100 days on the road post from Mazunte, on the Pacific coast of Mexico. Between then and where we are now, in San Salvador, we have visited four countries, explored caves with Mayan skeletons, climbed volcanoes, swam with sharks and sting rays in the Caribbean, lived for a month in a beach front apartment in Playa del Carmen, had two fairly major illnesses, almost got robbed, traveled to places almost completely off the beaten path, met loads of people, worked full time, even took on extra work, blogged more, and we are nearly finished with a globetrottergirls.com website redesign.

In short, during our second 100 days, we have really gotten the hang of long-term travel. Balancing full-time work and full-time travel has gotten much easier, and it no longer feels as though we are ‘squeezing in’ time for the blog, either. Life on the road is certainly more spontaneous than stationary office life, but habits develop and life inevitably takes on a new, but distinct rhythm. What may have initially felt exotic is now second nature – chicken bus trips flinging us faster than roller coaster rides, hopping in and out of tuk tuks, bellying up to market stalls to wolf down street food, and even things like negotiating prices and striking up conversations with complete strangers now come with ease. While some things have gotten easier, there have been some definite lows: Dengue, Giardia, bed bugs, serving as a mosquito buffet, and the typical bouts of some painful stomach cramps. In addition to interrupted good health, our work/travel pace has also been severely interrupted at times. A trip to Todos Santos and Chichicastenango in Guatemala and a hectic week in El Salvador kept us offline a lot recently, and we have had to make up for a lot of lost time.

During these offline times, it has become clear that the longer you travel and fall in love with exploring, the more you tend to fall off the beaten path, which means invariably means away from quality internet connections. This is fine for the mind-blowing life experiences column, but makes managing priorities a challenge, walking a fine line between staying planted online along the beaten path which ensures a much easier time of balancing work and travel, but strictly following the ‘Gringo Trail’ can be less than fulfilling for the explorers in us, even if it satisfies the worker inside. Our time in Antigua has also come and gone – a milestone of sorts for us. I lived in the colonial ex-capital for two years from 2001-2003, and since we met in 2006, I had constantly told Dani stories and even introduced her to some of the crazy characters from my time there. Finally after four years together and over five months on the road, we arrived in Antigua, staying for two weeks. We worked, I overcame the rest of my Dengue, we ate out (a lot!), and we basically recuperated and prepared for the heavy weeks of constant movement to come. It was amazing to have Dani explore with me not only the town, but this part of my path that may have always just been stories, had we never set off on this trip. Two weeks was a great amount of time to rest in Antigua, but we spent even more time, an entire month, in a great apartment just two minutes from a nearly deserted section of Caribbean beach in Playa del Carmen. Here we worked intensely full-time, both of us, using the beach as the ultimate lunch break. Thinking back to the days of grabbing a sandwich and running an errand before stuffing ourselves back in the office in London, we appreciated every moment we had on the beach in Playa.

The Playa del Carmen segment of these last 100 days extended the Mexico leg of the trip even longer. After nearly three months, we semi-grudgingly cut off our time in Mexico toward the end of September, forcing ourselves to head on to Belize. 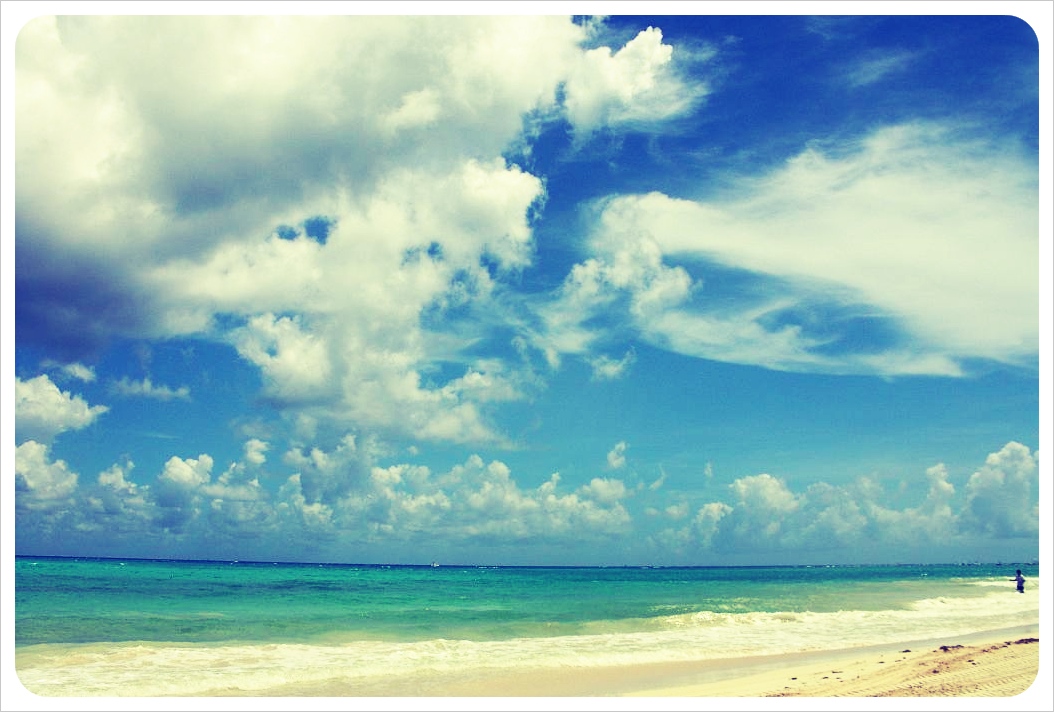 Of course, we ended up loving Belize, and Guatemala and El Salvador, too. During the former Reflections post one hundred days ago, we remarked that people, at least so far, are inherently good. Having now traveled to more countries, cities and smaller villages, our faith in people deepens, even despite an attempted robbery on my bag in a bus from Antigua to Chimaltenango (she razored the side, but didn’t get anything). Our enthusiasm for the people of Mexico (friendliest people on the planet) still stands, but we have been met with kindness, helpfulness and new friendships in each of the places we have visited.

One downside to our trip has been the fact that we eat out. A lot. We are tired of eating out in restaurants, and wish it were easier cook for ourselves. The food usually ranges from edible to delicious, but the waiting, the ordering, the clarifying what it means to be vegetarian (it has chicken, is that okay? No? Well, we have a lovely fish dish you might like to try….nothing with a face, you say?)…these things are time-consuming and complicated. Cooking for ourselves more often would be great, but only comes with our apartment rental and housesitting gigs, as the minority of hostels we stay at offers a guest kitchen. 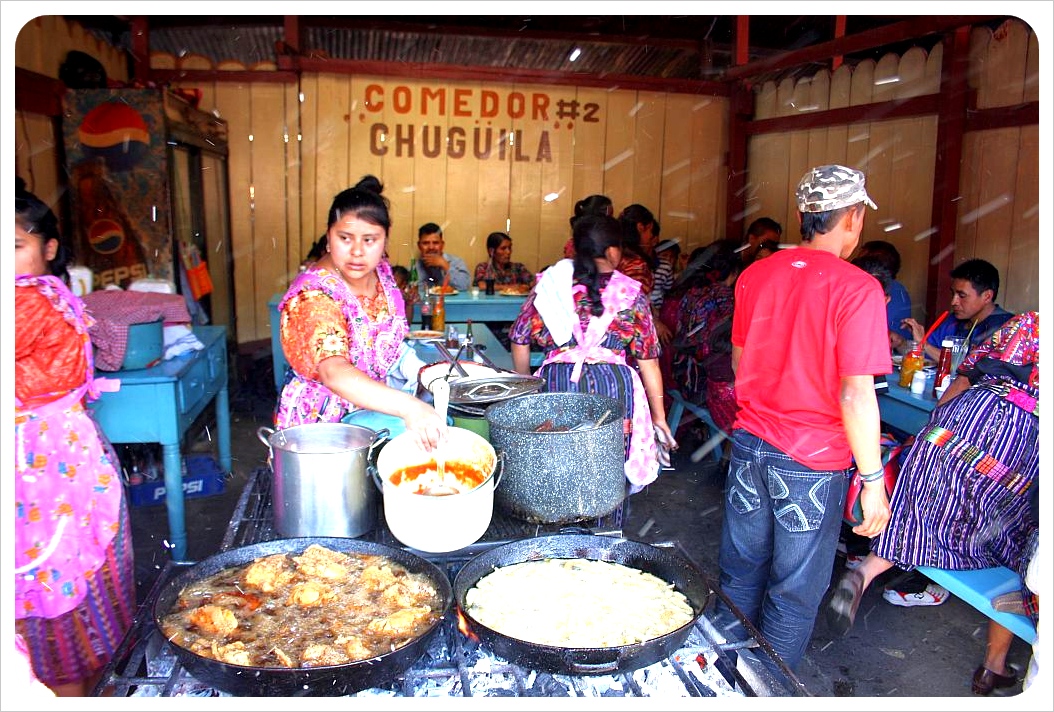 But listen to us, complaining about the luxury of eating in restaurants, or eating at all. How ridiculous, considering the level of poverty we see as we move southward through Central America. It is not only the poverty, but the sharply defined divide between rich and poor. It is so absurd to see a shoeless man, whose feet are both black from dirt and bloody scamper quickly past an exclusive Nine West luxury shoe boutique in San Salvador to avoid bumping into an elegant middle-aged woman as she steps out of her Lexus SUV to purchase yet another pair of $200 shoes.

Shoes, in fact, have been a sensitive issue with us and we recently bought six pairs of them for six boys in Chichicastenango, Guatemala. Some of the boys, on their feet selling goods all day long, wore tattered and too-big hand-me-downs or even only plastic sandals during freezing cold evenings and mornings. If you were to go to Chichi in the next couple of weeks and mention Dani and Jessie the kids of Chichi would probably still know who you are talking about. Rather than buying ourselves anything in the most popular market town in the country, we ended up buying only shoes and nearly 20 kites for about 15 different kids, and had kids chasing us around and in their best English begging, “Shoes por me, miss?” 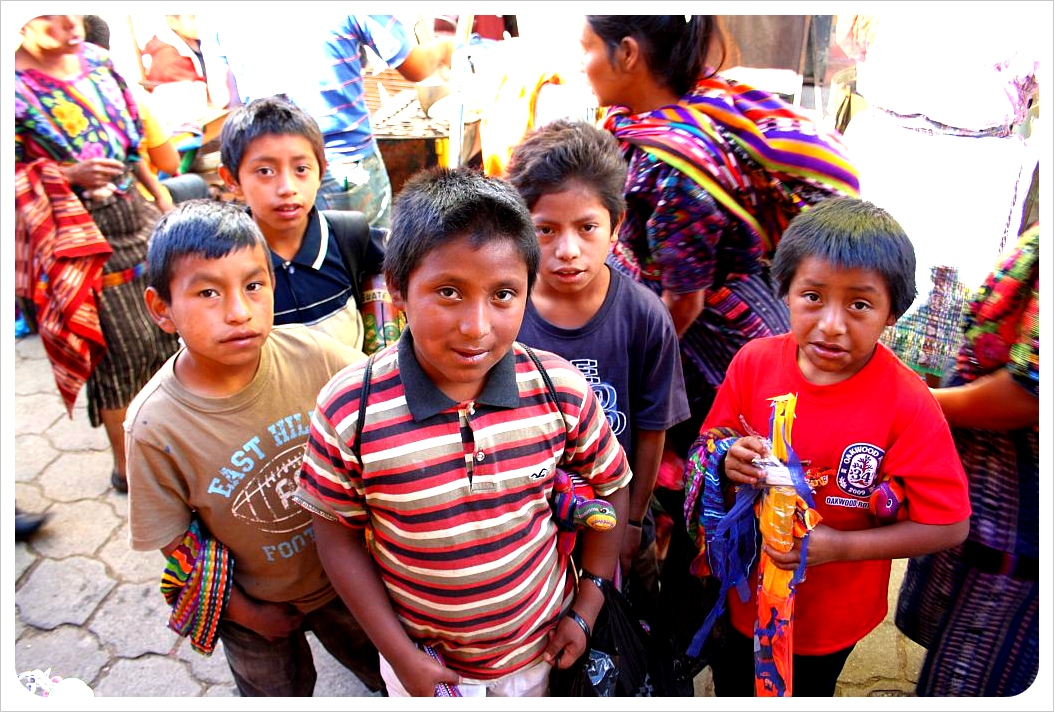 With each day our awareness of poverty increases, as we see human beings fighting for their lives as a result of the most basic illnesses and it breaks our hearts. Just as heartbreaking for us are the terrible conditions of the thousands of street dogs running rampant through these countries. For any of you who can watch a film with murders without flinching but turn down the volume and cover your eyes when a dog dies in a film – you will understand how we feel here. For every dog treated as one of the family, there are one hundred street dogs treated like rats. People shoosh them away and even throw shoes at them to force them away. 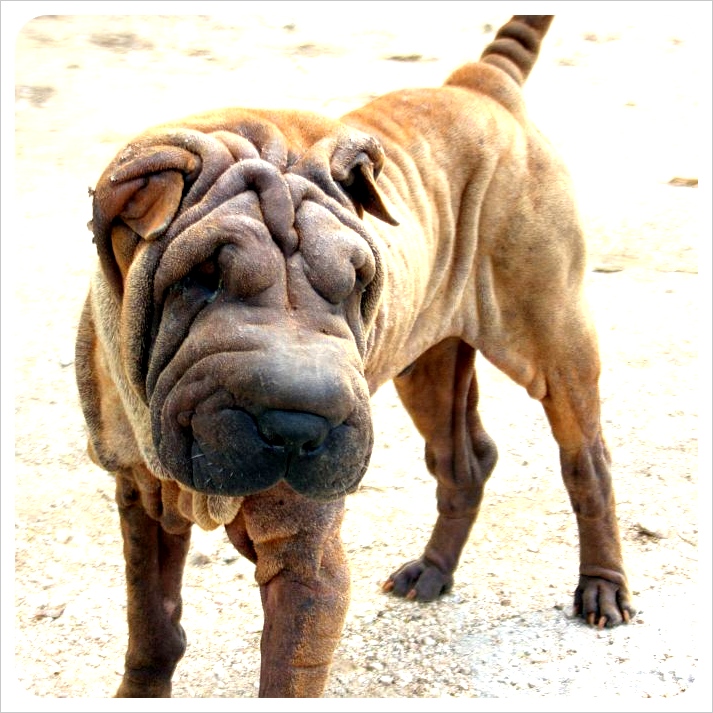 All breeds of dog, from tiny Chihuahuas and West Highland Terriers to Rottweilers, Collies and an amazing range of mutts, are bone-thin, starving, constantly scavenging, nose in any heap of garbage to lap up the remaining crumbs. Their skin is often open, bleeding, gouged from dog fights, or worse, the wrath of remorseless teenage boys. We have seen several dogs lying on the side of the road or in a park, breathing shallow sips of air in what are most certainly their last few breaths. In Quiche, near Chichi, I am sure that one of the dogs, had we gone back just an hour later, would most certainly be dead. But who to help first? How to start? This is where we are at now, and each and every day we see another dog, man, kitten, child, woman that we would like to help. And although we considered it, we can’t buy everyone their own pair of shoes or take in all of the stray dogs.

Even though we have recently decided to kick up our travels into a higher gear to make it to South America hopefully by January / February, don’t be surprised if we stop along the way to volunteer, and any recommendations for volunteering with children in Honduras/Nicaragua/Costa Rica/Panama are happily accepted in the comments below. 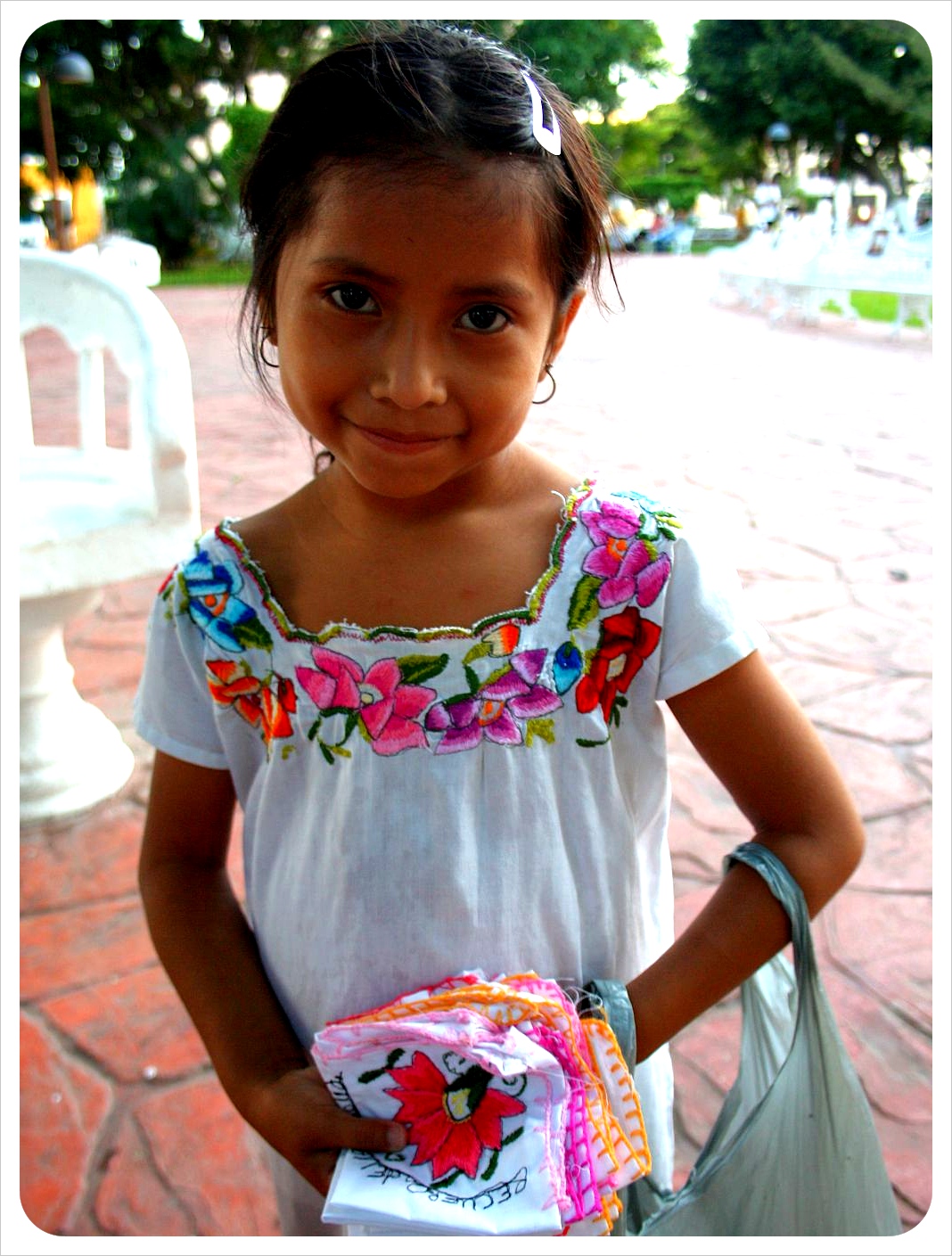 Lastly, in these last 100 days, as our site has grown and filled with content, we have decided to take globetrottergirls.com to the next level. We need a fresh design to display much more content at once, rather than the straight chronological blogging format. Some kinks and links might still need adjusting, but we would love to hear comments on the new look and feel of globetrottergirls.com. We also finally have a subscription box, so please please please feel free to sign up to receive email updates with new posts as they are published.

We can’t believe how long we have now been on the road and how quickly another set of 100 days has flown by. We have no idea where we will be after our next 100, which, unbelievably will come at the end of February 2011 – stay tuned and follow our journey along the way… 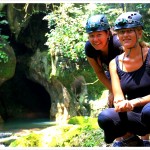 The Tops and Flops of 200 days on the road - GlobetrotterGirls

Wow. This is the first article I have read and I am blown away!

Well, thanks for that Marissa!

We are also really getting tired of eating out at restaurants all the time - it's time consuming, expensive and not that great here in Peru for vegetarians. It does feel spoilt to complain about it though. Luckily we have just landed a volunteering gig at a luxury mountain lodge where Simon is going to build their NGO a website. The food is amazing here and full of fresh veggies. It's funny the opportunities that come along just when you need it most.

Hopefully our paths will cross when you get to South America.

Erin - congratulations to Simon's volunteering gig, the mountain lodge sounds great - we're more than ready for something like that! We are hoping to have a similar opportunity at a hotel in Costa Rica when we get there. Nothing beats having an apartment with kitchen though. It would be great if our paths cross somewhere in South America!!

The Tops and Flops of 200 days on the road | Globetrottergirls