We GlobetrotterGirls are celebrating a major milestone this weekend – our first 100 days on the road! We thought it was time to reflect on our first 100 days of traveling, our favorite places, moments and lessons we have learned.

It has been over three months now since we packed up the last of our belongings and flew from London, England to Las Vegas, Nevada, USA. The gambling oasis in the desert  may seem like an unusual place to have started our round-the-world trip. Admittedly it was the cheap non-stop airfare plus seven days free hotel that inspired that specific location before setting off on our two-month, five-thousand-mile U.S. road trip and as-of-now 30-day stay in Mexico. 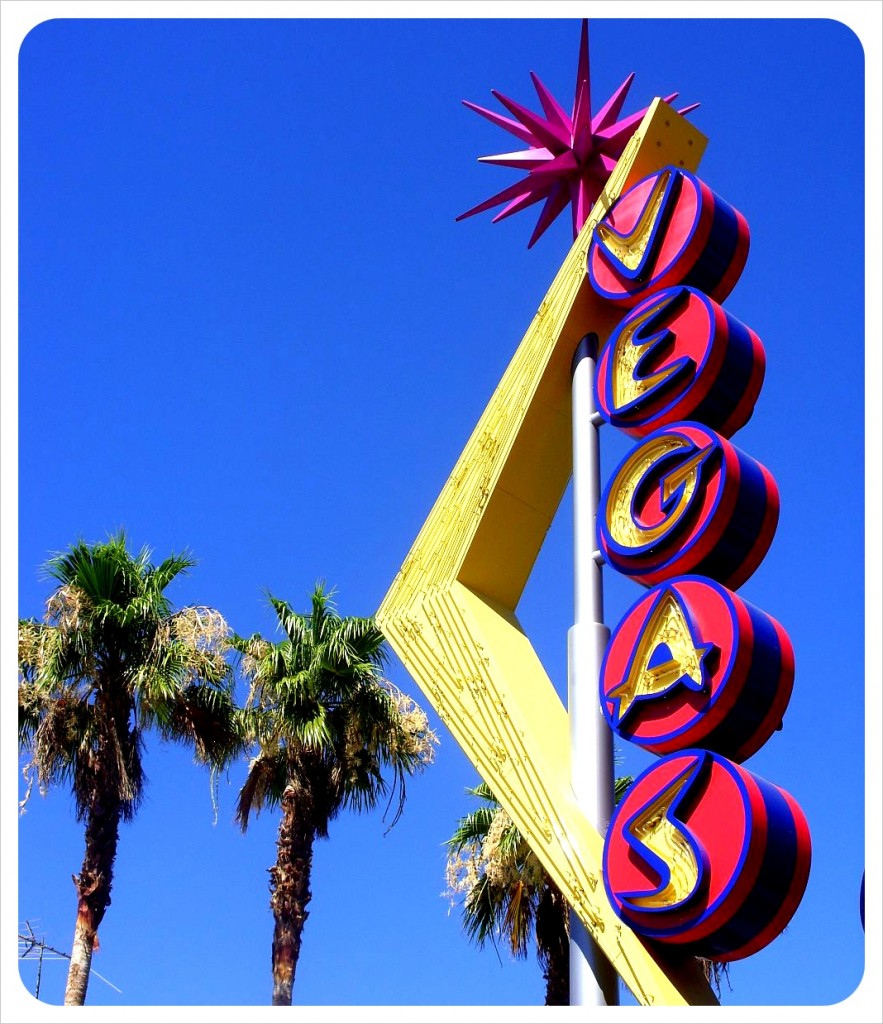 However, Las Vegas couldn’t have been a better anchor from which to compare the rest of our first 100 days.  In a place where consumption and capitalism are extreme, we had everything we ever wanted to the point of gluttony (obviously including booze, but for us, it was the endless array of buffets that had us feeling the depths of indulgence). Nowhere has it more glaringly clear that we were long-term travelers on a tight budget, gambling only pennies  and even a trip to the Peppermill Diner for breakfast on the Las Vegas Strip ran up a $40 tab. This was our 1st morning in Vegas, and that $40 is the equivalent of bed and breakfast for two at the lovely Posada Ziga in the beach town of Mazunte, Mexico on our 100th day. 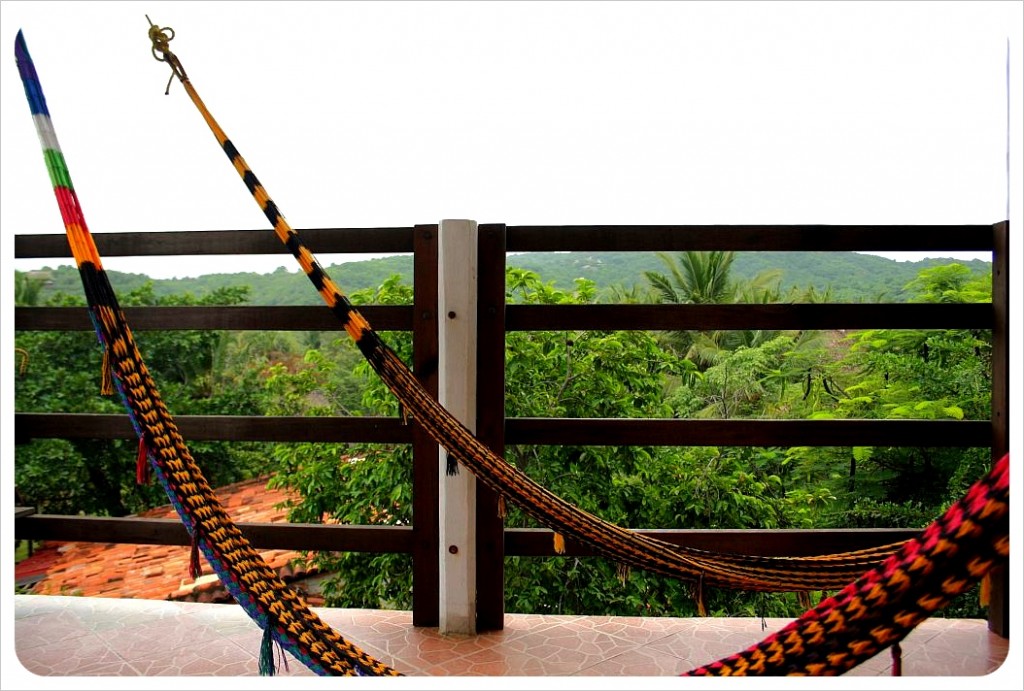 In our first 100 days, we stayed in a penthouse suite in San Francisco (this was thanks to a travel writing assignment and quite out of our regular budget), many budget motels (Motel 6, Super 8), a tent cabin right on a river in Big Sur,  a seedy but functional apartment hotel in Los Angeles, which we could only imagine was filled with Hollywood petty crooks and aspiring actors from small Minnesotan towns. We stayed in a three-star quality but basic hotel in the heart of  Mexico City and several very typical travel hostels as we squeeze and stretch our budget for awhile on the Mexican backpacker trail. Two of these hostels were much more easily compared to a prison than a penthouse (see our worst and best experiences in our 100 days – Tops & Flops here), but we have learned that the invigorating ups of travel are inevitably matched with  frustrating downs (less common). 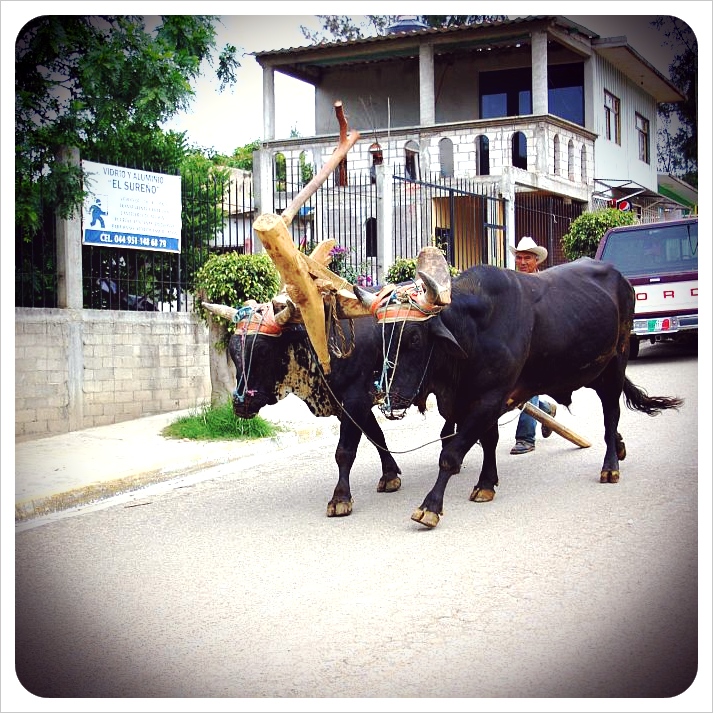 We also were hit with a good splash of culture shock. Arriving in Mexico City from the U.S. under the cover of night, the midnight taxi ride through flashing police lights, sirens and even fires lit in the streets indeed made us glance at each other and say, without words, maybe we were crazy to come to Mexico, as many friends and relatives warned?  The next morning, we were shocked again walking out the front door of the hotel into the heart of a buzzing business day in a whole new (and very loud!) world in the 22 million-strong Mexican metropolis. We’d say we adjusted pretty quickly, though, grabbing one bean taco and one potato taco from the nearest street vendor before heading to the ‘Zocalo’ or central square… 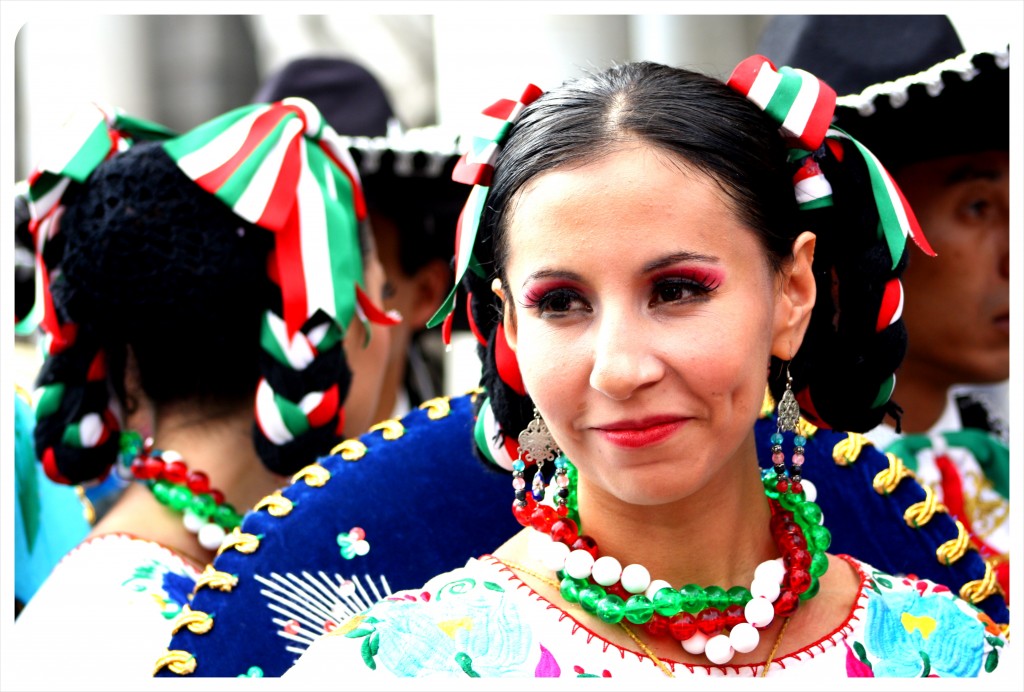 Throughout these 100 days, we have been met with a kindness that one could easily forget exists when wrapped up in our daily city lives. In the States we were able to meet up with several friends and family along the way, which was heartwarming. We also met a great couple in Tucson and fell in love with their dog, Millie, as we housesat and squeezed time in for a great tan on the decks of their private pool while blogging late into the nights and working early in the desert morning. 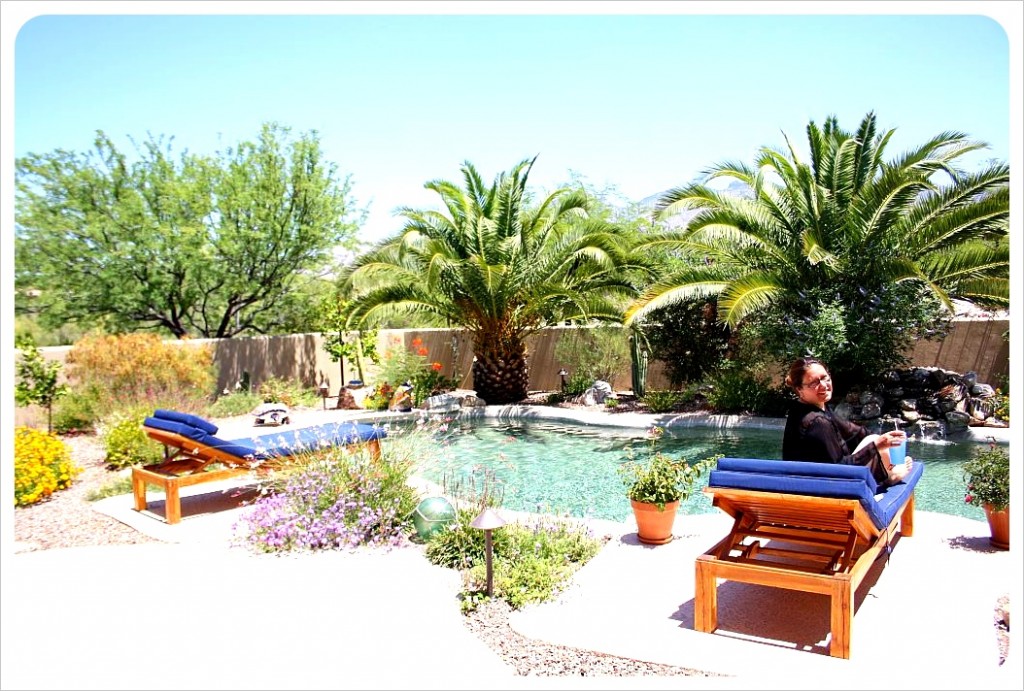 But despite the amazing friendliness we felt in the States, we have been greeted even more kindly by the people of Mexico, and could not be more satisfied with our decision to make Mexico our second stop on our round the world adventure. 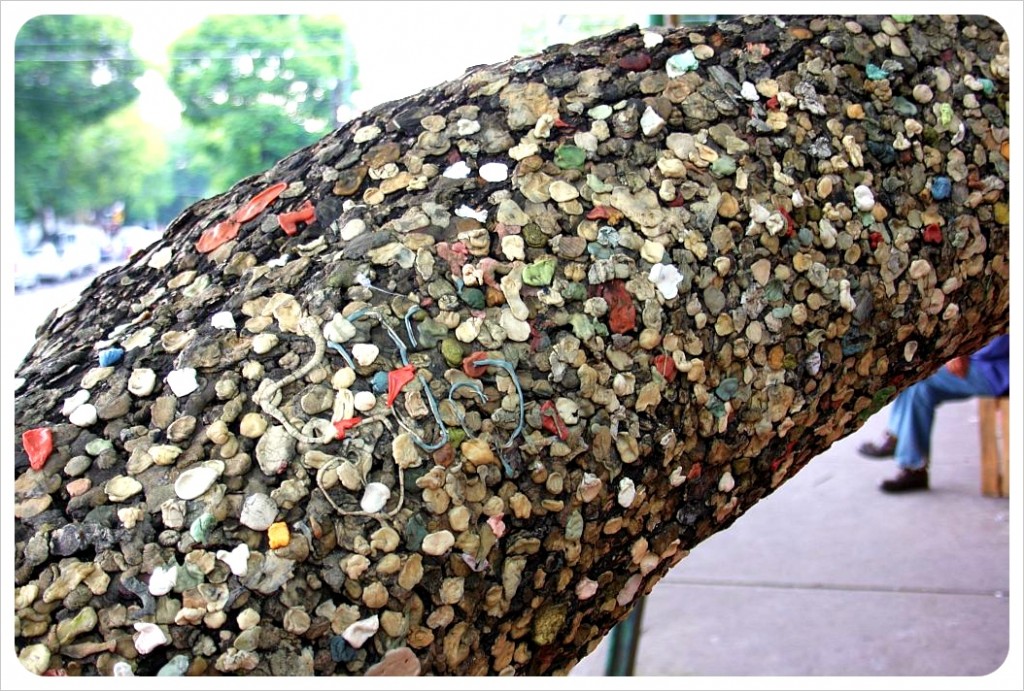 The people in Mexico tend to strike up random conversations with us or tell us stories, such as the man in Coaycan who explained the history of the two trees pegged with hundreds of pieces of old chewing gum. Though he may have already enjoyed a morning tipple, we enjoyed the story and that he took the time to tell two travelers a tale. Whether the story of love and romance involved in the gumtree was true or not remains irrelevant. 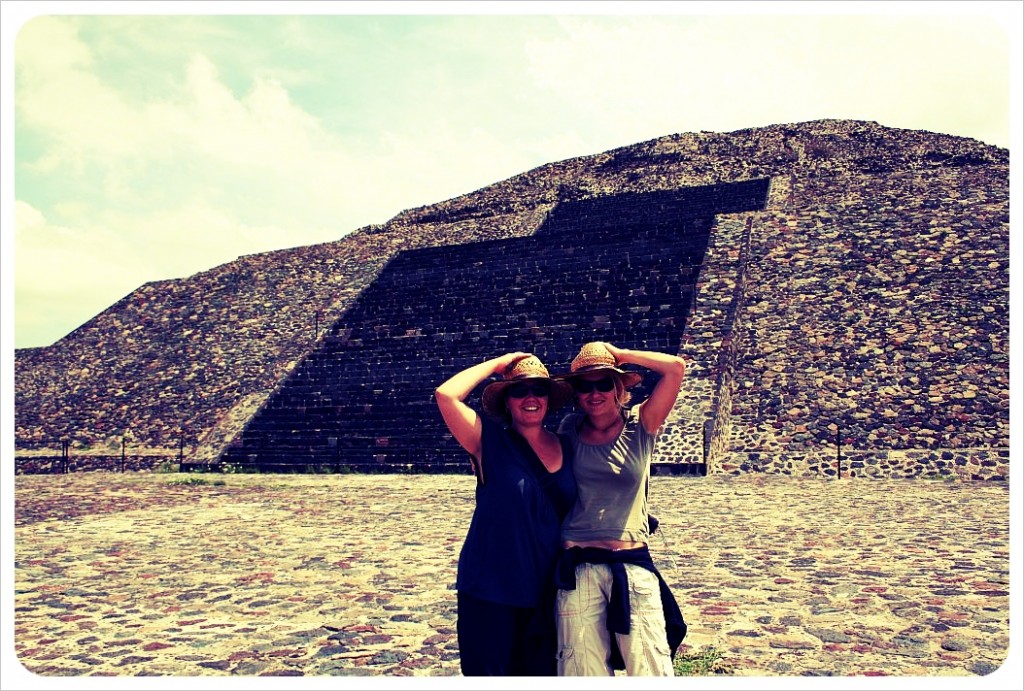 It is not to say that we find Mexicans friendlier than Americans. It just seems that the rent-a-car we drove for two months in the States may have afforded us freedom but also seems to have sheltered us from meeting more people. We definitely had our Thelma and Louise feeling a lot of the time in that car, but here in Mexico it is just us, our backpacks, and every form of public transportation imaginable. We have now taken subways, taxis (less than you would think) and ‘colectivos’ (small 20-seater buses), various types of long haul and overnight buses, three-wheeled mopeds (tuktuks), one very broken van converted into a bus (which took us 6 hours through the most winding, nausea-inducing road from Oaxaca to Pochutla) and camionetas (covered pick-up trucks) here on the coast. Who knows what other means of transport we will take, but we do know that the colourful ‘chicken buses’ (pimped out 30 year old American school buses) await us in Guatemala, Jess’s old stomping grounds. 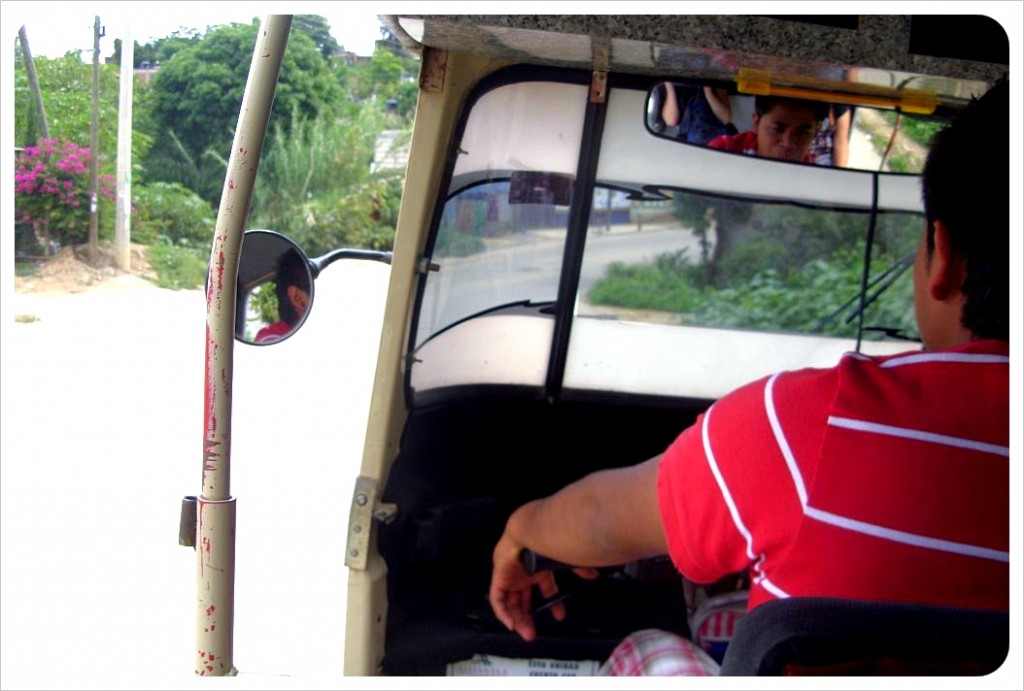 The luxury of having that car, was indeed just that – luxurious. We gave no thought to an extra ounce of weight. Downsizing to just the two backpacks during our last week in the U.S. was  the best thing we could have done. We are now acutely aware of the necessity of each item in our pack. Trudging up and down the streets or beach looking for a room with everything we own distributed between our shoulders means that we can only have with us exactly what we need and no more.

The first 100 days have taken us from the flash and glamor of Sin City, along the Pacific Coast and to the wide open spaces of the American Wild West, on down to the vibrant, buzzing city of Mexico D.F. and the lazy beaches of the Pacific coast. The next 100 will see us spend a month on the Yucatan, a trip through Belize and on to Guatemala, where Jess lived for two years. Bring it on, we can’t wait for our next 100 days! 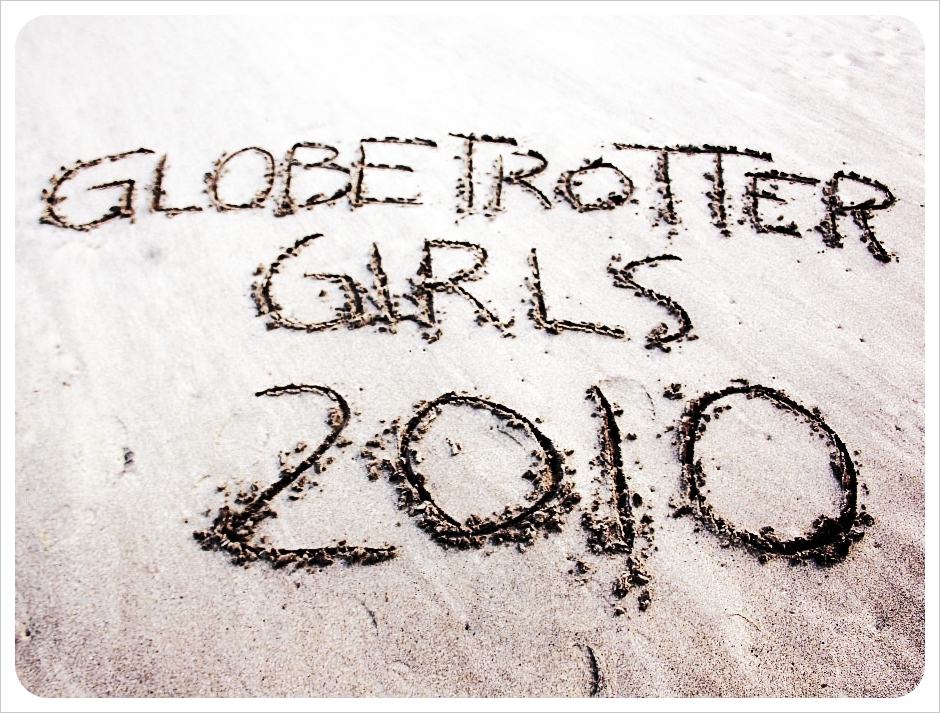 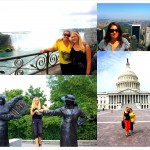 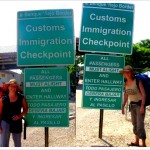 Reflections: 400 days on the road
Click here to cancel reply.

500 days on the road: Reflections on the last 100 days - GlobetrotterGirls

[…] was working my way up the corporate ladder, I had no idea I’d be watching the final games of the World Cup in 2010 in Mexico City, three months into what was supposed to be a one-year trip around the world. And then, I certainly […]

Polaroid of the week: Boy in Mazunte - GlobetrotterGirls

[…] through inland Mexico, we finally arrived at the coast last weekend where we celebrated our ‘100 days of travel‘ milestone. We stayed in Mazunte and Zipolite, two near-deserted but beautiful beach villages […]

The Tops and Flops of our first 100 days - GlobetrotterGirls

[…] our first 100 days of travel, which we spent in California, Arizona, Nevada and in Mexico, we have had some amazing ups and […]

[…] was working my way up the corporate ladder, I had no idea I’d be watching the final games of the World Cup in 2010 in Mexico City, three months into a one-year trip around the world. And then, I certainly didn’t think […]