It wasn’t Manhattan that made me fall for New York – it was Brooklyn that made me fall in love with the ‘Big Apple’. I had been to New York several times but it was in 2013, when I lived in Brooklyn for two months, that I fell so hard for the city that I decided I had to live in New York at some point in my life. While I had always enjoyed New York City tremendously on previous visits, it never felt like a place I’d want to call home – until the summer I spent in Brooklyn. Over the years, Brooklyn has become a place most people know is cool, trendy and ‘happening’ – and that you have to visit Brooklyn on a trip to New York – but most people don’t know where to start. If you want to get off the beaten path in New York City – you have to visit Brooklyn! If you still need some reasons to visit Brooklyn, or aren’t sure what the best places to visit in Brooklyn are? Then this article is for you: 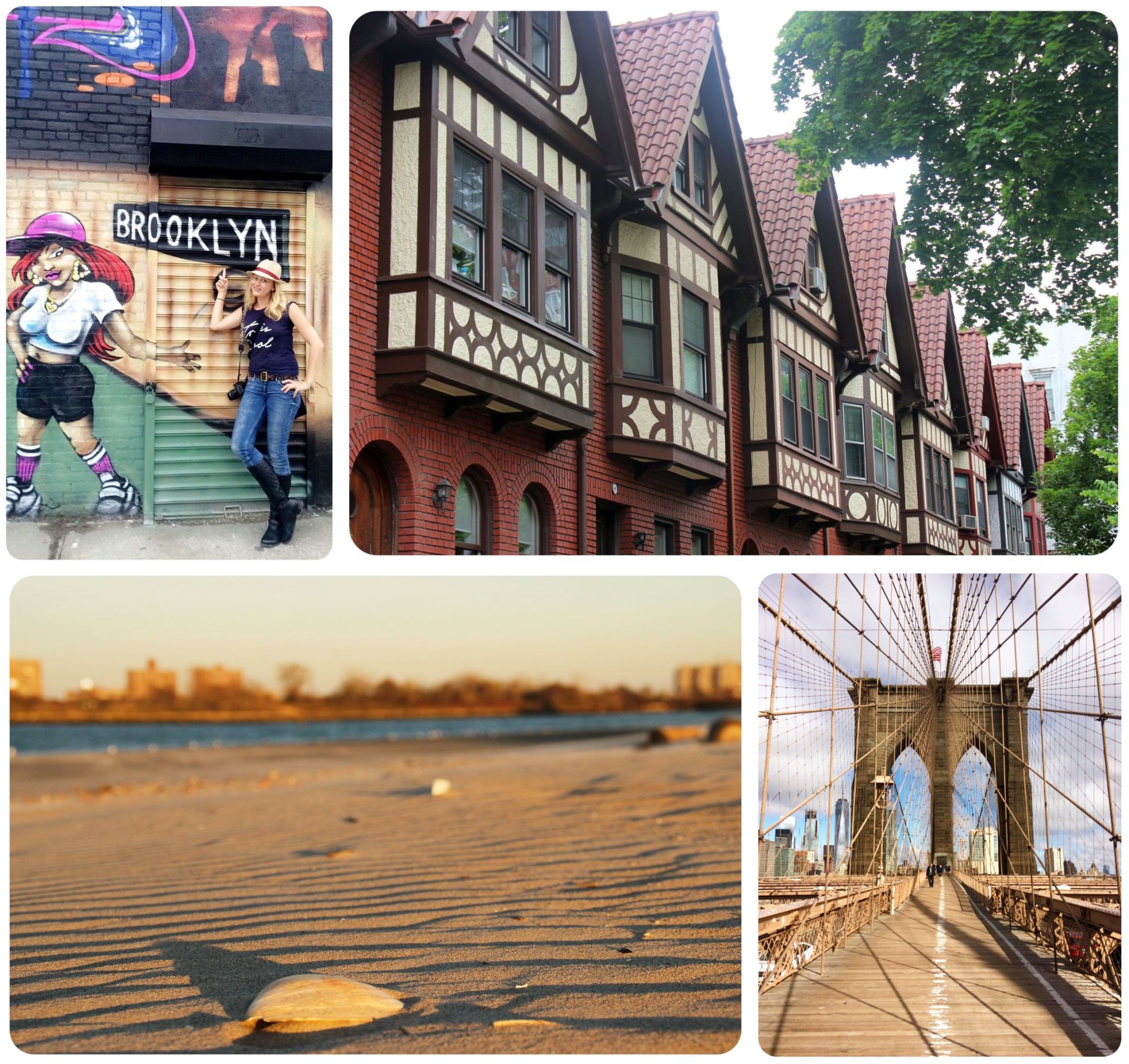 Since making Brooklyn my home a few years ago, I’ve spent countless months exploring this massive borough, and I’ve come to the conclusion that I’ll never be done exploring it – because there are so many different neighborhoods to see, cool spots to stumble upon and hidden gems to discover. So where to go in Brooklyn, and what to see in Brooklyn? Since the borough doesn’t have a lot of sights per se, it can be hard to figure out what the best places to visit in Brooklyn are.

You can check out my Brooklyn Walking Tours below, but let me take you on a virtual tour of Brooklyn and tell you all of the reasons why it’s well worth venturing into Brooklyn for a day while you’re visiting New York, and the best places to visit in Brooklyn:

It’s funny that most people who visit New York only set foot in one of the five boroughs – Manhattan – even though it is by size the smallest of them all, and by population the third smallest. Manhattan has a population of 1.6 million, the Bronx 1.4 million, and Staten Island just under half a million – even though by land area, it is more than twice as large as Manhattan (Manhattan is 22.83 sq miles, Staten Island 58.5 sq miles).

Brooklyn covers 71 sq miles, which is more than three times as big as Manhattan, so really, it’s impossible to overlook this giant borough. That’s why it is so hard to decide where to go in Brooklyn – without a plan, visiting Brooklyn can feel overwhelming. Brooklyn is also the most populous of the five boroughs, with over 2.6 million residents. 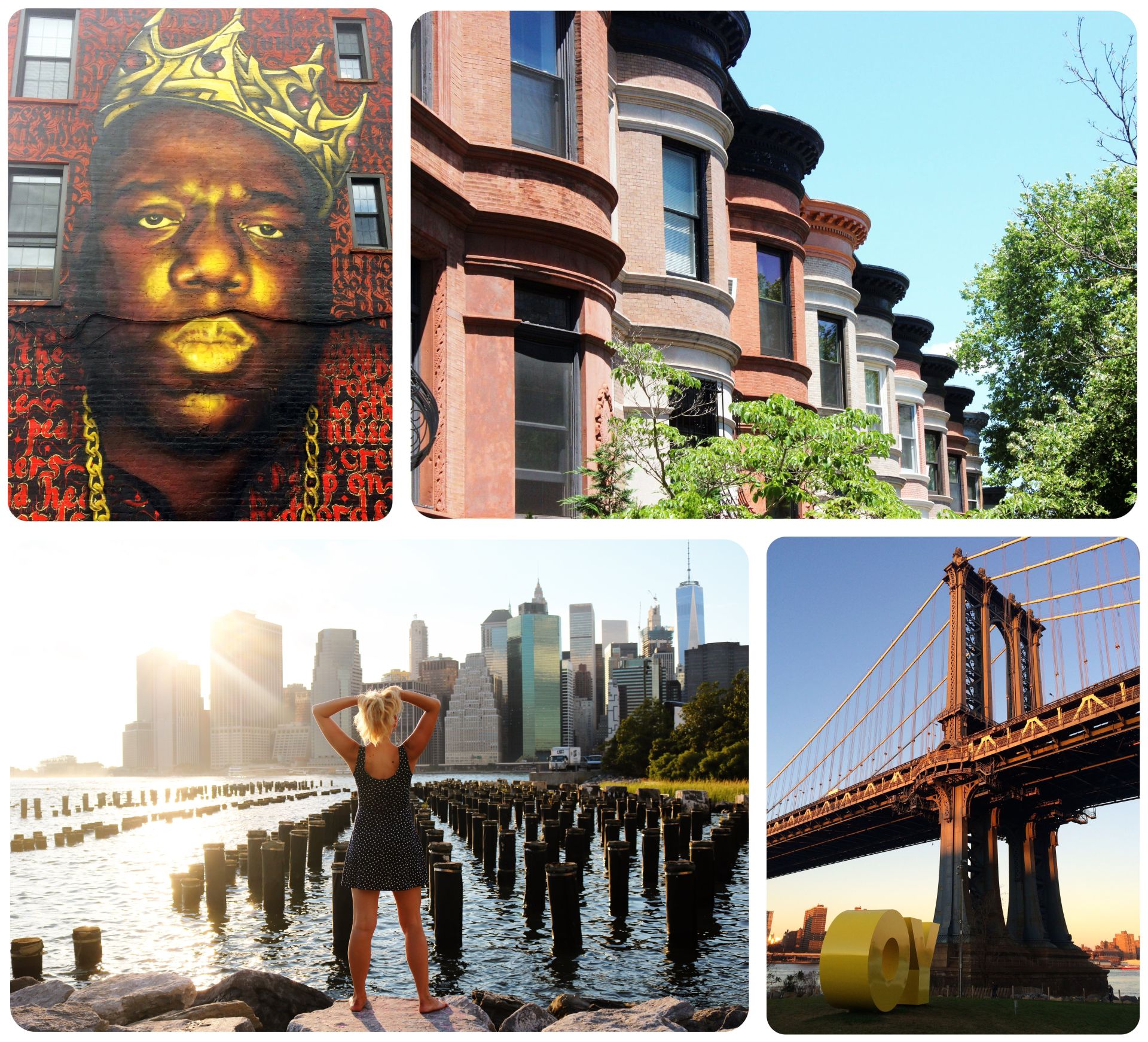 And you shouldn’t just visit Brooklyn for its vast size, but also for its many diverse neighborhoods. Here are just a few that I think are well worth a visit (two of them made it into my list of the Top Five Places In New York City Off The Beaten Path!)

I could go on and on, but you get the point: The list of best places to visit in Brooklyn is infinite. Brooklyn is so diverse and large that you could spend days just exploring this borough. There are well over 60 neighborhoods you could explore here! In fact, Brooklyn was its very own city until 1898, when it was annexed to New York City. 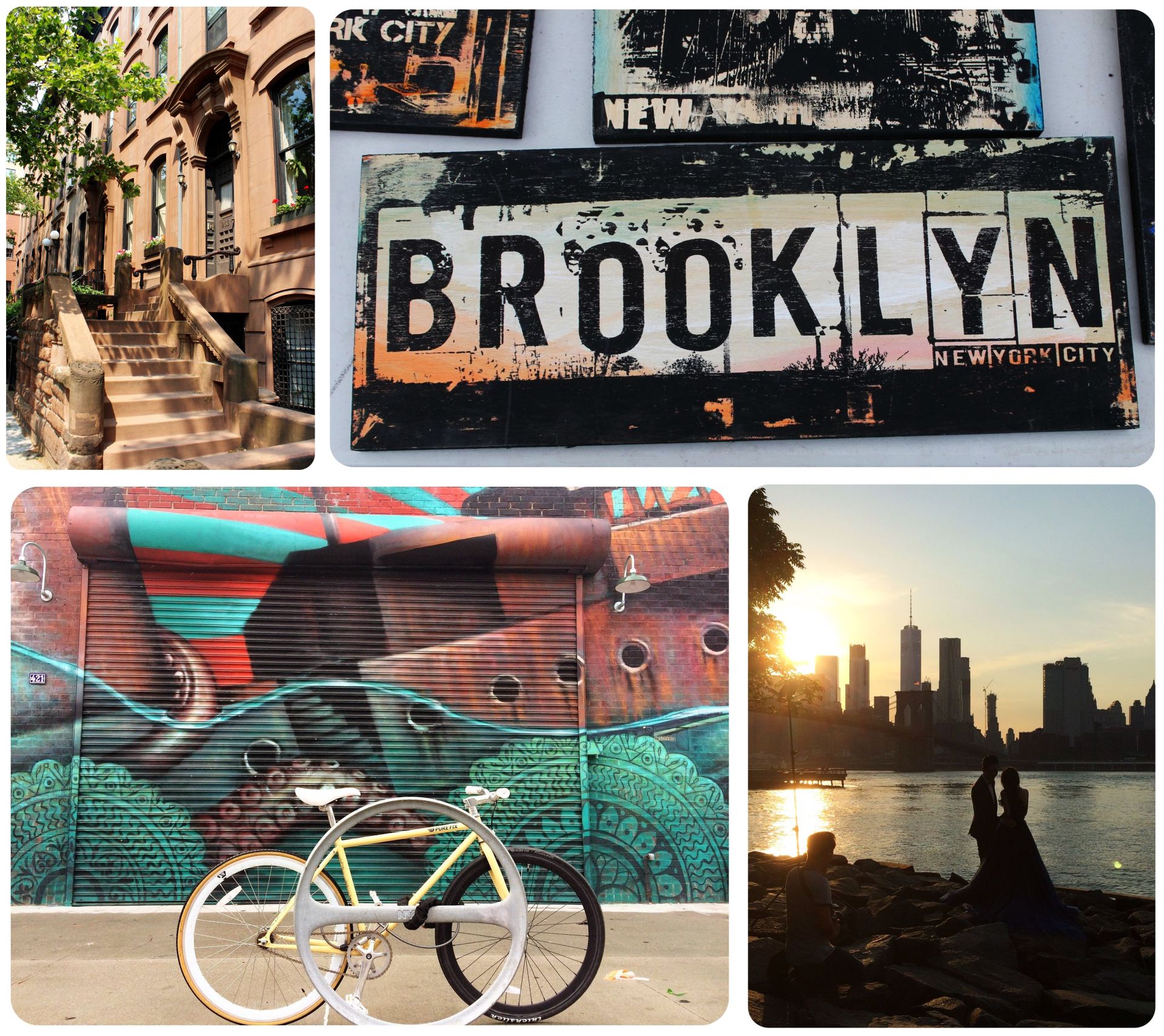 2 Brooklyn has some of New York’s best Food

Yes, Manhattan has an amazing restaurant scene and definitely beats Brooklyn when it comes to rooftop bars, but food is one of the best reasons to visit Brooklyn. Brooklyn is home to some of the city’s most iconic eateries. The borough’s dining scene has improved exponentially over the past few years and now almost every neighborhood has exceptional restaurants that are even attracting Manhattanites and visitors from all over. Here are some recommendations for places that are worth a trip to Brooklyn for:

Check out my complete list of the best markets in New York City here! 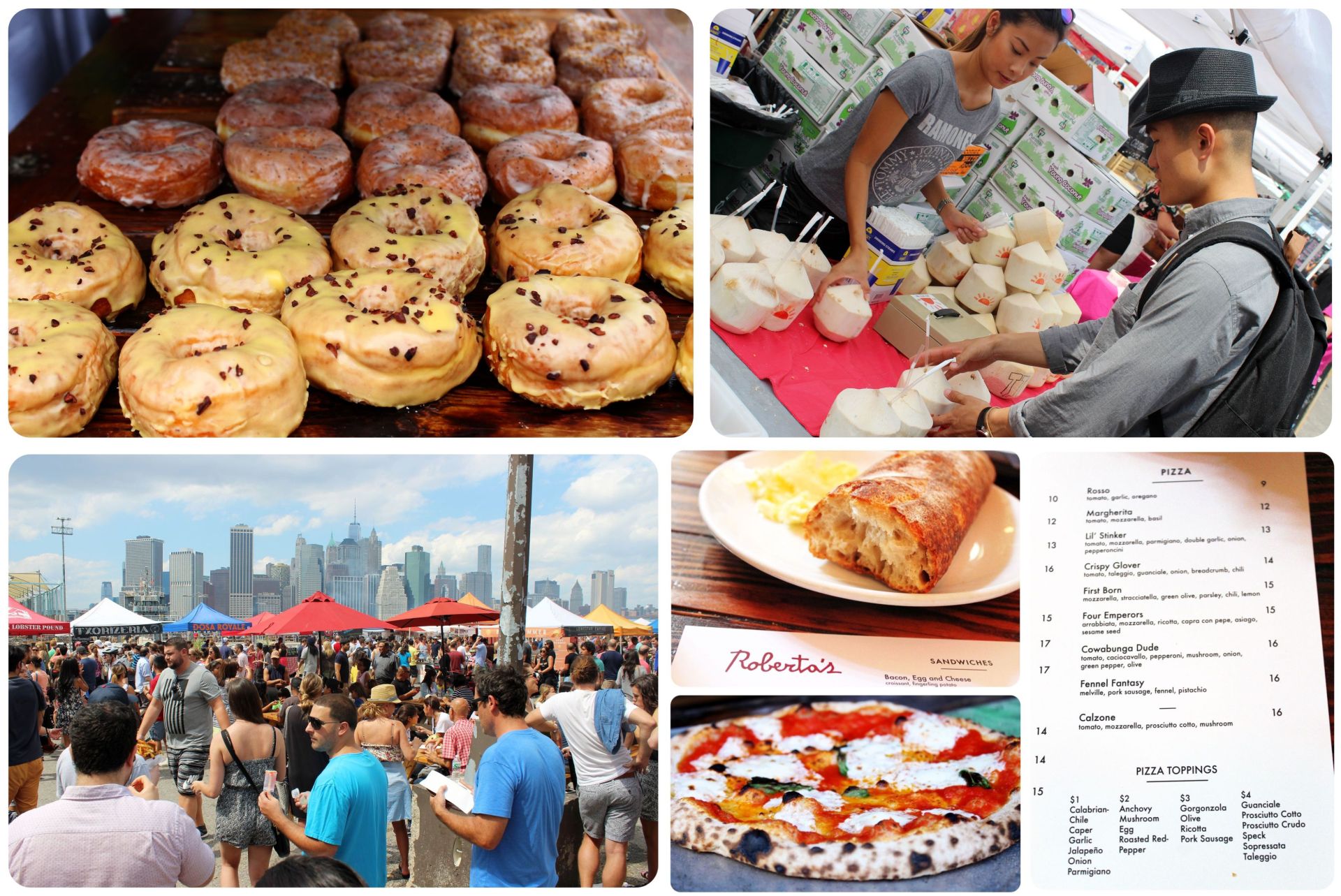 3 Brooklyn has amazing art and culture

Manhattan is famous for world-class museums such as the Met, the MoMA and the Guggenheim, but Brooklyn has plenty to offer for art lovers, too! The Brooklyn Museum is NYC’s third largest museum and holds an impressive 1.5 million pieces, and the fantastic Jewish Children Museum is the largest Jewish-themed museum of its kind in the entire U.S. – and not just enjoyable for children. Another cool museum in Brooklyn is the Transit Museum, which is located in a decommissioned subway station at the corner of Schermerhorn Street and Boerum Place in Downtown Brooklyn. 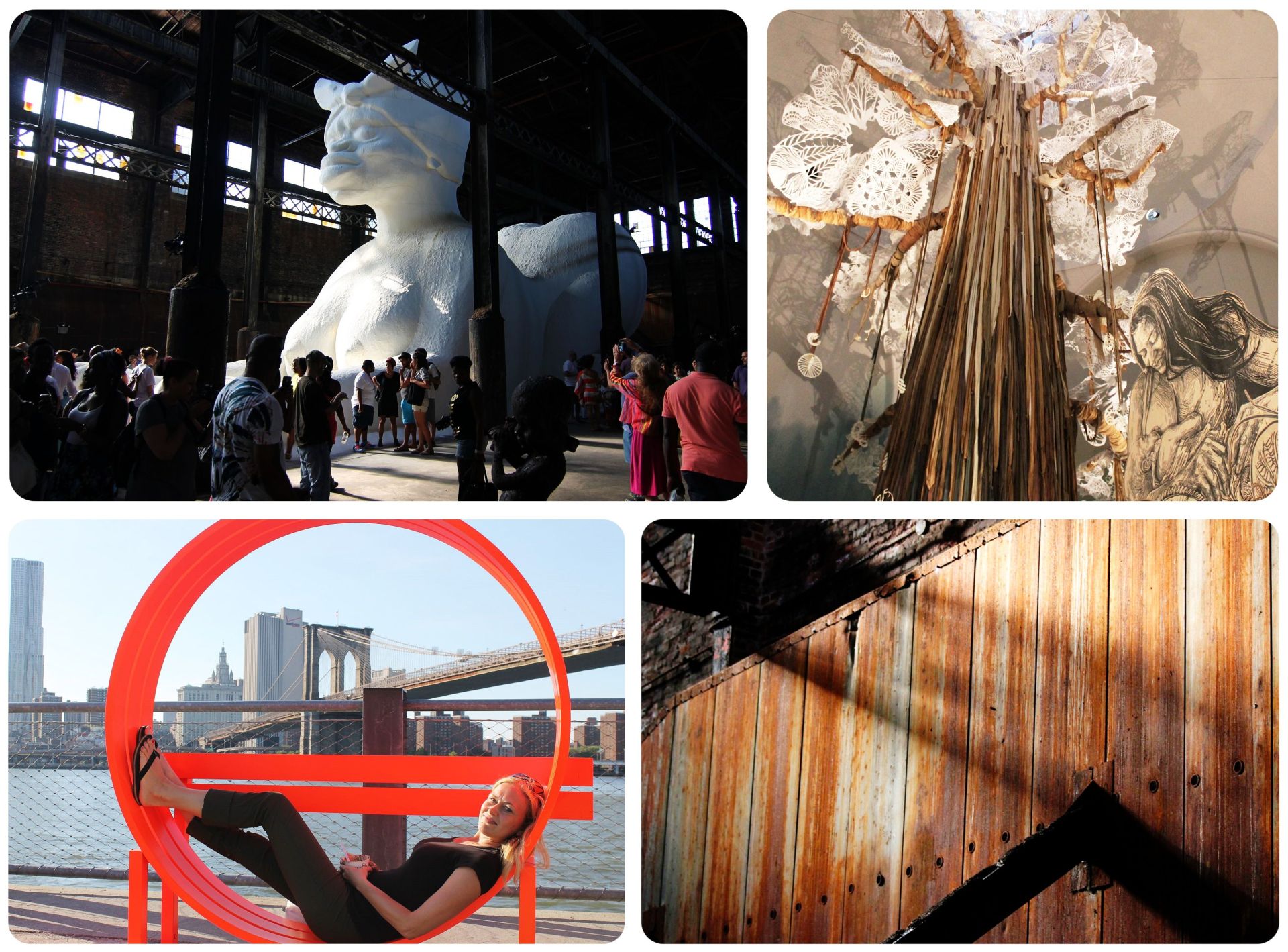 Culturists will love BAM, the Brooklyn Academy of Music, which is a performing arts venue that is famous for its cutting edge performances and indie movies at the BAM Rose Cinemas. Check out the BAM schedule before your visit.

Architecture buffs will want to explore a number of neighborhoods in Brooklyn – especially if you want to see the classic Brooklyn Brownstones and historic architecture. The best places to visit in Brooklyn to see architectural gems are: historic Prospect Lefferts Gardens which has incredible examples of neo-Renaissance, Tudor, Romanesque Revival and neo-Federal architecture, all in one neighborhood. If you want to check out this unique historic neighborhood on a self-guided walking tour, make sure to check out the historic limestones on Maple St (between Bedford Ave and Rogers), the newly land-marked Tudor houses in Chester Court, the oldest home in the district on Midwood Street and Bedford Avenue, the wood-framed houses on Lincoln Road and the Alex Hedman houses on Rutland Road.

Also don’t miss Park Slope, where you find Brownstones built between the 1860s and 1920s, and homes in Romanesque Revival, Italianate, Greek Revival and other significant architectural styles. Here is an excellent self-guided walking tour of Park Slope, which can be combined with a stroll of Prospect Park (Brooklyn’s answer to Manhattan’s Central Park).

Brooklyn Heights is the best place to visit in Brooklyn if you want to see the grandest historic mansions in the borough, and all the architectural styles you can see in the neighborhoods above, plus beautiful examples of Queen Anne, Beau Art and Victorian Gothic homes, cobble stone streets and charming carriage houses tucked away in hidden lanes. 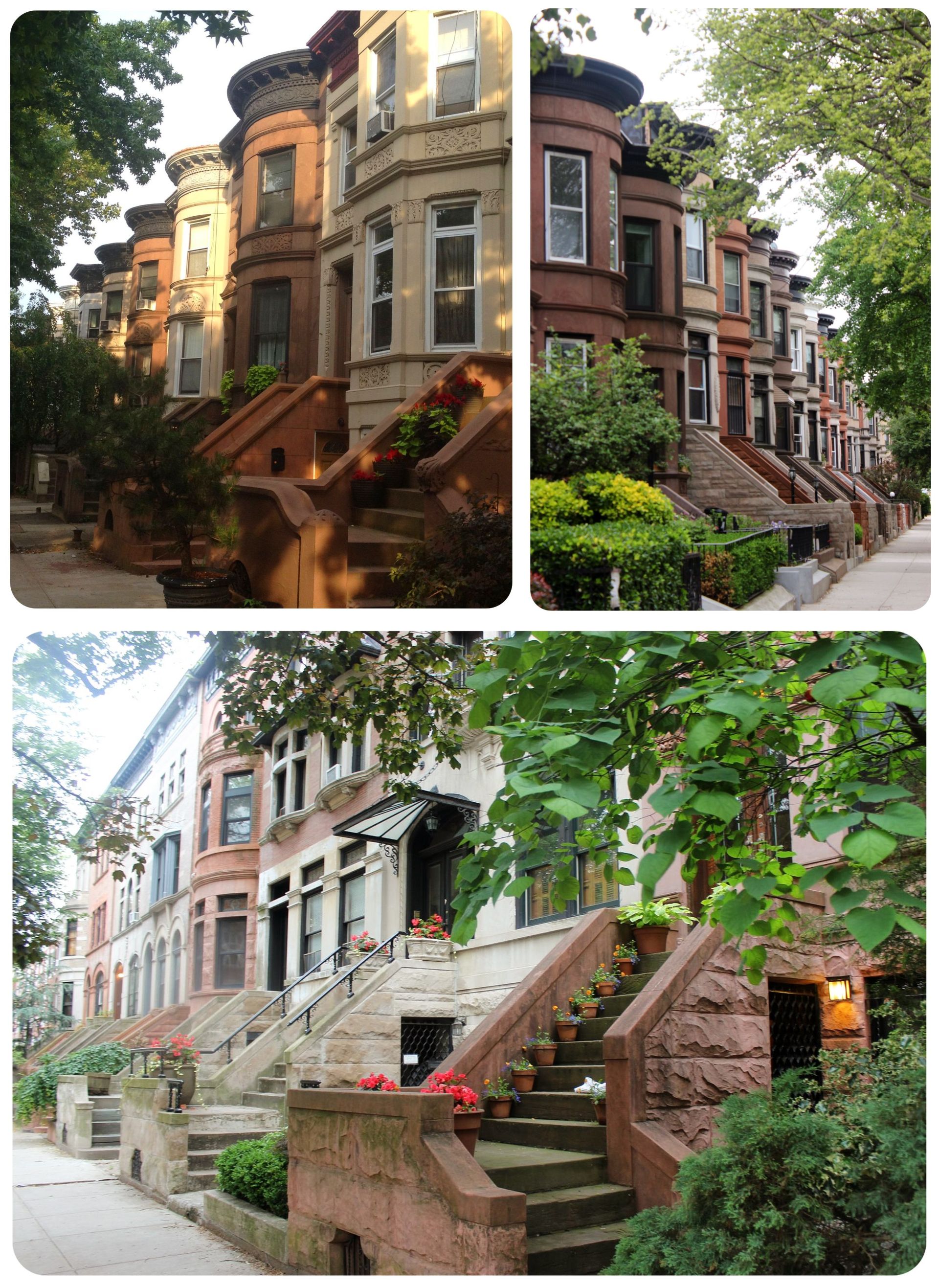 4 Brooklyn has the best street art in New York

Brooklyn, on the other hand, has several neighborhoods filled with amazing murals. One of the best places to visit in Brooklyn to see street art is Bushwick. The Bushwick Collective, a conglomerate of street artists, made it their goal to transform the neighborhood with its formerly grey and ugly warehouses into a colorful outdoor art gallery. They have attracted street artists from all over the world, and the exhibits are changing all the time. Troutman Street is one of the most colorful streets in Bushwick, but there is also great street art to be found in the streets around there (Jefferson Str, Knickerbocker Ave, St Nicholas Ave, Wyckoff Ave; and nearby Grattan St, Thames St and Harrison Pl, plus the cross streets between them)

Another great Brooklyn neighborhood for street art is Williamsburg. This article has the exact spots of some of the best pieces in the neighborhood, including pieces by Kobra, Roa, Faith 47, Mr Brainwash and Icy & Sot. If you just want to wander the neighborhood and see what murals you come across, head north on Wythe Ave towards 15th Street, or south on Kent (south of Metropolitan Ave). 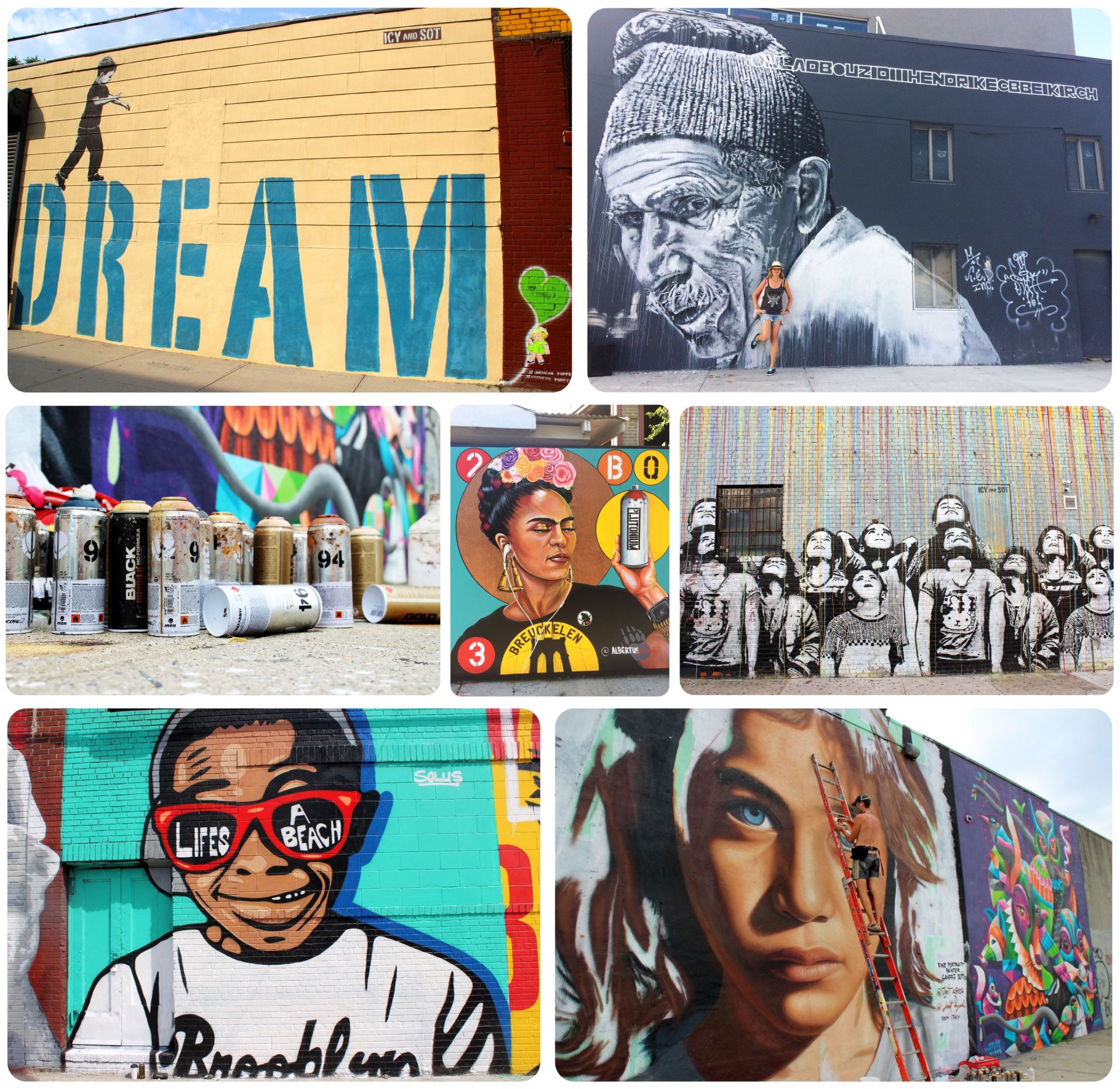 5 Brooklyn offers the most epic views over Manhattan

What does Manhattan not have? Panoramic views over Manhattan! And those views make for the best photos. And guess where you can find the most epic Manhattan vistas? That’s right, in Brooklyn. The views alone are one of the best reasons to visit Brooklyn, ideally by crossing one of the bridges to Brooklyn (and honestly, crossing the Brooklyn Bridge is one of the most scenic walks in NYC). You can combine taking in the views with exploring the neighborhood around there. It’s kinda ironic that some of the best places to visit in Brooklyn are places that offer great Manhattan views, but let’s be honest: none of the other boroughs beats Brooklyn when it comes to panoramic skyline views – including Manhattan itself!

These are the three best places to visit in Brooklyn for Manhattan skyline views, and one thing you can combine each visit with:

Pebble Beach, a small beach perched right in between the Brooklyn Bridge and the Manhattan Bridge. Grab a coffee at the Brooklyn Roasting Company in Dumbo (45 Washington St) and an almond croissant at Almondine Bakery (85 Water St) and take in the views for a bit.

East River State Park in Williamsburg: This one is best visited on a Saturday, when from March to October, the popular Smorgasburg food market takes place right in the park, next to a tiny stretch of sand beach on the East River. If you’re visiting on a weekday, go on a Williamsburg vintage shopping tour or stop at The Ides rooftop bar (at the Wythe Hotel) for even better views, or go on a pizza-themed walking tour of the neighborhood – you should grab a slice at Joe’s Pizza (216 Bedford Ave), Best Pizza (33 Havemeyer St) and Vinnie’s Pizza (148 Bedford Ave).

The Brooklyn Heights Promenade – I love watching the sunset on the promenade high over Brooklyn Bridge Park – which is directly on the waterfront and adjacent to the picturesque Brooklyn Heights neighborhood. You could combine a visit with a neighborhood stroll (don’t miss Joralemon Street, in my opinion the prettiest street in the hood) or a stop at the Brooklyn Cat Café on Montague Street.

Check out my list of places for the best views over Manhattan here. 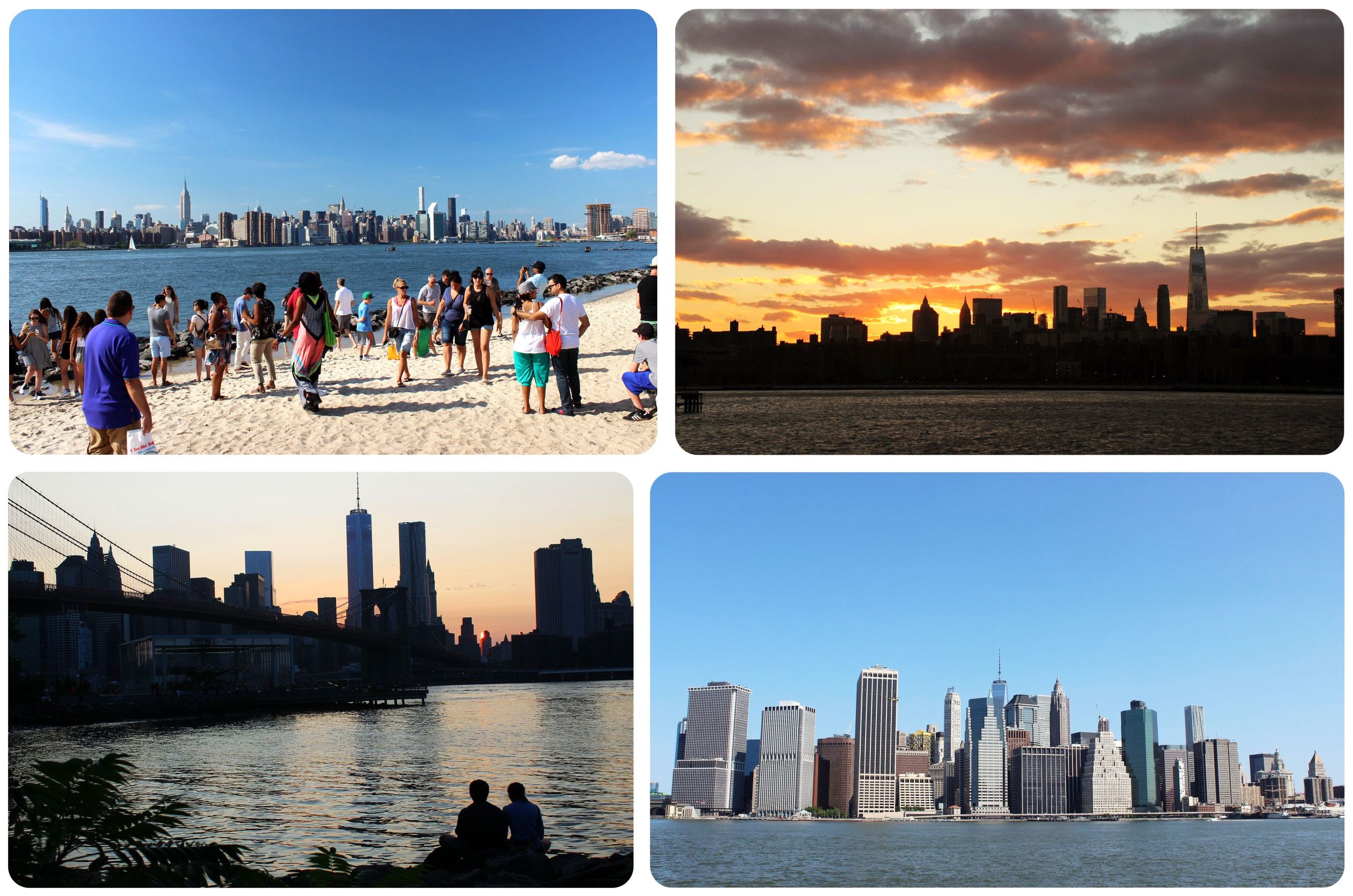 6 Visit The Best Places In Brooklyn With Me!

If you’re still not convinced and you need more reasons to visit Brooklyn, here’s an extra reason: why don’t you let me show you Brooklyn? Naturally, I cannot finish this article without plugging the Brooklyn Walking Tours I personally designed. On my tours, I introduce my guests to five very different parts of Brooklyn in half a day, giving them a solid overview of Brooklyn while showing them how diverse this huge borough is. I know that it can be overwhelming to look at a map to decide where to go in Brooklyn, which is why included the best places to visit in Brooklyn in my tour. I feel like people are missing out on such a big part of New York when they never leave the tiny island named Manhattan – you should at least add a couple of stops outside of Manhattan to your itinerary. You can learn more about my Brooklyn Walking Tour here. 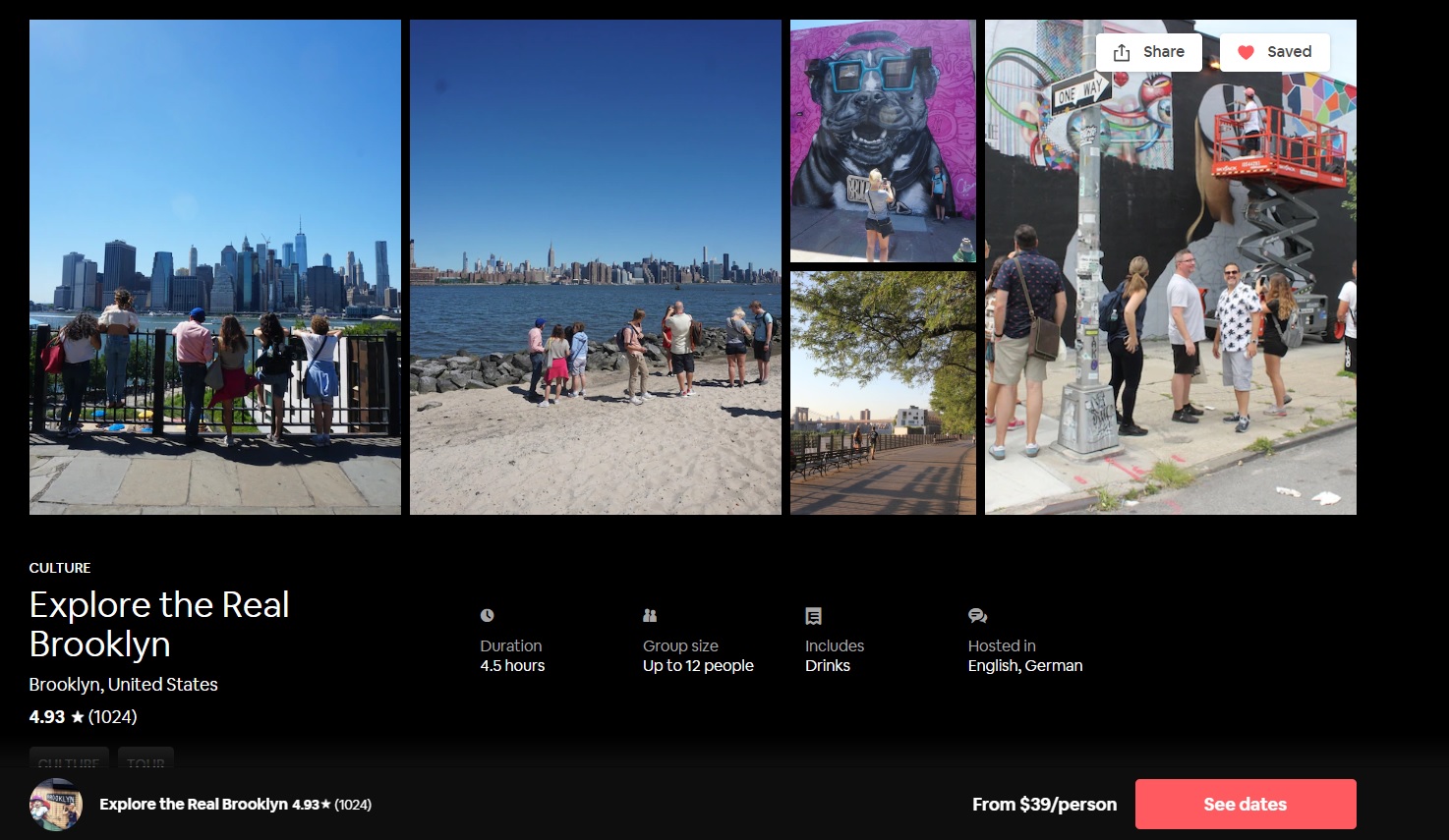