There is no better way to absorb the essence of a city than to visit its markets, and it doesn’t much matter if those are flea markets, ordinary fruit and vegetable markets or those meant to sell cheap trinkets to tourists. There is just something about strolling past the stalls, taking in the energy of buyers and sellers, the different languages, smells, foods, the local handicrafts, clothes, antiques and souvenirs. Some markets have a real sense of purpose while others just seem like fun cultural experiences. As huge lovers of markets, naturally we researched what New York has to offer in terms of markets and set out to discover them all and eventually declare what are – in our opinion – the best markets in New York City.

New York City has dozens of weekly markets, seasonal fairs and flea markets to choose from and, as is our custom, much of our time in the Big Apple was spent checking out all of the New York City flea markets and food markets. If you’re headed to New York and are looking for a way to soak up the city, our detailed list of the markets in New York City (plus two honorary mentions) is a great place to start: 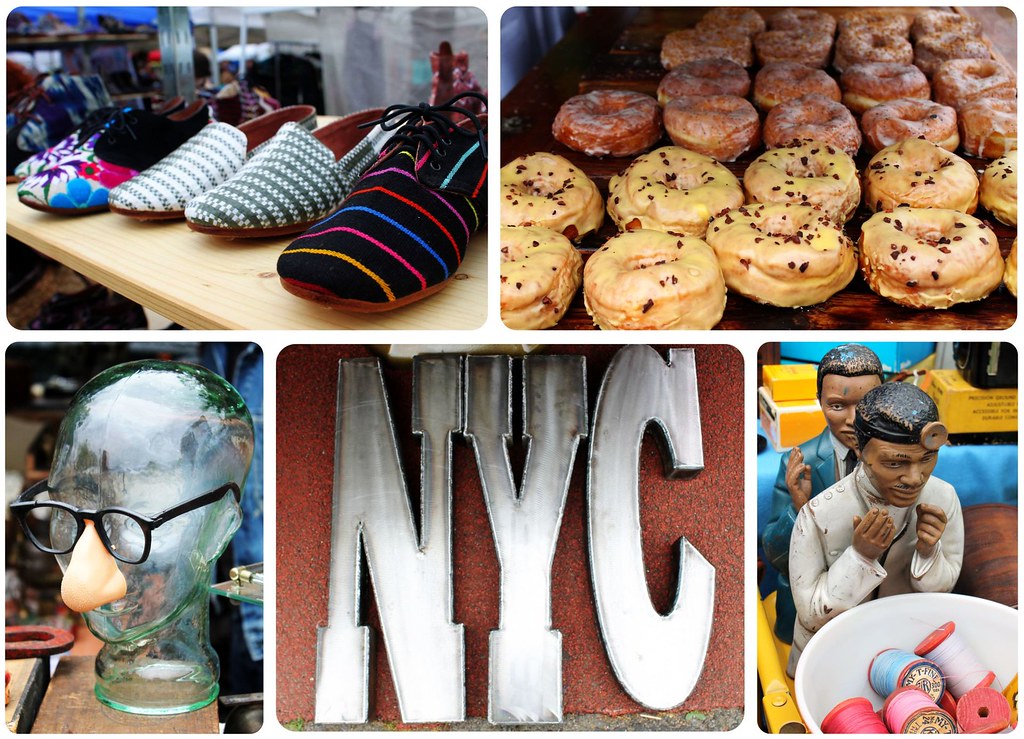 Set right on Union Square, this market has some of Broadway’s most historic buildings as its backdrop. Union Square Greenmarket is a paradise for health-conscious eaters – with locally made yogurt and honey, grass fed beef, organic fruits and vegetables, artisan breads and vegan muffins. If you come in the afternoon before the market shuts down, you’ll be able to find some of the best deals. Obviously, the variety of produce is much bigger in the summer and fall months, but the market is open year-round. When the Greenmarket initiative started in 1976, there were only 12 farmers – today, there are over 230 farmers who belong to the Greenmarket network, the biggest farmers market network in the US which has 54 markets in New York City alone. Union Square Greenmarket even made CNN’s Top Ten Fresh Markets In The World. 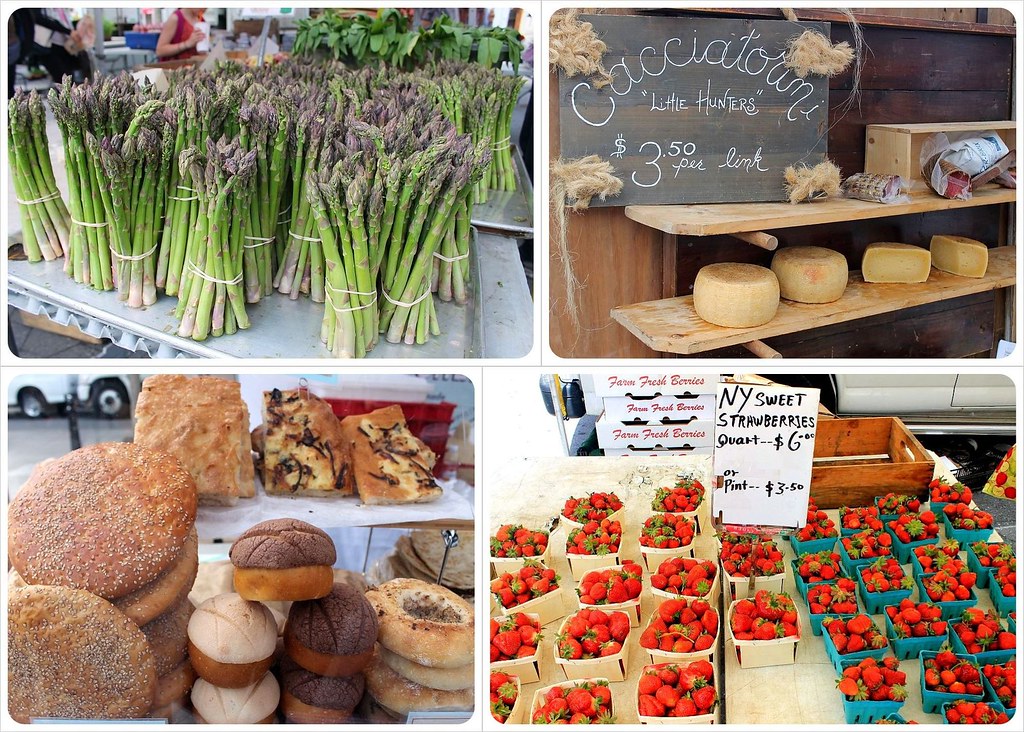 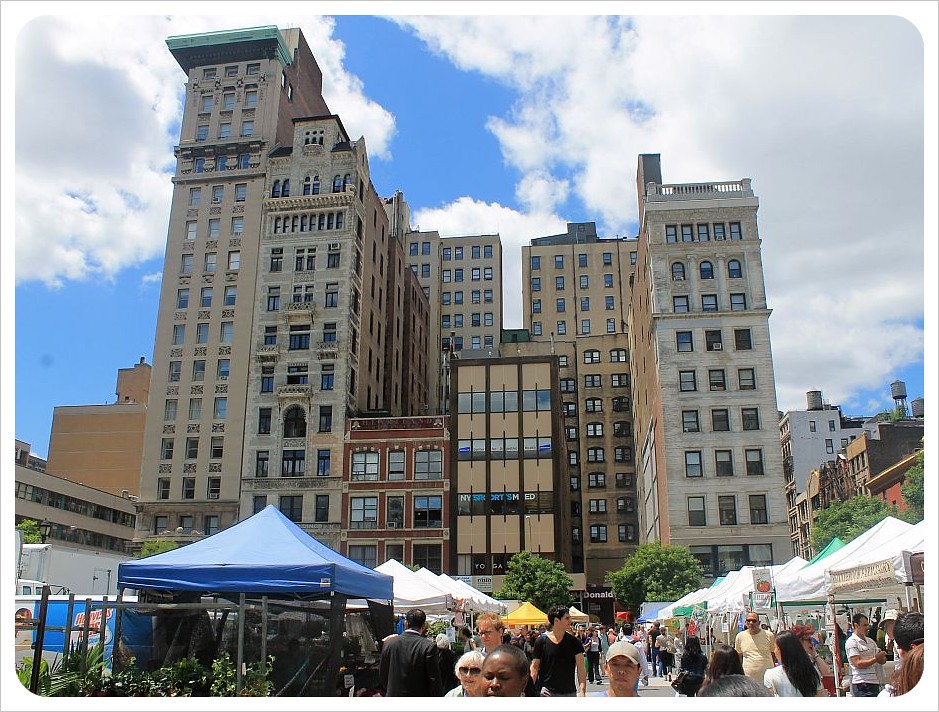 Brooklyn Flea is a sprawling flea market that takes place every Sunday in Dumbo, right under the Manhattan Bridge, rain or shine. There is a (considerably!) smaller version on Saturdays in Williamsburg (see below) but I prefer the Sunday Flea in Dumbo. There are dozens of antiques and second-hand stalls selling everything from kitschy ceramic owls and in-your-face reminders of a segregated past to up-and-coming furniture dealers and trend-setting jewelry makers. There are also some food vendors – including famous Brooklyn donuts by Dough – but if you’re hungry, there is also plenty of good food nearby, for example TimeOut Market, where you find 21 restaurants under one roof. 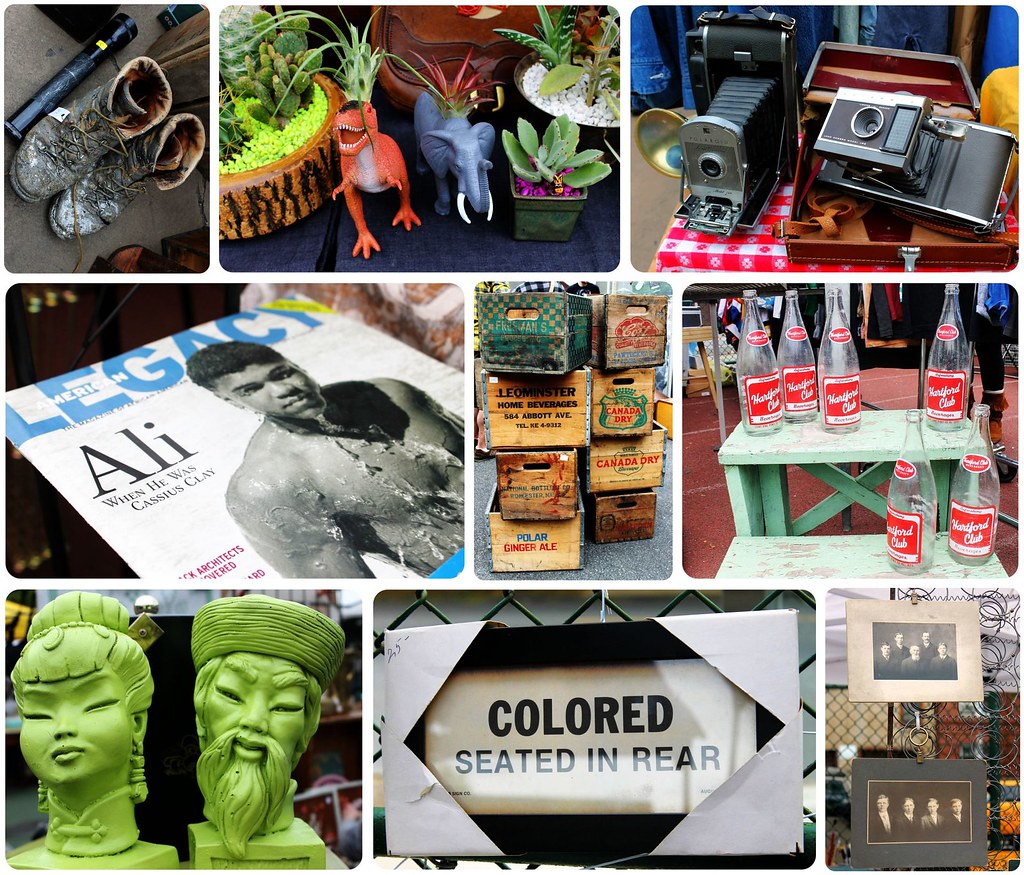 If you weren’t sure if you should head to Brooklyn on your trip to New York – the Dumbo flea market and a stroll through the surrounding waterfront neighborhood are a perfect reason to visit Brooklyn.

Details: Every Saturday from 10am to 5pm at 80 Pearl St. / Manhattan Bridge Archway, Brooklyn, NY 11201 (Subway: York Street on the F Train) 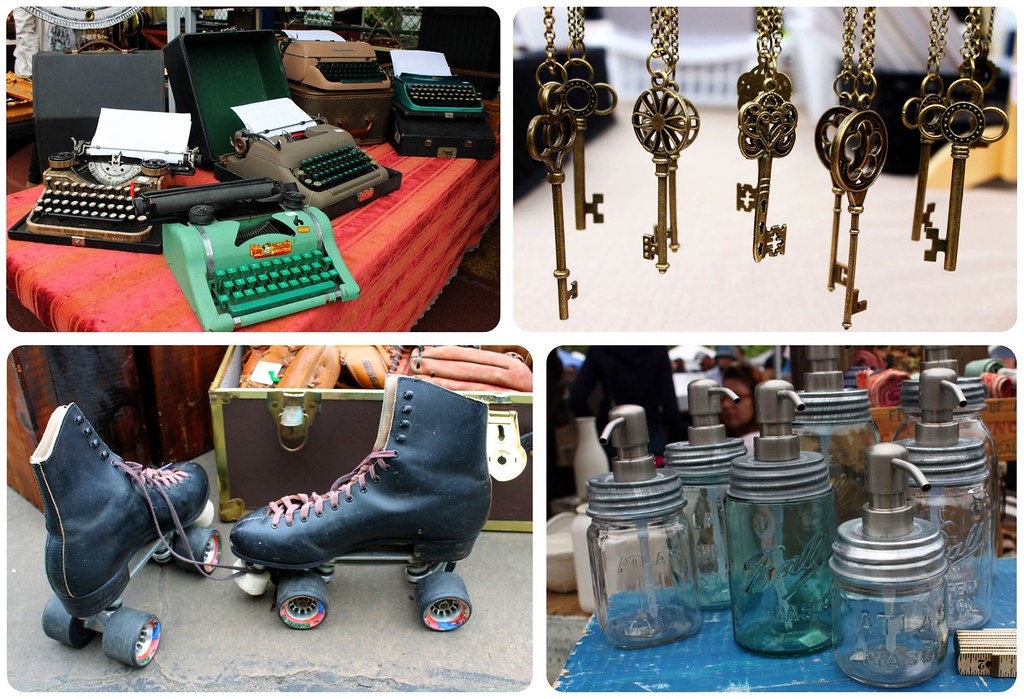 The Williamsburg Flea Market is an offshoot of the Brooklyn Flea, taking place on Saturdays at the corner of Kent Ave and N 6th Street. The vendors – some of which also sell at the Sunday market in Dumbo – offer antiques, vintage, furniture, unique Brooklyn-made clothes, distinct indie fashion, memorabilia and jewelry. The advantage of the Williamsburg Flea is that you can combine it with a visit of Artists & Fleas AND the Smorgasburg food market (see below). 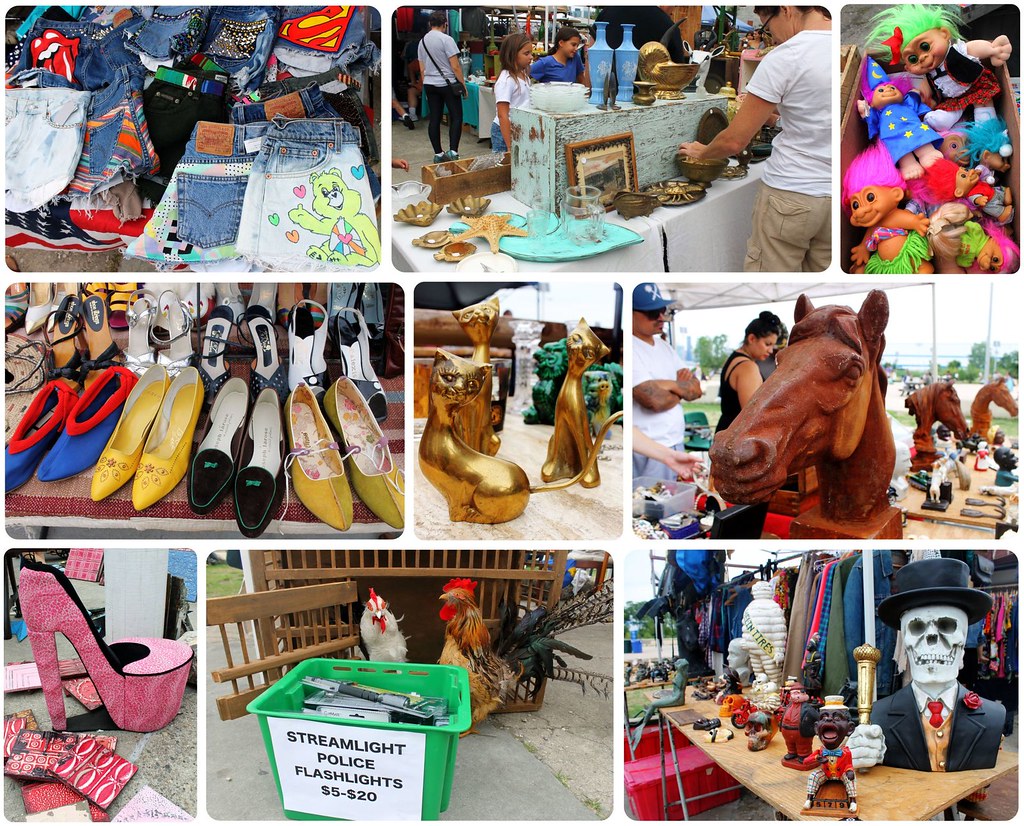 Just around the corner from the Brooklyn Flea is the indoor Artists & Fleas market. When it opened in 2003, it did so in an old warehouse on what was a neglected part of North 6th Street, before Williamsburg’s popularity exploded shortly after. Open on Saturdays AND Sundays, this is the best place to come for everything from creative inspiration to furnishing your new apartment. Here you will find paintings and photography by local artists, antique books, jewelry handmade out of just about any material – and the same goes for furniture and other accessories. 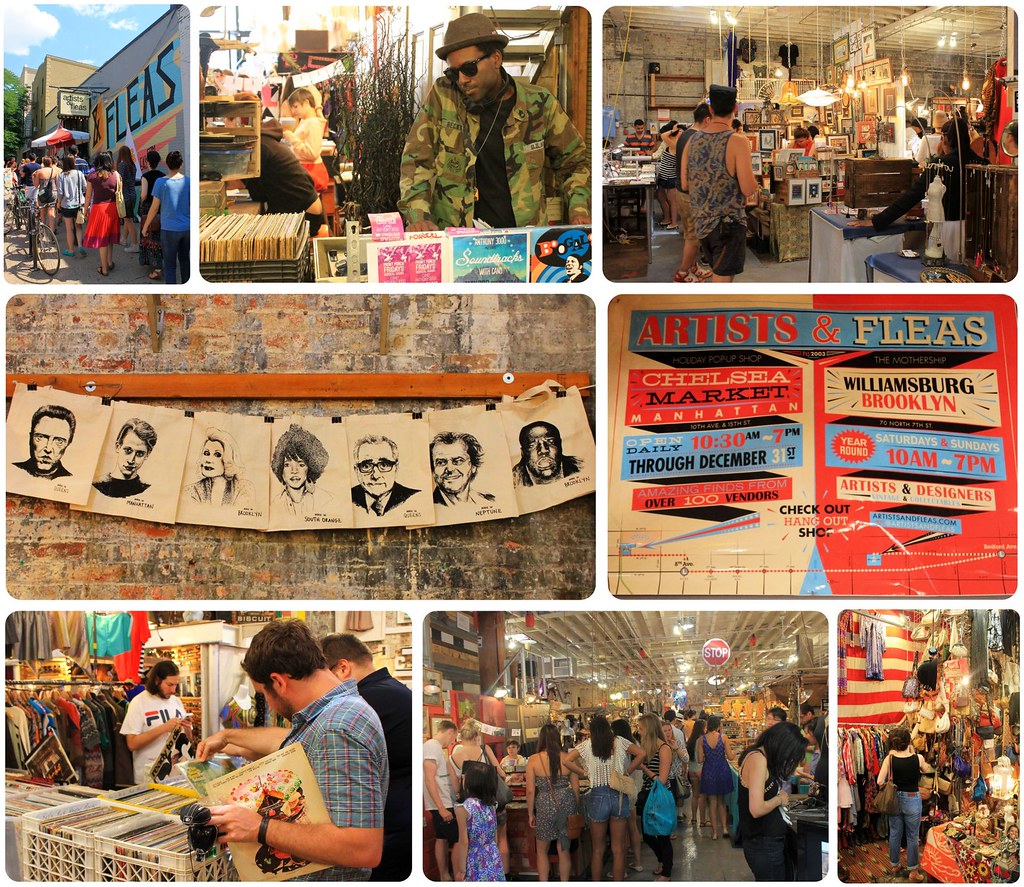 Details: Williamsburg Flea is open on Sundays from 10am to 5pm from April to October at Kent Ave and N. 6th St in Williamsburg. Closest subway stop: Bedford Avenue (L Train) or you can take the East River Ferry to North Williamsburg – the ferry dock is a short five-minute walk away.

Tip: If you are visiting New York in the winter, there is a ‘Winter Flea’ in Williamsburg at 25 Kent Ave. (8th Floor). This is a combined version of the two most popular weekend markets in New York City, the Brooklyn Flea and the Smorgasburg food market. It’s open from late November to early April every Saturday and Sunday from 10am to 5pm. You’ll find around 60 vendors selling vintage, furniture, collectibles and antiques, jewelry, art and crafts from local artisans and designers as well as 15 to 20 vendors that sell food.

We made the rounds of the city’s markets, so several of the stalls at the Chelsea Flea were familiar by the time we made it there. The location is great and the market was relatively empty considering its Midtown Manhattan location, within walking distance to Times Square. This market is a paradise for collectors of antiques, vintage clothes, oddball memorabilia, retro items, jewelry, furniture and its rumored that many set designers and props masters come here to source decorations and furniture for Broadway and Off Broadway shows. The only thing that is missing is a line of food stalls, but since Hell’s Kitchen is a hub for great food, that didn’t really affect us much at all. The Hell’s Kitchen Flea Market was actually named one of the Top Ten Shopping Streets in the World by National Geographic and if you have time to visit only one, then should be the New York City flea market you should visit. 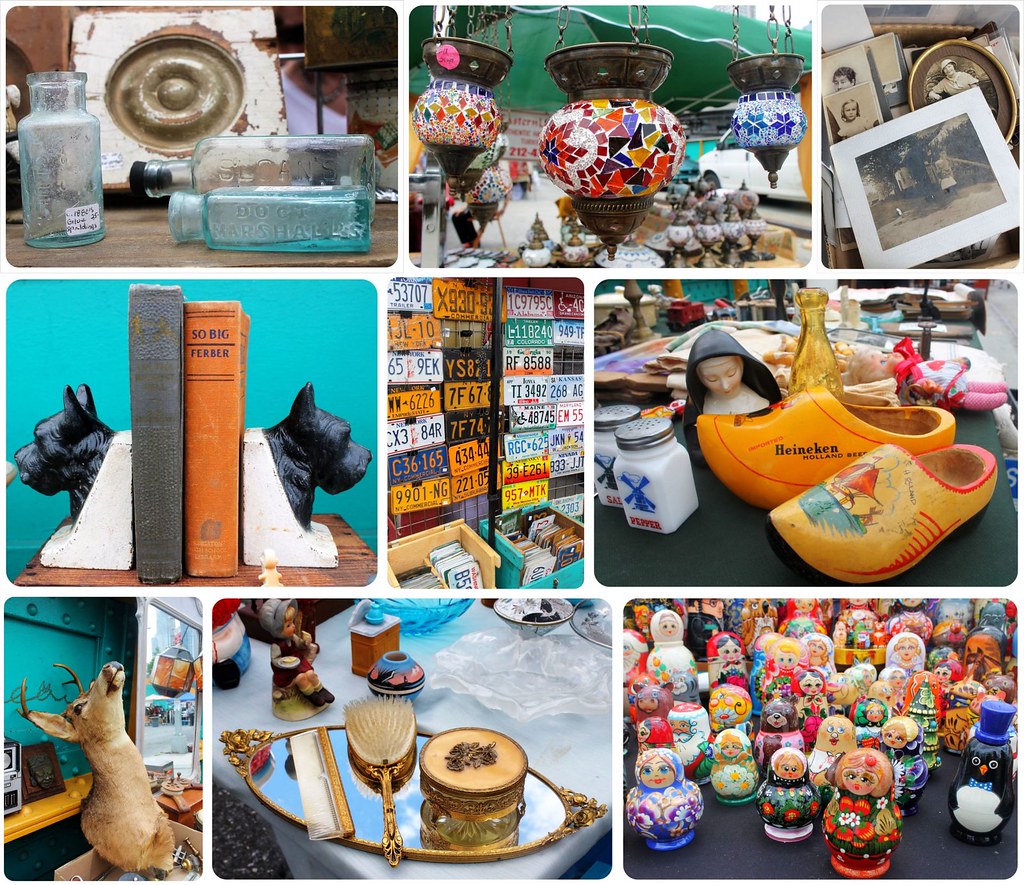 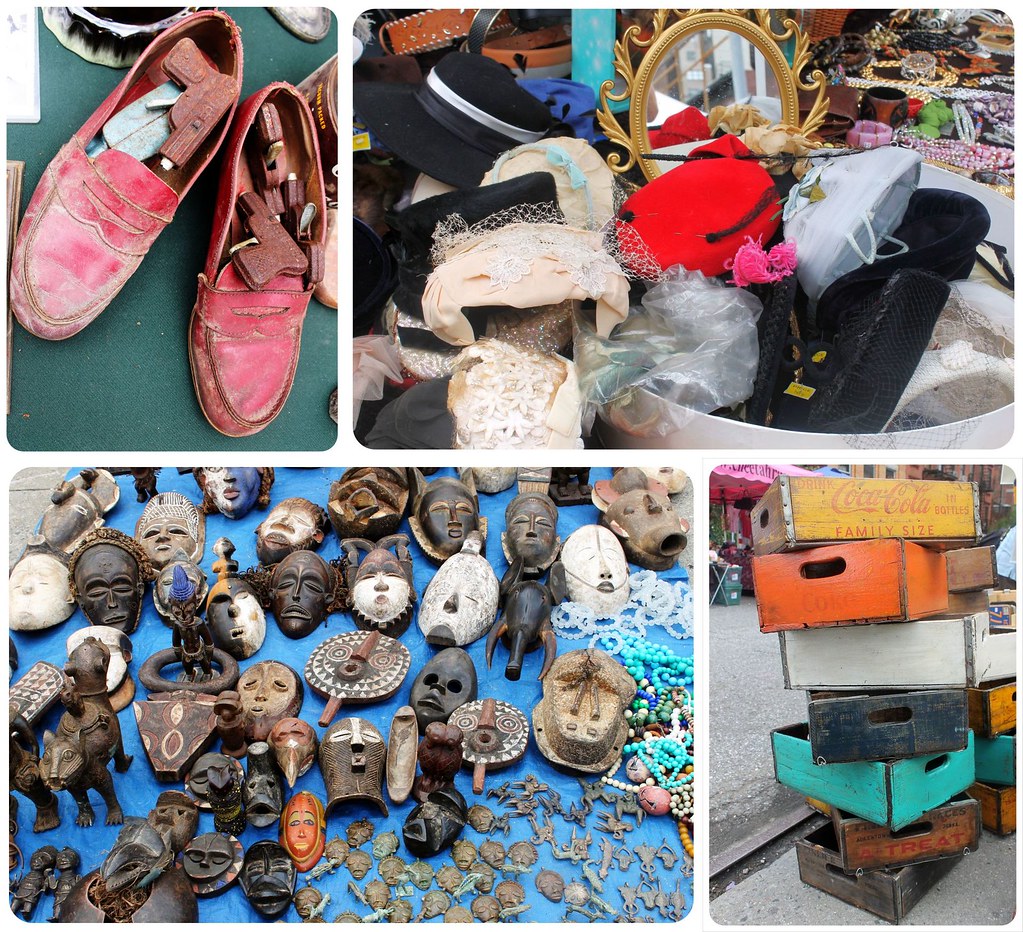 Our absolute favorite market is Smorgasburg, a food market right on the East River (on the Brooklyn side). Like the Williamsburg Flea, Smorgasburg also belongs under the Brooklyn Flea umbrella. There are two – Saturdays in Williamsburg and Sundays in Prospect Park. Both are worth a visit, since they feel very different. The Saturday market is usually much more crowded because of its location in the trendy Williamsburg – you’ll see a lot of hipsters here – while the Sunday market in the park feels more relaxed and attracts a different clientele. One thing that the Saturday market has that the Sunday edition can’t compete with: One of the best views over the Manhattan skyline! 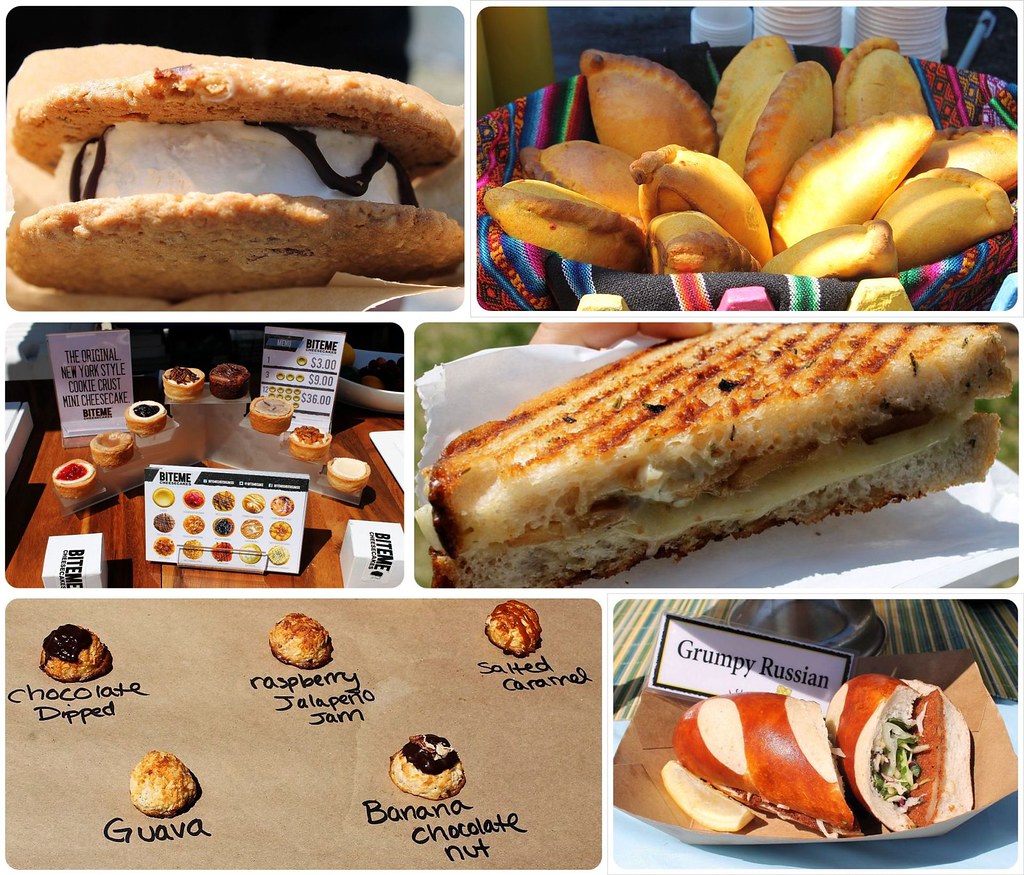 Here you can grab a fresh-made pizza, Bolivian empanadas, raw vegan food, ice cream, coffee, Vietnamese street food, Mexican tacos or anything you could possibly think up and then sit down right in East River State Park or at the small beach, looking right out at the Manhattan skyline. Foodies love offering food from all over the world and classic American grub like burgers and grilled cheese. Many famous New York eateries sell here, like the Red Hook Lobster Pound, Blue Bottle Coffee, The Meat Hook, People’s Pops popsicles, McClure’s Pickles, and many more. Come early though, or you’ll face long lines and crowded tables. Top tip: Definitely come hungry! 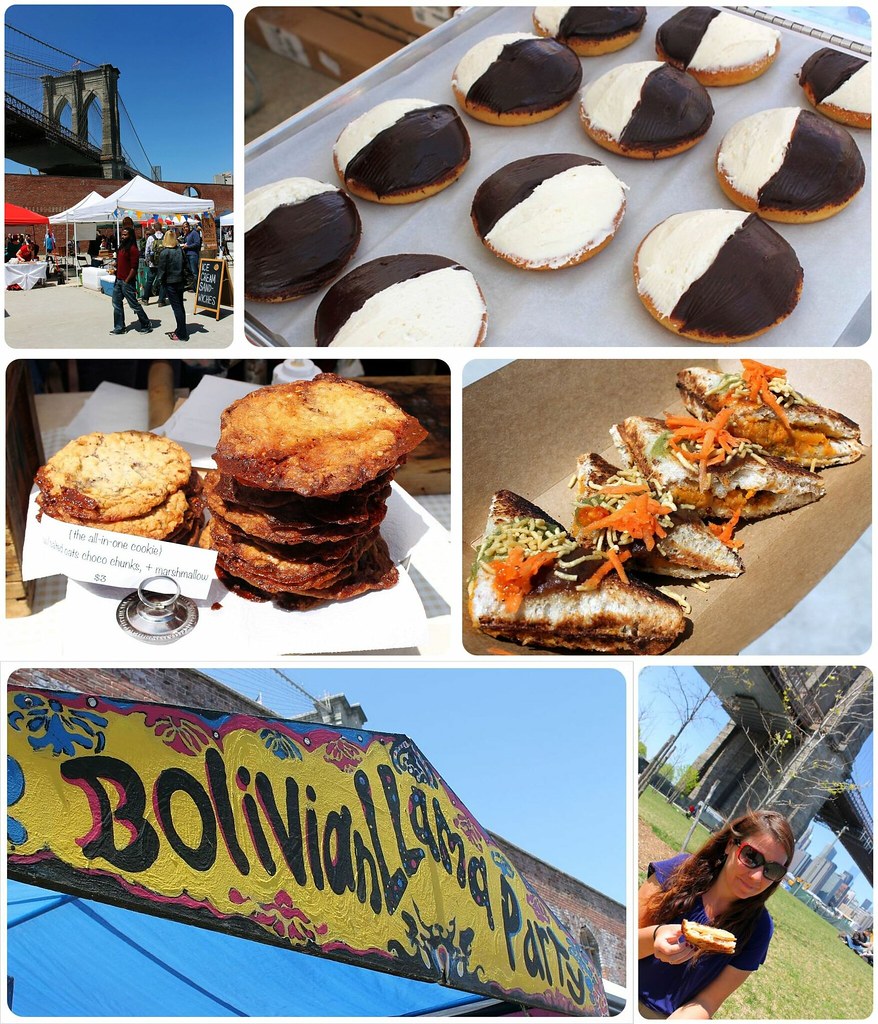 Details: Open on Sundays from 11am to 6pm (April through November). Location: East River State Park in Williamsburg. Closest subway station: Bedford Ave (on the L Line). You can also take the ferry to North Williamsburg; the ferry dock is right next to the market.

Not a market in the traditional sense, Chelsea Market is more of an upscale assembling of restaurants, bakeries and food stores housed in the former home of the National Biscuit Company, where the first ever Oreo was made in 1912. 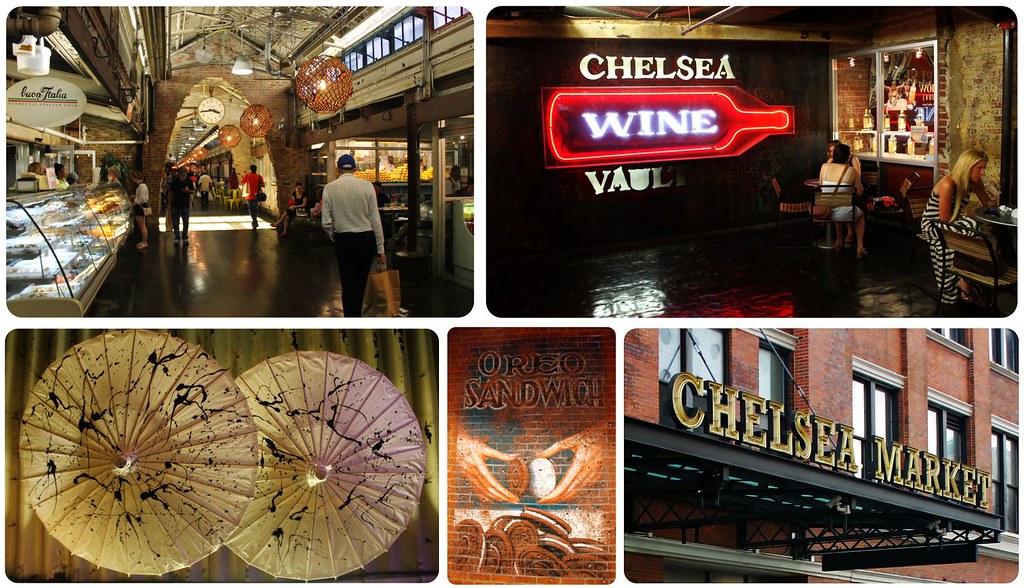 The industrial aspect of the building was maintained when it was transformed into a market, creating an industrial chic vibe. Eateries include the fabulous Green Table, Chelsea Thai, a small storefront of the Artists & Fleas market from Williamsburg, plus Amy’s Bread – which has excellent cupcakes and other sweets, The Fat Witch – some of the city’s best brownies and Eleni’s famous cookies. Just off the Highline Park, this is a great pit stop for snacks to eat up on former railroad line turned green space and park, all with great views over Lower Manhattan. 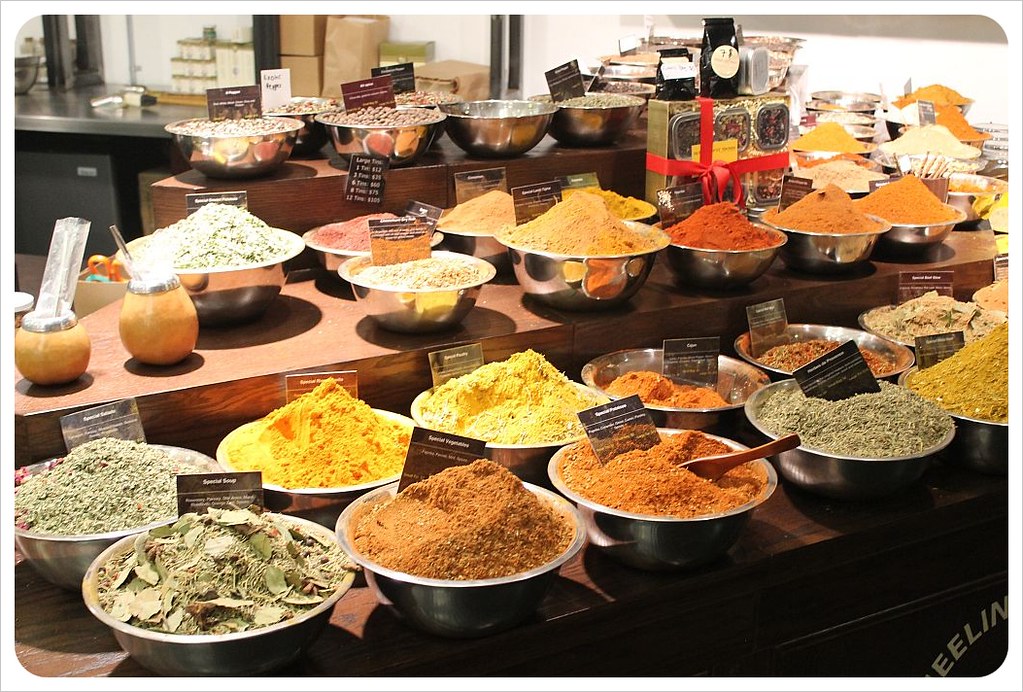 Upstairs and out of reach for the everyday tourist are several television studios, including Food Network’s headquarters, where Iron Chef is filmed.

A great excuse to stroll through the Upper West Side, the Green Flea market on Sunday has dozens of vendors of antiques, collectibles, vintage clothes, jewelry, handicraft, food and more. Located right next to the Natural History Museum, the Hayden Planetarium and a short walk from Central Park, you can easily combine a morning here with an afternoon museum visit or stroll through the park. 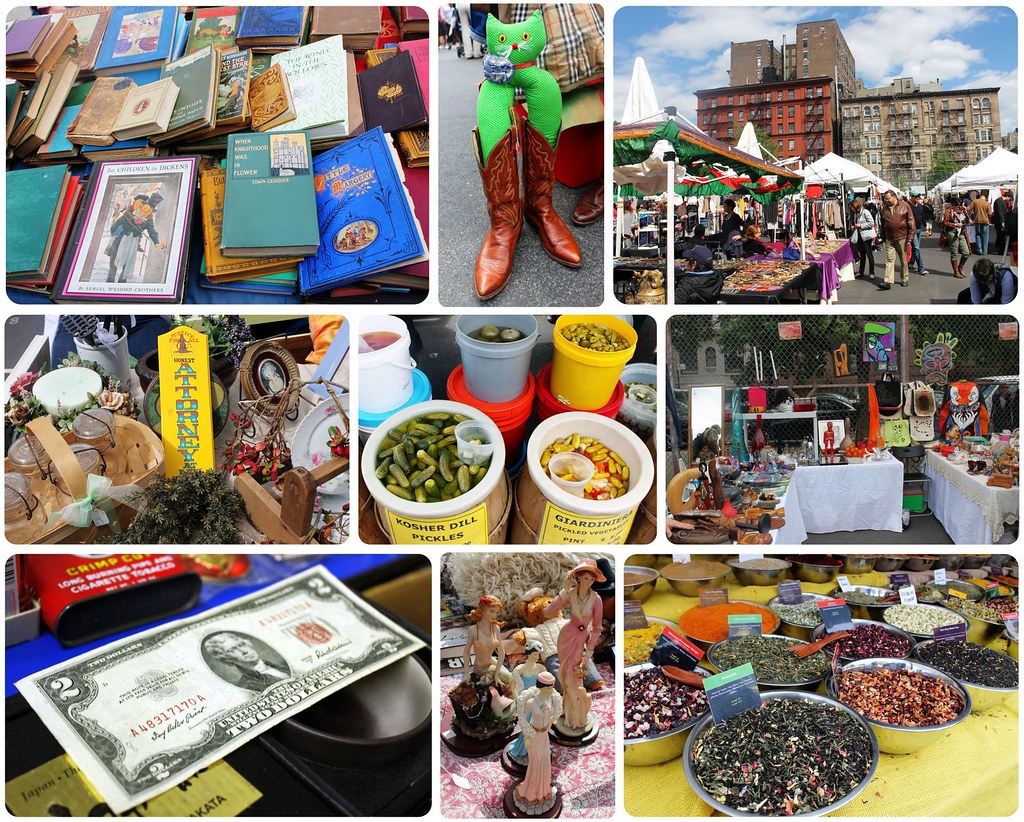 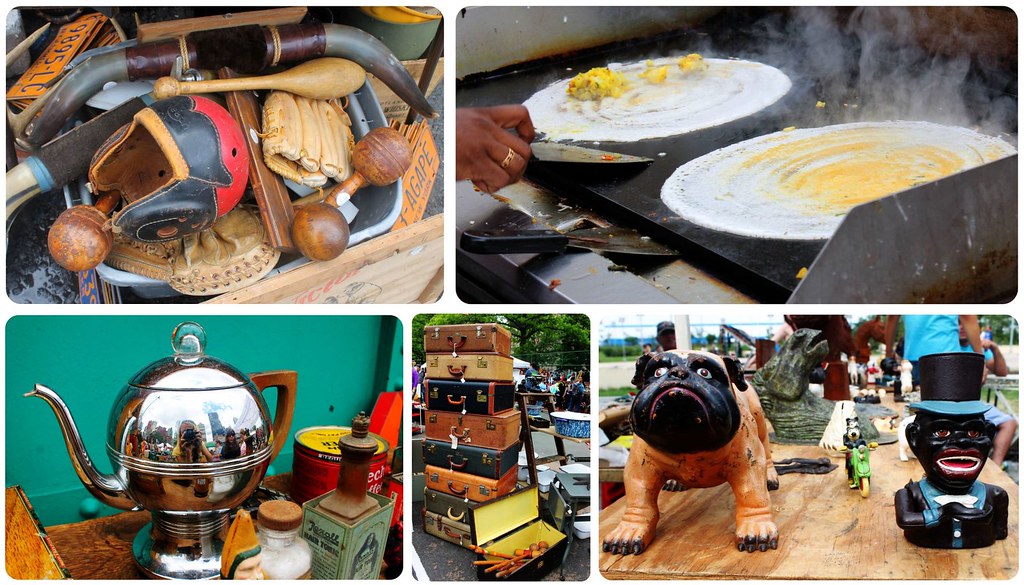 What is your favorite market in New York City? 28 things to do in New York City in the summer
Click here to cancel reply.

Love these markets! Great post this, I've been to Chelsea Market and Smorgasburg, but I definitely have to check out the other ones! Smorgasburg is awesome and it's getting more and more popular it seems. One that I would like to add, but I'm not sure if it fits your criteria of a market, is Eataly! Love that place and I just recently discovered it in NYC after coming back from Florence!

Eric, it's crazy how popular Smorgasburg has become in such a short span of time.. no matter which one I go to, it's always packed! As for Eatily - I've never been a huge fan, but maybe I just haven't tried the right thing there yet. Gotta love their nutelleria though ;-) And everyone I know in NYC loves the place, so there's gotta be something to it that I'm not seeing (yet!)

[…] of my favorites – you can find a list of all my favorite New York City flea and food markets here). As long as the sun is shining and I’ve got an iced coffee in my hands, I’m good to […]

[…] favorite days in Williamsburg are Saturdays and Sundays, when three of our five favorite New York markets take place in Williamsburg. On Saturdays (between April and November), head to the East River State […]