New York by on 10 comments

Now that I am back in New York I thought it was a good time to continue sharing some more of my favorite things to do and places worth checking out that are off NYC’s beaten tourist trails.

One of the things I get frequently asked about are my favorite places go take in a good view of or over Manhattan. A city with a remarkable skyline such as New York is basically begging to have its panoramic photo taken, and luckily there are some great spots around town where you can do exactly that. Some of these are from high above the city, most of them are free, but the one thing they all have in common: they are all worth a visit! So without further ado – here are my top five views over Manhattan: 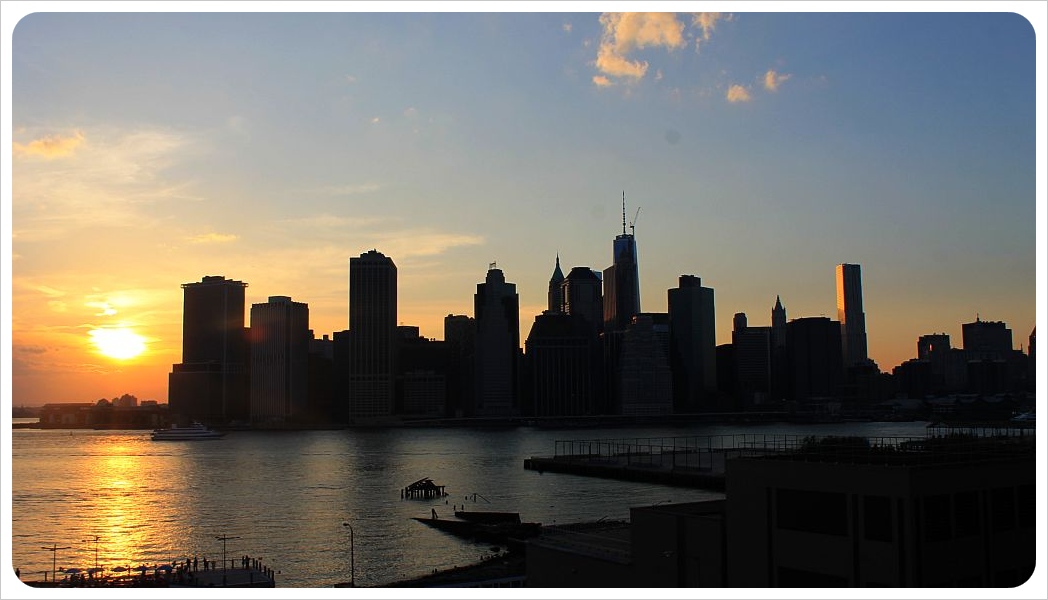 This tiny beach right between the Brooklyn and the Manhattan Bridges has seen a major revamp in recent years, with the surrounding Brooklyn Bridge and Main Street Parks getting a face-lift and the beach itself being equipped with large stone steps to sit on – perfect to watch the sunset with the Brooklyn Bridge as a backdrop. Make sure to stay long enough to see the skyscrapers of southern Manhattan, including One World Trade Center (the tallest skyscraper in the Western hemisphere), light up, and take a stroll through Brooklyn Bridge Park. You can walk all the way down to Brooklyn Bridge’s Pier 6 through the park, following the East River for about 1.5 miles through the renovated park.

Extra tip: There are several great foodie spots nearby: Juliana’s and Grimaldi’s Pizza for true New York style pizza, a Shake Shack for your burger fix, Almondine Bakery for scrumptious croissants, and excellent coffee at the Brooklyn Roasting Company.

TimeOut Market, which opened in a converted warehouse right on the shore of the East River, has 21 different restaurants under one roof. And speaking of roof: make sure to head up to the rooftop there for some amazing panorama views. 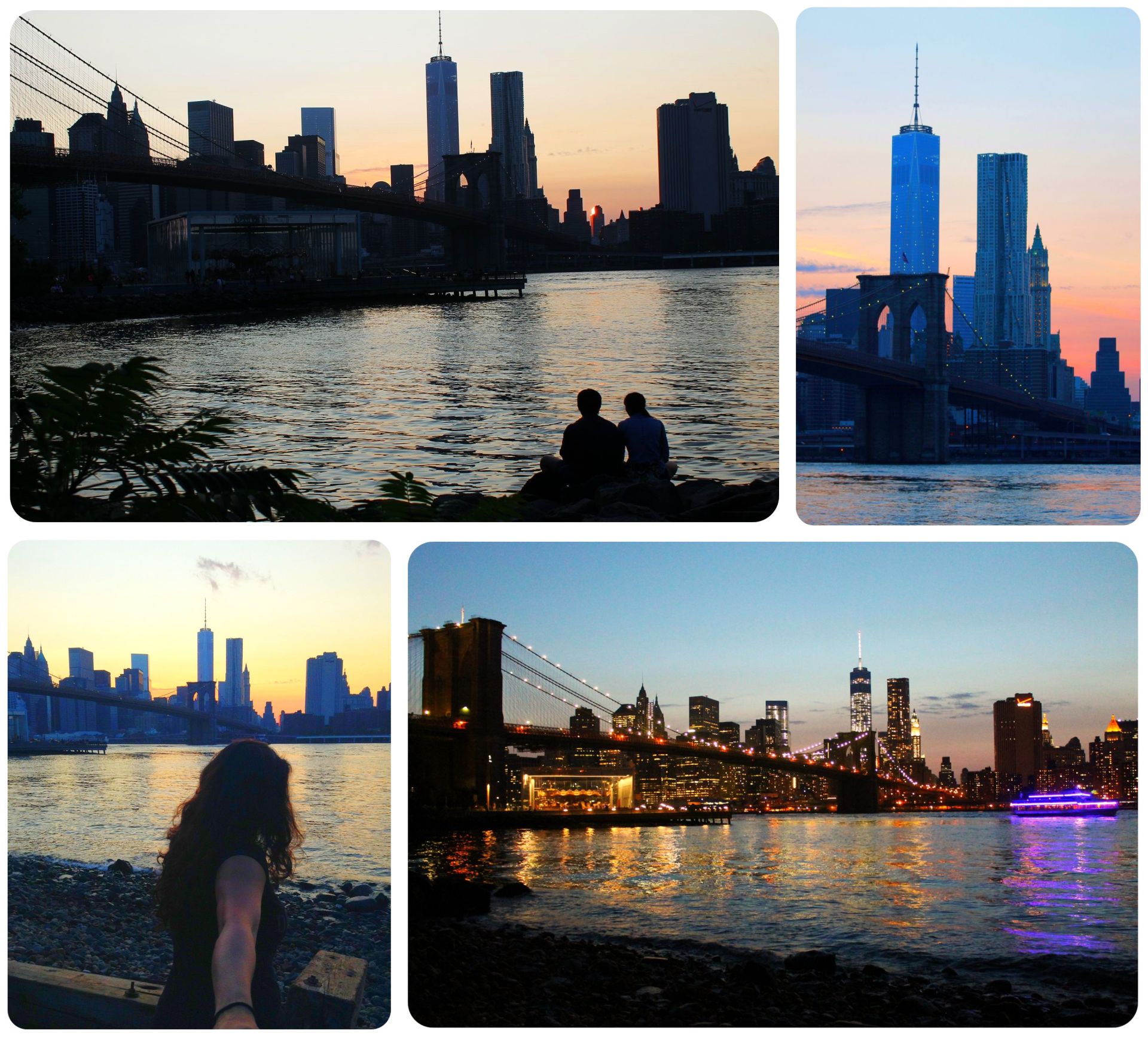 2 The Top Of The Rock

Extra tip: For an extra $15, you can visit the Top Of The Rock twice in one day – once during the day and once at night – and it’s still cheaper than the Empire State Building. The observation deck is open daily from 8am till midnight, and you can save yourself the time to wait in line by buying your tickets online here. 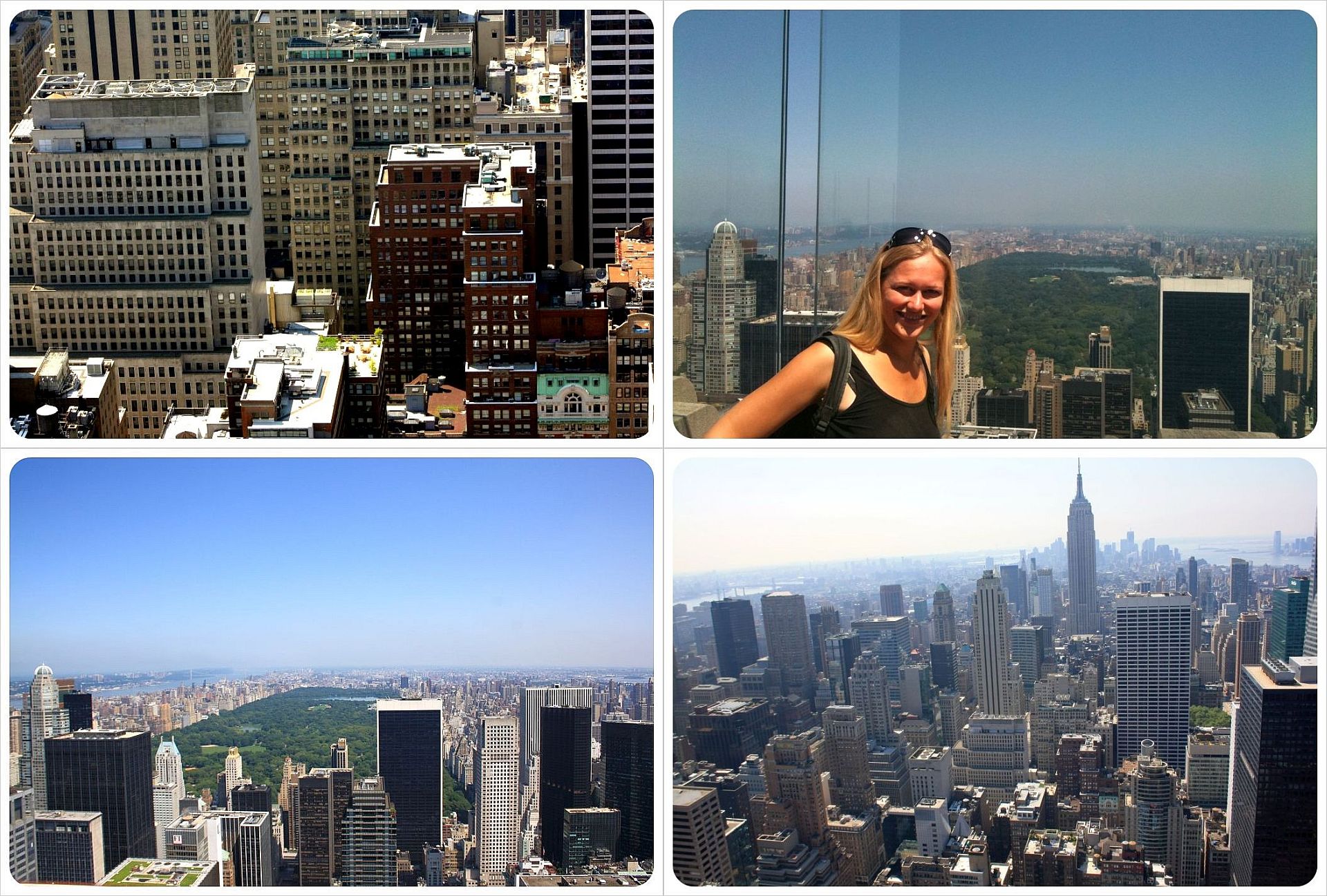 The Staten Island Ferry has some of the most remarkable views of Southern Manhattan – in fact these are views you don’t get from anywhere on the island – and the best thing: you don’t have to pay a cent for these stunning views. My tip is to take a ferry over to Staten Island about 20 minutes before sunset, and the next one back, so that you get to see the Manhattan skyscrapers bathing in a wonderful orange light, and a fully lit-up city on the way back.

Extra tip: If you only have limited time in New York, don’t bother visiting the Statue Of Liberty. Lines to get there (and to get on top) are usually outrageously long, and the views you get of the statue from the free Staten Island ferry are almost as good as taking the $18 Liberty Island ferry. 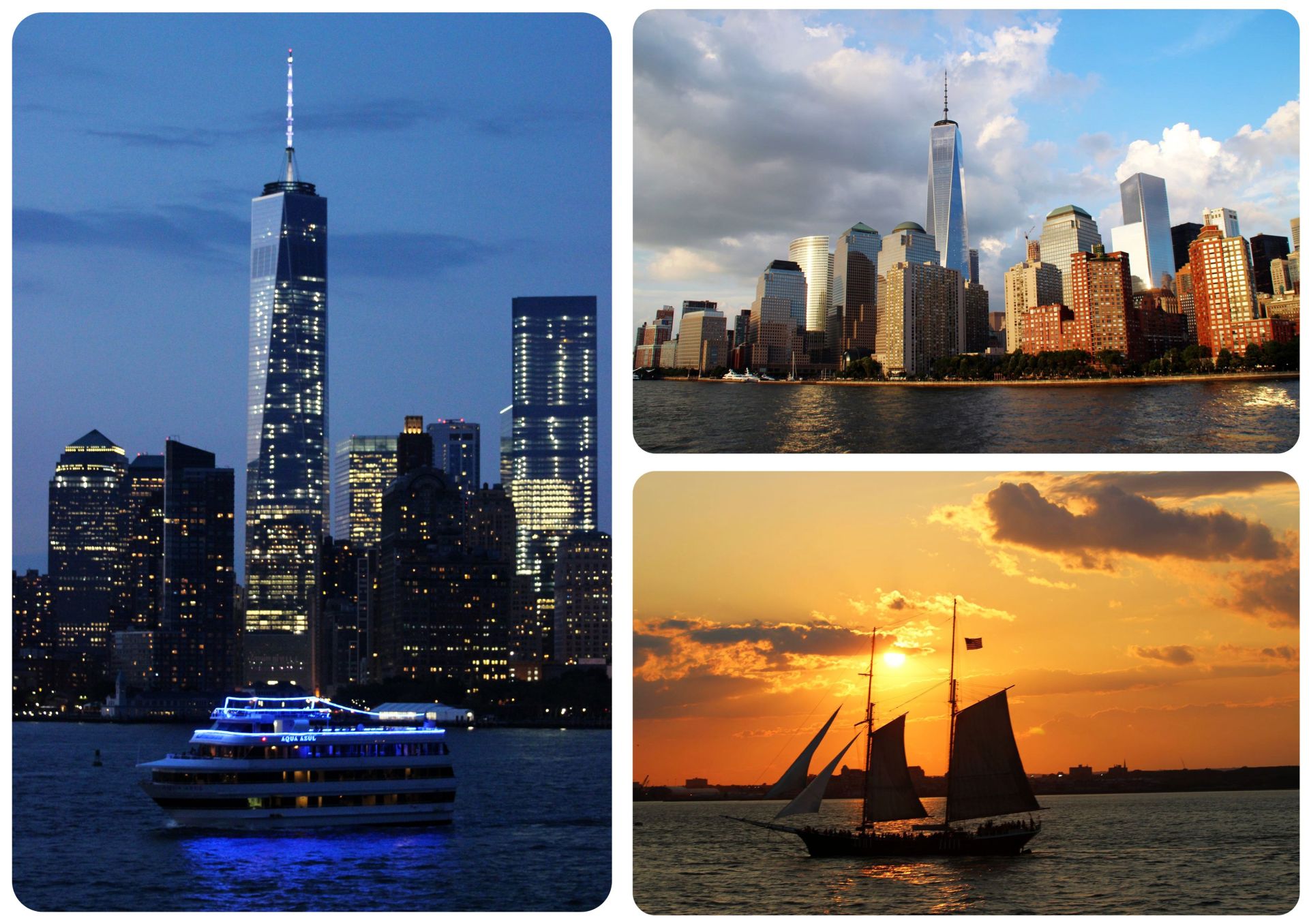 Another one of Brooklyn’s East River beaches, but the views from here are very different from the Pebble Beach vistas in #1 since the river makes a big turn and you’re much further north. Featured in your views here are the Williamsburg Bridge and the southern Manhattan skyscrapers to the south and the midtown skyscrapers including the Empire State Building and the Chrysler Building to the north.

Extra tip: If you happen to be in New York over the weekend, plan your visit for a Saturday and combine it with a stroll over the Smorgasburg food market, which takes places every Saturday in East River State Park between April and November (11am – 5pm). You can sample some of New York’s best restaurants, coffee shops, ice cream sandwiches, pizza, lobster rolls and lots of yummy ethnic food from 100 vendors.. One of my favorite markets in New York City! 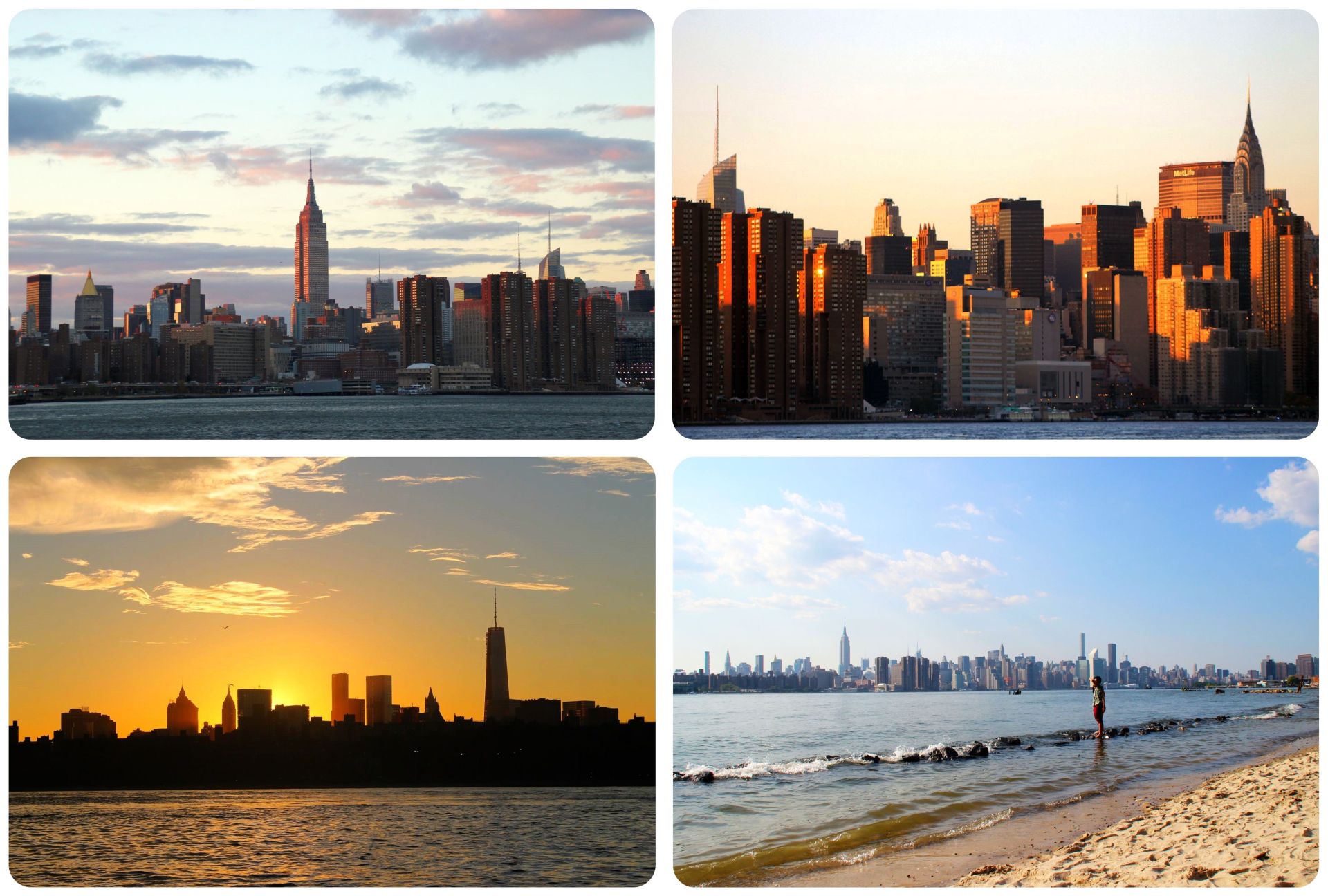 The ride in the alpine-style gondola is short and sweet, not lasting longer than five minutes, but the views over the East River, the you-can-almost-touch-it-it’s-so-close Queensboro Bridge and the ‘concrete canyons’ of Midtown Manhattan are unrivaled – plus, the ride is free if you buy a 7-day Metro Card ($33, usually the cheapest option for New York visitors, even if you only spend five days in the city, since there are no day tickets and a single ride is $3) – the aerial tramway is part of the MTA!

Once you reach Roosevelt Island, you shouldn’t head straight back to Manhattan though – walk down to the southern tip of the island instead, where the Franklin D. Roosevelt Four Freedoms Park, the first memorial honoring Roosevelt in its home state, opened in late 2012. The memorial is worth a visit in itself (free admission, but closed on Tuesdays), and also offers beautiful views over the East River, Long Island City and Eastern Manhattan, including the UN building and the Chrysler Building.

Extra tip: If you want to spend more time on Roosevelt Island, there’s plenty more to see on the thin, only 2 mile long island. The ruins of the Smallpox Hospital can be a bit creepy (enhanced by the fact that the hospital hosted patients with contagious diseases in the 19th century), but are a dream for photographers, and on the northern tip of the island you find the Blackwell Island Lighthouse. For more places worth checking out on the island, check out Lonely Planet’s Best things to do on Roosevelt Island in New York City. There are a few shops on Roosevelt Island and there is a Starbucks, but bringing some picnic food is not a bad idea if you’re spending a few hours here. 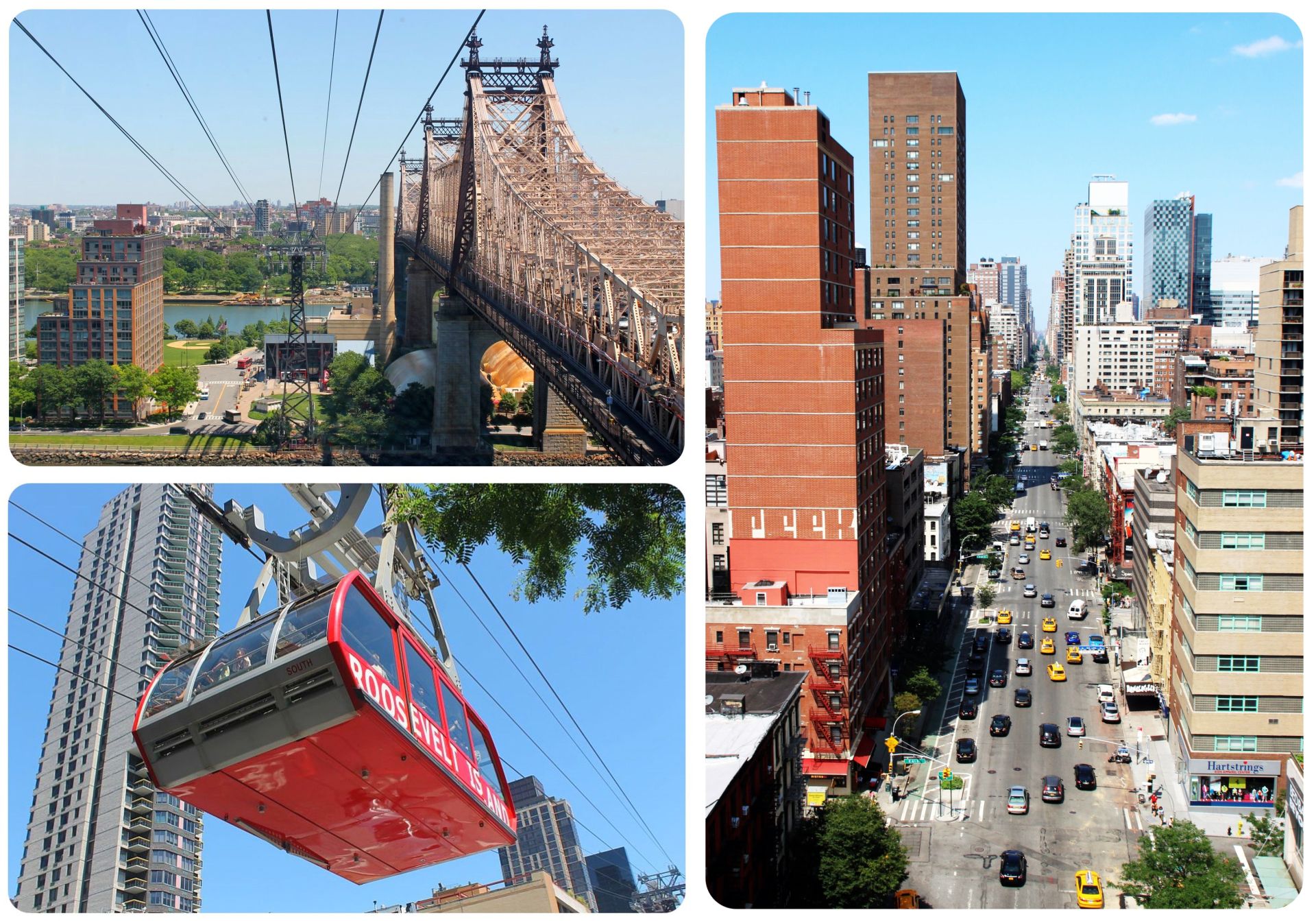 Of course there are plenty of more views over New York to be found, for example from Rainey Park in Astoria, Queens (northern Manhattan), from Governors Island (southern Manhattan), the new One World Trade Center Observation Deck, the rooftop of the Metropolitan Museum Of Art (don’t miss the rooftop if you’re visiting the museum!), Gantry State Park in Long Island City (East River and Eastern Manhattan), Brooklyn Heights Promenade, Greenwood Cemetery for further-away views over Manhattan. And then there are dozens of rooftop bars all over Manhattan, with fabulous places like 230 5th, the Press Lounge, Upstairs. PH-D or Le Bain, to name just a few. 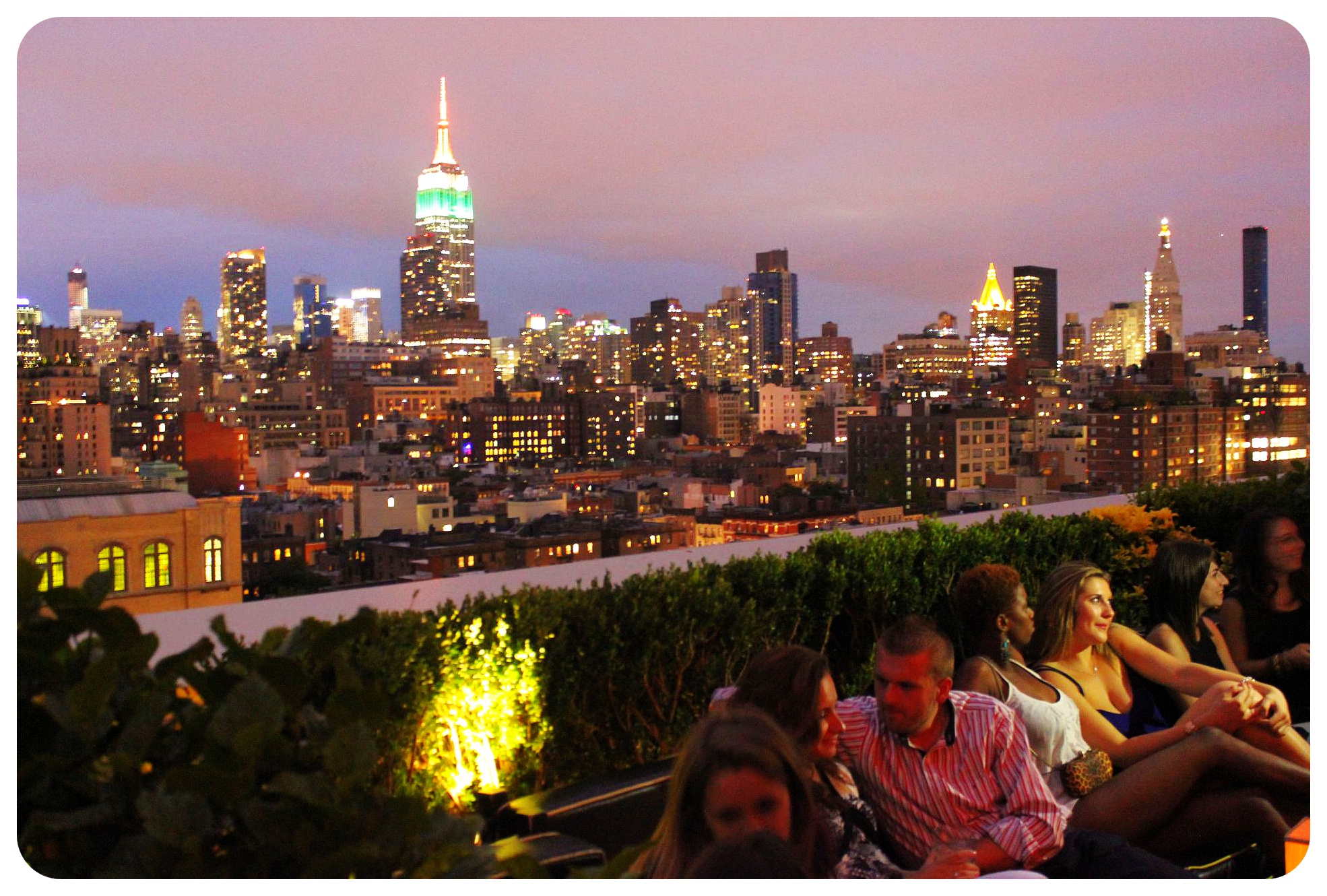 Extra tip: If you love views from above as much as I do, check out the Manhattan rooftop bar crawl during which you visit three different rooftop bars in Manhattan. The crawl includes one drink in each bar, skip-the-line access and priceless views. 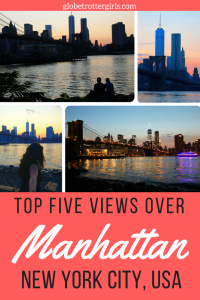 Happy anniversary! Today we celebrate one year on the road