You might imagine Little Italy in New York City to be an authentic Italian neighborhood filled with young Robert DeNiro types shoveling down plates of delicious fresh pasta.

If so, you’d be wrong, and so were we on our first disappointing visit to Little Italy back in 2009.

Not far from the shores where millions of Italian immigrants would have disembarked throughout history, it seemed logical that the Little Italy neighborhood of New York would be as Italian as it gets on American soil. Instead, the three block radius might represent the Italian influence of the past, but nothing feels truly authentic here. I also remember being struck by the fact that Chinatown seemed to have completely taken over, and we never expected neon Cantonese signs anywhere near Italian restaurants. On that first NY trip four years ago, the only thing Dani and I appreciated was how distinctly American and quintessentially New York it felt to ask whether the Chinese had chased the Italians out of the neighborhood. 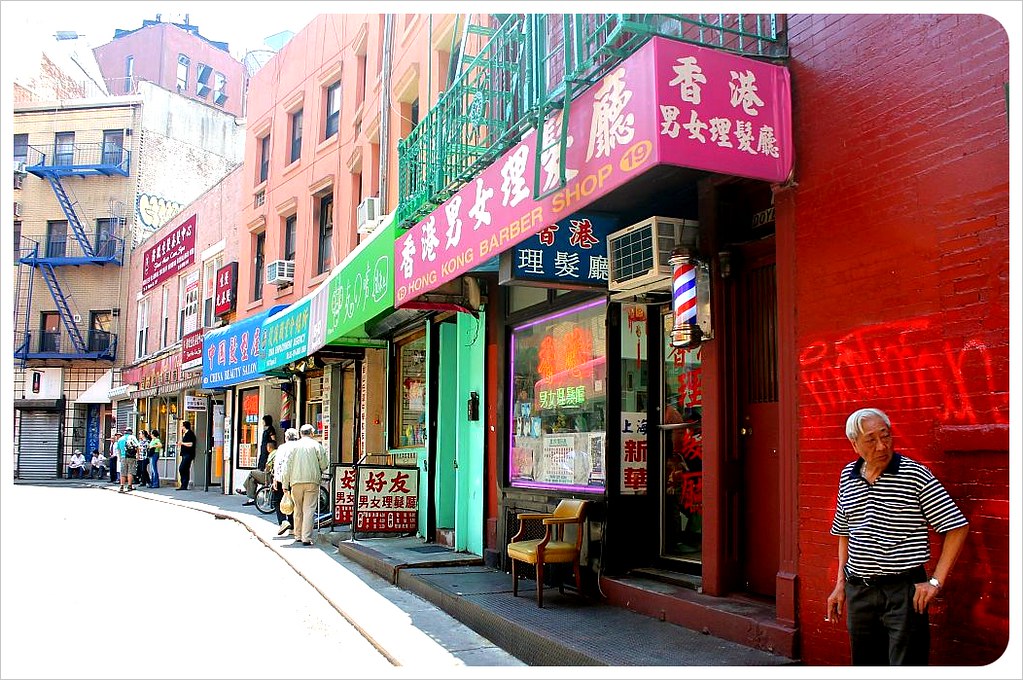 After all, washing down a slice of pizza with bubble tea couldn’t be easier to arrange than here in this strange intercultural zone in lower Manhattan. There had to be more to the story, which is why we signed on for a food tour of Little Italy and Chinatown with Ahoy New York Food Tours in June.

Whether you have been to New York ten times or are planning your first visit, Ahoy Food tours is a great place to start. Come hungry because Alana, tour guide and owner of the company, will make sure you leave completely stuffed, all while feeding you fascinating nuggets of history about the waves of immigration that have given New York, and the U.S. as a whole, the texture it has today. 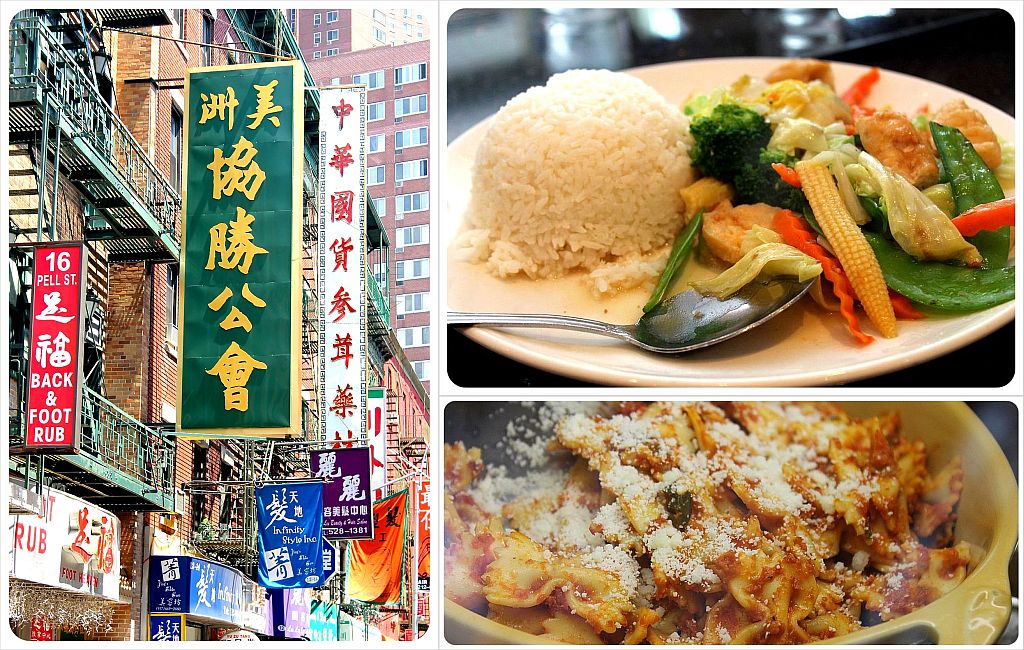 Along the way, Alana cleared up several myths and misunderstandings for us, and we chose our top three to share here:

Truth: Alana didn’t really recommend any restaurant to try here at all. Instead she took us to two of the area’s longest-running shops to sample homemade Mozzarella, imported cheeses and prosciutto, a bakery to sample cannolis and we managed to fit in an excellent slice of pizza before heading to Chinatown. Dani returned to Di Palo’s a few weeks later with the discount coupon you get on the tour, and bough freshly made raviolis, sauce and more of the mouthwatering Piave cheese, which we ate at our temporary New York home. 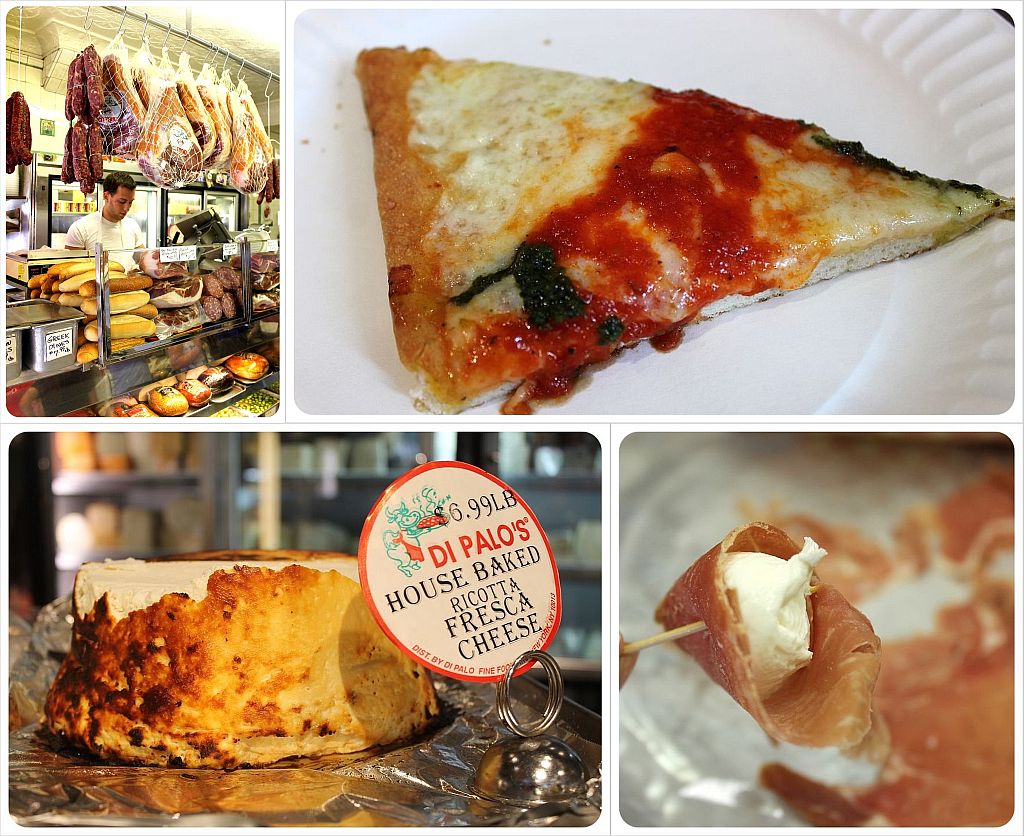 Despite all the yellowing Zagat rating signs on the doors of the restaurants in Little Italy, Alana emphasizes they are all for tourists, and any local will tell you that no one comes to Little Italy for world-class Italian. She did tell us stories of gangsters and celebrities and shoot-outs and all that mobster jazz you would expect to hear about here. 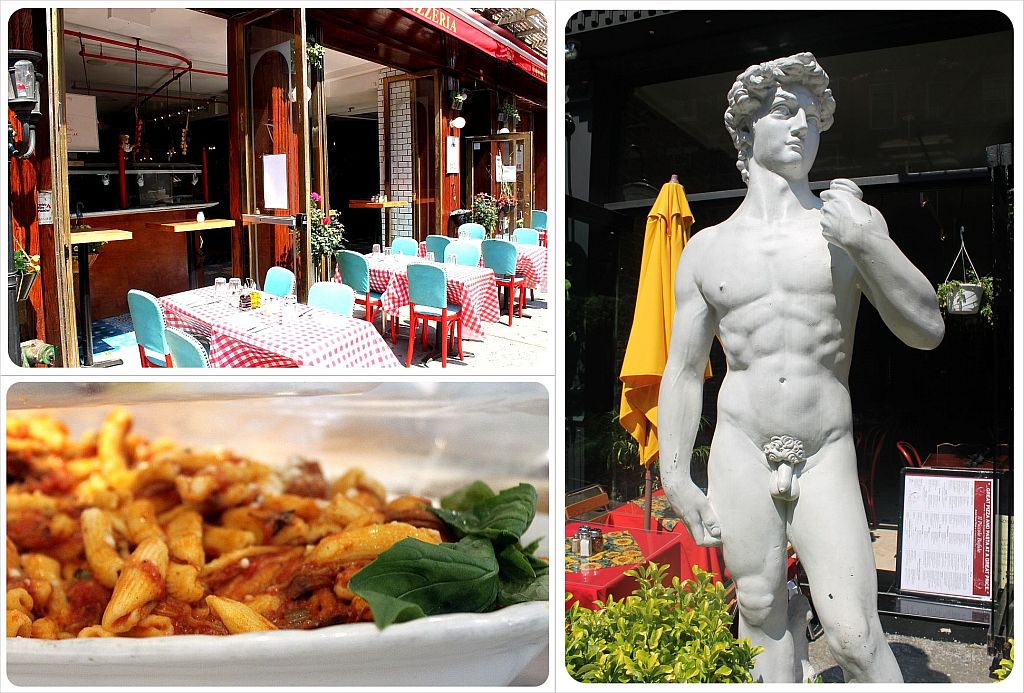 Myth #2:  Chinatown pushed the Italians out of Little Italy

Truth: The Italians had long since left by the time Chinese-American set up shop in the area. Today, under 50 actual Italian immigrants reside in Little Italy, and it has been that way for way over half a century. After the first and second waves of Italian immigrants landed on US shores, they quickly moved out of the crowded tenement-style living to the then-open spaces of upstate New York and New Jersey, to return to the farm life most of them knew from the old country. 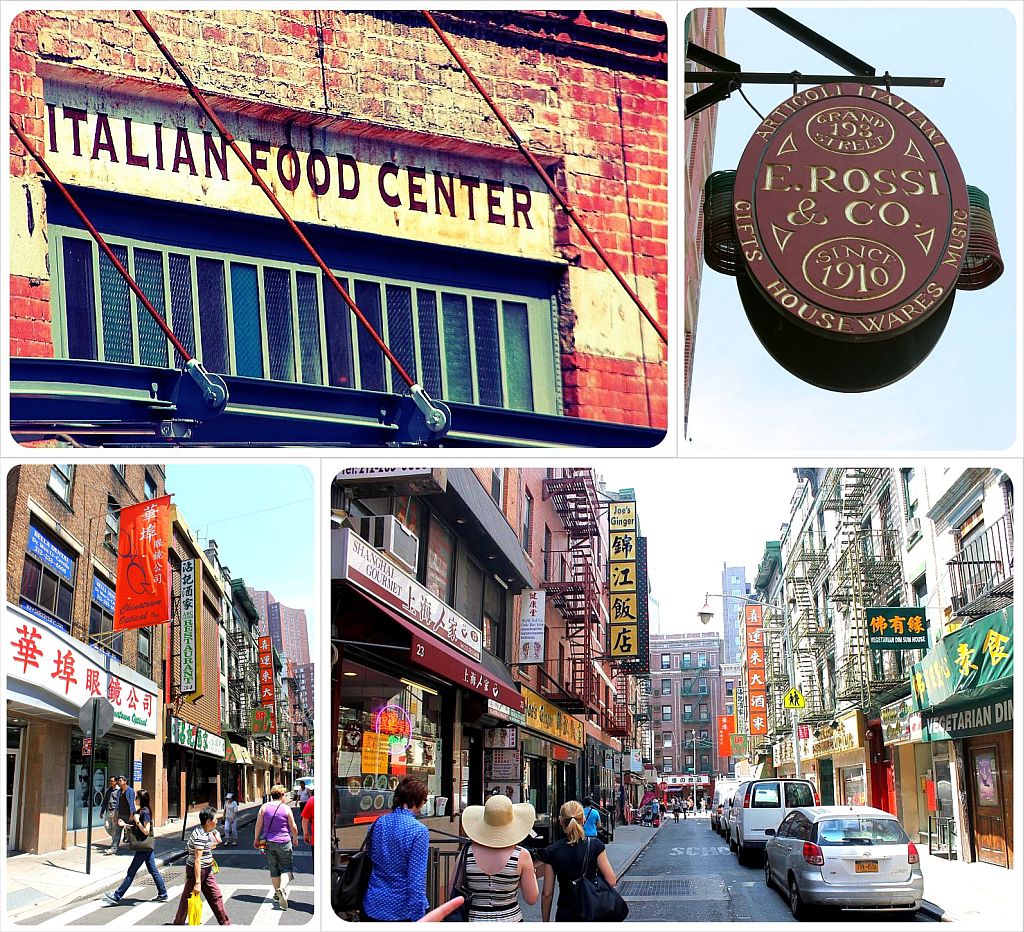 It wasn’t until after the 1882 Chinese Exclusion Act was repealed in 1943 that the Chinese began returning and shifting from typically West Coast immigration to settle New York’s Chinatown neighborhood. On the tour, our senses were overloaded with Chinese life, from the cheap exotic fruits like jackfruits and mangosteens sold in street stalls at South East Asian prices to the overall feeling at Columbus Park. When the Italians lived here, this park was the site of incredible violence (think Gangs of New York) but today this is an outdoor living room where multiple generations of Chinese-Americans do Tai Chi, play traditional string instruments and sit and chat in Cantonese. 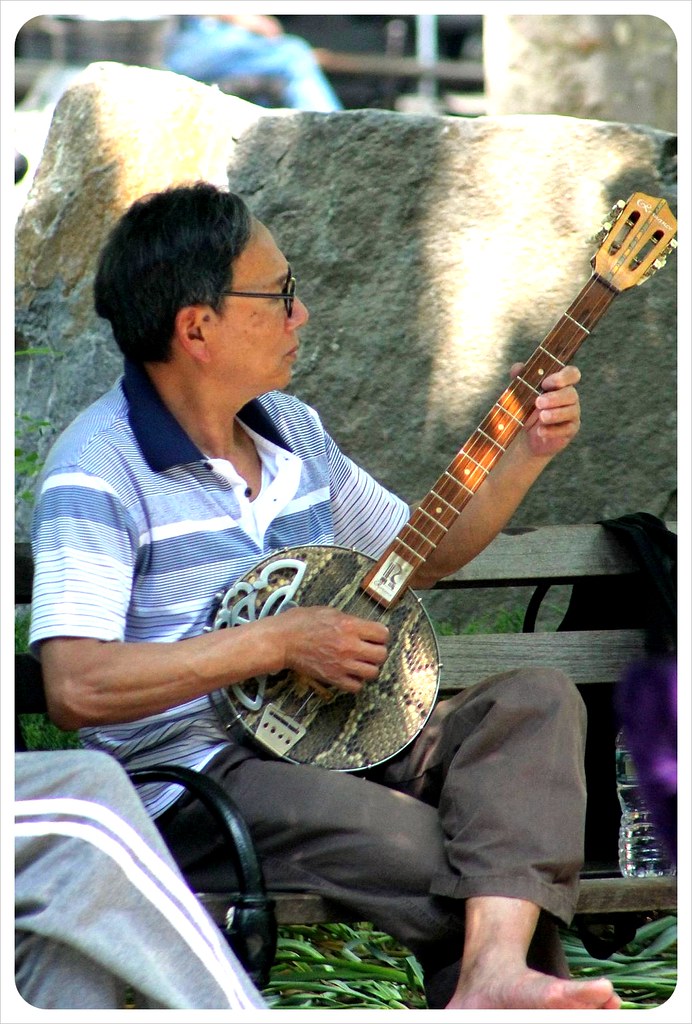 Myth #3: Tours are for tourists.

Truth: Locals have plenty to learn (and taste!) from this food tasting and cultural walking tour. We have had serious bad luck with tours lately, having been on several which were boring, manufactured tourism products served up like processed food on store shelves. Even with ten other people, Alana made this tour feel as though we were really walking around New York with a friend. It was personal, honest and Alana took the time to answer everyone’s questions, not just about the area but things like directions, other New York tours, public transportation and more.

The tour was the canvas upon which Alana painted an incredible picture of New York City for us. 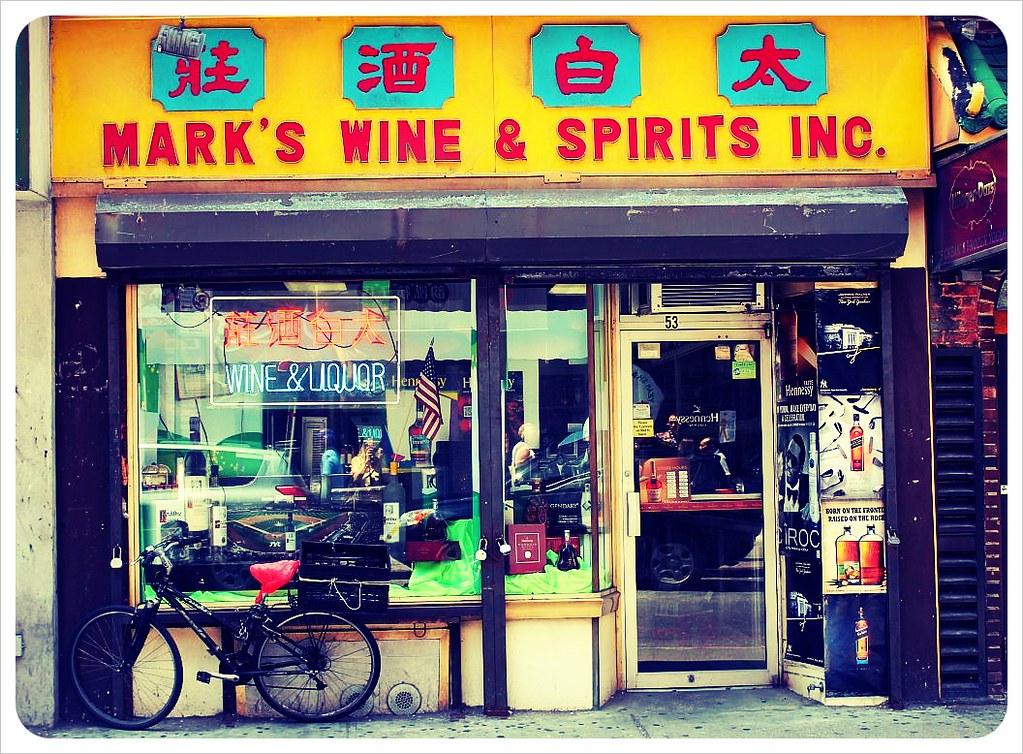 A personal highlight was the fact that, even though there is plenty of meat on the tour, Alana was able to effortlessly adjust the tour for the two of us without affecting the experience for anyone else. Food tours can be complicated for vegetarians, but we didn’t feel like we missed a thing.

Even superheros have a weakness, however, and on this tour we felt that the stop the Thai restaurant was out of place. The food just wasn’t good enough to justify the seemingly out of place cuisine, but we understand why the tour stops here: Coming in at the midway point, it is a sit-down stop with bottomless glasses of water and a chance to escape the sun/rain/heat/cold and use the bathroom. We would have preferred a similar stop at a dim sum restaurant, especially after learning that Chinese dim sum is traditionally served between 10 and 2, which would have been perfect timing. 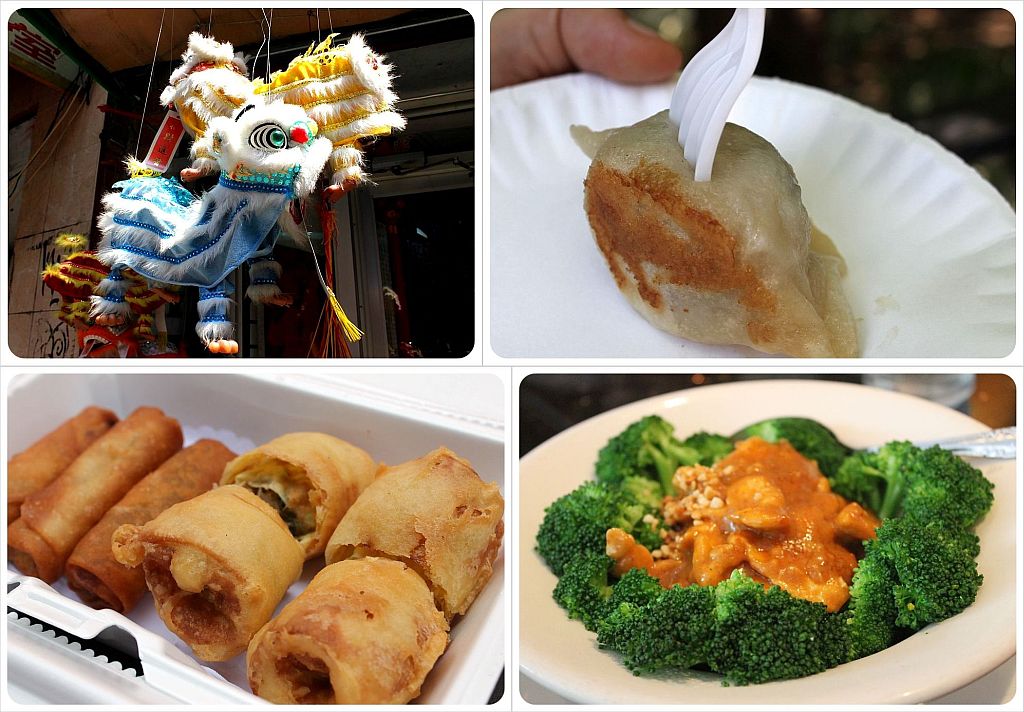 This was but a slight blip in an otherwise perfect tour, however, which left us seriously stuffed to the gills. Here is an overview of the stops on our food tasting tour:

A sticky, humid morning had given way to an extremely hot afternoon, but even as the tour wound down, Alana stayed to point us all in the right direction and answer questions from everyone in the group before we splintered off back into the wilds of Manhattan for the day.