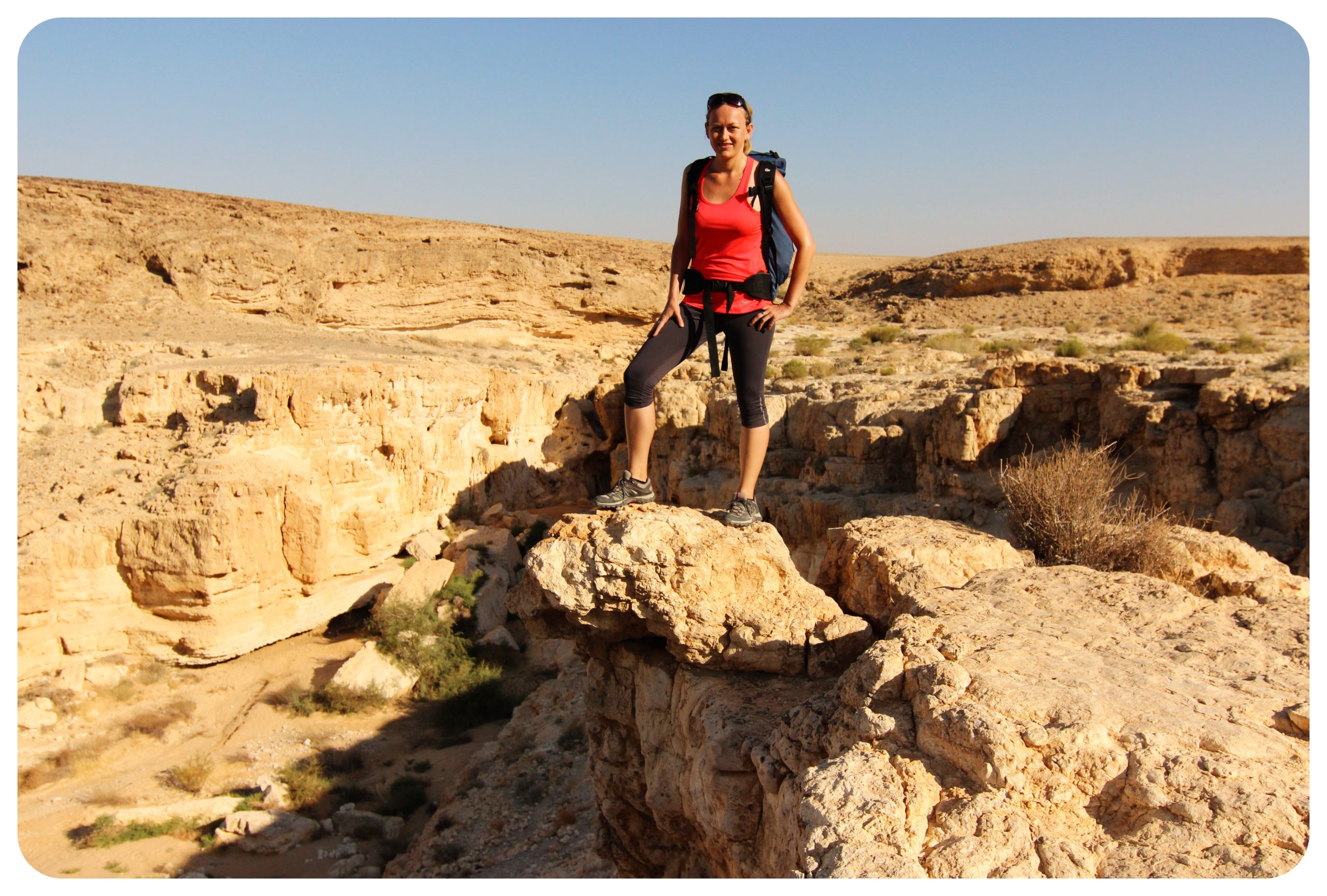 I started these monthly updates to tell you about my current whereabouts, my most recent travels, what went well and what didn’t, plus a little sneak peek of what’s next for me.

I left New York at the beginning of September, and while I left the city in style with the fabulous chauffeur service provided by Blacklane.com (what a difference it makes to arrive at the airport in a completely relaxed state instead of sweaty and stressed out after struggling with public transportation and three carry-ons plus a severely overweight backpack – totally worth the splurge, especially before a long trains-Atlantic flight, IMHO), I also left with a heart so heavy in my chest that it was hard for me to hold the tears back all the way to the airport. I love this city so much, and I had such an amazing summer there; I left as a completely different person than I was when I arrived there broken into a million in pieces back in May.

The only reason why I didn’t fall into depression after leaving: There was just no time, since I was heading straight to Israel (with a quick pit stop in Germany to cuddle my little nephew and spend a girlie day with my nieces, all of whom I had missed like crazy over the summer) and the excitement of getting to visit a new country took over quickly.

I’ve been traveling through Israel for more than three weeks now, and must say that I have been surprised about how much I like it. Everyone who knows me knows how much I love Middle Eastern food though, and the way to the heart is through the stomach they say… well, I guess there is some truth to that! Trekking the National Trail was an unforgettable travel experience and I have met so many welcoming people here that it would be hard not to like the country. I wasn’t sure if I would regret not hiking the Camino, but right on the first day, while I was trudging through the desert at 100 F/37C, I knew I had made the right decision. Looking around me and taking in the incredible desert scenery was enough to reaffirm my decision for Israel, and looking back at the month that I had I wouldn’t change anything.

I mentioned how apprehensive I was to visiting Israel, but the country itself has blown me away. It is difficult, however, to travel and enjoy the country 100 per cent when you can’t stop thinking about the Gaza conflict that looms over Israel like a big dark cloud, especially with the last war having ended just before my visit. I have been learning a lot during my time here, visited the West Bank several times, always trying to understand both sides, but the complicated political situation cannot be ignored (at least not by me, I met other travelers who seem much less concerned about the topic). I will write more about this when I share my experiences in Israel, since it would go way beyond the scope of this post. 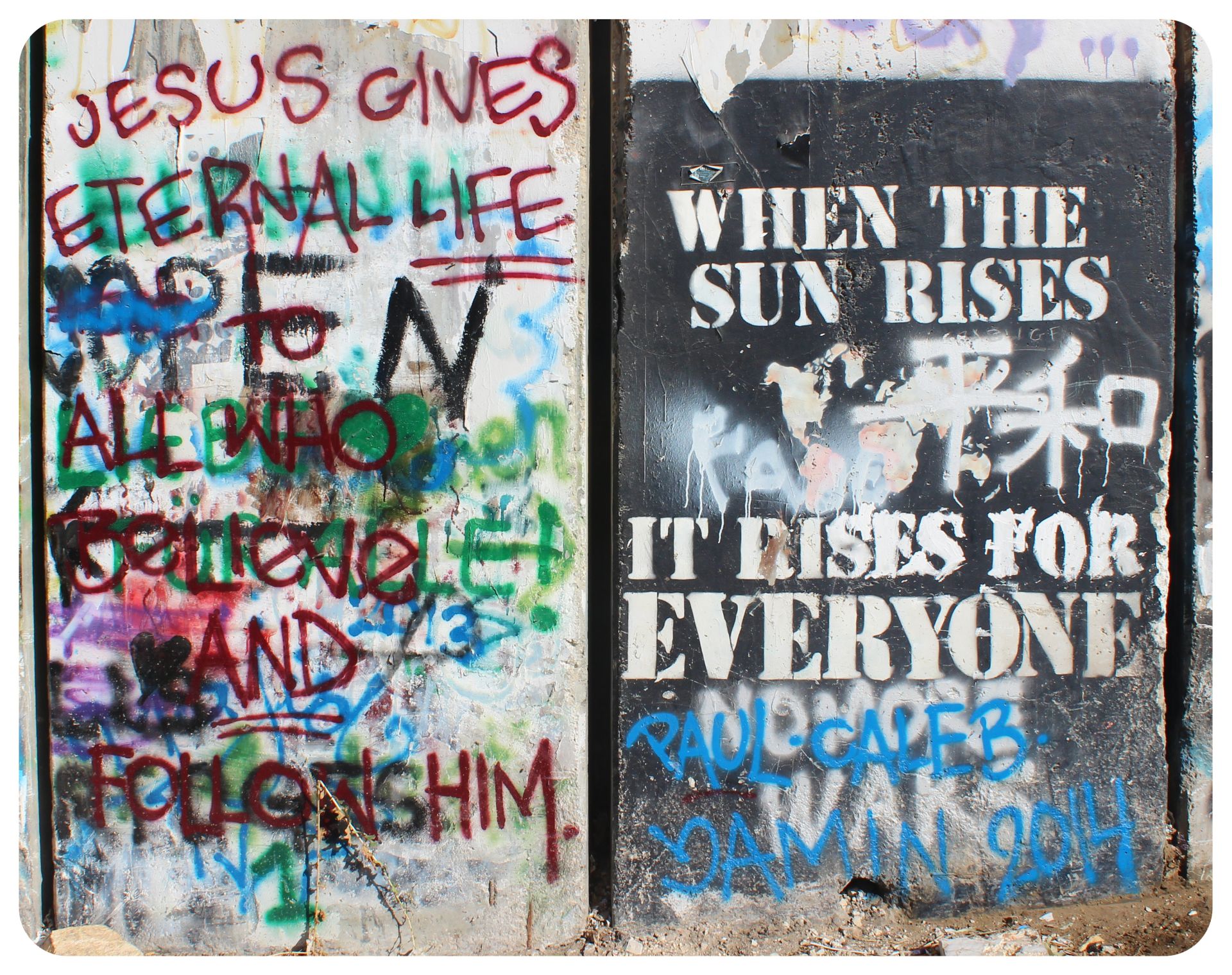 Overall, I feel like I have a much better understanding of both sides than I did before I came here, and like I said, the country itself is just incredibly beautiful. I loved road tripping around the entire country, spending time in Jerusalem and Tel Aviv, floating in the Dead Sea, exploring the ancient port cities of Acco and Jaffa, falling in love with beaches along the entire Mediterranean coastline, and of course the desert, through which I trekked for two days as part of the Israel National Trail hike. What made my experience here outstanding though is how warm I was welcomed everywhere I went – by strangers, by fellow trekkers, by the family of a good friend who invited me into their home for Rosh Hashanah (the Jewish New Year), Palestinians who were happy to chat with me about life in the West Bank, people I met along the way who became good friends. I am excited to share all my stories with you and am already planning my next trip to this region in my head. 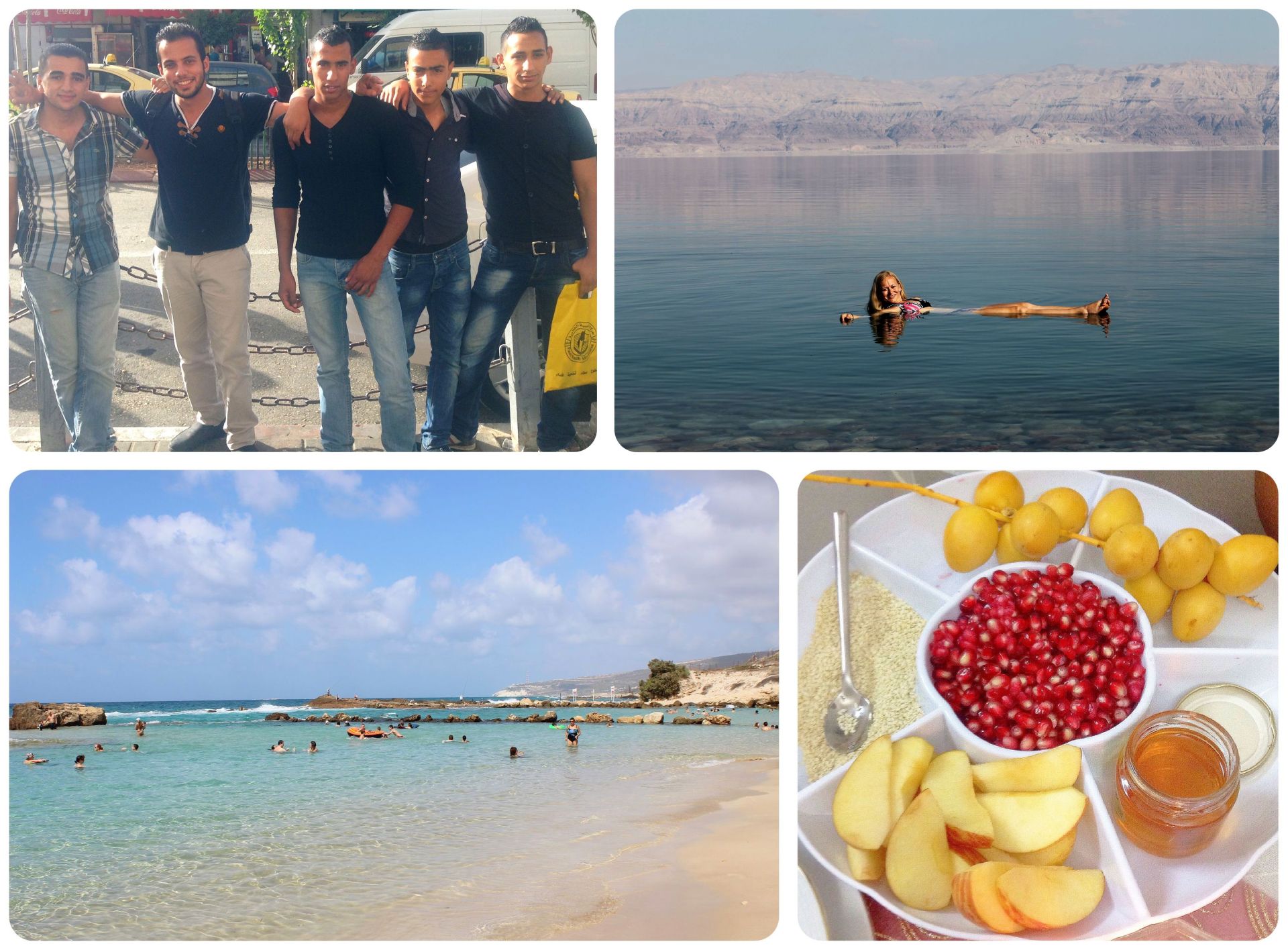 Business! I’ve been working hard on improving and growing this website, and as a result I have been getting more and more interesting business offers and invitations for trips in my email inbox. I still decline most of them, and only accept the ones that I think are an excellent fit for both me and my audience, but it feels good to know that my efforts are paying off. Running the site by myself has been much harder than I could have ever foreseen, and I sacrifice a lot of my free time because I need to invest many more hours than I did when two people were running Globetrottergirls. Sadly, I am not getting around to reading a lot these days or watching movies, but there is one giant project that I am still discussing which would make all these long hours totally worthwhile (a little teaser on that in the ‘what’s next’ section).

-Work-Travel-Balance. Which was basically non-existent. I found myself glued to my laptop until 4am every night the week before I left for Israel, surviving on three hours sleep at most and two entirely sleepless nights before travel days. There were days when I felt like a zombie, but I had gotten an unexpected but well-paying workload that I couldn’t afford to decline after spending way too much money on new gear and gifts for my family in New York last month. My travel schedule was just too tight to be able to handle my workload at the same time. I felt like I was barely able to keep up with anything, and am still catching up with my email inbox which was overflowing while I was on the trek (if you emailed me in the past month and haven’t gotten a reply yet – I apologize and promise I will answer your email soon). I’ll have to slow down considerably next month to get back on track, or I will be burnt out by the end of the year.

-Travel tech. This was not a good month with regards to the travel gadgets I travel with – I ruined TWO of my lenses on the desert trek; I assume sand got in. This is really annoying because I had only picked up them earlier this year in New York (at every photographer’s paradise B&H) and the repair here in Israel was more than buying new lenses in the U.S. would be. That wasn’t my only tech mishap though – quite embarrassing, but I dropped my iPod Touch, which I had in the back pocket of my jeans, in the toilet. I am not sure how but it is still working! (Apple quality, my friends!) My reaction was lightning fast, I must have gotten it out within seconds and then tried the drying-the-wet-device-in-rice trick – which seems to work. That was the second near death of my iPod within a few weeks, after it was nearly washed into the ocean in the Rockaways, where it also only survived thanks to my super fast reaction time. After breaking its screen (and my iPhone screen – both within a week) earlier this summer, plus two broken lenses, I realize that I just shouldn’t buy myself any expensive travel tech.

-Health. I came down with a serious stomach bug last weekend (picture some projectile vomiting… or don’t.) and what it taught me: it sucks to be sick while traveling, but it sucks even more so if you’re solo traveling. My new Israeli friends made sure that I am well looked after though, so thanks for everyone who reached out to me and offered me help, medication or company!

-Fitness. I also felt slightly ‘off’ after running on a (nearly) daily basis for four months and not being able to run that much in Israel. Running has become for me what yoga is to others and I realize that I have to find a way to also integrate it in my daily routine while traveling for an overall better and more balanced feeling.

I’m heading to Oktoberfest! Instead of extending my stay in the Middle East and travel overland to Jordan from here (a place very high on my travel wish list), I decided to cut my trip short and leave that for my next trip to this region – there’s so much more to see here in Israel, too. Instead, I’ll be meeting a friend from New York in Munich to celebrate Oktoberfest together. I love the beer festival and have been five times, but I haven’t been there in half a decade. So I jumped at the chance to meet up with my friend who happens to be there for Oktoberfest and introduce her to the Bavarian beer culture and dirndls (we’ll both be wearing one – a first for me! I barely ever wear dresses.) So get ready for some hilarious photos.

As for the rest of the month, I am still not sure about my travels – I am waiting for the flight confirmation for a rather spontaneous trip to a yet to be announced destination… as long as I don’t hold the plane tickets in my hands, I am not going to say anything just yet, but fingers crossed that my next update comes from that very destination.

The same goes for my November/December travel plans, which came together as a complete surprise this month, but since I still haven’t received my plane tickets for that trip either, I am going to have to hold off on telling you about it until the end of next month.

Last but not least, I have been discussing another big project which would be my first major on-camera experience if the campaign moves forward. Sadly, I can’t reveal any details yet, but let’s just say that if this really happens, it would involve a trip to one of my favorite countries in the world (can you guess? ;-)). Stay tuned for an exciting November! 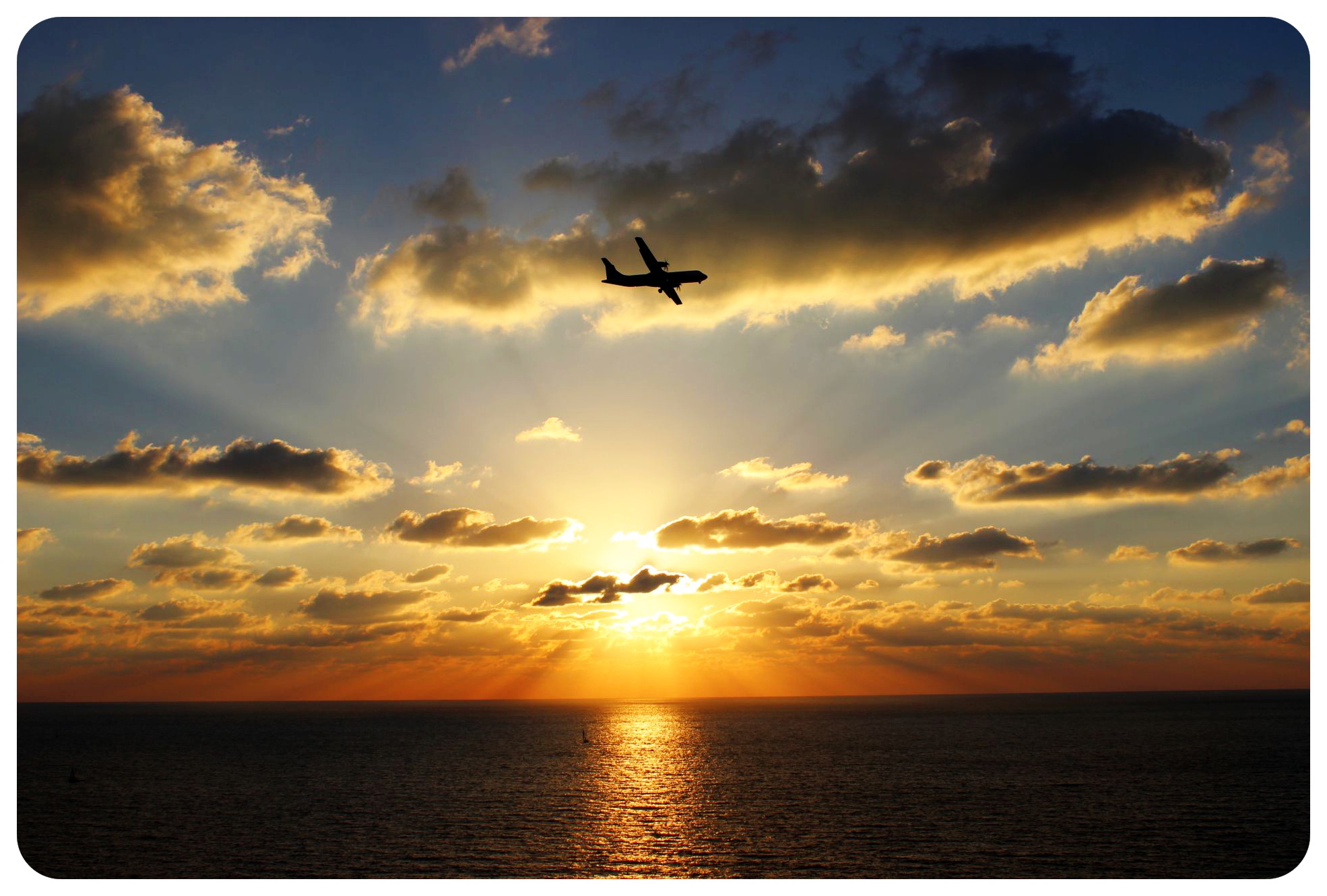