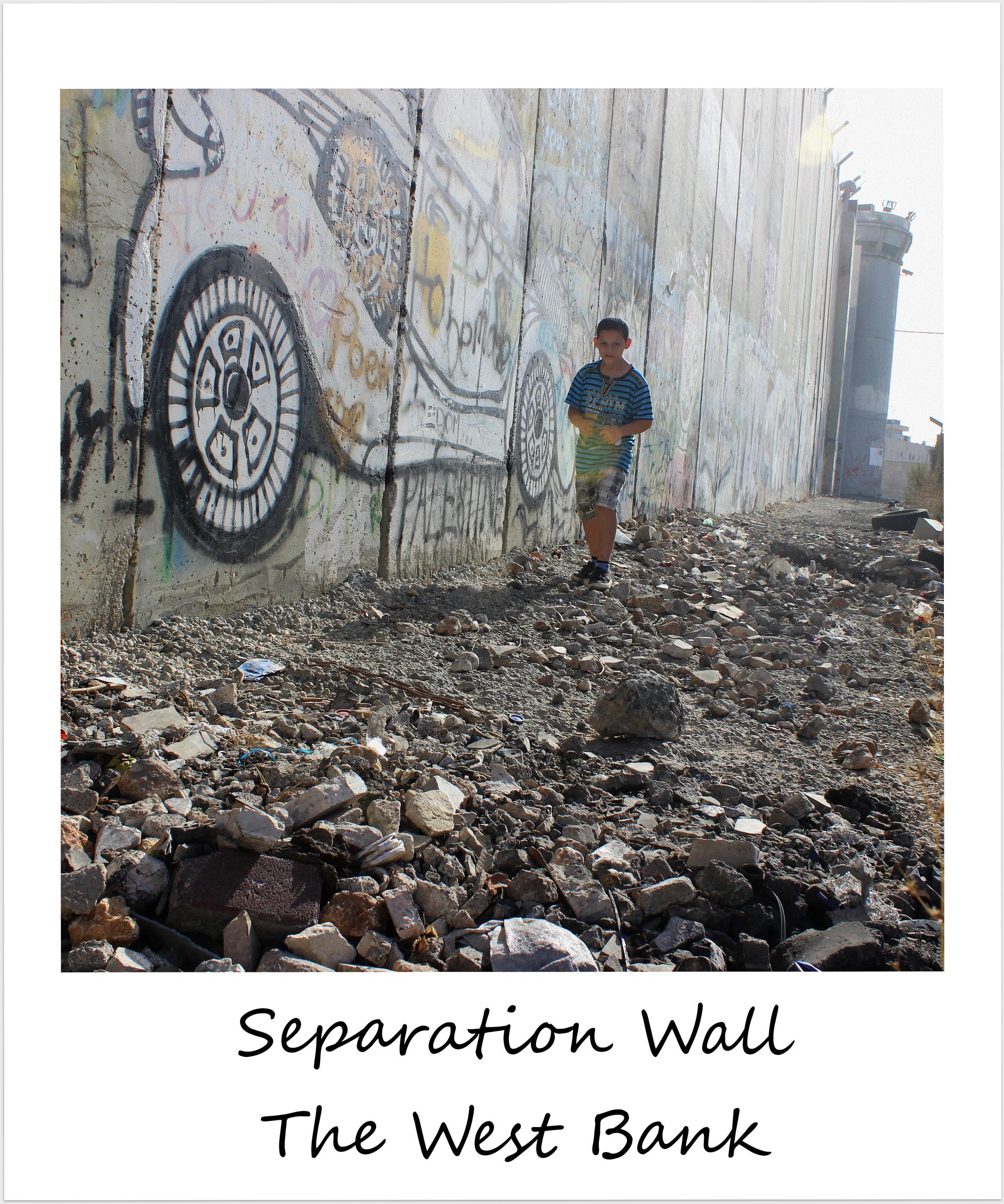 During my last week in Israel, I spent several days in the West Bank – a sobering experience after three fantastic weeks of travel through Israel. The long-lasting conflict between Palestine and Israel is a complicated issue, and talking about it with Palestinians and Israelis I can see both their points of view, however, it was difficult for me to see the Separation Wall, for which construction started in 2002 after the Second Intifada. The Separation Wall was supposed to decrease the number of Palestinian suicide bombings, which had skyrocketed in the early 2000s.

While the wall did cause the number of suicide attacks to decline, it also caused an enormous change in the lives of the Palestinians who are suffering from restrictions in the ability to move and travel freely, and have difficulties accessing resources indispensable to life, such as medical facilities and water. The wall is interspersed with Israeli army checkpoints, making traveling between places harder and longer.

The construction of the controversial construction is not finished yet, with a length of currently just over 300 miles (500km). Once completed, the wall will be 422 miles (nearly 700 kilometers) long. The atrocious construction is one of the highest walls ever built, with a height of 25 feet (8 meters). The Berlin Wall in comparison was only 11.8 feet (3.60 meters) high.

While the wall is completely blank (or: ugly grey) on the Israeli side, most of the Palestinian side is covered in street art, murals and graffiti messages. These messages and pictures are the most noticeable way to protest against the existence of the barrier, with many criticizing and thought-provoking notes and several world-famous street artists like Banksy, JR and Swoon painting large graffiti to make a statement.

Experiencing the separation so closely and seeing its effects on the Palestinian people was heartbreaking to say the least, and I will be sharing my thoughts and lots of photos of the critical messages painted by street artists and visitors when I write about my visits to the West Bank in more detail.

Polaroid of the week: Celebrating the Wild West in Tubac, Arizona
Click here to cancel reply.

Crazy yet enlightening experience. Didn't know that each side of the wall was definitely you'd imagine both would have artwork. This was definitely a re memorable place to be hey.

Very memorable indeed. Still thinking about all the messages I saw on the wall... so intense.

What a contrast - The blank wall on the Israeli side and the messages on the Palestinian side show persistent silence can send a message just as strongly as loud protest.

I love the balance in your post so far, Dani.

The situation there is really so much deeper and more complicated than most can fathom. While Israelis are only trying to prevent more bombings, the wall still creates other social issues for the Palestinians. Shows how simple solutions cannot solve complex problems. Band-aids cannot fix broken legs.

I am still trying to wrap my head around all the things Israelis and Palestinians have told me about the situation, and how to present both sides in a fair way. Such a complicated matter :-/ I like the way you put it: Band-aids cannot fix broken legs.. so true.

I'm so excited to read more about your time in the West Bank. I bet it was a sobering experience. I'm sure I've said this before, but I'm a huge street art fan, especially when it's political. I had no idea that the Palestinian side of the wall was covered with such amazing art! I can't wait to see your photos.

I knew that there was a lot of street art on the wall but I had no idea that it was only on the Palestinian side and that the Israeli side was completely blank!