After a few days in the city, we came to a point that we just have to get out of Savannah.

Not because we hate it…on the contrary, we have considered pulling the emergency brake on this nomadic life to stop for 91 days in Savannah like our friends Juergen and Mike. After all, there is so much to see in dreamy Savannah. We just want to explore two places nearby that we kept hearing about, so we just hopped in our rental car and headed to two popular places outside of the Savannah city center—a graveyard and an island. If you’re looking for great day trips from Savannah, read on: As one of the stars of the film Midnight in the Garden of Good and Evil, the Bonaventure Cemetery outside of Savannah is one of the most beautiful we have ever visited, easily on par with our favorite Gothic cemeteries in London, the colorful cemeteries of Latin America or the famous Père Lachaise cemetery in Paris.

Entering through the main gates, we find ourselves on a tree-lined road, a slight breeze blowing through Spanish moss draping down from the centuries-old trees causing an eeriness among the calm. We lock up the car and wander aimlessly between the graves for hours, reading inscriptions on the tombstones that tell succinct life stories of German settlers, Jewish merchants and Southern generals buried here.

The cemetery is quiet and peaceful, and somehow traipsing over grounds filled with dead bodies takes on a romantic feeling. Bonaventure is set along the Wilmington River, and is home to unusual flowers, plants and trees, which add to its unique atmosphere as do the incredible obelisks, statues and tombstones which are as much works of art as tributes to the dead. Relaxed after exploring the serene cemetery, we are curious to see tiny Tybee Island, just outside of Savannah. A short 30-minute ride through the marshes, and suddenly we are in an entirely different environment. The ocean comes into view, and along the quaint main street colorful one-story buildings house surf shops, souvenir stores and seaside restaurants.

A wide sandy beach stretches around most of the island, inviting us to lay like lizards and recharge in the late afternoon sun. We could have rented a kayak or cycled around the island, but we are feeling lazy. Later on, we do make our way to the Tybee Island Lighthouse, which is Georgia’s oldest and tallest, and one of the few lighthouses from the 18th century that are still in use.

Like many places we hit on the road trip, we wish we would have planned in more time here on the beach, to laze around, maybe rent a cottage and take in the gorgeous sunsets at night…how could we know just how many places throughout the south would appeal to us so much. Instead, this is just a day trip, and we are back in town by nightfall. How to take this day trip from Savannah 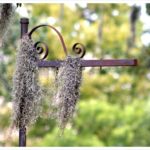 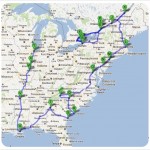 Observations from the halfway point on the Great American Road Trip
Click here to cancel reply.

Savannah is my favorite US city! Bonaventure and Tybee are great excursions as an alternative to Savannah.

Thanks, Christian! We loved our relaxing day in Tybee Island. Would love to return to Savannah for a longer time, maybe a month or two :)

I have actually never been to Savannah and it looks like a place I would enjoy... Love that you went to the cemetery and Tybee Island to explore the area!

Thanks Dayna! There are so many more places around Savannah to explore - we wish we'd have had more time! I hope you get to visit Savannah one day - such a lovely place.

Looks like you had rally good weather! We really want to go back to Savannah and it's surrounding beaches when it's summer. We were there in the winter time as well.

We had amazing weather the whole time we were there - it actually could've been a little bit cooler :) You should definitely go back in the summer and take advantage of the beaches!

Sounds like a wonderful day trip. I know so little about the south, but it seems really beautiful an tranquil.

It really is exactly that: tranquil and beautiful :) We loved the quietness of the cemetery - but Savannah also never felt very busy, although there were quite a few tourists there during our stay.

Great! I think you'll enjoy Savannah. It's one of our favorite places in the U.S. (with San Francisco and New Orleans).