Ceremonies surrounding death in Central America are as intensely sorrowful as vibrantly cheerful. There is a relationship with death which balances a process of deep mourning followed by colorful celebration. It begins with a dramatically slow funeral procession with hundreds of people dressed in black following a hearse as it winds through town from the church to the cemetery. The scene forces even unrelated bystanders to contemplate the sadness of death, if only for a few minutes. 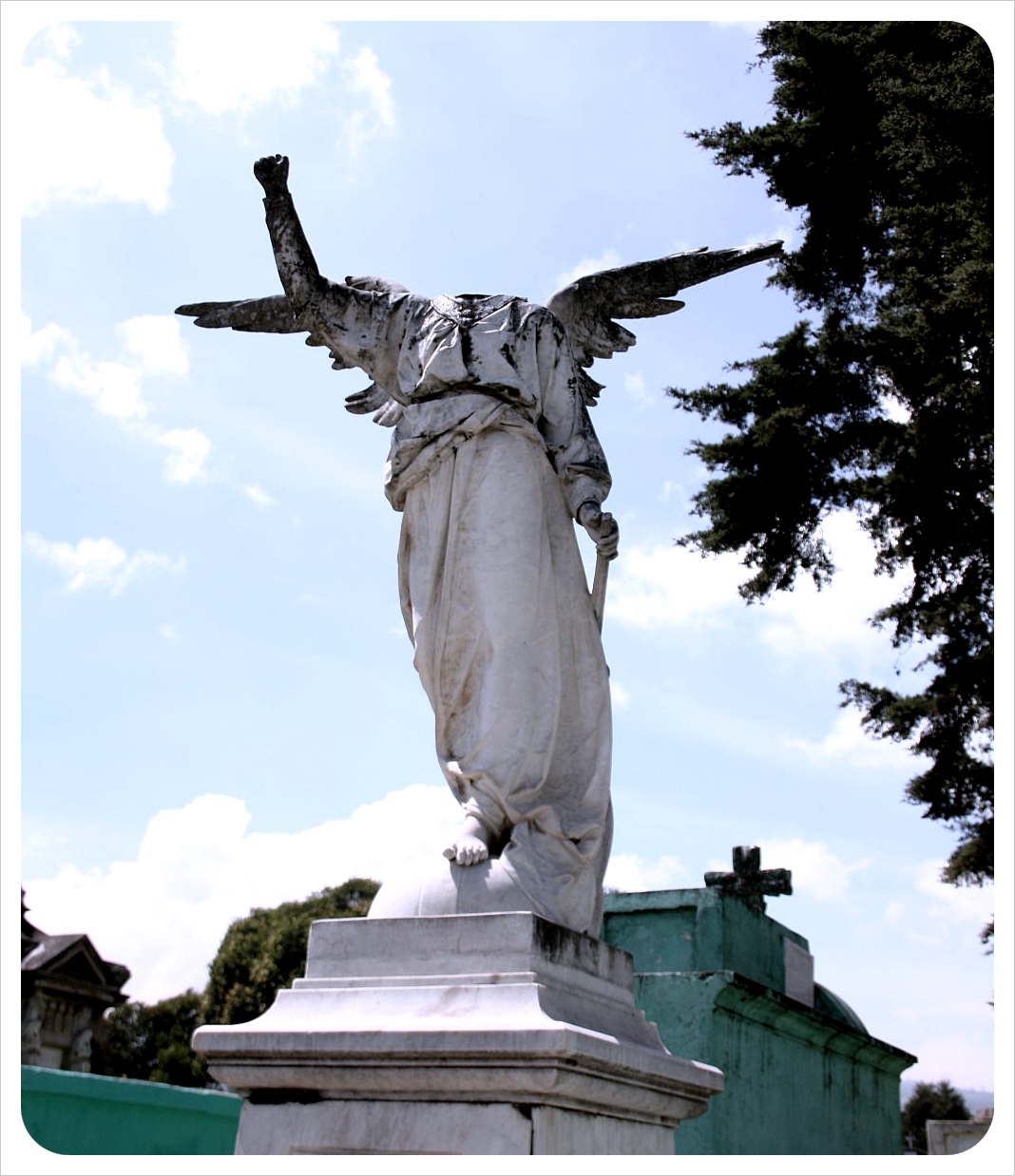 Yet cemeteries are vibrant places where celebrations like the Dia de los Muertos (Day of the Dead) see floods of people celebrating the dead among freshly painted and decorated pink, turquoise, mint green and bright yellow graves. These jovial events can be so casual that between family picnics and kite-flying on top of the graves, the dead below seem to play second fiddle to a good old fashioned family day out (we say ‘seem to’, as in reality, there are quite a few tears in remembrance of family and friends as well.) The style of burial, like so many aspects of life in general in Central America, has shifted from the sprawling decadence of large scale mausoleums to compact slabs of cement. One hundred years ago, families buried their loved ones in grand mausoleums in the shape of Roman-style buildings, gothic tombs or even Egyptian pyramids. While following generations moved away from such grandeur, the tombstones remained beautifully ornate and the surrounding space was roomy enough for eternity. 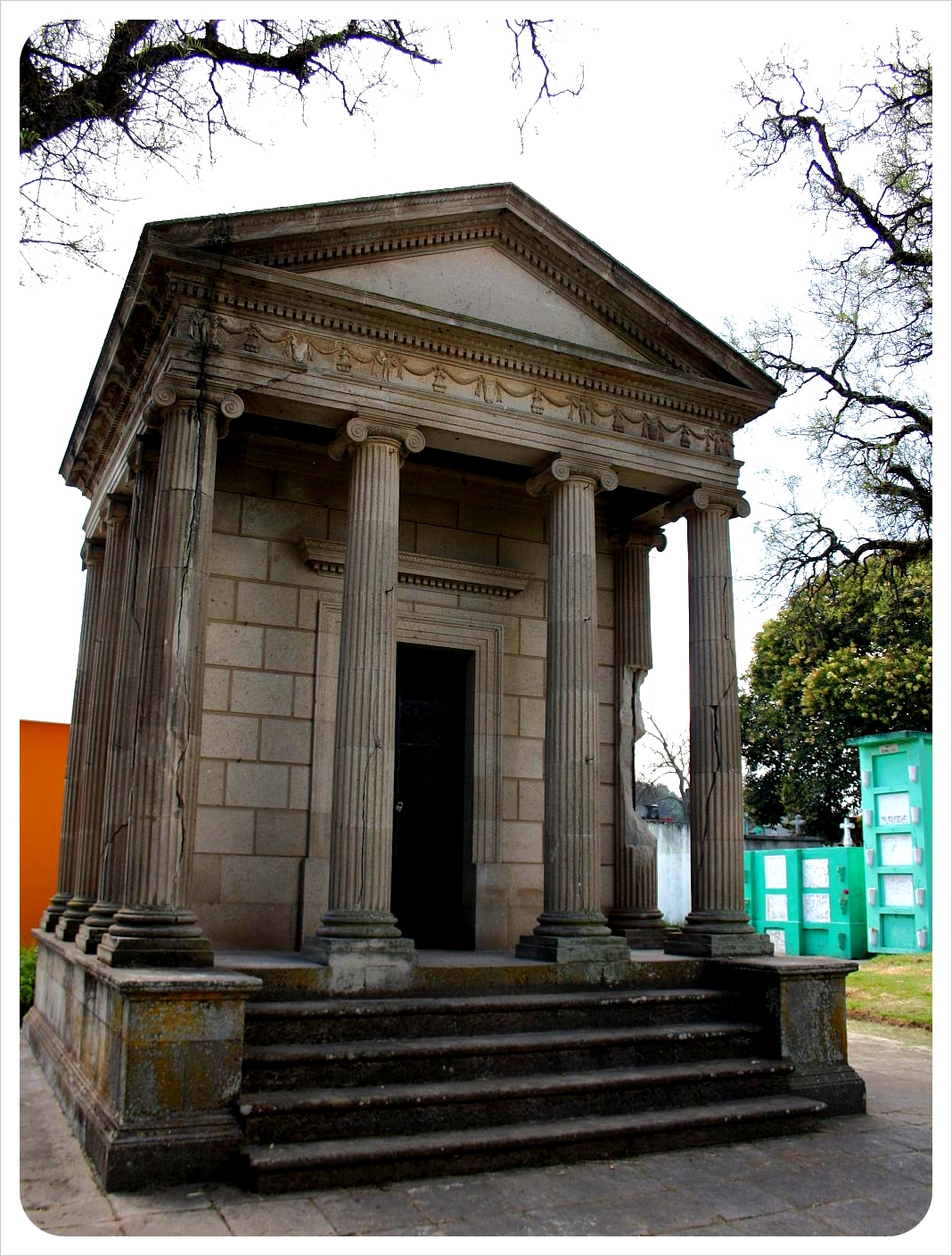 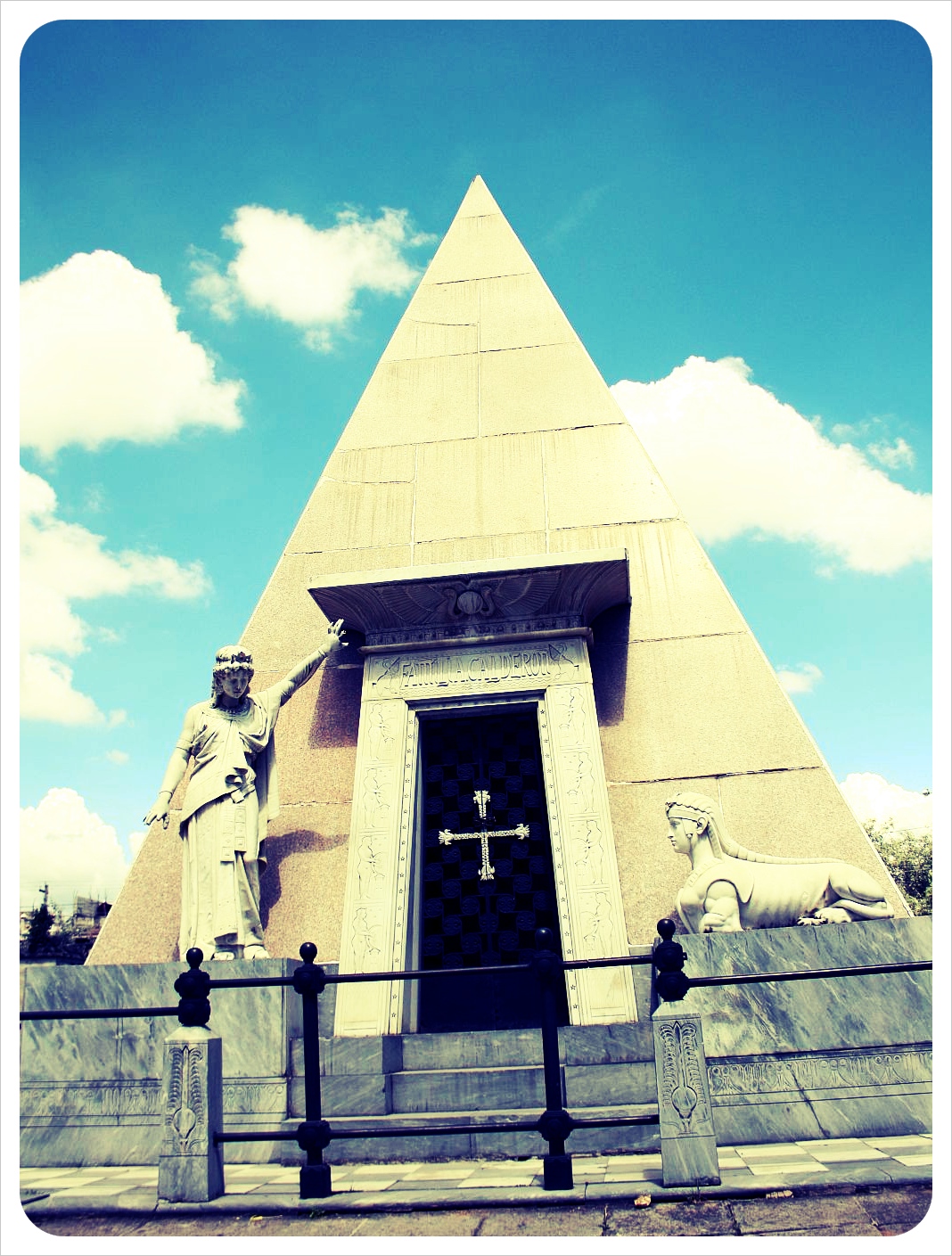 Today, the most recent plots in the cemetery of Quetzaltenango resemble apartment blocks, where anywhere from 6 up to 30 people are buried, bound to spend eternity in their own cramped ‘apartment’. 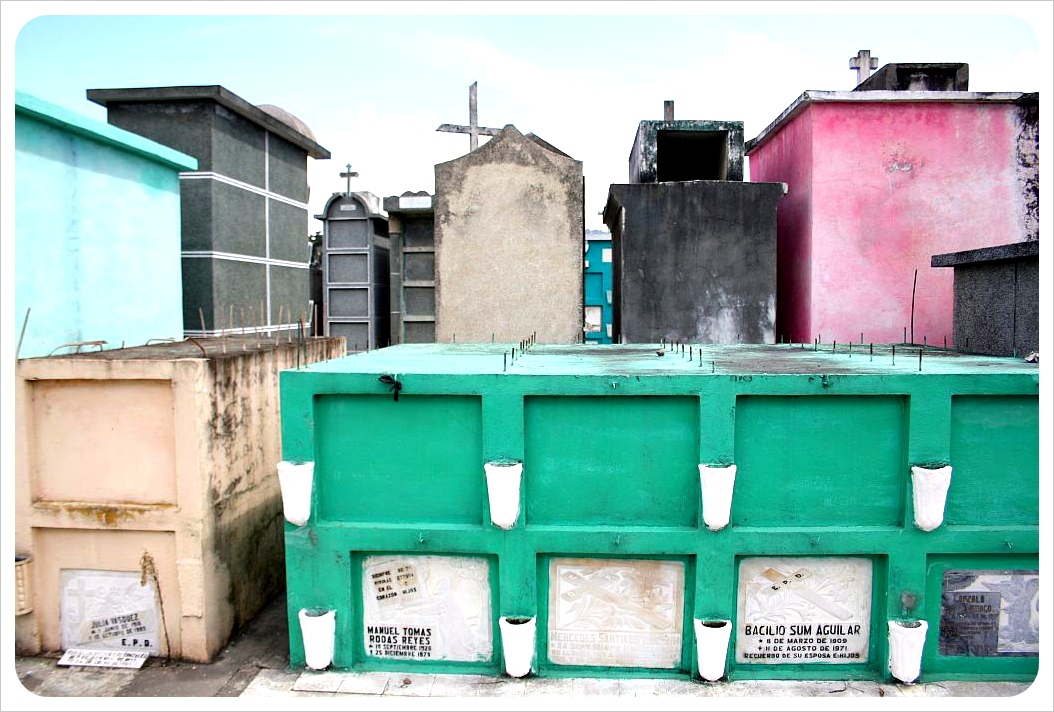 Maybe this results from financial hardship (death is costly) or perhaps out of decreasing space. It could also be cultural result that hinges on a slowly growing middle and working class who demand that cemetery plots are no longer reserved only for the rich and their immense mausoleums. 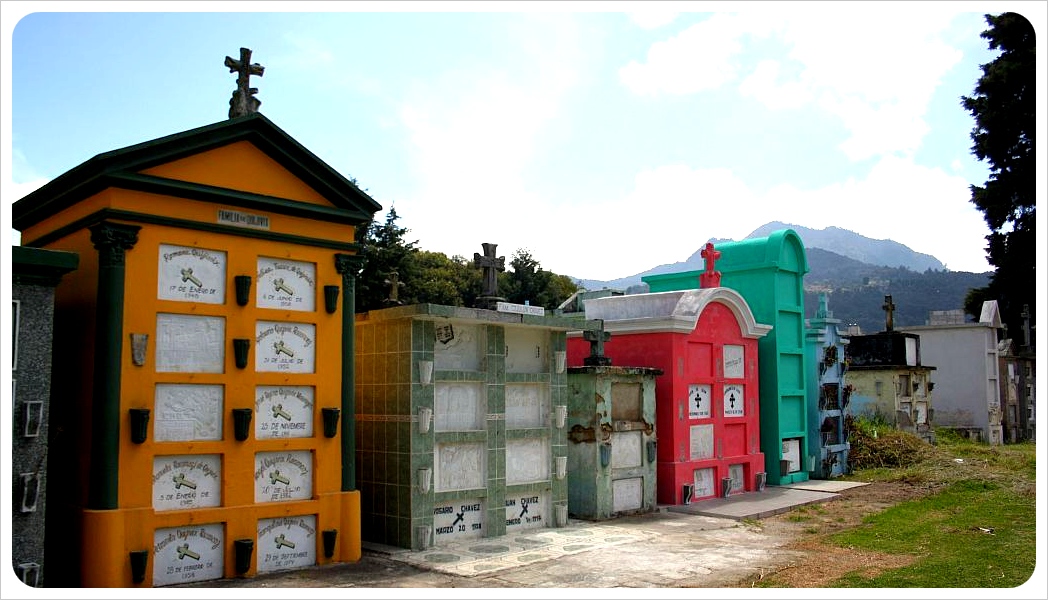 A more major difference in the cemeteries of Guatemala can be found toward the back, where the Maya population traditionally buries their dead. Here, dirt graves marked by wooden crosses with the name and birthday scribbled sloppily in permanent marker fill rows and rows of unkempt land. 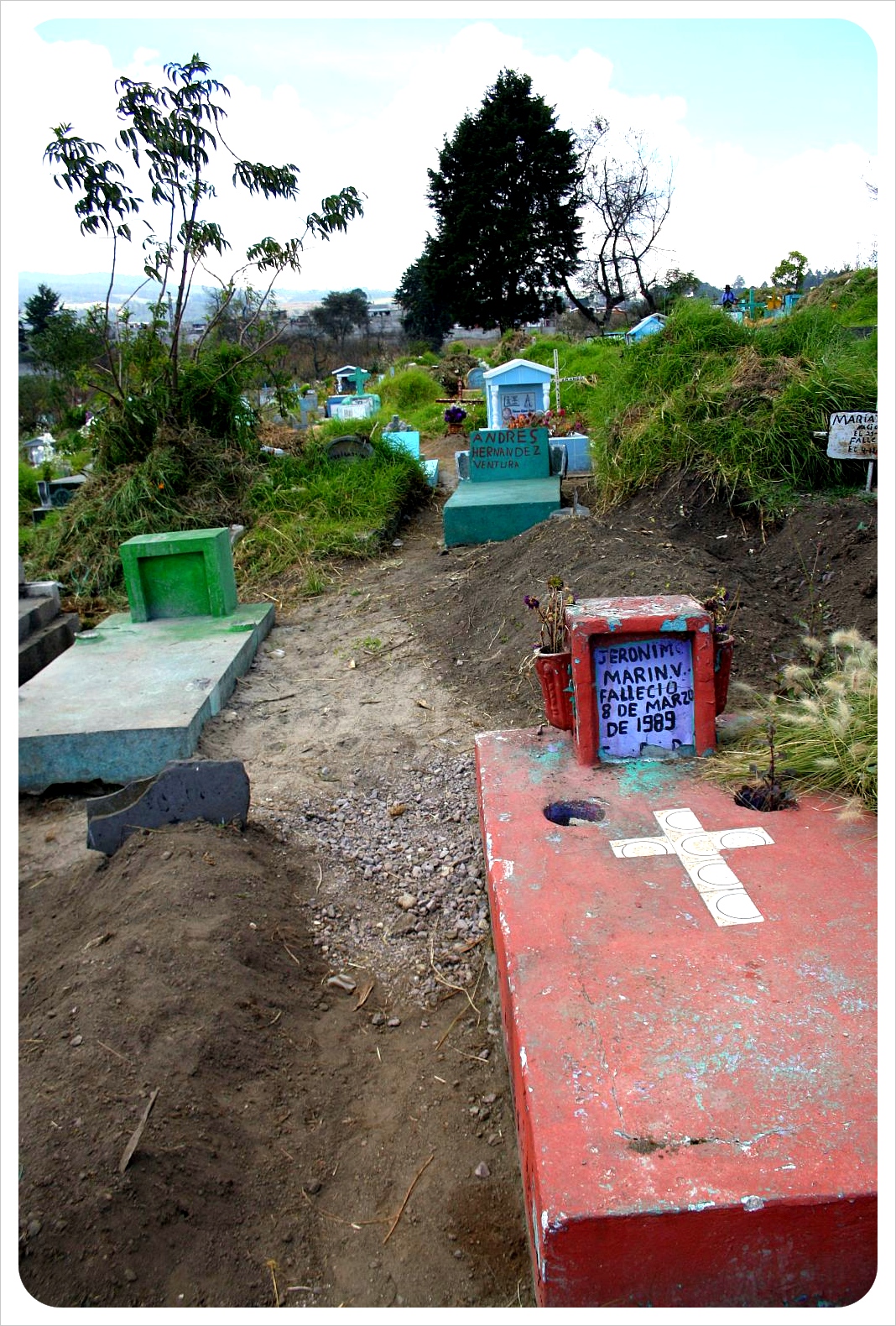 The festivities also take place here, on top of these piles of dirt that children play, vendors sell ice cream, and families picnic next to knocked-down signs which try to warn families of the dangers of eating with unwashed hands in this particular section of the cemetery. There is surely no area of the famous Parisian Père Lachaise cemetery (our favorite cemetery in the world so far), or any other U.S. or European cemetery, with graves like these, no matter how poor the family of the deceased. 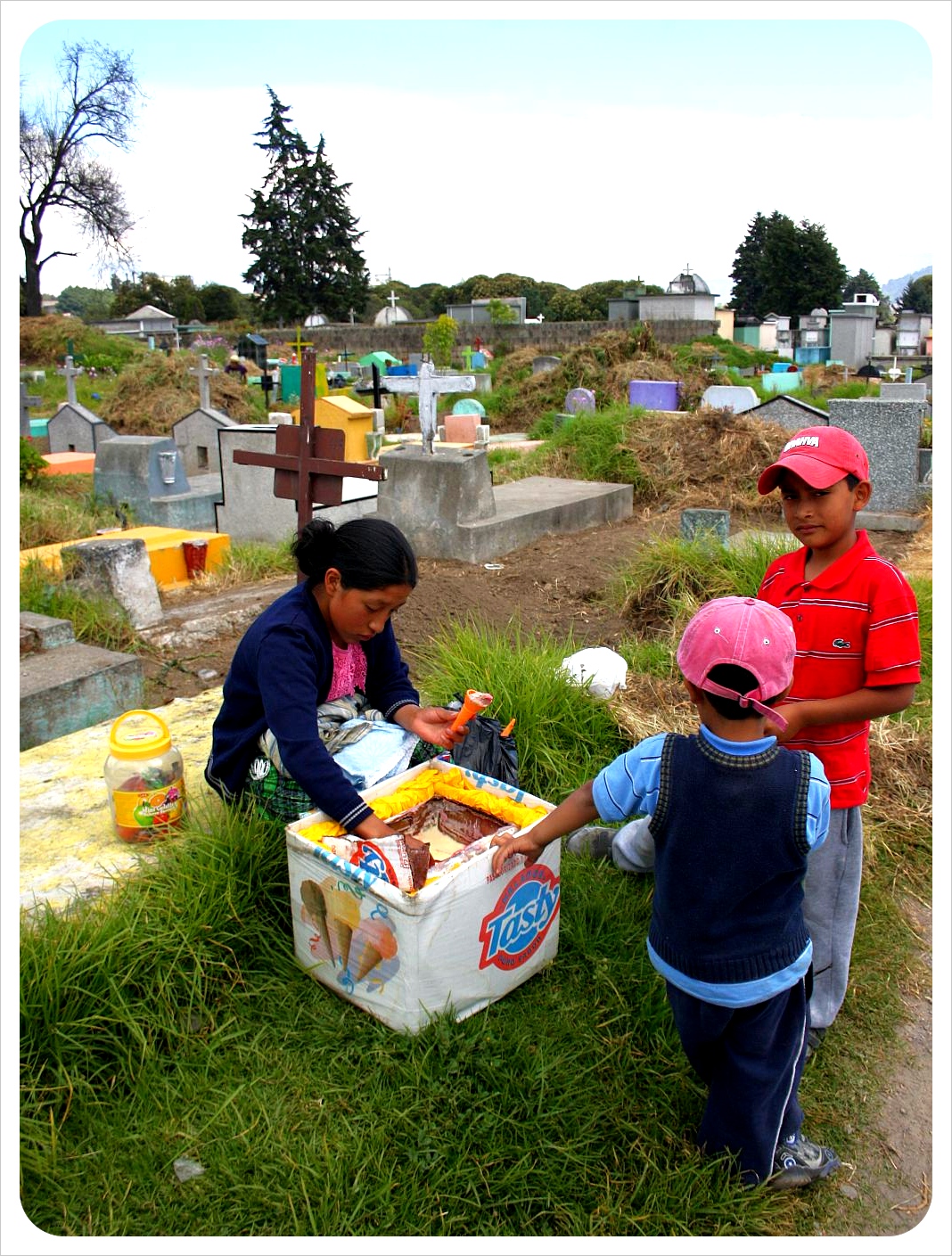 Even more shocking was the mass grave in the cemetery of Quetzaltenango. Exploring beyond these dirt graves lead to a mass grave where bodies are moved when surviving family members who could not afford to buy a plot do not pay the rent. The mass grave is also where hundreds of bodies were buried in 2010 after the torrential rains and mudslides killed and displaced countless villagers in the countryside.

Visiting one of Guatemala’s colorful cemeteries is a learning experience like no other. Especially larger cemeteries like that of Xela or Chichicastenango are reflective of the wider community in general, but in such a definite way. It is here, scrambling between the dichotomy of dirt graves and majestic mausoleums that things like the extreme class differences, treatment of the poor, and the country’s history and culture (in the form of festive celebration and mourning) become abundantly clear. 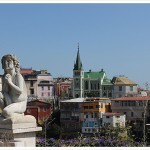 Valparaiso’s essence can be found among its dissidents 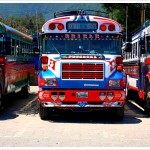 33 things we love about Guatemala - GlobetrotterGirls

[…] all white above-ground tombs form “cities of the dead,” more similar to cemeteries in Latin America than anywhere else in the US. The easiest to reach on foot from the French Quarter is the St Louis […]

Beautiful photos. Such a different approach to death when compared to my part of the world.

Thank you! We feel the same way - the Latin American way to celebrate death is very different to the way we approach it in Germany / the U.S. After having traveled through most of Central America now, we have to say that Guatemala has by far the most beautiful cemeteries!

Beautiful photos. Such a different approach to death from my part of the world.

Wow. You captured the colors amazingly! I can imagine that being in ANY cemetery make you confront your mortality - regardless of the celebration method.