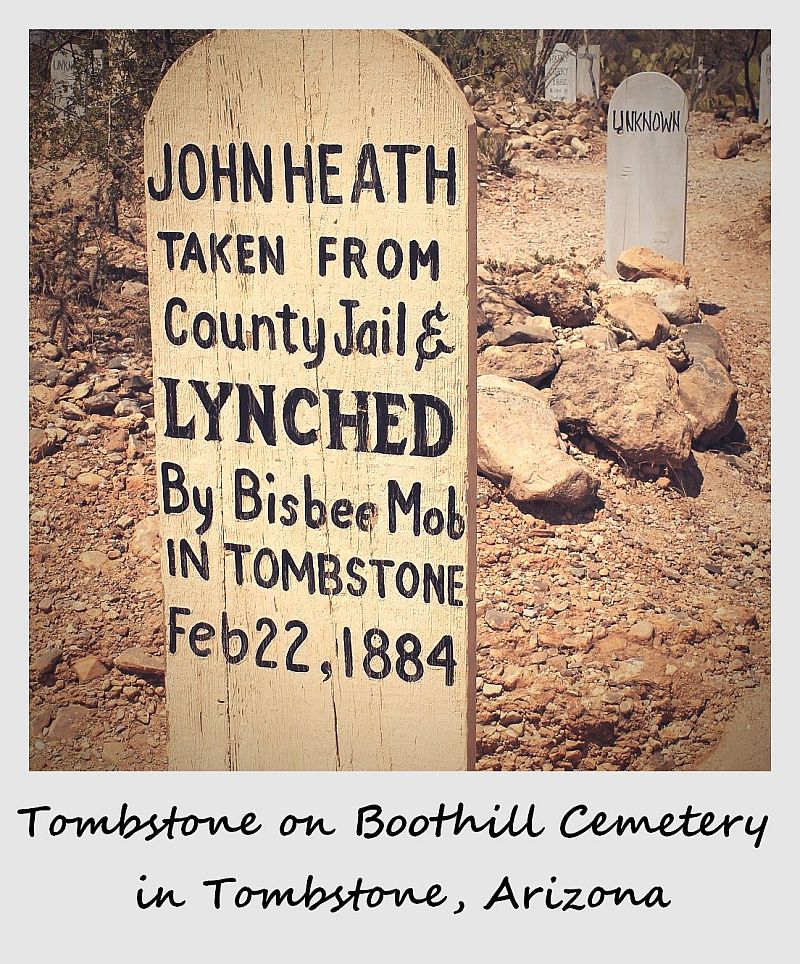 On our way down to the town of Tombstone, AZ we stopped at a cemetery unlike any other. Boothill Graveyard, known to most as ‘The Tombstone Cemetery” was created in 1878 as a burial place for the town’s first pioneers. The graveyard holds over 300 tough-as-nails folk who lived, fought and died out here in the unrelenting desert.

Each of the tombstones, just like John Heath’s in the picture above, tells a more complete story than ours do today, and some of them will give you a good chuckle. Not only do you find out when the person died, but also how – and sometimes this is written in the form of  a poem!  Unless the person buried there was done so without record, then the graves are marked unknown. There are just under 100 ‘unknown’ graves here.

One of the most fascinating aspects of Boothill cemetery is how international it is…this cemetery is darn near cosmopolitan! You’ve got plenty of immigrants like Chinese shop-owners, Jewish settlers, Mexicans, Dutch, Germans and Native Americans along with some of the most classic cowboy stories in history, including victims of the infamous gunfight at the O.K. Corral.

Some people buried here, like Old Man Clanton, were ambushed and murdered by Mexicans, while others, like a good girl gone bad named Margarita, were stabbed by their dance hall competition in an attempt to win over the attention of a man. Douglas Lilly, died when a wagon ran over his head while others were killed in poker games, some were hanged, some drowned in the monsoon floods, and plenty committed suicide in response to the rough and tumble life of southern Arizona in the late 1800s and early 1900s. You can read the transcripts of all tombstones in the graveyard guide right on the cemetery’s website.

Have a look at some of the other tombstones in our Flickr gallery below:

[…] It’s no wonder that Las Vegas is one of the most popular movie locations in the South West for any kind of old-fashioned Wild West movie. The entire town seemed like one big movie set! At the same time, it felt so unpretentious – and it is rare that you find yourself in a place that transports you back into another era in such a genuine way, without even trying (I am looking at you, Tombstone!). […]

[…] and I even made it to the famous western town of Tombstone (Boothill Graveyard visit included, of course!) as well as Bisbee, a former mining town close to the Mexican border […]

[…] than work time.. First, my friend Katie came to visit me and I found myself frolicking around old western towns, hiking in between giant Saguaro cacti, revisiting the beautiful San Xavier del Bac Mission and […]

Polaroid of the week: Road tripping in Southern Arizona | GlobetrotterGirls

[…] National Park, road tripping to nearby towns such as the Old Western town Tombstone (including its hilarious cemetery) and the charming mining-turned-artist-town Bisbee, and escaping the hot desert summer to cooler […]

It's cool that they tell more of a story - it's great to learn about the people who used to live in places you're visiting!