No trip to Mexico is complete without spending at least a few days in this dense, modern yet traditional, culturally-rich, forward thinking gateway to Latin America. However, although Mexico is relatively cheaper than the U.S. or Europe, prices especially in its bustling capital of Mexico City (or Mexico D.F. in Spanish, although more recently, the D.F. abbreviation people commonly used was replaced by CDMX for Ciudad de Mexico) can be much higher than most of the country. Luckily you can take a cheap flight to get there and then good planning can help you make the most out of a trip to Mexico City without breaking the bank – read on for our tips to travel Mexico City on a shoestring, and the best free things to do in Mexico City: 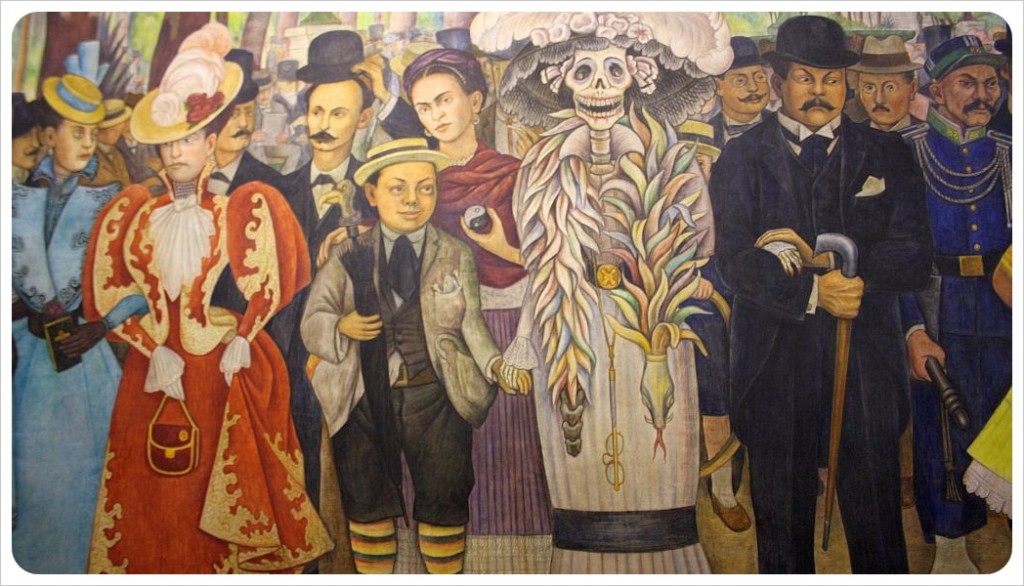 How to visit Mexico City on a shoestring

Mexico City’s Metro is clean, safe and very efficient – take it. Each ride costs a fraction of a taxi, and though there are no day passes such as in London or New York, each ride costs 5 pesos (US$0.23). There are warnings about taxi robberies or even kidnappings, but no such warnings exist for the Metro. Once inside, the Metro is much more well-lit than London, and the different lines are easy to navigate. Taking the Metro also allows you to explore several areas of the city in a day, with several stops on various lines bringing you right back home to the Centro Historico where your hotel /hostel is most likely located. 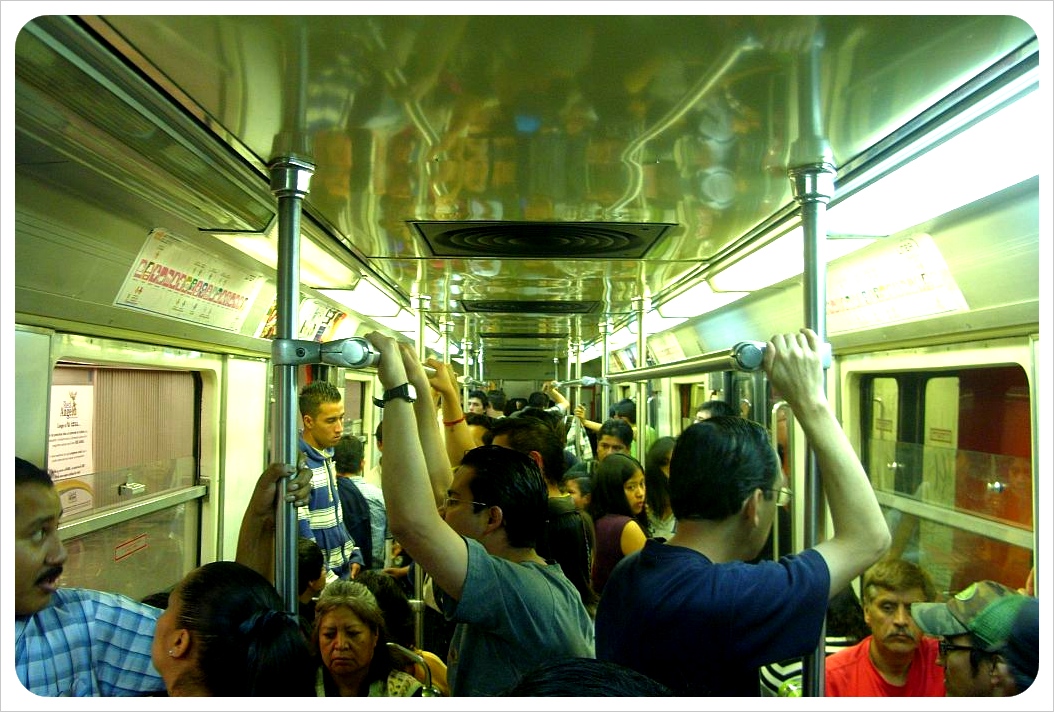 Note: As in any major city, rush hour in the Metro is cramped. Very cramped. The busier stations have ‘women only’ sections to the platform, with separate entrances which are not always so clear. If you are a female traveler, make sure to keep your eyes open for any separation of women and children from the men and follow the parade of women to that section of the platform.
*5 Pesos per ride / US$0.23*

2. Catch the free performances on the Zocalo

As in any town in Mexico, the Zocalo, or main square, in Mexico City is a major hub of entertainment activity. On each side of the Cathedral there are locals selling Aztec artisan goods (bags, rings, bracelets, masks, etc), and dancers dressed in traditional Aztec outfits performing several dances throughout the day. Tips are welcome of course, but the performances are free. Grab some of the nearby street food and enjoy the organized chaos of traditional outfits, music and dancing.
*free* 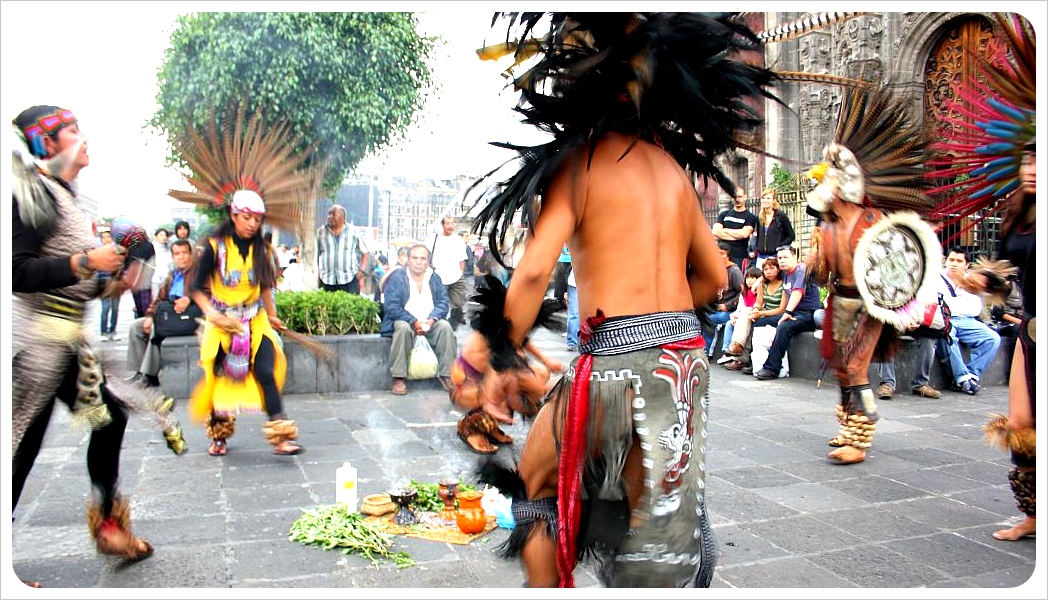 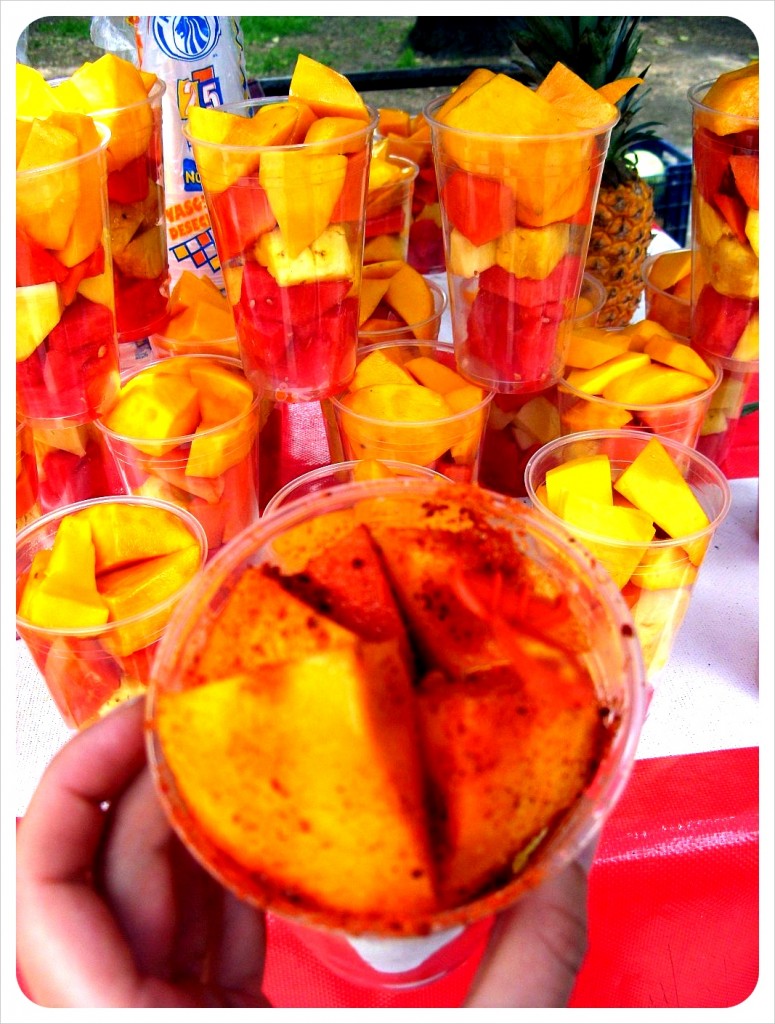 Mexicans love to eat, and there are food vendors lined up in every possible space where people congregate – outside of the metro, on any square, in any park, we’ve even seen quesadilla and tamale vendors right outside of a hospital entrance! The food choices vary per region, and Mexico City was by far the most enjoyable for us Globetrottergirls. The best street food in the city was located around the Alameda Central (a beautifully designed park in the center) and the Zocalo. Foods include Elote (corn on the cob), Tlayudas (thin crunchy tortillas topped with refried beans, lettuce, salsa and cheese), Tacos, popcorn, cups of easy-to-eat pre-cut strips of fruit including mango, watermelon, cantelope, jicama, even cucumber, which can be sprinkled with as much lime and chili powder as desired.

The more we travel through Mexico, the more we realize that each sit down meal can take two hours from the time you sit down to the time you finally get ‘la cuenta’, or the bill – which is often much higher than you would expect. Street food, on the other hand, is cheap, quick, ‘clean’ and so delicious, plus a great way to get a broad sample of Mexican culinary delights. Contrary to the Mexican food nightmare myths, after eating almost exclusively street food for all ten days of our stay in the capital, we did not get sick once. Grab a Tlayuda for around U.S.$1.00, two tacos for U.S. $0.40 or corn on the cob / fresh fruit for $1.20. Use this comprehensive guide to hunt down the best street food in Mexico City.
*$0.40 – $2.00, depending on food*

Mexico City is overflowing with culture, and its hundreds of museums and galleries are already cheap compared to Europe of the U.S. However, with some planning you can visit several on their ‘free days’, which make them one of the best free things to do in Mexico City. (Side note: If you don’t happen to visit Mexico City on the day the museum you’d like to visit offers free admission, no worries – the museums in CDMX are all inexpensive, definitely within a Mexico City on a shoestring budget.)

The City Museum (Museo de la Ciudad de Mexico) displays archeological pieces that show the transformation of the Valley of Mexico from the Aztec capital to what the city is today (mediocre) and temporary art exhibitions (excellent) and is free on Tuesdays. Pino Suarez 30 & Republica de El Salvador, Tuesday to Sunday: 10:00 am – 6:00 pm.

The National Museum of Art (Museo Nacional del Arte) has 33 halls filled with Mexican paintings, sculptures and ceramics dating back to the 16th century and is free on Sundays. Calle Tacuba 8, Tuesday to Sunday: 10:30 am – 5.30 pm.

The Museo Dolores Olmedo in Xochimilco (Av Mexico & Antiguo Camino a Xochimilco) has a very complete once-private art collection (including 25 Frida Kahlo & 137 Diego Rivera pieces), archeological pieces and china from the Far East plus gorgeous gardens with free-roaming peacocks and rare hairless Mexican dogs and is free on Tuesdays. Tuesday to Sunday: 10:00 am – 6:00 pm. 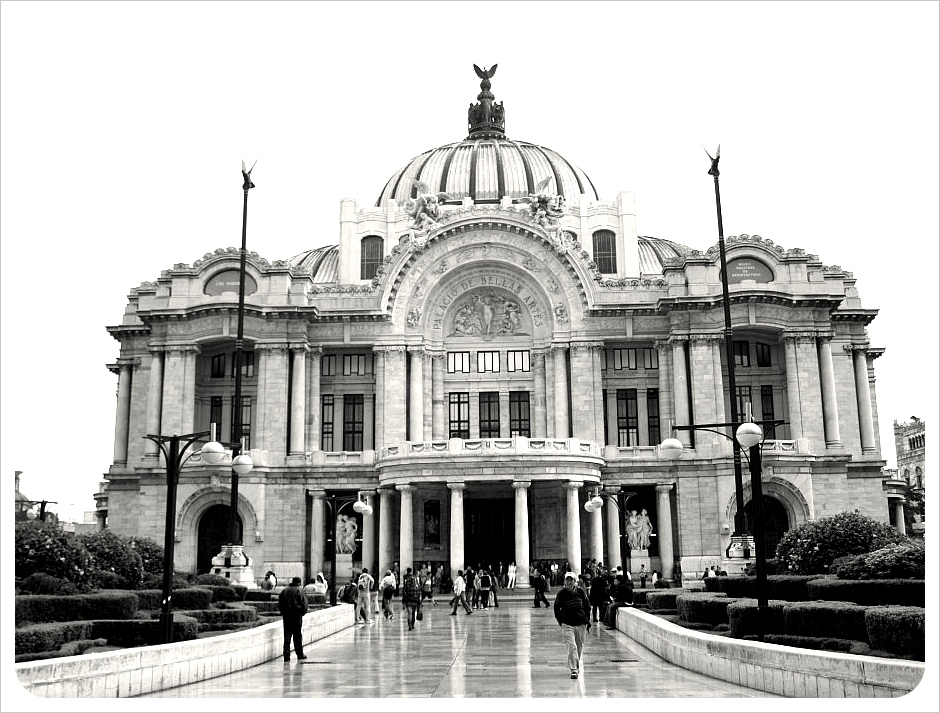 Other free museums include:

Dozens of Mariachi bands from several regions of Mexico congregate on Plaza Garibaldi, just north of the ‘Centro Historico’, serenading lovers and providing festive party music for groups who all gather to take part in the Mariachi Madness. For a fee (amount depends on your bargaining skills) a Mariachi band will serenade you personally, but just sitting on the Plaza, taking in the atmosphere and listening to the collective cacophony of Mariachi music is free and really very entertaining. This was one of my favorite free things to do in Mexico City – I returned several times to listen to the mariachi and to people watch.
*free* 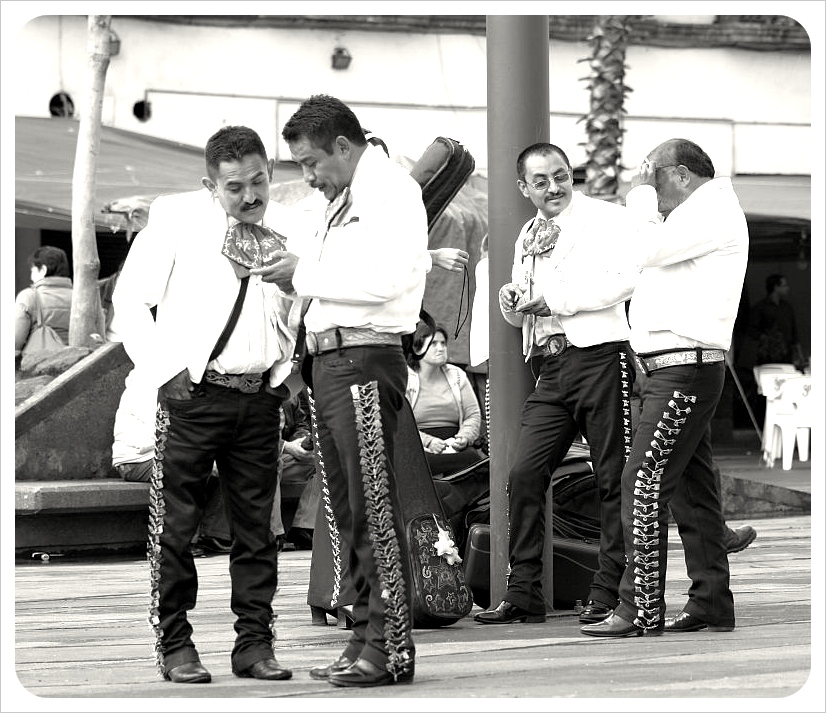 The Palacio Nacional is located on the Eastern side of the Zocalo (the entrance is on its north side, in Calle Moneda) and it is used as a government building. It has been the seat of political power since Aztec times and it is here where on every 15 September, the President rings the ‘Liberty Bell’ and shouts the traditional !Viva Mexico! in celebration of Mexico’s independence. The Palacio is famous for its architecture and Diego Rivera’s grand mural “Epic of the Mexican People in Their Struggle for Freedom and Independence” which stretches over three walls in the main staircase, and several other murals. It also houses the National Garden (and a large number of cats!) which can be visited as well.
*free, bring your passport for entry*

The capital’s largest park doesn’t cost a penny and will keep you busy for hours. It spreads out over 1,800 acres (7.3 km2) and features several lakes, some of which rent rowing boats or kayaks, or just sit on the side and feed the hungry fish (fish food available around the lake). For your own hungry belly, there are food vendors galore throughout the park, so grab some popcorn, chips or elote and make your way to visit Diego Rivera’s famous fountain – ‘Fuente de Tlaloc’ or the Botanic Garden.
*free* 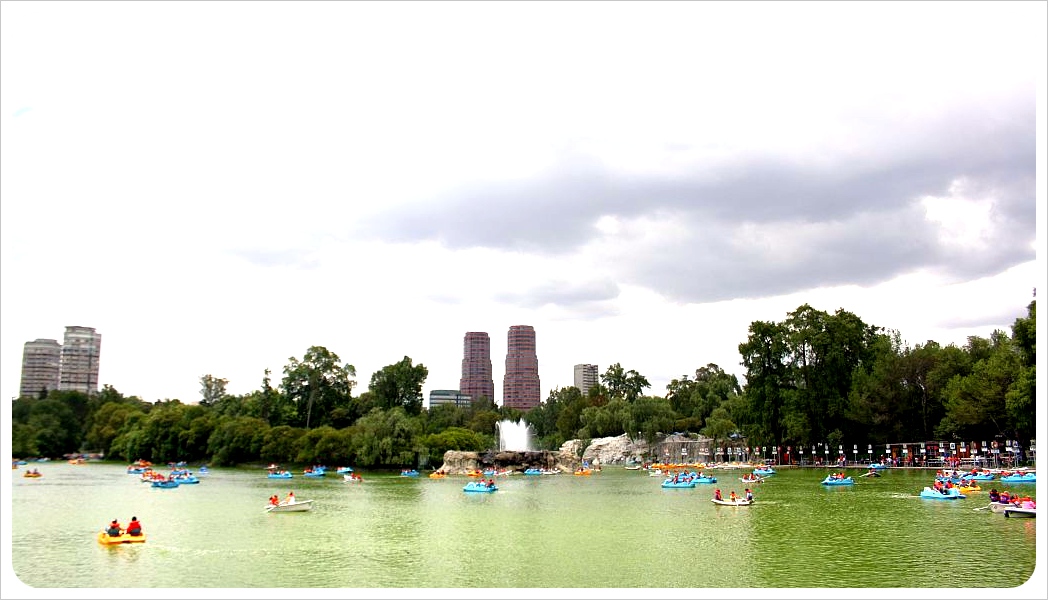 Close to the Anthropology Museum (extraordinary anthropology museum exploring all major cultures from Tolmecs to modern-day Mexico (MXN80 / US$3.70), check out the Danza de los Voladores (Dance of the Flyers), a ceremony in which four dancers launch themselves off a 30 meter pole on ropes in their traditional clothes, while a fifth dancer stays on top of the pole and leads the other four by playing a flute – great fun to watch, and one of the best free things to do in Mexico City.
*free* 8. The Zoo in Chapultepec Park 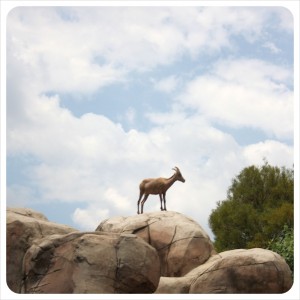 Mexico City has a free zoo, located right in its most popular park. There are several ticketed sections, such as the insect house, but the main free parts offer a selection of animals as big as any other major free zoo, housing more than 250 animal species including panda bears, giraffes, seals, monkeys, polar bears, hippopotamus, jaguars and elephants. The zoo is open daily from 9.00am – 4.30pm. and particularly of interest for families visiting Mexico City on a shoestring.

Tip: If at all possible, avoid a weekend visit as Mexicans flood the park and overcrowd the zoo.
*free*

9. A stroll through Polanco

A visit to Polanco will show you a completely different side of Mexico City. Located west of the Zona Rosa, it can be combined with a stroll down the Paseo de la Reforma or a visit to Parque Chapultapec which lays to its south.

Polanco is Mexico’s luxury area, where its well-heeled inhabitents reside. Off the tourist track, Audis, BMWs and Lexus SUVs line the streets along with designer stores (including an Apple store), Starbucks and various high-class restaurants on and around Presidente Masaryk. Parque America and Parque Lincoln are small, very clean parks with interesting art sculptures, and Polanco is one of the few places in Mexico City where joggers, dog-walkers and even rollerbladers have the space and well-paved streets to enjoy a run/walk/blade in relative peace and quiet.

The architecture in the area is very different to the rest of the city, with well-designed two story ‘suburban’ homes, and the area is also much less polluted, congested and boisterous.
*free / 10 Pesos for a return trip on the Metro* Coyoacán is the oldest part of Mexico City, and is well-known as Frida Kahlo’s ‘hometown’. Her Casa Azul is now a museum which houses the art and personal effects of both Frida and her muralist husband, Diego Rivera. The Casa Azul runs at MXN246/ US$11.50, and any Frida fan should not miss this mecca of one of Mexico’s most passionate female painters, even though the steep admission isn’t quite a Mexico City on a shoestring item. Make sure to book your tickets online to avoid long lines or no available slots when you get there.

A visit to Coyoacán is a peaceful pleasure, with quiet squares, churches, cobble-stone streets, parks, a clean, bright indoor market and great shopping and restaurants for a range of budgets. Artists, hippies and bohemians alike have been attracted to this area since the 1960s and 1970s and today Coyoacán is said to be one of the cultural centers of the capital. The Guardian has an excellent guide to Coyoacan beyond Frida Kahlo’s Casa Azul.

The easiest way to get to Coyoacán is by Metro (Line 3, get off at Coyoacán or Viveros)
*10 Pesos for a return trip on the Metro*

Have you visited Mexico City on a shoestring? Feel free to add your tips in the comments below! 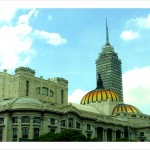 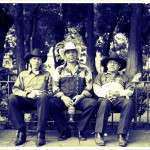 Views from above: Mexico City - GlobetrotterGirls

[…] to 8pm, MXN140 (just under US$7) – certainly worth the price, even if you’re visiting Mexico City on a shoestring. The entrance fee allows you one hour at the viewing platforms and includes a museum on the 38th […]

[…] arrival in Mexico City, we were welcomed by Mariachi bands & folklore […]

33 things I love about Mexico - GlobetrotterGirls

[…] City – It’s a magnificent mega-metropolis which requires some patience and understanding, but Mexico City is a hub of creative, forward-thinking groups and individuals with art, markets, and music […]

Museo Dolores Olmeda | Well, How Did I Get Here

[...] to a suggestion from The Globetrotter Girls website on Tuesday I made the 45 minute long Metro and Light Rail journey from the Centro Historico [...]