‘You can swim with turtles there.’ That sentence was all I needed to hear in order to change my travel plans once again and to include a detour to Apo Island in my Philippines island hopping trip. A short conversation with a girl from Canada who I had met on Siquijor Island had just returned from Apo Island and was telling me all about her amazing snorkeling excursion. I might not get the chance to swim with whale sharks on this trip, but how I could I turn down the chance to snorkel with turtles, especially since I was ‘right there’, just a short 45-minute ferry ride from Dumaguete from where you could do the snorkeling trip as a day excursion. 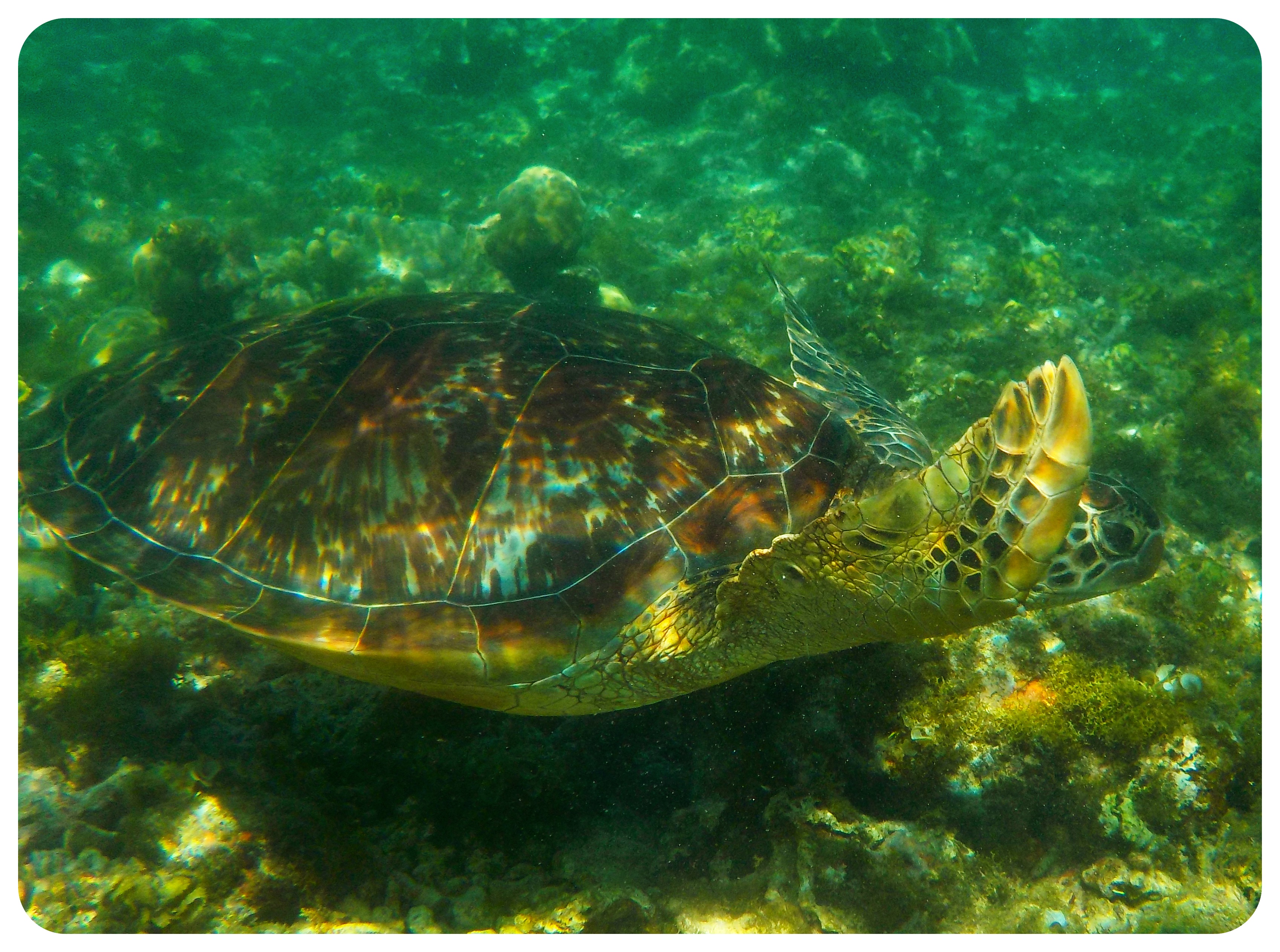 She had also recommended Harold’s Mansion hostel to me, and two days later I found myself checking in at Harold’s. The first thing I did there? I signed up for the next day’s Apo Island tour. For 1,000 Pesos (US$22.30), I would get to swim at three different snorkeling spots around the island, as well as food & drink on the boat (fruit, coffee, water and a sandwich for lunch.) 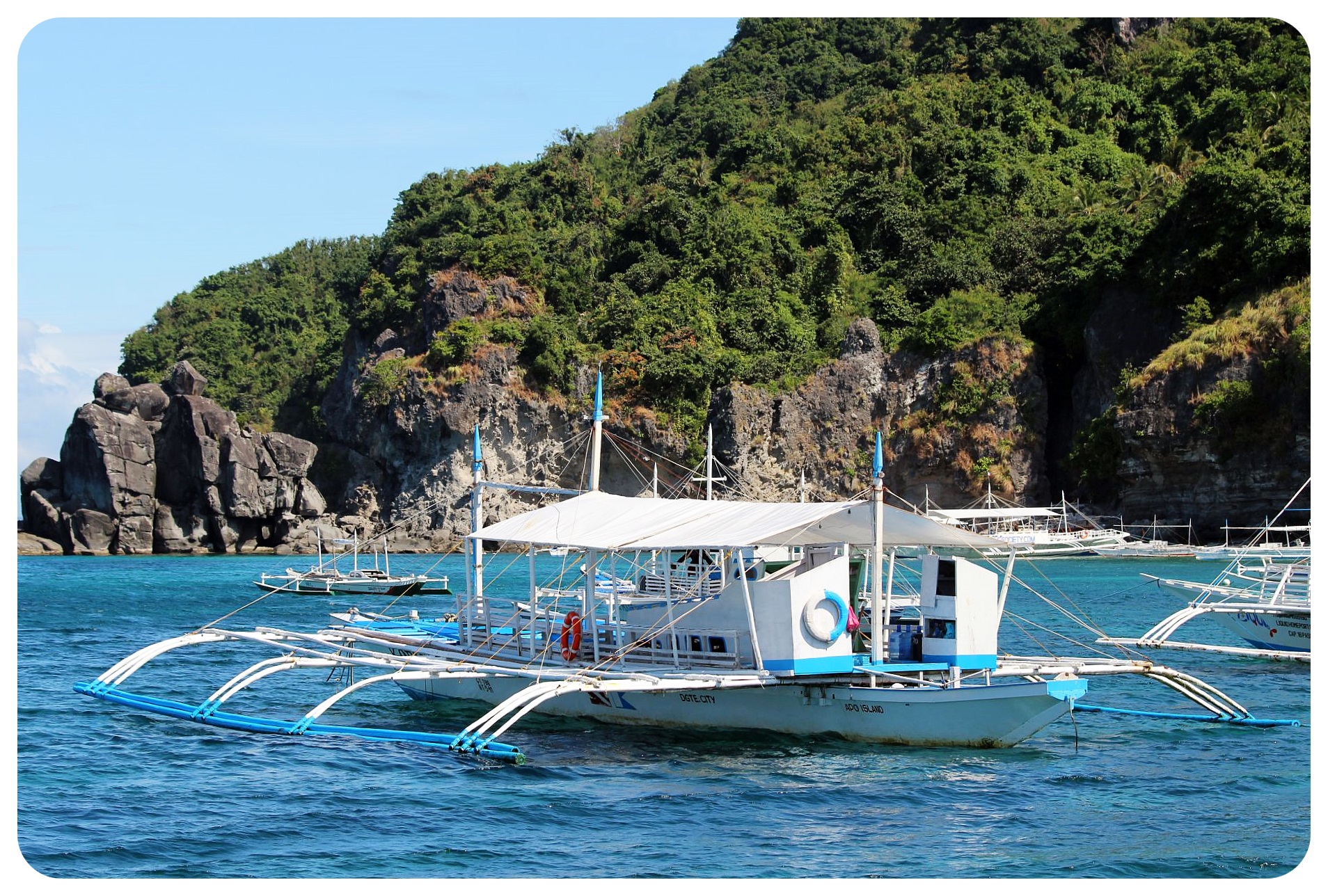 The next morning we headed out bright and early at 7am and were on the boat thirty minutes later – Harold has a diving base in Dauin, a popular dive spot right on the beach a few miles outside of Dumaguete. Our group split in two in Dauin: some people went diving there, the rest came to Apo Island. That’s when I learned that two couples would actually stay on the island rather than just snorkel or dive with us, and as soon as the shore came in sight, I wished I had signed up to spend the night, too. 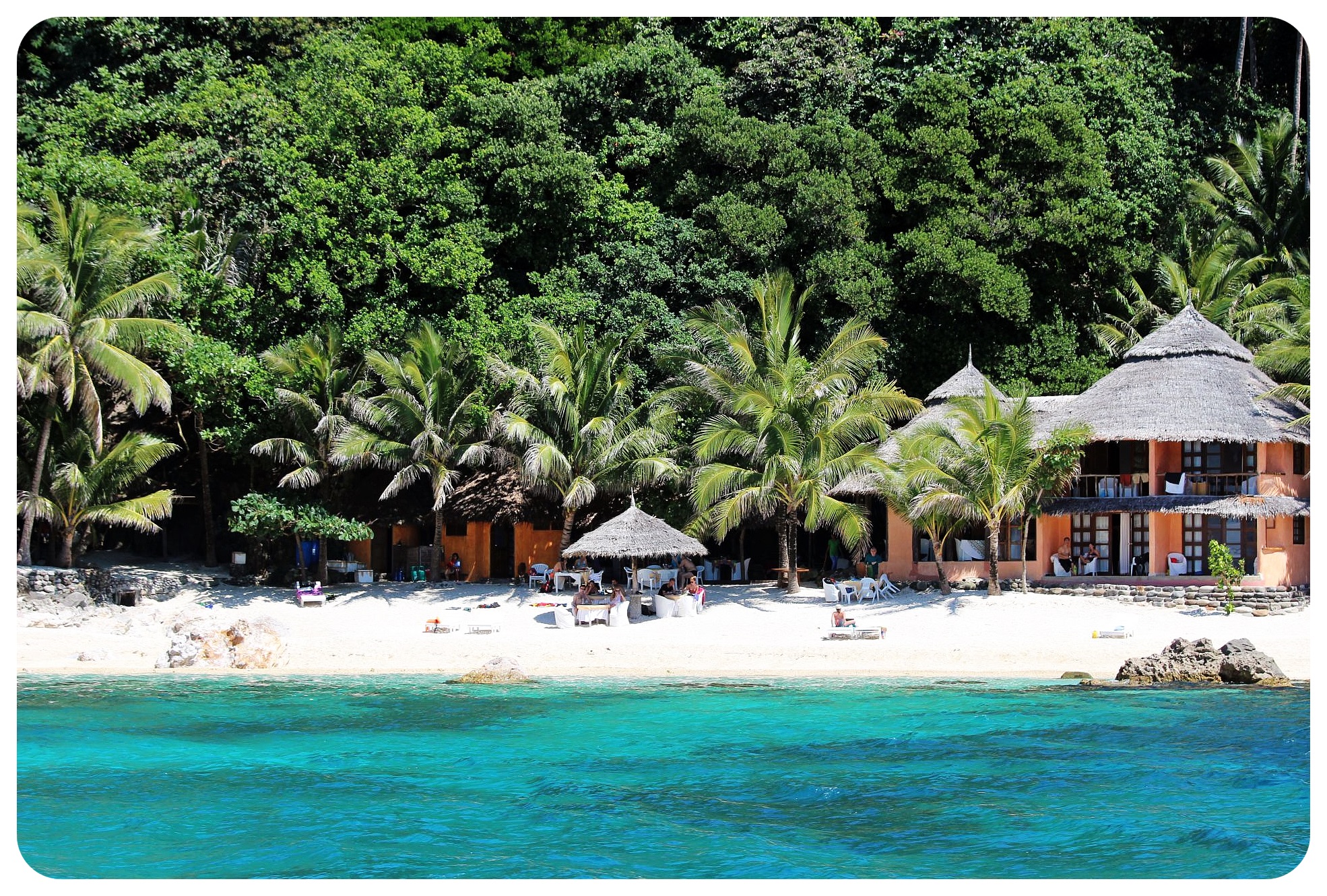 There wasn’t much more than a few fishing huts right by the water, but the small sand beach next to them had some great looking bungalows which would’ve been perfect to combine snorkeling with sunbathing and enjoying the tranquility of this tiny island at night. The resort is the Apo beach resort (pictured above), by the way, and if you decide to visit Apo Island and spend the night there, I think this would be the perfect choice. 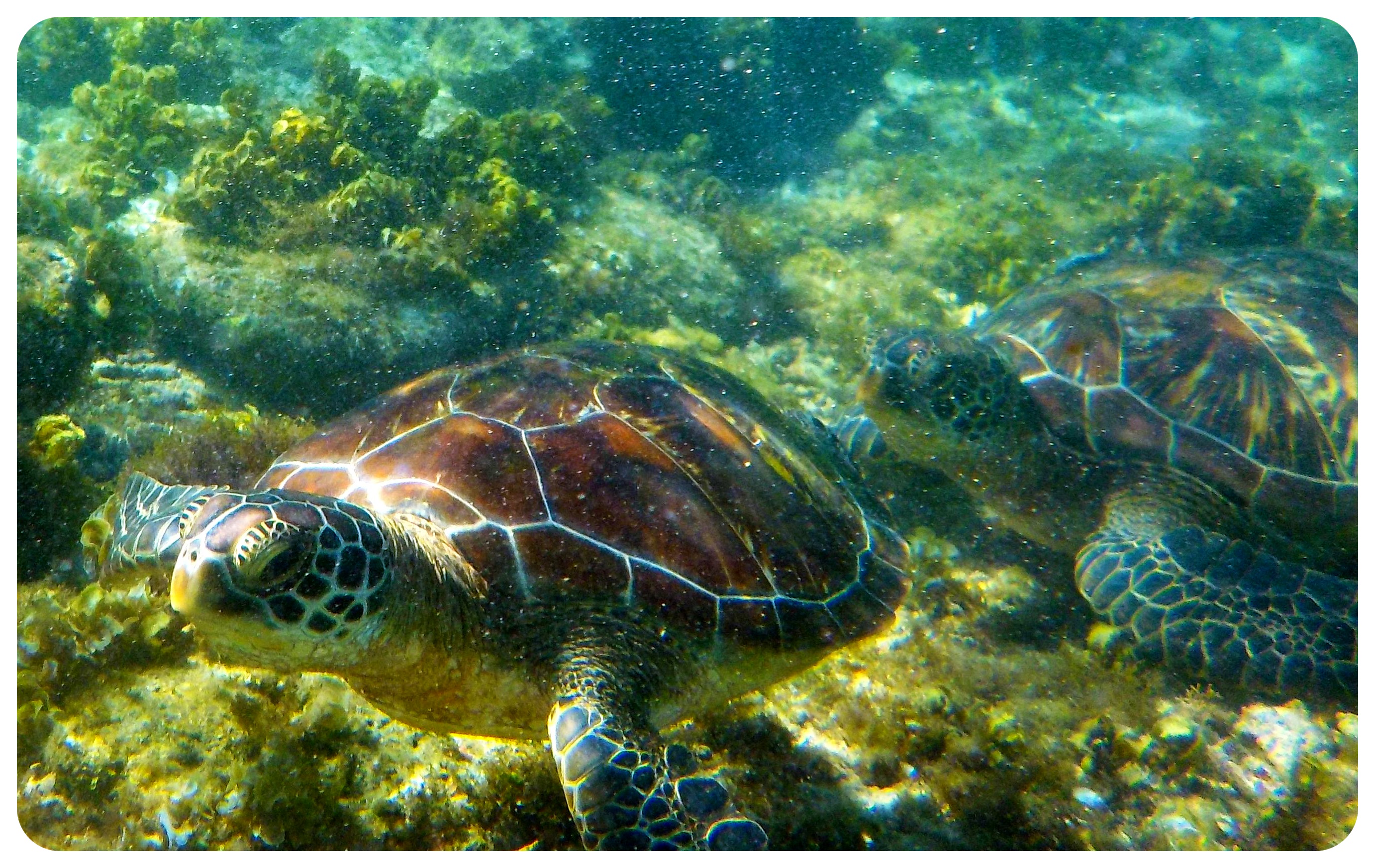 This snorkeling trip was the first time I got to try out my new underwater camera which I had specifically bought to document me swimming with whale sharks. A quick word on the whale sharks: while one of the two popular whale shark swimming spots in the Philippines, Oslob, was very close to Dumaguete, I was told that there, the whale sharks were more or less captivated, fed by the local tour operators in order to keep them there, interrupting their natural migration patterns. Donsol, the other popular whale shark spot in the country, is the place where this wasn’t the case. A heads up to Lonely Planet for mentioning that they weren’t endorsing the tours in Oslob. I didn’t have time to head up to Donsol (on Luzon Island) on this trip, but that’s just another excuse to return to the Philippines soon. 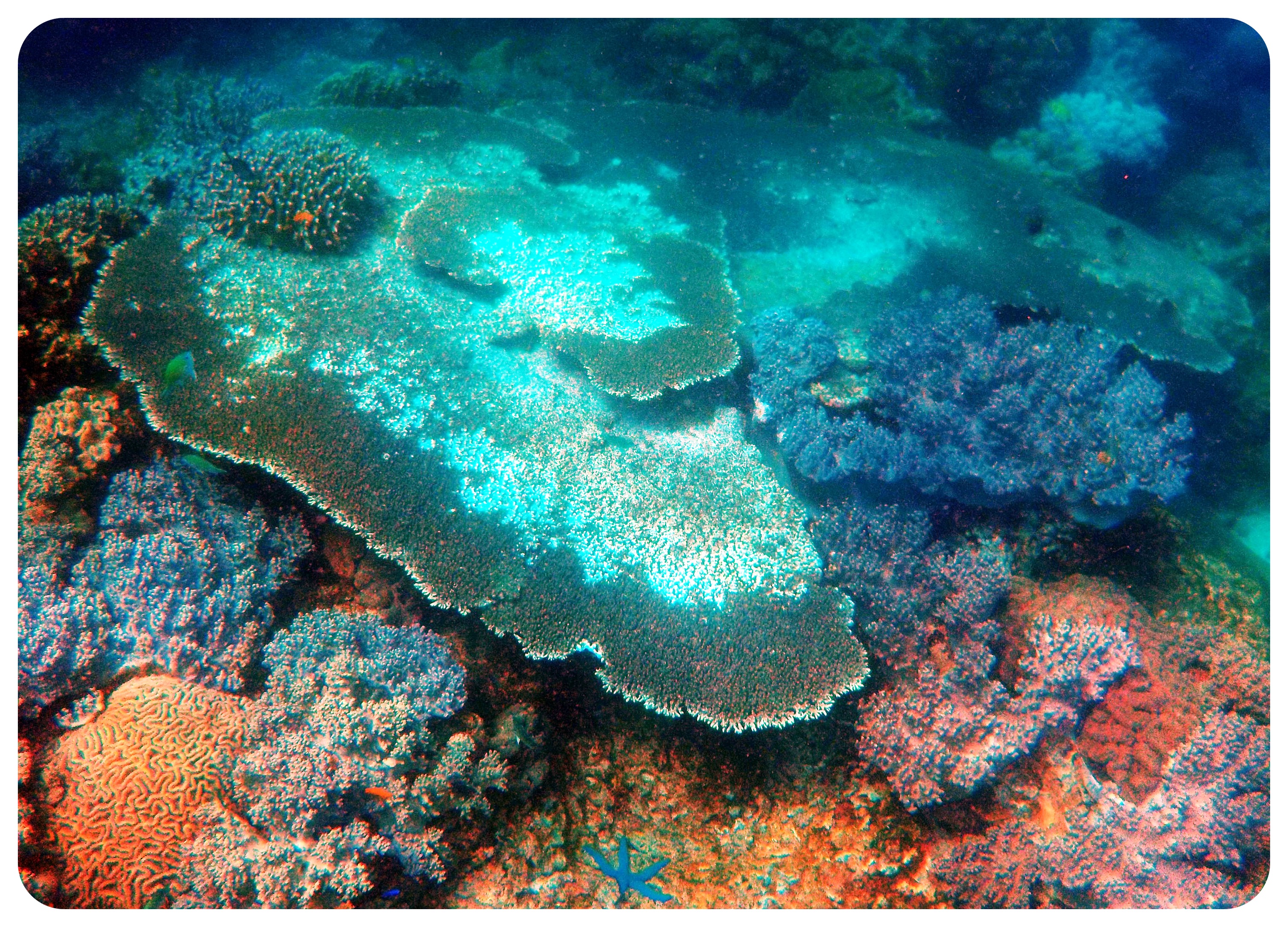 The sea turtles totally made up for not swimming with the whale sharks, and I couldn’t believe how close I could get to them. I was just as close as I had been when I witnessed the turtle arribada in Costa Rica, only this time I was in the water with them instead of on the beach. 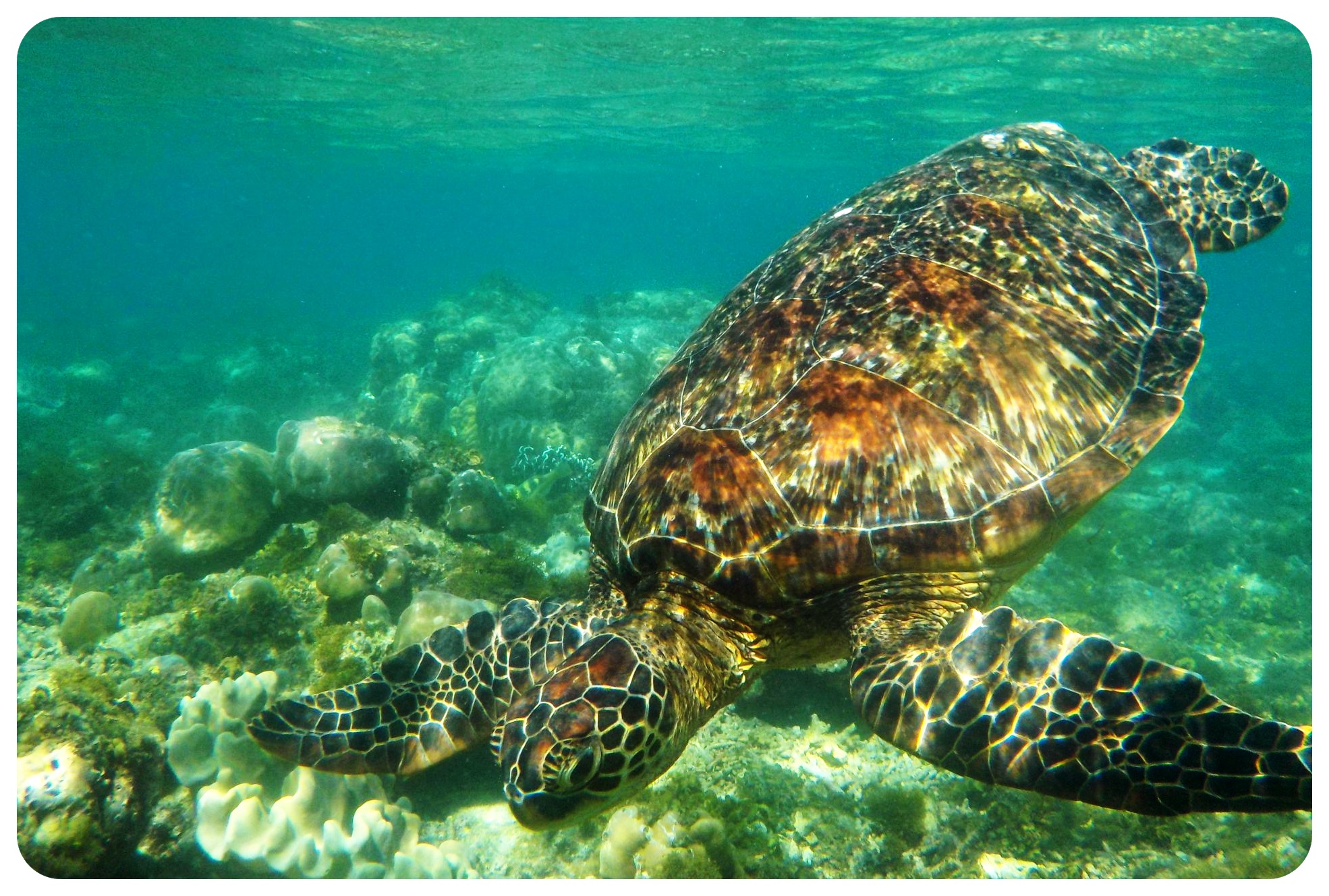 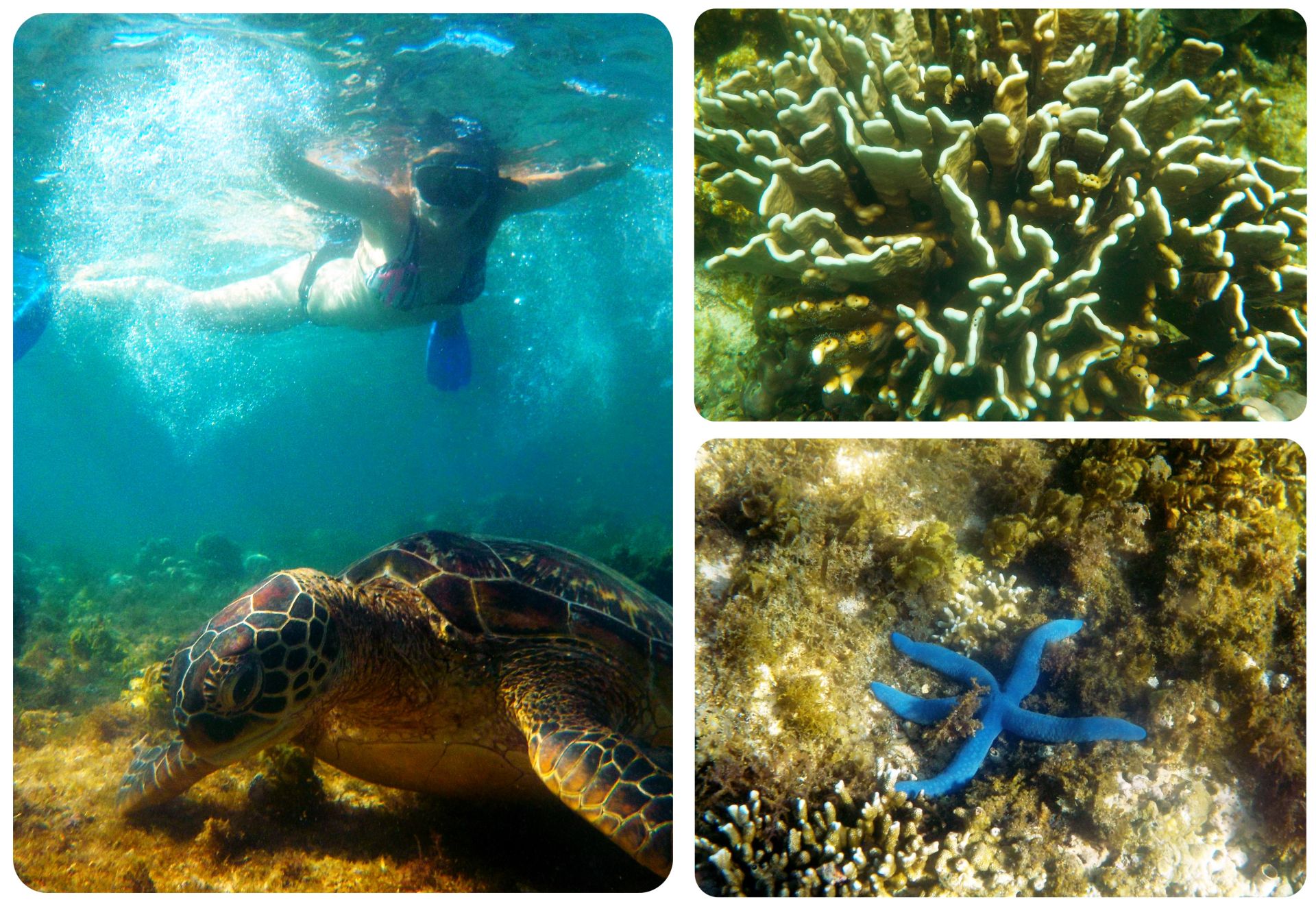 Swimming with them, watching them eat and occasionally swim up to the water surface to catch air was incredible, and definitively one of those moments where I had to pinch myself, thinking how lucky I was to experience things like this. 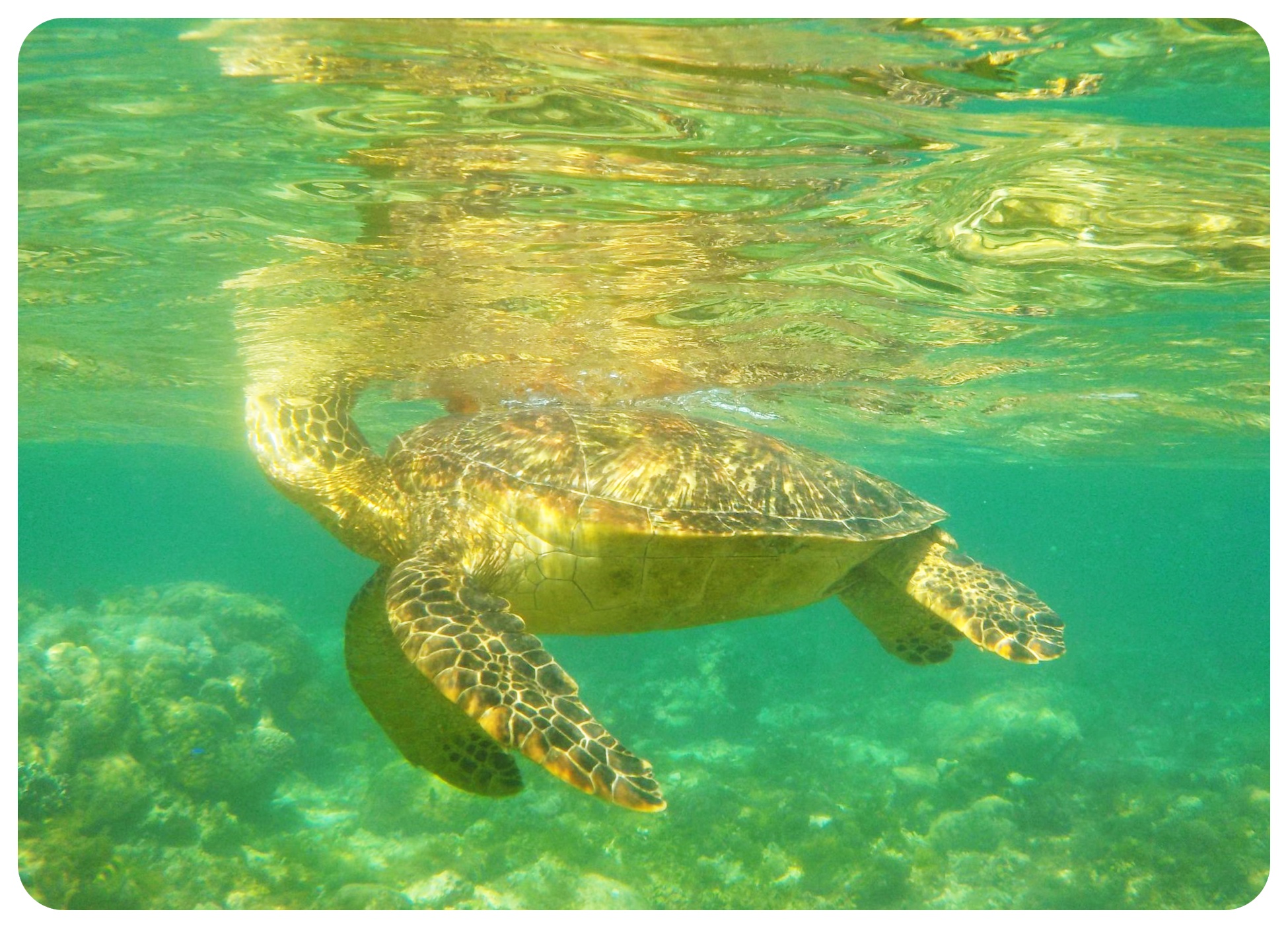 In this moment, I was also extremely happy that I had picked up the underwater camera at the very last minute – after regretting not having one when I was snorkeling in the Red Sea last year, I didn’t want to swim with whale sharks without being able to photograph it. Since I didn’t know how often I’d actually use it (I mean, how often do I really go snorkeling?) I didn’t invest in an expensive model but chose a Nikon Coolpix

to get the hang of it, and to be able to upgrade to a better model if I think I need to. 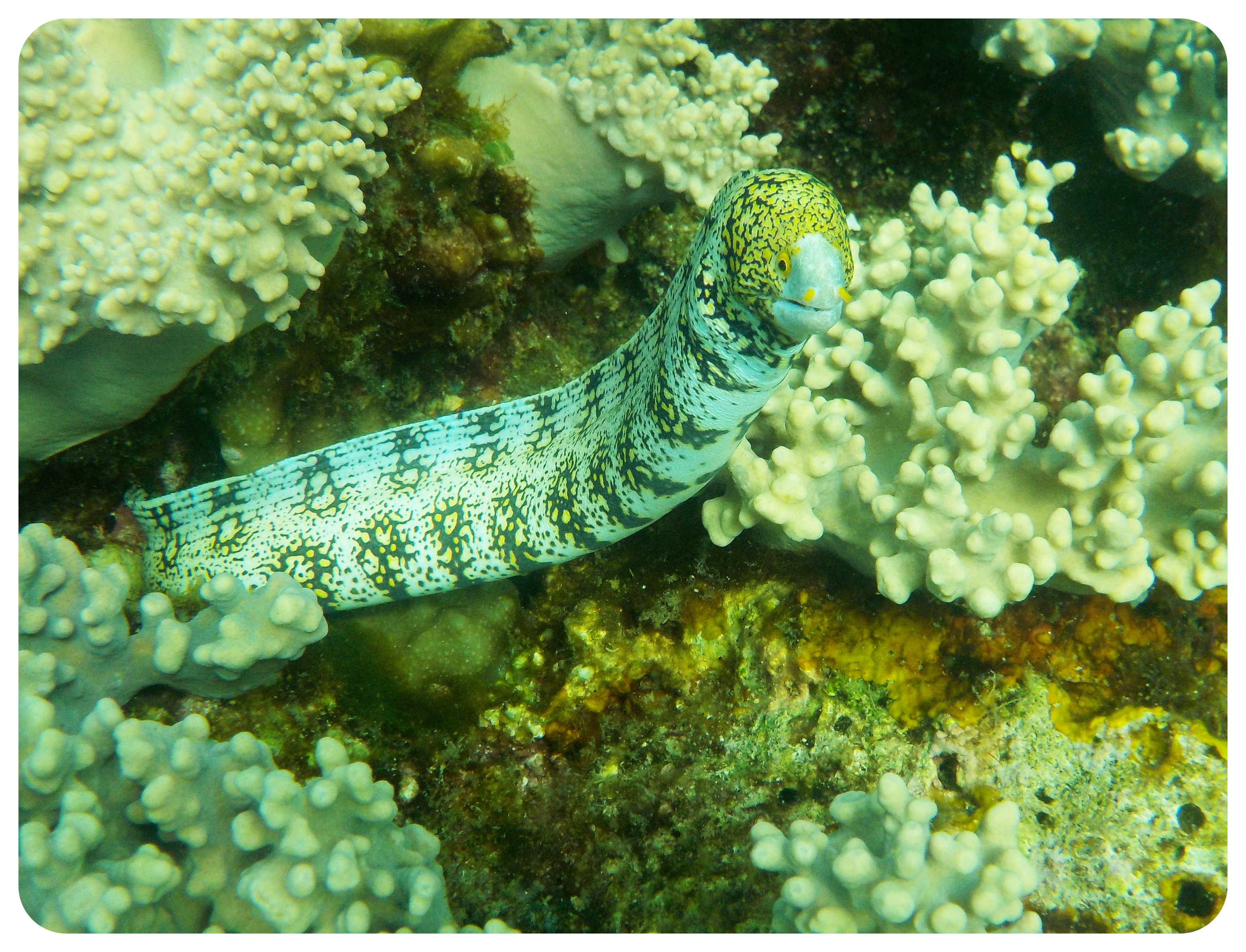 For a relatively inexpensive model I have to say that I am very pleased with the pictures it takes – what do you think? 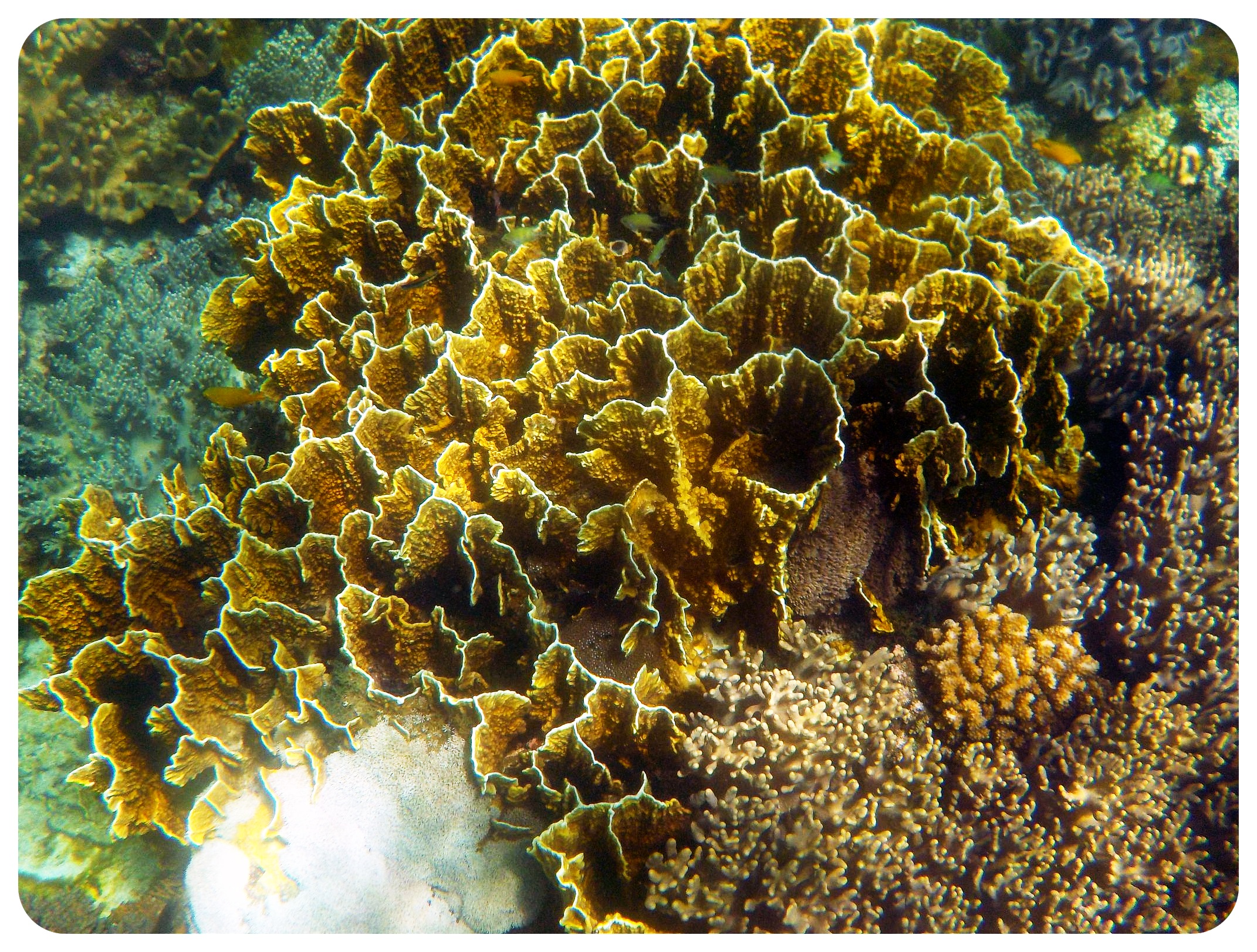 I was lucky enough to be the only snorkeler on the trip – the other two people went on dives while I snorkeled – and so I ended up having the guide all to myself. He basically just swam with me, pointed out cool stuff and fish that weren’t visible at first or hiding under coral, and I was able to take in the underwater world without having to worry I might get too far away from the boat. 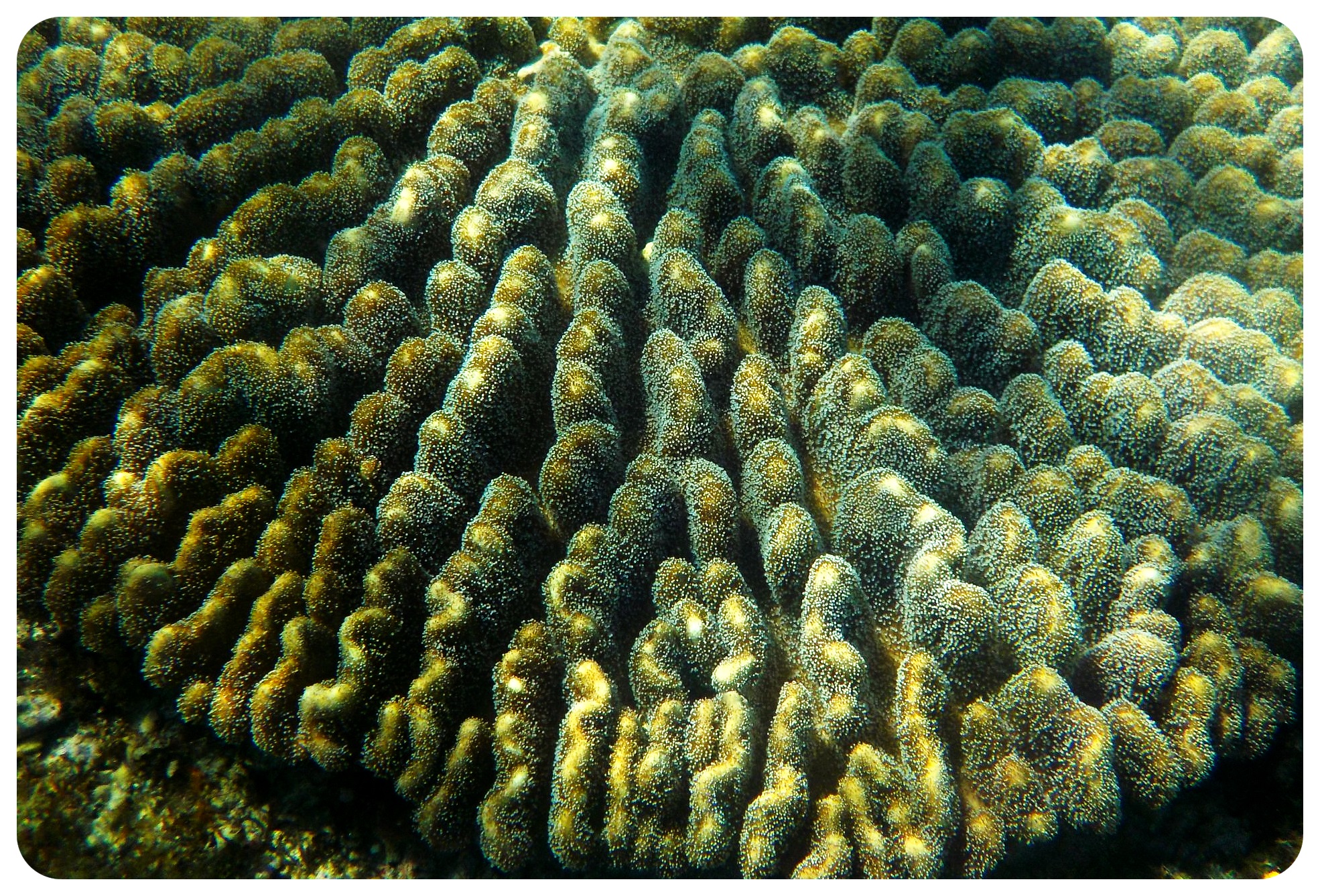 I am scared of diving, but I can’t get enough of gliding through the water and marveling at the coral formations, colorful fish and plants. There are over 650 species of fish and 400 different species of coral in the protected waters around Apo Island, which is why the island is such a popular dive spot – even included in the 100 best diving sites in the world. 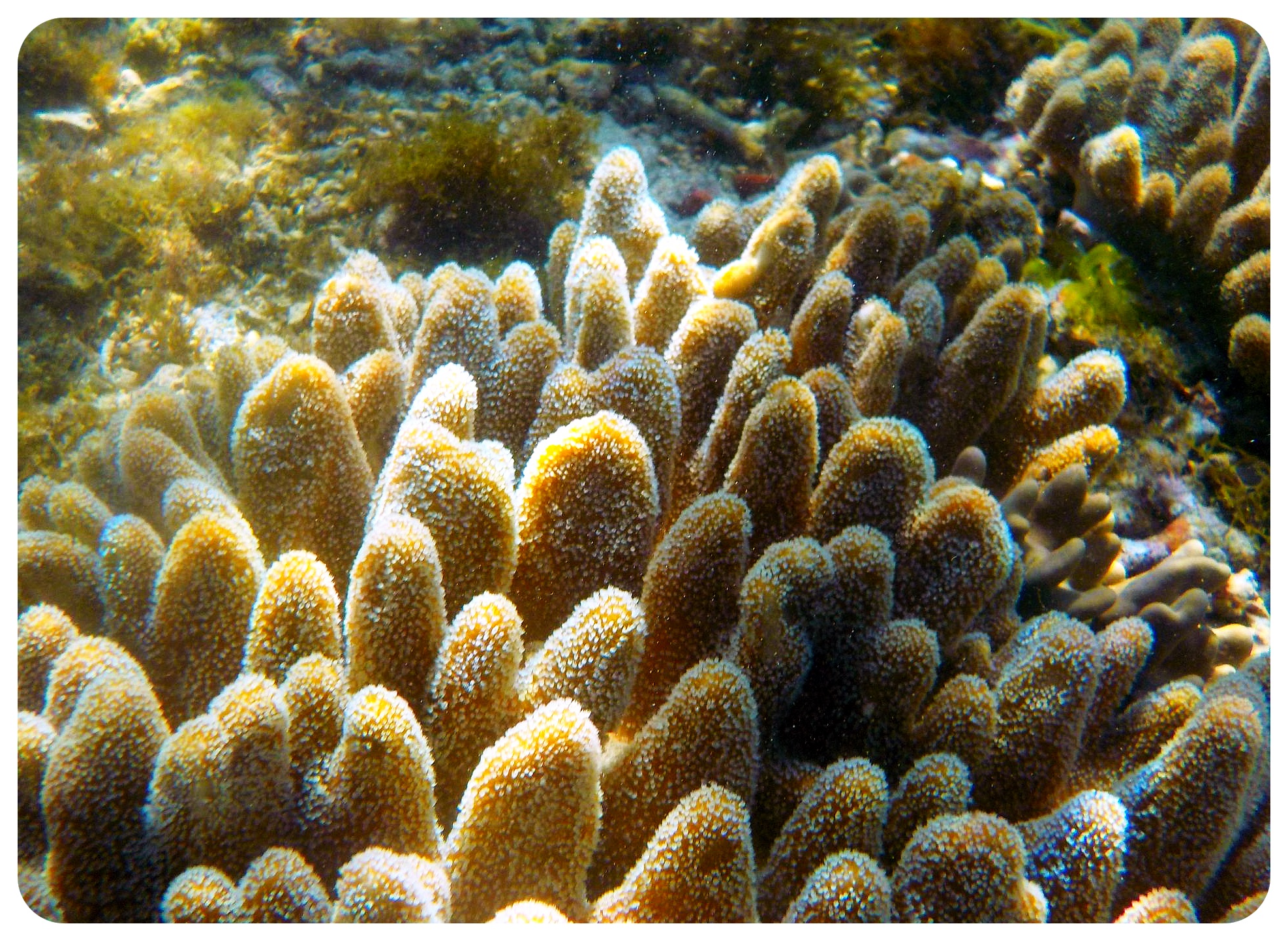 The marine life in our oceans with its reefs and underwater canyons and colorful oddly-shaped sponges and algae is just fascinating and I could spend hours swimming over the corals taking in unusual shapes and formations. 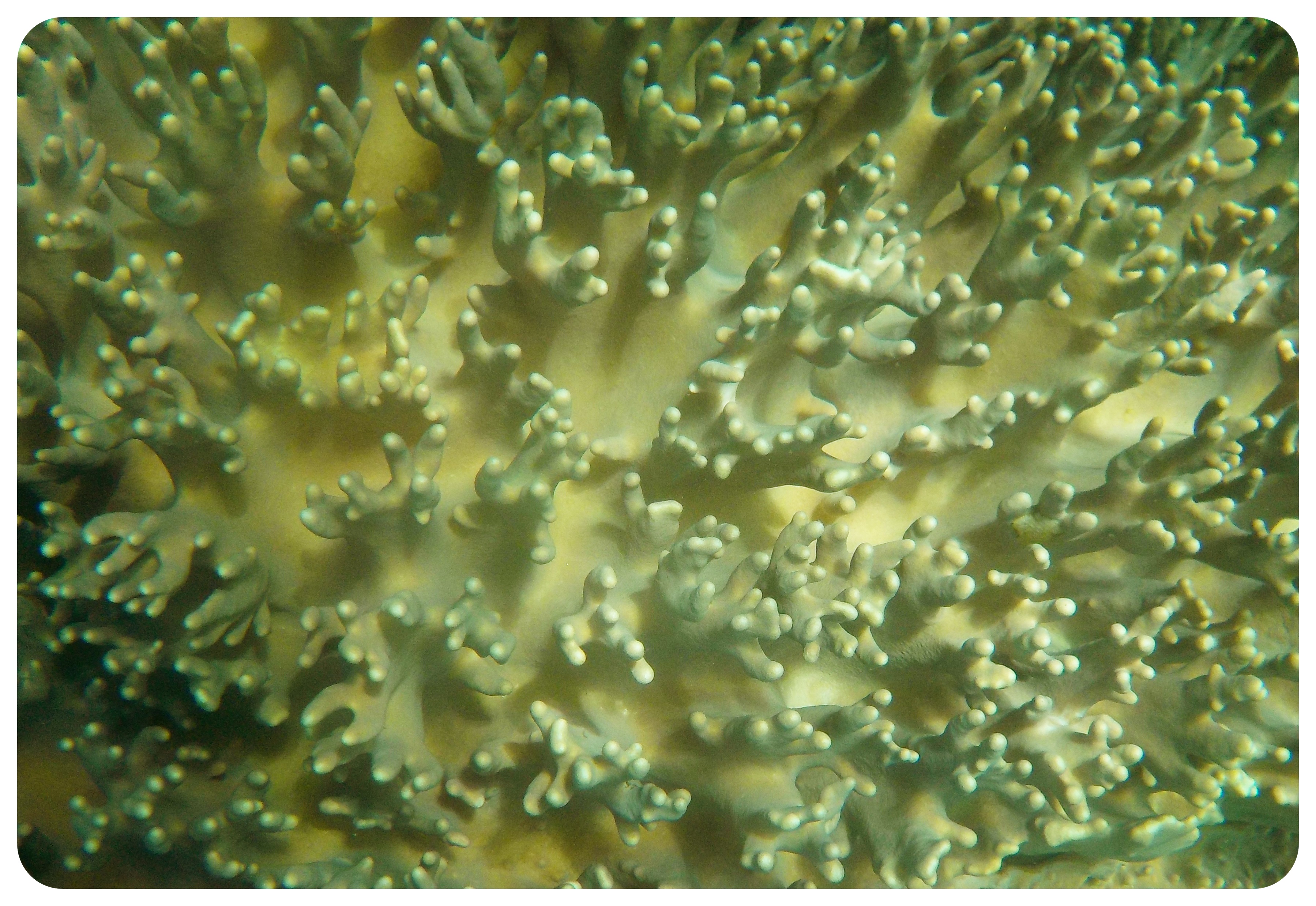 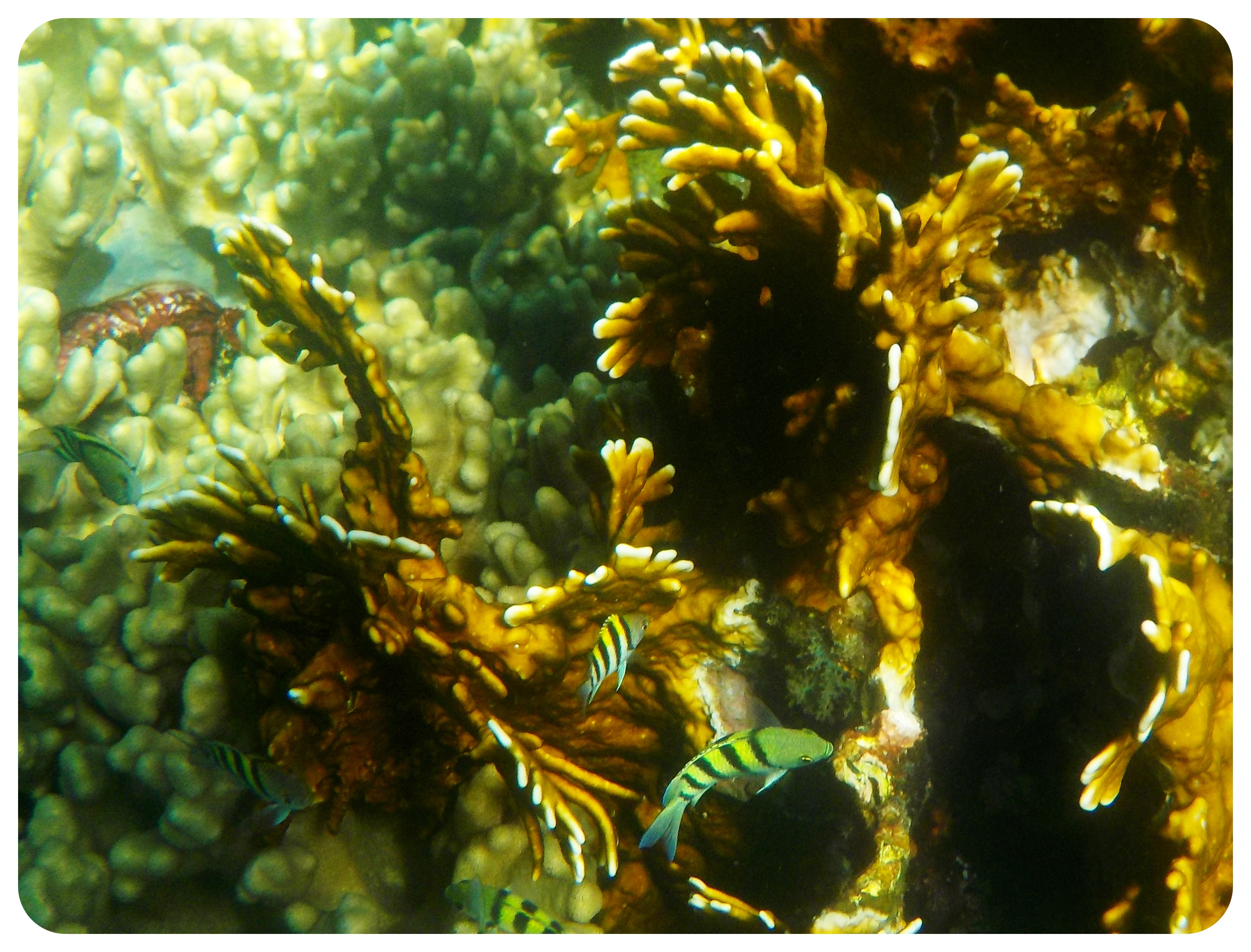 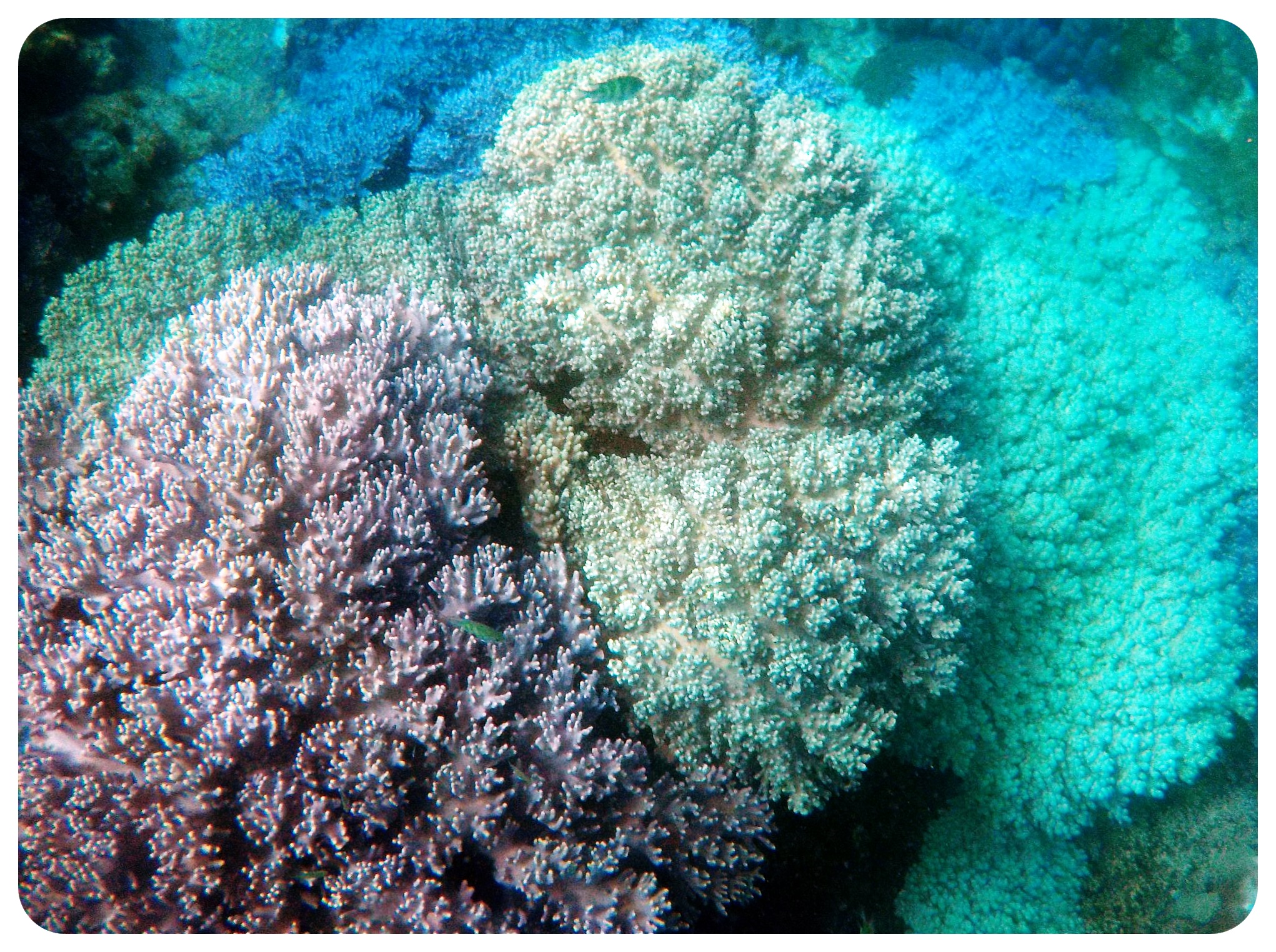 During our third and last snorkeling session, my guide showed me underwater volcanic rocks from which hundreds of little bubbles were emerging and slowly making their way to the surface. I had never seen a unique natural spectacle like this and was in awe as we swam through the bubbles and felt them touching my skin. 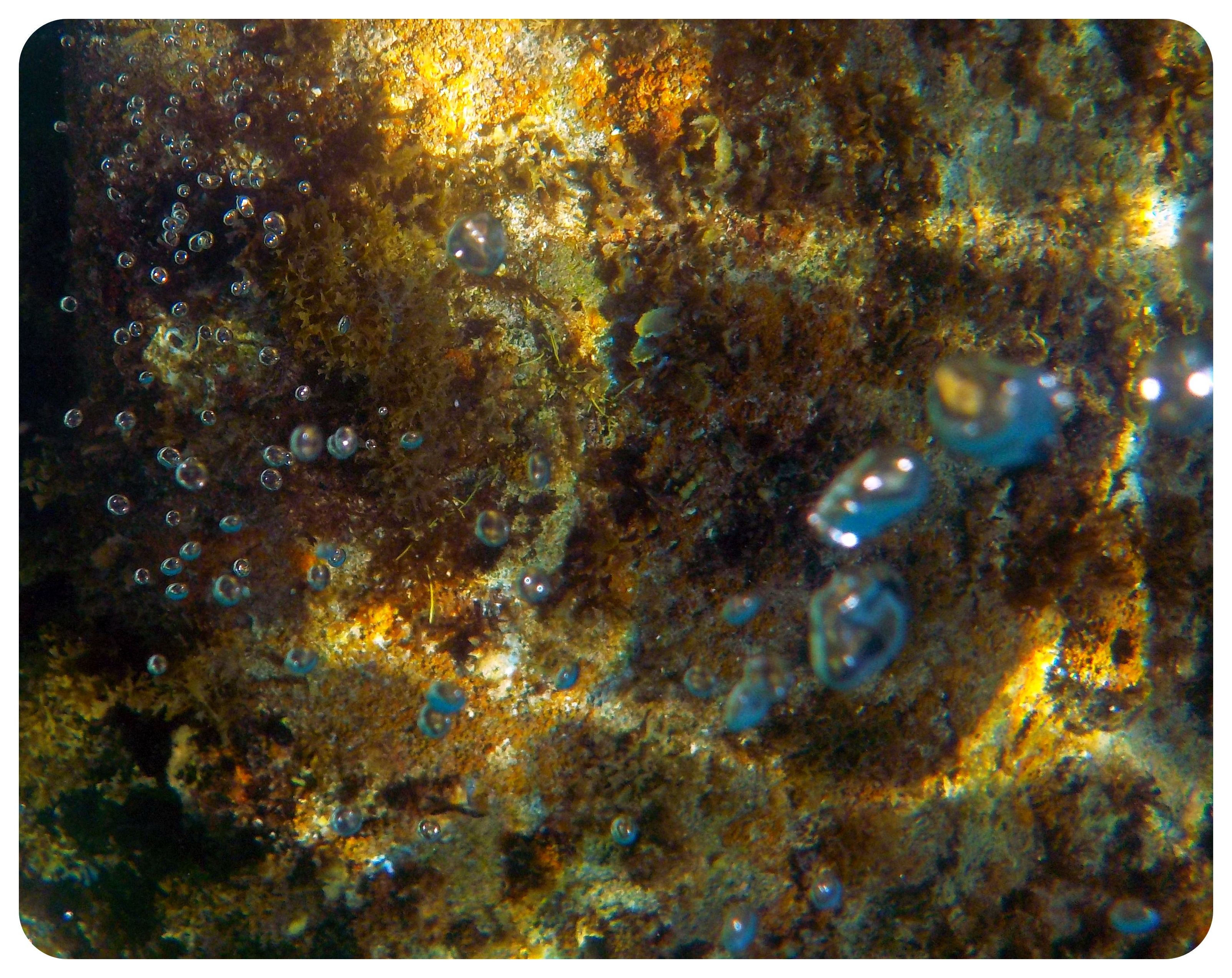 I was still mesmerized by the wonders of Apo Island’s marine life when I got back to Dumaguete later that night, almost tempted to extend my stay to do the exact same tour again the next day, but I had to catch a flight to my second to last stop in the Philippines: Palawan, the island that had just been crowned The World’s Most Beautiful Island by Conde Nast Traveler. 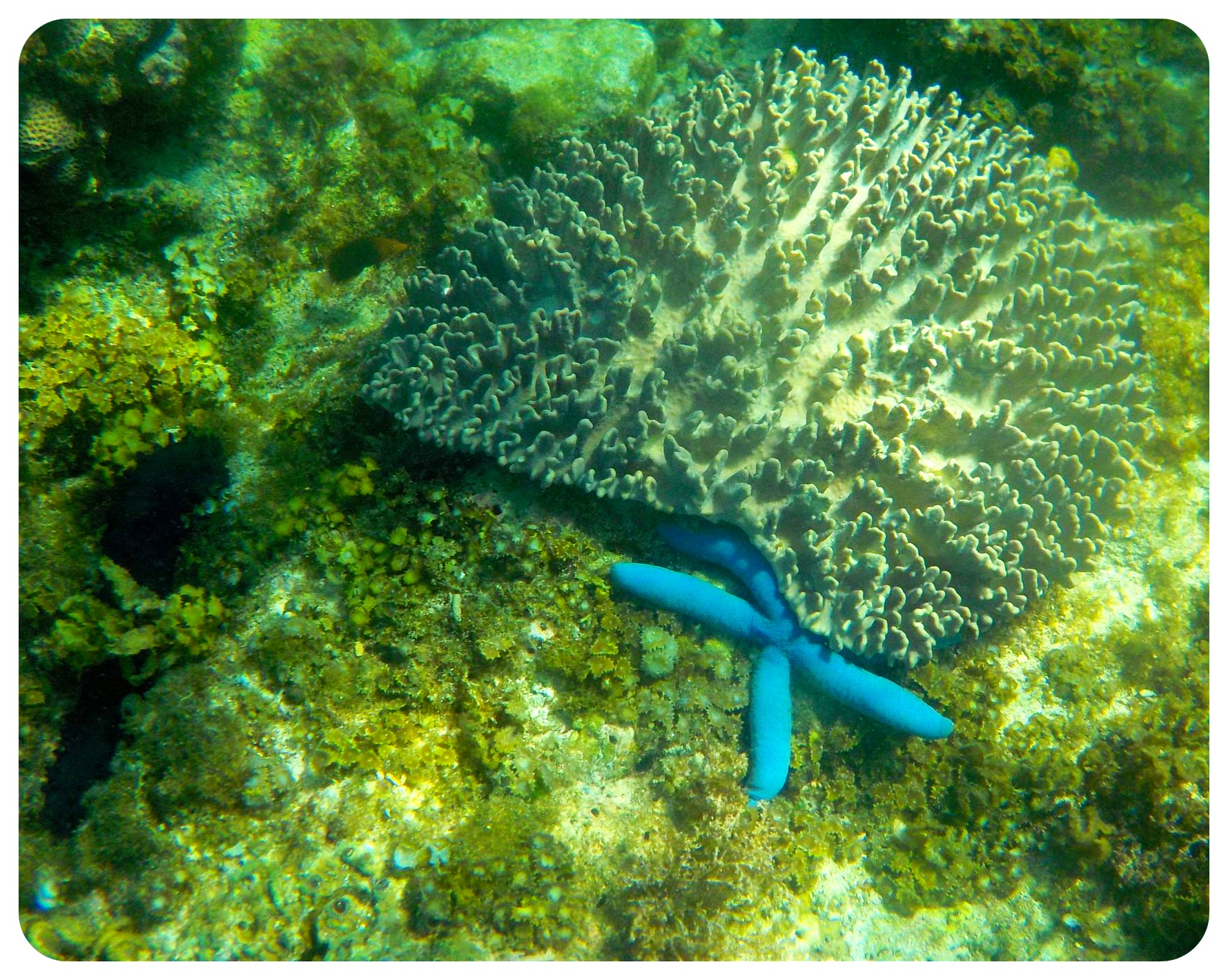 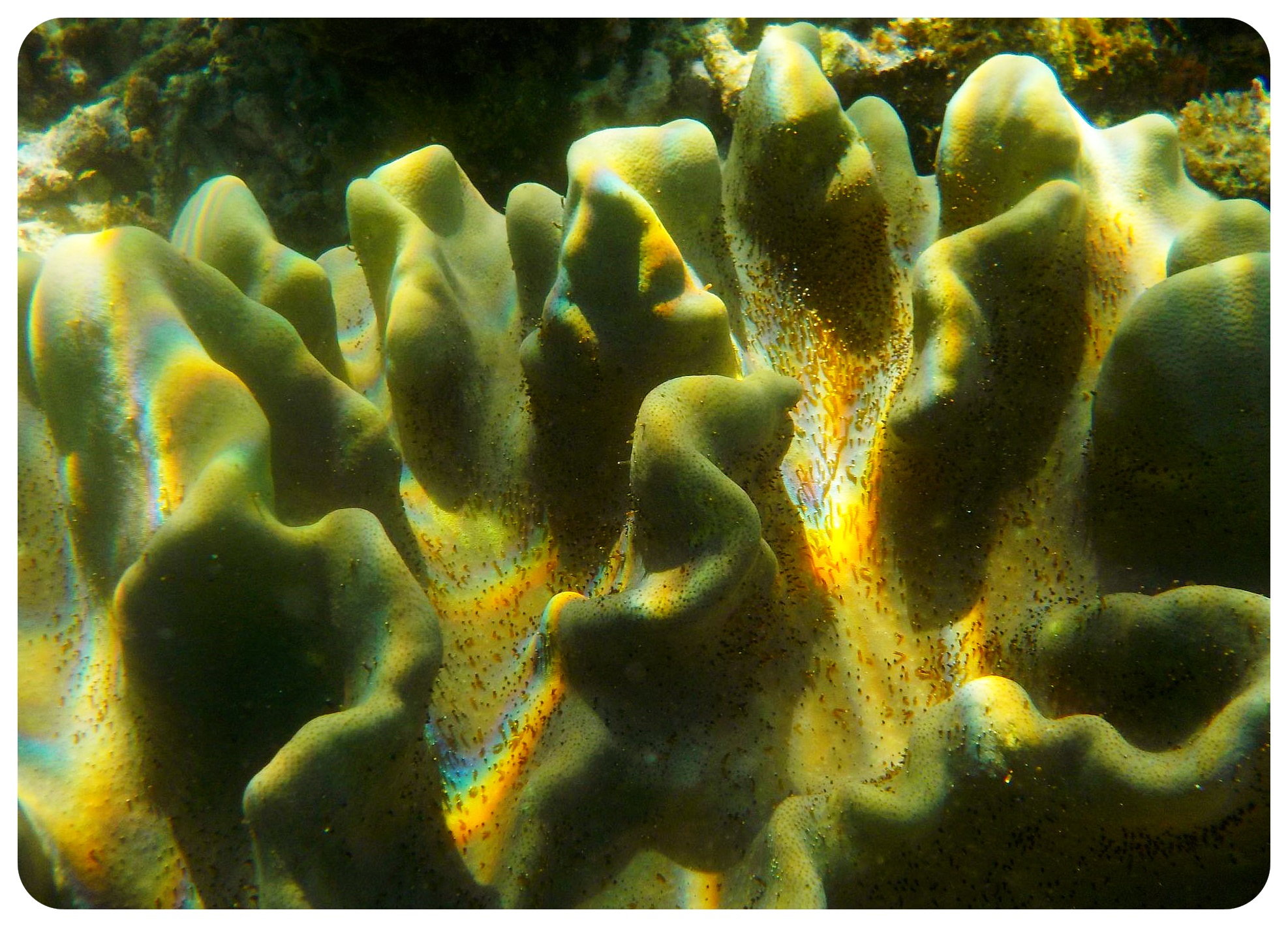 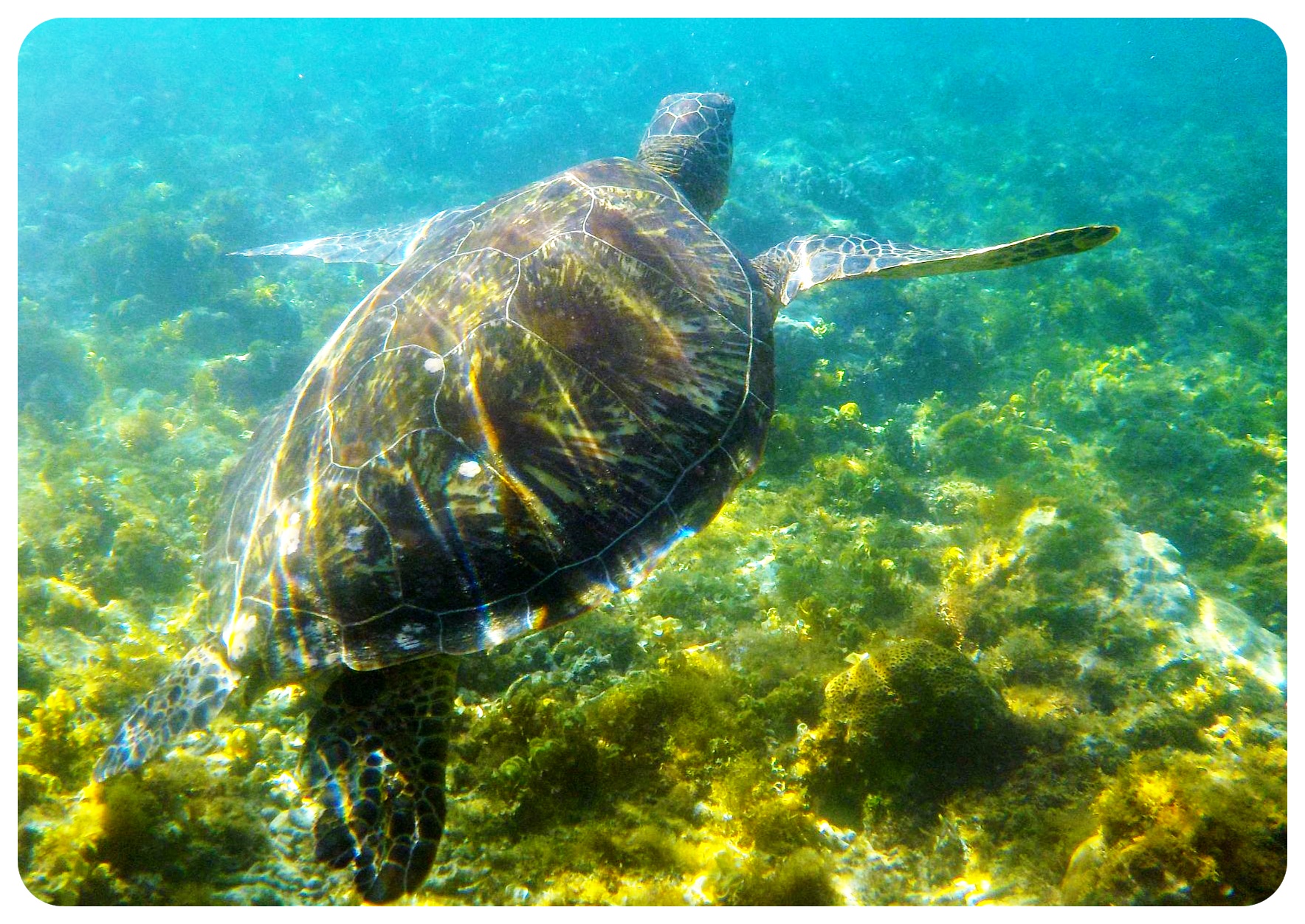 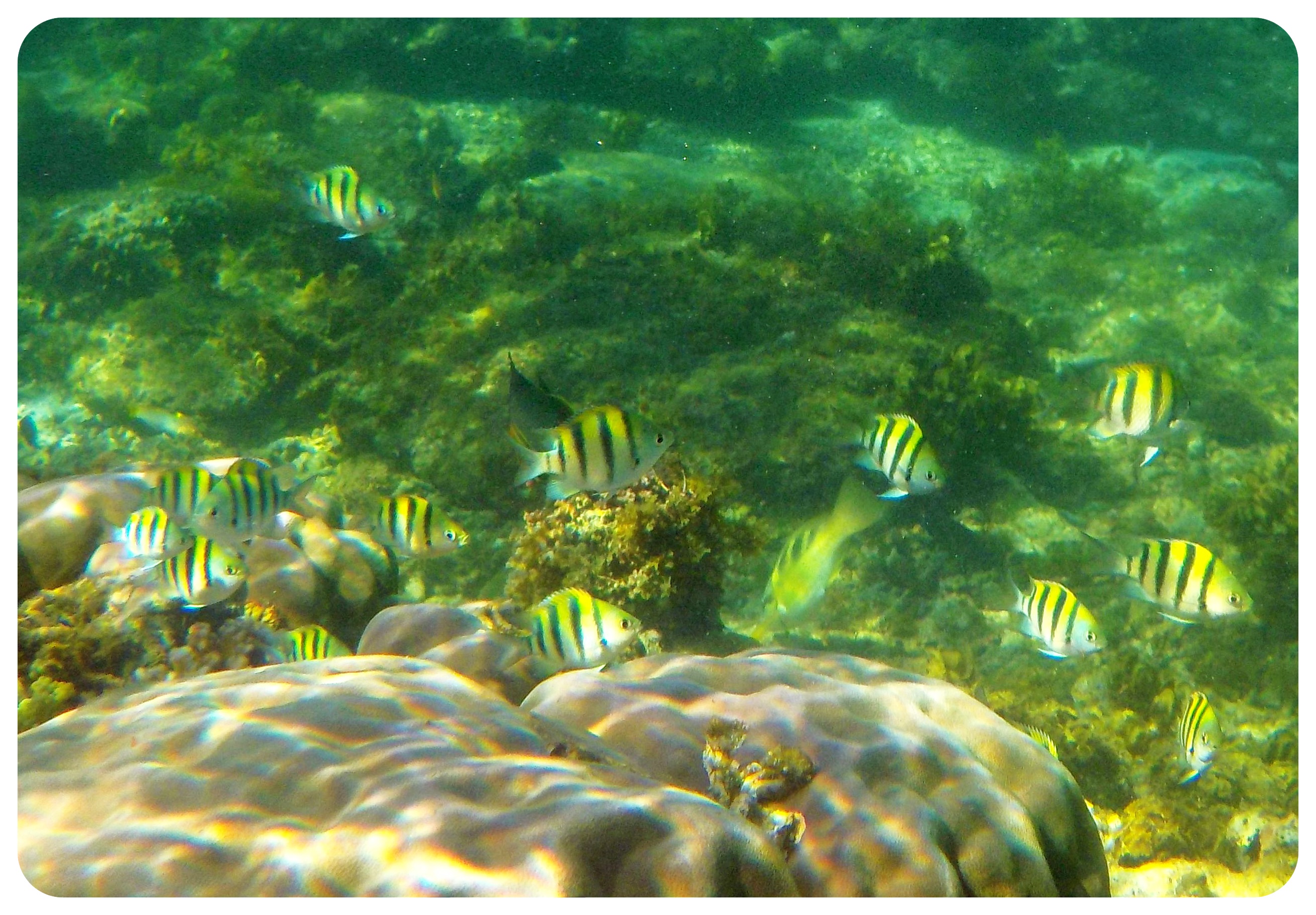 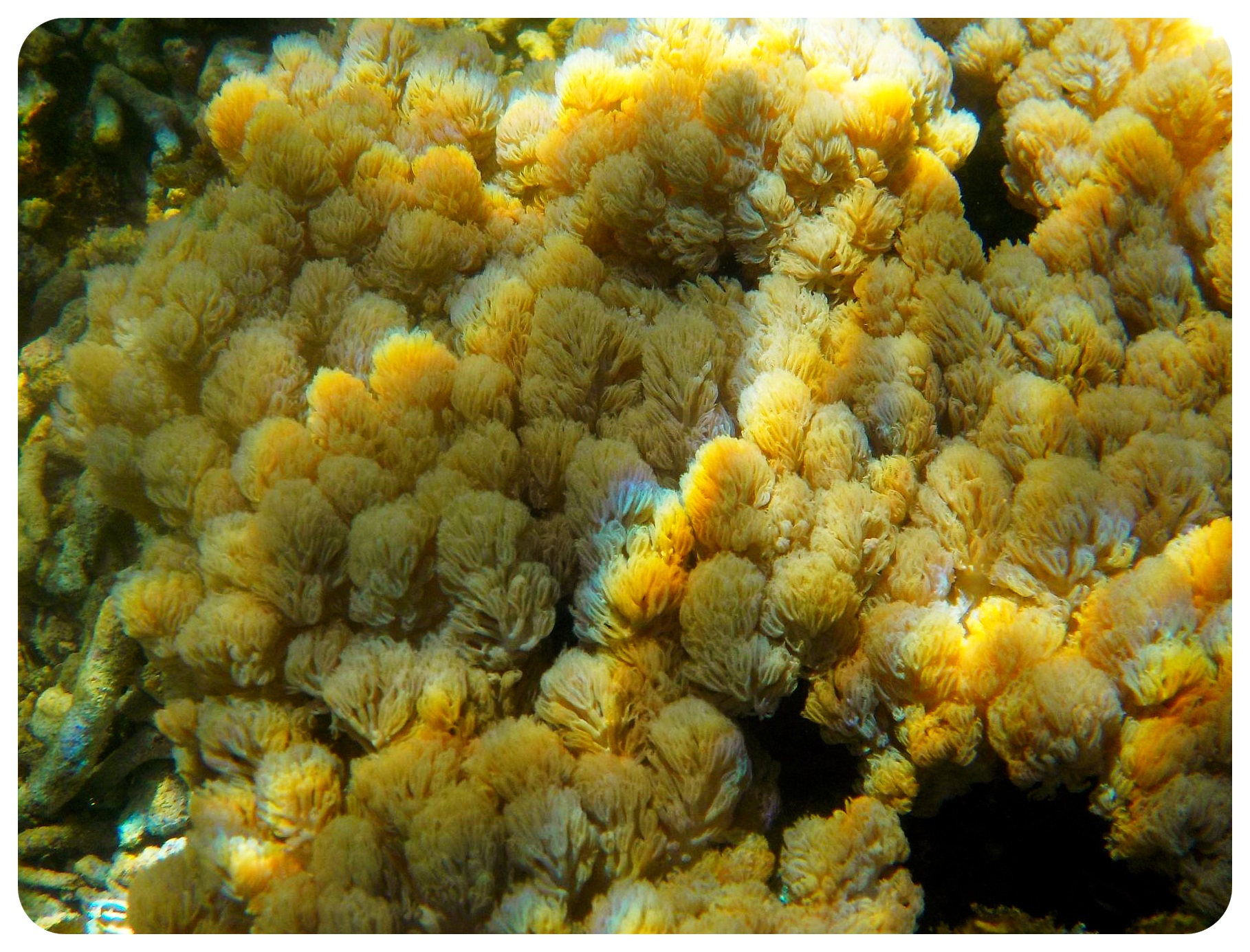 Sharks, swimming pigs, and iguanas: An Unforgettable Day Excursion in the Bahamas

Polaroid of the week: Koh Poda, my island paradise in Thailand
Click here to cancel reply.

[…] Read more: Swimming with turtles in the Philippines […]

[…] any sharks but a sea turtle (which would’ve compensated for not seeing a shark had I not just snorkeled with turtles in Apo Island, hence I was a bit disappointed), followed by a stop in another bay in the […]

‘You can swim with turtles there.’ That sentence was all I needed to hear in order to change my travel plans - I can totally relate! We we're originally planning to go to Kalanggaman Island but after research, we decided to go to Apo Island instead. It was so worth it and it was a very great experience swimming with endangered sea turtles. The coral garden is also breathtaking.