Even though I didn’t have many expectations when I visited Hong Kong for the first time this year, I have to admit that not only did the city blow me away completely, but it also surprised me in many ways. I noticed these things during my first visit earlier this year, and when I returned to Hong Kong last month, I wanted to see if I still felt about them the same way, especially #8, which I found mind-boggling! And yes, I was still just as surprised about the following Hong Kong facts as I had been back in January – so here they are, twelve things that surprised me about Hong Kong: 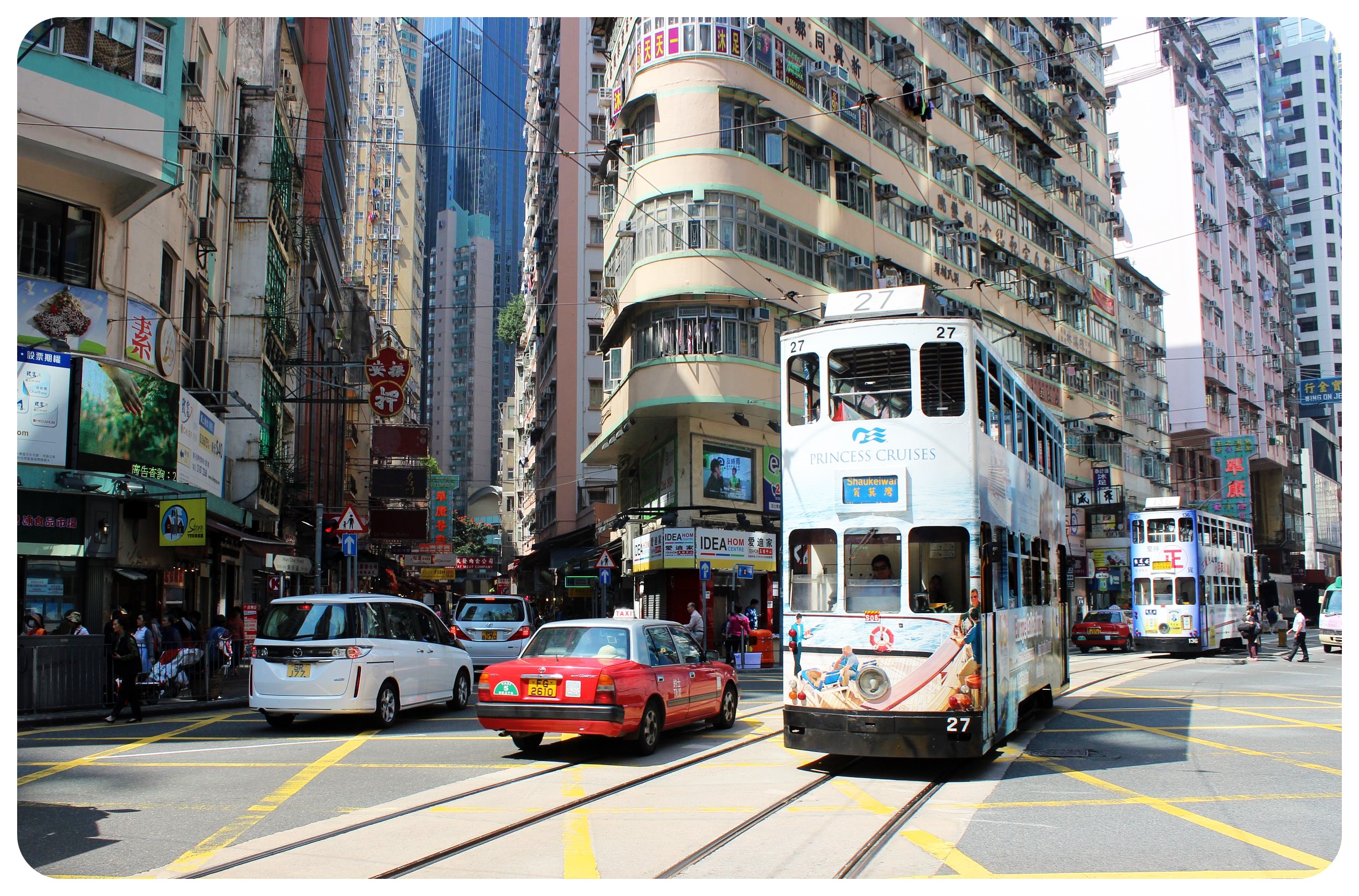 Arriving in Hong Kong from Stockholm, which had felt eerily empty during my visit, was absolutely overwhelming. There were crowds everywhere, and I hadn’t experienced large numbers of people in this way since leaving New York last November. Especially in the Kowloon neighborhood, where I was staying in the beginning, the streets were always packed with people. The subway was just as busy as the tube in London at rush hour, and most streets felt as busy as the streets around Times Square in Manhattan. It took me a few days to get used to how crowded Hong Kong felt. 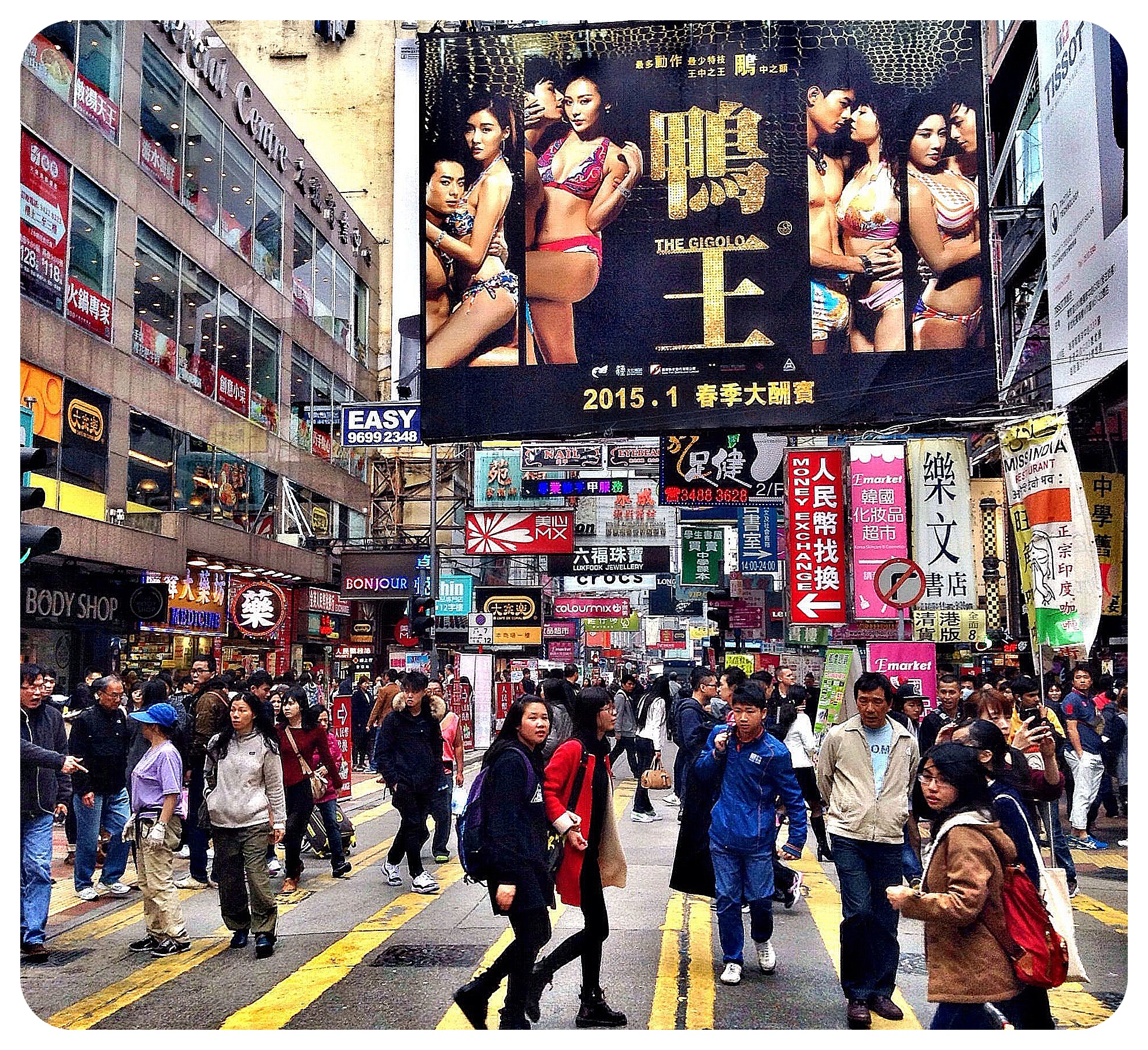 I have to admit that I had no idea that Hong Kong was that hilly! There aren’t a lot of hills in Kowloon, the part of the city that is connected to mainland China, but on Hong Kong Island, I found myself huffing and puffing up and down steep hills constantly. That’s why on Hong Kong Island, you find the world’s longest covered outdoor escalator, the Central–Mid-Levels escalator, which transports more than 55,000 people every day from the lower Central neighborhood to the mid-levels. The escalator has a vertical climb of 443ft (135 meters) and is 2,600 feet (800 meters) long. Since the financial district of Hong Kong is located in Central (at the bottom of the mountain), the escalators and walkways move downwards in the morning to transport workers from the higher located condominium buildings to their offices. After the morning rush hour, the escalators move upwards.

Considering how modern and developed Hong Kong is, it struck me as surprising that all the scaffolding I saw around town was made from bamboo. I hope the skyscrapers were built with more sturdy scaffolding.. but bamboo seems to be much more robust than I thought – who knew! This was probably the most surprising Hong Kong fact for me.

Who knew Hong Kong was so hip? Especially the Poho neighborhood (short for Po Hing Fong, in the Sheung Wan District), filled with trendy boutiques, independent coffee shops, hip restaurants and chic bars seemed to be the favored hangout for Hong Kong’s 20something trendy professionals. Street art was ubiquitous here, and young entrepreneurs keep moving into the neighborhood, opening artisan bread shops and organic bistros and other businesses. 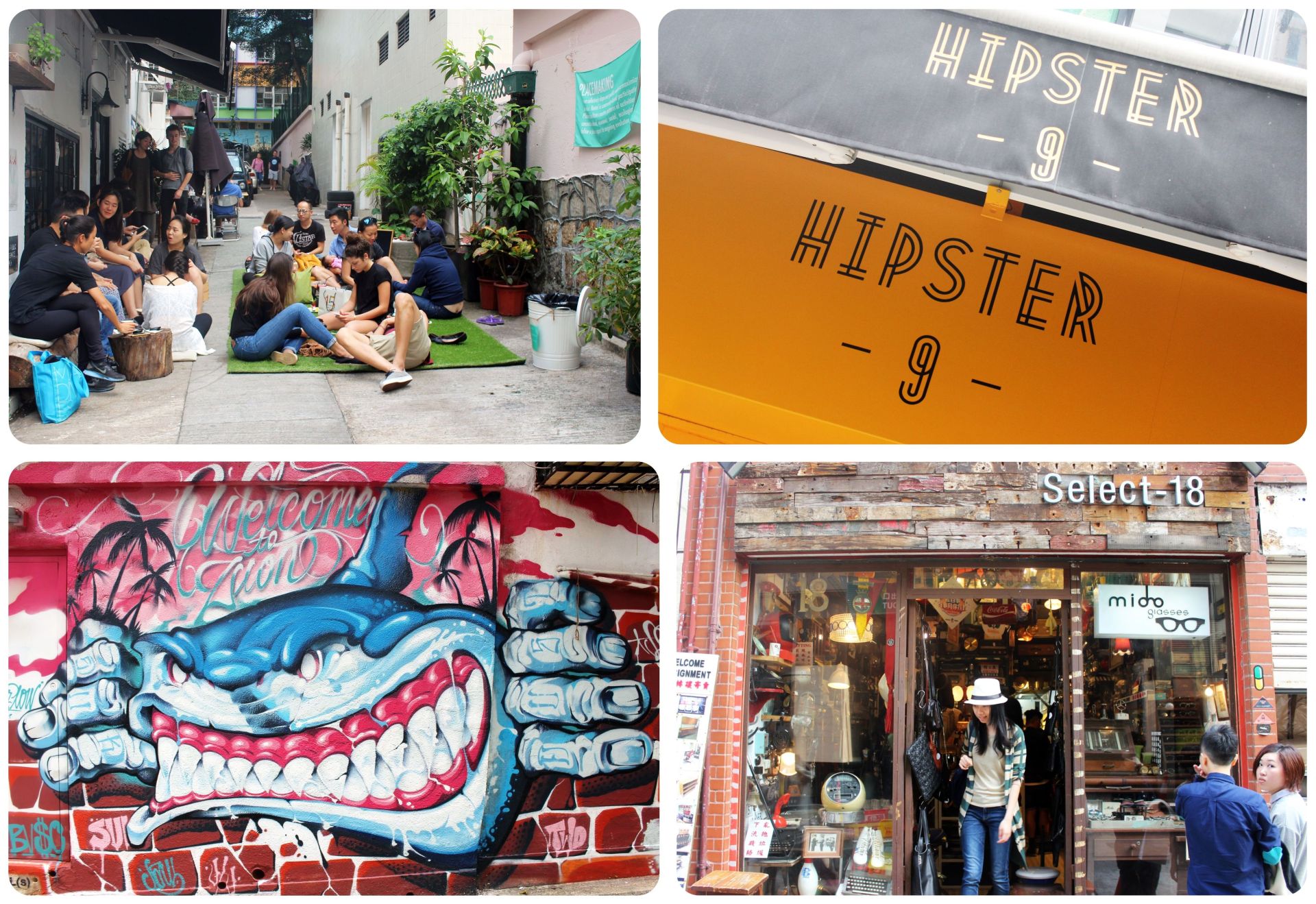 I was surprised to see so many different nationalities in Hong Kong – not only Westerners, but also a lot of other Asian nationalities and Indians. When I was walking through the Financial District on a business day, I usually encountered more Westerners in suits than Asians!

I know that Beijing and other Chinese mega cities are notorious for their air pollution, but I didn’t know that Hong Kong was just as polluted. The skyline pictures I had seen prior to my trip, taken from the famous ‘Peak’ viewpoint high over Hong Kong, usually made the city look like it had clear skies. During both my visits, however, the air was polluted and the city was constantly covered in a cloud of smog. I later read that air pollution has become a serious problem in the past 20 years and the number of asthma and bronchial illnesses has soared considerably. 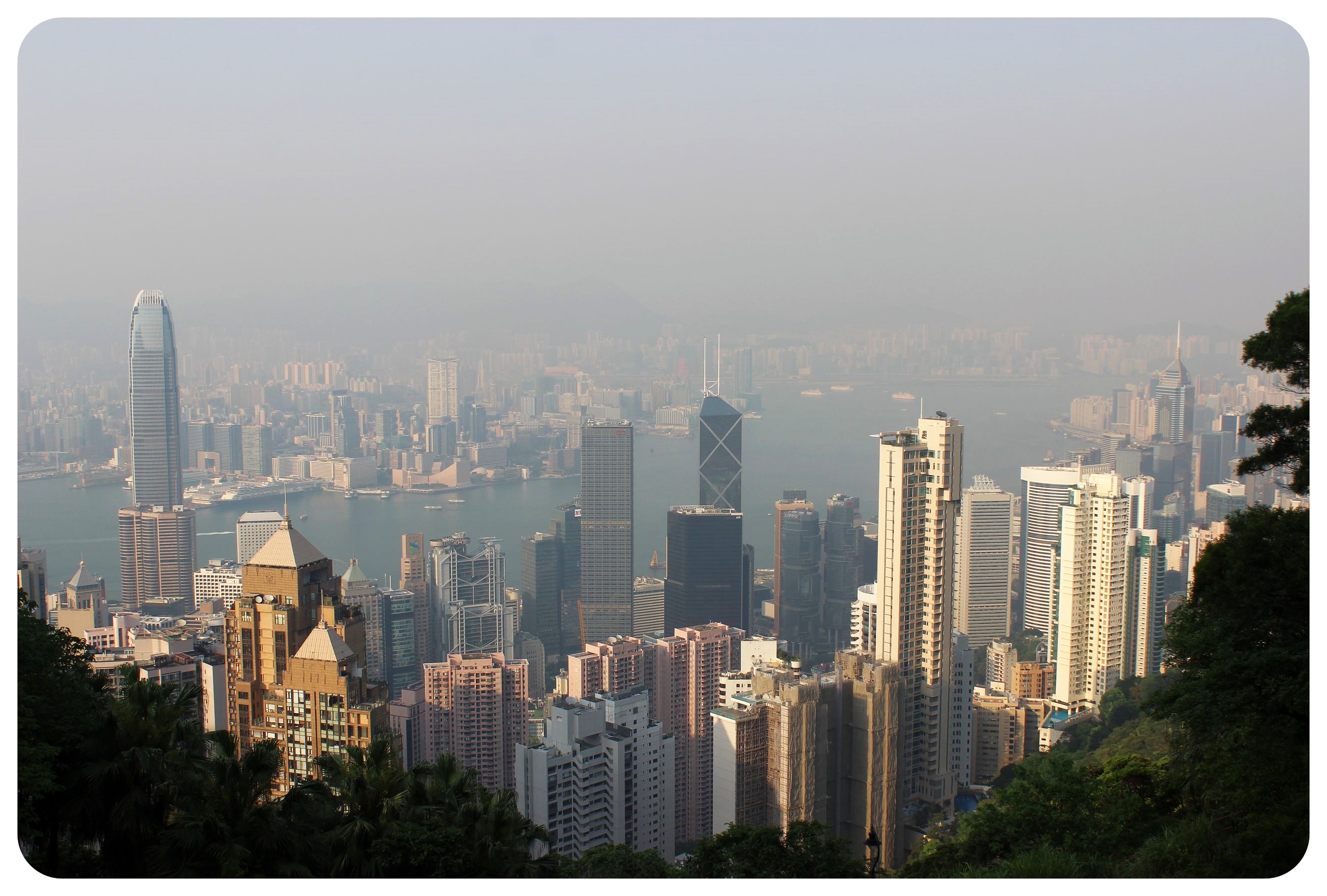 While the air might be polluted, Hong Kong is still home to an amazing amount of green spaces. Trees are everywhere, the city is infused with little parks and within minutes you can get to a green space to go on a wilderness hike. I was amazed to see how green the city was when I hiked up to the top of Victoria Peak through a number of parks, and when I ran along the Bowen Road Fitness Trail high above Wan Chai, the woods gave me an idea of the jungle this island used to be covered with, before it was changed for a massive concrete jungle. For me as someone who loves the outdoors, this was one of the most awesome Hong Kong facts I discovered during my visit. 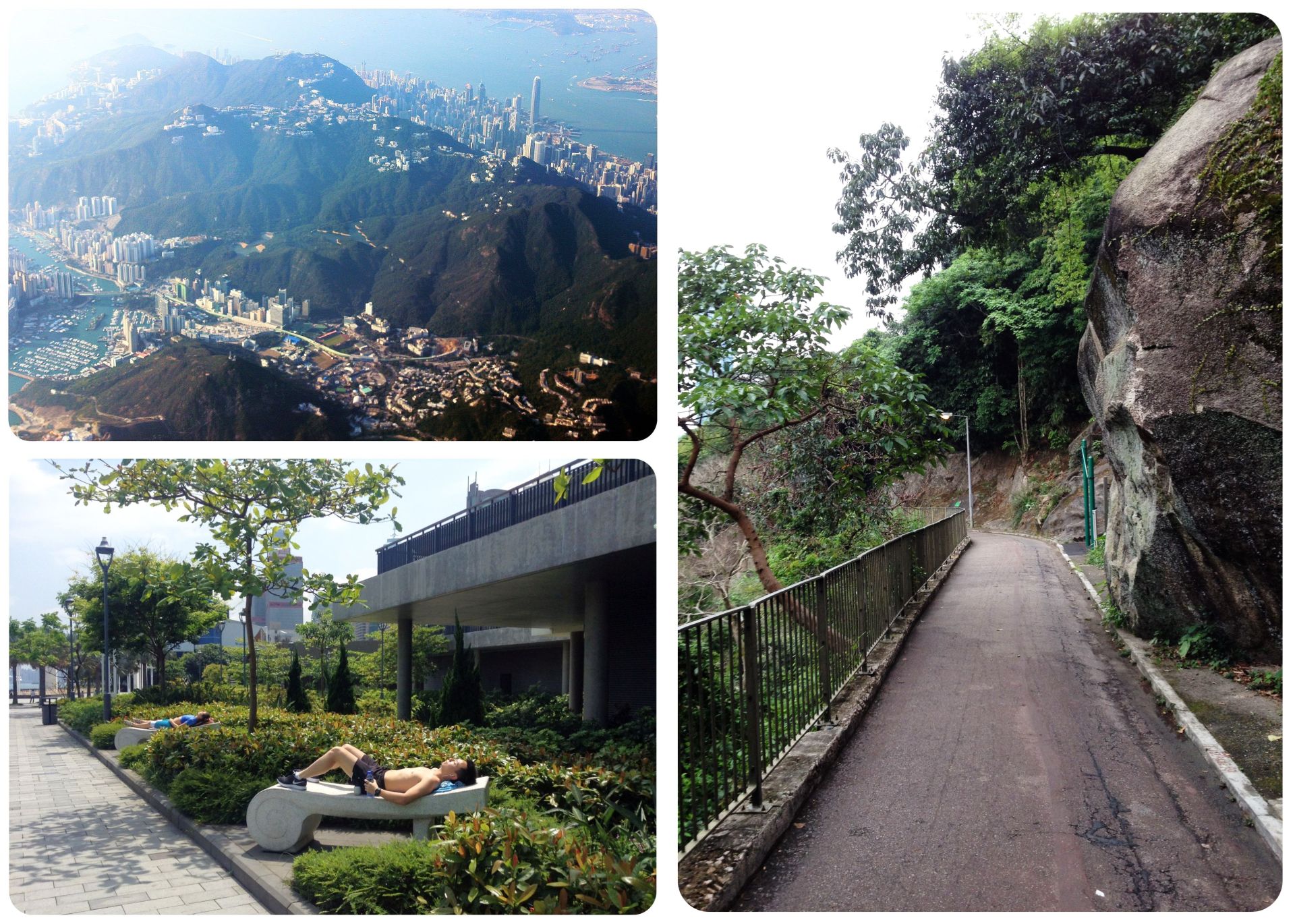 8 There are no bicycles in Hong Kong

Considering that Beijing supposedly has 9 million bicycles, it was an astonishing surprise to not see any bikes in Hong Kong. I had even seen cyclists in the crazy traffic of Bangkok – only a few, but still – there surely must be cyclists in Hong Kong?! I paid more attention to it on my second visit, convinced that I must have overlooked the bikes the first time around, but still: no bicycles! I was ecstatic when I finally spotted a bike in Wan Chai, but I didn’t see any cyclists anywhere, neither in Kowloon nor in Hong Kong Island.

(Note: I am sure there are bicycles somewhere in Hong Kong, but I just haven’t come across them, which is why I included it here. Please don’t take it too literally 😉 ).

9 A city of coffee lovers

A pleasant surprise, and one of the Hong Kong facts that nobody’s ever talking about! Having heard from travelers that it is hard to find good coffee in China, known as a tea nation, I wasn’t expecting much on the coffee front in Hong Kong.. only to find more specialty coffee shops, coffee roasters and coffeehouses than I could possibly try during my stay. I was ecstatic about the amount of excellent coffee shops in Hong Kong and will share all my favorite places for a caffeine fix in my next post. 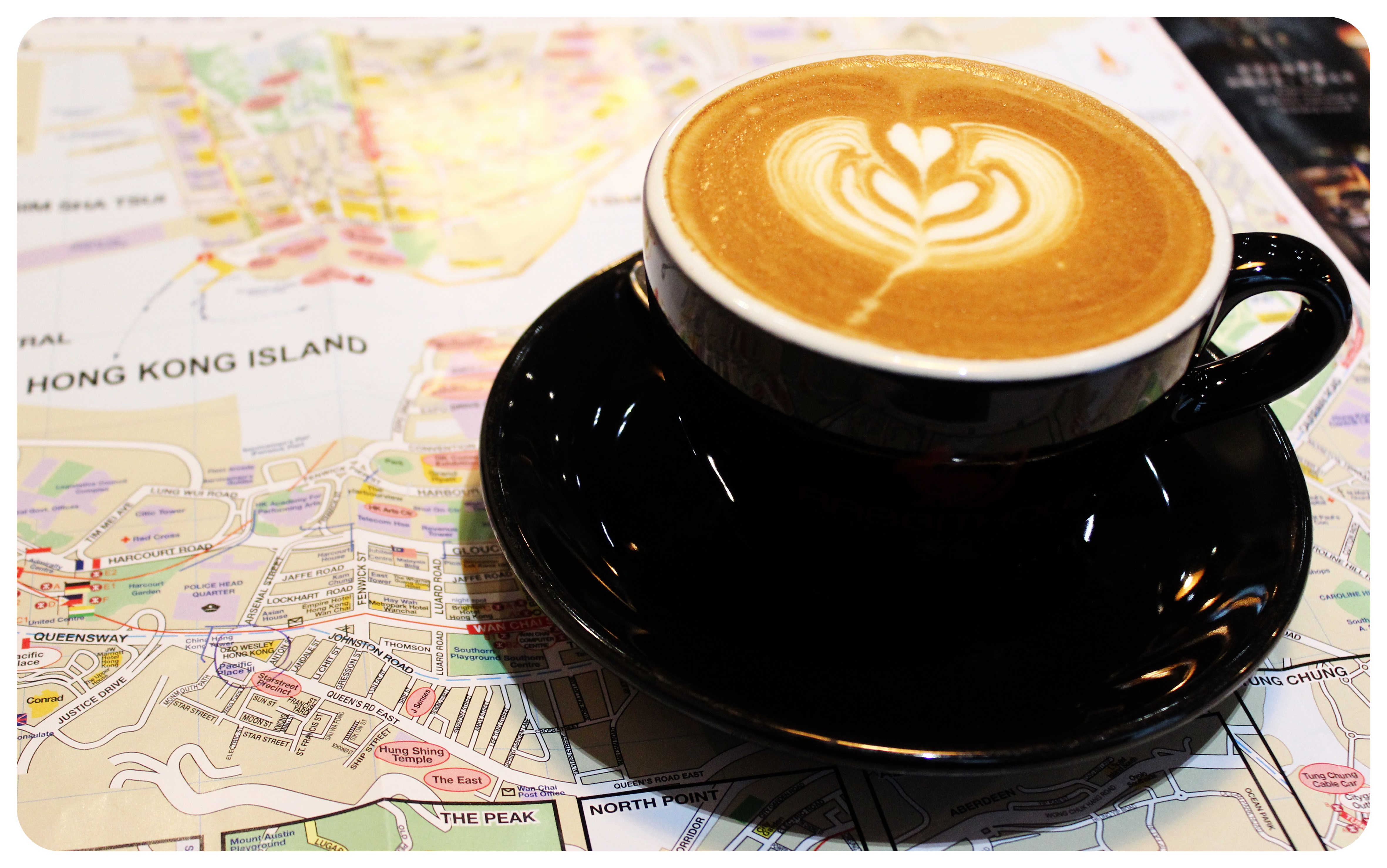 The first time I visited I came from Sweden, a pretty expensive country by European standards – and Hong Kong still felt more expensive. The second time I came from Thailand, where everything is cheap, and Hong Kong felt shockingly expensive in comparison then. Hong Kong didn’t just feel expensive to me though – it was pricey even compared to New York. I have yet to visit another place in the world where I pay more than $6 for a Flat White (coffee), and the price of a pizza at Pizza Express was £13.53 – the exact same pizza in a London Pizza Express is £12.50. Motorino’s charges $17.80 for a Margherita Pizza in Hong Kong, while it charges $15 for the very same pizza in Manhattan. Alcohol was pricey too, with a glass of wine or a beer usually starting at around $9. Hotels and hostels are also very expensive, as are clothes – the only thing that is surprisingly (and disproportionally) cheap is public transportation, with tram rides costing $0.30 and subway rides averaging between $0.64 and $1.55, depending how far you go. This was a Hong Kong fact that really surprised me.

11 The culinary scene is incredibly varied

This probably goes along with #5, how international Hong Kong felt: the food scene was much more varied than I thought. In some parts of the city I came across more international restaurants than traditional Chinese eateries. French bakeries, American-style brunch places, British chain restaurants like Pizza Express but also an outlet of New York specialty pizza joint Motorino’s, Italian pasta places and bagel cafes – in Hong Kong, you can find it all. For someone like me who isn’t the greatest fan of Chinese food, Hong Kong’s varied food scene was heavenly. 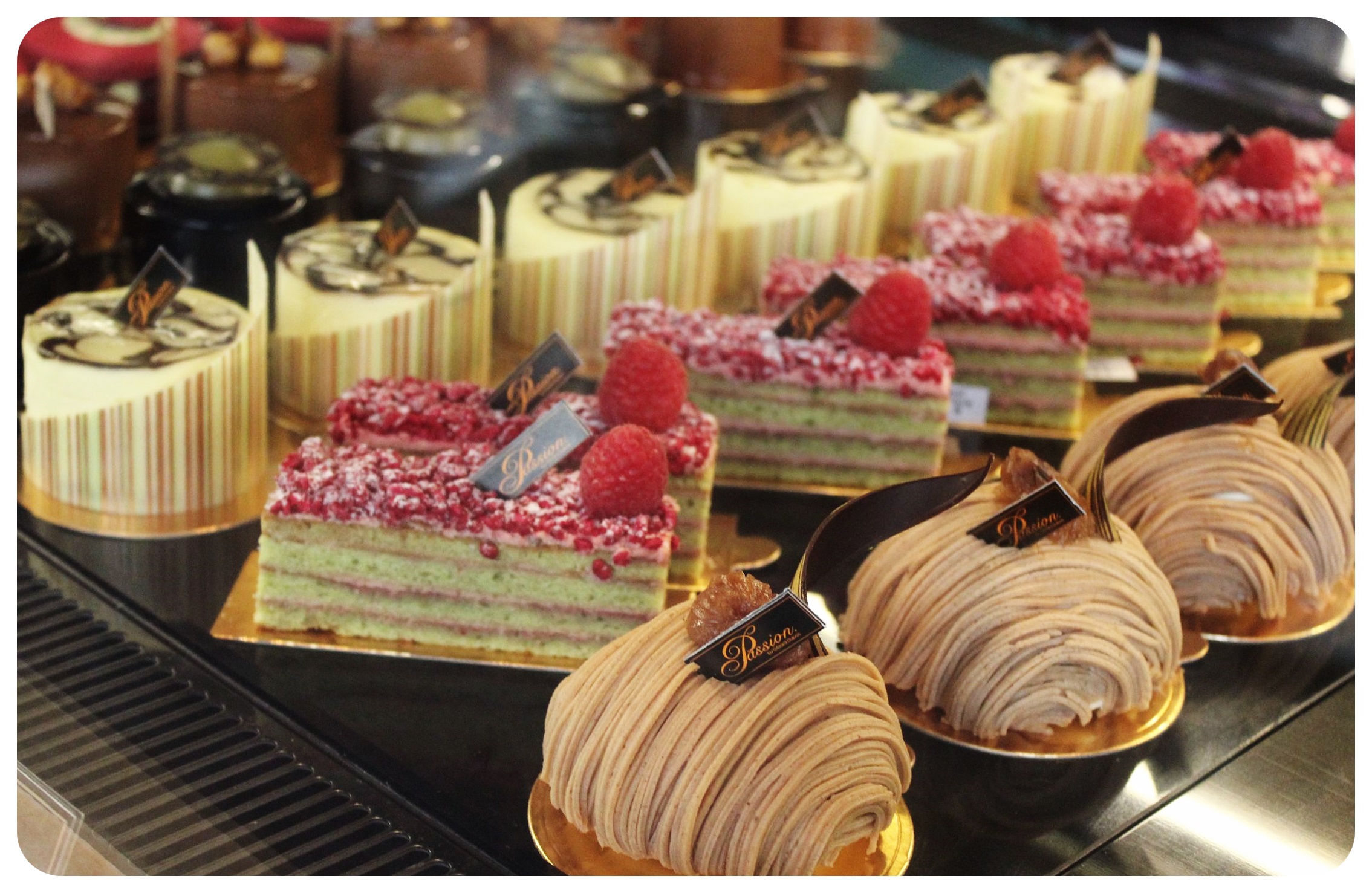 I understand now why Hong Kong sees such an influx of visitors from mainland China: the internet is super fast, and there aren’t any websites blocked, unlike in China, where you can’t access sites like Google, Facebook or Twitter. Hong Kong also offers free wi-fi in many public spaces and parks, and almost all restaurants and coffee shops offer free wi-fi. After having been dogged by bad luck with well-working wi-fi in Thailand, it felt amazing to be connected at all times again, and to be able to even stream movies!

Have you been to Hong Kong? What are the things that surprised you? Or do you have any fun Hong Kong facts you can add to my list? 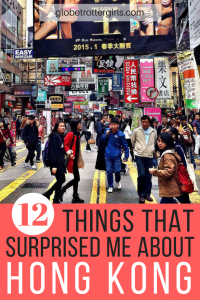