Today we celebrate not only 800 days of life as traveling nomads, but 2,190 days of being together. That’s right, today is also our 6-year anniversary – two incredible reasons to celebrate today!

If I had to choose one word to describe the last 100 days, it would be contrasting. More than in any of our other 100 days reflections, our experiences have truly been all over the map, both literally and figuratively.

From the gentle subtleties of Asia to the in-your-face intensity of colorful India on to the sandy vastness of the desolate Tucson desert and finally ending up here, in a gorgeous house of our own for two months on a remote beach in southern Mexico.

Let’s start with the end. In the last 100 days, we ended our first stint in South East Asia. When we first bought our tickets to Bangkok, we were wide-eyed and filled with wonder. What would Asia be like? We had read blogs and our Lonely Planet Southeast Asia

book. After seven months there, we felt as travel-savvy there as anywhere else.

Picking up where we left off at Day 700, we were in Sihanoukville, Cambodia’s most popular beach town, at our favorite spot in town – the Beach Club resort. A three-day trip over to the entirely underdeveloped island of Koh Rong made us realize just how spoiled we are after spending so long around the Caribbean the year before. We undertook a tough hour-long hike up and over a mountain, through the jungle of Koh Rong to reach what has been the only stretch of beach to impress us to the same degree the Caribbean did on a daily basis. India’s beaches were no better, either.  It may have taken 800 days, but we are now fairly certain that we prefer the Caribbean to any beaches world – until we get to the Maldives, that is! 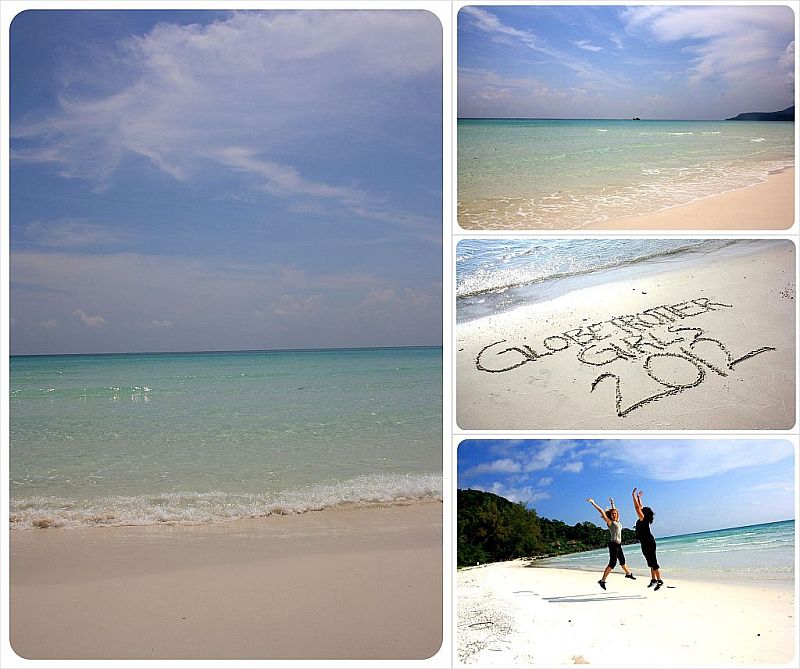 On the whole, however, Cambodia turned out to be our favorite South East Asian country, maybe because the challenges of traveling made us actually feel like we were on the road whereas Thailand and Malaysia are such a breeze to travel. Maybe it was getting so involved in the horrid history…but most likely it was the Cambodian character, the friendliness of the people. We just couldn’t resist the smiling and waving wherever we went. Part of this might also be because we spent such a fun week with friends in Siem Reap, the last week of our stay in the country. With Shannon and Ana we went to Angkor Wat, hung out, swam in the hotel pool and had an all-around fun time.

We also reunited with our friend Jaime in India and having him to laugh with (and during my ‘injured phase’, to cry with too) felt great! Best of all, I was able to be there for my best friend’s wedding in Denver this June. For the past 14 years I either been living abroad or traveling,  so being around for such a significant life moment for one of my favorite people was really important to me! 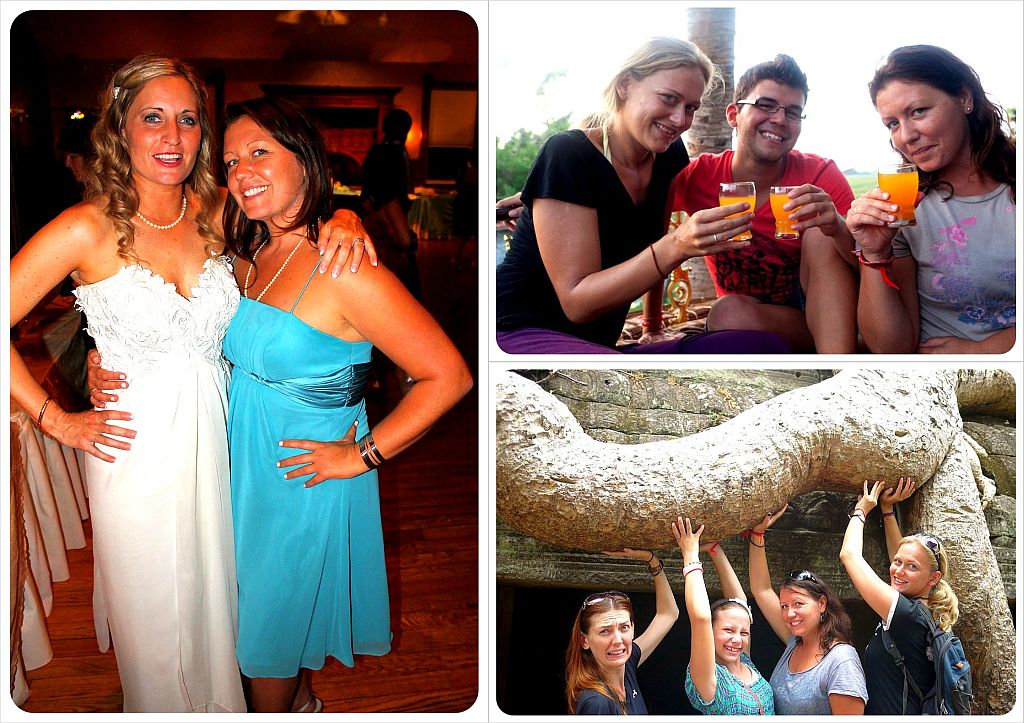 Our lives let us live some intense contrasts

The day we flew from Siem Reap to Singapore was one of those major contrasts I was talking about. We started the day in a rickety tuk-tuk on the way to the airport, and after landing in Singapore, we hopped on one of the most modern and efficient metro systems in the world. We take to big cities like fish to water, so exploring Singapore was an incredibly refreshing change. While in Cambodia you’d be hard-pressed to find anyone in a suit but plenty of pigs on the back of motorbikes, Singapore is all brand-new shiny cars, start-ups and excitement about the future. This was an entirely different world, but still very much an Asian city.

After a quick stop in the Malaysian colonial city of Malacca, we were flung into an entirely different world yet again…our first trip to India. This country, or rather sub-continent, is so unique, and so unlike anywhere else we have ever been that just being there made the world feel bigger and smaller simultaneously. Let me try to explain. Obviously, the more we travel, the smaller the world feels. We buy a plane ticket, fly in, and suddenly, places we had only heard about are a part of our reality within that same day.

But being in India is so different to the Americas, Europe and Asia that it felt like I finally had this triangulation point. A third place in the world that was so incredibly different to anywhere we had ever been before. There was less of a feeling that we had conquered India as travelers, having only visited Kerala, Karnataka and Goa, so we will definitely be going back for round two.

Taking time out to recover is key

There were also those couple of injuries I had in India that completely incapacitated me. Despite access to quality medical care, India is chaotic and not the best place to recover. I had my eyes set on one thing only – our time in Tucson. Back in 2010, just two months into our trip, we had a housesit in Tucson, and they contacted us to come back this June. We loved the dog, the house, the pool, the homeowners and Tucson itself, so it helped so much knowing that after a roller coaster ride in India, Dani and I both could relax, recover and regain control of our schedule in Arizona.

This led to another extreme contrast, as Tucson couldn’t be more different to India. We went from the kind of heavy humidity that presses your chest and frizzes your hair, to the dry scorching days that crack your skin and dehydrate you instantly – luckily we much prefer Arizona’s dry heat and we relished the 110-degree days. A comfortable rhythm of dog-walking, running errands, reading great literature for an hour at the pool and working early in the morning and then again in the late afternoon felt great, and slowly but surely my injuries healed up nicely, and just in time to help with the wedding in Denver.

We love where housesitting brings us

Day 800 finds us in our most remote location yet. We are now in Mexico, on our 11th housesit assignment in two years. Here for two months, this will be our longest stop yet –  looking after a beach house and a rather playful guard dog. We plan to work, snorkel, and experience the ebbs and flows of life on the beach. 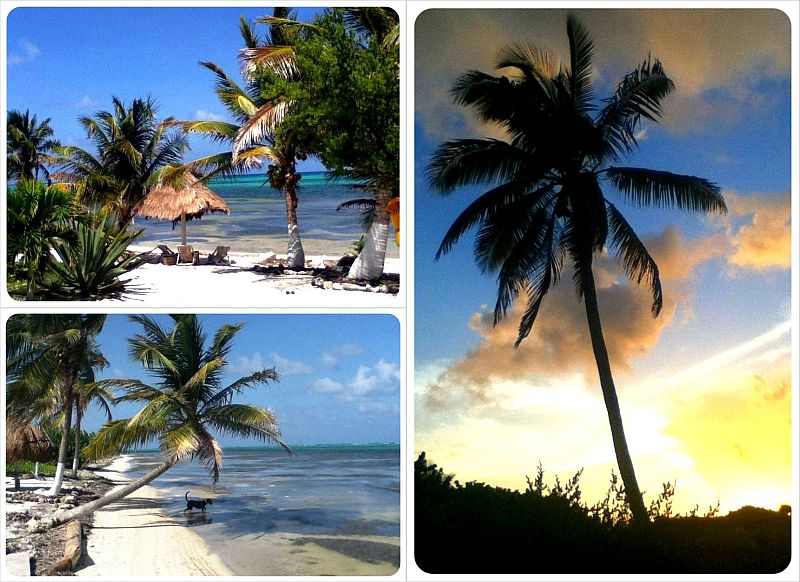 After this we have absolutely no plans. We have a sneaking suspicion that South America might finally be a part of our near future, but we can honestly say that we have no idea where we will be writing you one hundred days from now…

Notes from the beach house | Week One