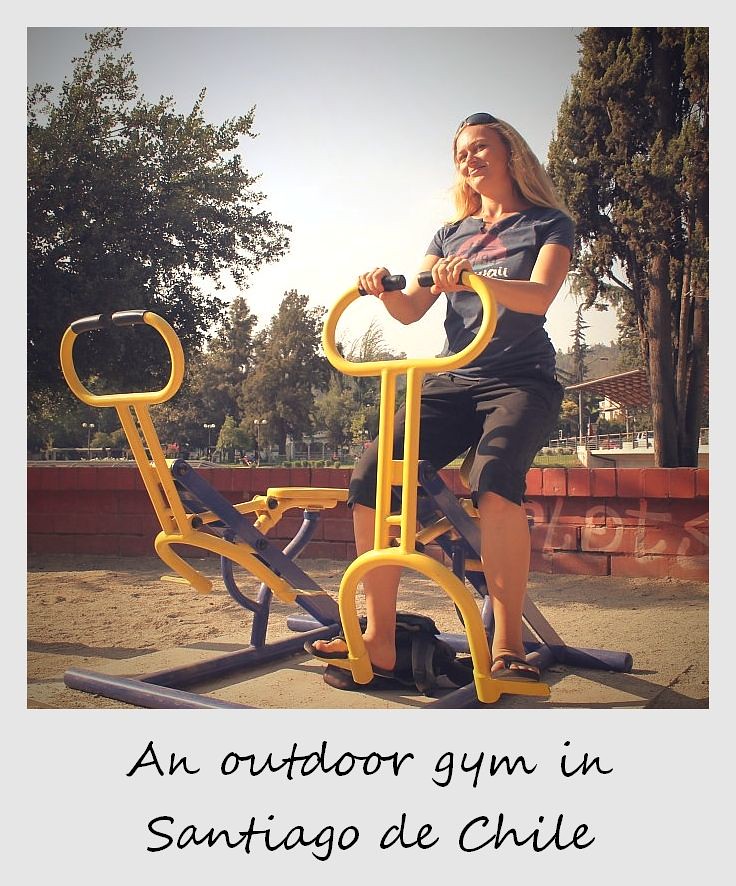 In our 33 Things We Love about Buenos Aires post, we remark on how active the people are in the Argentine capital, but just a few days here in Santiago reveal that this city is workout-crazy! With the snow caps of the Andes setting the backdrop to the city, many Santiago residents enjoy skiing and hiking, but every day throughout the city people are working out everywhere we look. The layout of the city seems like it was created wit joggers in mind, with bike paths and running trails in parks as well as in the green center of every major thoroughfare in the center. Every morning and every night when we take our dogs out, cyclists and runners buzz past us en masse, and they are almost always completely kitted out in all the gear, from amazing bikes to matching customized running shoes and shirts. On Sunday mornings there is a running group so large, Jess thought there was some sort of marathon passing by our house.

Countless outdoor gyms dot these trails and parks, especially the 8km stretch connecting downtown Santiago with the foothills of the mountains in Bicentennial Park, near where we are living. We have seen outdoor gyms like this everywhere – in Asia, North America, Europe, Mexico – but the Santiaguinos (as the people of Santiago are called) really, really use them. The ‘ outdoor gyms’ were actually introduced as part of the Elige Vivir Sano (Choose to Live Healthily) program, a government initiative promoting healthy living headed by Chile’s first lady Cecila Morel. A recent study concluded the program inspired 500,000 Chileans to start exercising three times a week, but honestly, here in the capital alone it feels like more. Although I don’t have on any fancy gear in this picture, we spent time using an outdoor gym the other day, as we both love how Santiago’s active vibe matches our own enhanced fitness regime in recent months!

8 of the Best Day Trips from Split, Croatia