Six hundred days…if 600 days ago someone would have said that not only would we still be on the road, but that we would be doing everything in our power to maintain this for at least another 600, it would have been a hard sell to convince us.

While these past 100 days have flung us into an entirely different world yet again, we somehow feel more well-rested than we did in our 500 Days Reflections thanks to a relatively quick and essentially effortless adaptation to South East Asian living. The last one hundred days could have not been more filled with contrasts, as we went from enjoying the creature comforts of Chicago to the sweltering heat of Thailand.

We were exhausted when we finally pulled in to Chicago after 34 days straight on the road through Canada and the U.S. this summer, but there was no resting – we arrived just in time for Jessica’s birthday – the first she had celebrated at home in Chicago since 2000! Our amazing friend Megan threw the perfect birthday bash. From there we did loads of sightseeing, got through loads of work and spent quality time with friends and family. It felt great to be home for Jessica’s Dad’s 60th birthday – a major milestone indeed. 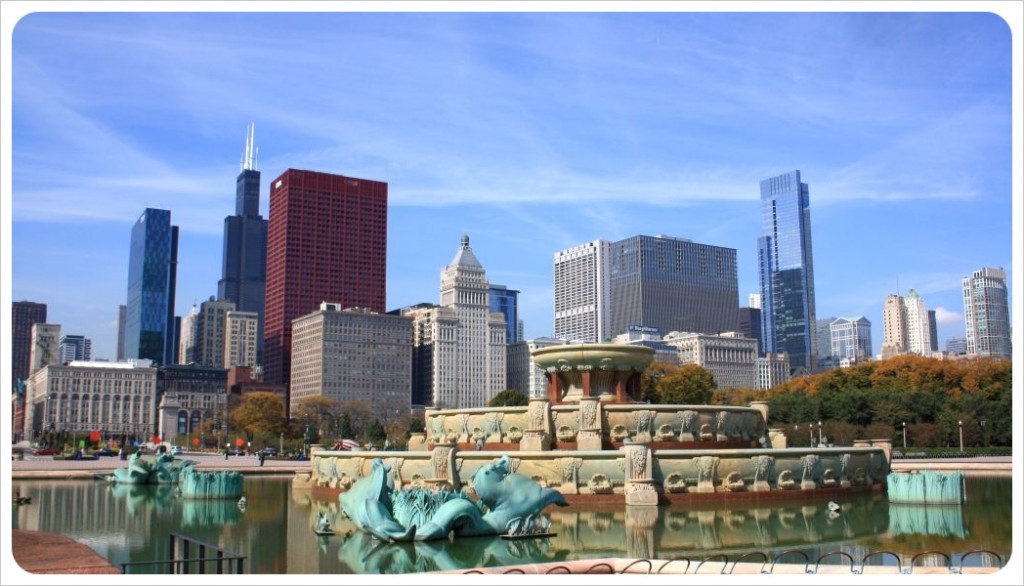 From Chicago we stopped for a week in Denver, Colorado, to visit Jessica’s sister from another mother Tracey and her Cuban fiancé Felix before boarding our longest long-haul flight to date – Air China from Denver to Bangkok via San Francisco and Beijing.

Bangkok could not be more different to Chicago. It wasn’t only was the change in climate (roughly 40 degrees warmer over here) that shocked our systems – everything from the food (no cheese, no bread, Thai food day and night!) to the people and the language (Thai – which with its five tones and entirely unfamiliar script is more challenging to learn than training for a marathon) were worlds away from Chicago. 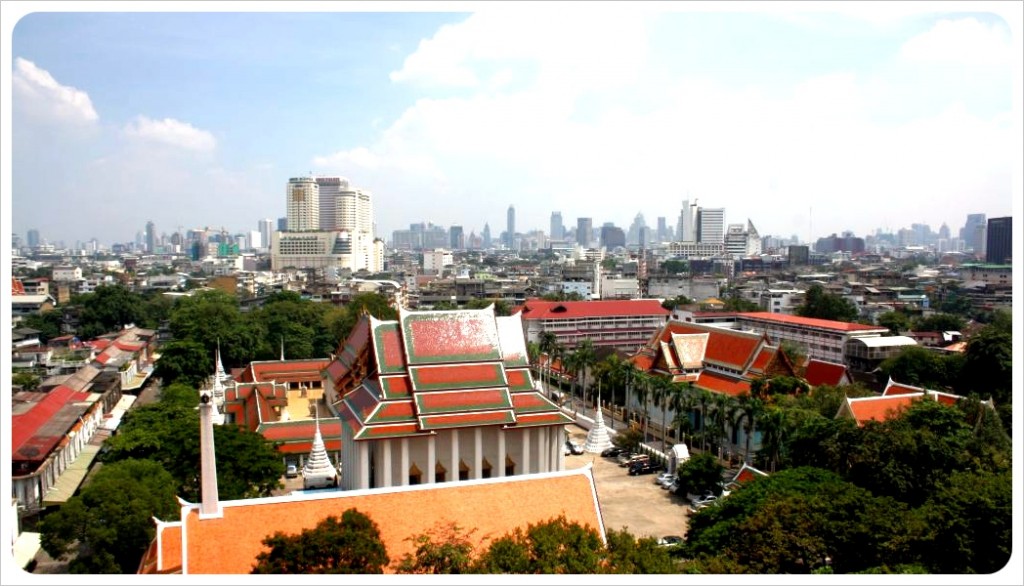 It turns out that the food could not have been a more welcome change. After months of stuffing too much American food down our ever-unhealthier bellies, the freshly-prepared, nutrient-dense Thai food was good for our bellies and our wallets – for $2-$4 a meal (in a restaurant)! After just a few days, we also became surprisingly accustomed to having monks around every corner. Monks on bikes, monks on their cell phones, monks at the temples, ceremonies involving monks – even making small talk on public transport with monks. It’s hard to imagine a life without them now!

The weather took a bit longer to get used to. We knew it would be hot, but suddenly it was as if we were stuck in a sauna day and night. There is a solution to this – and it is called the mall. Bangkok’s famous MBK Mall is an incredible structure where, short of livestock or airplanes, you can buy just about everything in the world. However, as we quickly learned, a mall in South East Asia is not simply a temple for capitalist worship as it has become in the United States. The mall is a true lifesaver in the fight against the unrelenting heat and humidity of its immediate environs. A tough start in Asia…

Truth be told, however, our Asian adventure got off to a rocky start.  We were scammed in Bangkok. Big time. Look for more in a separate post coming soon, but it took weeks for us to get over this slimy, sneaky scammy scheme and we were particularly bitter that it happened in a country known to everyone else as the friendly Land of Smiles. We felt tricked and cheated when we then arrived to the island of Koh Lanta, and just as we recovered from that incident, Dani went head first into a ditch within the first ten seconds of our first motorbike rental.

We planned to do most of South East Asia on a motorbike, so that was discouraging to say the least. Despite that set back, we enjoyed our week on Koh Lanta (and our wonderful little holiday getaway there) but were then terribly, utterly incomparably disappointed with the other islands we visited in the Andaman Sea before flying into Chiang Mai.

Getting our mojo back in Chiang Mai

This northern Thai city is certainly no hidden gem – in fact its smack dab on the tourist map – and we couldn’t care less about that. Chiang Mai is possibly the easiest, most comfortable city to settle down in for a while – and there is no question why so many digital nomads just like us make this city the place where they spend extended periods of time.

In fact, in the city has everything we needed to give us our travel mojo back: every kind of Western and Thai food (including the best Tex-Mex we’ve had outside of America), countless coffee shops, 80 degree sunny days and cool, comfortable evenings and excellent company. We met up with dozens of fellow nomads and bloggers and got started on some bigger projects we’ve been meaning to create for a while now. Our 30-day tourist visas were nearing expiry, but instead of simply moving on to Laos, we decided that we would visit Laos, pick up a longer Thai visa, and head back to Chiang Mai for a month. The day before leaving on our three-week tour of Laos, we booked a nice apartment in a modern building within walking distance of everything in the Old City for $320 a month. Sweet! Ah, Laos…We love it now, but it took a while to warm up to Laos. The first few stops were truly unremarkable, but it seems that we may have sort of snuck in to the back door of the country. That is, until we arrived to Nong Khiew.

This sleepy river town easily became one favorite place in Laos and one of our favorites of all time. We hiked, we cycled, we slept, we ate and we even stayed an extra day. From there we visited a dreamy little place we don’t even want to tell you about (because we love it so much and want to keep it that way), made obligatory stops in larger cities like Luang Prabang and Phonsavan and went through the bizarre loop-hole laden Thai visa process in Vientiane. As much as we have grown to love a bit of stability in this nomadic life, getting our backpacks back on and settling in to weeks of heavy travel re-introduced all those feelings of excitement, exploration, and learning about other cultures that we so loved during our time in Central America last year. The rural villages of Laos were a huge change to well-developed Thailand and we had the opportunity to get to know many people whose lives are so much simpler than what we know from back home.

While we try not to be naive, and not to simplify this too much, we honestly do find that many of these people are much more content and way more friendly than people back home.

Overall, there is less stress (no one in Laos is worried about their credit score or making it to the post office before it closes) and families spend much more time together. From the smallest villages to the capital of Vientiane, families still gather around an outdoor stove or fire where white and sticky rice cook, and around it they eat together as a family each afternoon and evening. While on the one hand we have a huge appreciation for the advantages we have had and the fact that we get to travel and do what we do, we are equally mindful that a simple life is may just be the best kind overall (but with Macbook Airs, iPhones and coffee). In a short span of six weeks, we covered nearly 4000 miles (6320km) in Thailand and Laos, so after moving around quite a lot again, we are happier than ever to be enjoying Chiang Mai and celebrating the holidays with like-minded folks – after a lonely Christmas and unspectacular New Year’s in Honduras last year.

We had originally planned to explore Vietnam and Cambodia after our stint in Thailand, but as they have a habit of doing – our plans have again changed unexpectedly. This almost always has to do with a housesitting gig – and this time is no different. We will be watching an apartment and its resident cuddly cat in Kuala Lumpur in January. So we are headed to Malayasia for that and to finally get some quality beach time in again before spending time in Singapore and Indonesia. And then, we guess Vietnam and Cambodia – but as always our plans are ever-evolving…

No matter where we end up – we’re excited to see more of South East Asia and if you have been to Kuala Lumpur, let us know your tips in the comments below.