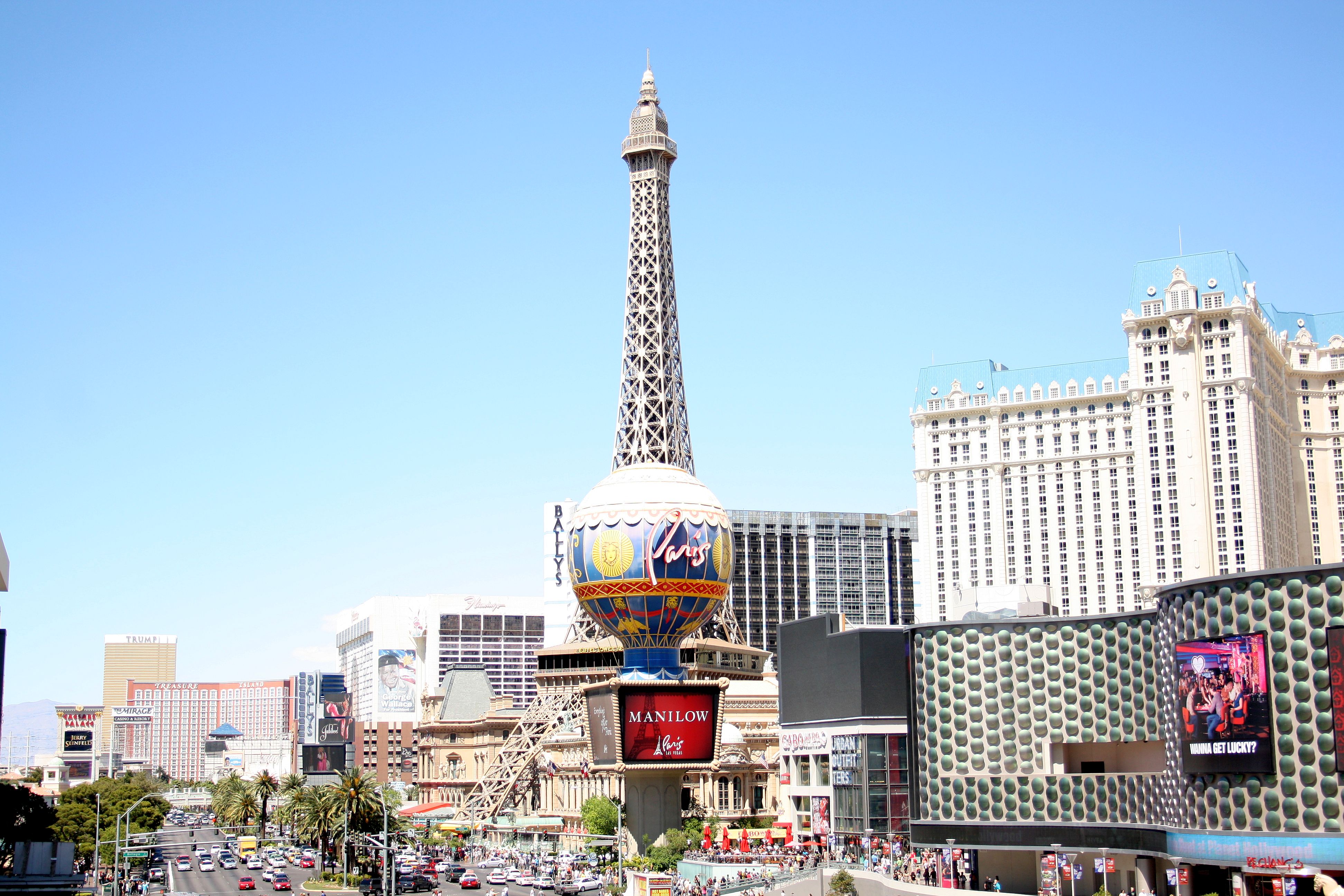 We never meant to start our globetrotting adventure in Las Vegas. Instead a series of random circumstances led us to start in Sin City, but after three and a half cold & rainy years in England, the sweltering and sunny Nevada desert seemed the perfect kick-off for our around-the-world journey.

Neither of us are any good at gambling, and with no desire to lose all our savings to slots and booze, we set out to explore how to enjoy the city of Vegas beyond the sin. 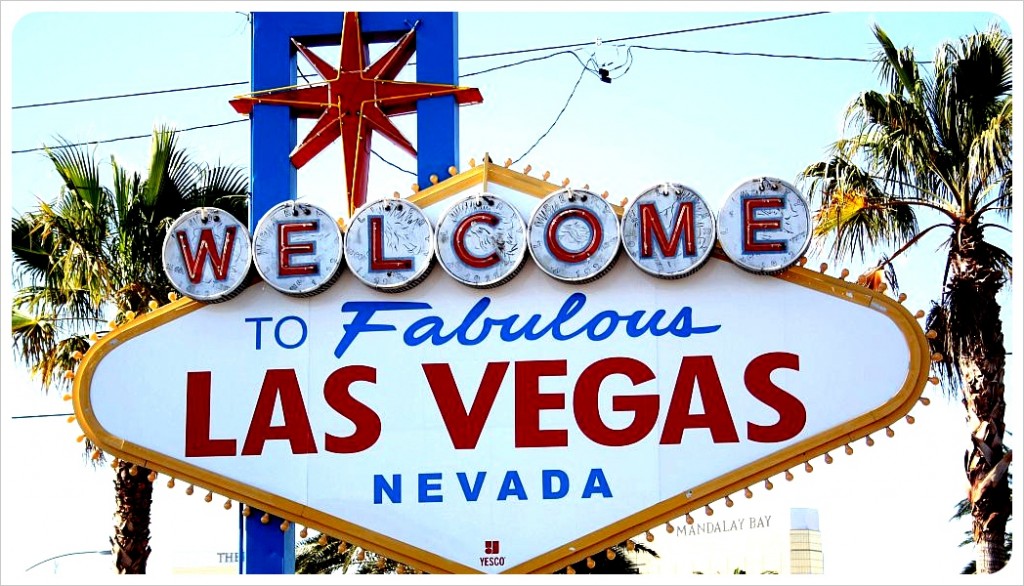 Here are our Top 10 Non-Gambling Things To Do in Las Vegas:

1. Stroll up and down the Strip

The 4.5 miles between the Mandalay Bay Hotel in the south and the Stratosphere hotel in the north offer nearly infinite people-watching pleasure. Either belly up at an outdoor bar/restaurant like the tequila and taco treasure – Planet Hollywood’s Cabo Wabo, the silly slots and parrots outside the Flamingo’s Margaritaville bar, or for an Ocean’s 11 replay, score a spot at the fountain in front of the beautiful Bellagio hotel. If it’s not too hot, definitely go for a walk – there are so many things going on along the Strip, you’ll miss them if you take taxis every time you want to go somewhere. 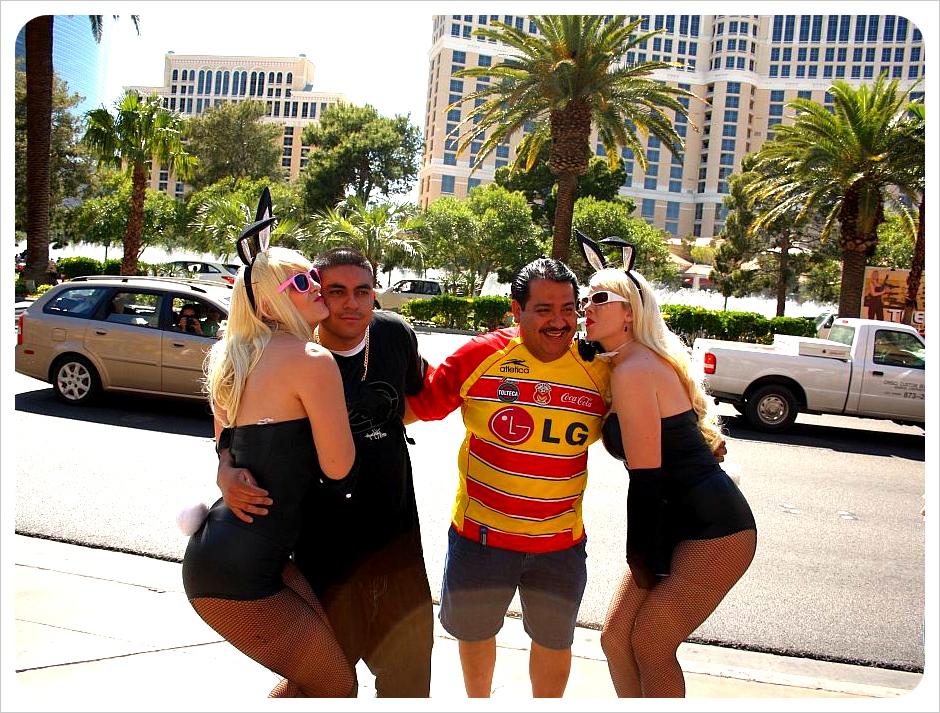 People-watching throughout Las Vegas, you are almost certain to see at least one, but probably more of the following: the heaviest (or even thinnest) person you’ve seen in your life, too many tattoos, people from countless countries, the most eccentric, or eclectic groups of rich or poor, lucky or un-lucky bunch of average Joes or crazy Susans and other interesting creatures than you’ve ever seen in your life. Lean back, sip your margarita and enjoy.

The best free entertainment in Las Vegas, right on the Strip, are:

2. See Vegas from above on the Eiffel Tower

The Las Vegas Eiffel Tower Observation Deck (120m/460ft) doesn’t come anywhere near the height of the true blue Parisian version (324 m/ 1,063 ft) but it offers fantastic views over the Strip, Las Vegas and the desert beyond. 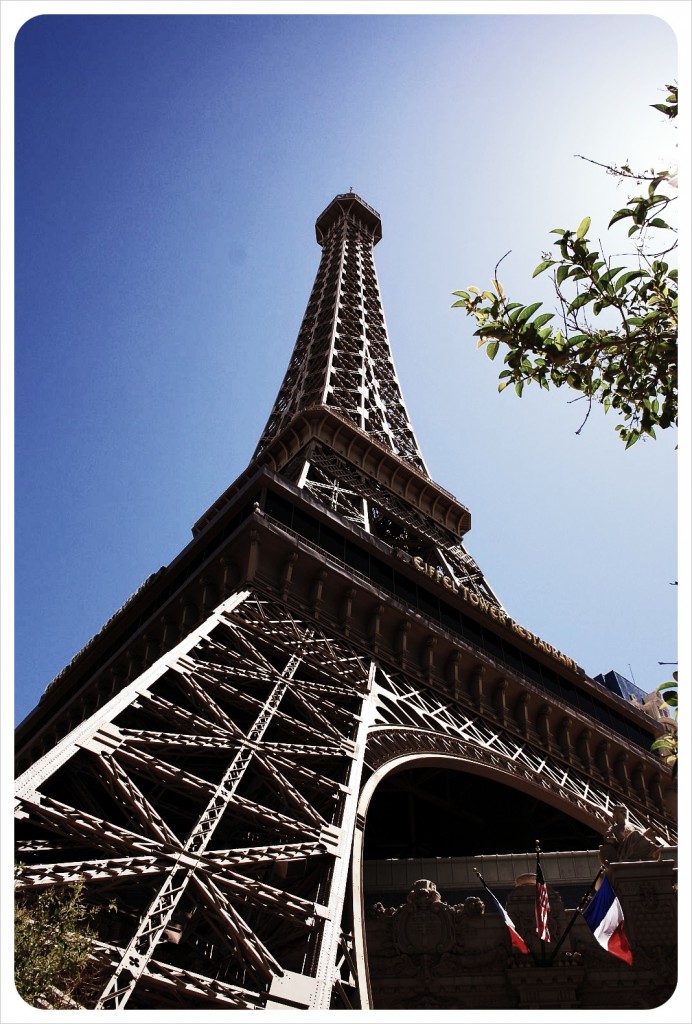 Tickets are $20 per person ($11 per child) – pick up one of the free Vegas brochures that are available up and down the Strip for a 2-for-1 discount. There is also a $50 family ticket (2 adults and 2 children).

Don’t want to risk waiting in line? Buy a Skip-The-Line ticket – they start at only $22. I’d recommend this if you’re visiting on a busy Holiday weekend.

If you want to see the bright lights of Las Vegas at night, be aware that the night time tickets for the Eiffel Tower are a bit more expensive, and lines tend to be longer. A night time ticket (after 5pm tickets are $24 / $21 for children). 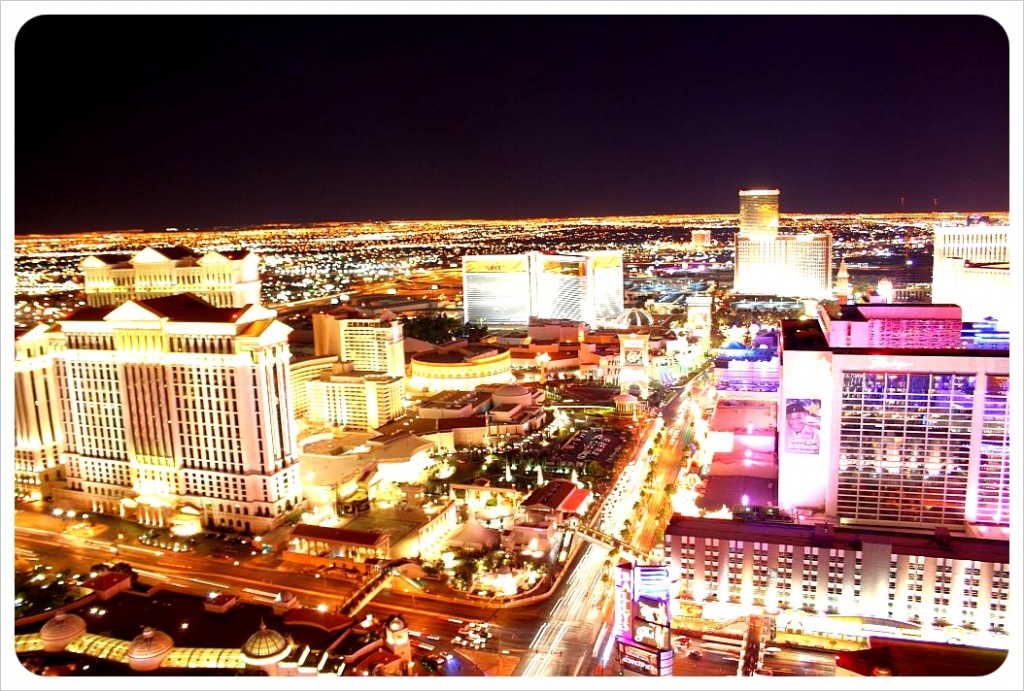 A trip to the Fremont Street Experience inspires the nostalgic, classic Las Vegas of the early 20th century before Sin City became the epitome for bigger, better, more. 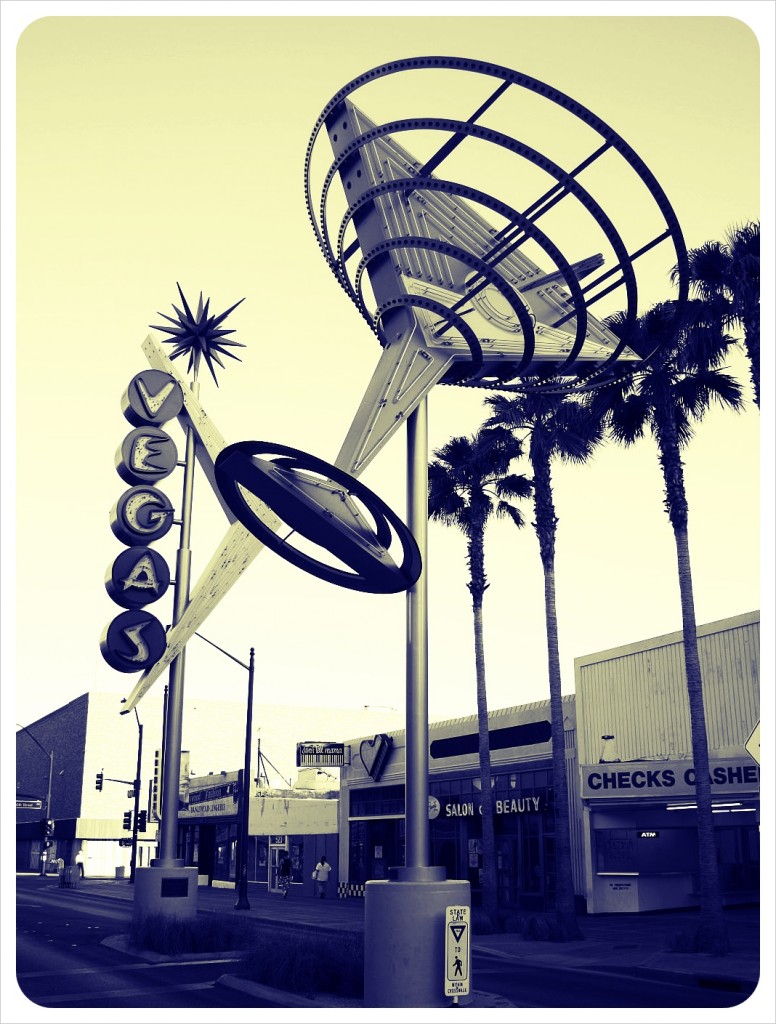 Many of the famous hotels and casinos such as the Golden Nugget are still operating and you can feel the special flair that Vegas must have had in the 1950s. 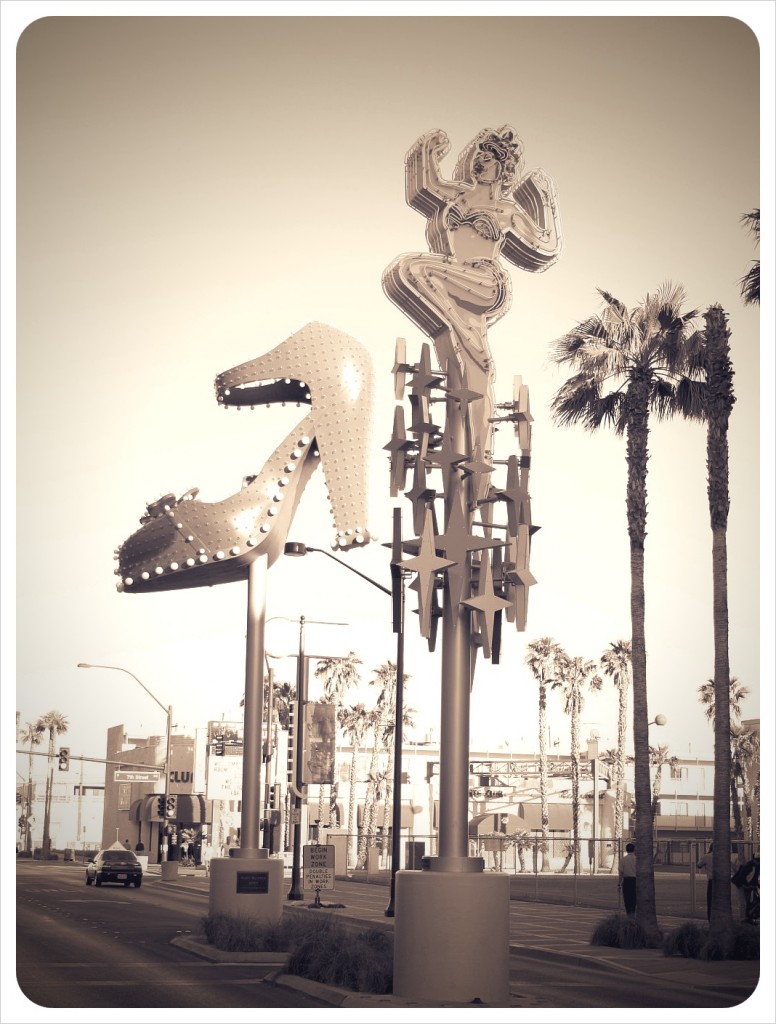 In the 1990s, a roof was built over Fremont Street and area of Old Vegas was repackaged as the Fremont Street Experience in an attempt to draw visitors back after numbers sunk thanks to the explosion happening over on ‘The Strip’. We could give or take that darned roof overhead, but the casinos are more fun, there is more free entertainment, the staff is more friendly and apparently the odds are even better.

Tip: If you are visiting the Freemont Street Experience, make sure to stick around until the evening which is when the incredible Viva Vision light show begin to run every hour. The schedule varies depending on the season, but start times range between 6pm and 8pm – check the schedule before you head there. 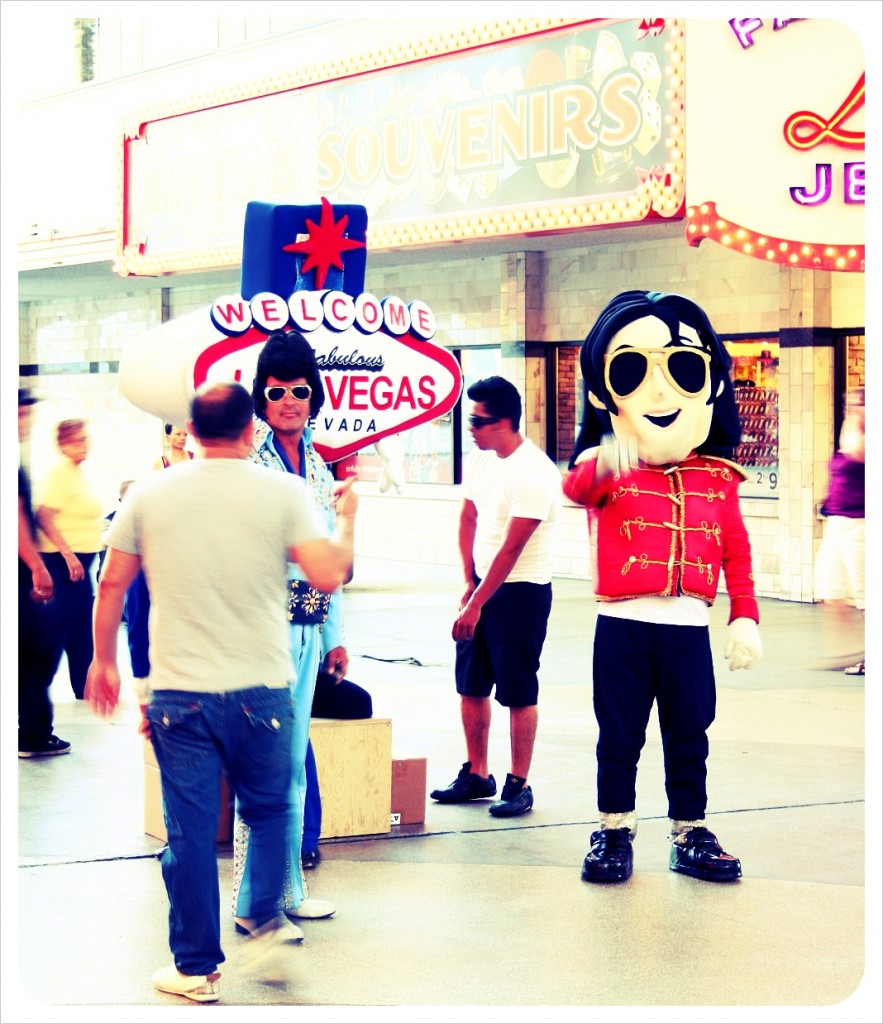 4. Explore the magnificent hotels (and free shows they put on!)

Competition among the hotels on the Strip is fierce, and Las Vegas is one place where the concept of ‘Less is more’ has gone completely lost. 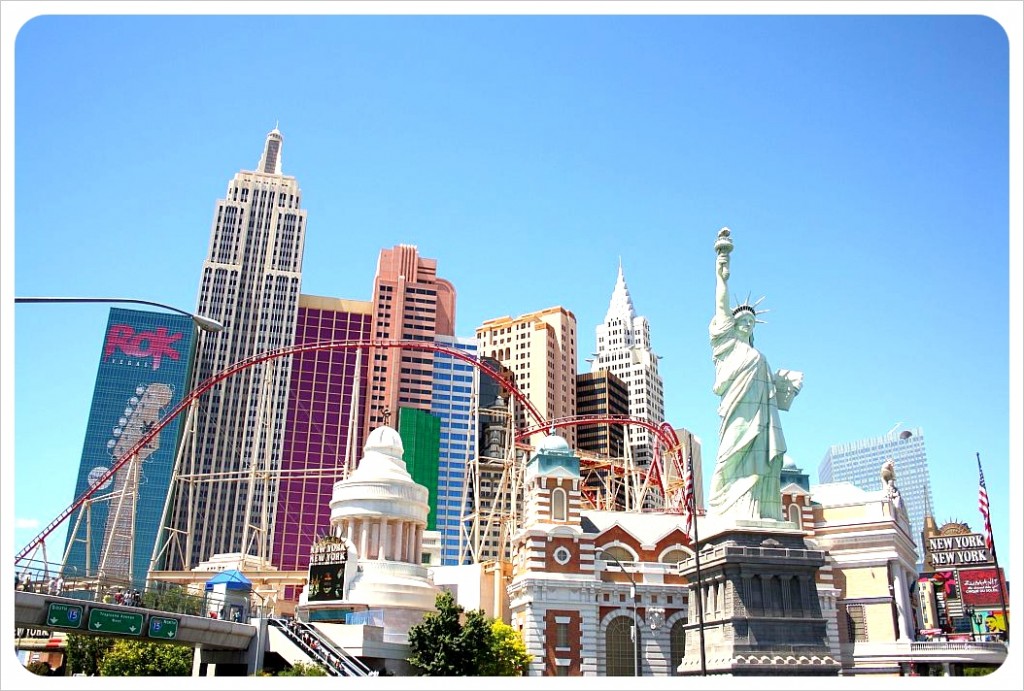 Every hotel is an adventure in itself! Circus Circus has a big top, New York New York has its Statue of Liberty & Brooklyn Bridge replicas and even a roller coaster. Paris has its own Eiffel Tower, and at the Venetian you can take a gondola ride on a canal without the long flight to Italy. 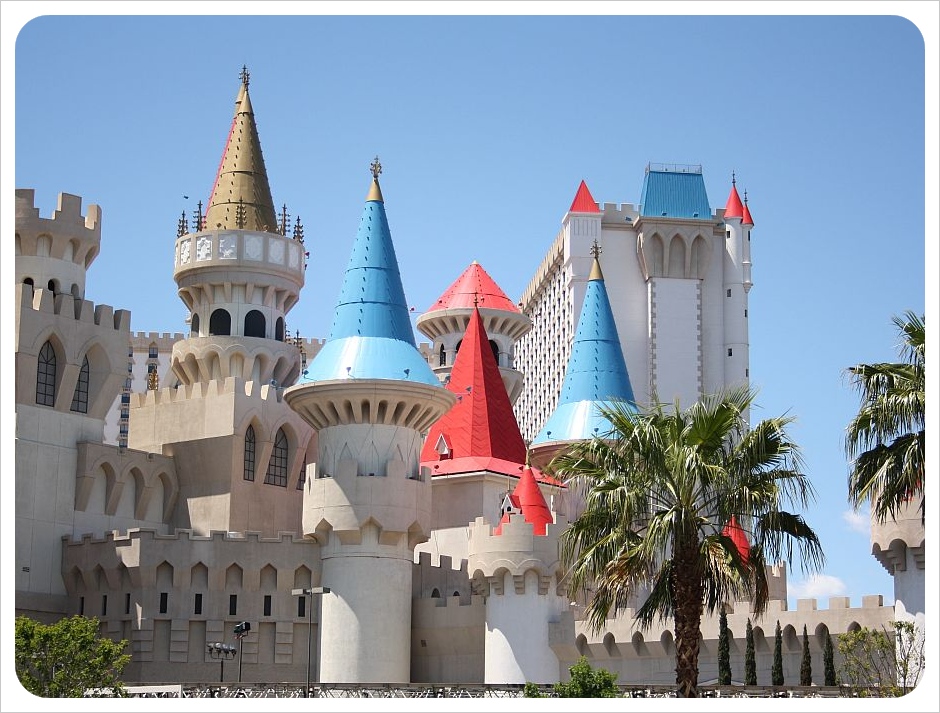 The Bellagio has its famous fountain show and Italy-inspired design, while the Mirage is home to Siegfried & Roy’s Secret Garden and Dolphin Habitat, where you can see Bottlenose Dolphins, White Tigers, White Lions and Leopards – something that especially kids will love. And not to mention daily volcano eruptions, which is one of the best free things to do in Las Vegas. The eruptions, which come with explosions, fireballs and lava, will not only wow kids. (They take place every day at 6pm, 7pm, 8pm, 9pm, 10pm and 11pm). 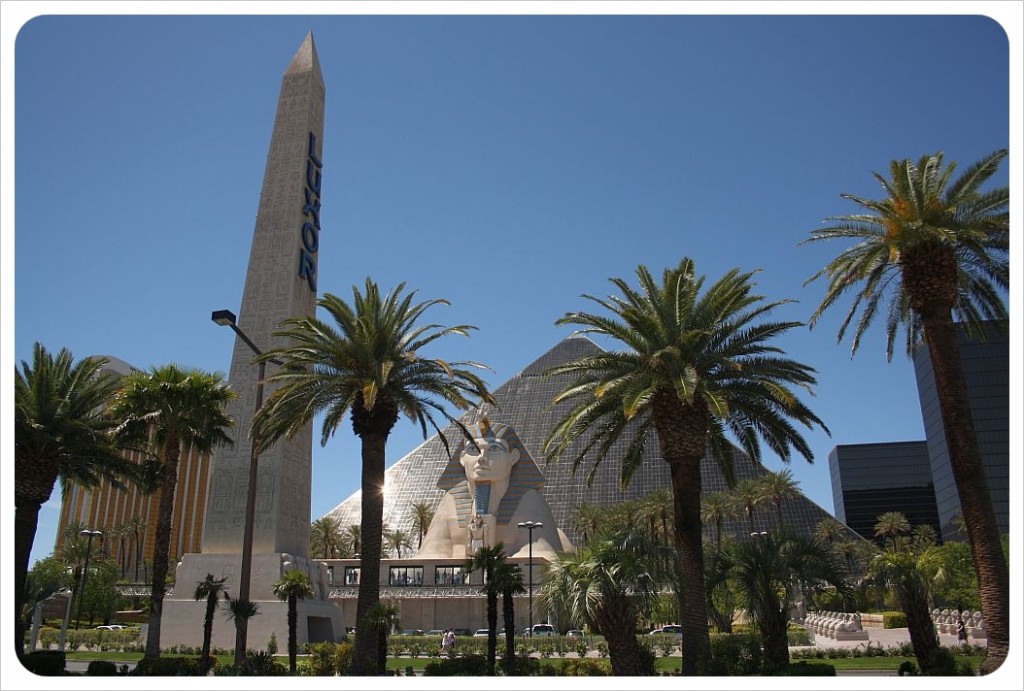 In Vegas you can walk by the Egyptian pyramids at Luxor, there is a replica of the Colosseum at Caesar’s Palace, a pirate battleship at  Treasure Island and and and… who knows what they will come up with next. 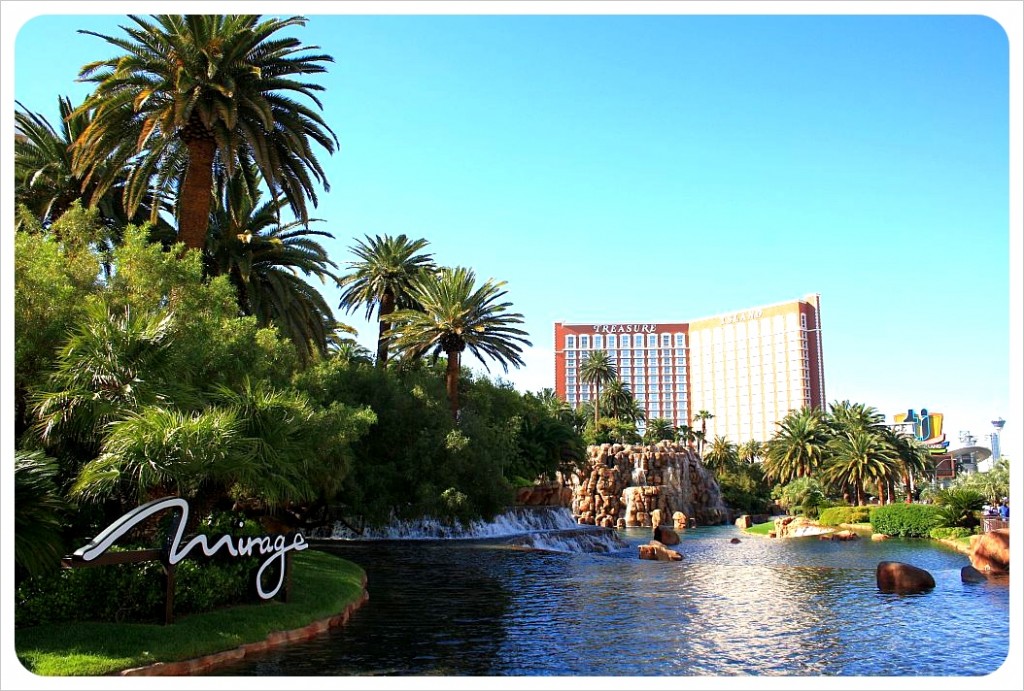 5. Take a ride in Las Vegas

Several hotels in Vegas have added an adventure ride to their premises, but the most spectacular rides can be found on top of the Stratosphere tower: 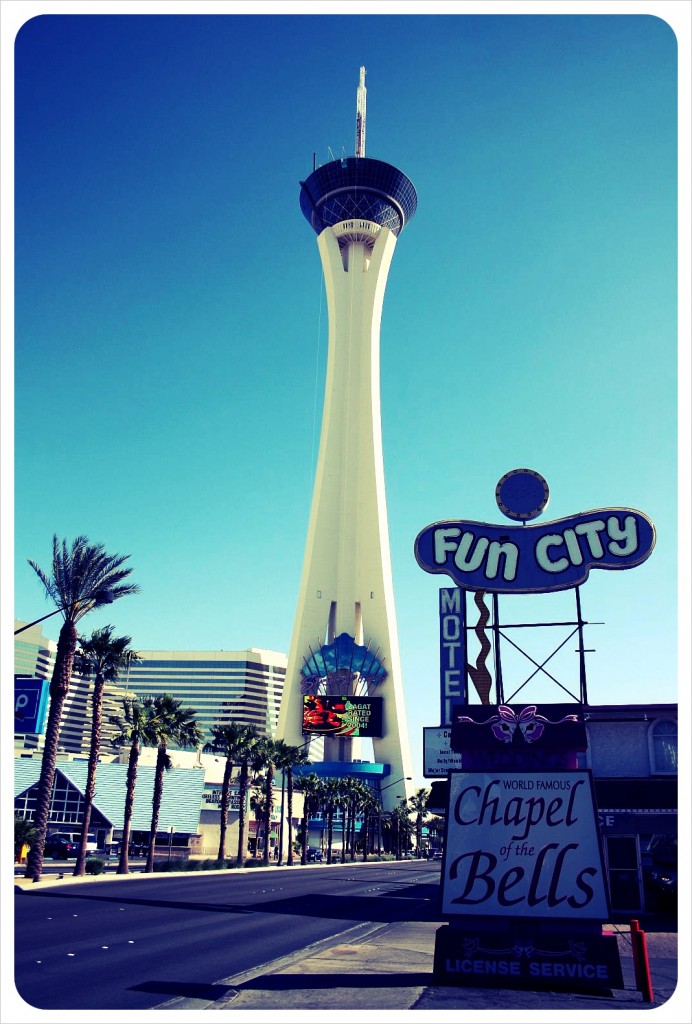 Three extreme rides on top of the 350m (1,149 feet) tower – Insanity, which dangles you over the edge of the tower, Big Shot and X-Scream. If that’s not enough of an adrenaline rush, you can now also jump off the tower with the Stratosphere’s latest thrill: the Vegas Skyjump ($129 per jump).

If you’re heading to the Stratosphere Hotel and plan to go on one of the rides – it’s worth buying one of their packages:

Admission to just the Skypod obversation deck for the views over Vegas is $20* – so adding a thrill ride isn’t actually that much more expensive.

For less of a thrill ride, but the most spectacular views, you can’t miss the High Roller Observation Wheel at the LINQ Hotel. This giant 550-foot tall Ferris wheel (the tallest Ferris wheel in the entire world!) opened in 2014 and has been a huge hit with Vegas visitors ever since. The 360-degree panoramic views of the Las Vegas Valley and the Strip are breathtaking.

Other rides in Las Vegas include: 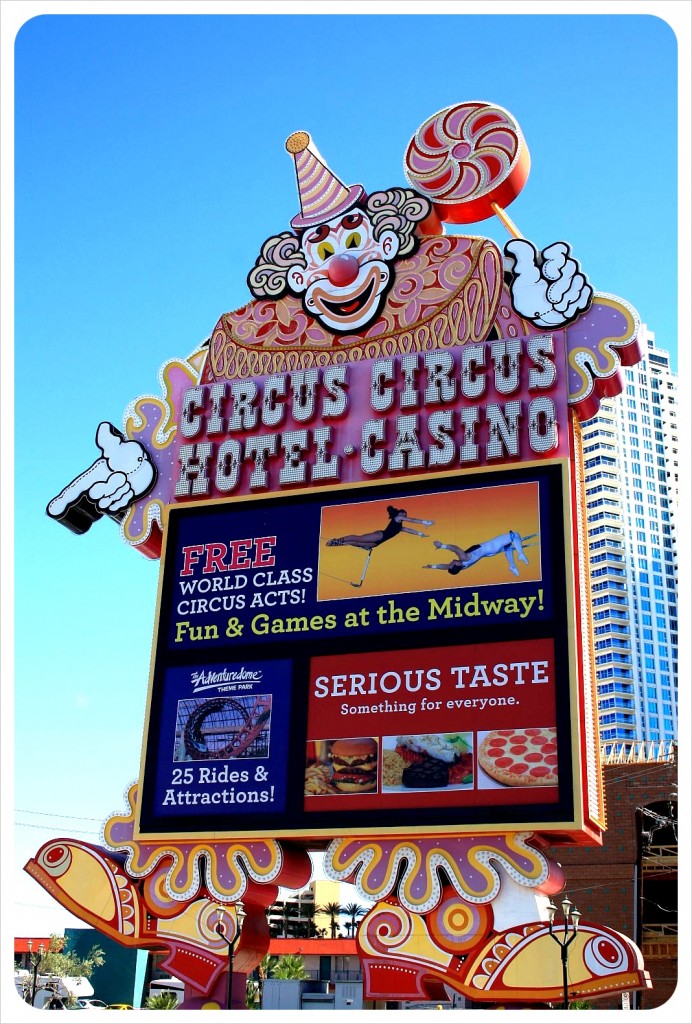 Vegas has always drawn the biggest stars of entertainment to have their own permanent show – there is something for everyone: comedy, cabaret, circus, burlesque, hypnosis, musicals… The biggest thing at the moment seems to be Cirque du Soleil, with currently 7 (!) different productions in Vegas. 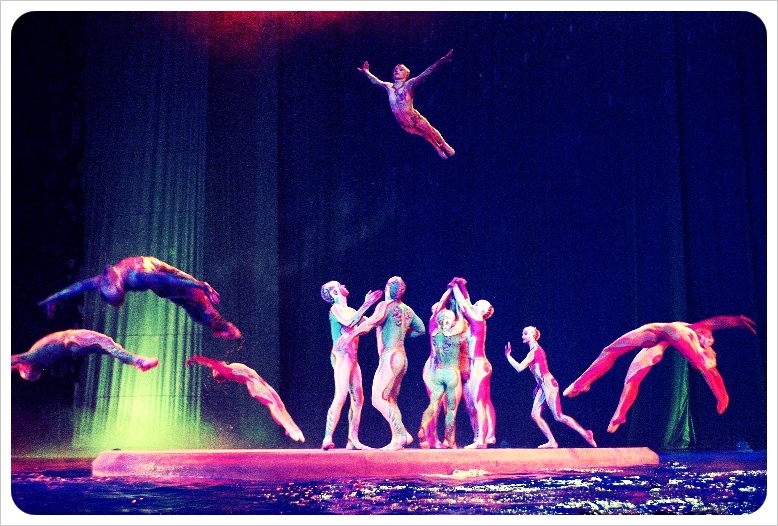 Las Vegas offers some great shopping opportunities for shopaholics: Not only do most hotels have ‘shopping streets’ under their roof (Via Bellagio,the Wynn Esplanade, Grand Canal Shoppes at the Venetian, Forum Shops at Caesar’s Palace, Miracle Mile Shops at Planet Hollywood, Mandalay Place), there are also a couple of malls on the Strip: 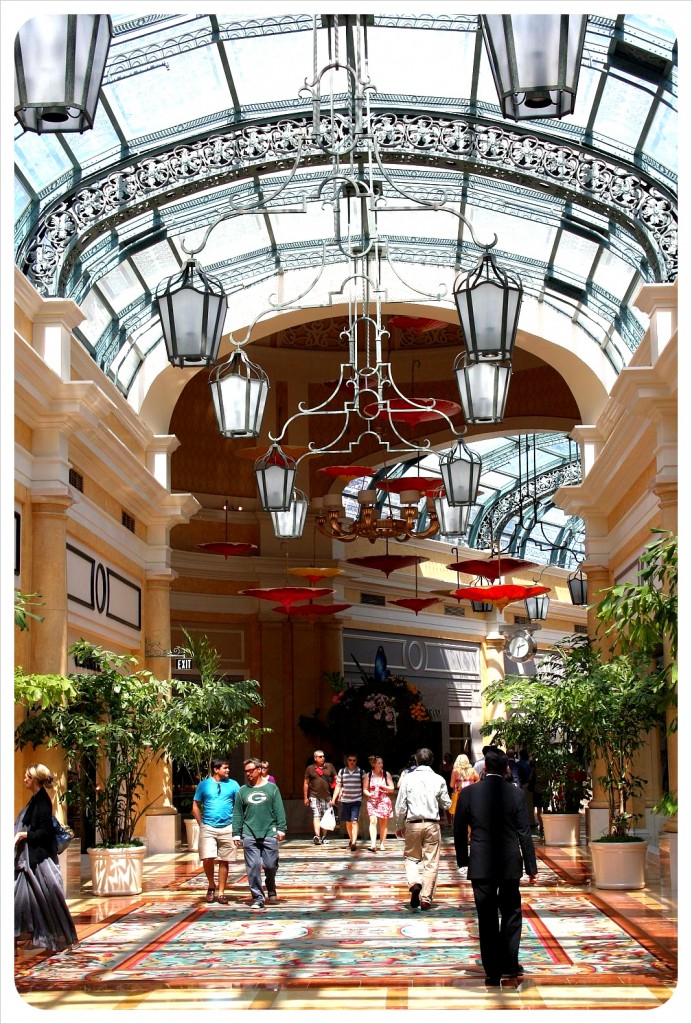 I. The Fashion Show Mall 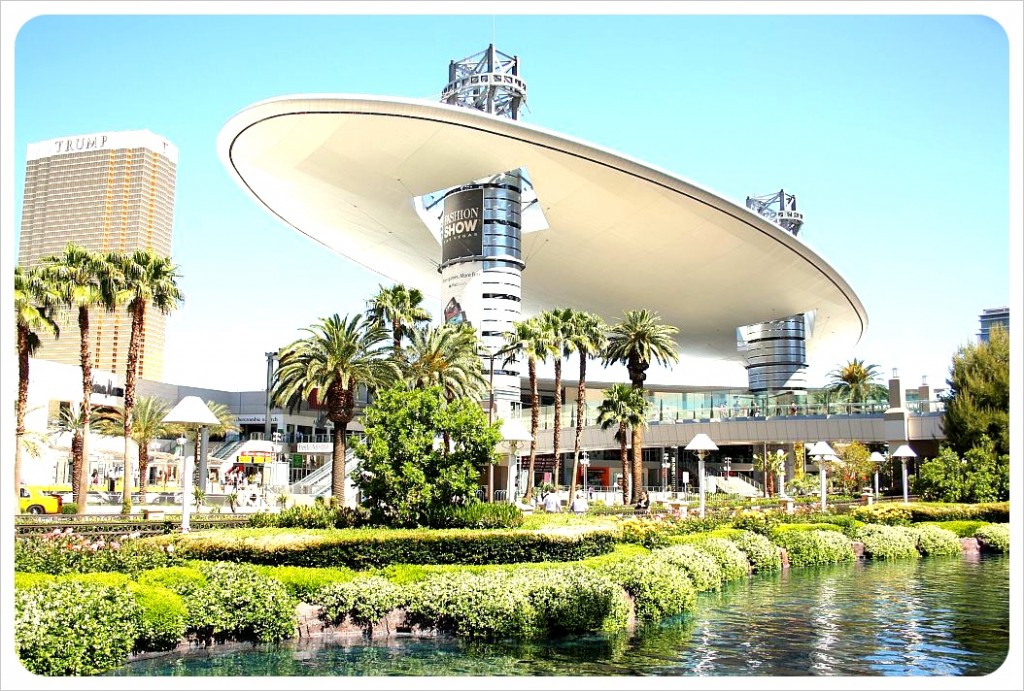 Even animal lovers get their money’s worth in Vegas – with several hotels having some fantastic animal habitats: 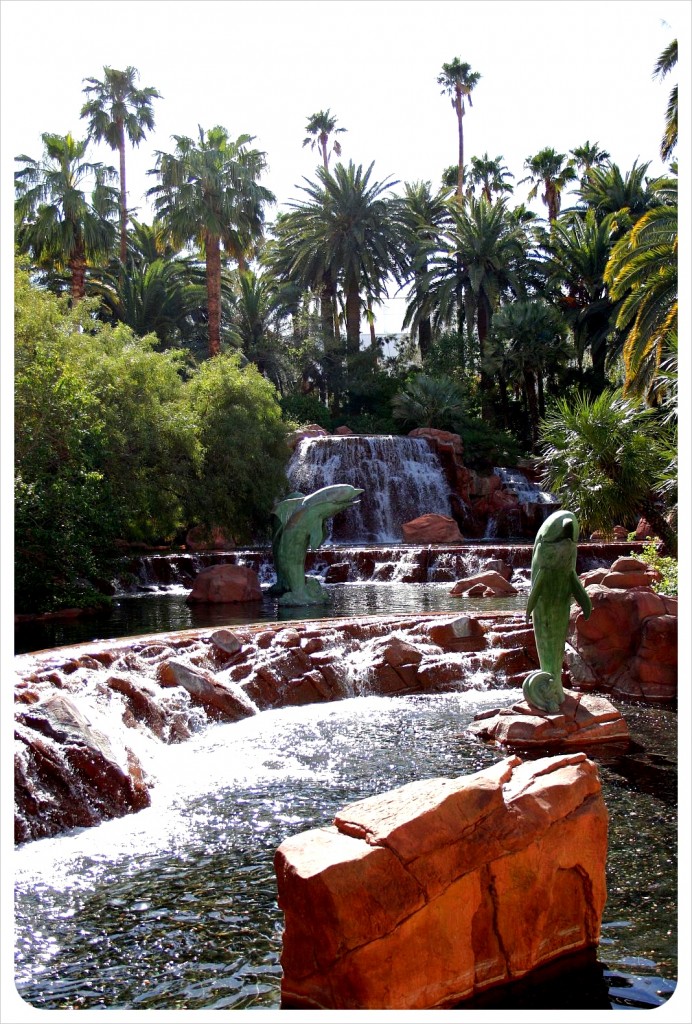 Red Rock Canyon, Hoover Dam or the Grand Canyon – check out our Las Vegas: Get Outta Town for more things to do outside of Sin City. 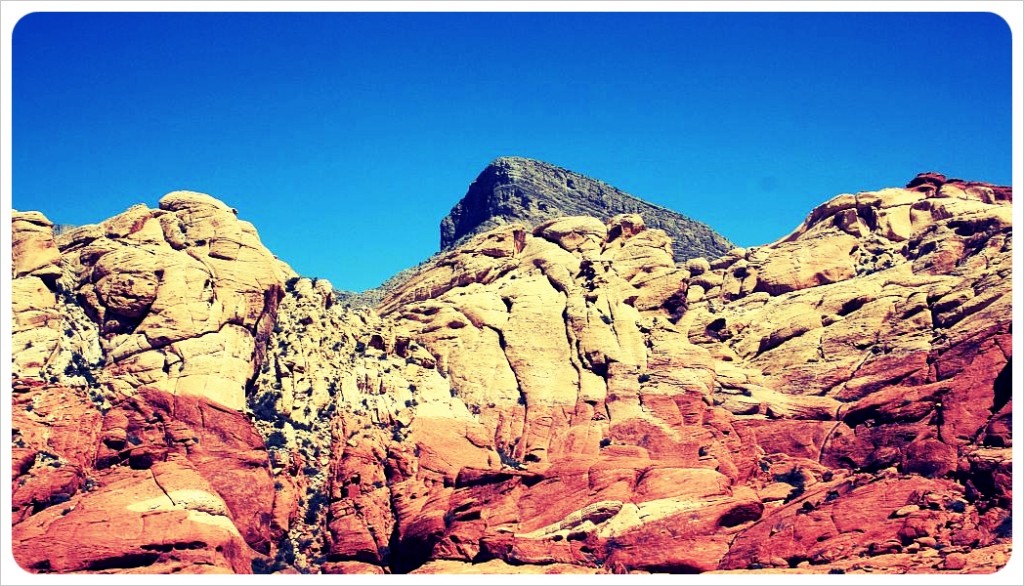 10. Vegas Challenge: The Buffet of Buffets

Success in Las Vegas comes from rising to the challenge. As we mentioned above, the gambling girls we are not. Our challenge, our Everest if you will, was food-based. It was the Buffet of Buffets – a 24-hour pass to seven of the biggest and best gut-busting buffet in Vegas:

The Buffet of Buffets pass is $69.99 on weekdays and $79.99 on weekends. Weekend Pricing begins at 8pm on Thursday evening. Weekday pricing begins on Sundays at 8pm. On Holidays you have to fork out $99.99 for the pass. If you want to include the Bacchanal buffet at Caesar’s Palace, you pay an additional $25 for a brunch/lunch visit and an additional $35 for a dinner visit. If you have a Caesars Rewards card, you get a $10 discount. 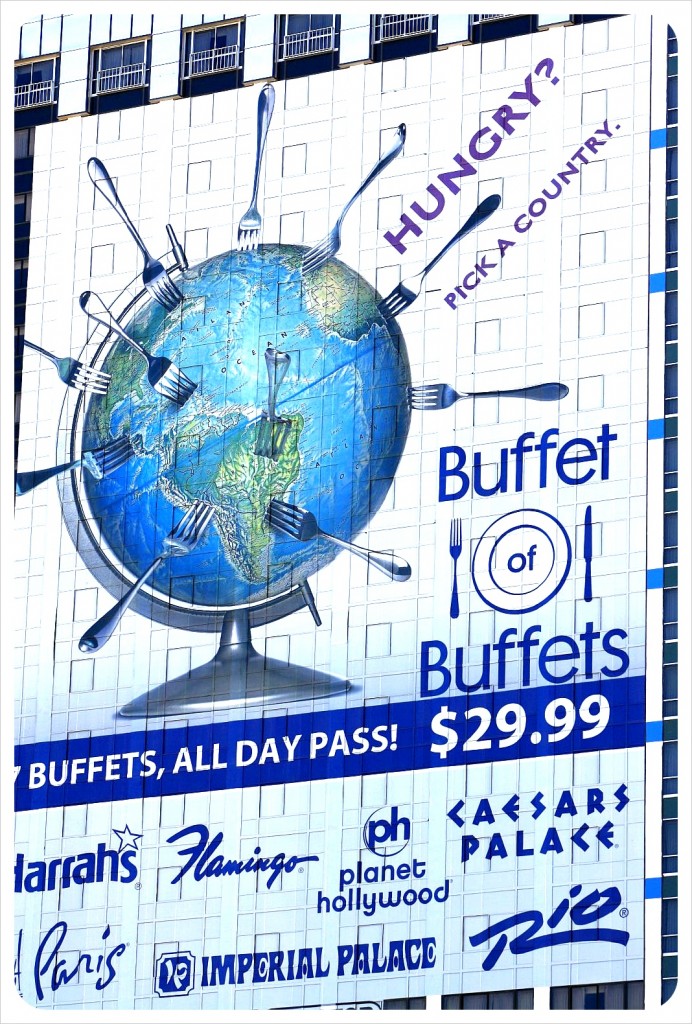 While we may have taken the challenge very literally, (the Globetrotter Girls can proudly boast hitting 6 out of 7 buffets within 24 hours!), instead of testing all 7 it might make more sense to try out 3 or 4 in the better hotels. While the price for the pass has more than doubled in the past ten years, the Buffet of the Buffets is still cheaper than even two buffets would cost separately in most of the hotels. Our favorite was the Le Village buffet at the Paris hotel, and I’d skip the Paradise Garden buffet at the Flamingo Hotel if I was going to do it again.

Depending on how many attractions you’re planning to visit during your time in Las Vegas, it might be worth checking out the Las Vegas Explorer Pass. This pass covers dozens of Las Vegas attractions and will save you lots of money if you want to check out a bunch of things that I mentioned in this article. The Explorer Pass includes things like the High Roller Ferris Wheel, the Hop-on Hop-Off bus tour, the Stratosphere Observation Deck plus the Stratosphere thrill rides, the Eiffel Tower Observation Deck, Shark Reef Aquarium, Madame Tussaud’s,

Additional perks are a meal at Planet Hollywood and a one-hour open bar at Senor Frogs, a 2-day pass for the Monorail, admission to a comedy show and a variety show, an Escape Room, several museums and exhibitions, a Hoover Dam Tour and more.

You can find out more information about the Las Vegas Explorer Pass here. 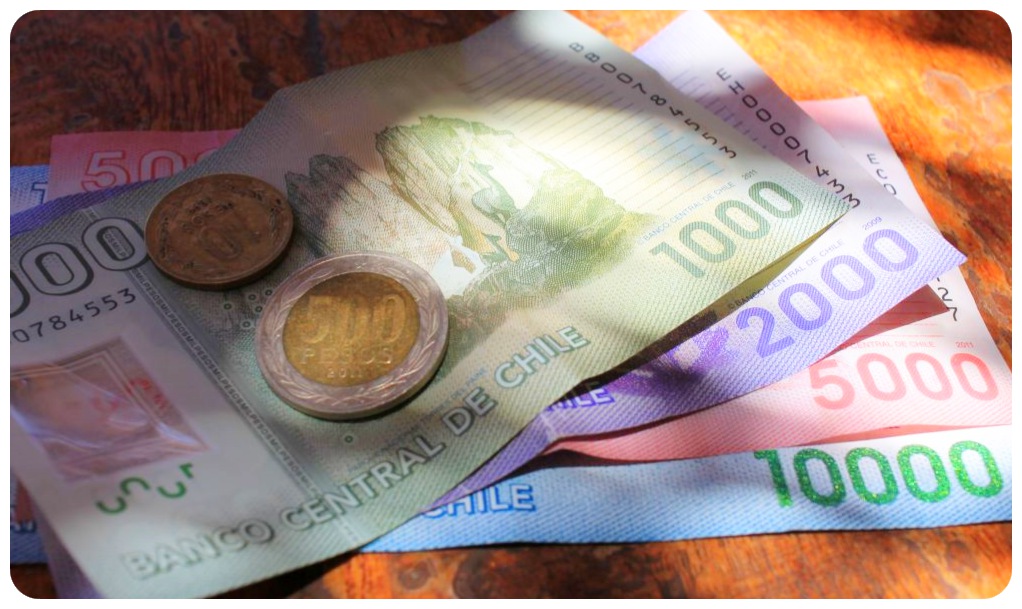 The cenotes near Cuzama are no Disneyland, but the day out has a magical feel all its own