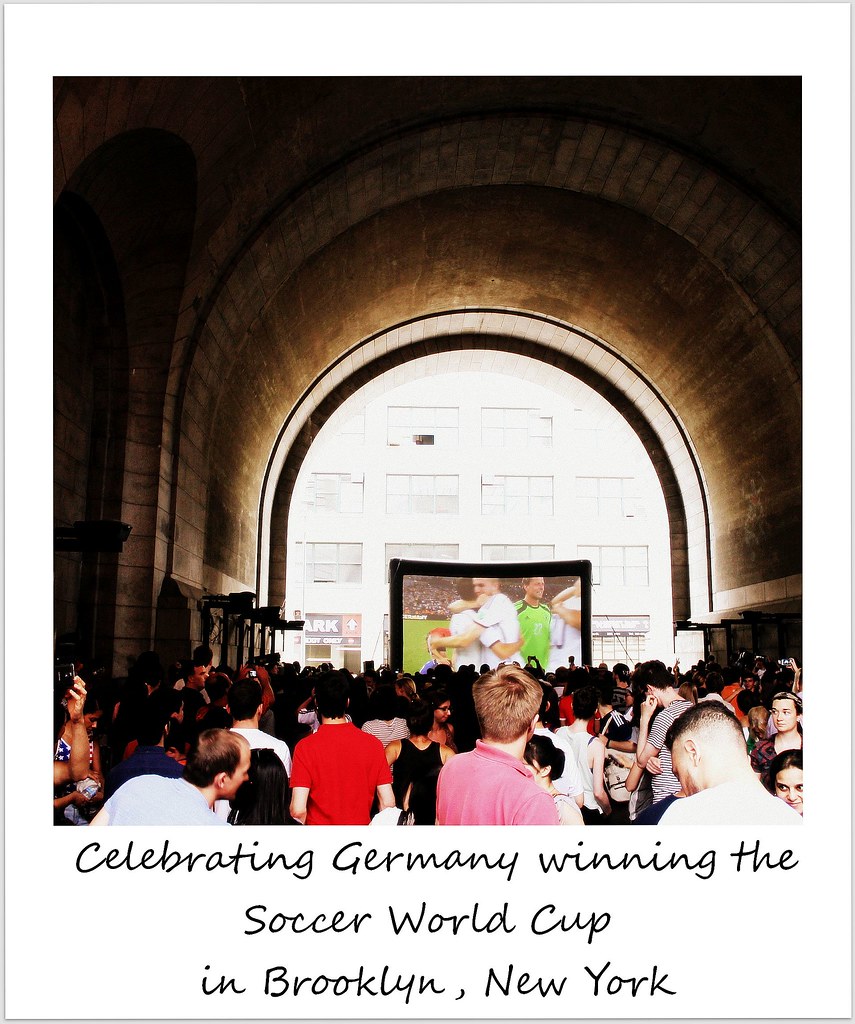 This isn’t the best photo I took last week, but it’s the photo of my happiest moment during the last seven days – the moment when Germany won the World Cup yesterday! I watched the game with a group of international friends (we had Americans, Germans, a Ukrainian and a Brazilian girl) at the public viewing area under the Manhattan Bridge in Brooklyn and was on the verge of a nervous breakdown throughout the entire game. At some point, I even lost all faith and was close to tears. (Don’t you love the dramatic of soccer?!). But then the soccer gods did hear my prayers and helped the German team beat Argentina in the final. I can’t even begin to describe how happy this made me – it was an amazing World Cup and I feel like New York was a great place to be in for it. After watching (too) many of 64 fantastic games in the last 31 days, I will probably get overwhelmed with all the free time I now have!

Other than enjoying the last few soccer games last week, I also moved homes and am now dog sitting for an adorable doggie in Brooklyn right next to Prospect Park, Brooklyn’s answer to Central Park, which I’ve been exploring on my morning runs. I also went there for a picnic with some friends during the free Philharmonic in the Park show – after the beautiful opera in Brooklyn Park the second amazing musical performance under the stars. I love summer in New York!

I had actually planned to return to Germany after 4th July weekend, but obviously that didn’t happen.. I am still in New York – with no plans to leave anytime soon! I thought I’d be spending the summer in Berlin but I am having too much of a good time here to head back to Europe – where they didn’t even have much of a summer so far. I am in the process of planning my next travels though and will write a detailed update on the state of my life, mind and heart shortly.

Didn't watch the game but Congrats on the win :) Sounds like a fun group of people!

Thanks, Tanya! Yes, a great bunch of people - I am lucky that I made so many good friends in NYC!!

Congrats on the win! I'm not into soccer but I could imagine the atmosphere would have been electric, watching it with a big group of people. Looking forward to hearing about your future travel plans :)

I have to admit that it makes a big difference if you watch the game in a big group or by yourself at home. A bar full of cheering fans are half the fun of it - or as many as 30,000, like at the public viewing events in Germany. Trust me, you'd be hooked quickly ;-)

Congrats! It was an insane game. Everyone in Colombia was rooting for Germany :)

Oh, that makes me like Colombia even more !! Had a similar experience in Mexico in 2010. The Mexicans love our team! :)