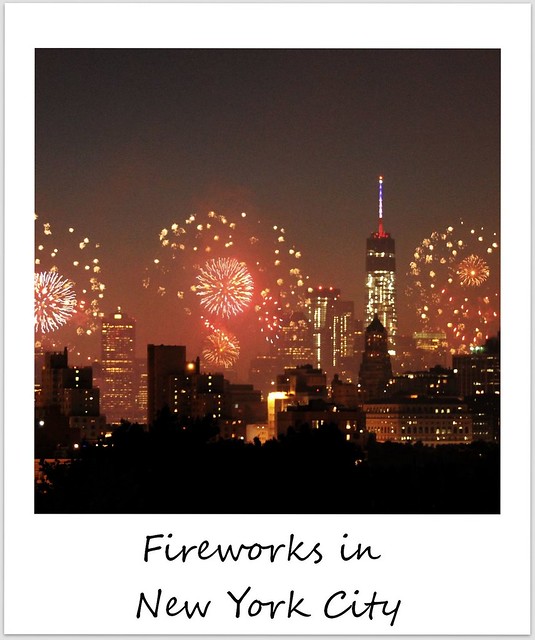 I have to apologize for the bad quality of this week’s Polaroid, but the 4th July fireworks on Friday were without a doubt the highlight of my week. Not only the fireworks – my first 4th July in New York City was overall just perfect! It started with Germany winning against France in the soccer World Cup and consequently advancing to the semi-finals (fingers crossed for Tuesday’s match!), followed by another great soccer game (Brazil!) and finally a fabulous BBQ on a rooftop terrace in Brooklyn. I don’t think I’ve ever experienced a typical American Barbeque like that – there was even a star spangled banner cake in honor of America’s birthday!

From the terrace, we had perfect vistas of the grand Macy’s 4th July firework show – the first time that they’ve had them over the East River (instead of the Hudson River, facing New Jersey) since 2008. During the 25-minute spectacle, fireworks flew from barges on the river as well as the Brooklyn Bridge – a breathtaking sight. This was only my third ever 4th July Holiday in the US, and definitely the best one yet.

Other highlights this week included more soccer (this World Cup thing is actually pretty time and nerve consuming – luckily it’s coming to an end), and several beautiful summer days exploring Bushwick, the neighborhood I had moved to recently (and can’t wait to share more about soon!). Let’s hope next week’s highlight will be Germany winning the World Cup on Sunday.

American readers – where did you spend the Holiday weekend? Everybody else in the world – which team are you rooting for? 🙂

Polaroid of the week: We Are World Champions! - GlobetrotterGirls

[…] was close to tears. (Don’t you love the dramatic of soccer?!). But then the soccer gods did hear my prayers and helped the German team beat Argentina in the final. I can’t even begin to describe how happy […]

[…] and the eccentric Mermaid Parade to al fresco opera and cinema events and an unforgettable 4th July rooftop BBQ, I’ve barely had a minute to relax. There’s more going on in the summer here than I […]

Polaroid of the week: We Are World Champions! | GlobetrotterGirls

[…] was close to tears. (Don’t you love the dramatic of soccer?!). But then the soccer gods did hear my prayers and helped the German team beat Argentina in the final. I can’t even begin to describe how happy […]

Great photo!! I love fireworks. And I really love the 4th of July. I spent this 4th of July in Cartagena, Colombia, which was absolutely wonderful. I watched Colombia take on Brazil in the World Cup match. As you know, Colombia lost but it was still an amazingly fun day. And I was so happy to be here for it :)

Thanks, Justine! I love watching soccer matches in soccer-crazy countries!! Especially the World Cup :) In 2010 we were lucky enough to be in Mexico City where they had a giant public viewing area right on the Zocalo.. amazing. I am stoked for the final on Sunday :D Heading over to your site now to read your article about Columbia during the World Cup :D