Colombia by on 41 comments 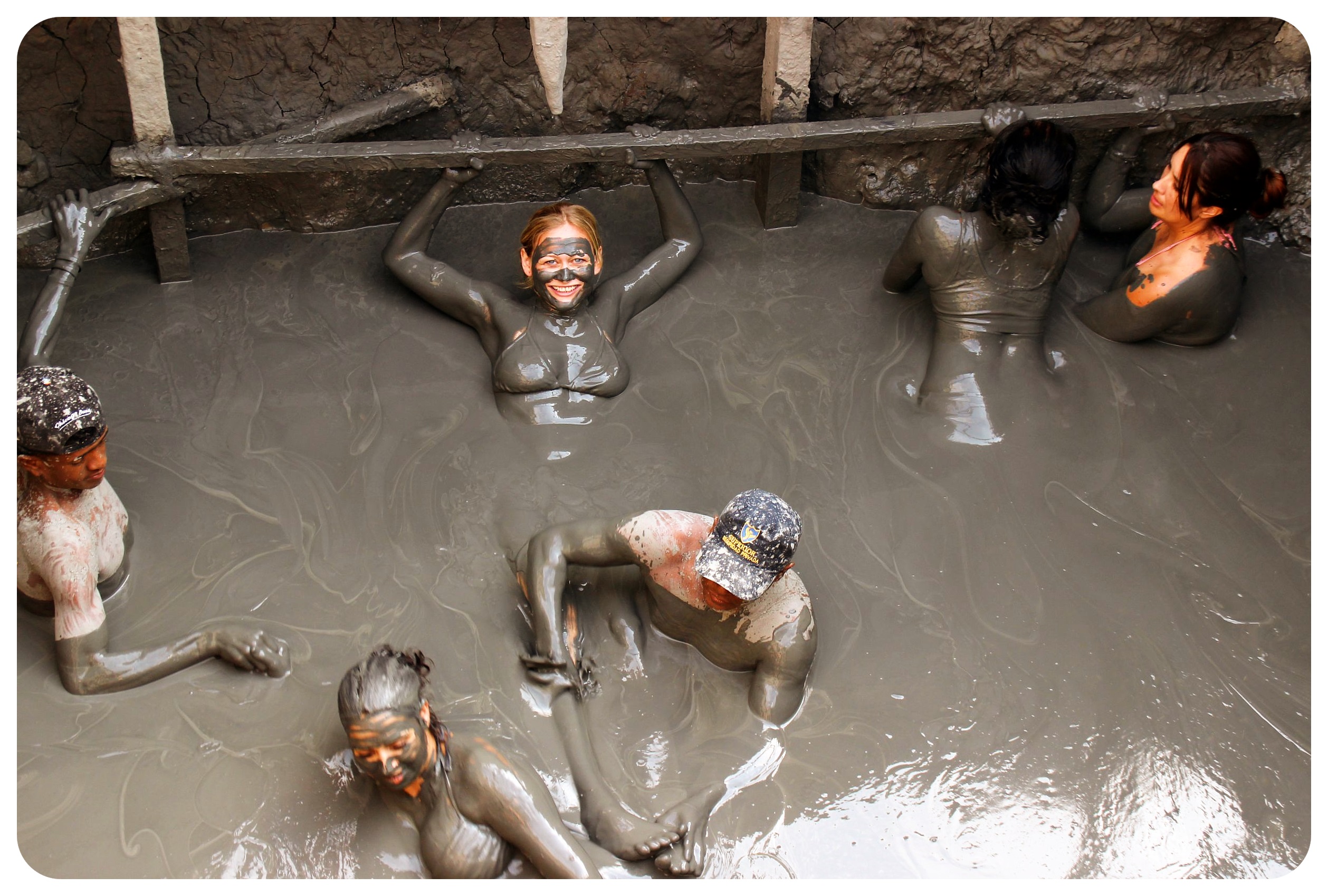 If you find yourself in Cartagena, chances are that you’ll come across posters advertising the Totumo Mud Volcano. It’s sort of a rite of passage in Cartagena – if you come here, you’ll visit the volcano. So obviously, I signed up for a tour, not sure if it would be fun to take a mud bath with a bunch of strangers or not.. But what could I do? The Cartagena rite of passage, you know? 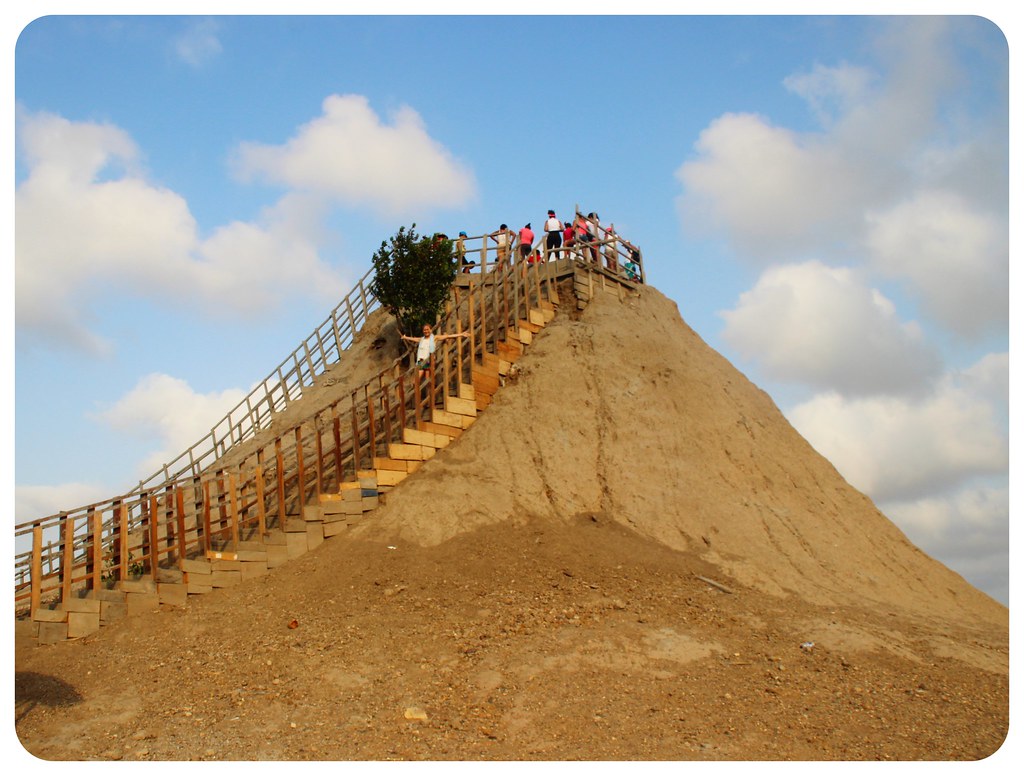 And so I found myself in a minivan with 16 strangers on a sunny Sunday afternoon, ready to join the thousands before me, taking a mud bath in a volcano. Once you get there though, you quickly realize that this isn’t really a volcano filled with mud, it’s more like an upside down cone filled with mud.

What to Know Before Visiting Totumo Mud Volcano

There were other things that nobody told me before I headed to the Totumo mud volcano, things I would have been glad to know before I go, which is why I’m going to share six of them with you right here: 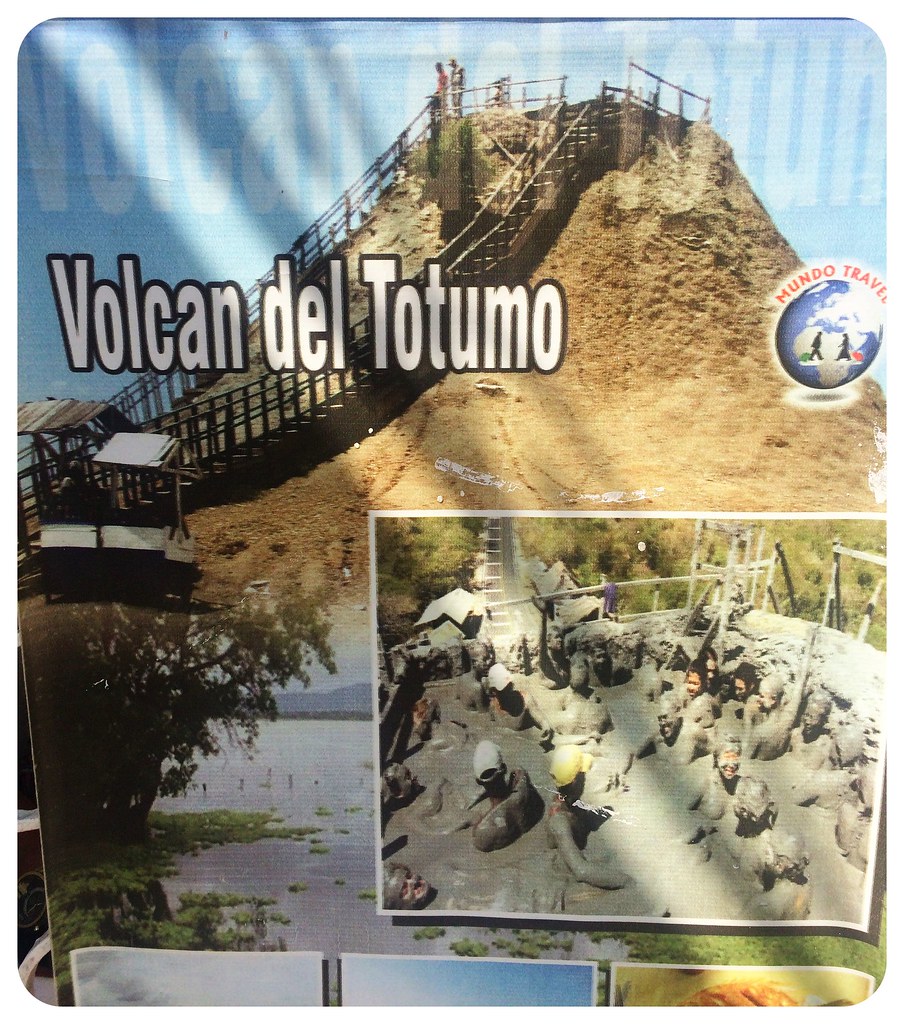 1. You’ll get up close and personal with strangers

The Totumo mud volcano is actually closer to a puddle of mud than anything else, but picture a really really deep one, maybe even bottomless. If you take a tour to Totumo, like most people do, because it’s the cheapest and easiest way from Cartagena, you and 16 fellow mud enthusiasts will change into their swimsuits and head up the ‘volcano’. One by one, you’ll descend into the mud, slowly going down a ladder from the top, because the mud is much lower than shown in the pretty advertising posters around town. The mud used to reach up to the top of the ‘volcano’, and I’m not sure where it all went but you have to descend a good 20-16 feet (6-8 meters) now to get into the creamy, smelly mud. Considering that there are several guys selling bottles of this good ol’ mud at the bottom of the volcano, they might have sold all the mud that used to fill up the volcano, but who knows. Anyway, once you’re in the mud, be prepared to be groped by some Colombian dudes who are spending all day waiting inside this mud hole, eager to massage white people for a small fee (COP4,000).

One by one, the rest of your group will join you, or maybe you are one of the lucky ones last in line, looking down skeptically on everyone floating in the mud, wondering if you really want to get in there. But as the mud hole fills up, you’ll quickly befriend everybody else because you all realize what a ridiculous situation you are in, and the fuller it gets, the closer you’ll get to everyone. I felt quite a few hairy legs, boobs, feet and other body parts while I was floating around, thinking to myself how weird it was that I wasn’t sinking.

Pro Tip: Don’t be one of the fools who dip their entire head into the mud – there’s nothing to clean the mud off your eyes, and your hands are muddy, too! 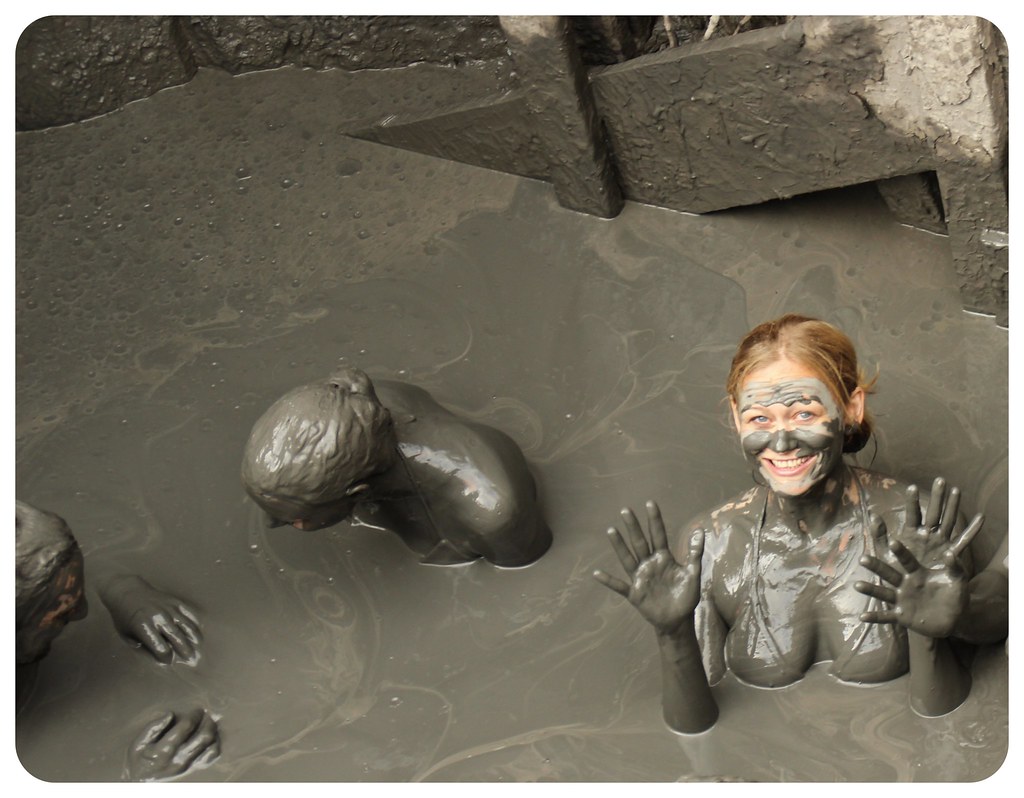 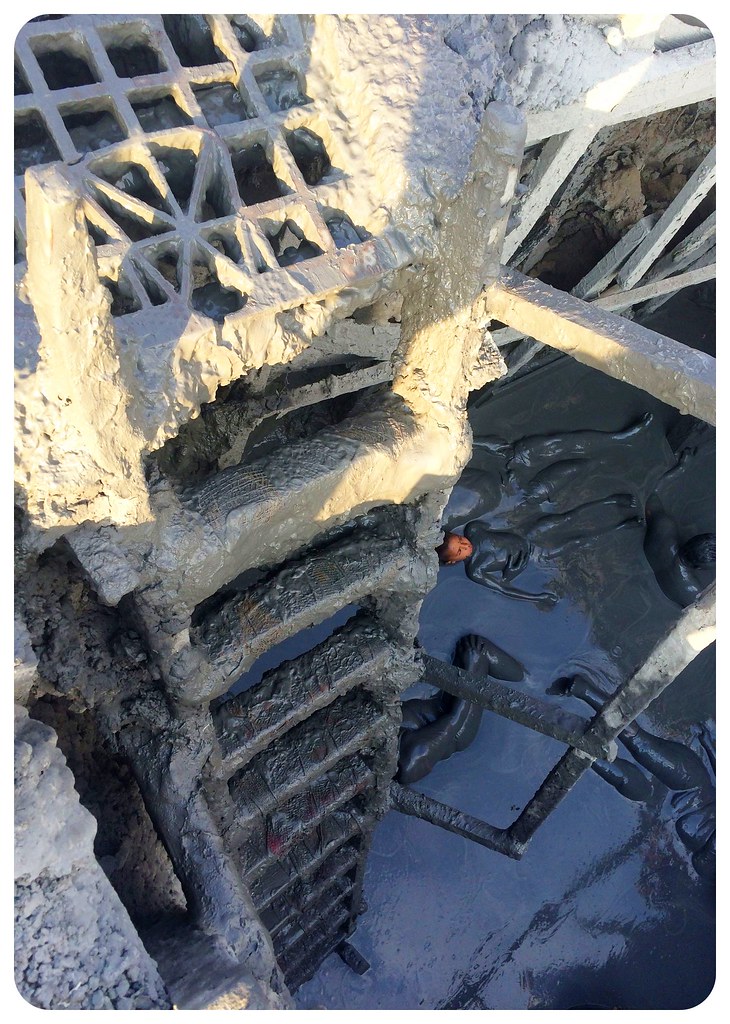 Once you decide that you’ve had enough, you will try to make your way out of the mud, which now that the mud hole is quite deep means relying on a rickety old wooden ladder, which is extremely slippery, thanks to all the mud monsters who’ve made their way out of there before you. So hold onto the rails for your dear life – literally! The story of how you conquered a mud volcano is a good one, but you have to make it out alive to live to tell it.

When people wonder if it is safe to travel in Colombia, I usually tell them that my visit to Totumo mud volcano was one of the scariest moments of my trip to Colombia.

3. Prepare to be studied and stared at 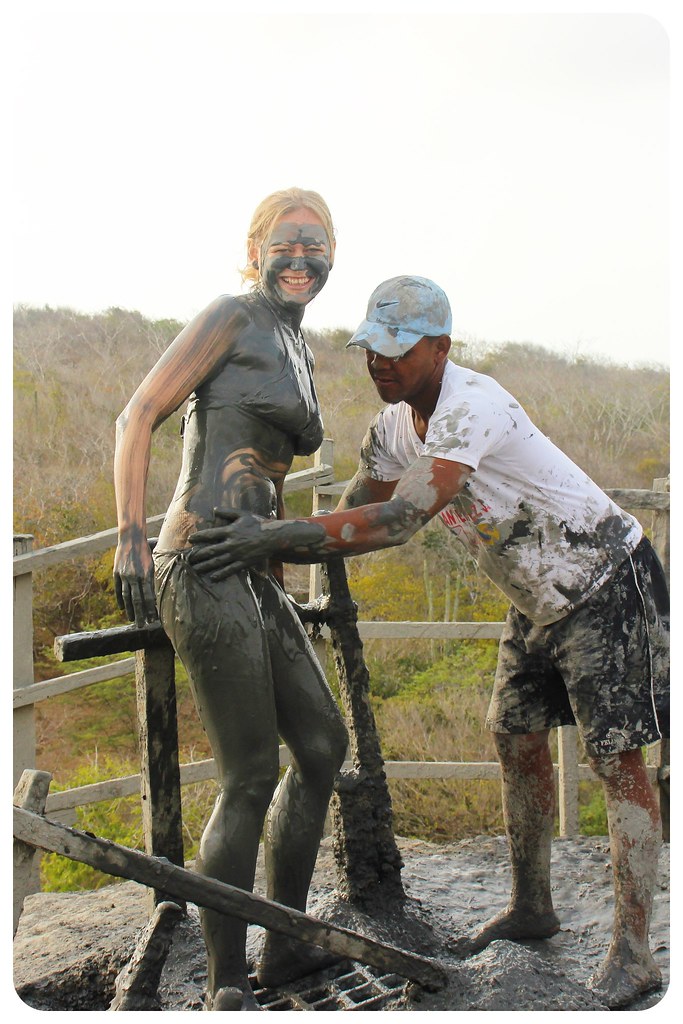 One thing that was interesting was that during my visit, several tour buses pulled up. At first I thought: wow, it’ll take forever for them all to take a mud bath, because the hole doesn’t fit a 48 people bus load, and a minivan load of 17 already takes a while to get in. But then I realized that they don’t come to take a mud bath. Instead, the Latinos walk up to the rim, stare at the gringos (including you!), snap your picture, and then walk down again after pointing at you and chatting about you with their fellow observers. They’re probably thinking: Why the hell do these gringos pay so much money to get into this stinky puddle, ruin their swimsuits in mud and get their hair all muddy? It feels particularly humiliating when you’re the one who is in the process of emerging from the mud, looking like a mud monster, and have a guy grope you to get some of the mud off you with his hands before you make your way down to the cleaning area… Yes, cleaning area.

Even though there is a huge lake next to the Totumo mud volcano, you can’t just jump in and wash the mud off – it is too shallow, and so the business-savvy Colombians who live around here set up a few giant jars near the lake which some guys keep filling with bucket loads of green water that they get out of the lake.

When you arrive there, a lady will grab you and start washing the mud off you with the help of a little bowl, in which she puts the green lake water from the big jar. These ladies are also not afraid to touch your private parts, and I’m sure the lady who washed me enjoyed my boobs, that’s how intensely she was rubbing them. They’re also not afraid to just take your swimsuit off if they feel there’s a lot of mud in there – my friend found herself without her bikini top within a couple of minutes of getting to the cleaning area, while another lady tried to pull down her pants. That’s the moment when you get really close with all of your new mud friends – you’ll see much more of them than you expected. 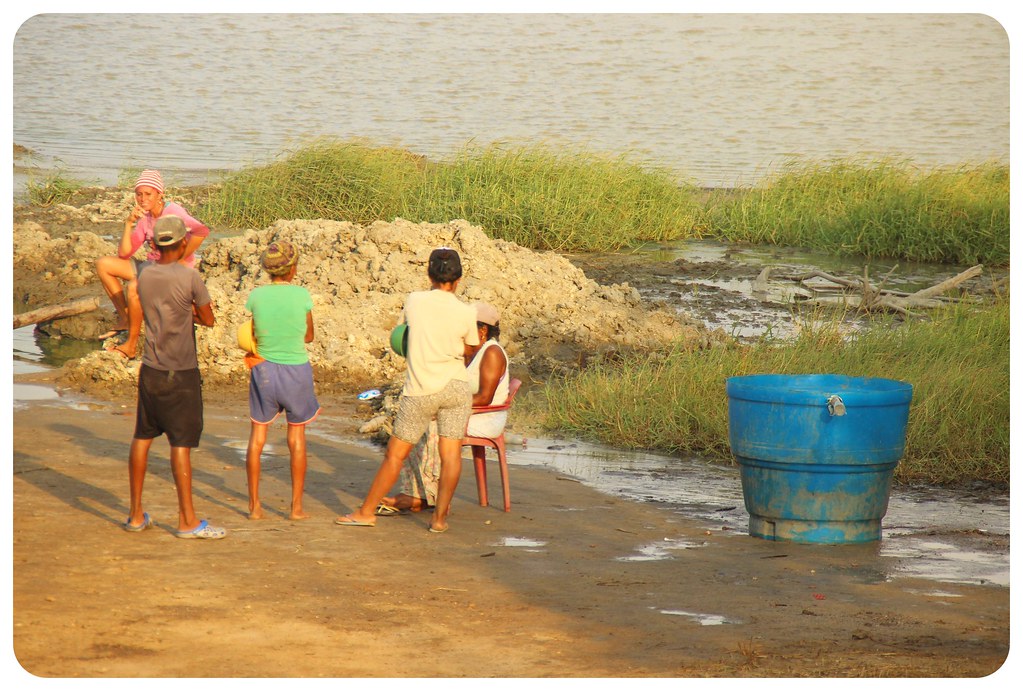 Once you’re released, you go back to your belongings which are stored in a little storage room while you frolic in the mud, and suddenly, everyone who has helped you with something, appears and wants to be tipped. The guy who held your camera? $1. The lady who washed you? $1. The kid who watched your shoes? $1. The guy who massaged you? $1 (amazingly cheap massage, btw!). It was incredible how everyone who did something for you finds you again afterwards and makes sure he or she gets paid. In all the tipping mania I even tipped a kid who didn’t do anything other than holding his hand open! ‘But he didn’t do anything for us‘, my friend pointed out. ‘Oh.. Well he just made 50 cents by simply holding his hand open.‘ 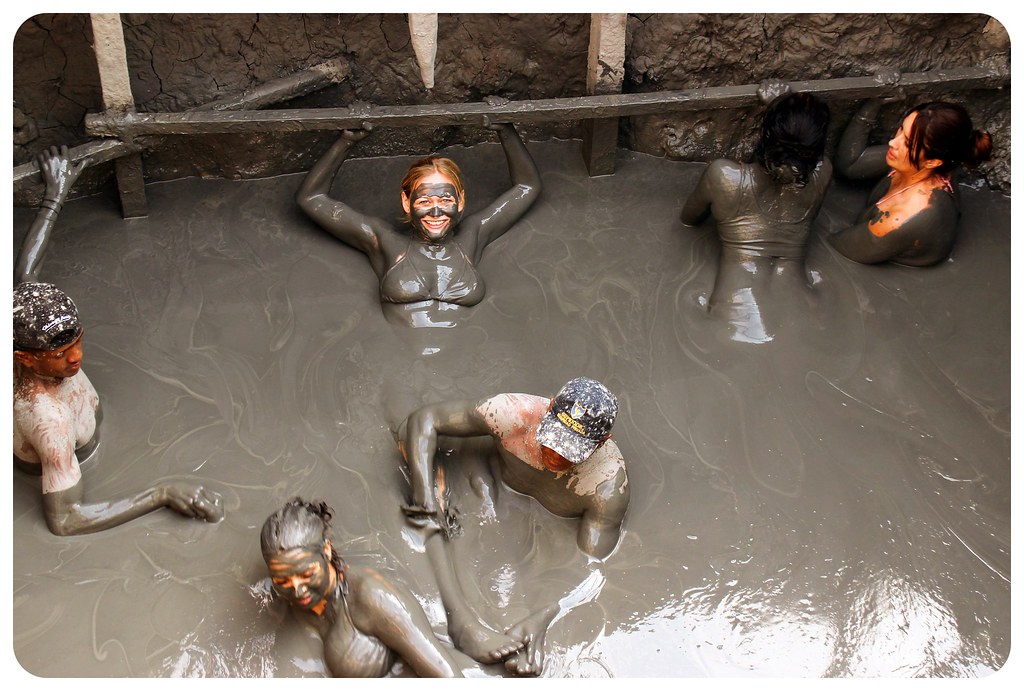 When you’re finally back in the van, you’ll be able to enjoy the sulfur smell for another hour (at least, depending on traffic in Cartagena) because you think they cleaned you, but as a matter of fact you’ll still find mud in the most random body parts for days (if you’re one of the lucky ones whose accommodation in Cartagena has hot water: this is when you’ll truly appreciate it!)

In total, you’ll spend more time in the van than in the mud, by the way. Our van showed up half an hour late and then picked up other mud-hungry tourists around town for another hour (!) before we were finally on the way. The ride takes about an hour once you leave the city and an hour back. You’ll spend about an hour at the Totumo mud volcano, including cleaning, changing and a quick beer to get rid of the taste of mud in your mouth. There are two tours to the volcano every day; one leaves in the morning, and one leaves in the afternoon. 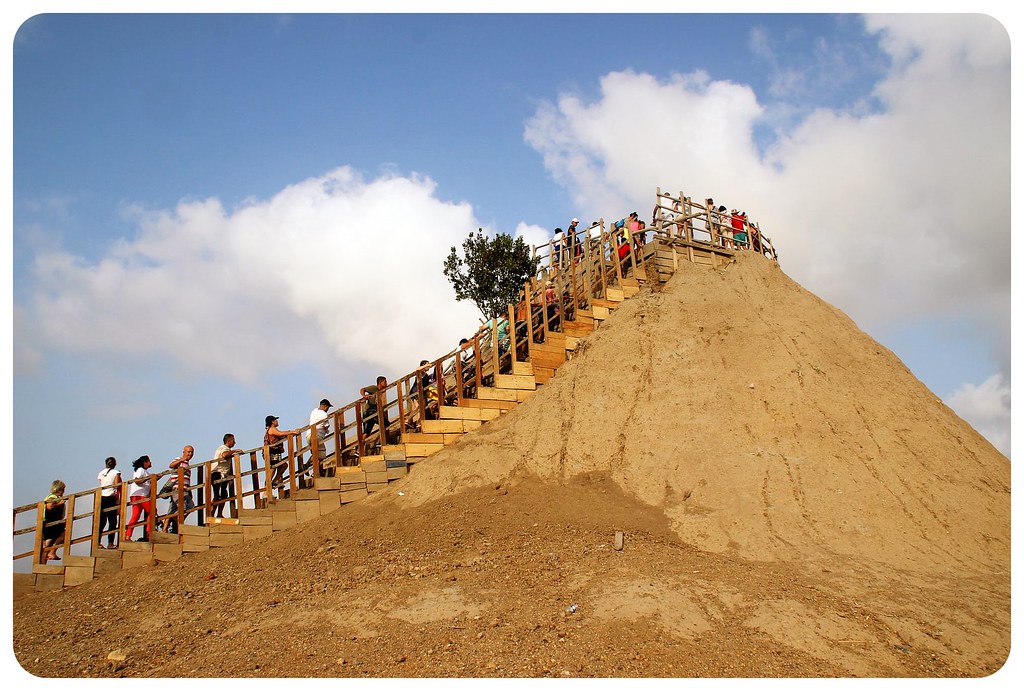 How Much Does Totumo Cost: 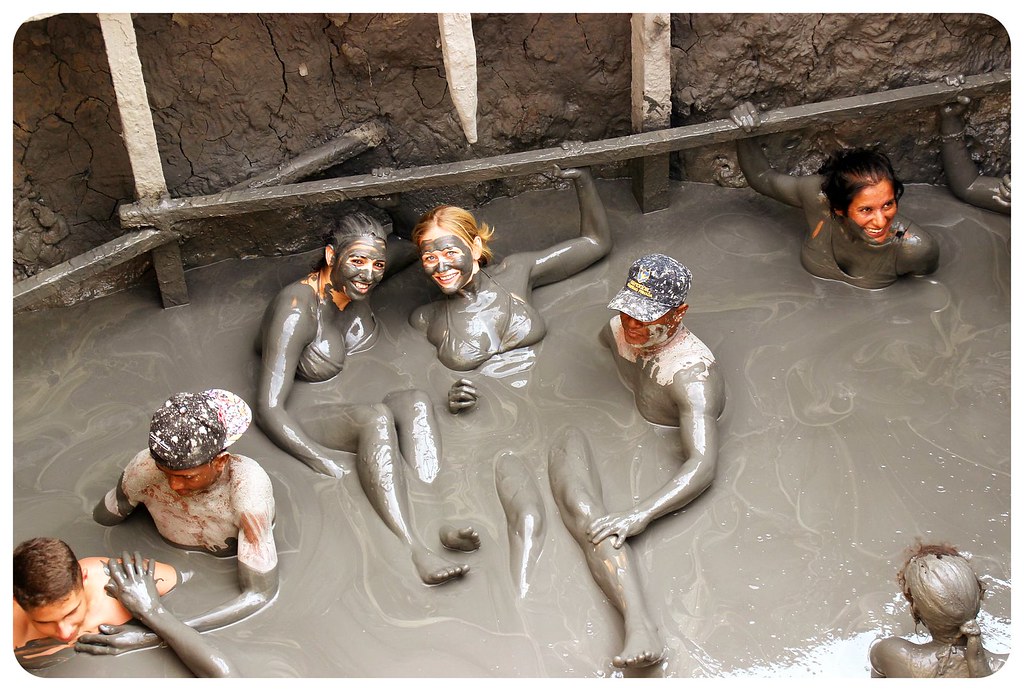 Is there another way to get to the Totumo mud volcano?

Yes, you can take a cab to the volcano if you don’t like crowds. If you time it right (early afternoon would be best, I think, before the arrival of the afternoon group), you’ll most likely have the volcano all to yourself. It’s worth it if you are a group of four people; expect to pay at least COP200,000 for the cab, including return to Cartagena and the driver waiting for you while you splash around in the mud.

Are there different tour companies offering this tour?

At the moment, there’s only one tour company who runs this tour if you book it in Cartagena: Ruta ecologica. You can book the trip from most hotels and hostels and your offices around town. Pickup is usually where you book it. The price (COP45,000/ around US$14) includes transportation and a snack of fresh watermelon after the mud bath. The company has a little area with changing rooms, toilets and showers (don’t expect more than a trickle) right next to the volcano, complete with lockers where you can lock up your valuables. GetYourGuide started to offer a few mud volcano tours, check them out here:

Can you trust a random guide with your camera / phone?

This was my biggest concern, but their system works. Our group’s camera guy had thousands of dollars worth of camera equipment around his neck and in his fanny pack – all our phones, goPros, dSLRs and regular cameras. He’s going to snap 10 – 15 pictures of you. I took a few extra ones on my camera before we left. You have no chance but handing over your camera, by the way, if you want to eternalize the picture of your mud-covered self. 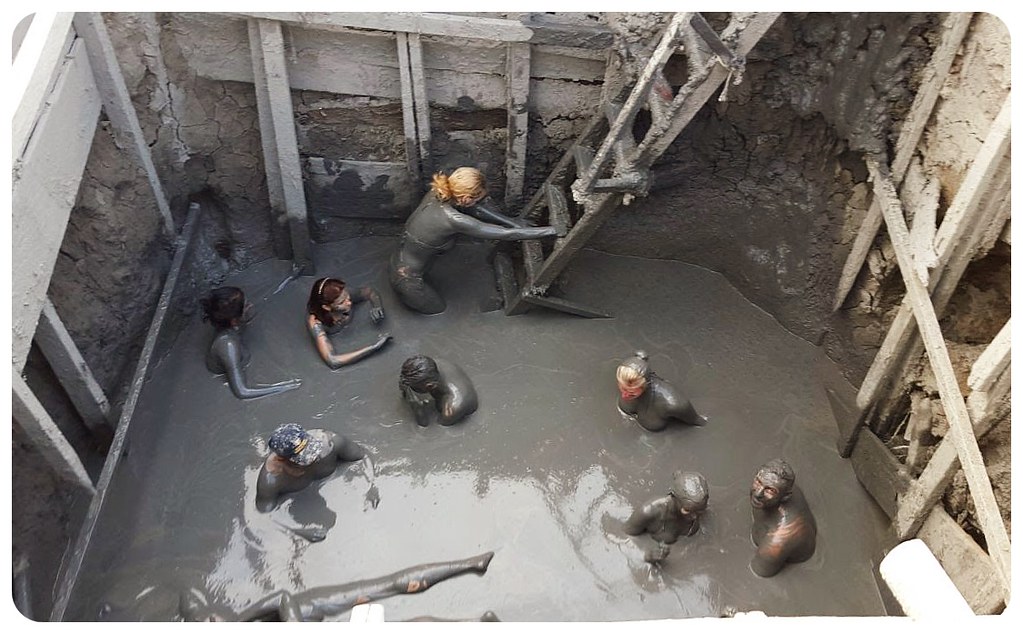 What to bring / what not to bring 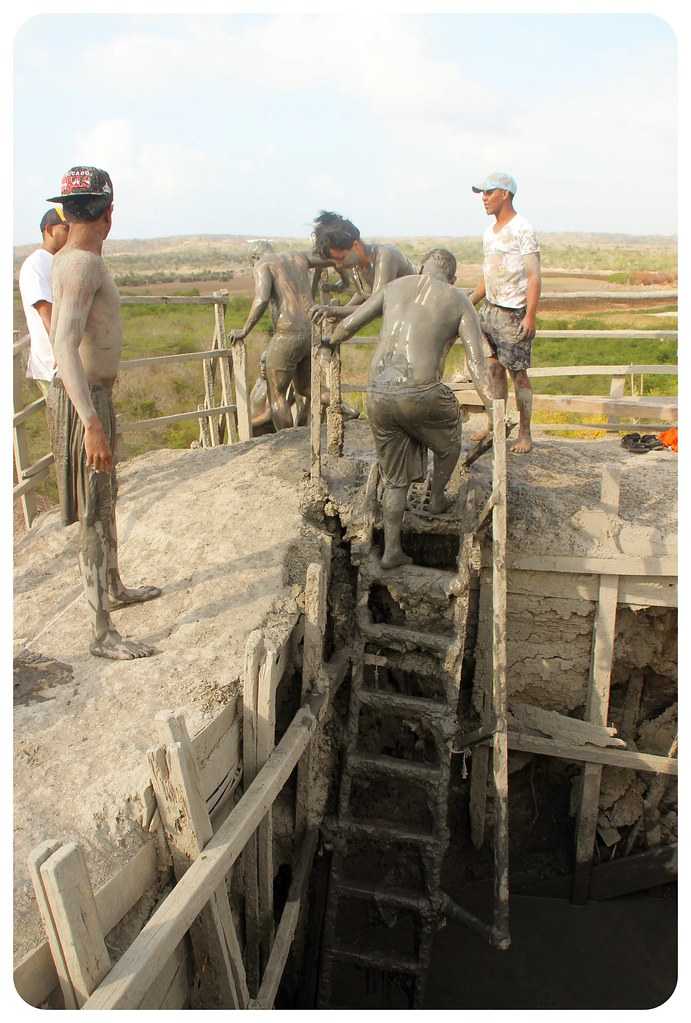 Old bikini
Bring an old bikini – unless you have the chance to wash it the same day. The mud turned out to be pretty persistent and I’m glad I wasn’t wearing my best swimsuit.

Water & Sunscreen
The volcano itself doesn’t offer any shade, so make sure you bring sunscreen and water to stay hydrated. There are some kiosks and small roadside restaurants around the volcano where you can buy snacks and soft drinks or beers after the experience.

Money
Bring enough cash (and small change) to cover all your tips, but I wouldn’t bring too much cash or any valuables that you don’t need (credit cards, jewelry, etc). 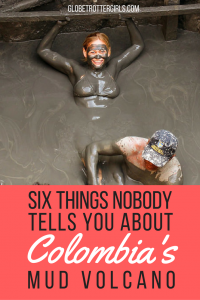