Imagine you have 365 days a year to travel, to go anywhere you want to…if you were to go back to one place three times in five months, you must really love it, right? That’s exactly what happened to me. The love grew slowly, but I realized just how much I love Chiang Mai, Thailand after visiting it three times during our stint in South East Asia.

My first visit to the northern Thai city was for the breathtaking Loy Krathong lantern festival. I came back after traveling around Laos for a few weeks and ended up spending a month in town. When I left, I thought it was a final goodbye, but ended up returning a month later again, for a third time, this time after being offered a month-long housesit in Chiang Mai. 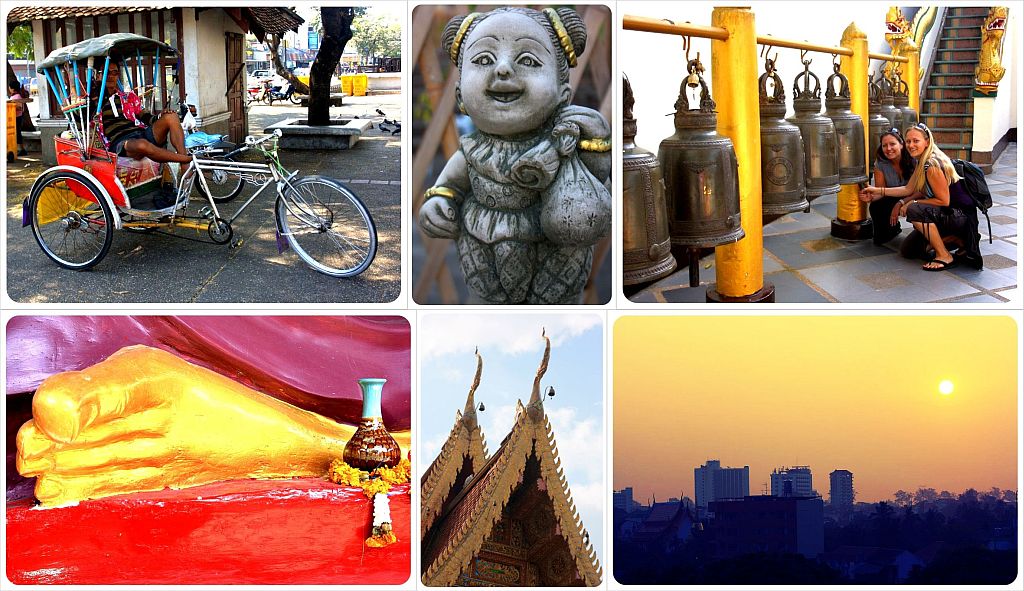 Although Chiang Mai doesn’t impress the way that cities like New York or Singapore might, I find the city to be an excellent place to visit, or stay in longer term. My love of the city was a slow burn, one that took awhile but I am deeply committed to returning to again one day. (Spoiler alert: I have in fact returned to Chiang Mai since I first published this article!). I’ve put together a list of all the things I love about Chiang Mai, hoping to entice you to check it out for yourself:

The size of the city

Chiang Mai is a comfortable size for a city, large enough to stay interesting but small enough not to get lost or worry about having a car or even a scooter. We rented bicycles for a month and we were able to cycle from one end of town to the other in under one hour. For those who live more centrally, you can walk almost anywhere within 30 minutes. Although over one million people live and work in the greater Chiang Mai area, parts of the city are very spread out so that it never feels crowded at all. 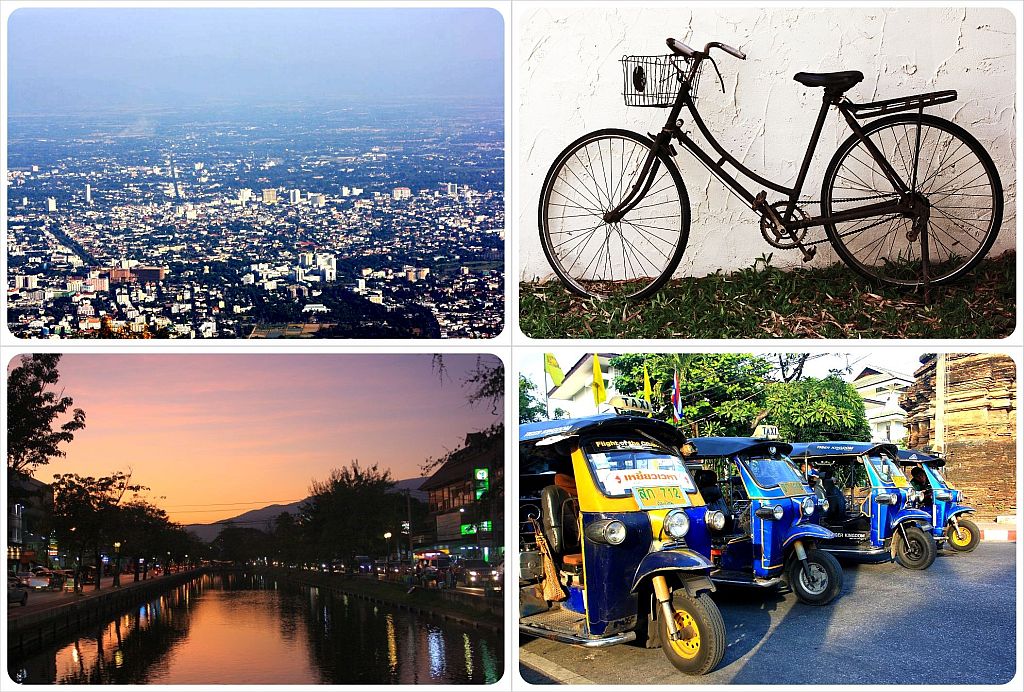 Thai people love coffee, and its preparation has become a bit of an art form in Chiang Mai. There are more cafes here than any other city we visited in South East Asia. Some are tiny, no more than two tables, others are trendy art cafes, plus there are large coffee shop chains as well. One of the best (read: strongest) takeaway coffees we ever had came out of a coffee truck, which had rows of flowers on a makeshift bar and a full coffee menu. One thing is certain – they all own and operate some sort of state of the art coffee machine, and most have wi-fi, which is great for the hundreds of people in Chiang Mai like us working remotely. This is definitely one of the things I love about Chiang Mai the most. Among my favorite cafes are: Ristr8to, Old Chiang Mai Café, Coffee Zebra, Akha Ama Café, and Doi Chaang. If you’re a coffee-holic like we are, you might also enjoy this list of 30 cafes to visit in Chiang Mai. 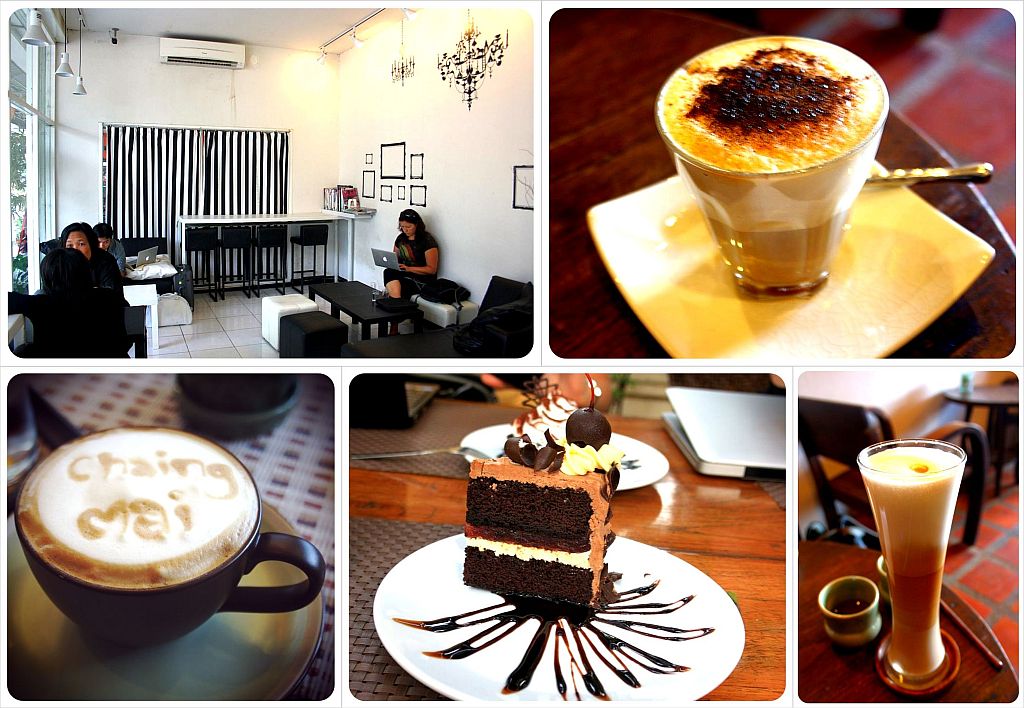 Chiang Mai is one of the most vegetarian-friendly cities in all of Thailand – we counted over thirty vegetarian restaurants. Despite making a valient effort to sample them all, there were still some that escaped us – until next time. Our friends Erin and Simon did a better job here and covered the best vegetarian restaurants in Chiang Mai. Some of our favorites are: PunPun, Juicy4U, AUM, Dada Kafe and Khun Churn for the vegetarian lunch buffet. 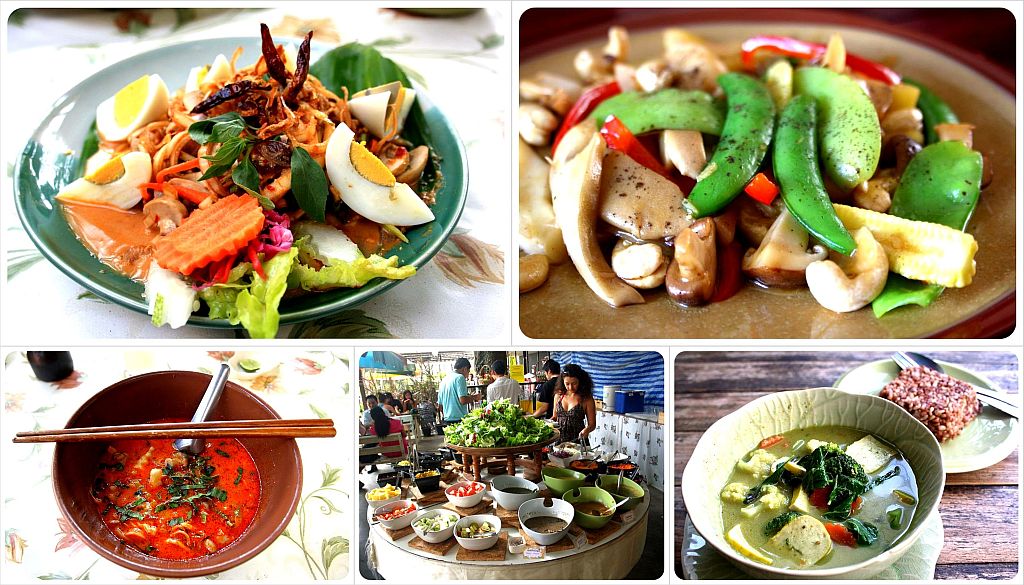 ..and all the other food!

Chiang Mai is a food lover’s paradise! Not only can you get some of the best Thai food in the country here, but because this is a city of over one million people, its easy to get your hands on a perfectly prepared thin-crust Italian pizza, a good English breakfast, Spanish Tapas, Indian curry, Middle Eastern falafel, German sausages or Mexican quesadillas. There even is a cake buffet – can it get any better?! Some of our (non-Thai) favorites are: Bake n bite, iBerry, Beetroot Stories, Salsa Kitchen and La Lanterna di Genova. 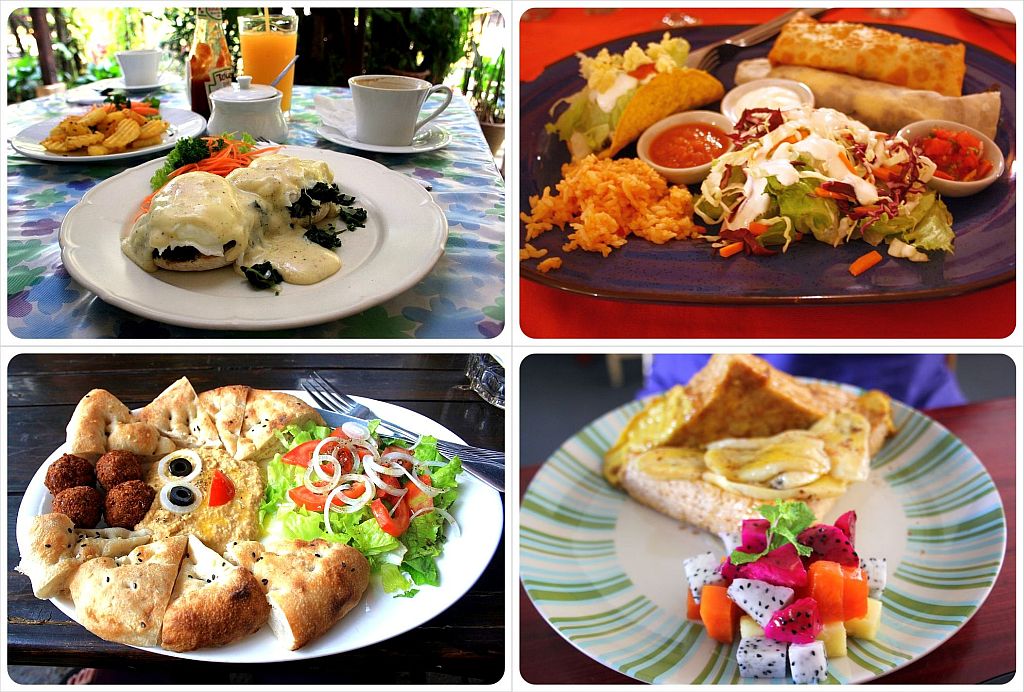 I have to admit that I am a huge temple geek, and I can spend hours walking around the ornate Buddhist temples all over Chiang Mai. Given that there are over 300 temples, there are always new temples to discover when cycling around town. The big golden Buddha statues or crumbling ancient stupas never cease to amaze me. Among our favorite temples are Wat San Duok, Wat Chiang Man, Wat Lok Moli, Wat Chedi Luang, Wat Montien and Doi Suthep. 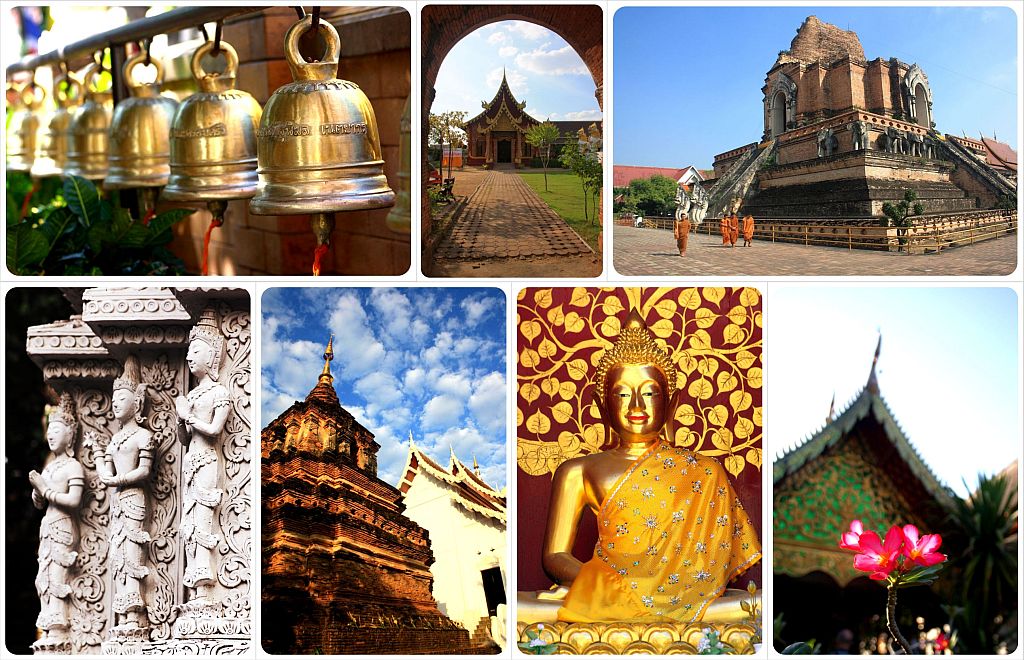 With the temples come the monks, and there are hundreds of Buddhist monks in Chiang Mai. In 2011, there was even one weekend with a lot more than that, when over 12,000 monks gathered in Chiang Mai. The really fun part is seeing the monks hanging off the back of motobikes, riding public transportation, topping up their cell phone credit, all with their bald heads, orange robes and peaceful smiles. When you do meet them in a temple, they are usually eager to practice their English and often strike up conversations with foreigners, making it easy to feel connected to this aspect of Thai life. 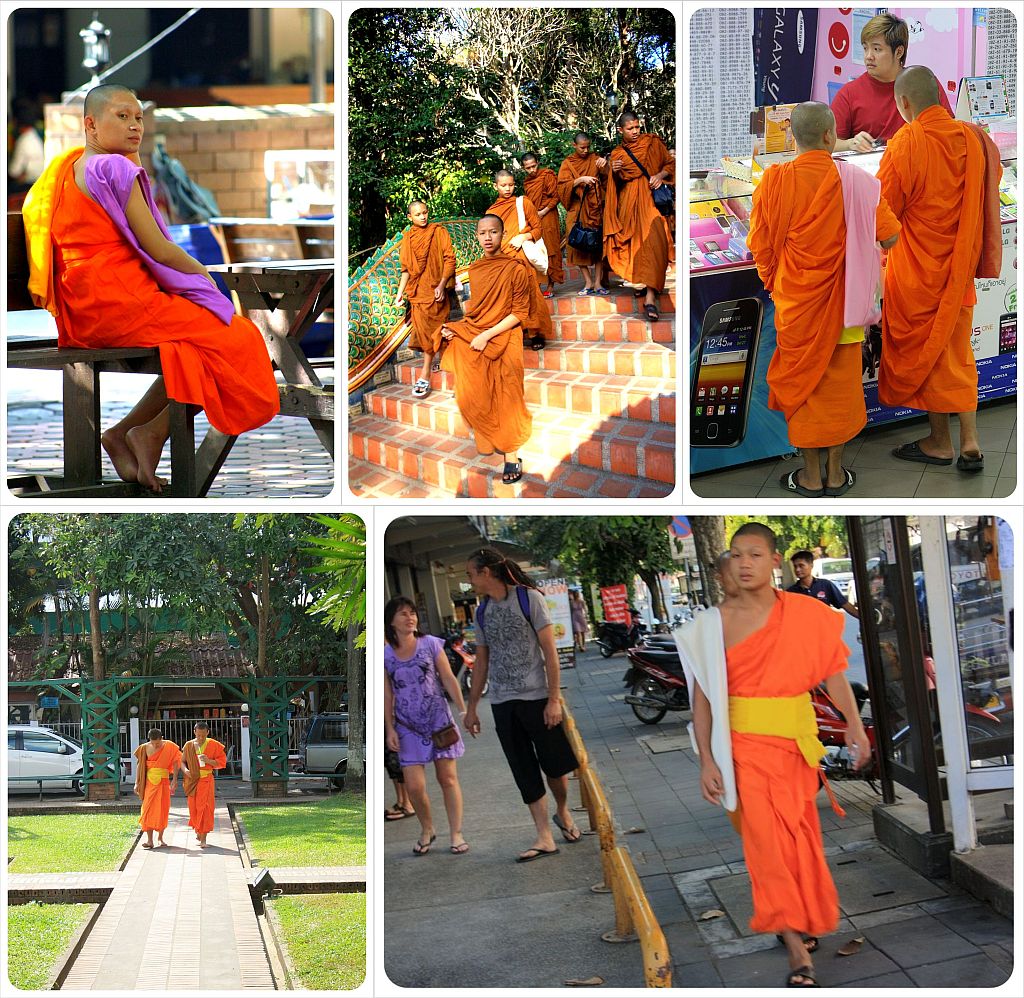 We can pick up a plateful of steaming hot Pad Thai for under $1 next to a stand selling T-Shirts with creative graphic designs, or walk down a few minutes for fresh fruit smoothies and a look at wood carvings or other traditional handicrafts. Chiang Mai simply has great markets, like the Saturday Night Walking Street and the huge Sunday Night Market (both admittedly very crowded after 6:30pm). What we love most, aside from the amazing street food, is that what is on sale isn’t only tourist trinkets. Thais also flock to these stands to pick up any number of creative items from clothes, jewelry and toys to paintings and furniture. One night, we also stumbled across an out of-the-way hip Thai market that reminded us a lot of the East London markets we love so much, where primarily Thai hipsters shopped for cool clothes, second-hand shoes and other accessories. 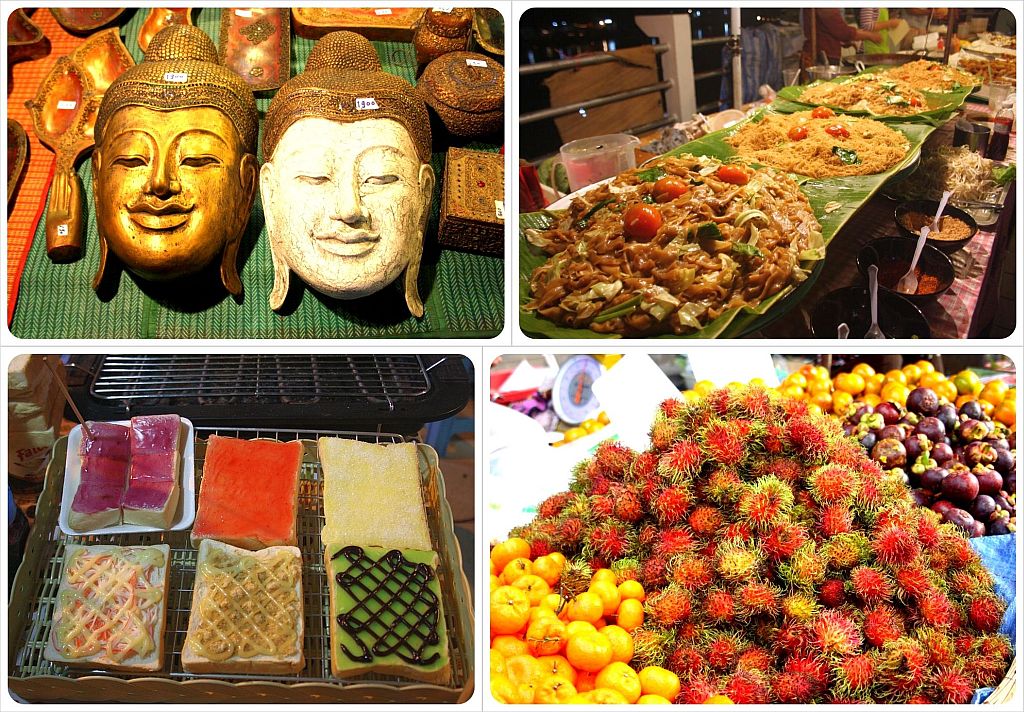 Speaking of hipsters – Chiang Mai is a university town stuffed with young, trendy Thais hanging out everywhere, but especially in the area around Nimmanhaemin Road with its cool bars and cafes. The great thing about that is that unlike in many cities in the West, the Thai hipsters might be on the cutting edge, but they are still polite and low-key, so its fun to all hang out together. If looking to escape the Western tourists in the Old Town,we really recommend staying and hanging out over near Nimmanhaemin for an authentically Thai feel.

We also loved the creative vibe that you feel in many of the neighborhoods, starting with cool street art to innovative shop design or brilliant art exhibits in one of the many galleries located throughout the city. 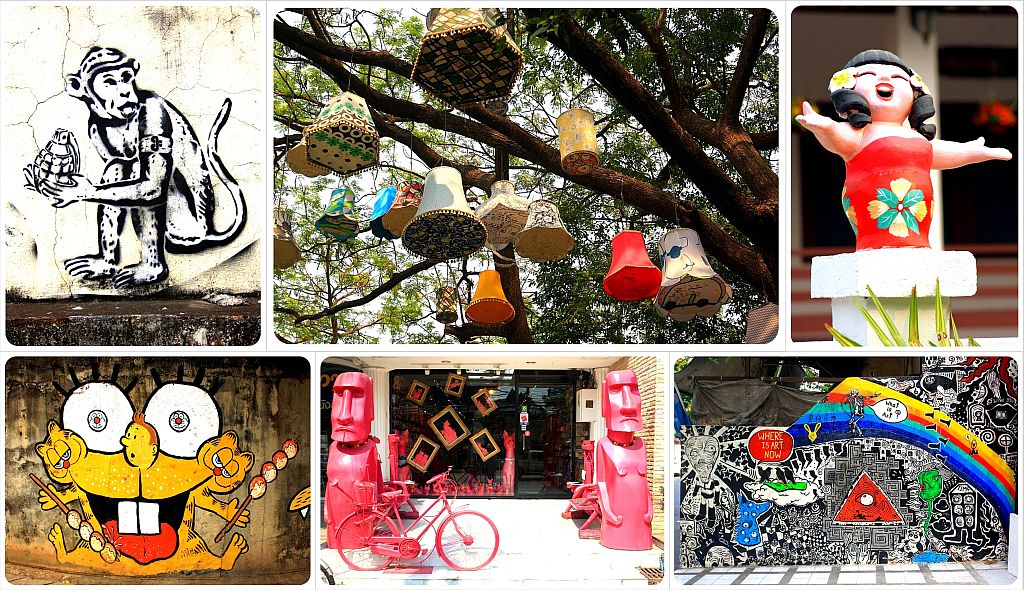 Chiang Mai has so many festivals – almost every month there is a big parade or other festival. Some top ones include the Umbrella Festival in January, Flower Festival in February, Songkran in April, Visakha Bucha in May, Yi Peng and Loi Kratong in November and the Rose Festival in December – there is always something to celebrate! 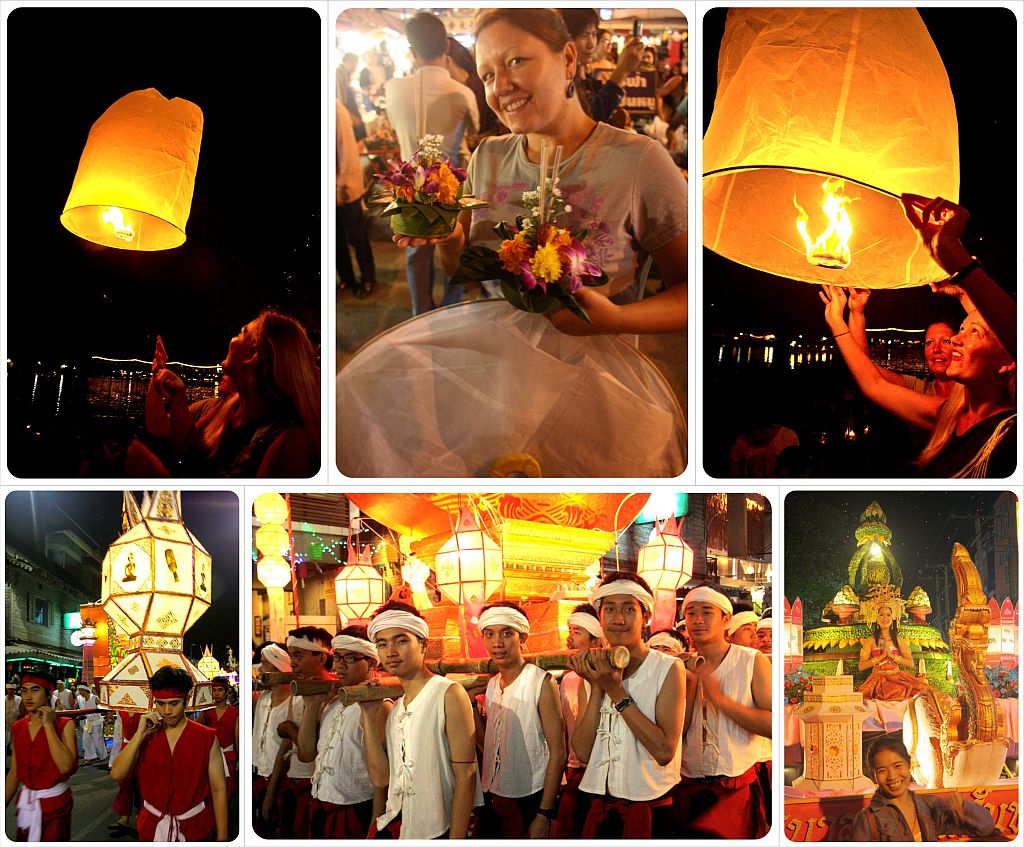 The cost of living in Chiang Mai

One thing that draws expats, retirees, and visitors alike to Chiang Mai is how cheap it is to live there. You can find a small studio apartment for $150 – $200 a month, or even rent an entire house for $300 a month outside the city center. Street food is usually less than $1, and if you sit down in a local Thai restaurant you will usually pay between $1 and $2 for a meal. In the more touristy areas, meals in a restaurant are between $2 and $4, and even the more expensive Western food is never more than $5 to $7. Seeing a movie in the theater is around $3.50, you can get (really good) massages for $4 per hour and public transportation within the city limits is $0.65. A trip to the dentist office (excellent facilities) for a teeth cleaning is under $30 and other hospital check-ups are equally as cheap. Living life to the fullest, doing as you please, it’s hard to overspend in Chiang Mai. Read these articles by fellow bloggers JetSet Citizen, A Little Adrift, Stop Having a Boring Life and Nomadic Notes for coverage on living in Chiang Mai for around $500 per month. 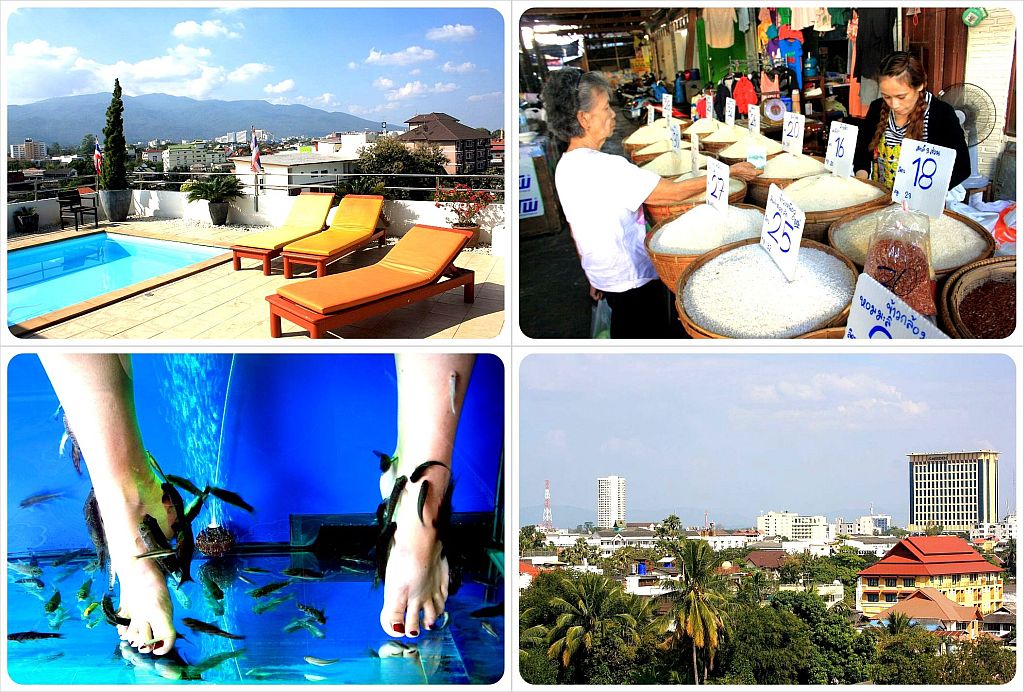 It’s not all roses

Of course it is not all sunshine and roses in Chiang Mai. We have to admit that apart from the temples and the historic city wall, the architecture in the city did not blow us away – there are mostly functional concrete buildings, not the charming colonial houses that we loved in other cities in South East Asia or the colorful colonial towns of Central America. The apartment building where we spent our first month seemed to be mostly inhabited by old, single Western guys and the number of young Thai girls we’d come across in the hallway or lobby was astonishing. The historic center was a bit too touristy for our taste, filled with lots of cheap hostels and backpacker bars, and we often fantasized what Chiang Mai would be like without the high number of seedy expats and tourists. The number one factor that we didn’t like about Chiang Mai though was its location. Even though the surrounding Lanna countryside is beautiful and you can easily visit places like Chiang Rai or Pai, we missed having a beach nearby, and Chiang Mai is pretty far from everything else.

Still – all the things we love about Chiang Mai are all reasons for us to go back, and we’re already looking forward to it.

Have you been to Chiang Mai? What are the things that you love about Chiang Mai?

Polaroid of the Week: Ladyboy on stage in Chiang Mai, Thailand
Click here to cancel reply.

[…] girl friends. This is the ugly side of Chiang Mai, that I prefer to avoid. In the words of the GlobeTrotterGirls.com, “the apartment building where we spent our first month seemed to be mostly inhabited by old, […]

Indeed. Real good food in Chiang Mai. I tried the foods at night markets. They're all awesome.

Great rundown of what makes this city so great. I especially like all the temples scattered about. You never know what you'll find.

Thanks, Ryan! Your Chiang Mai posts make me want to go back so bad! Miss the pretty temples and the good food :)

We're thinking this December or January for a month, after a couple months in Hawaii. Can't wait!