Chile Polaroid of the Week by Dani on February 14, 2013 10 comments Polaroid 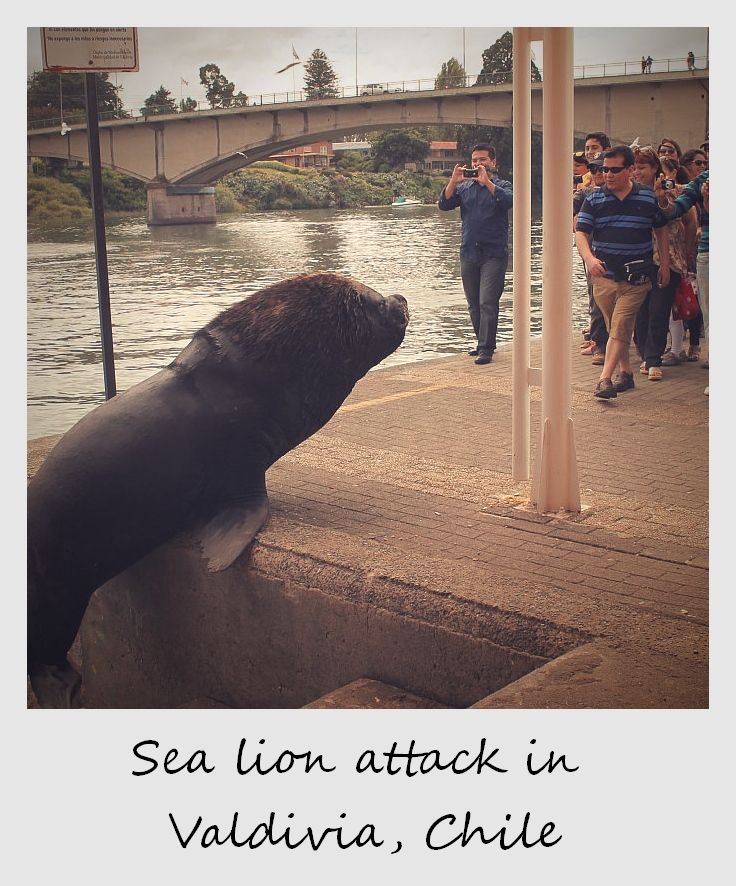 We arrived in Valdivia, a small city in Chile’s Lake District, and fell for it instantly. We had heard that Valdivia was the ‘hippest town in Southern Chile’, and after living in a chic part of Chile’s capital, Santiago, for seven weeks, we weren’t quite sure what to expect. Before moving on to Patagonia’s popular tourist meccas, we wanted to soak up a bit of an authentic Chilean city and see what the fuss about the Feria Fluvial, the city’s fish market, was all about. Valdivia is known for this small fish market right on the riverbank, and it’s no wonder why. Fishmongers display dozens of different fish and sea animals for sale on one side, while the other is packed with fresh, colorful fruit and veg stands, cheese vendors and even people selling giant bunches of seaweed.

Of course, the most entertaining aspect is the gang of sea lions hanging out in the river just behind the fish market, gobbling up all the extra fish parts the fishmongers sweep right into the water periodically throughout the day. These massive beasts lay on a wooden raft tethered about five meters from the shore, and either lay on it, play on it, swim around it, or eat fish all day long – not a bad life at all. One of the largest of the sea lions got cheeky and jumped out of the water up three meters onto the cement platform and gave onlookers a good scare at first. After the initial shock at his massive size, it seemed like all the market visitors got out their iPhones, cameras, even iPads, and snapped shots of the sea lion as he flopped his way through the fish stalls. The fish mongers didn’t seem threatened at all by his big bloody fangs, and eventually managed to lure him back into the water by dumping a bucket of fish parts into the water for him to enjoy.