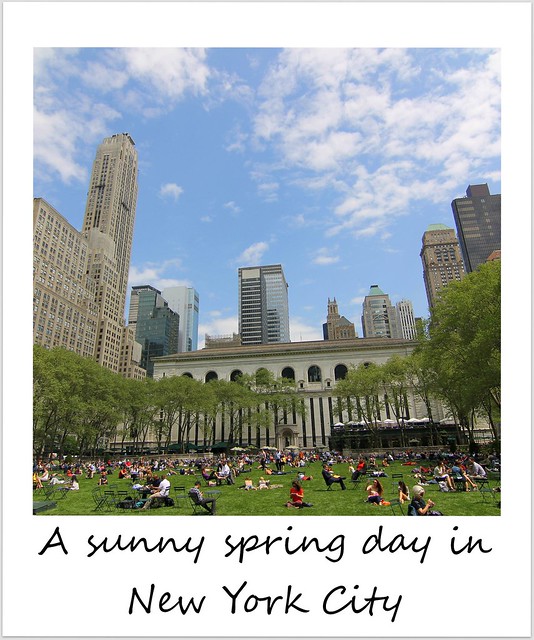 New York has been extremely good to me over the last couple of weeks. Even though I had some unexpected stress with my living situation (more on that to come), I couldn’t be happier where I am staying right now, a cozy Upper West Side apartment.

The weather has been exceptionally warm, with the second weekend in a row being so hot that I was tempted to get my bikini out and join my fellow sun seekers in the parks around the city – I had no idea that girls would lay out in their bikinis (or sometimes underwear!) anywhere you find a tiny spot of grass as soon as the thermometer shows 75°F!

There have been several days when it was hard for me to convince myself that I actually needed to work and not just go out and enjoy the glorious spring weather – the hardship of not having a boss! 😉

I have been lucky enough though to visit all my favorite parks over the past couple of weeks, including Bryant Park, pictured, Central Park (where I can’t get enough of the cherry blossoms), Brooklyn Bridge Park, the High Line and Washington Square Park, plus a few parks I hadn’t known yet, such as Astoria Park, Morningside Park and Riverside Park along the Hudson River.

This weekend, I also found some time to return to Harlem, where I hadn’t been in many years, and was surprised to see how much the neighborhood had changed since my last visit – expect a full post on Harlem soon!

Eight Things to Pack for a Trip to Puerto Rico