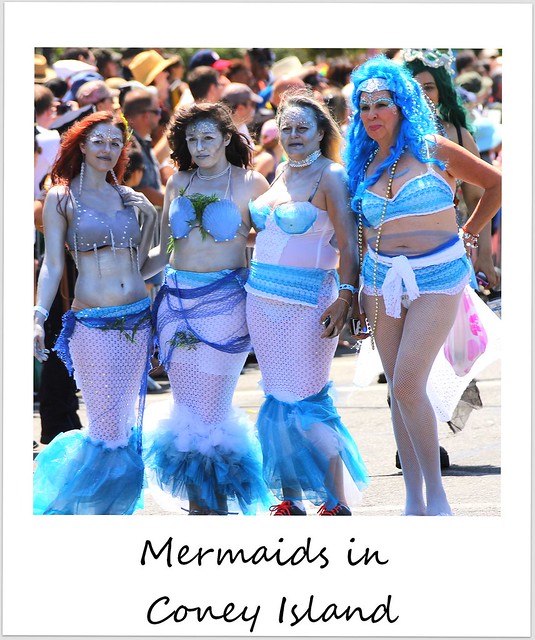 When we spent last spring housesitting in New York, I was bummed when I realized that we’d be missing Coney Island’s iconic Mermaid Parade by only a few days, because we’d already be en route to Germany when the artsy parade would make its way down the boardwalk on Brooklyn’s southernmost peninsula. The more excited I was when I noticed I’d be in NYC this year when the parade would take place for the 32nd time!

The parade was founded in 1983 to bring the mythology to life in an area of New York with street names like Neptune and Mermaid and to allow the artsy New York folks to express themselves in public in whatever way they desired – which is why you’ll see some very eye-catching and unique costumes along the parade route. Even though many of the costumes are mermaid and ocean inspired, artistic freedom allows participants to wear anything they want. Not only can people wear whatever (and as little!) as they want, but anybody can walk in the parade, which I loved. There were entire families, couples, seniors, babies, groups of friends and entire marching bands – an eclectic mix of New York’s artistic peeps. Many of the participants invest months in creating their handmade costumes, and I will share some of the fabulous dresses I saw during the parade in a colorful post next week – this is only a little teaser of a full photo post with mermaids and sailors, but also Transformers, Lady Gaga lookalikes, dragons and so much more.

The Mermaid Parade turned out to be everything I was hoping for and even more! If you find yourself in New York in mid to late June, make sure not to miss it. 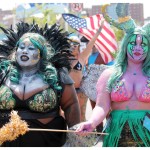 Polaroid of the week: Beach day in Coney Island

Polaroid Of The Week: Summer Night in Coney Island

What a moment that polaroid captures! I went to the parade once when I was young. It seems to have come quite a ways since I was there.

Thanks so much, Gary! I posted some more pictures here: http://globetrottergirls.com/2014/07/coney-island-mermaid-parade/ I would love to see how the parade has changed over the years, I bet it's grown so much!

I would love to go one day. I remember watching a travel show years ago that had the Mermaid Parade in it and I have wanted to go ever since

I am sure one year you'll make it to New York for the parade, Katie :) So worth it!! Make sure to dress up for it :D

I love the picture! I went to Coney Island when I was in NYC last July. Sadly I didn't see any mermaids there.

Thank you! I hope you'll be able to see the parade one year - it's usually on the Saturday closest to the official start of summer :)

That looks like the best parade EVER! How fun :)

Justine - I think it is the best parade ever! :) Try to make it to NYC one summer to watch it!