We had been advancing up the Nam Ou River for nearly an hour, cruising slowly between the white limestone rocks of the mountains that border the river right and left. Navigating the shallow wide river, we passed nothing but lush green subtropical forests, water buffaloes and pigs lazing and grazing on the sandy riverbanks here in northern Laos, and rice farmers waving at us as we went by. 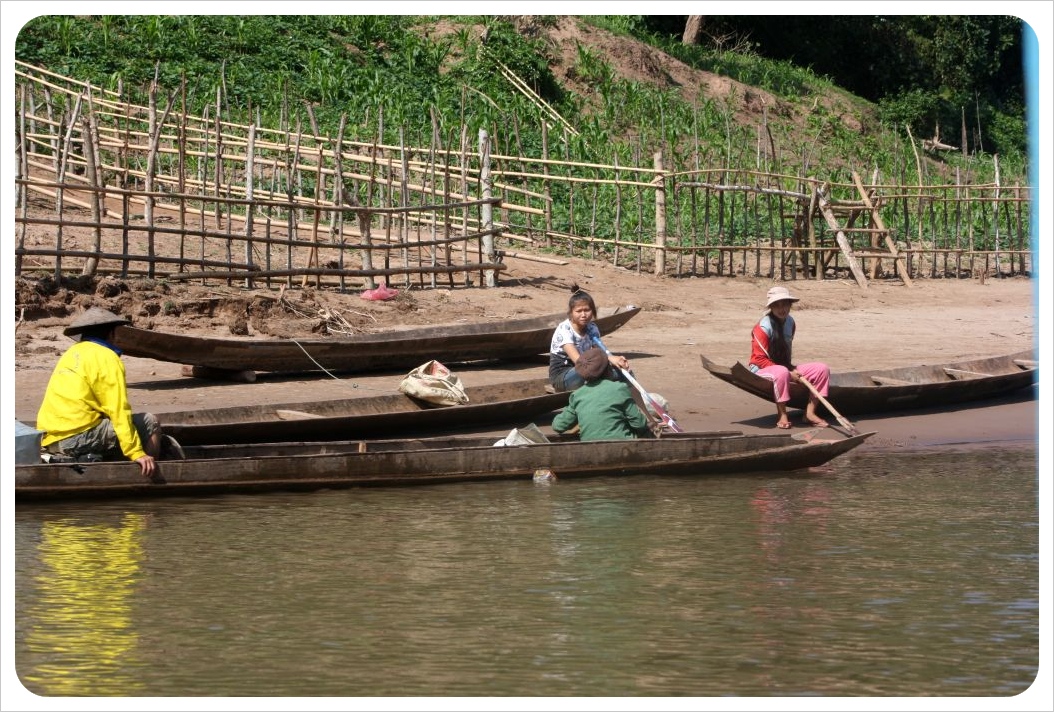 Although our longtail boat had a motor, it resembled the shoddy wooden boats filled with families, fishermen or supplies that float up and down the river between Nong Khiaw, where we were coming from, and a modest, off-the-grid village of Muang Ngoi Neua, where we were headed. 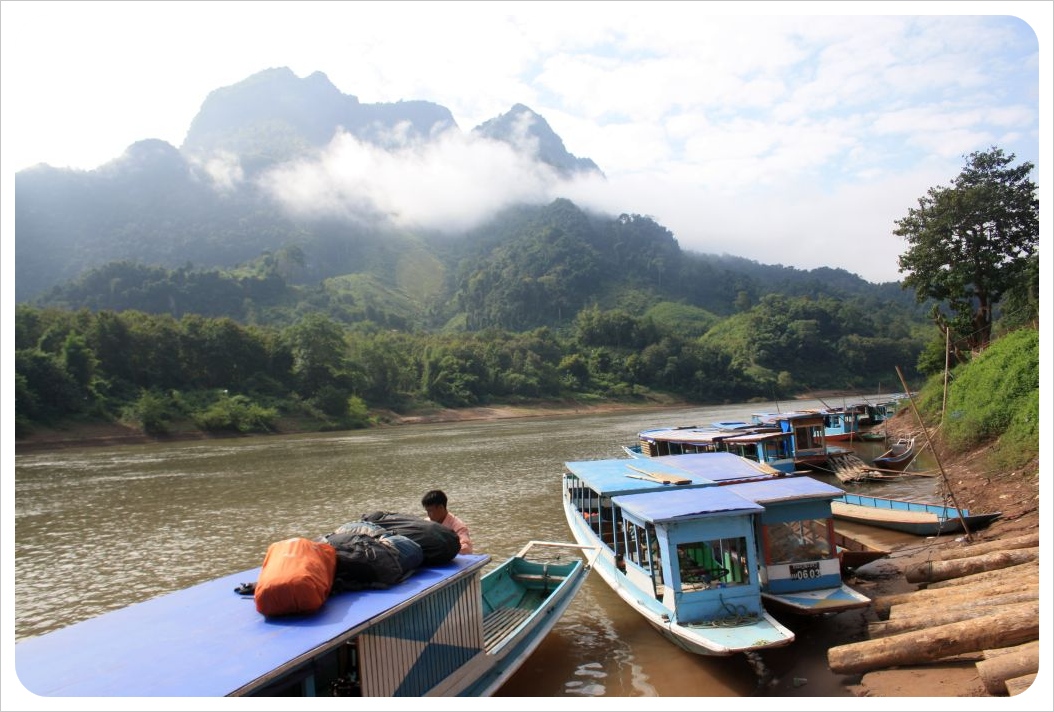 The river here is wide, but either side appears almost entirely uninhabited. That was until several houses nestled into the side of a hill came into view, along with a long set of steps leading down to the water. With no roads leading to this remote village, we arrived at Muang Ngoi Neua’s only access point – this simple cement river landing. From here, travelers can head three hours north to Muang Khua, a population with town status or the hour back to Nong Khiaw, a place which, had it not been for Muang Ngoi Neua, we would have considered remote and sleepy. But the first thing we notice now is that it is even quieter here. From the river we heard the breeze rustling in the leaves, despite the ten or so of us offloading and the pair of locals who came to greet us with news of their guest houses. 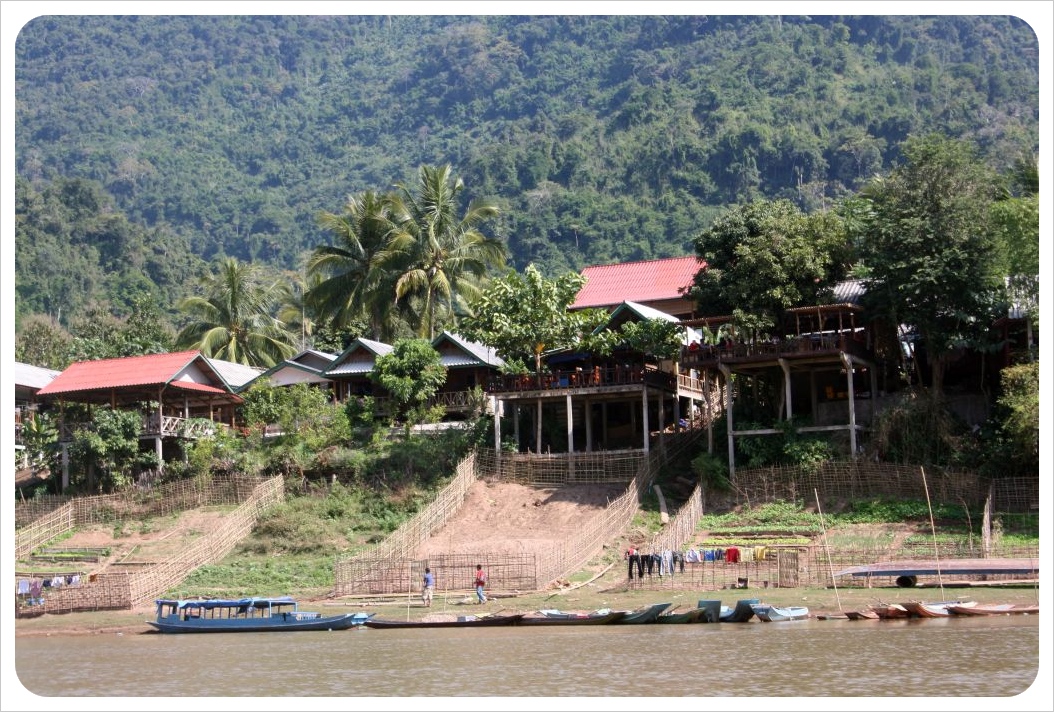 We chose a guesthouse, just overlooking the pier. The building is sturdy, walls of thick cement, and the room has a double bed, a bathroom and, like the rest of the village, only has electricity from 6-9pm. We paid the $5.00 it costs to stay here and headed out to explore. 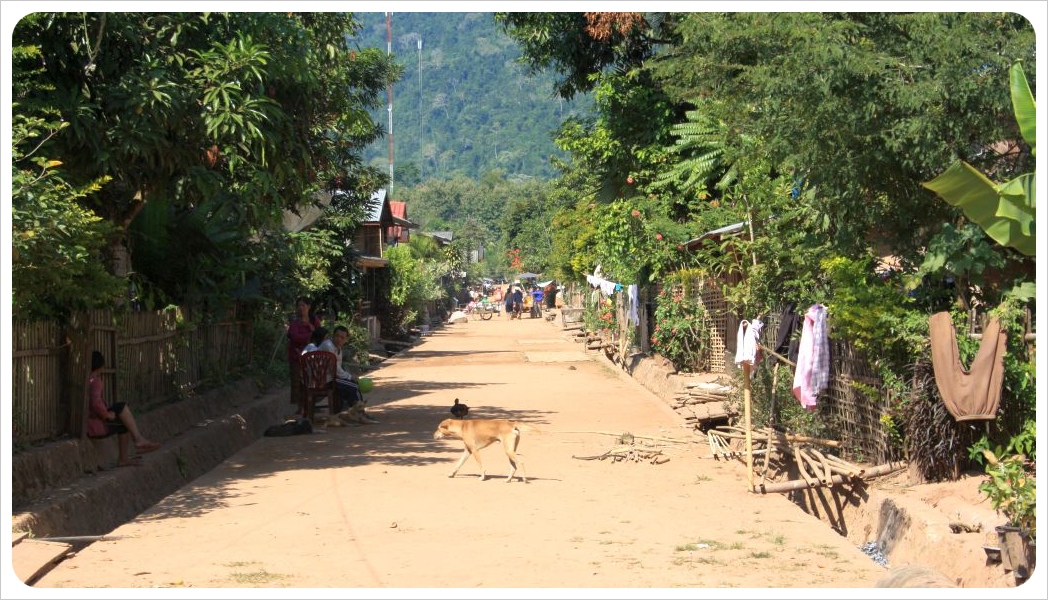 Figuring out the set up is simple: one main dirt road too narrow for a car to comfortably pass runs parallel to the river, and a few paths head off perpendicular from there. The main road has several guesthouses, restaurants and shops (one even filled with hundreds of carefully curated English books), the number of which are far out of proportion for the size of the village. This village is just starting to become part of the tourist trail, but only just. At the north end of the street is a beautiful, if unkempt, Buddhist temple. 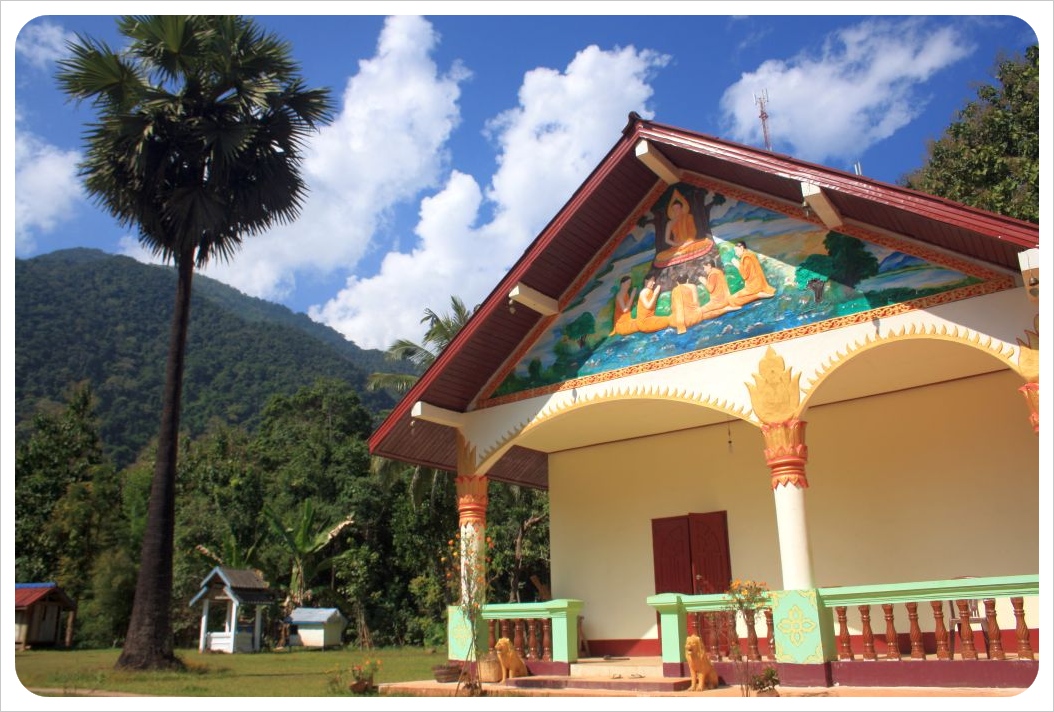 A smattering of lanky white tourists stand out here amongst the dozens of villagers who, as in most of rural Laos, live their lives almost entirely out in front of their homes and shops. Kids play, adults chat, eat or cook sticky rice, workers cut wood or effortlessly carry inexplicably heavy items to and fro, with bicycles – the only form of wheeled transport on this car-less island – weave in and out of them all. We stopped to play with dozens of cuddly puppies..there are more of them, it seems, than people here. 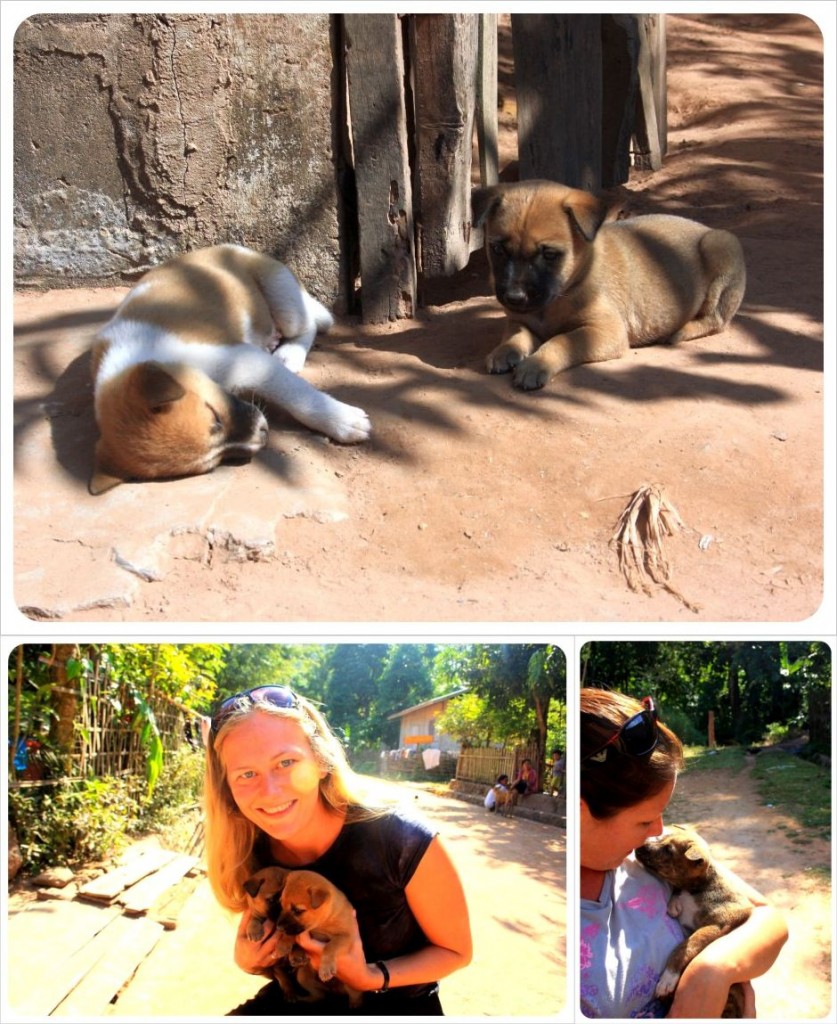 We gasped as a woman walked by with six squirrels hanging upside down on a stick, dead and ready for the barbeque. Another woman laughed at us, but in a loving way, and we felt instantly at home here. Then we decided to head up one of the paths to a set of caves which essentially define the town.

Aside from the overwhelmingly idyllic feeling, the mystic river sunsets and the absolute peace and quiet, the truly remarkable thing about Muang Ngoi Neua is that it came close to being wiped entirely out of existence. This peaceful village was almost entirely destroyed by bomb attacks by the United States during what is known as The Secret War, a war in which over one million cluster bombs were dropped over Laos. In an incredible tale of survival, the villagers here hid out in several caves high in the surrounding mountains for months at a time. 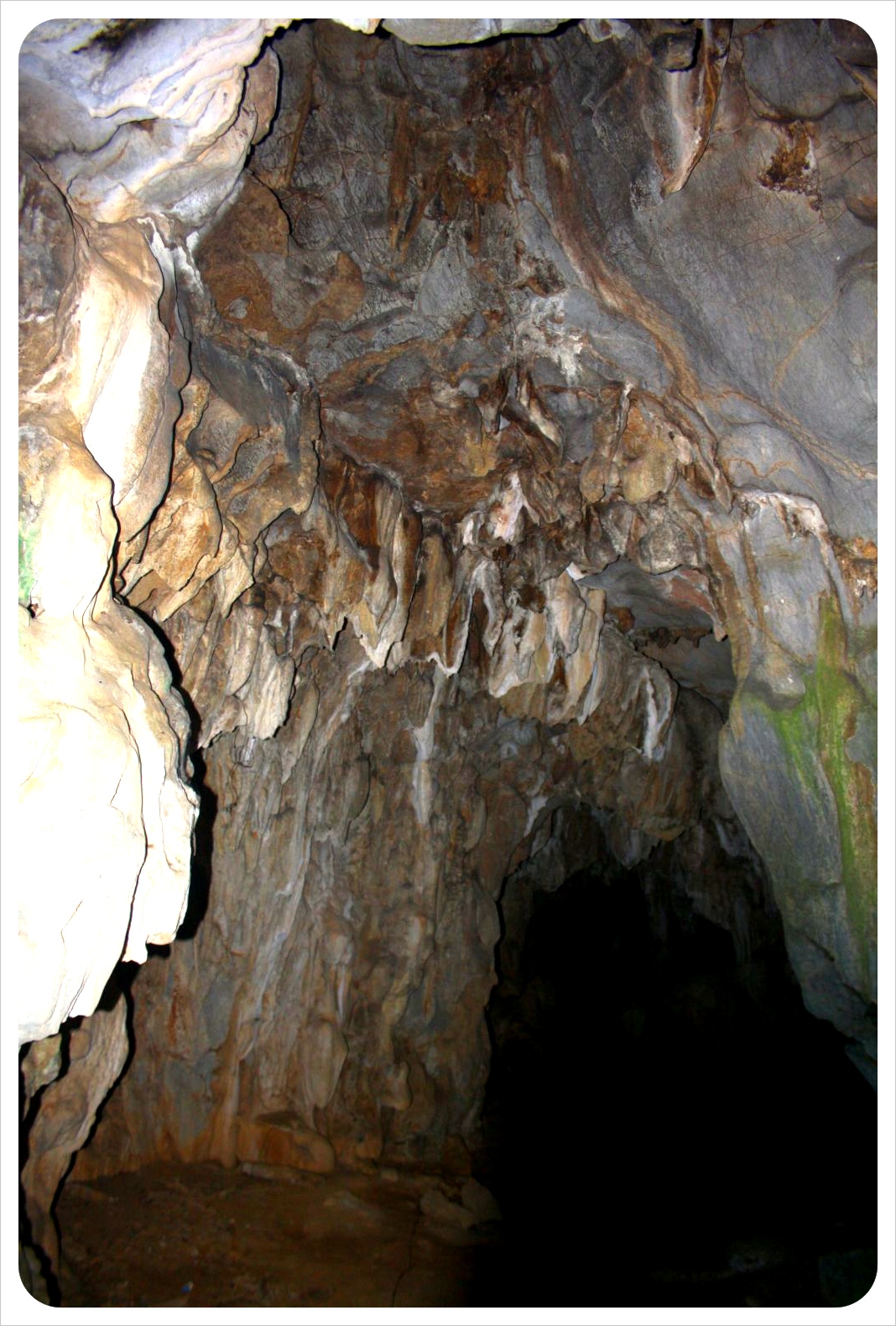 We ungracefully huffed and puffed our way up to these caves, which are now open for visits either independently or on treks with local guides. Inside the caves, light shines through high, semi-open ceilings, but it still feels like a damp, black hole, and we could still see utensils used by villagers at that time. I stood teetering on the rocky mountainside as Dani photographed inside the caves and we remarked on how intense our respect was for these people who not only survived in here, but also undertook the strenuous climb on a regular basis, under the cover of night, to replenish supplies. 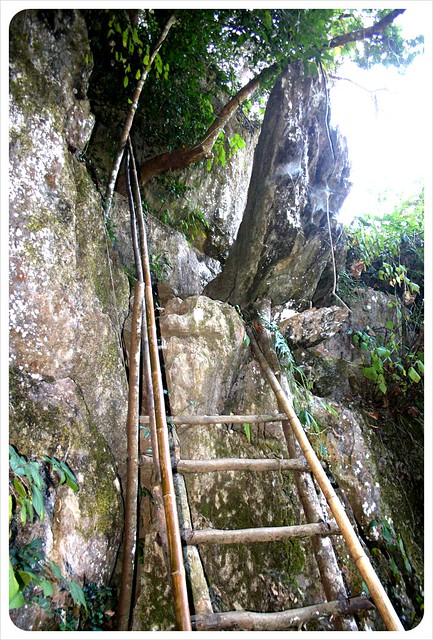 Witnessing remnants of war does not require scaling the mountains, however. Just peek around the front yards in village. We saw the most ingenuous uses of bomb casings – some used as flower pots, some as fence poles, we even saw a fairly large canoe created out of a bomb casing on our way up the Nam Ou River. There is a layer of sadness here, but the hope and friendly smiles outshine the dark past. 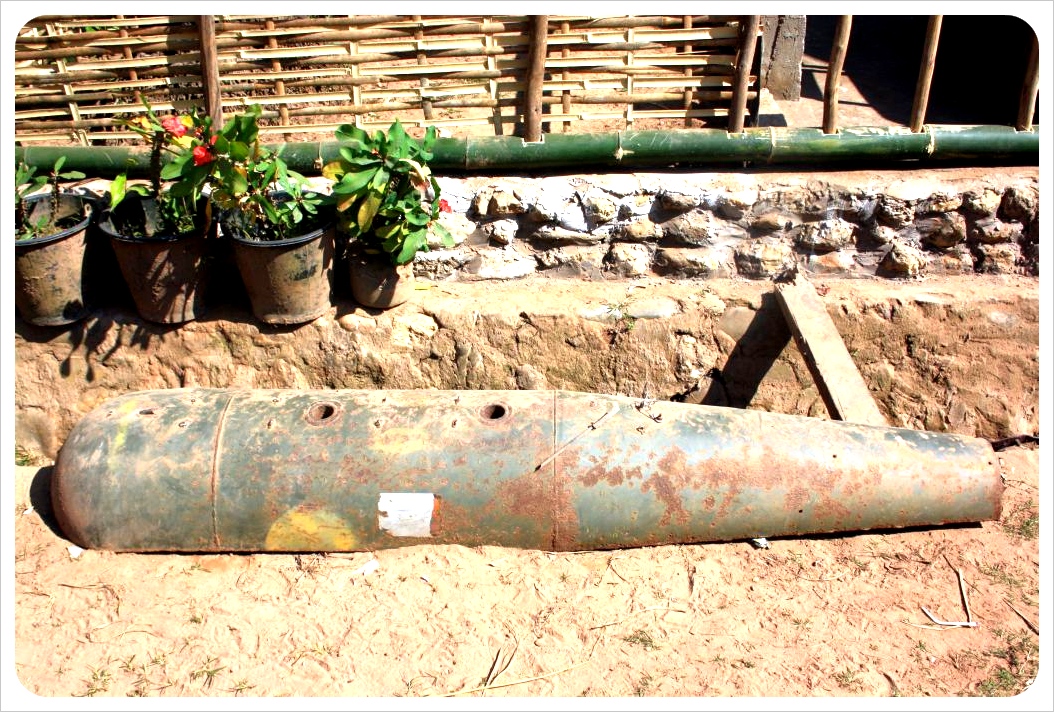 After the caves, we wandered through rice fields and forests until we noticed the sun nudging the tops of the mountains and realized it would soon be dark. Here in Muang Ngoi Neua, a place with three hours of electricity per day via a generator, that darkness lays like a blanket over the entire area. In fact, except for the fact that locals all have mobile phones, there are few signs that we are indeed in the 21st century, not a hundred years in the past. 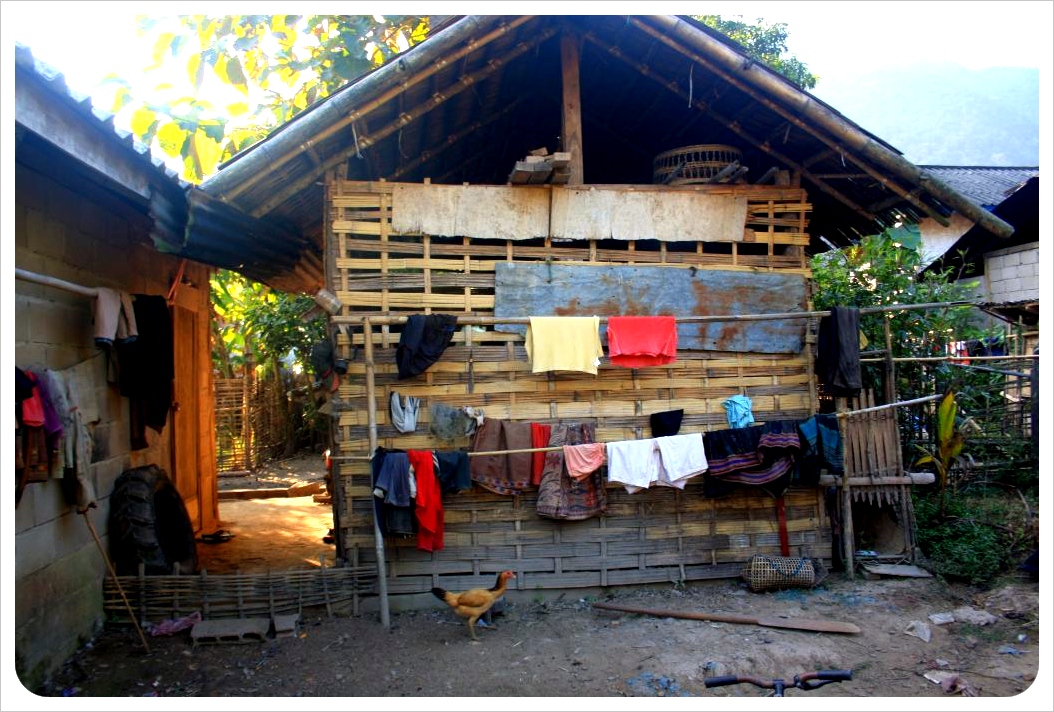 Immediately smitten, we  both harbored an instant maternal, protective feeling over our adopted village. This explains why we stopped dead in our tracks when we saw a sign offering inner tubes for rent.

You see, there is a town six hours down that same river, one that is equally beautiful but much larger, that began attracting tourists several years before. Once a serene village, Vang Vieng, is now unfortunately synonymous with ‘tubing’. Backpackers all around South East Asia can now be seen sporting ‘in the tubing’ tank-tops, proof of their drunken adventures tubing down the river, stopping at bar after bar, smoking joint after joint all the way. Rather than respect the modesty of the local culture, girls unabashedly saunter through town in their bikinis, guys shirtless in their trunks, treating the place like an international frat party. Despite having heard just how spectacular this area is in terms of natural beauty, we were too sensitive to the cultural insensitivity on display here to make the trip to Vang Vieng ourselves, especially since we keep reading disturbing articles on the state of the village. 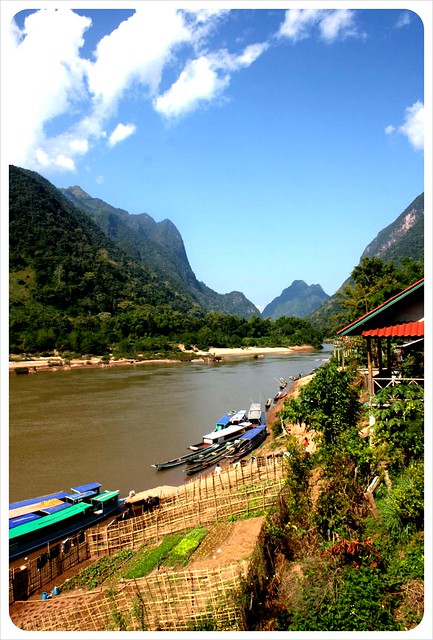 That is why it took everything we had not to tear down these tubing signs and poke holes in all the inner tubes here in Muang Ngoi Neua. The village is not large enough to adequately handle such a huge influx of visitors – not even of the most culturally aware, eco-friendly variety – let alone becoming another ‘in the tubing’ destination.

That is why we ask you, we implore you, please don’t go to Muang Ngoi Neua. The people and the puppies might have won over our hearts here…but you know, this an uneventful little place with nothing to do but take in rural village life. Oh and the sunsets are absolutely amazing. The food is pretty good, too. If that is the kind of thing that appeals to you (and who could blame you) you might visit this remote little village in Northern Laos, but promise not to tell anyone else about it…okay? 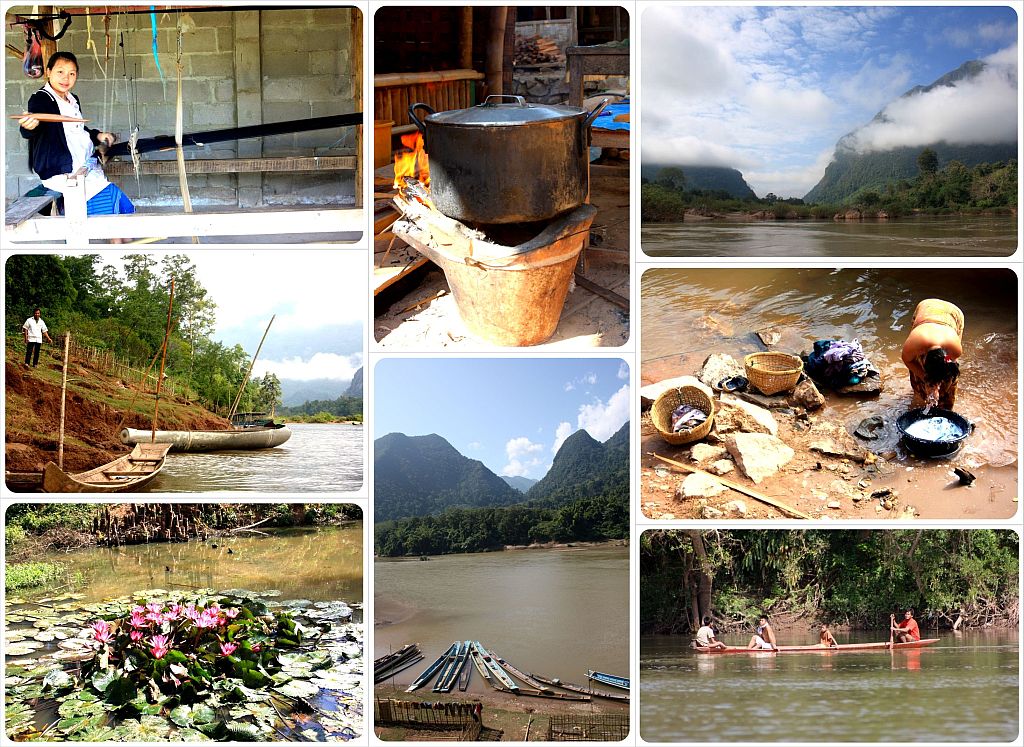 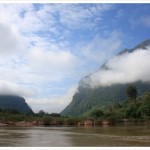 What I Wonder When I Wander: If knowledge is power, then why is travel weakening me with neuroses? - GlobetrotterGirls

[…] is exactly what is causing me apparently quite a bit of stress. Not stress like the people in Muang Ngoi Neua in Laos who had to hide in caves for a decade during the Vietnam War, scaling down a mountainside […]

[…] after touring the more remote areas of northern Laos, the French colonial city of Luang Prabang almost had a big city vibe. Within the course of an […]

My son and I spent several days in Muang Ngoi in October, 2014. Electricity had made its way to the village the year before but all food was still served fresh. Seemed the only real use of the electricity was lighting and refrigeration for beverages. It was fun to see the shop owners hit the street, catching chickens for the evening menu. Loved it and hope to revisit with my wife in a few years. P.S. He and I also spent several days in Luang Prabang and a couple of days in Vang Vieng. While in VV, we stayed in a hotel on the river a few miles outside of town overlooking the nearby karst(s) and visited an area on the opposite side of town known as the Blue Lagoon. He enjoyed town and the tubing more than I did and it should be noted that the government wisely shut down the crazy bars and drugs that had been rampant in previous years. There were also signs instructing visitors to dress modestly out of respect for the locals. All in all, I much preferred the "dirt-street villages" over the towns and would not hesitate to return.

I love reading about how other people have experienced Muang Ngoi - thanks for sharing, Dennis! It's now been ten years since I visited Laos (time flies!) and I'd love to go back and see how the village has changed.

Currently in Muang Ngoi and can't wait to leave. It is dull there are now more farangi than locals. Practically every building here is a guesthouse, restaurant or tourist shop. Wouldnt recommend.

I am so disappointed to here this :( Muang Ngoi was such a little gem when we visited. I guess a lot can change in a few short years.