We had heard about the train ride along the Panama Canal months before arriving in Panama City, and there was no question we were going to do it. In fact, we had really been looking forward to it. I have been fascinated with the Panama Canal for years, and we both love train rides – an activity nearly non-existent anywhere else in Central America.

The idea of connecting those two for a great day out was a no-brainer, with thoughts of speeding through the dense jungle which connects the Pacific and Caribbean coast, spotting exotic animals and fascinating flora, learning more about the canal and spotting the mega-container ships as they are lowered and lifted at locks along the canal. Unfortunately, the train ride didn’t quite live up to our imagination. 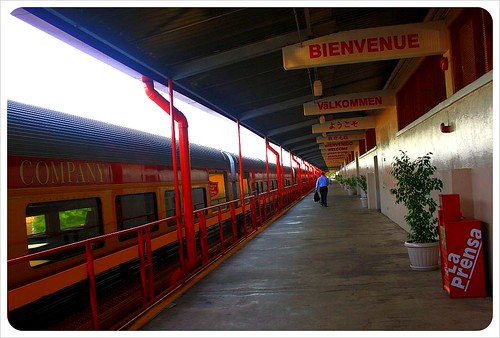 Luxury on the rails?

Described as a luxurious train ride by two different guide books, we were so tempted by the experience, even in spite of the early morning departure time. The train leaves from Panama City at 7:15am and arrives in Colon on the opposite coast 45 minutes later, returning to Panama City at 5pm. 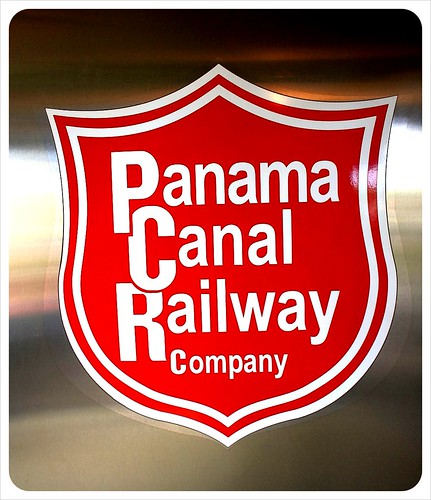 In reality, calling this trip luxurious was a stretch. Sure, the train car’s design harks back to the glory days of train travel, with carpeted floors, soft, low lighting and strong wooden paneling throughout the car. Waitresses served us each a very tiny paper cup of instant coffee, a small plastic cup of candy yogurt and a cookie. But that was as luxury as it got. No guide explained what we were seeing, no fun period music played in the background, no typical Panamanian food/breakfast/coffee was served on board. Panama City does luxury very well, and while this train ride was pleasant, it was by no means luxe. 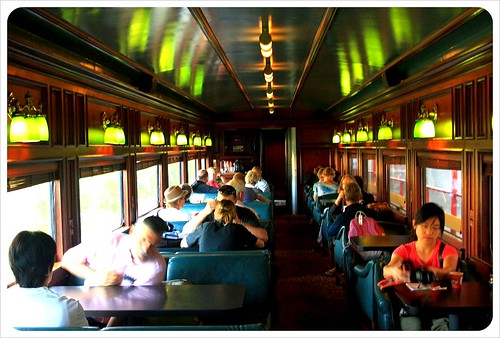 Only one train runs along these rails each morning and evening, and as such, this is not only a tourist train but also functions a commuter train. The 7:15 departure time is geared much more toward professionals than any sort of comfortable time for tourists. On arrival to the station, foreigners are led to a specific car of the train, and locals, who most definitely do not pay the $44 return fare, are seated in the five to six additional cars with the same views, minus the free coffee. Back in the tourist wagon, we were lucky enough to snap up the last seats with canal views, and those who came after us were seated on the other side of the car. 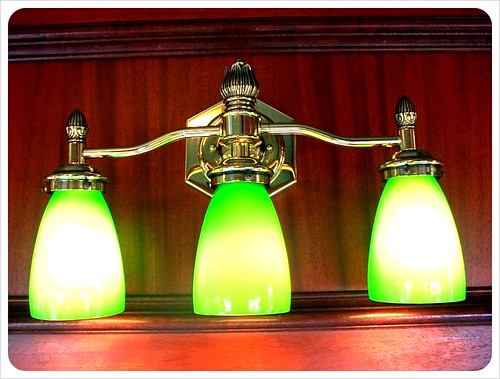 Where are the views?

Plenty of people went outside to the viewing platform outside and took pictures, but the views were okay at best. Where was the wildlife everyone was talking about? The train cuts through green jungle for most of the way, but we saw much more wildlife in the Metropolitan Park ($4 entry fee) right in the heart of Panama City.

The canal itself was only visible in parts and we spotted water through breaks in the flora until reaching Gatun Lake. This is widest part of the canal as well as the most beautiful, yet as quickly as the lake came into view, it disappeared again, very similar to the feeling of the canal ride in general. 55 minutes sped by so quickly it felt like as soon as it had really begun, it was over and we had arrived in Colon. 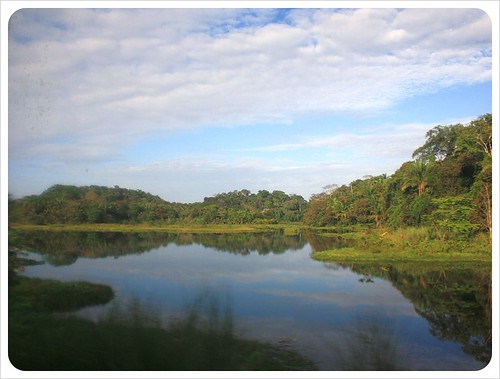 Before getting off the train – and not a minute before – every passenger was given a ‘Panama Canal Train Ride’ snack box with a mini-can of Pringles and small packs of cookies, peanuts and raisins. Despite its childish Happy Meal feeling, the main issue we had with this was wondering why on earth these snack packs would not have been handed during the ride? Many of us had not had any breakfast and the station had no food at all, so most of us were already ravenous. 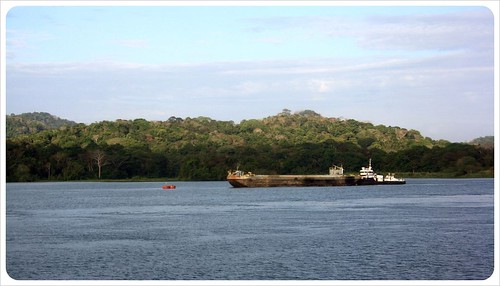 Will we get robbed?

The train ride does not even extend to the third and final set of locks, but rather right in the center of the city – known by all as one of the most dangerous cities in Panama. Locals had warned us not to visit Colon at all, but what to do for those nine hours before the train returns at 5pm? 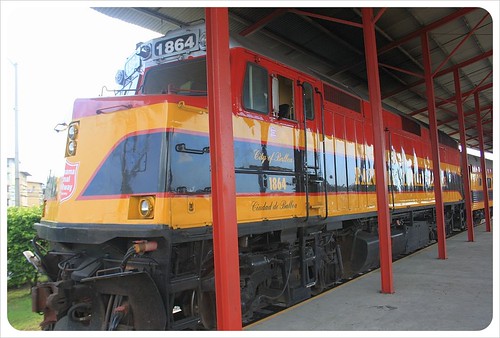 Upon exiting the train, it was expected that the tourists allow themselves to be corralled once more into one of the day trips to nearby beaches (for $100) or overpriced trips to the nearby Gatun Locks ($60 – the bus there was 25 cents) offered by taxi drivers with fancy (old, torn up) posters at the station, which every other traveler but us seemed to do. After fifteen cabs took the 40 passengers everywhere else but Colon, we were semi-stranded, alone, at a train station in a seriously shady area. We shortly found our way to the bus station and headed to the Gatun Locks. 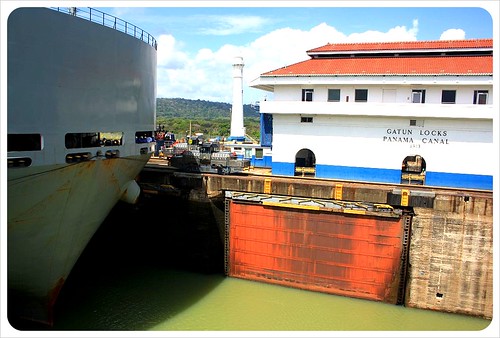 The visit was fascinating, and a more intimate affair than the Miraflores Lock in Panama City. The staff was full of information, answered questions personally, and visitors were few and far between in comparison.

However, after an hour, with no museum, no café, no visitors center, we weren’t sure how to spend the next several hours before the train returned. We opted instead to return to Panama City by bus, which, at a fraction of the fare was just as fast and brought us directly to Albrook Mall in the city, rather than the train station which is a cab ride from anywhere. 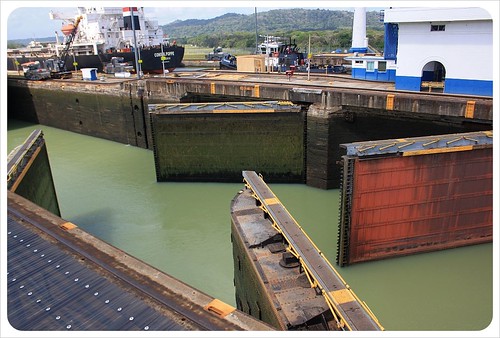 Would we recommend the Panama Canal train ride?

Here is what we do recommend:

If you only want to have seen the Panama Canal, visit the Miraflores locks from Panama City. For all other travelers who are truly interested in the Canal, we would recommend a visit to the Gatun Locks for a glimpse of the massive container ships head into the Caribbean or into the Canal to head out to the Pacific. Take the bus. It’s $1.50 instead of $22 per person.

If you are looking to spot wildlife, go to Parque Metropolitano or Metropolitan Park, a jungle right inside Panama City.

For day trips to the beaches, rent a car. Four people pay $88 for the train one way, and a Panama City car rental costs less and gets you to the beaches and back.

If you are looking for a quick beach escape, take the ferry out to Taboga Island instead. From here you can see the container ships lined up to pass through the canal, all while sipping on a cold beer from the comfort of the sandy beach. 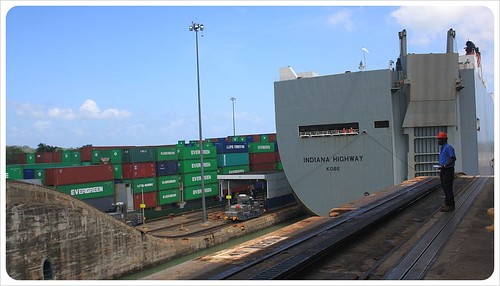 Have you ever anticipated an excellent place/tour/experience and were disappointed by the outcome? Is there an experience or tour you have done that you would advise people not to take part in? Please help everyone to avoid such rip-offs in the comments (oh, and if you have done the train ride and enjoyed it, feel free to let us know about that as well!) 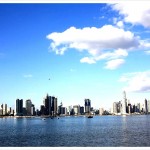 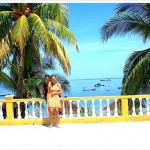 Very helpful insights, Much appreciated! You've talked me out of the train trip.

Thank you so much for your review and advice! I love train rides, but $50 round trip (in 2022) - nope! I'll visit Panama soon and look forward to riding their metro end to end and finding some of those ancient school buses that seem to still run in various parts of the country :)

very informative and to the point. I am planning by myself, adult female 73, and all your description, blog and comments help me to rearrange my itinerary. Thanks..

I am taking a cruise from Spain which ends in Colon. I'd like to know what to do/how long to stay in Colon. I like to follow that stay by taking a boat from Colon via the Canal to Panama City and then explore there for a few days before flying out. I'd Really appreciate any suggestions you have and thanks for the advice on the train-not.

I suggest you get out of Colon as quickly as possible. Not a great place to linger around, trust me. Panama City is much nicer, don't miss Casco Viejo, the historic quarter there.

Was just looking up whether it was worth doing the train trip tomorrow, and am glad to have found this article! Thanks for saving me $44 and a boring day in Colon!

So happy to hear that! I hope you found something better to do :)