Ometepe Island in Lake Nicaragua is the largest fresh-water island in the world. The name Ometepe means ‘two mountains’ and refers to the two impressive volcanoes that are the island’s characteristic feature. The Maderas volcano is on the right, Concepcion volcano on the left in the image below.

The island has been inhabited for thousands of years, first by the Nahuatl, and today by the local ‘Ometepinos’. These locals remained secluded from the rest of Nicaragua and the country’s conflicts throughout the years. Residents here were self-sufficient thanks to the extremely fertile volcanic soil which allowed them to live entirely off the land.

This has radically changed in the last decade. Initially travelers began arriving due to their attraction to the island’s supposed magic or mystique. Now Ometepe Island has become a main stop on the Nicaraguan tourist trail.  Jess visited the island in 2000 and again in 2011, and was stunned at difference – from the number of hotels and organized tourist activities to the way of life in the island’s larger towns, not to mention the existence of a well-paved road! However, the further away from the main ferry terminals you go, the more villages you find where people still go on with their lives as they always have. 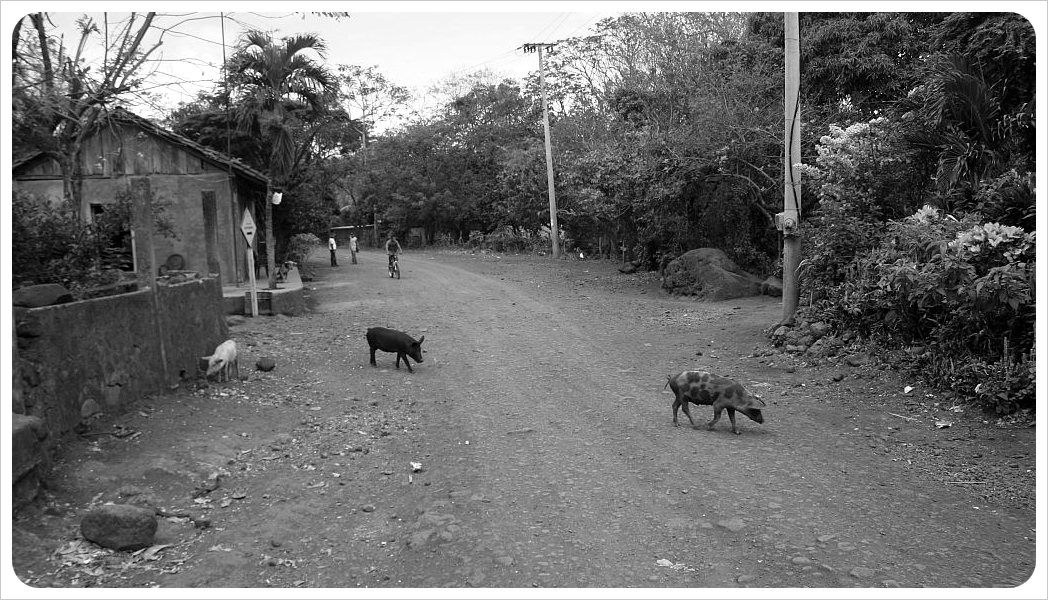 The village of Balgue on the southeastern part of Ometepe is the last stop for the bus, as it sits at the end of an unpaved, but still  passable road (beyond this, the road becomes more of a path which leads around to an area with several of the island’s petroglyphs). This is a far cry from the new, smooth asphalt road which connects the main ferry port of Moyogalpa with villages on the way to Santo Domingo, a developed, tourist-friendly part of Ometepe with quality hotels and restaurants.

From Santo Domingo, the road turns into a rocky mess which we wouldn’t have wanted to drive ourselves. It leads to Balgue, a village in the shadow of Maderas volcano where daily life,  not focused on the tourism trade, goes on as it always has. 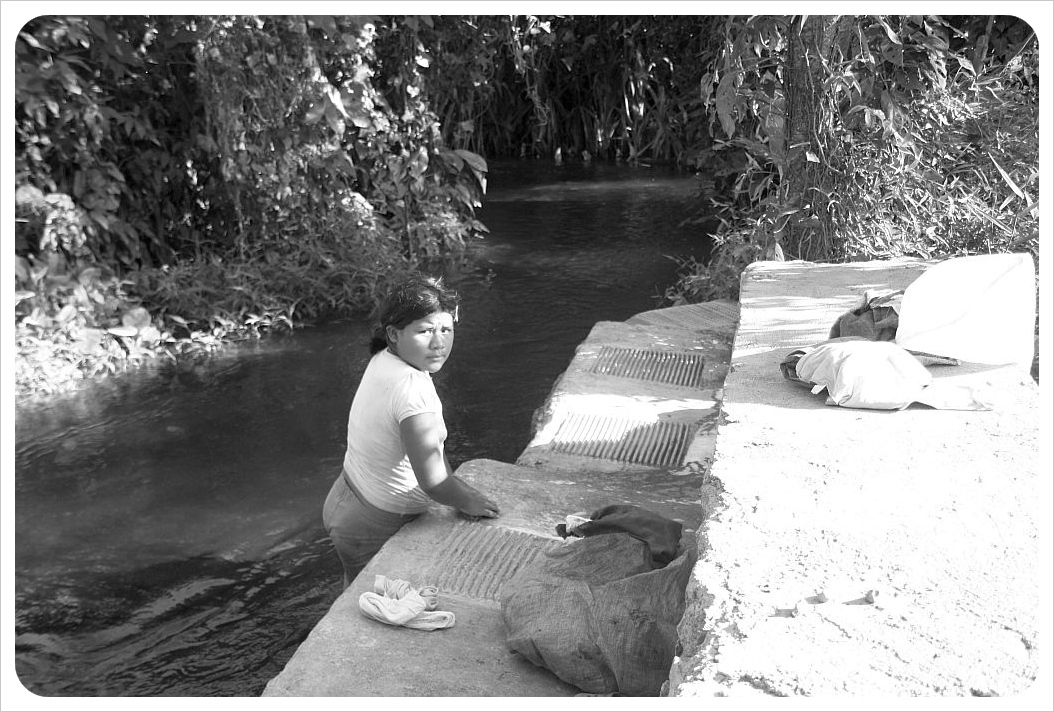 In rural parts of Ometepe, you’ll still see laundry being done on the shores of the stream – a common meeting place for the women of the village. 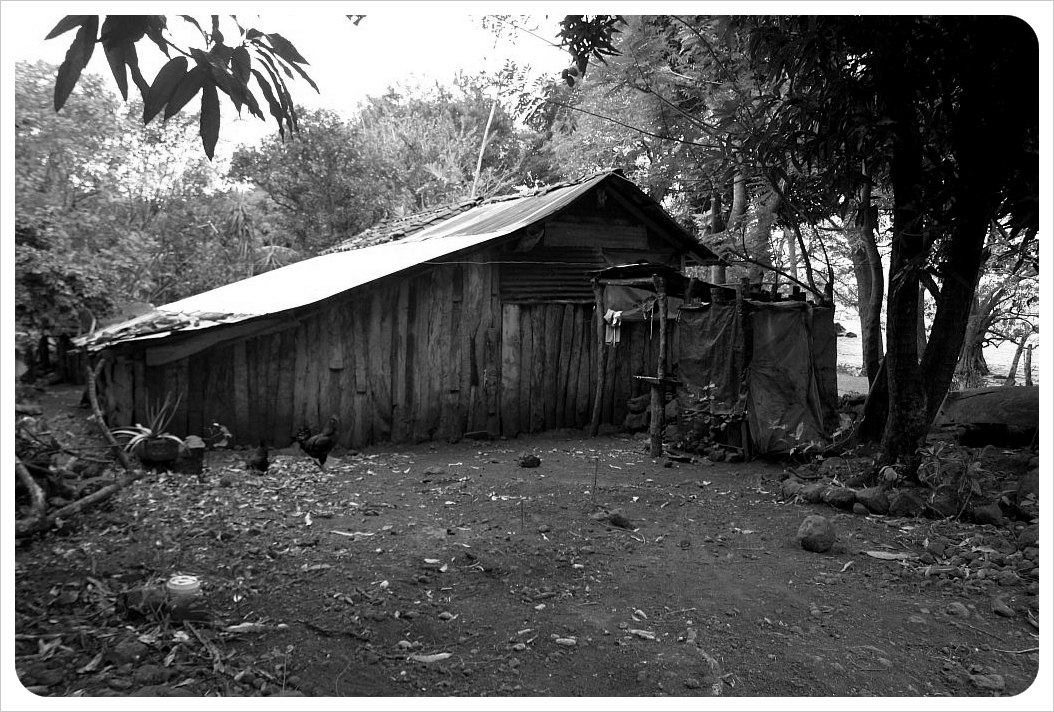 Most of the houses are still made of wood, in the traditional way, although more and more people have started using concrete to build sturdier homes.

The Animals of Ometepe 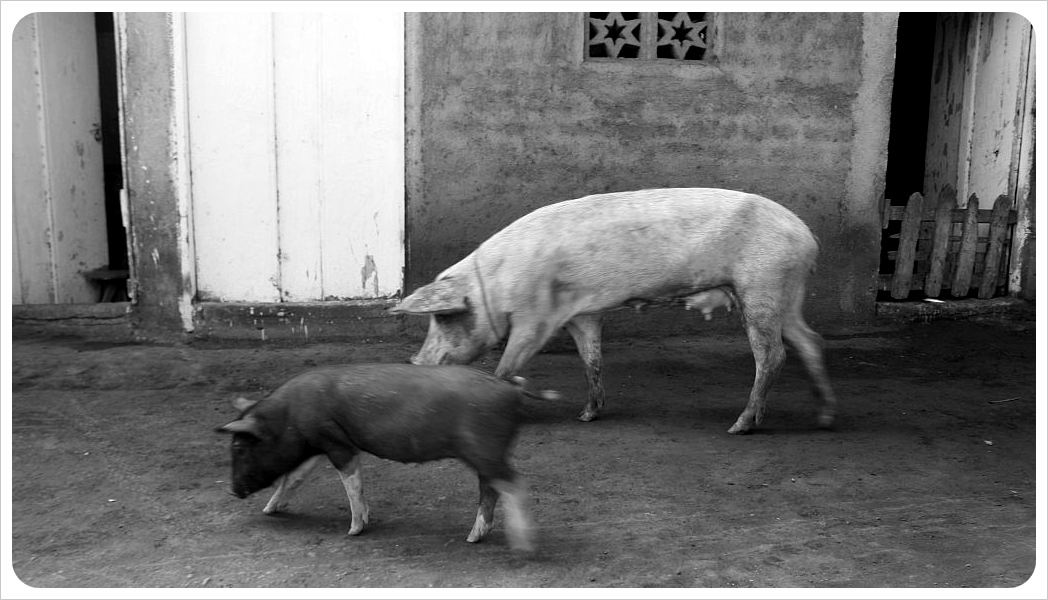 Instead of cats and dogs, most villagers here, like in many parts of rural Central America, have cows, chickens and pigs in the yard. 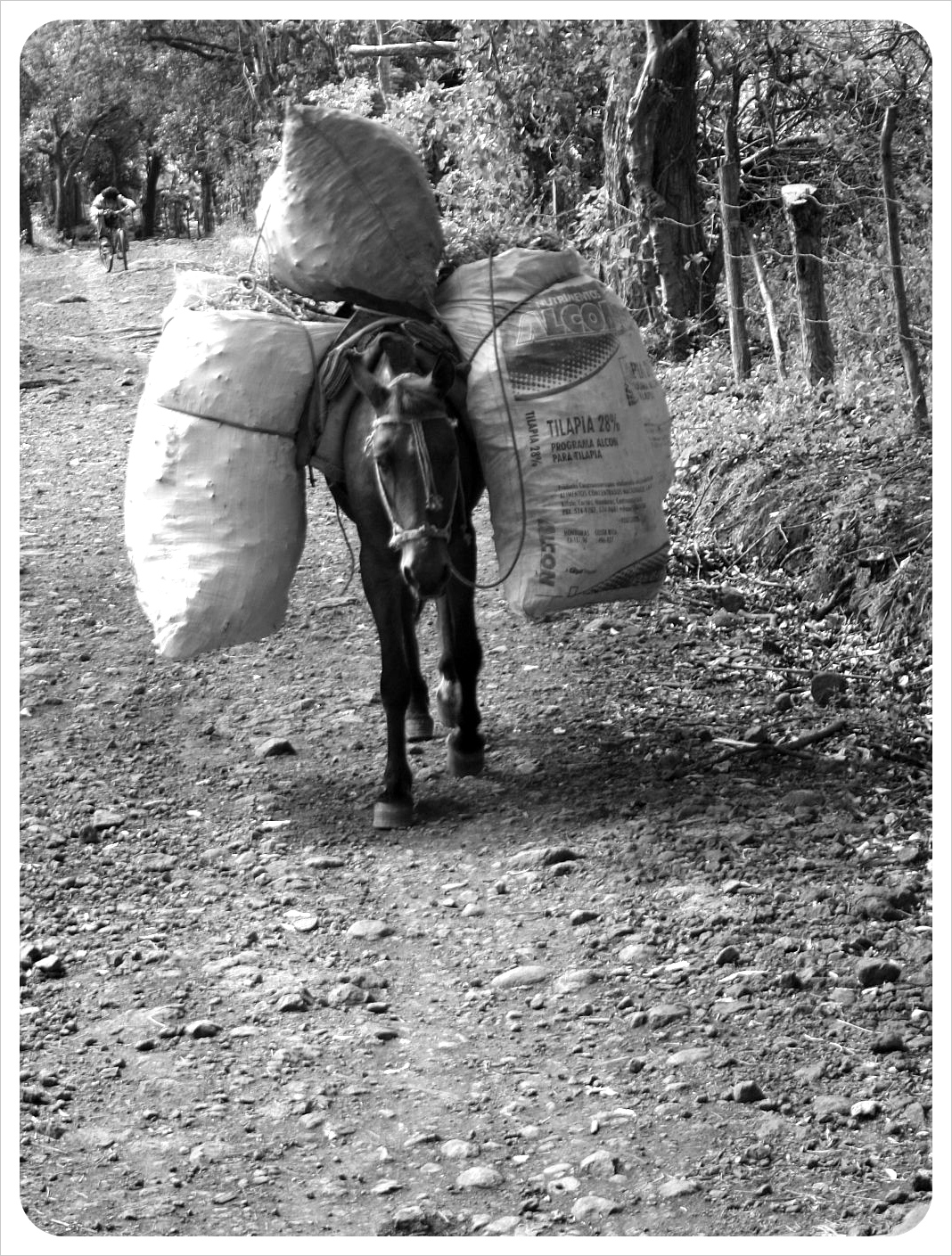 The majority of the villagers here do not own cars, and use oxes and horses to work the fields or transport wood and other materials. Sometimes the animals seem to walk entirely alone down to the village, like this horse we saw, packed down and plodding along the trail while his owner hung far back chatting to people as they passed by. 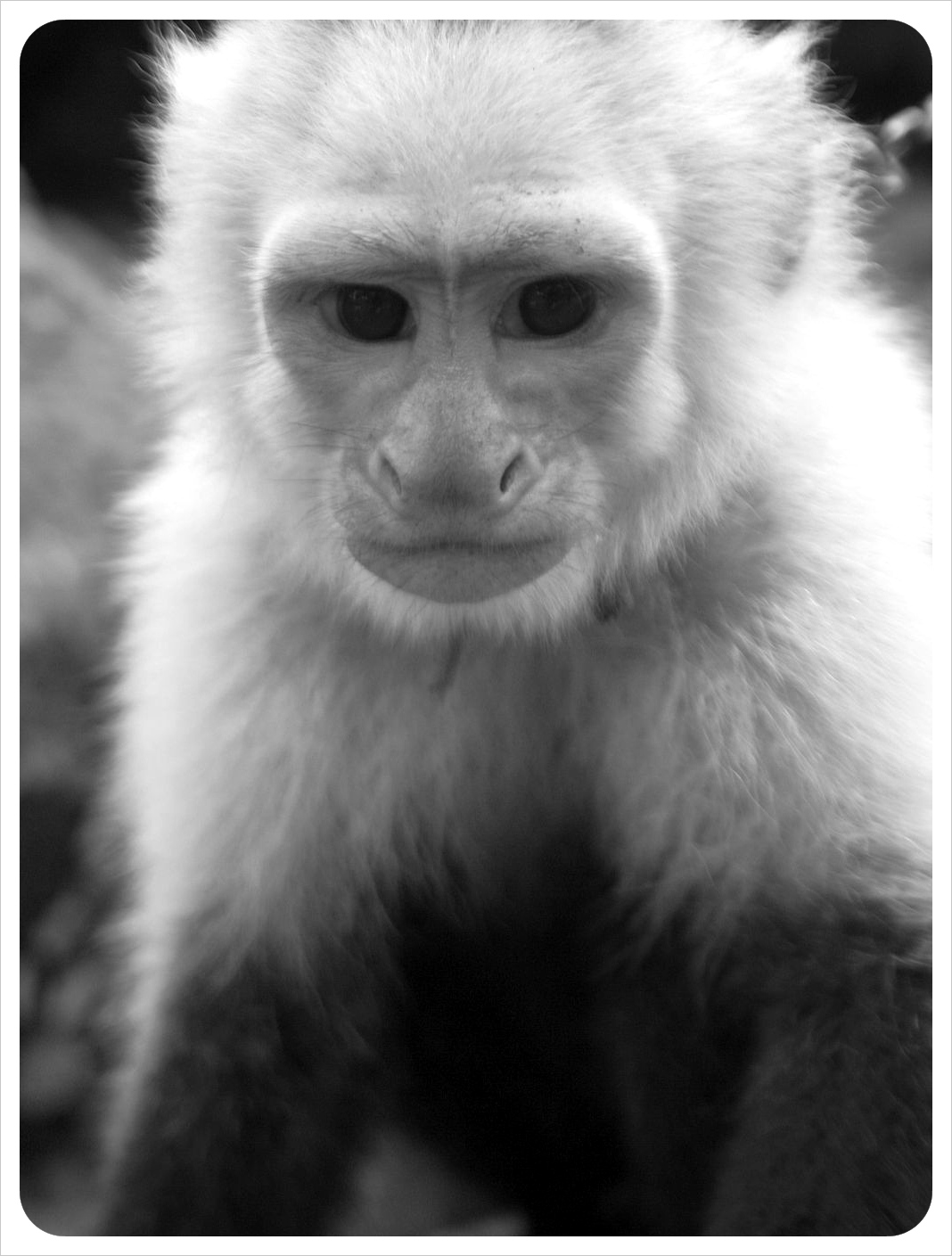 Three kinds of monkeys – spider monkeys, howler monkeys and capuchin monkeys –  live on the island, so you will definitely see them swinging through the trees. You won’t need an alarm clock, as the howler monkeys will wake you up first thing in the morning. Unfortunately, some locals – though now a small number – keep monkeys as pets. This capuchin in Balgue was kept on a chain and seemed miserable. 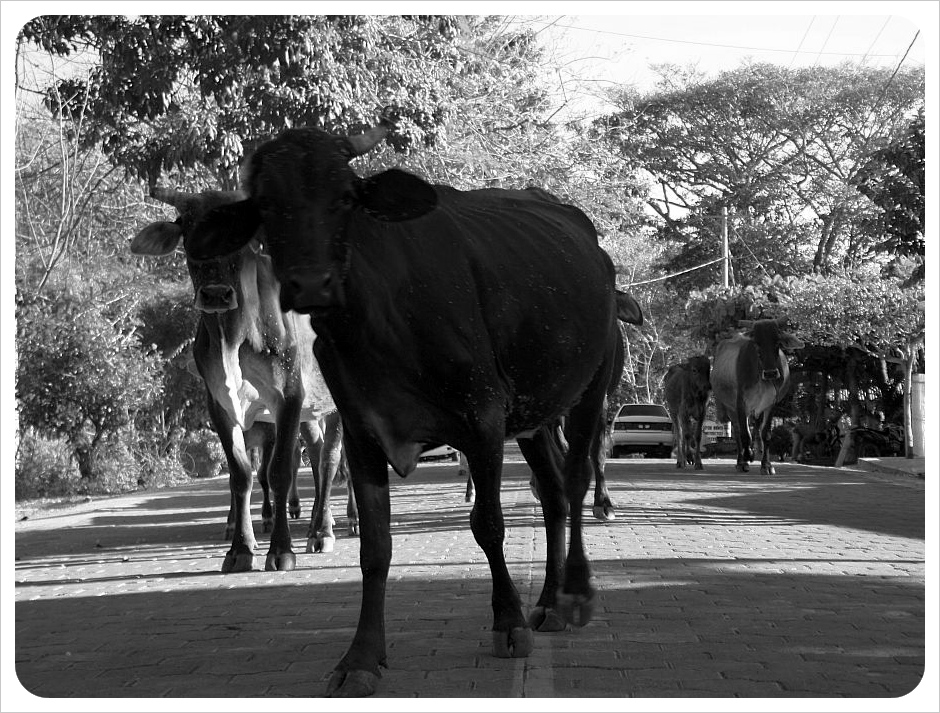 Watch out! If you are not careful, you might even get trampled by the cattle… 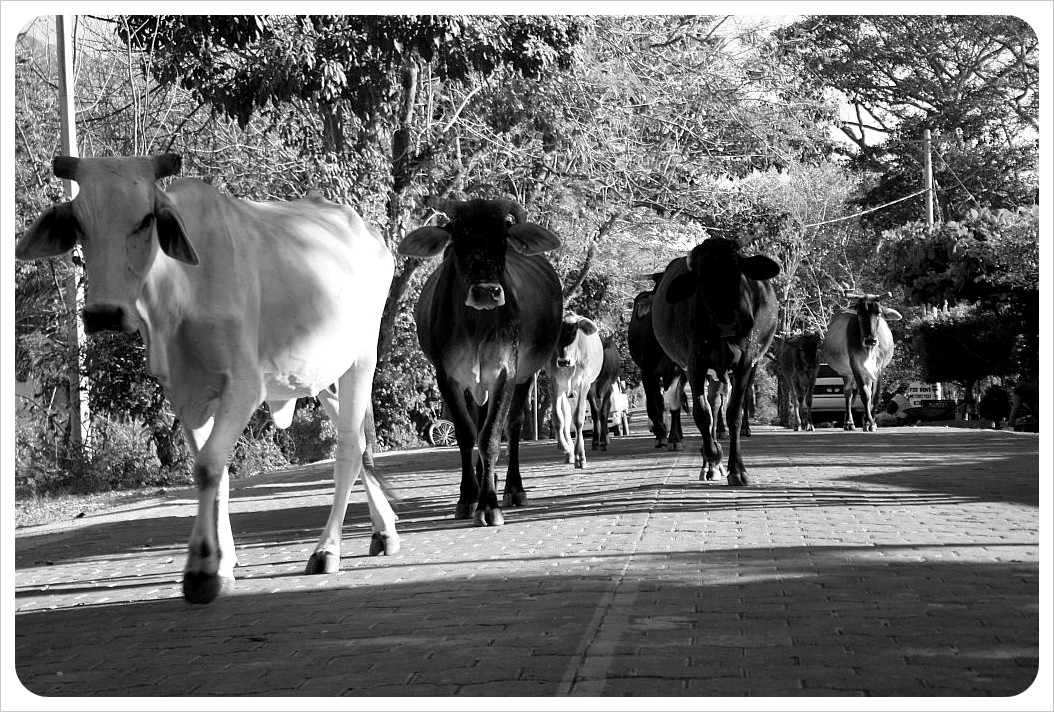 …who use the streets more than the few buses and cars on this part of the island, which lies in the shadow of Maderas volcano.

The Volcanoes of Ometepe

The Maderas volcano is the popular choice amongst visitors to climb (though the eight-hour trek partially knee-deep in mud did not interest us in the least). The main reason why the Concepcion volcano (below), which rises so majestically out of the western part of the island,  is a less popular climb has to do with the fact that Concepcion is still very much an active volcano. Ometepe saw the volcano’s last severe eruption in 2010. 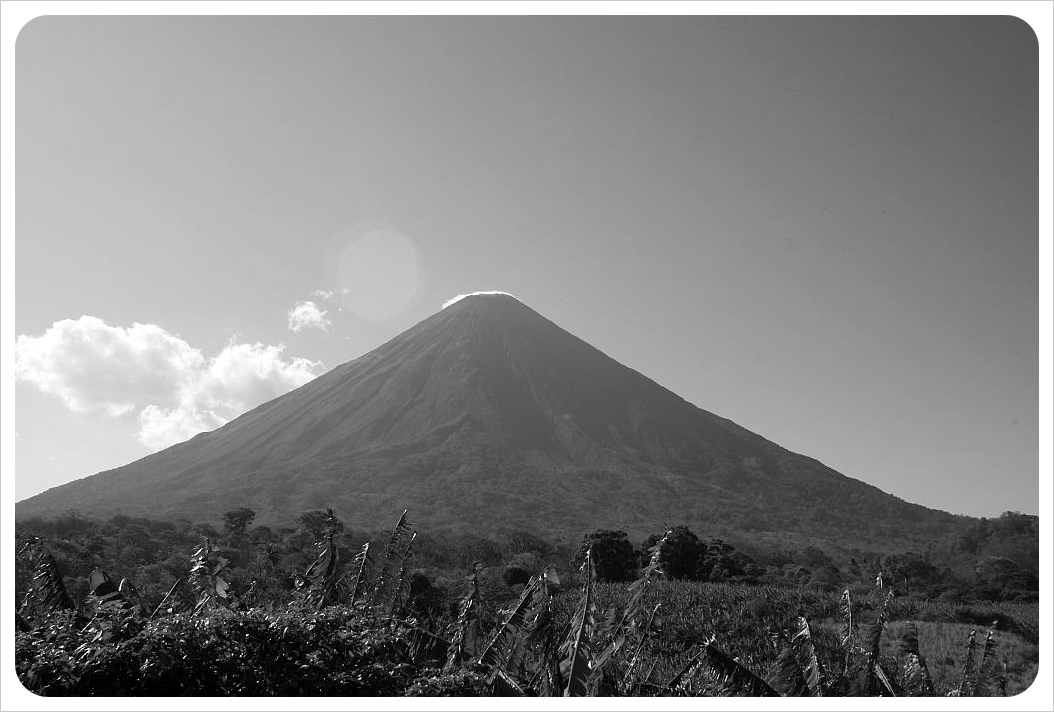 Despite the government’s warnings for locals to leave the island, only very few followed the order and evacuated. The rest remained on the island, and despite over 34 eruptions within 24 hours, a few of which shot ash over 10,000ft  (3,000m) in the air, no one was hurt. 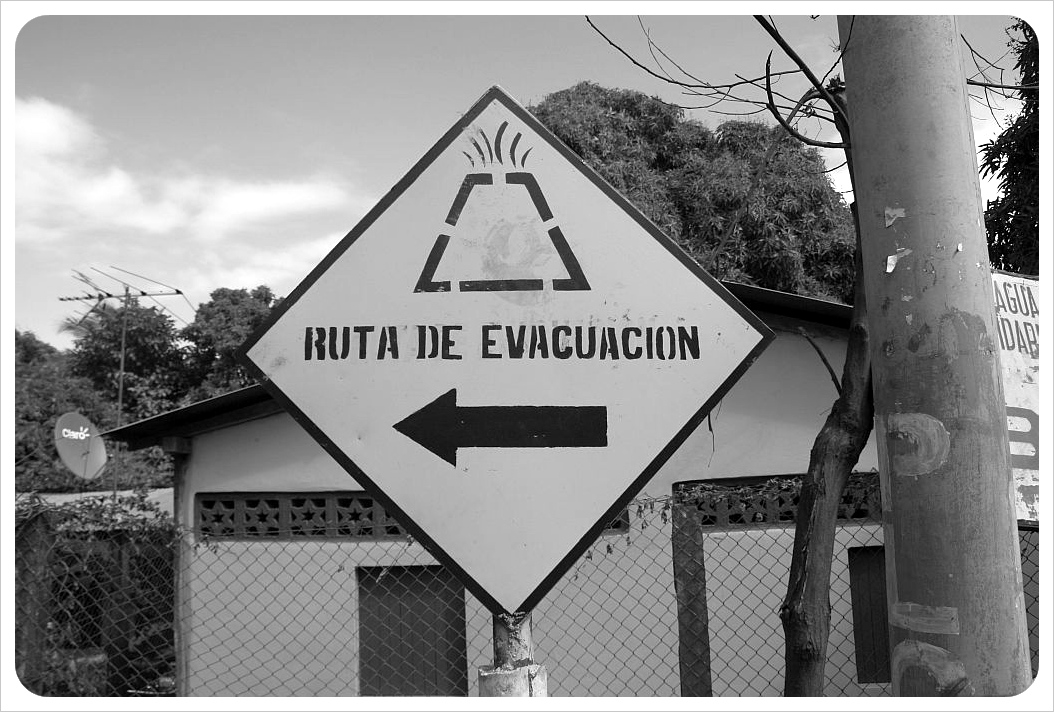 The future of Ometepe Island

We hope that the villagers on Ometepe continue to have that hard-as-nails mentality to stand up against future eruptions, both of Concepcion volcano as well as the eruption of tourism that is dramatically altering the essence of Ometepe Island. 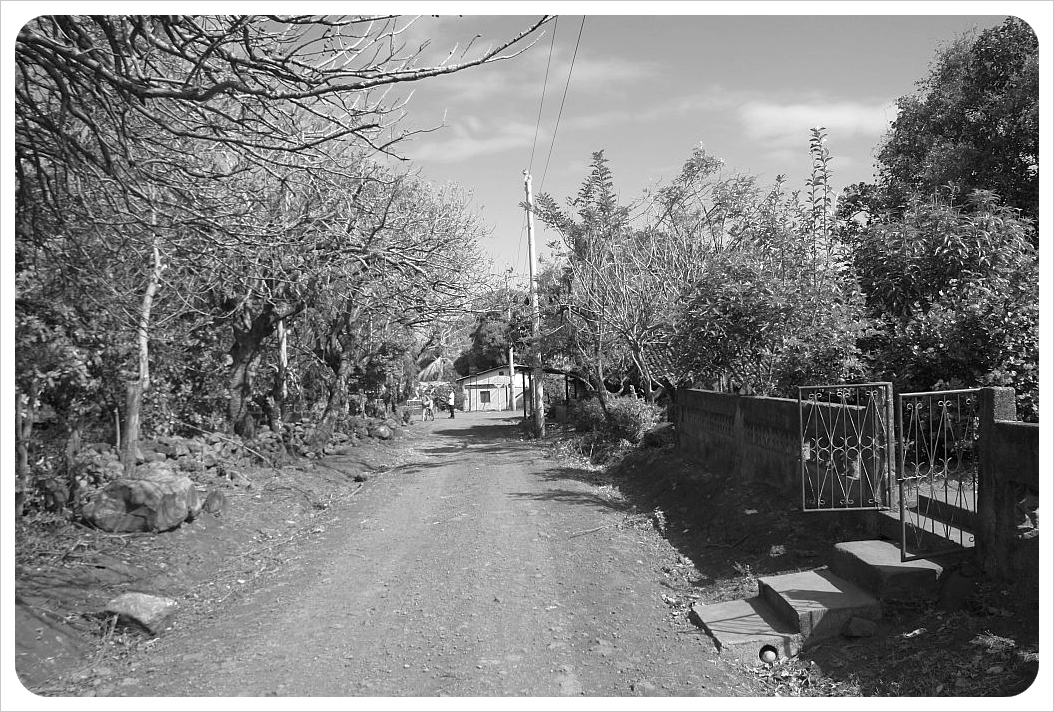 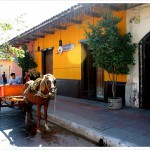 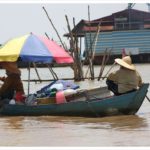 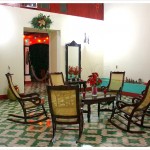 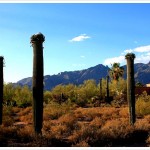 Does anyone know if ometepe is gay friendly? I would like to do a homestay with a family in the community, but don't want any issues with us sleeping in the same bed, etc.

I think Nicaragua, especially rural areas like Ometepe, are still very conservative. As two girls we had never any issues sharing a bed though.

I spent a few months living in Balgue. It's a beautiful place with wonderful and warm people. In one of the pictures you can almost see the house I was staying in. Brought back some great memories, I will definitely be returing.

Oh wow, Jordon,Balgue! Definitely remember it and glad we brought back some memories for you :) were you doing volunteer work or did you just decide that was the place for you for a while?

Thank you for the photos, I just spent time there in March and I am returning in Aug for three weeks with my husband for more mission work. I have mixed feelings about the tourism, as it could be very good it also can be not so healthy. I love Nicaragua and the people....thank you for sharing!

Thanks Rose - Isla de Ometepe is such a fascinating place... I can understand you have mixed feelings about the tourism. On the one hand, it brings extra profits to the island but on the other hand, it unavoidably brings changes, which are not always positive. Nicaragua is still one of our favorite places in the world, I hope we get to return soon.

Amazing photos! We were on Ometepe in 2004, and it become on of our favorite places. We have so many good memories there, and your pictures bring it all back. When we were there, they were in the process of paving the road with those small bricks. It's interesting to see the cows walk along it now.

Thanks Bryan! I cannot imagine how Ometepe must have looked like 20 years ago... so many changes in the last few years alone! And who knows how it will change over the next decade or so...

[...] Ometepe Nicaragua Photo Essay at Globetrottergirls (Great photos! Ometepe is one of our most favorite places in the world.) [...]