I admit that until the very minute we hopped on the bus to Palomino, we weren’t sure if we had made the right decision to go there, and if we would actually enjoy the small beach town. We had read in travel guides and blogs that the current was too strong to allow for swimming in the ocean, and our hostel of choice, the Dreamer Hostel, was fully booked because we had waited too long to make a reservation. 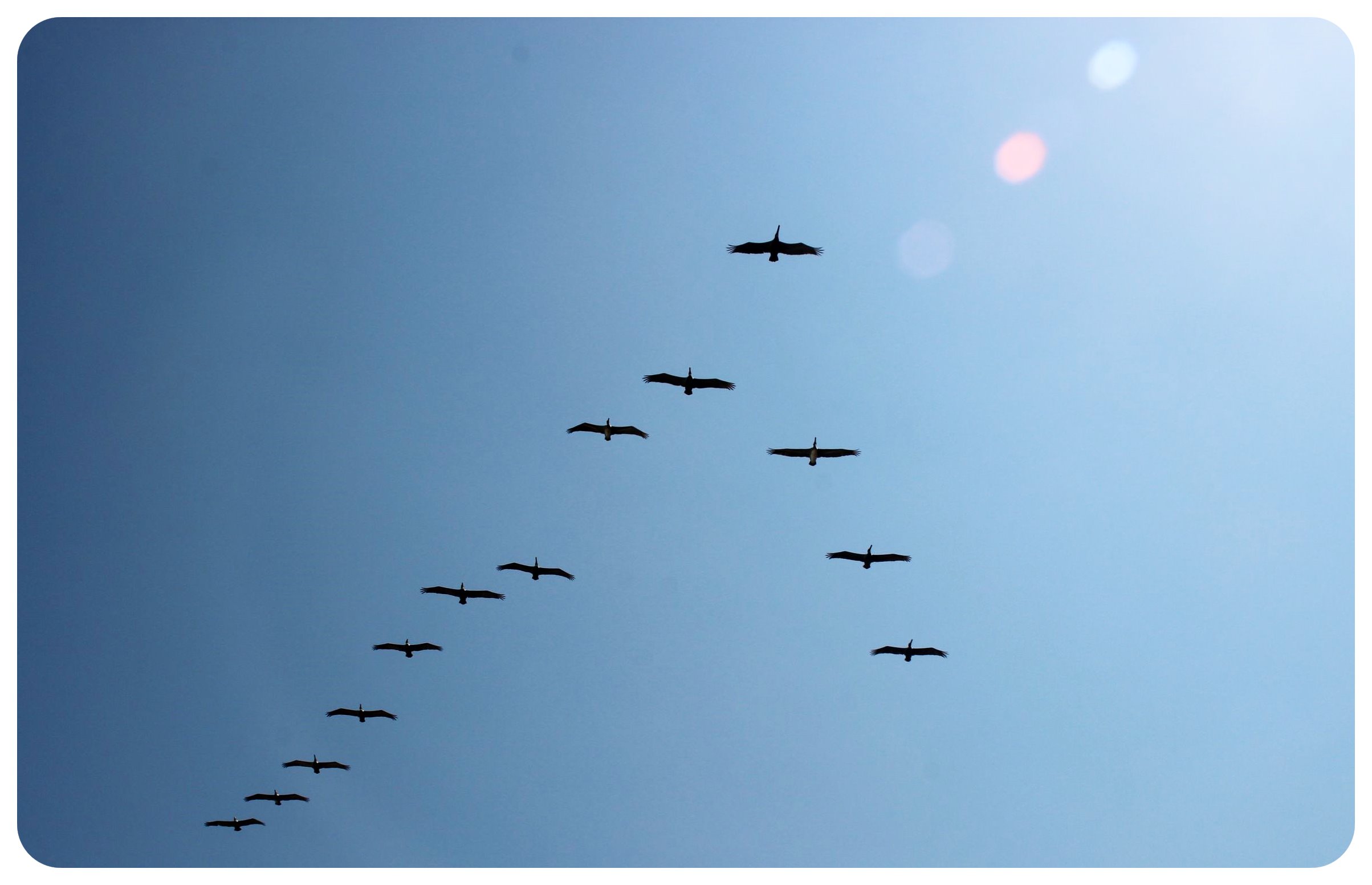 However, when I saw photos of snow-capped mountains just behind a palm-fringed, white-sand beach, it looked too magical to skip. 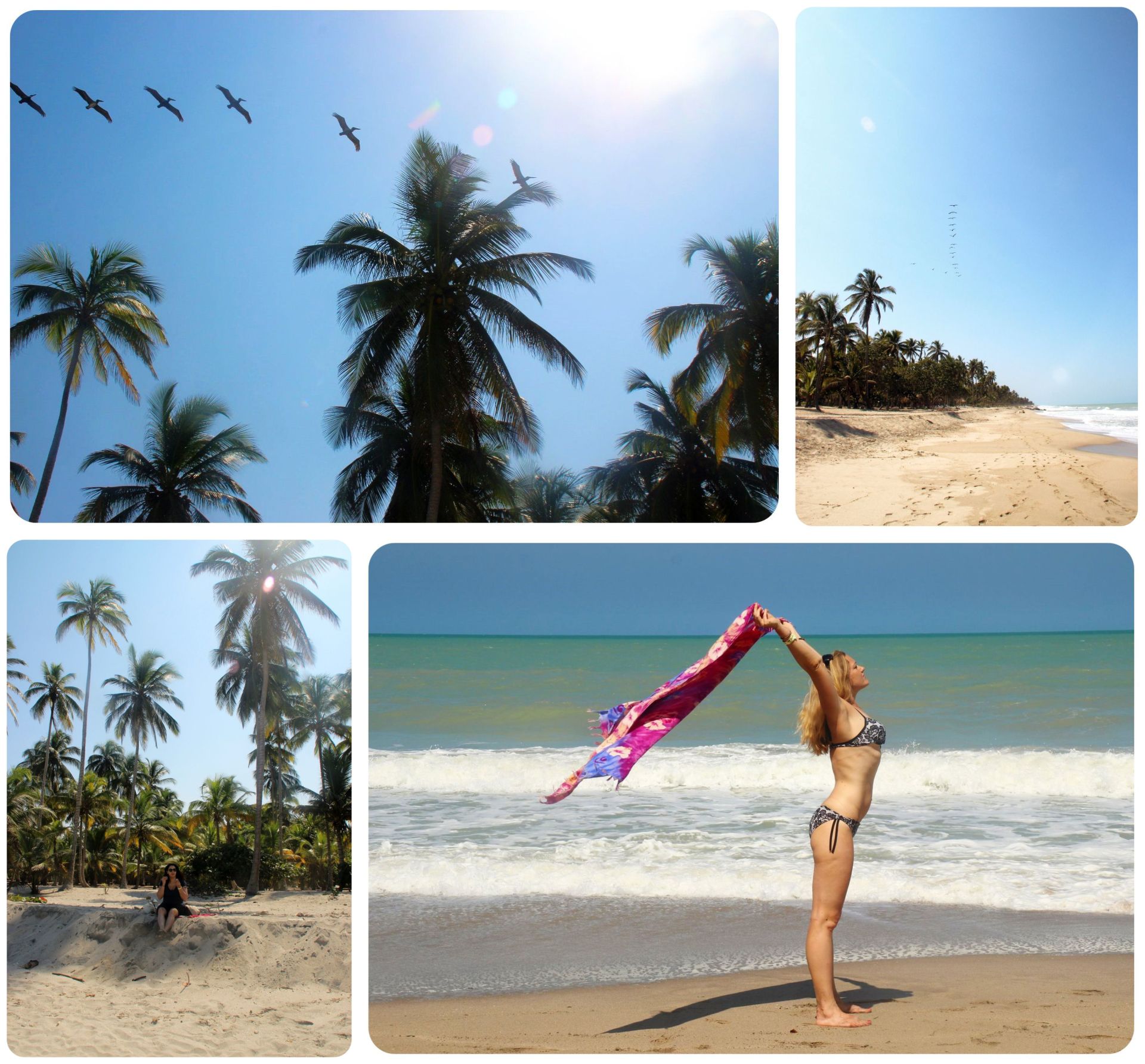 So we ended up booking a bungalow right by the beach – pricey, compared to the Dreamer, but we came here for the beach after all, so we wanted to be as close to the beach as possible. And that was the only good thing about the place: that it was a beachfront property. 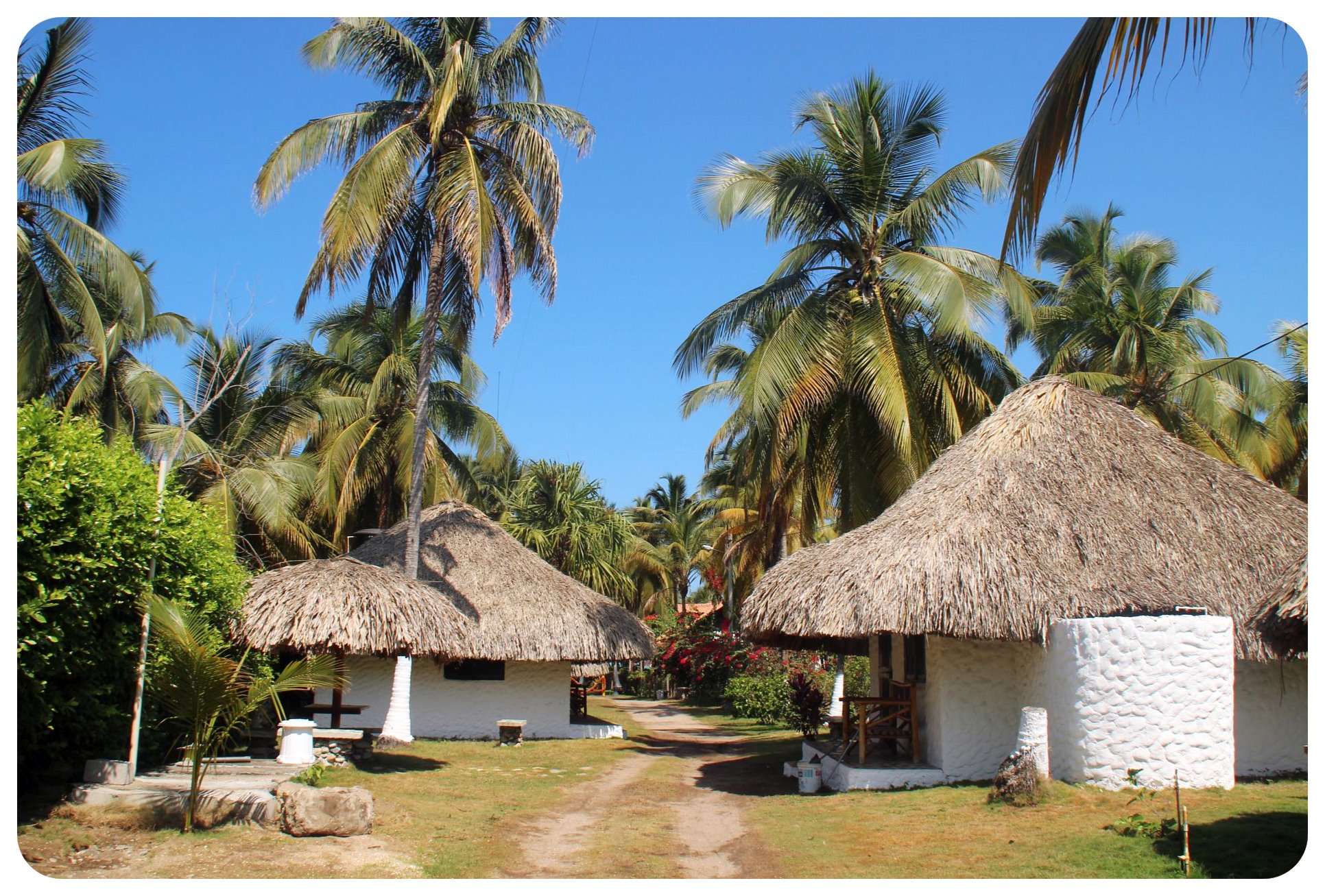 I eagerly tried to see the snow-capped peak I had seen in pictures as soon as we arrived, but I wasn’t lucky – the mountains of the Sierra Nevada de Santa Marta, the world’s highest coastal mountain range, never showed. 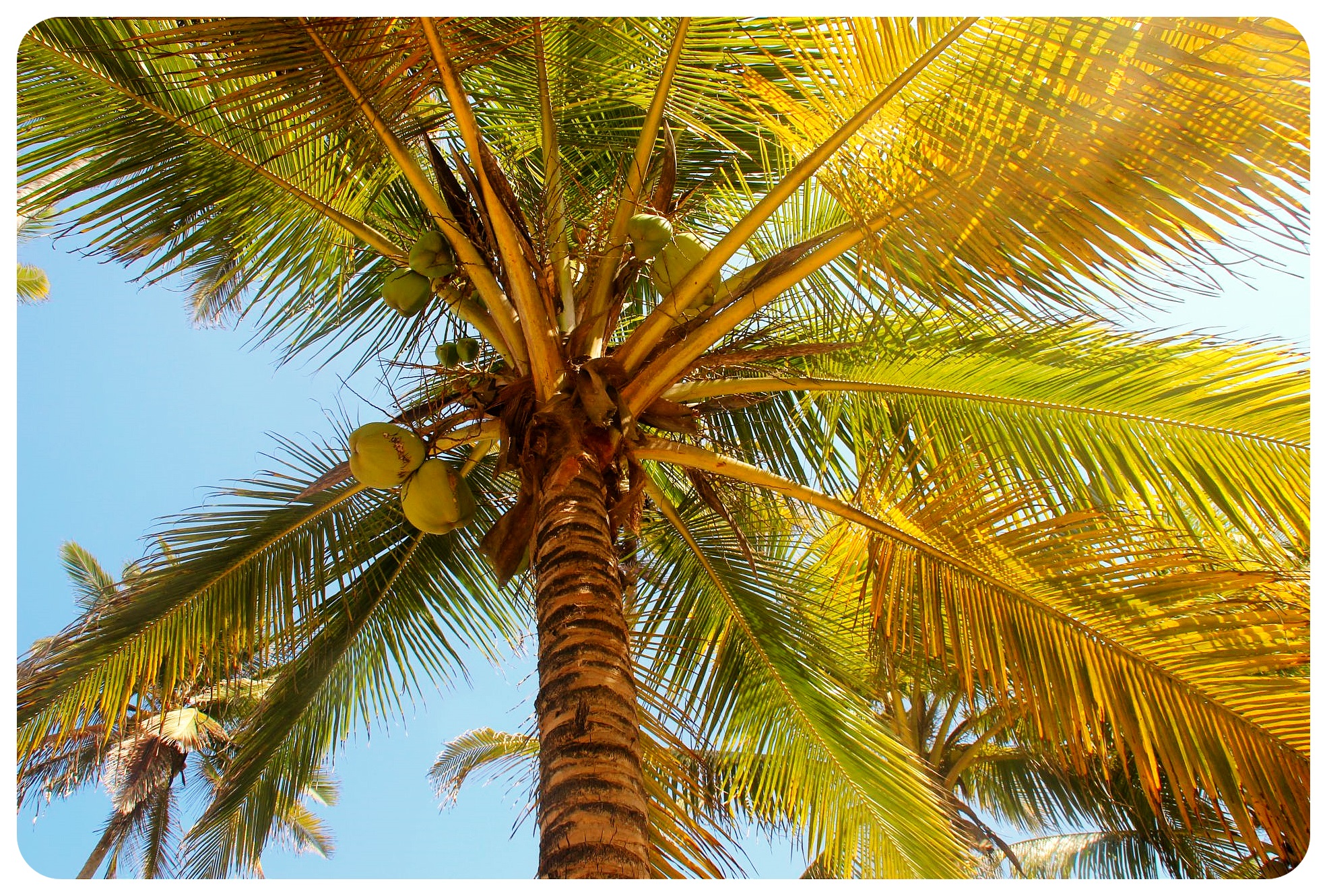 The true showstopper in Palomino isn’t the mountains anyway, but the tropical beach, which was postcard-perfect, begging to be put on the cover of a glossy travel magazine. And the best part? We felt as if we were the only people around – what a difference to Tayrona or Bahia Concha which both had been crowded. 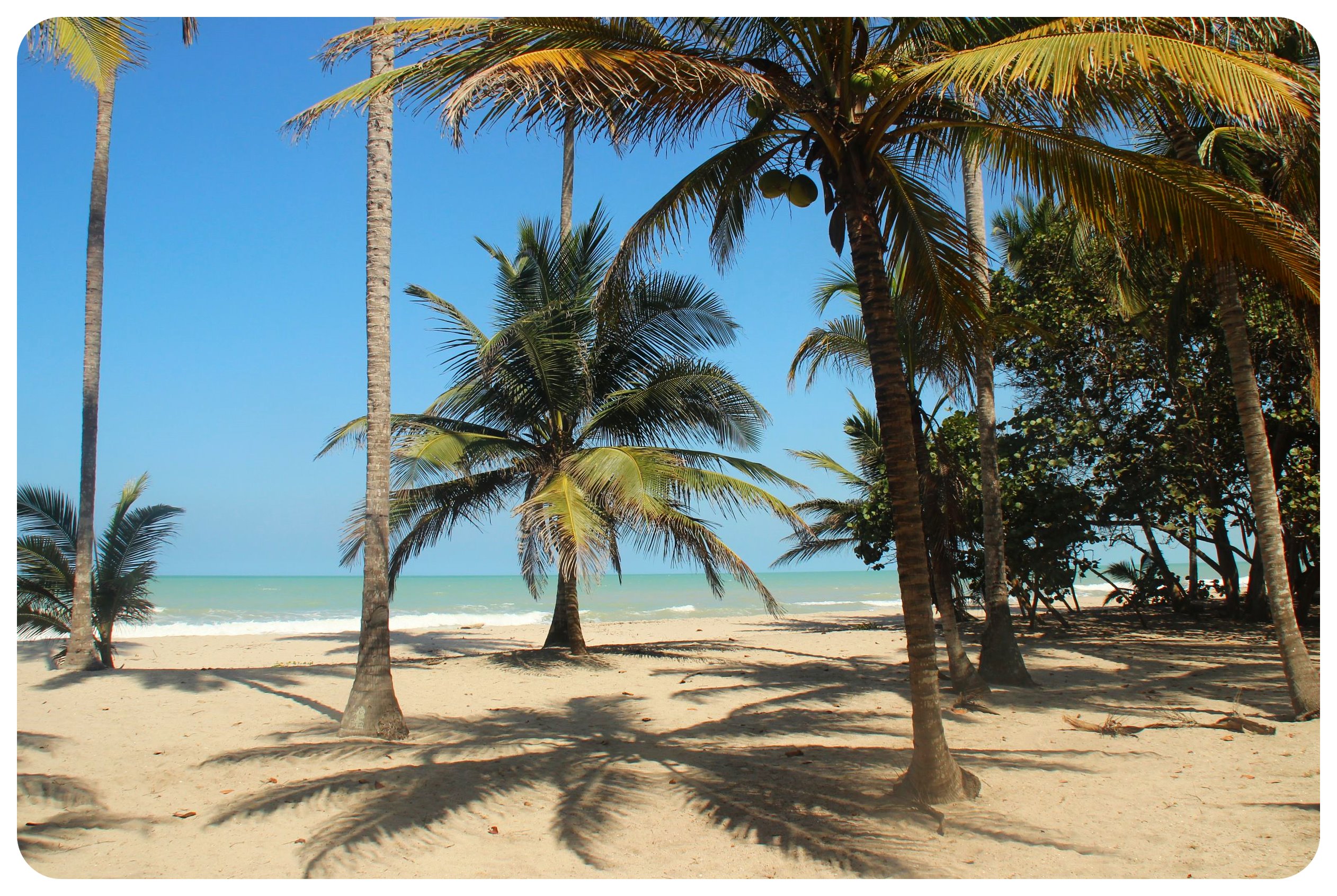 When we went for a long stroll along the beach we passed a handful of restaurants, a volleyball net, and a few hotels – that’s all there was! And those hotels? They were hidden so well behind the palm trees that they were barely visible. Had there not been the occasional beach loungers, it would have felt as if there were no buildings at all, only the deserted white sand beach, which went on for as far as the eye could see. 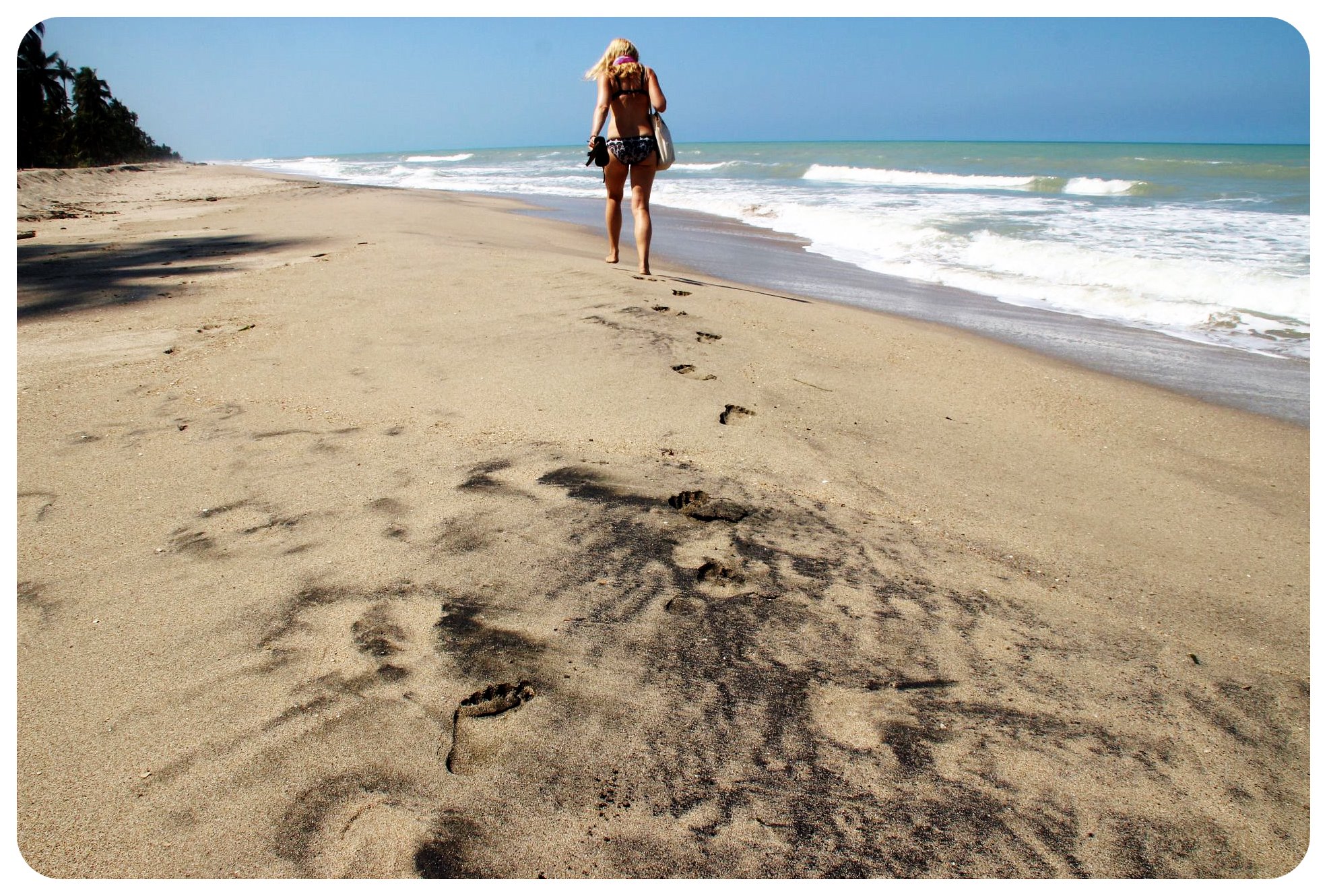 It was as if we had stumbled upon a secluded Caribbean paradise, and it reminded me of Little Corn Island in the sense that it was yet to be discovered, even though it had everything it takes to be a popular vacation spot (plus: with the current exchange rate between US Dollar and Colombian Pesos, it is super cheap!). 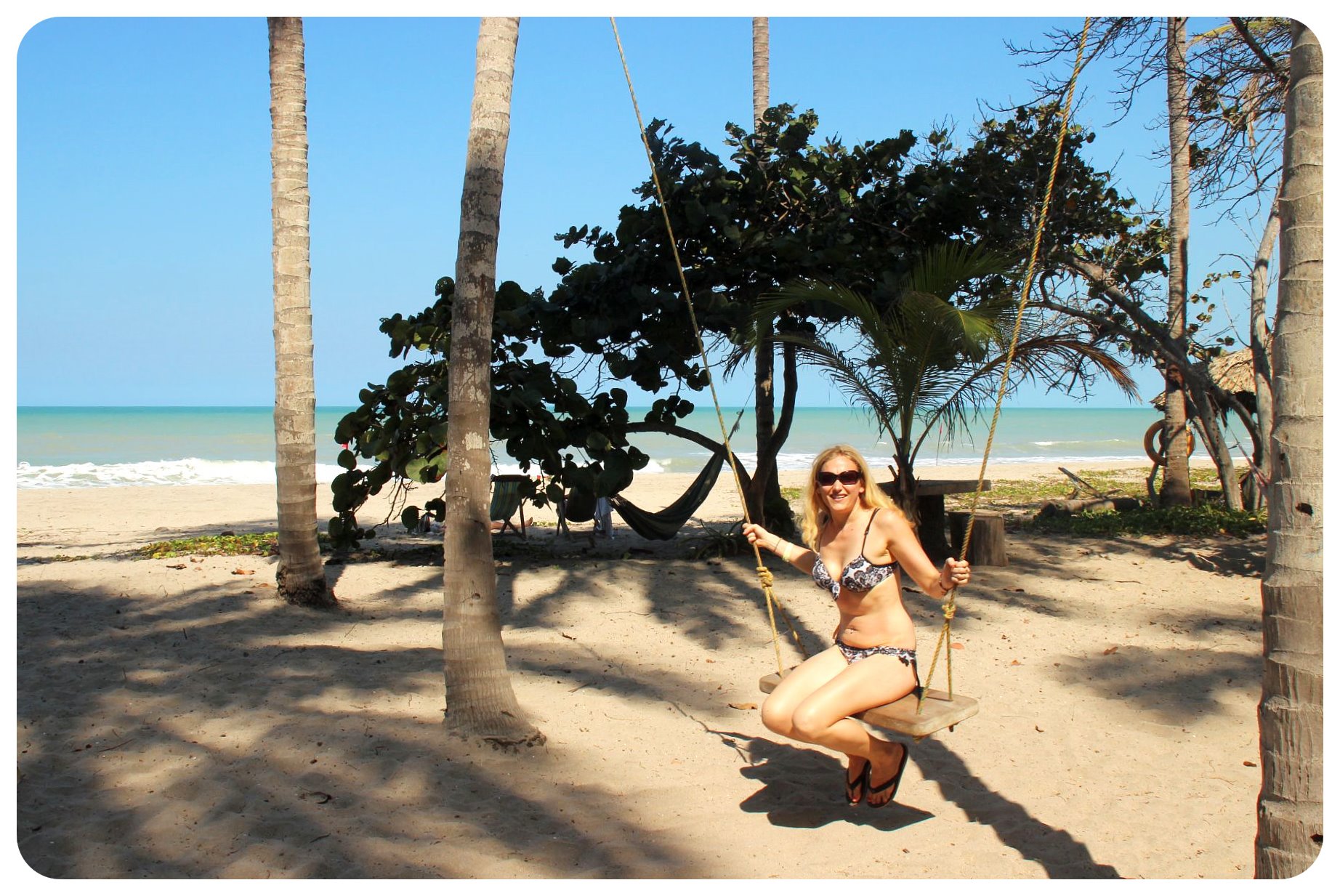 The guidebooks hadn’t lied though: the water was rough, and the waves scarily high. Almost no one was in the water, and I only took a few dips in the ocean to cool off. Palomino might not be great for swimming, but it is a perfect place to get away from it all and to enjoy solitude and tranquility in a paradise-like setting. 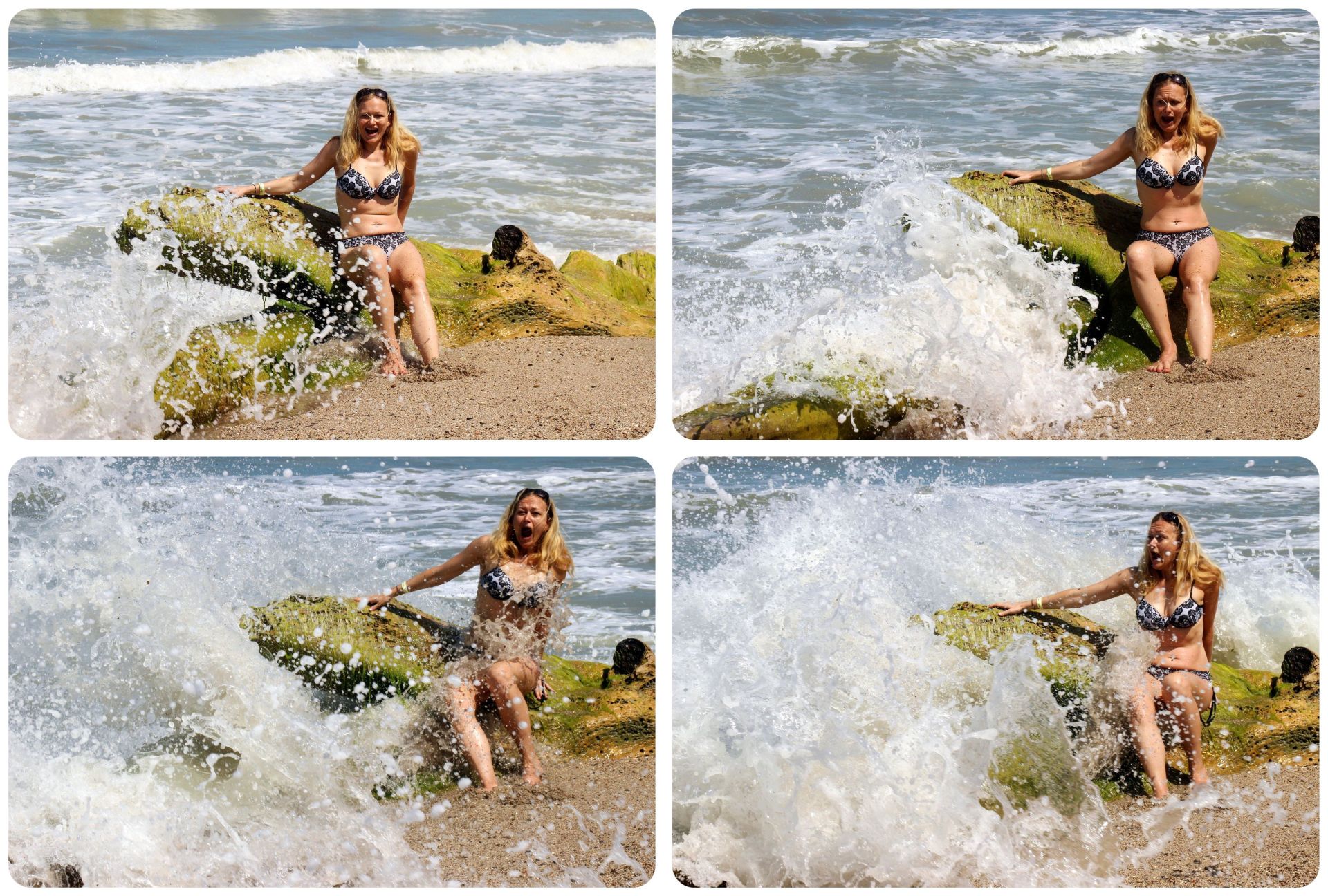 As we walked back towards the village, I was surprised to see several signs for yoga and even a vegetarian restaurant, La Sirena, where we had lunch later on. Even in this tiny beach town far off the tourist path you could pursue a holistic lifestyle. I guess that also means that the secret is out and Palomino is expecting to see an increase in tourists. 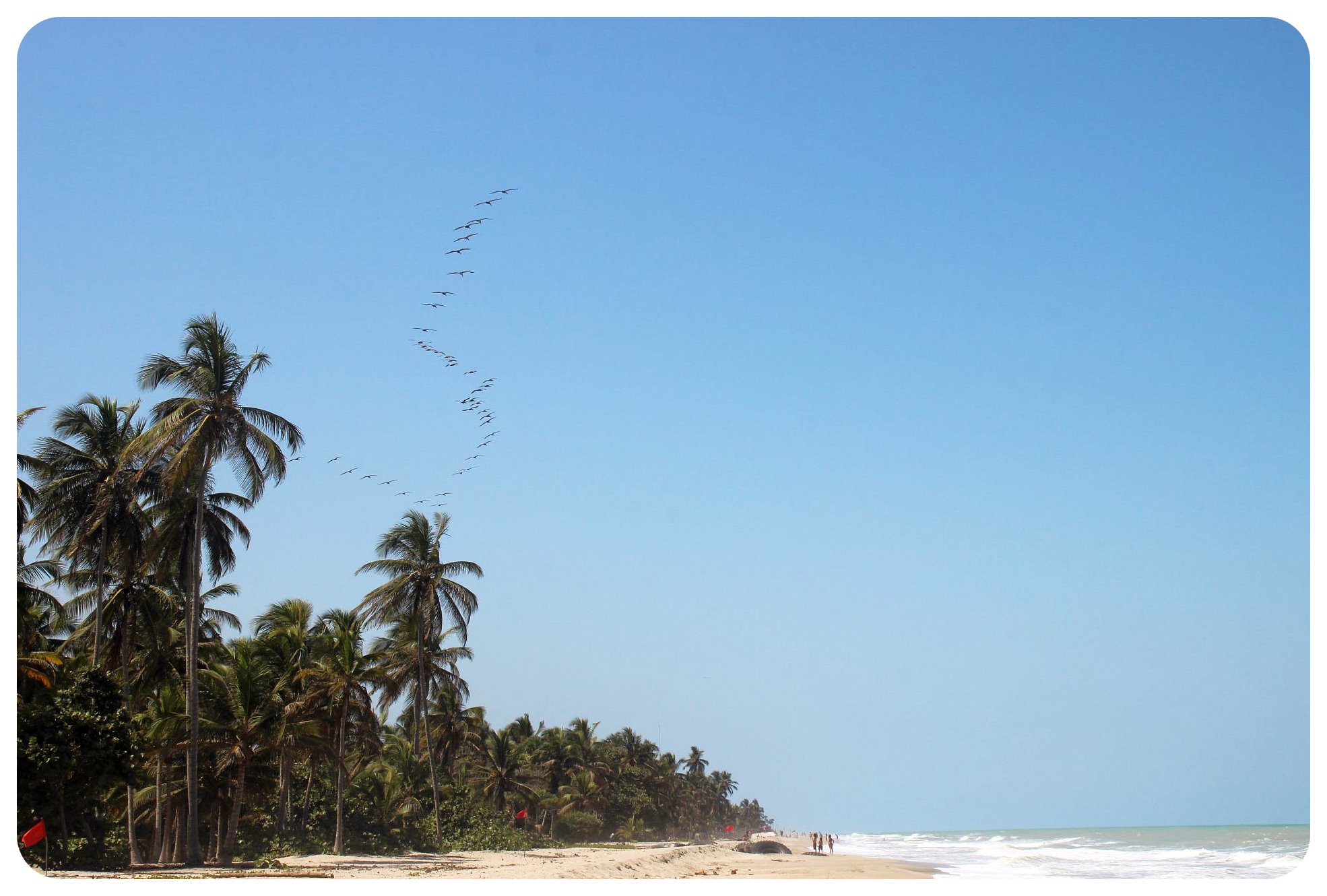 A few years ago, I learned, there were only a couple of guesthouses and a few places where you could rent a hammock on the beach, now there were several eco-lodges and fancier hotels, but still only about two dozen, most of them further away from the core of the village. 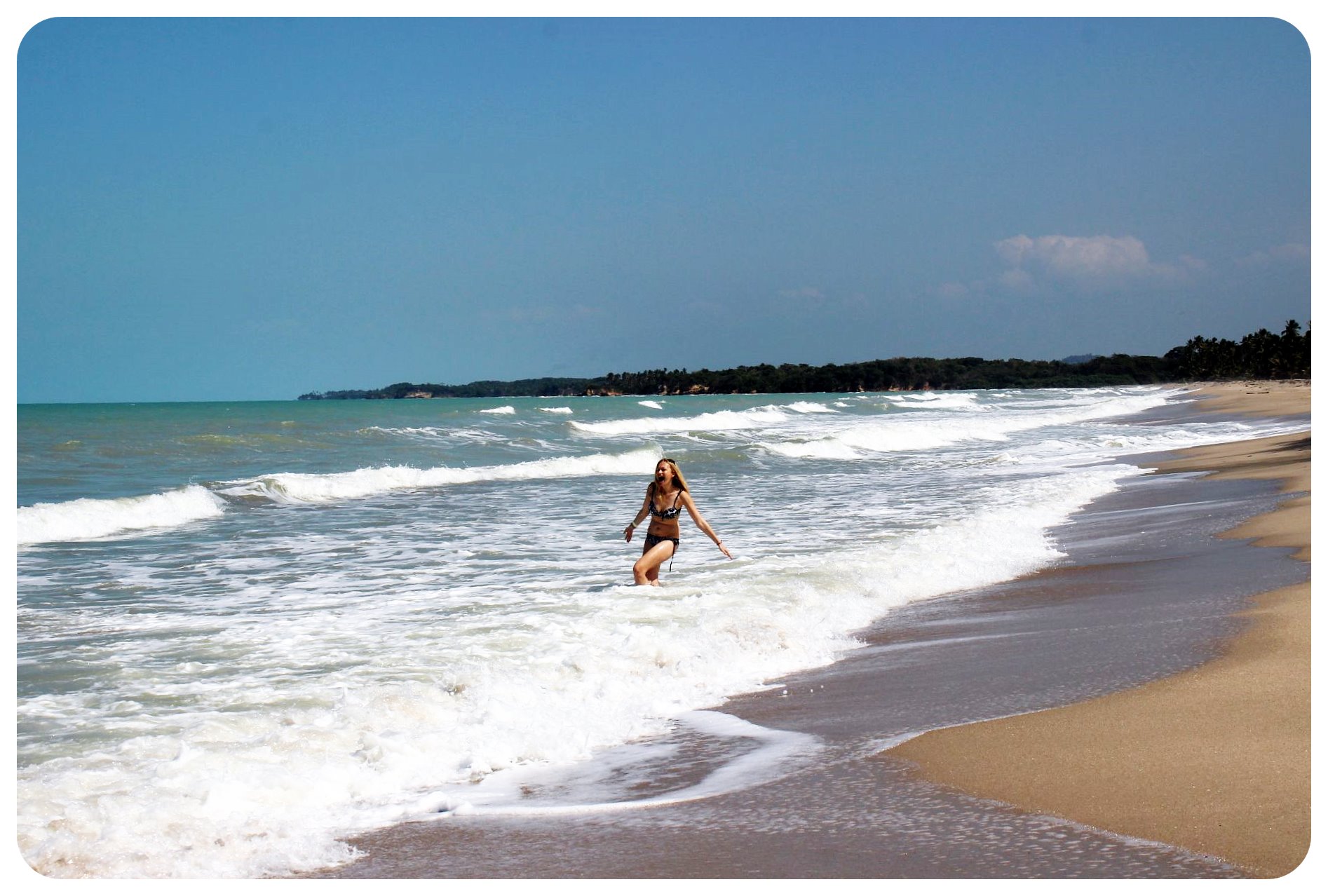 Upon returning to our cabaña, we had a surprise waiting for us: all of our belongings were strewn across the floor, everything had been pulled out of pockets, little bags, compartments of our backpacks and small daypacks. Somebody had broken into our bungalow. My heart dropped when I saw the mess: all of our valuables – credit cards, laptops, passports, camera gear and our Kindles – were in my backpack. I saw the contents of the bottom compartment of my backpack all over the tiled floor, but then I saw that the main compartment was still locked. 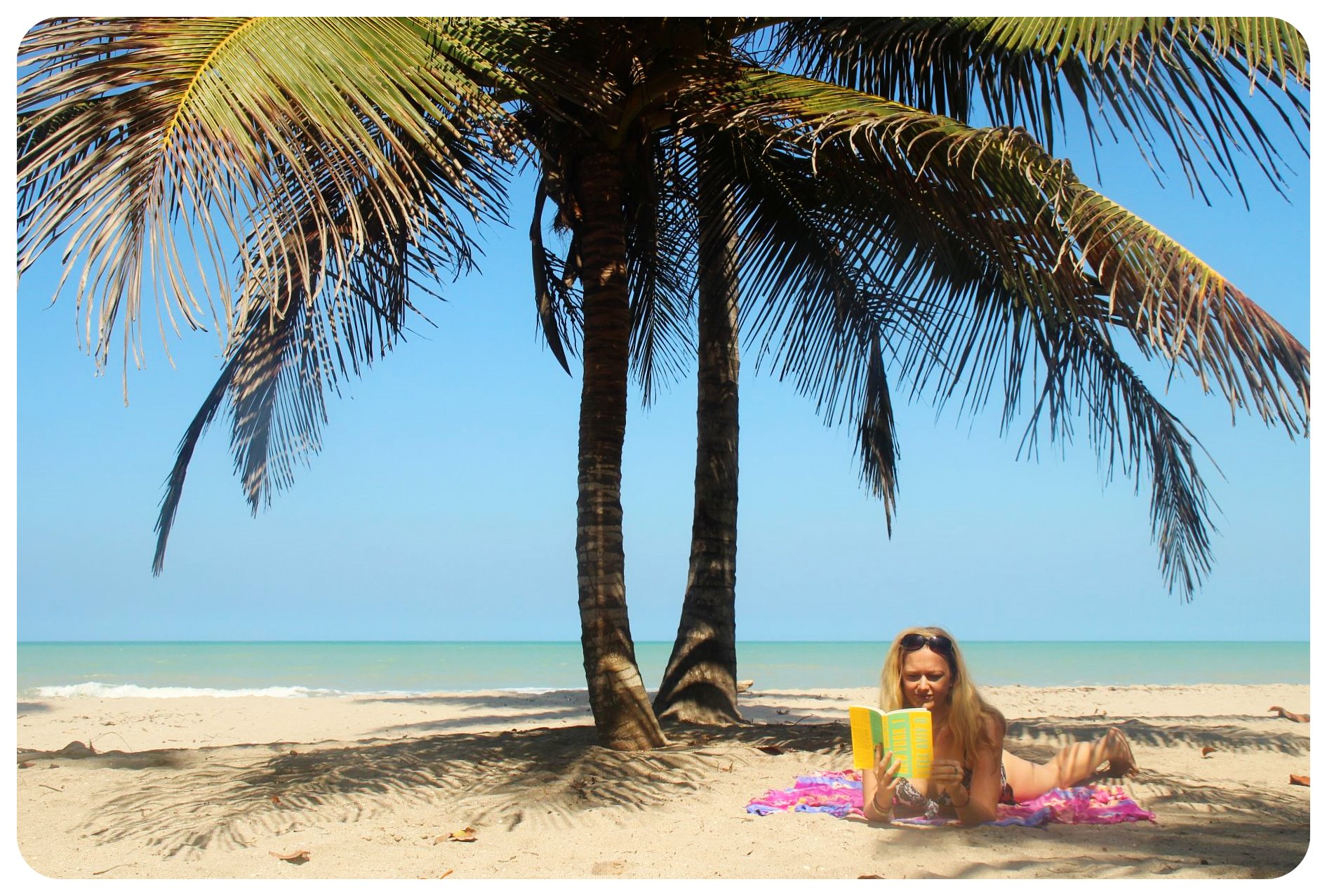 I couldn’t believe how lucky we were. Thank God I was carrying a small padlock with me to lock up my backpack – and that I had actually used it! Someone must have interrupted whoever had made their way into the bungalow, because it seemed like they’d left in a hurry. Our electronic chargers had been compiled on the bed but weren’t taken. All that was missing was an emergency $20 hidden in a small cosmetics bag. But another $80 in cash, also hidden in a small bag, wasn’t found, even though the thief had searched that bag. 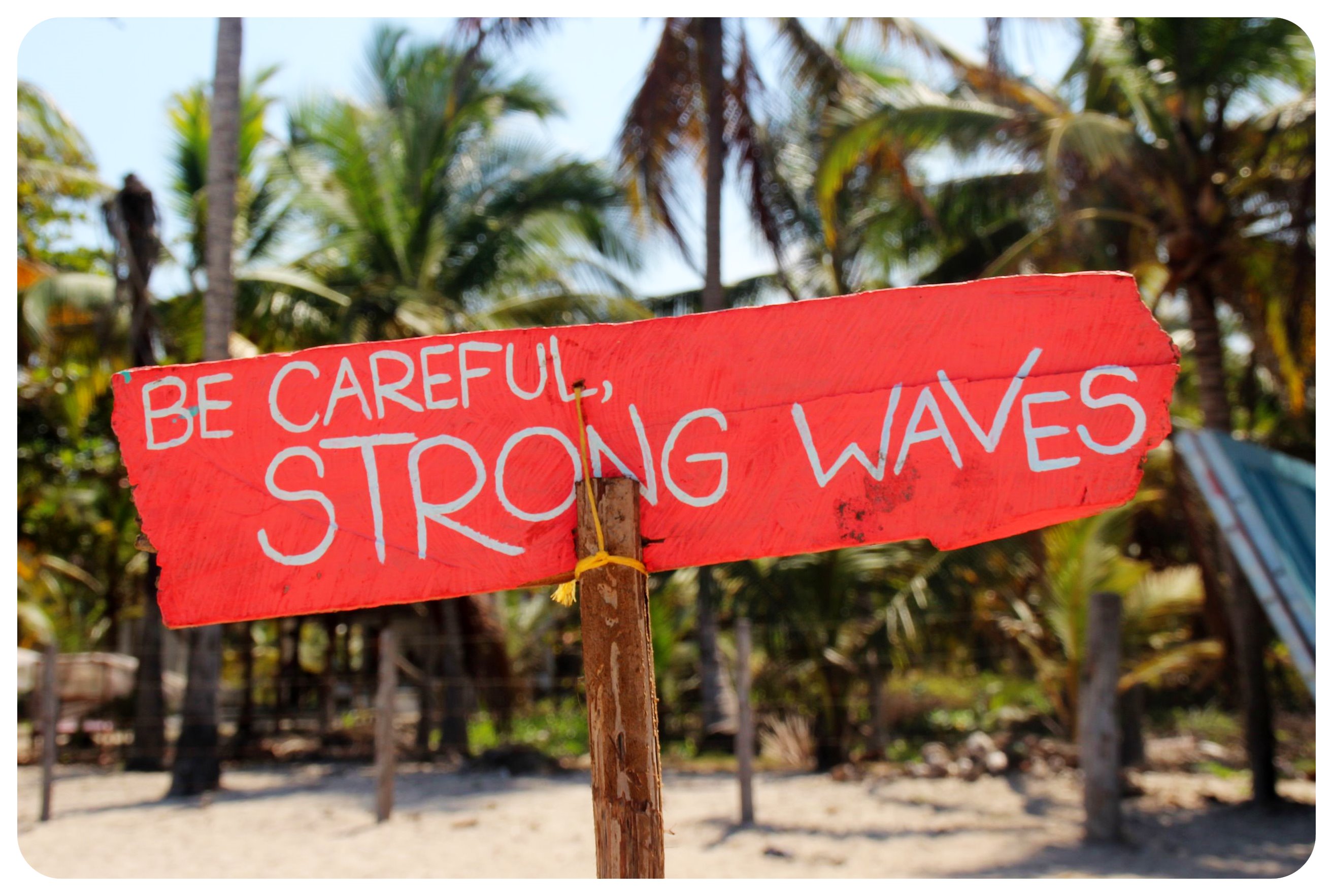 Despite the fact that our losses were minimal, I was shaken up. Just thinking about how differently this could’ve ended (and ended our trip!) made me feel sick to my stomach. I needed a drink. 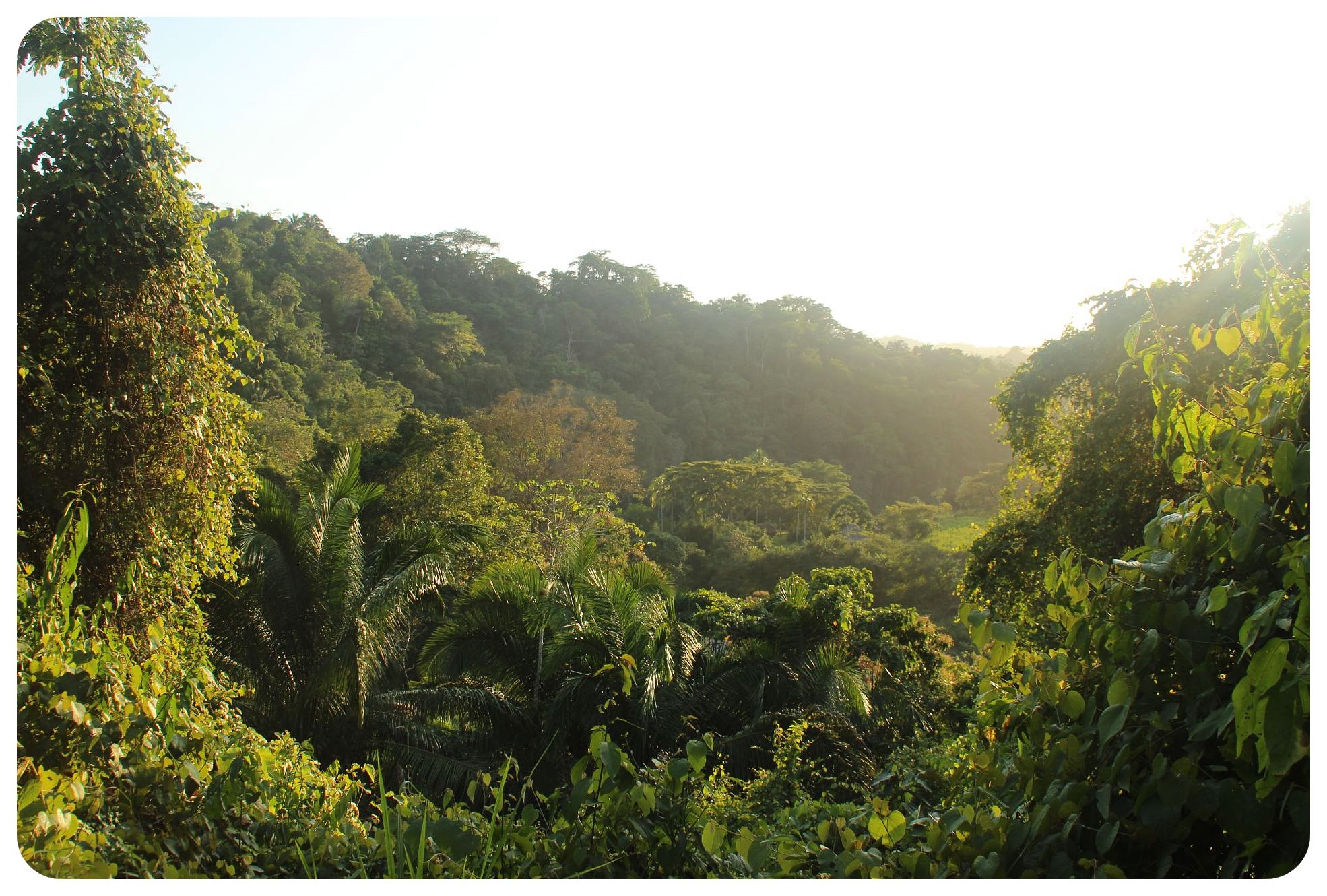 Instead of a drink, we opted for a late afternoon river tubing session. Because the current is so strong in Palomino, the popular alternative to swimming in the ocean is slowly floating down the river that eventually flows into the ocean. 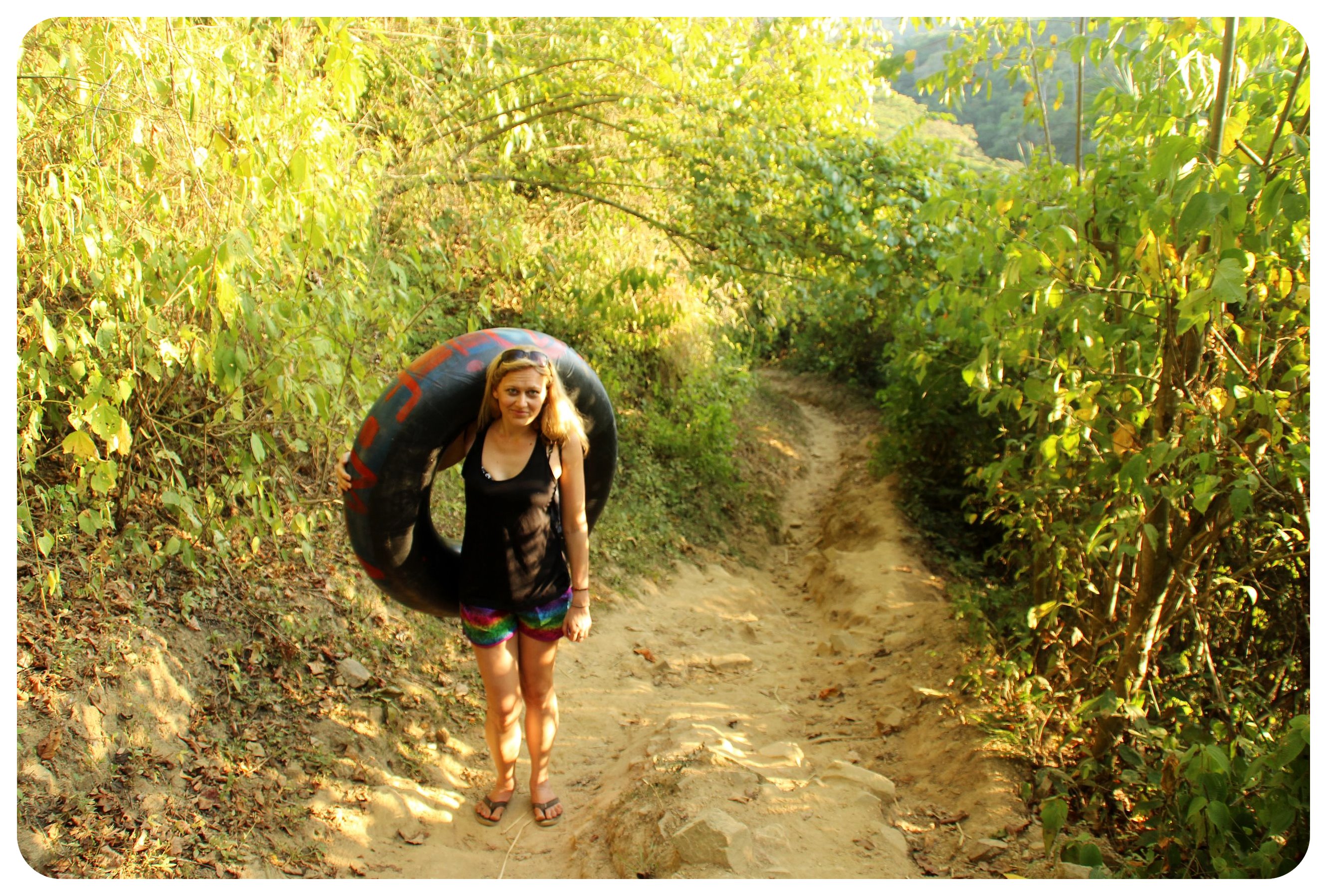 Armed with two giant tires, we hopped on the back of two moto taxis (the only way to get around Palomino) and were dropped off at a dirt path in the forest shortly after. Little did we know that we had to climb a mountain first – it was a 25-minute walk to the river, up a steep and slippery dirt path, and then back down the hill on the other side. By the time we had made it to the river, we were covered in sweat and ready to get into the water. 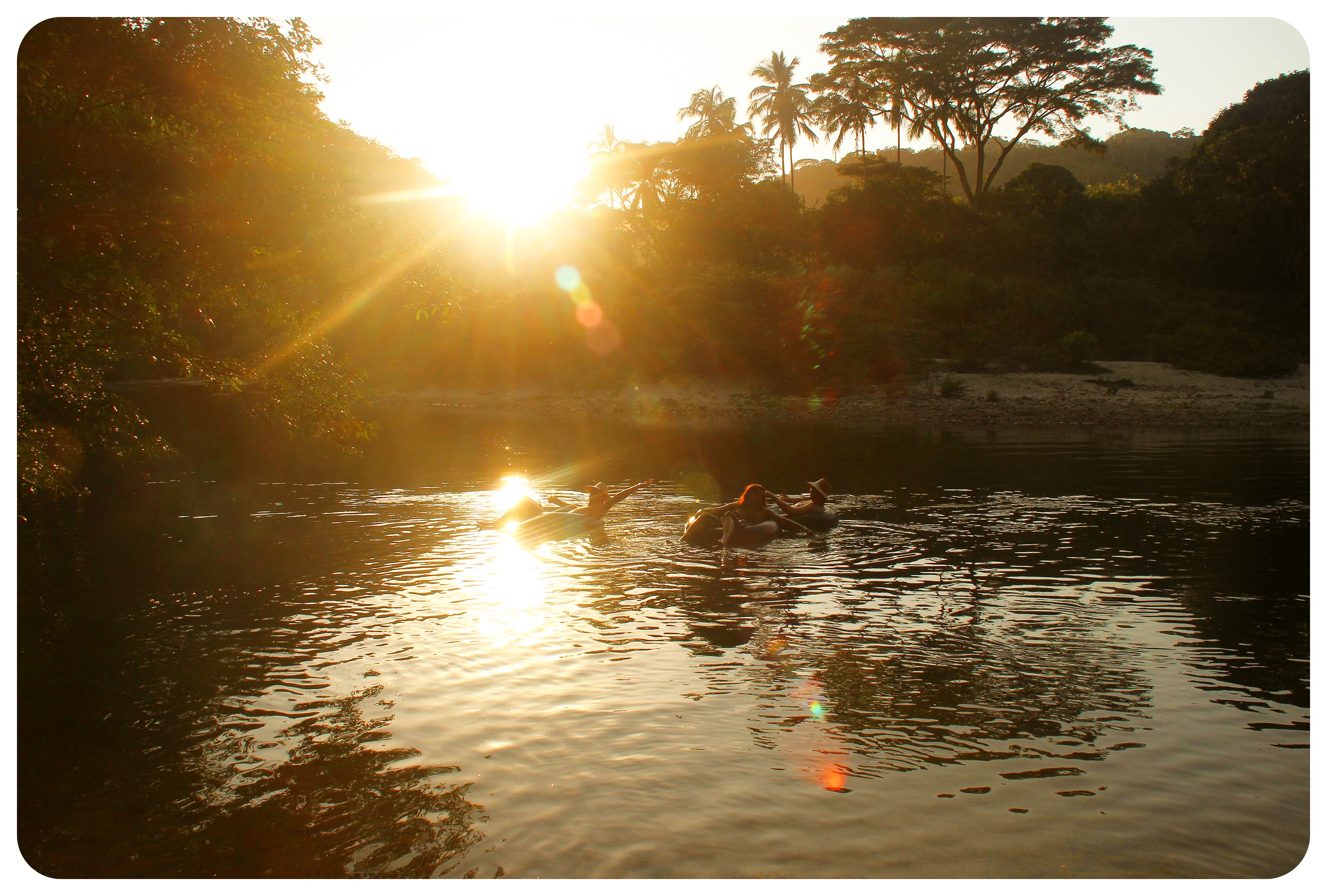 Once we started floating, the stress from the bungalow break-in was quickly forgotten – the scenery was absolutely stunning! We couldn’t help but relax while we were slowly moving down the river, marveling at the jungle forests around us and listening to the sounds of the jungle. 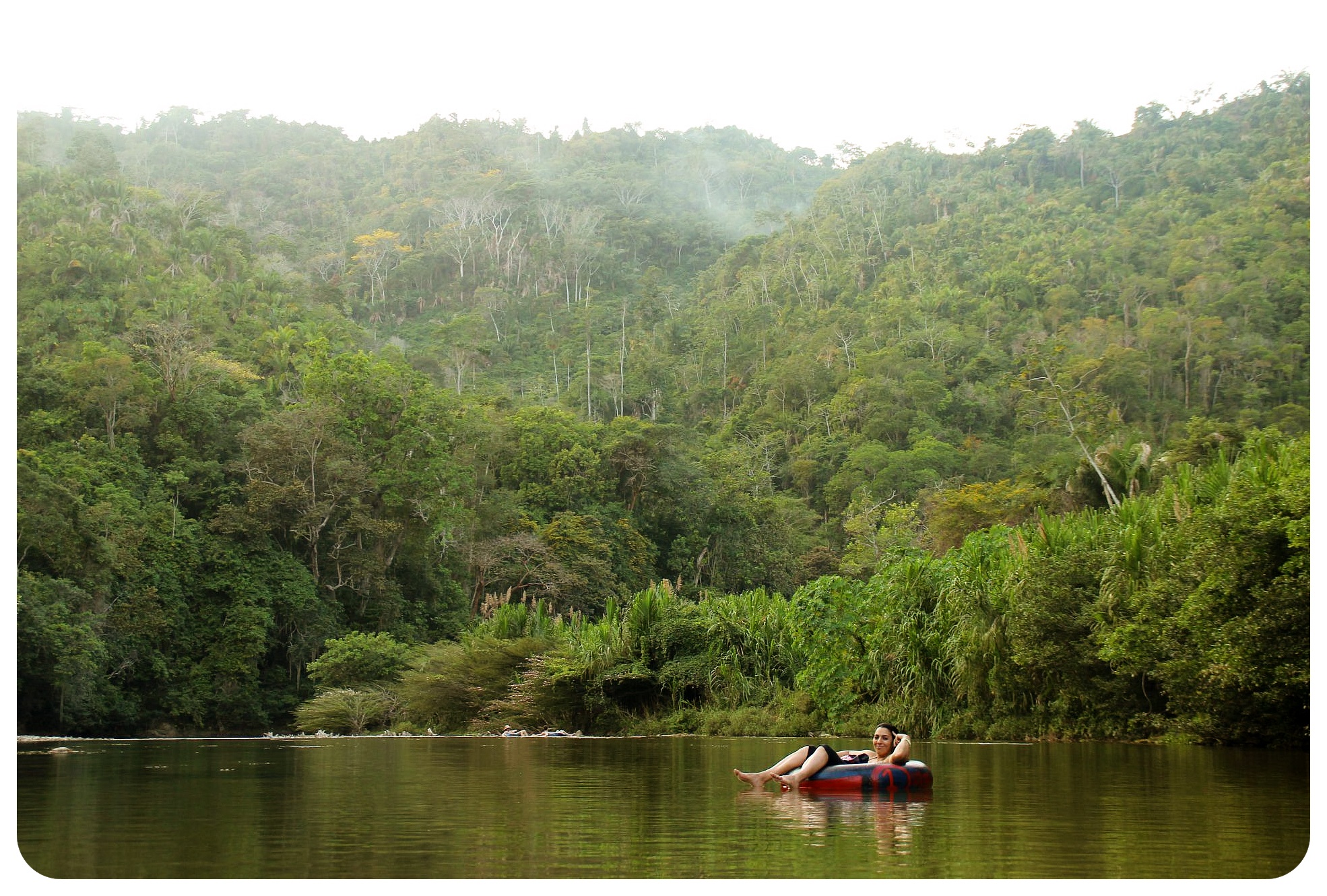 Unfortunately we miscalculated how long it would take us to get down to the ocean, or even to the bridge we were 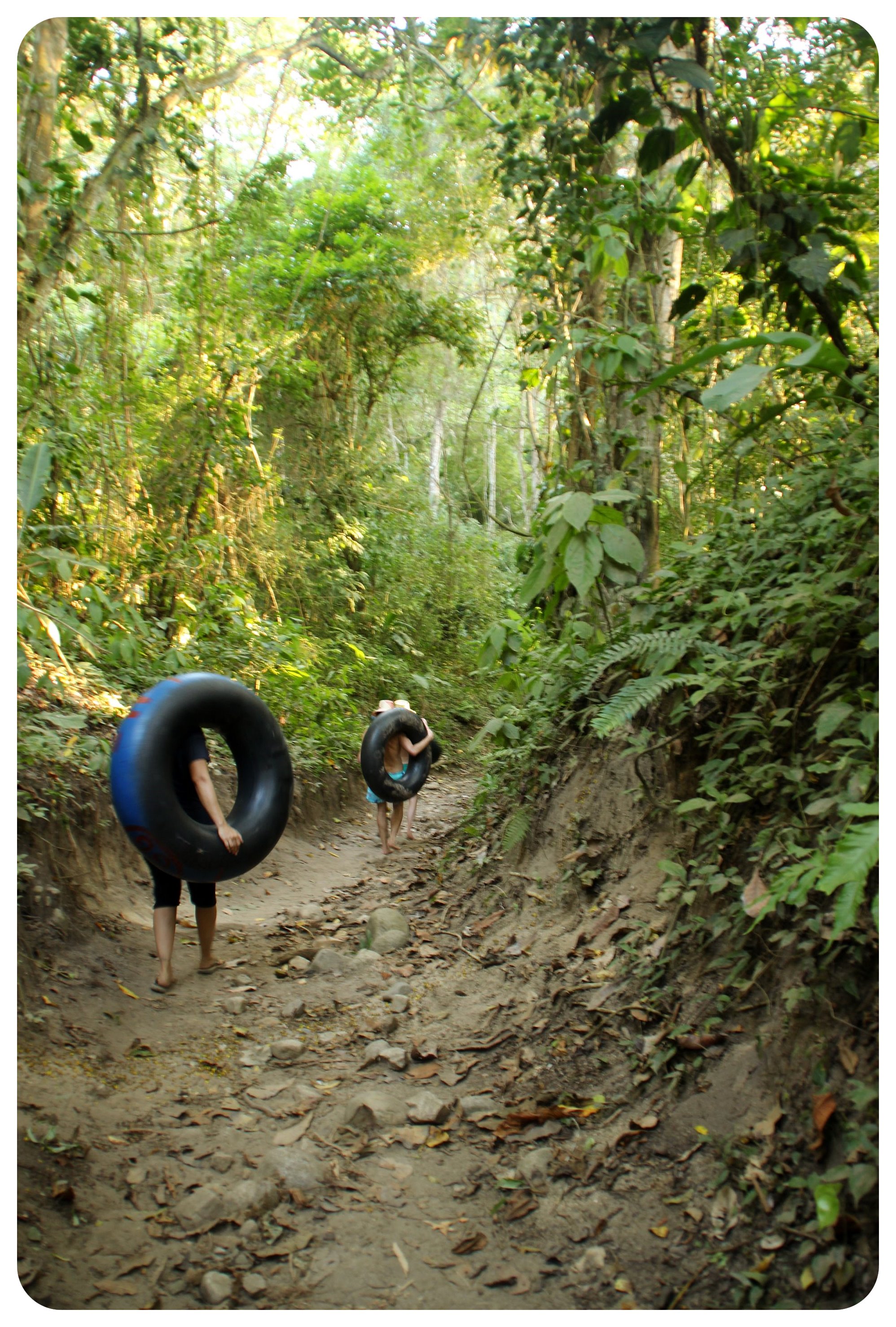 told to get off at should it get too dark. Suddenly, we were floating down the river in complete darkness, and the only light we had was the moon shining bright in the sky. A little hysteria panic ensued when we had to walk through the river in the pitch black darkness (river monsters are a real thing, no?) to find the path that would lead us back to the main road. The nerve-wrecking ending of our tubing adventure was something we could have done without on this already tumultuous day, but it didn’t take away from the amazing experience of our afternoon on the river.

I highly recommend tubing when you go to Palomino – that alone made the trip there worth it for us. A friend of mine who had been to Palomino a few months prior had told me she loved it so much that she ended up spending a whole week there, and while that would’ve probably been too long for me, I could see how she got sucked into the relaxed lifestyle of morning yoga, a reading session in a hammock, fresh fruit juices for lunch (they serve them in one liter buckets at the Dreamer Hostel!), and lazy afternoons by the pool before the obligatory sunset beers on the beach. 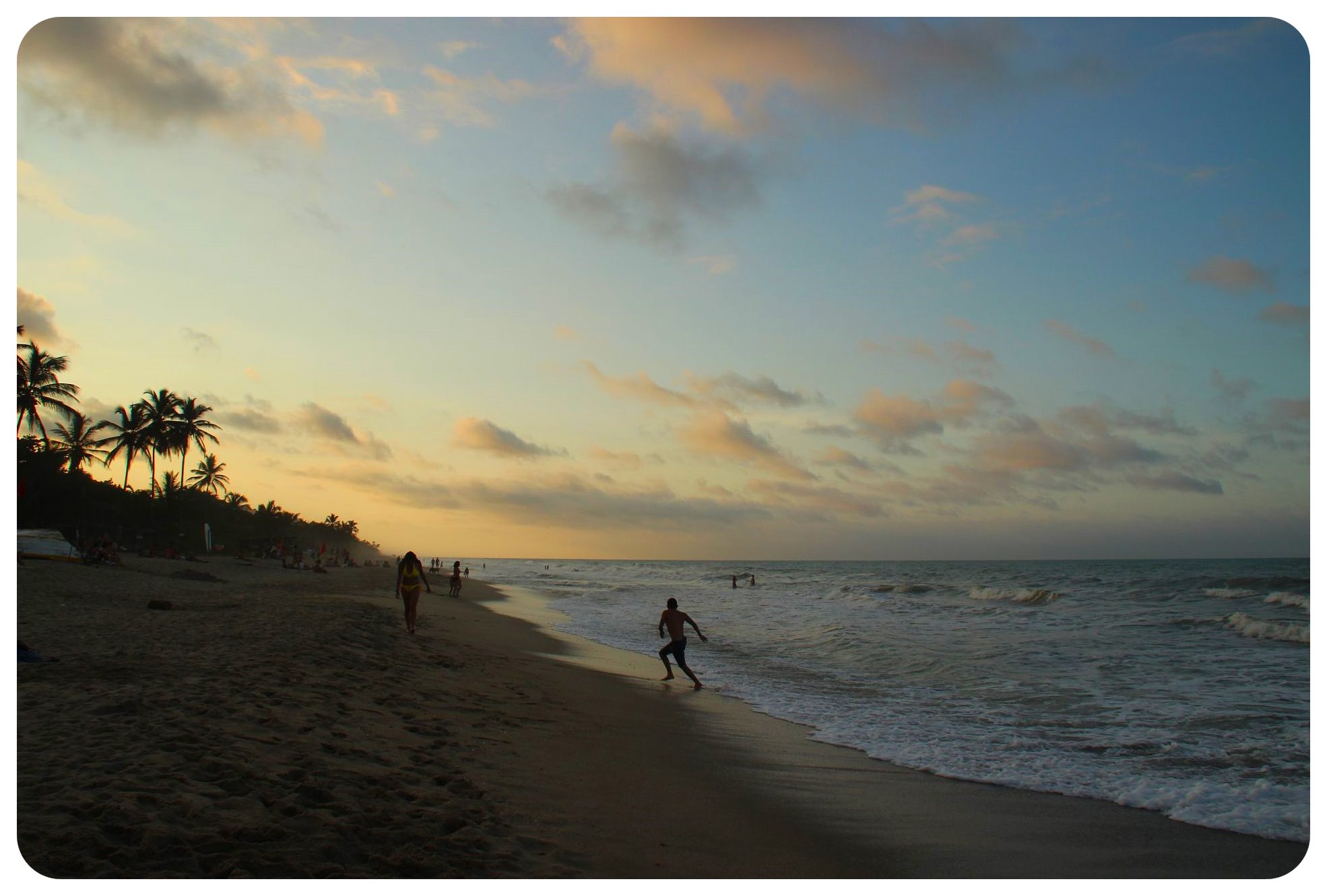 How to get to Palomino

Marsol offers a direct shuttle service from Cartagena (COP75,000 /US$26). If you don’t want to walk all the way to their office (quite far from the historic center), most hostels can book a ticket for you. If you take local buses you pay considerably less but you’ll have to change buses in Baranquilla and Santa Marta.

The buses let passengers out on the main road and from there it is either a twenty minute walk down to the beach or a five minute ride on a moto taxi (the fixed fee for that is COP3,000 /US$1). 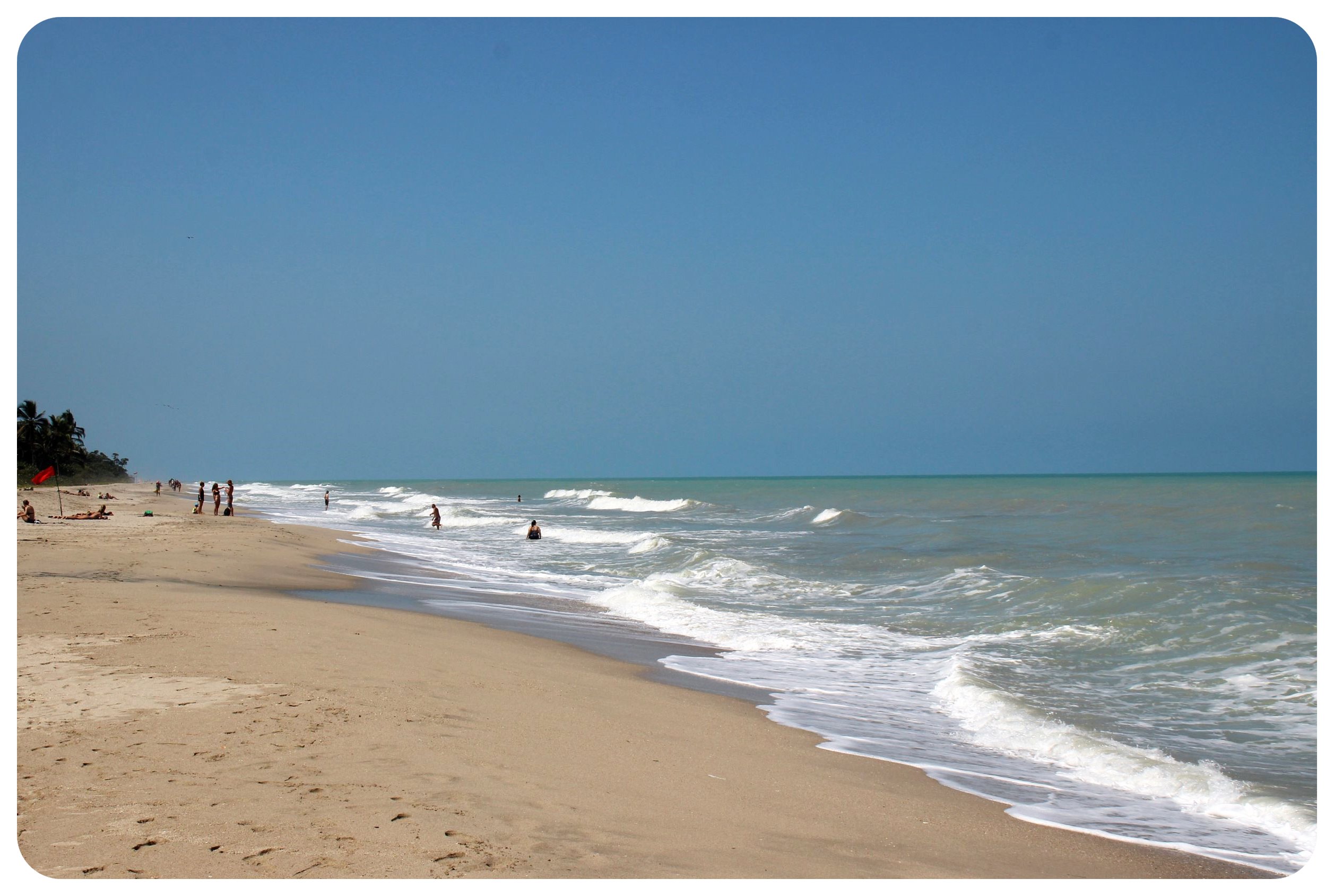 Where to stay in Palomino

The Dreamer Hostel – We spent the evening there even though we didn’t stay there, and it so made me wish we hadn’t waited that long to book our accommodation. It is right by the beach, has a great pool and good wifi.

The Tiki Hut Hostel was the other hostel in Palomino that came highly recommended to us.

If those two happen to be fully booked, like it was the case for me, check out a full listing of available hostels, hotels and guesthouses in Palomino on Booking.com

A brand new addition to Palomino’s hostels is the Italian-run Primaluna hostel which has a swimming pool, authentic Italian pizza and great reviews. 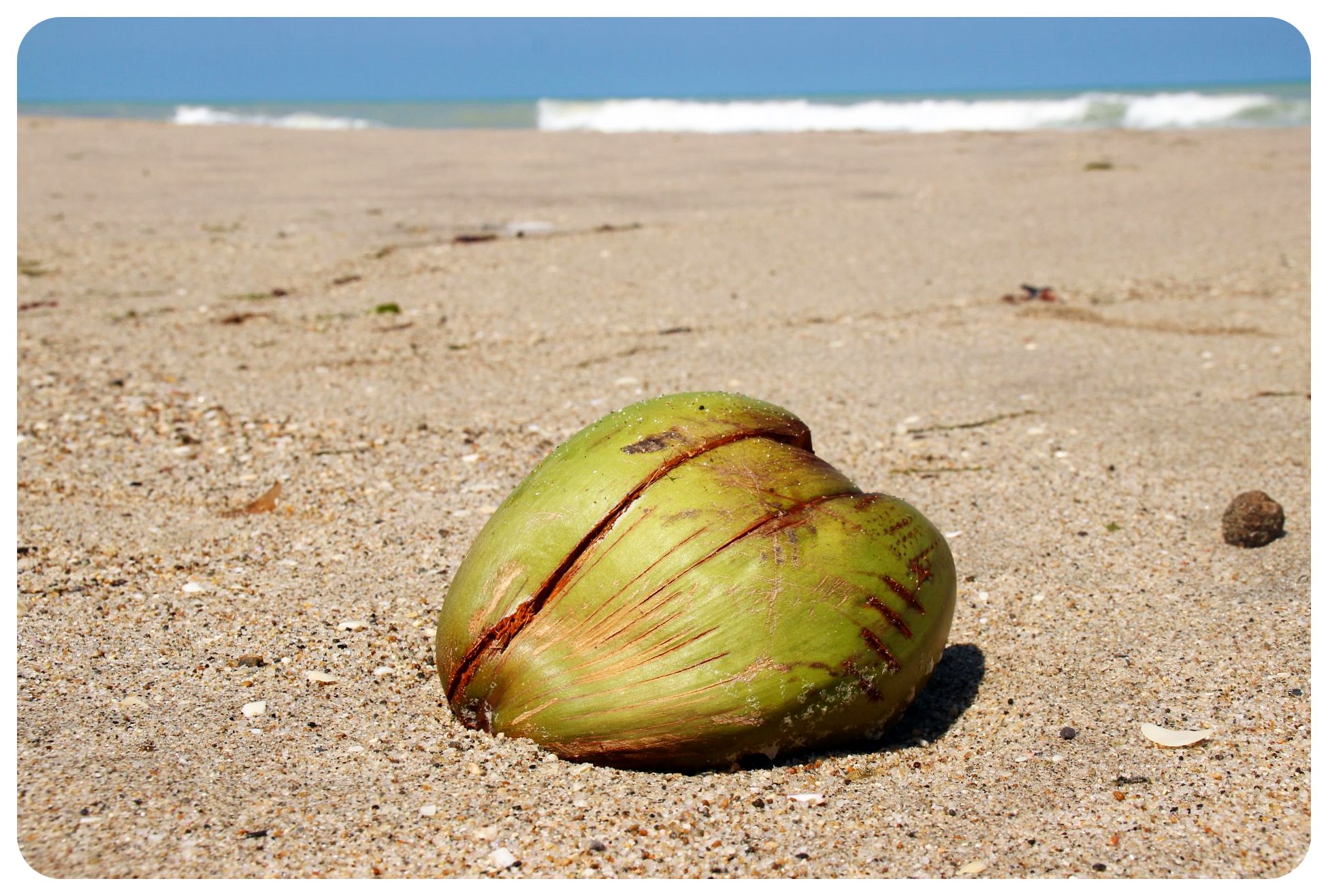 There are no ATMs in the village, so bring enough cash. 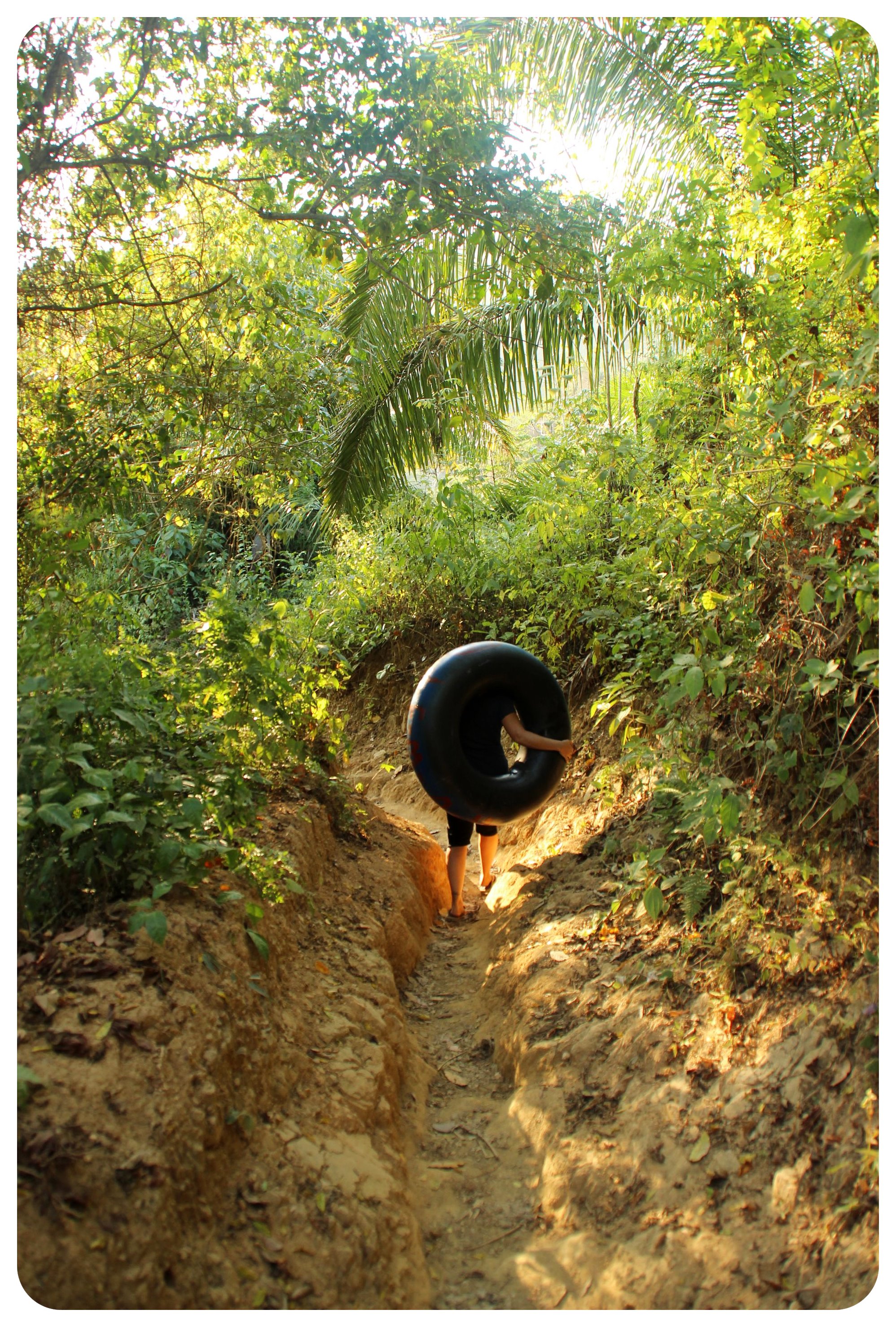 River tubing is COP20,000 /US$6.80 per person (for as long as you like, so it makes the most sense to rent the tires in the morning). You might find cheaper tire rentals on the main road of Palomino, away from the beach. It takes about 1.5 hours from the starting point in the jungle down to the ocean.

Where to eat in

Most restaurants are located on the main road, and not on the beach, and I found every meal I had in one of the beach restaurants mediocre- except for my meal at the La Sirena vegetarian restaurant.

Despite having my bungalow broken into, I wouldn’t say Palomino is more unsafe than other places in Colombia. It seemed more like somebody had seized an opportunity, this wasn’t an organized crime or even an experienced thief. 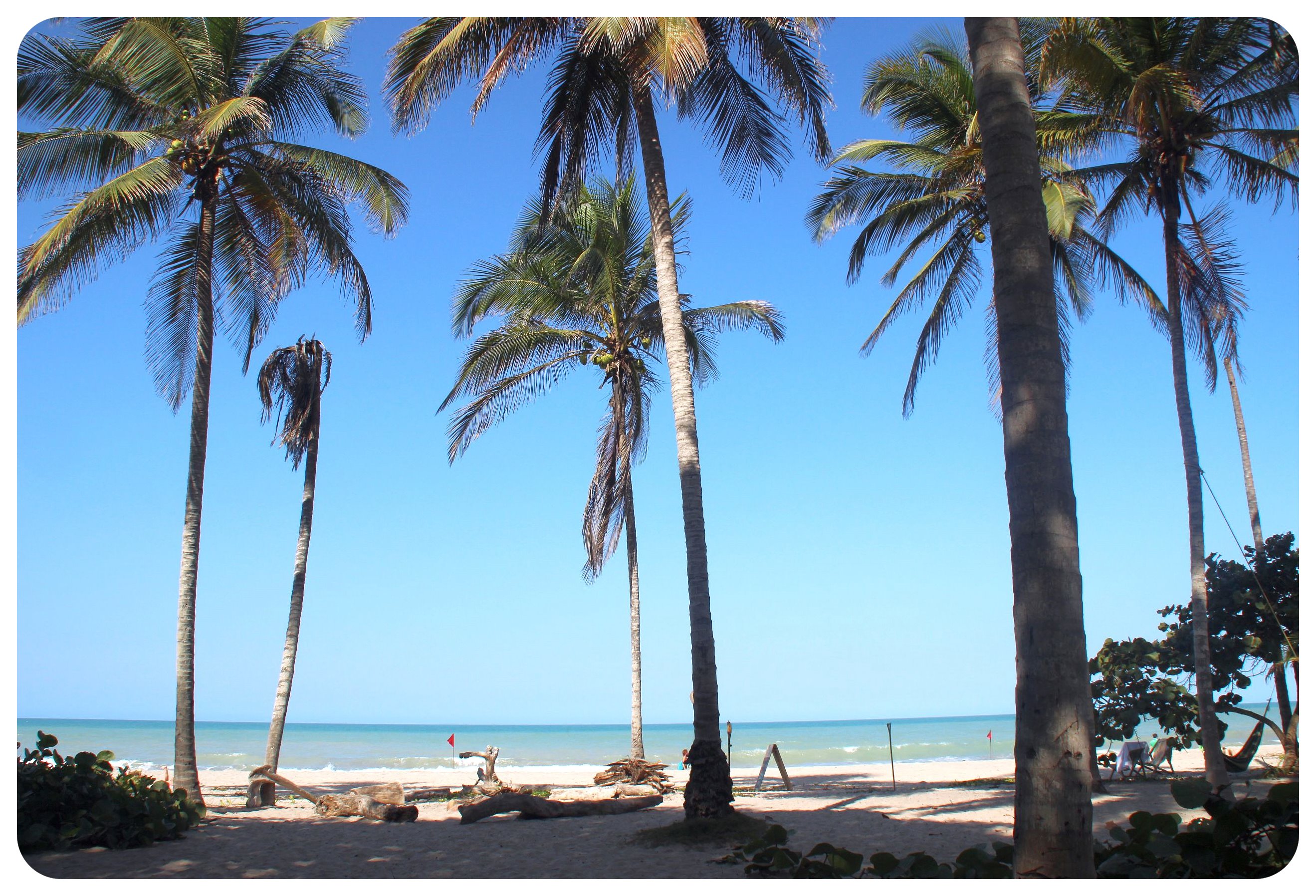 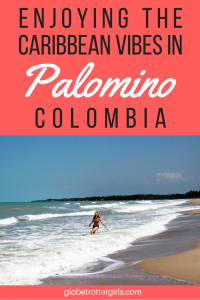 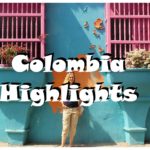 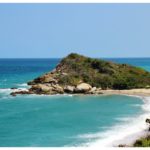 Tayrona, Colombia: Where the Jungle Meets the Beach
Click here to cancel reply.

Great Post, Dani! Thanks for sharing. Loved how you share your travel story! And, the pictures are simply breathtaking. Awesome blog! Glad I found you guys today! You might also like my blog: www.holidayporch.com/blog Cheers and enjoy the rest of the week!

Caribbean Vibes and a Giant Scare in Palomino, Colombia | SortStyle.com