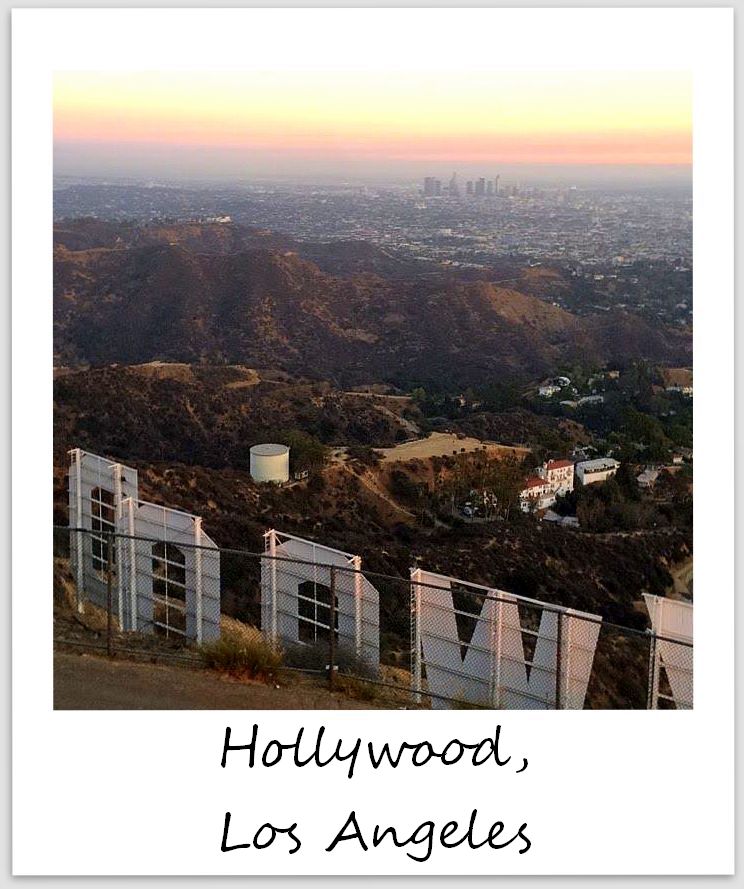 This week I finally made it up to the famous Hollywood sign – a hike that I’ve been wanting to do for a while. After two failed attempts (traffic, cloudy skies), I found myself scrambling up the rocks to a small hill above and behind the actual sign, which me and my hiking buddy reached after about an hour’s walk, just in time for a brilliant sunset. You can’t get to the sign by car, the only way to get up, close and personal with these giant white letters that have become an American icon, is on foot or by horse, and you can’t get in front of the letters, only above them.

Funnily enough, the sign didn’t have any association with the movie industry when it was put up in 1923. Instead, it was supposed to promote local real estate during a time when the Hollywood Hills weren’t the prime real estate location that they are today. Back then it still read Hollywoodland. After years of deterioration, Hugh Hefner started a fundraiser to save the sign, and $250,000 were raised to restore the sign that had fallen into disrepair.

It used to be a bit tricky to get up to the sign until a few years ago, unless you were a local and knew your way around. The Trust For Public Land, that is in charge of protecting the sign and the surrounding lands, has made it much easier now to find the right paths and not get lost in the relatively remote and rugged southern side of Mount Lee, on which the sign is located. There are now several hiking routes: the Mt Hollywood Trail (short and moderately difficult), the Canyon Drive Trail (longest route), and the Cahuenga Peak Trail (the shortest, but most challenging). We took a shorter version of the Mt Hollywood Trail, which can be started at the Griffith Observatory (3.5 miles round trip) or at Sunset Ranch at the northern end of N Beachwood Drive. The ranch offers guided horse rides up the sign, by the way.

The hike is pleasant, with sweeping views over parts of L.A., Glendale and The Valley from various viewpoints along the way – but the star of the show, the sign itself, stays out of sight for the most part. We started our hike at Sunset Ranch, but next time I’d start at the Griffith Observatory for a longer hike and better views of the sign itself.

When you get to the sign, the most astonishing thing is seeing how big these letters actually are: each letter is 45 feet tall (14 meters) and all of them next to each other are 350 feet (110 meters) long! My height compared to it: 5.8 feet.

If you’re thinking about climbing the security fences that fence off the sign, be warned: the charges are no joke. Trespassers face a $1000 fine, restitution to the City agencies involved in the trespasser’s arrest, a one-year probation period and 20 days on a Cal Trans highway crew.

You can find more information on the hikes to the Hollywood sign here.

Polaroid Of The Week: L.A. At My Feet | SortStyle.com