The floating markets of Bangkok with their colorful produce on adorable wooden boats floating through the city’s canals, majorly impressed us. When I heard about entire floating villages in Cambodia, I knew we had to take a trip out to see it for ourselves. I mean, what can an entire floating village even look like, how does it even work? All I honestly expected was a gathering of scattered houses on stilts along the lake shore, close to water but on solid ground. 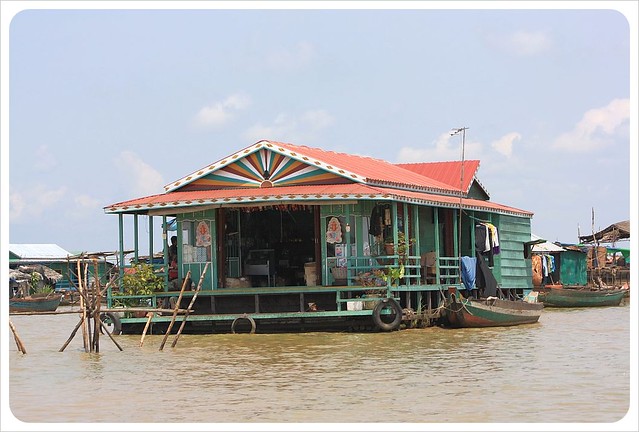 What we found instead was a thriving community on Lake Tonle Sap, a lake big enough to be mistaken for the ocean. It took a 20-minute boat ride sloshing through a small tributary to reach the village. During the rainy season, the trip can take twice the time for the villagers to reach the dry land at the dock. 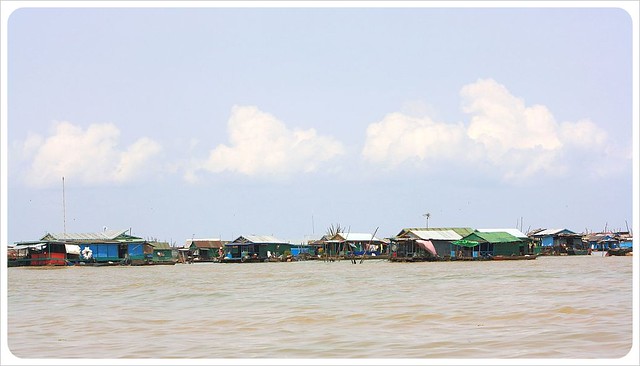 Most of Cambodia’s floating villages are based on Lake Tonle Sap. Though this is the largest freshwater lake in South East Asia, this unique body of water changes drastically in size throughout the year. In the rainy season between June and October, the lake is massive, flooded with water from the Mekong River. In the dry season, from November to May, the lake shrinks to such a degree that its flow reverses to deposit water back into the Mekong. 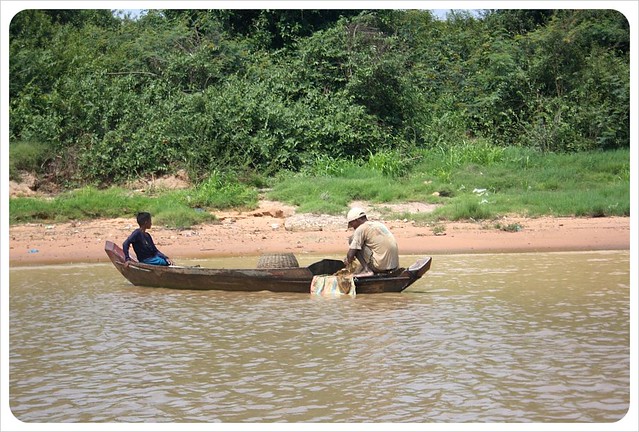 Tonle Sap is 16,000 square kilometers and nine meters deep during rainy season. In the dry season, that shrinks to 2,700 sq km and between 1 – 2 meters deep. 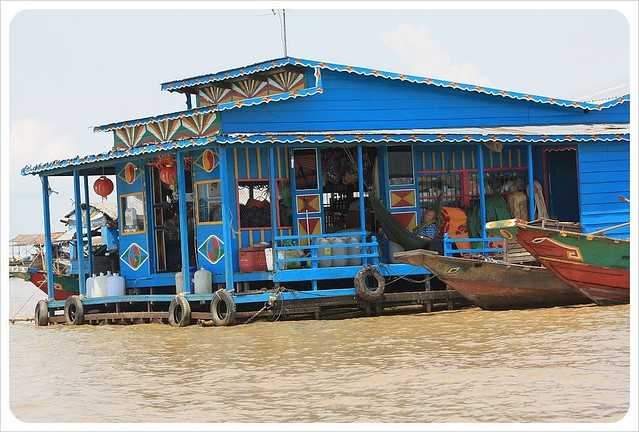 Because the water levels differ so drastically in dry and rainy season, fishing families who make their living on the lake began living in floating villages which move with the changing water levels. 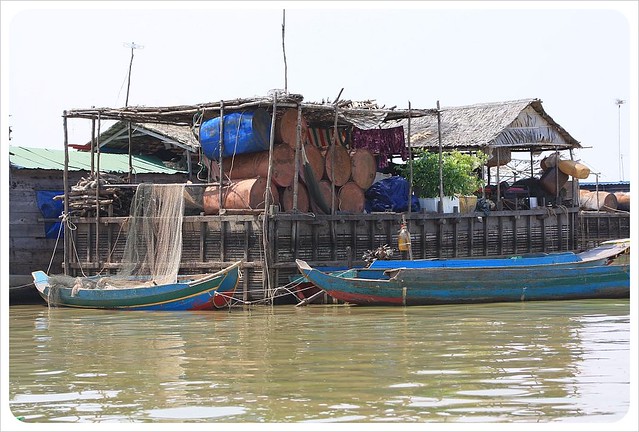 In the rainy season, this whole area is underwater. During dry season, these villagers live close to the shore.

Tonle Sap is one of the world’s biggest inland fisheries, producing over 400,000 tons of fish and feeding over 3 million people. There are over 220 different species of fish in the lake! 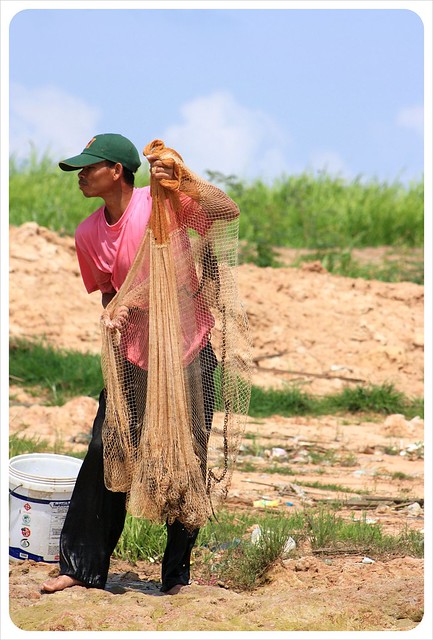 Life on the water

Providing over 3 million people with fresh fish means that fishermen are always in need. In total, 80,000 people live on the water permanently, spread out over 170 floating villages. Unlike much of the Cambodian job opportunities, the income is also reliable, but life on the water is difficult. Fishermen sometimes travel two days to reach the middle of the lake and spend up to a week at a time out fishing. Large waves, limited food and dangerous conditions take their toll. The life expectancy of a fisherman is 54 years. 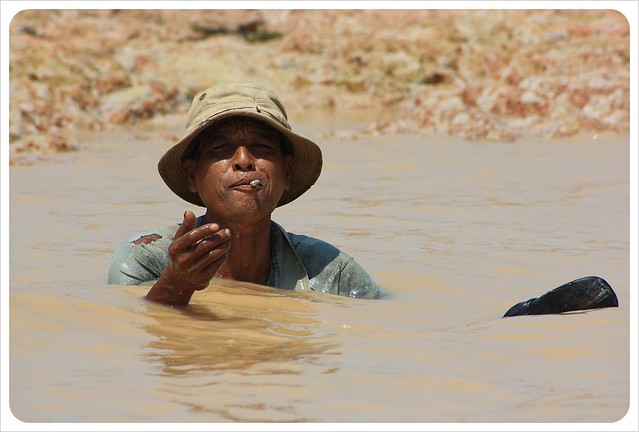 Unfortunately it is fairly common for fishermen not to return from their week-long trips. Many of the floating villages have their own floating orphanages to handle the many children whose parents do not survive. 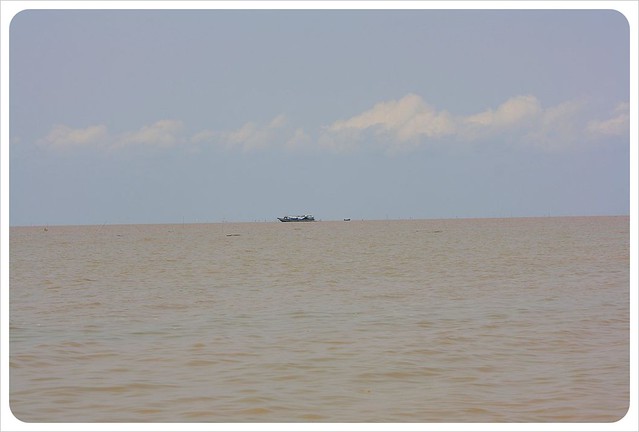 Life is hard on children, too. 12 per cent of the children die before the age of five due to the tough living conditions, the lack of medical care and ironically, malnourishment. Fish provides 65 per cent of protein in the Cambodian diet, but due to the lack of fresh fruit and vegetables, it is difficult to maintain a healthy diet. The annual income of households on the lake is under $500.

A few years ago, the New York Times published a sad outlook for Tonle Sap lake, reciting the issues the floating villages of Tonle Sap face due to climate change and longer periods of droughts. The ecosystem in the lake is changing, the catch of the fishermen is declining, and it is likely that the floating villages won’t be able to sustain themselves in the future. 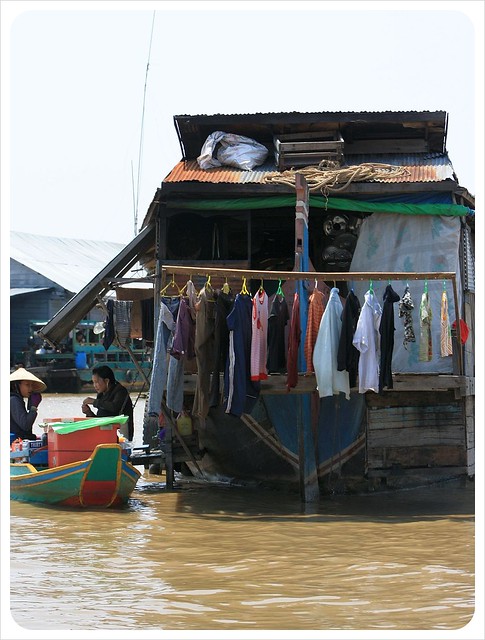 The community we visited, Chong Khneas, was just about to open its first floating hospital (pictured below) at the time of our visit. With seven villages and a total of 5,800 residents, this is one of the largest floating communities, so it makes sense that Chong Khneas be home to the first hospital. 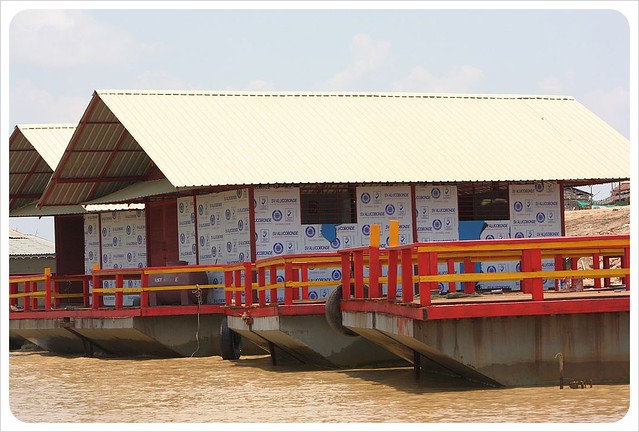 Life in a floating village means that every errand must be run by boat. Dropping the kids off at school or heading off to play basketball with their buddies must be done by paddling over by boat. And yes, there is a massive floating basketball court in the neighborhood! 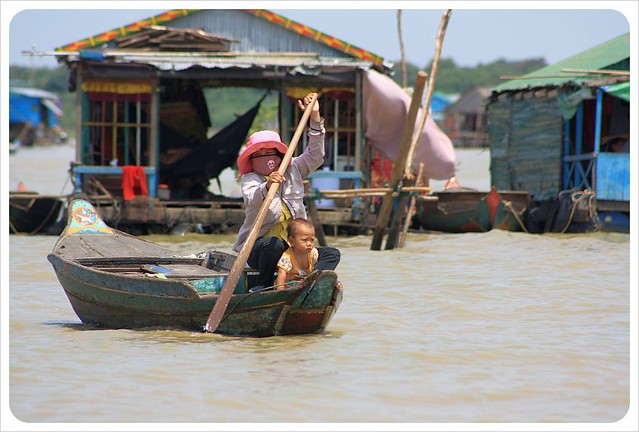 Most of the residents are self-sufficient, and it is incredible how they maintain their homes, with floating vegetable gardens and floating barns where they keep goats, pigs and chickens. 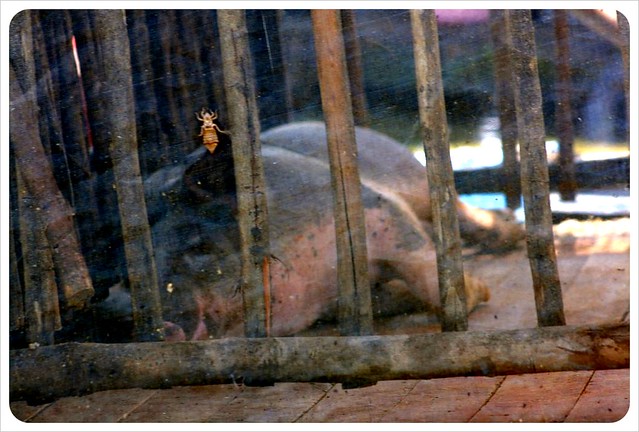 And like everywhere in Cambodia, there are dogs out here on the water as well, though I am not sure how they feel about living on a floating house with no room to roam. At least it is much easier to find them if they run…or swim…away! 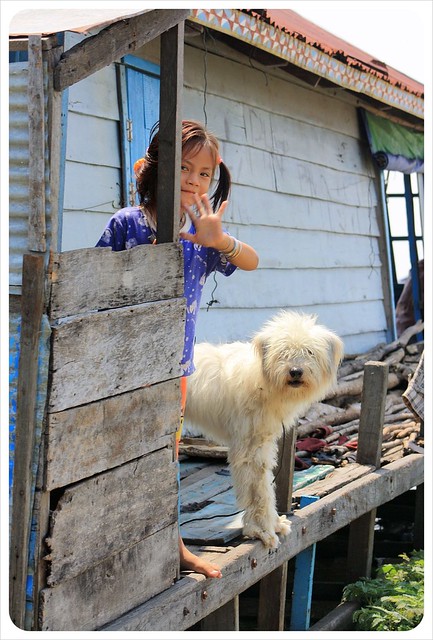 There are also gas stations in the floating villages. Chong Khneas has three in fact, plus five schools, seven fish wholesalers, and for everyone’s entertainment: four karaoke bars. You might remember that karaoke is very popular in Cambodia. 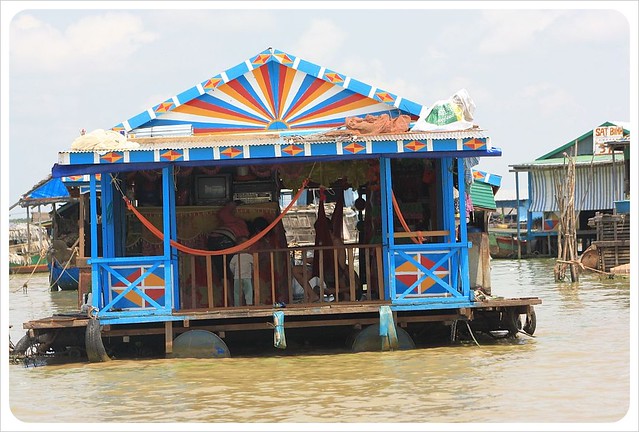 There are several floating supermarkets, but also floating markets like we had seen in Thailand: boats filled with fresh produce, and women paddling from house to house selling fruit and vegetables, wood and other things. 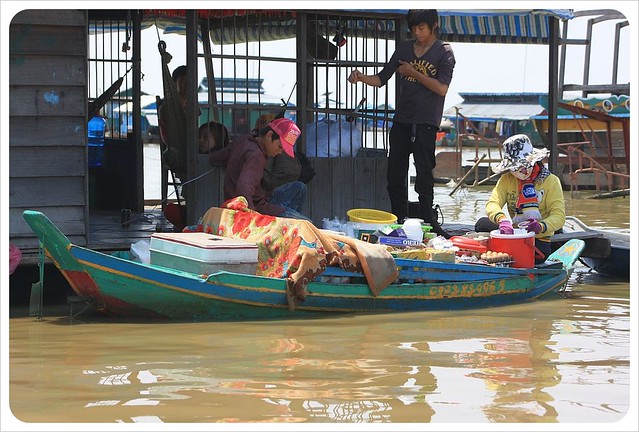 We are  not sure how the villagers manage to dry their clothes in Cambodia’s already humid climate, but somehow it seems to work. 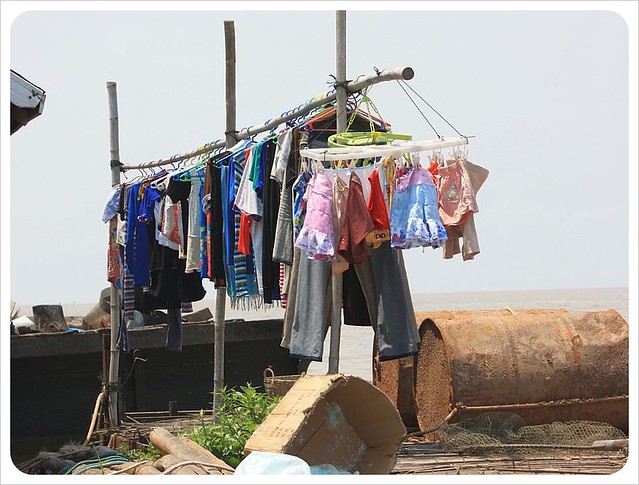 Little space for all your possessions… 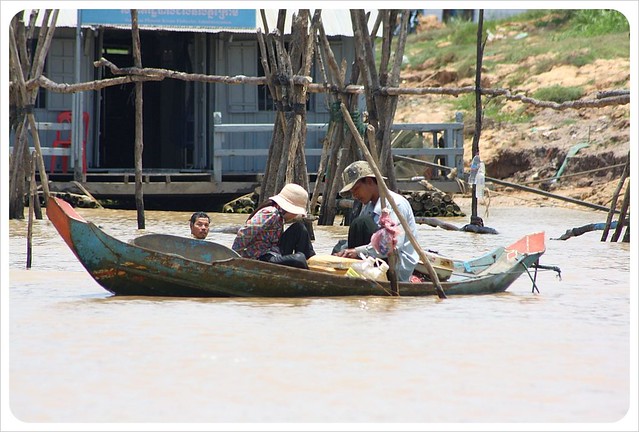 Fishermen arrive at the closest fish market to sell their catch of the day. 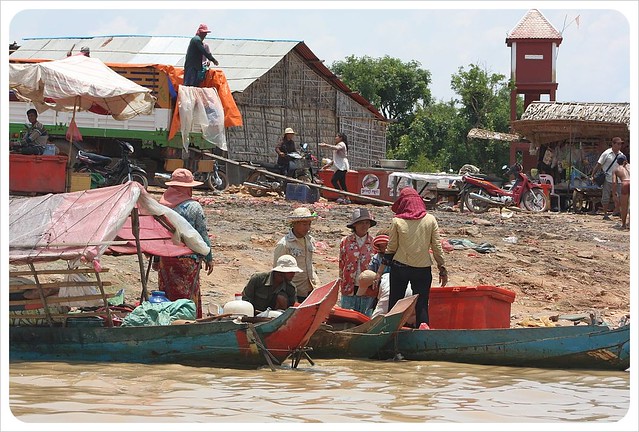 Repair work is also done on the water… 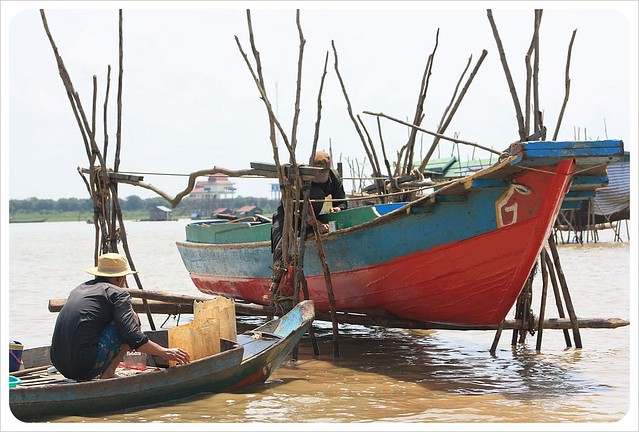 Happy faces… The kids are still enjoying themselves, but we couldn’t help but wonder how long they will stay that way, before following in their fathers’ footsteps. 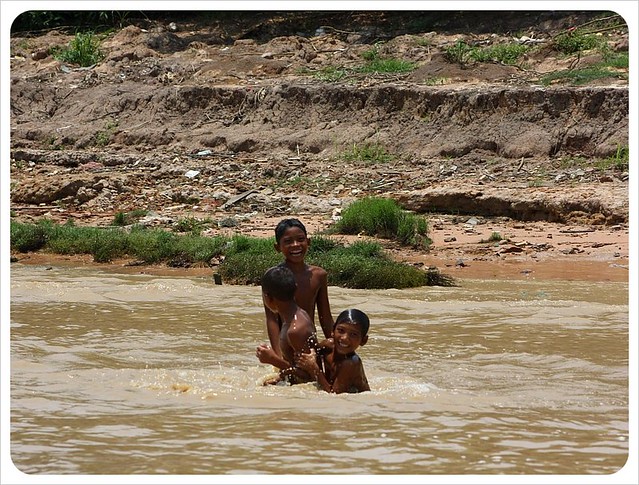 How to visit the Tonle Sap floating villages:

You can book day tours to Tonle Sap at all the travel agencies in Siem Reap, and it’s also possible to book a tour to Tonle Sap lake from Phnom Penh. Shop around and compare prices and see what’s included in the tour, or, if you don’t want to haggle, book a tour online via Getyourguide: 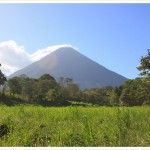 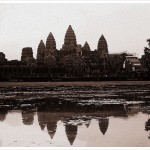 A taste of Cambodia… our first impressions
Click here to cancel reply.

Where are the toilets? Surely not just into the water. It seems to me they would get sick and spread disease.

Bill - surely into the water, yep. Considering that even a city like Venice still releases untreated sewage directly into the canals (not all buildings have septic tanks) it's doubtful that a floating village in Cambodia will get a proper sewage system anytime soon. Which is why illnesses are widely spread and life expectation is low.