Although we could spend months immersed in that particularly sweet blend of  New Orleans urban life, there came a point during our visit where we just had to get out of town…what we discovered were the rural roots that throughout history have melted together to make the Crescent City so unique. Here are our favorite day trips from New Orleans: Out on the Bayou

The picture of Louisiana I had in my head had been formed by the movie ‘No Mercy’. A very 80s Richard Gere plays a Chicago cop gone to N’Awlins to settle the score with some gangsters. He ends up having to escape them with a seductive Cajun woman, played by an equally 80s Kim Basinger, by trudging on foot through the swamps of Louisiana. I wasn’t interested in the danger but wanted to experience what life out in the Louisiana Bayou was like – this was a day trip from New Orleans that definitely needed to happen.

In New Orleans we had seen plenty of tour options to explore the swamps, most of which take place in Honey Island Swamp, the closest swamp to the city. We opted for a tour with Cajun Encounters, who pick you up at the hotel and use smaller, slower passenger boats instead of fast airboats, as they are quieter and made for getting up close and personal with much more wildlife. The hour drive out to the swamps meant passing by camps, or houses built on seven to ten foot high stilts. We’ve done a lot of road-tripping through the States, but I’ve never seen anything like these houses, completely off the grid and built to withstand massive floods and hurricanes. When we arrived, 16 of us were loaded into our boat and greeted by Captain Mike, who was Louisiana bayou through and through. Between rolling his cigarettes and drinking his coffee, Mike entertained us with stories about growing up in the swamps and we sat, mesmerized at the deep southern drawl escaping through his tar-stained teeth. I couldn’t have felt safer with anyone else for our day of alligator-spotting along the Pearl River, a wide river bordered by huge cypress trees covered in Spanish moss on both banks. The river led us into narrow channels where the still water was covered by a thick layer of green algae and looked like a bright green carpet undisturbed on the top of the water. It didn’t even take ten minutes until we spotted our first alligator, and we all jumped to our feet for photo ops as our captain beckoned them to approach the boat with pieces of meat. We saw plenty more of these giant native lizards sun bathing on the shores and wading discretely just under the water’s surface, along with turtles and birds like herons and eagles. Then, as we were taking in the beautiful scenery around us, Captain Mike announced he had a surprise for us: He introduced us to baby alligator Brian, only six months old and barely as big as my hand. We all got to hold him and feel his smooth white skin. 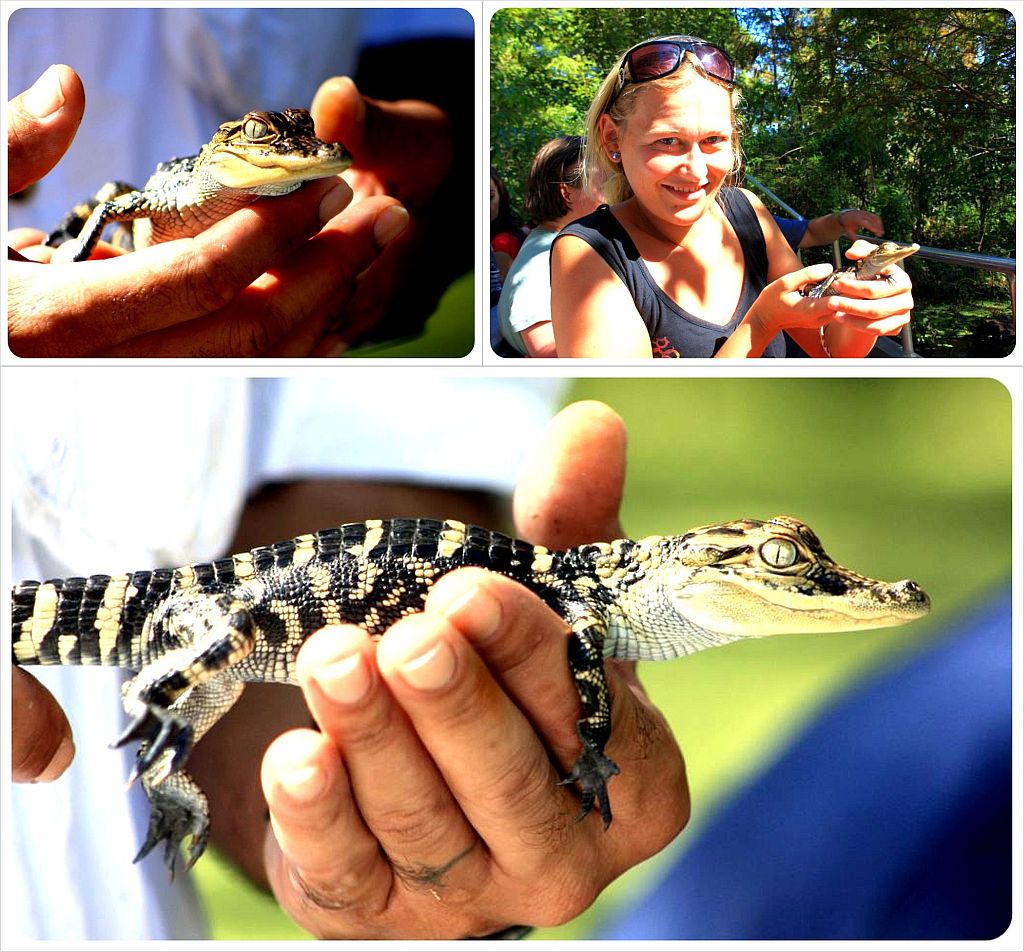 Later, we drifted past a few very basic houses up river. Old boats tied to rickety wooden piers and porches, some ravaged by weather and storms, others with families sitting outside waving as we go by. “Cajuns,” explains Captain Mike. “Couldn’t be happier out here, these families, but plenty of ‘em moved into the city a long while back.” We only notice that these houses look like people are having a great time, even boasting water slides that drop right from the porch into the river. Yes, the same river that we just went alligator spotting in. When we asked, Mike answered only, “Tough guys, Cajuns are,” with a glint in his eye. We had learned so much from our visit to the Boone Hall plantation in South Carolina and couldn’t wait to visit a Creole plantation in Louisiana, though we weren’t entirely sure what ‘creole’ really meant.

While Cajuns descended from French settlers in the Canadian provinces who relocated to Louisiana, Creole people were originally the first generation of French and Spanish settlers born in the Louisiana colony. Two very distinct cultures at the time, people often mistakenly combine the two today.

Creole plantation owners were some of Louisiana’s most successful businessmen, and although having a New Orleans ped a terre in the French Quarter was common, most of the hard work and daily lives were primarily based out on the farm. It was a two to three day boat-trip to the city back then, but now, at just an hours’ drive away, we squeezed in a visit to two different properties. The first stop was the Laura Plantation, and we arrived just in time for a tour of the house, grounds and gardens. Originally named l’habitation Duparc after the Duparc Family who owned the plantation in the late 1700s, today the property (named after the great granddaughter who sold it) is one of the best preserved examples of a creole plantation.

The tour guides are extremely knowledgeable. In fact our guide was a direct descendant of some of the landowners in the area, a true Creole with a working knowledge of French, English and the French Creole dialect. When asked to clarify questions on Creole culture, we learned how Creole business practices were reflected in the architecture of the main house of the Laura Plantation, and, as we made our way to the slave cabins in the back, he explains another significant aspect of the creole plantation.

Pre-Louisiana Purchase, the mainly West African slave population could purchase their freedom from their earnings on the plantation. Thousands actually did, until the practice was made illegal when Louisiana joined the United States in 1803. They joined a free mixed-race class that had developed over time when (white) Creole men took black mistresses in addition to their wives, creating second families. The children’s education was paid for, and the family of the mistress, if slaves, were set free. Although a co-existence of free blacks and slaves is hard to understand now, the role these racial attitudes played in the culture of New Orleans certainly played a major role in making the New Orleans of today so distinct from the rest of the country.

After touring Laura Plantation, we continued our until suddenly a row of impressive oak trees came into sight. We had arrived at Oak Alley Plantation, named after the 800ft long alley of 300-year-old oaks on either side. Affectionately referred to as the “Grande Dame of the Great River Road”, this Greek-style antebellum mansion continues to impress today with its towering oaks and the 28 massive white columns that surround all four sides of the house. In fact, Oak Alley Plantation has hosted some of the world’s biggest celebrities. Brad Pitt’s character Louis in Interview with a Vampire called the mansion home, and more recently, Beyonce and Jay Z star alongside Oak Alley in Beyonce’s Déjà vu video, filmed here in 2004. On the day of our visit, we were the last guests of the day and had the place to ourselves. Amazed at what a grand entrance the trees make, I sprinted the 800 feet and back and then we explored the grounds, including the modest cemetery where the most recent owners and their pets are buried. We had essentially a private tour of the house by a beautiful young Southern belle, dressed in traditional costume.

She told us stories of the owners throughout the years and that, like the Laura Plantation, Oak Alley had been a sugar plantation and how, after releasing the slaves post Civil War, the plantation could not sustain operations and was auctioned off for only $32,800 in 1866. As we drove back into the city that evening, we felt like we had a much more profound understanding of the city: the people who created the French Quarter and those free blacks and slaves who would have gathered together on Congo Square, and how the music grew to reflect the struggle and the celebration of the people of New Orleans. 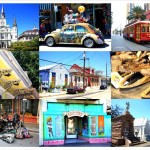 Five Must-See Things to Do in New Orleans
Click here to cancel reply.

Hi Dani. Great pics! Which camera are you using?

Hi Elena, thanks so much! I was using my Canon EOS 550D (http://www.canon.co.uk/For_Home/Product_Finder/Cameras/Digital_SLR/EOS_550D/) when we visited New Orleans. Loved that camera, but sadly, it broke last year :( Upgraded to a Canon EOS 1100D (http://www.canon.co.uk/For_Home/Product_Finder/Cameras/Digital_SLR/EOS_1100D/) now and am more than happy with it :)

I always wanted to go deep into the swamps of LA. Great post!

Thanks, Mary! It was a big dream of ours and the tour did definitely not disappoint! One of the highlights of our road trip last year :)

Great photos! Looks like a fun trip. I would definitely want to get out of the city and see this area too.

Thanks Stephanie! We were happy that we had enough time to fit in both the city and some of Louisiana, too. Highly recommend it - the drive from New Orleans across Lake Pontchartrain alone is stunning - the causeway over the lake is 23.83 miles (38.35 km) long, one of the world's longest bridges over water!

Ah, what a cute baby alligator! When we were in the Everglades we got to hold one that was quite a bit bigger than that (though still a baby) and I was surprised that the skin felt so... firm but squishy at the same time. It was weird. :)

Thanks Christy! We can't wait to go to the Everglades - they are high up on our list of places to visit!!

I went on the same swamp tour with Captain Mike last year! It seems he's always got a baby alligator with him - it was kind of cool to hold it. Not as cool as seeing the swamps, though. They were an amazing place.

Can't believe you went on a tour with Captain Mike last year too - how random!! :D The baby gator was the highlight for many people in our group, but I found the massive gators in the river much more impressive (and frightening!)