Kuala Lumpur crushed our quest for endless summer earlier this year when, for the first time, we were absolutely defeated by the heat. We fled to the Cameron Highlands, rumored to be the coolest place in Malaysia with year-round temps of 73 degrees (23 Celsius). A five hour ride from the Pudu Sentral bus station in Kuala Lumpur led us up into the highlands, where there are two towns to choose from for lodging – Tanah Rata and Brinchang. We chose to stay in Tanah Rata, which turned out to be the right choice for us. The shiny new Starbucks in the center of town became our office, and the dirt-cheap and delicious Indian food right next door was our daily go-to. As it turns out, Malaysian food is very meaty, so we survived on Indian cuisine throughout the country. Our hardest hike ever

The next day, it was time to transform from our standard uniform of flip-flops and shorts into jeans, socks and hiking shoes, drop $1 on a map of hiking trails and head out on our first Cameron Highlands hike. Only five miles apart, buses and taxis efficiently connect Tanah Rata and Brinchang, but we decided to hike the trail between the two instead. Up a path, on a paved road through a neighborhood, left into a farm, back into the forest, the hike started off like any other. Occasionally grabbing onto a vine when footing was slippery, then increasingly stopping to catch our breath, suddenly we realized what kind of a mess we had gotten ourselves into. The hike connected two trails, one moderate the other labeled ‘challenging’.

Over two hours in to the hike, the terrain went from ‘challenging’ to literally hanging on a vine sliding down a nearly vertical, muddy slope only to look directly up at another, equally vertical mud wall to scale. At some point, a sign said 1.1km to the Chinese Sam Poh temple, our goal. Fifteen minutes after descending into and crawling on all fours back up out of yet another ravine, the sign at the top read Chinese Sam Poh temple 0.9km, and after the next up and over it read: 0.8km. We were overcome by fits of laughter, a combination of pride at being able to even accomplish this level of hiking and utter exhaustion to the core. At this point, we would not have been surprised for the sign to say 1.2km and that we somehow, in this hiking twilight zone, had gone backward in time and space.

We pushed through and, as easily as it started, reached the temple at the edge of Brinchang. Hands and faces streaked with thick layers of mud cut with rivers of sweat, we came out onto the main road, all too aware that Tanah Rata was just a quick 10-minute car ride behind us. To say we had taken the hard way is an understatement. Arriving at the Big Red Strawberry Farm, we earned every single bite of strawberry goodness in all its forms. The farm also grows hydroponic lettuce and other greens, but the sight of big, bright red strawberries hanging from hundreds of rows of strawberry plants was almost too good to be true. At the food counter, we ordered a Spinach and Strawberry salad, a strawberry sundae, deep-fried strawberry ice cream, a strawberry yoghurt honey parfait…and all of it was delicious. Even on a weekday afternoon the farm was hopping, and those who took the easy way up here may have looked at us with our mud stained shoes, gobbling up food as though we had never eaten before and judged, but the moment for us was glorious. What happened after was not.

Back to the road, we slumped onto a bench at the bus stop and waited. And waited. 40 minutes later, no bus had come, the food had re-energized us just enough and so we walked the sidewalk all the way back to Tanah Rata. It was downhill and paved, so even though it took about 50 minutes to get back to the hotel, it felt like a breeze. The highlight of the Cameron Highlands

The next day we hopped on a tour that covered the main sights of the Cameron Highlands: the Mossy Forest, the Gunung Brinchang viewpoint (second highest of all the highlands) and the BOH tea plantation. The Mossy Forest was unlike anything we had ever seen – a magical forest where the trees, the ground, branches, roots, everything was covered in a soft, green moss, where countless orchids bloom, and where unique frogs, birds, snakes and insects thrive among the blankets of peat moss. Between the morning rain and low clouds, the views from Gunung Brinchang were less interesting, but that didn’t matter much to us: We were in it for the tea. 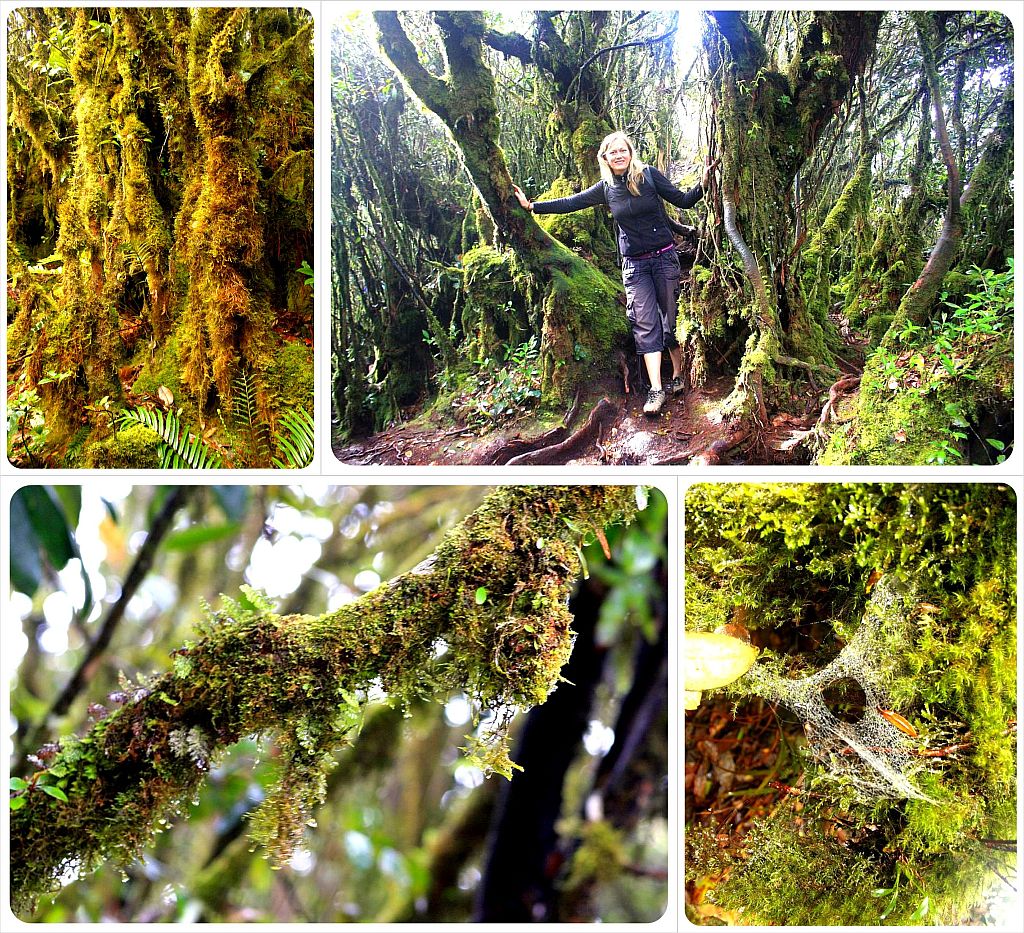 The BOH tea plantation is home to hillsides covered in waves of tea bushes so steep it is a wonder how workers even reach the tea. Unfortunately the tea had just been harvested two days before our visit, so we would never see the process first hand, but learned about it in the plantation’s museum. Luckily, we had plenty of steaming hot tea and buttery scones and jam on the terrace of the on-site restaurant overlooking the plantation, which was one of the most memorable experiences of our time in Malaysia. Founded in 1929 by BJ.A. Russell, the BOH Plantations proliferated during the British colonial era and, as their success grew, workers were imported from southern India and Sri Lanka, also part of the British Empire. Today, the Highlands, like much of Malaysia, are home to third and fourth generation Indians, resulting in scores authentic Indian restaurants to sample. Since we are both huge fans of Indian food, we were more than happy to eat Indian food three meals a day, and tea and scones during the rainy afternoons as though we had never left Britain two years before. Except, of course, that after five days of heat relief, we moved on to beach hopping in Penang and Langkawi, two of Malaysia’s hottest and sunniest islands…

Polaroid of the week: The entrance to the Batu Caves near Kuala Lumpur, Malaysia
Click here to cancel reply.

That hike looks difficult but also a lot of fun. I think I would have liked that hike. You were definitely rewarded at the temple and with the food and goodies afterward.

The hikes in the Cameron Highlands are fun, but the highlight was the Mossy Forrest - such a spooky place, and so pretty!

Malaysia looks so lush and green - so even though the hike was tough, it sure looks worth it. I think the thought of those tea and scones would be enough to help get me through it! Yum.

That hike sounds damn tough! Good job on completing it. Plus the reward sounds good enough :)

hahaha, oh girls, what a hilariously poor decision. At least you had each other and you lived to tell a great story! As a true hater of hikes, I admire you, but even more so, I envy all those strawberry delights you enjoyed!

The strawberry farm was exactly what we needed after that hike :) We usually don't mind hikes but at that point we were pretty out of shape :)