Based on the available shuttles from Guatemala and Nicaragua to El Salvador, it might be easy to think that the only place worth a visit in El Salvador is the beach.

For surfers, the beaches of El Salvador – the most well known include El Tunco, El Zonte, El Zunsal and La Libertad – are apparently a dream. The waves always break in the same place and the lessons are about 25% of the price of learning in Costa Rica, the other Central American surfing hot spot. 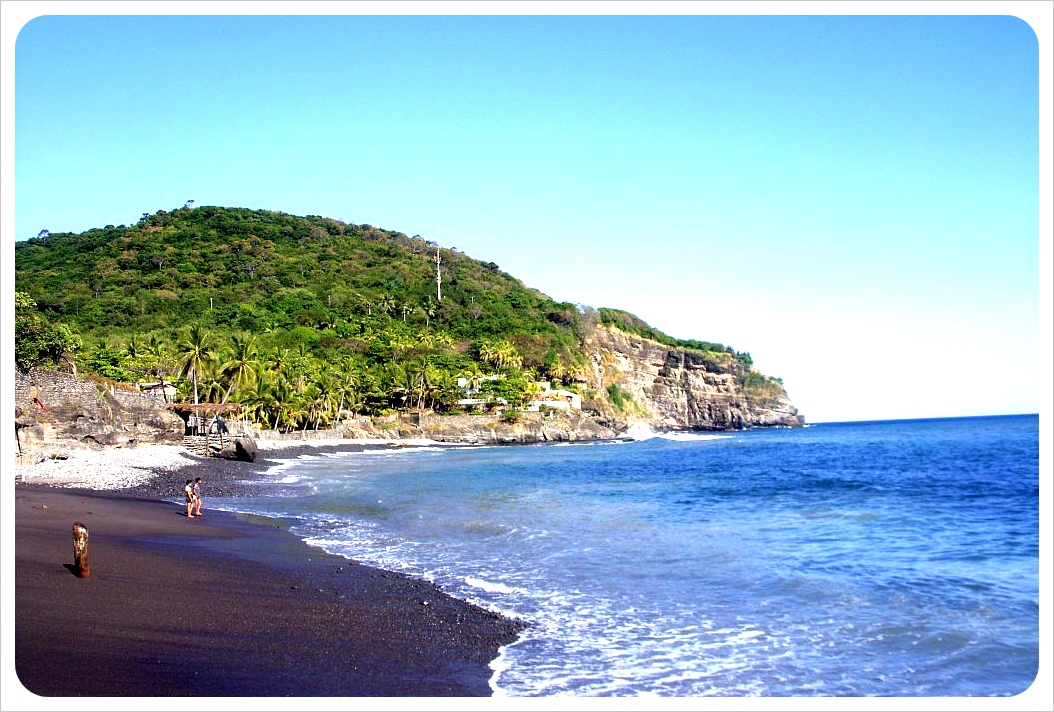 If you don’t surf, the beaches of El Salvador don’t offer much. The actual beach is rocky, at times you’re clambering over rocks in flip-flops trying to find a patch of sand where walking into the water doesn’t require shoes. The hotels and hostels tend to have full service restaurants and pools, because swimming on the beach is that difficult. So while the beaches are a cool atmosphere to visit, and give surfing a shot, we would encourage you to Go Beyond the Beaches of El Salvador and check out some of the inland colonial villages.  In this article we’ll look at El Salvador’s Ruta de las Flores, or the ‘Flower Route’.

The name of this 40km stretch of western El Salvador comes from the plentiful wildflowers that grow along the road, especially between November and February when they are in full bloom.  The Ruta officially begins in Sonsonate, which is easily reachable from La Libertad, the main beach town and transportation hub for El Salvador’s beaches, making it easy to combine with a surf getaway.

While the flowers are beautiful when in full bloom, it is the pretty colonial towns that line up along the Ruta,  plus the scenic waterfalls, lagunas and a weekly food fair  that attract visitors from around the country to this mountainous Ruta. 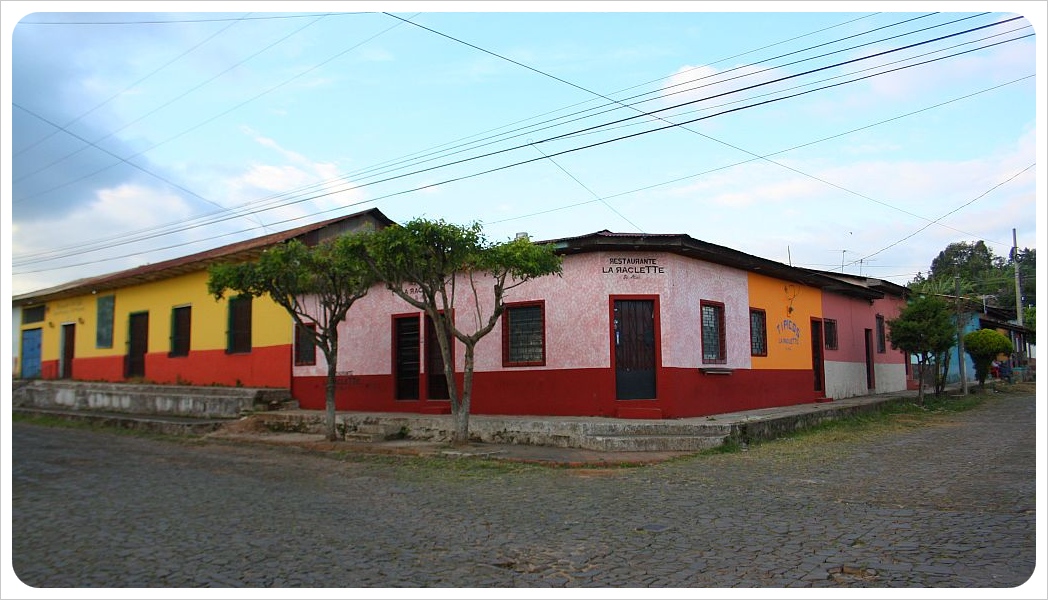 Coming from the south, the first stop is the town of Juayua, famous for its weekly food fair. The otherwise sleepy town heaves on weekends when visitors from around the country, neighboring Guatemala and international tourists pack the streets to sample regional dishes and listen to live music on the plaza. Juayua is also the starting point of the ‘7 Waterfalls’ tour, a hike leading through series of breathtaking waterfalls. Don’t forget your bathing suit to swim in several of the pools at the falls. 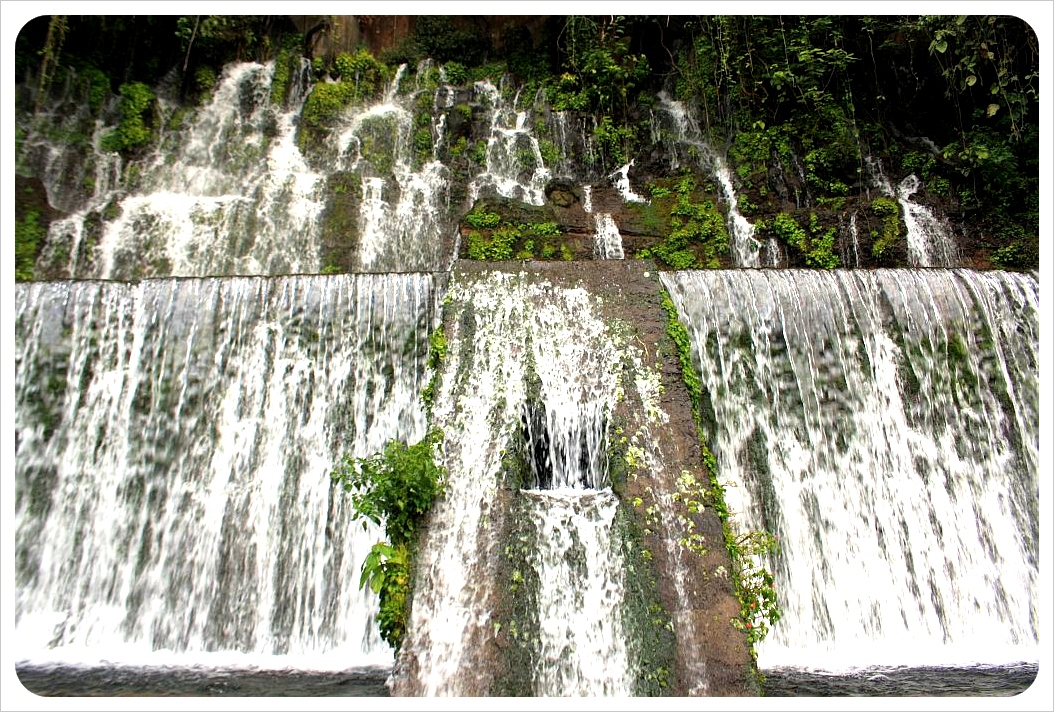 Food junkies note: Opposite the church on the main square, turn right and walk one block up to reach a large ‘pupuseria’. We loved the pupusas at this place.

The next little town on the Ruta is Apaneca, even sleepier than Juayua, with cobble-stoned streets and a beautiful church. There are scenic two crater lakes outside of town, Laguna Verde and Laguna de las Ninfas, which make for great hikes. Other than for the hikes, the town doesn’t need more than a quick stroll and you can head off to the next stop soon. 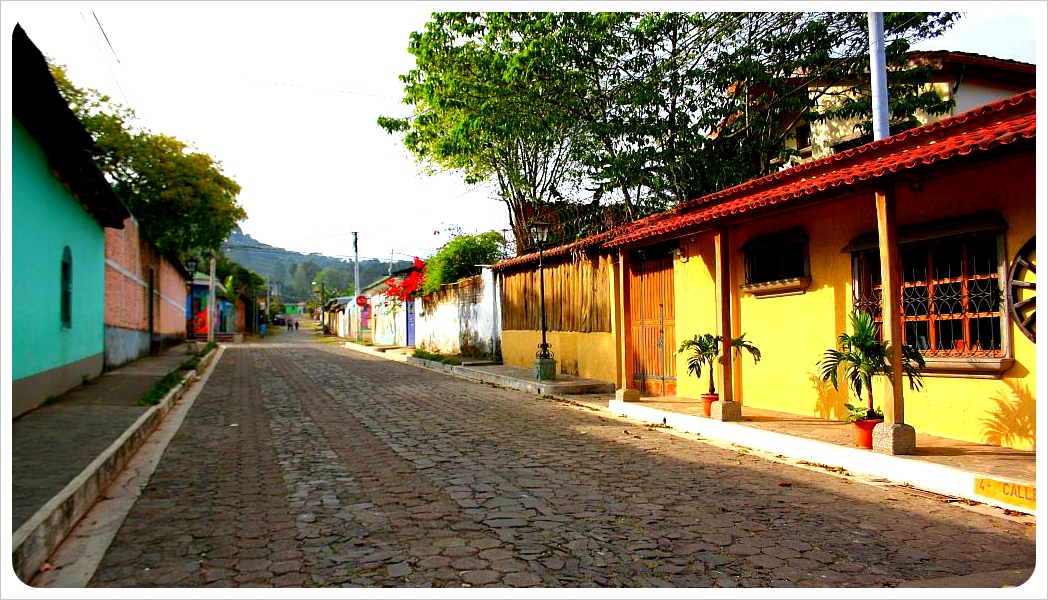 Ataco, just ten minutes from Apaneca, is a very charming stop along the Ruta de las Flores. The colonial town’s cobblestone streets are lined with brightly painted houses, several with beautiful murals. Two very similar churches anchor each side of town. Make your way up to the view point on the hill behind the church La Concepcion for views over Ataco and the coffee plantations that blanket the surrounding mountains. 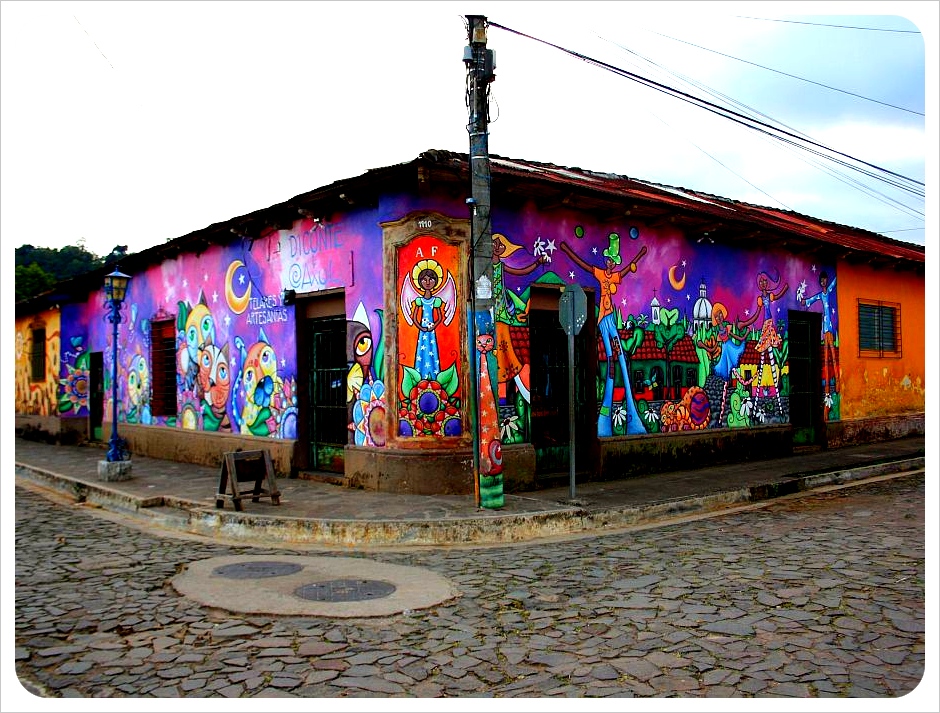 The best (but also the busiest) time for a visit is the weekend when there is live marimba music on the plaza, all of the little shops and restaurants are open and food and craft stands fill up the plaza.

The last stop is Ahuachapan, considerably more populated than the other towns along the Ruta de las Flores. Ahuachapan is missing Ataco’s charm, and being a much busier market town and transport hub on the way to Guatemala and over to the El Salvadorian city of Santa Ana, there is not much in terms of tourism to offer. The main plaza, filled with palm trees and flowers, makes a great spot for people watching and has a beautiful church on its north side. Check out the mural covered buildings on the right side of the church, which also house a few restaurants, but don’t plan in a lot of time here. If you don’t visit the Ruta with a car, we might even say to skip Ahuachapan altogether. 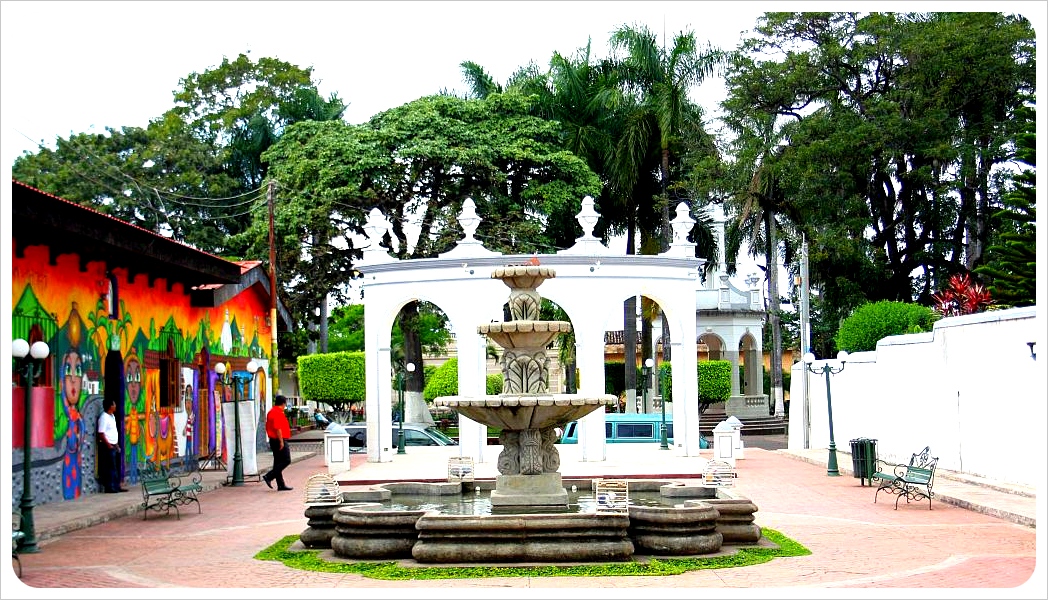 The freedom of visiting the Ruta with a car means you can easily stop, hop out for a stroll and continue on to the next stop, and the entire route can be visited in one day. For those visiting by bus, plan in two days to cover all the stops. We used Juayua as our base and then explored the rest of the Ruta from there taking the 249 and 53 buses to each of the towns.

If you do combine the Ruta de Las Flores with a surf escape, Bus 287 runs from La Libertad to Sonsonate, the very southern end of the route, in about 2.5 hours. From there, you can choose which town to start in and take a bus to get there. If you need help, just ask, as the people are very friendly. The chicken buses in El Salvador are safe and easy to get around, and cost between $0.50 and $1.50 per ride.