The word ‘magical’ is severely overused, and sets expectations too high for almost any destination. The city of Merida, on the Yucatan peninsula, had been described on blogs and in articles as ‘magical’ and we were headed there after spending five days in San Cristobal de las Casas in the state of Chiapas, which we really might actually describe as magical. Of course we expecting a bigger, even better San Cristobal. After a stroll through the city center, however, we were nothing more than disappointed with our first impressions of the place.

Were we already jaded travelers? Was San Cristobal really just that beautiful? Maybe we were missing something, we thought, so we asked the owner of our B&B for suggestions on what else there is to see in and around Merida. He mentioned the well-known tourist sights in the area: the fishing village of Celestun and the Mayan ruins of Dzibilchaltun. He then mentioned a visit to three cenotes. But not by car or even by bicycle.

These cenotes are reached by riding on horse drawn carts (note: not carriages, these were far from romantic) on centuries’ old train tracks through the jungle. This sounded just quirky enough to recapture that magical feeling we were looking for on our visit to Merida. 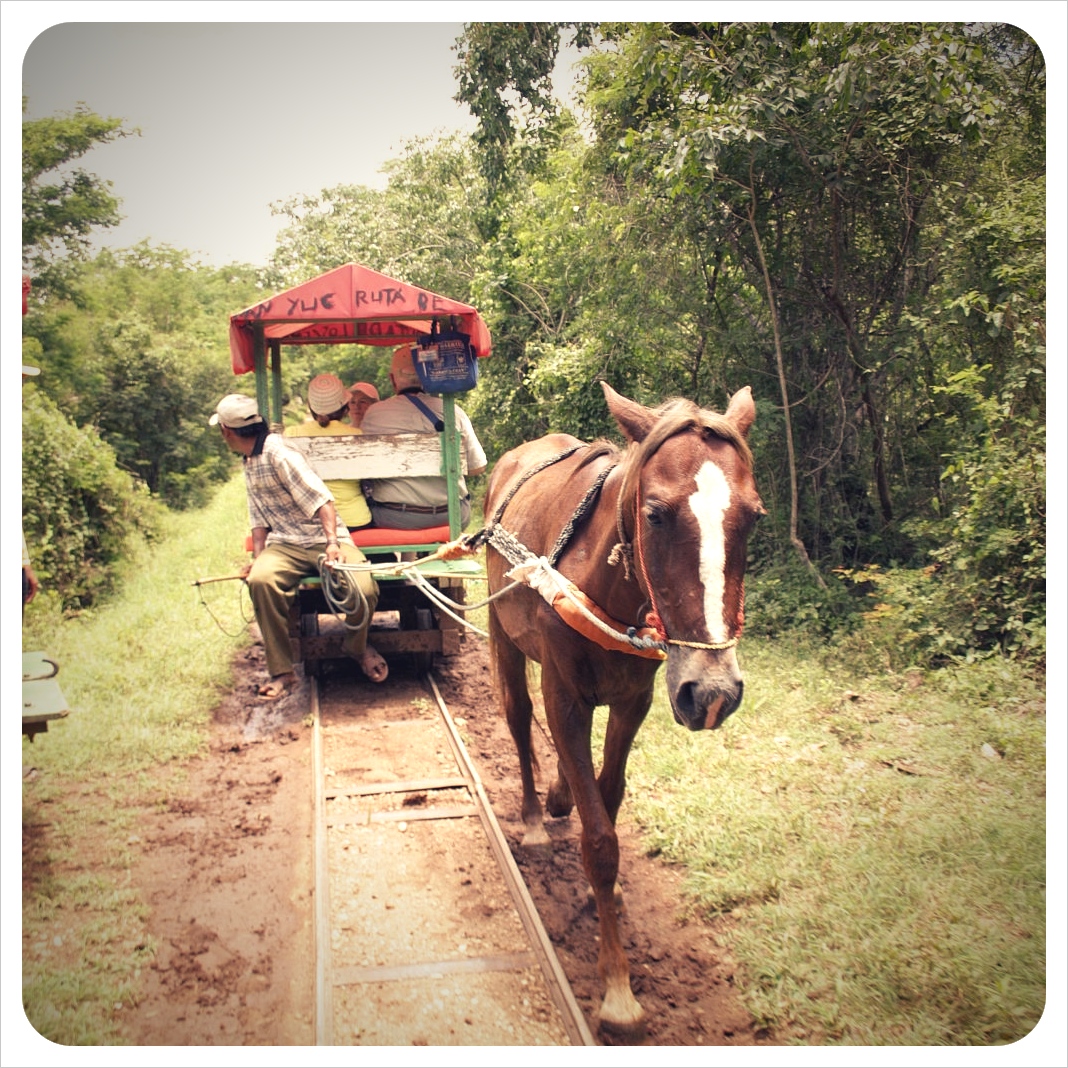 Fifteen minutes, and one huffing and puffing bici-taxi driver later, we arrived in the small village and the bici-taxis stopped next to a bunch of scrawny, hungry-looking horses chilling out in the shade of the trees along some old rusty tracks. 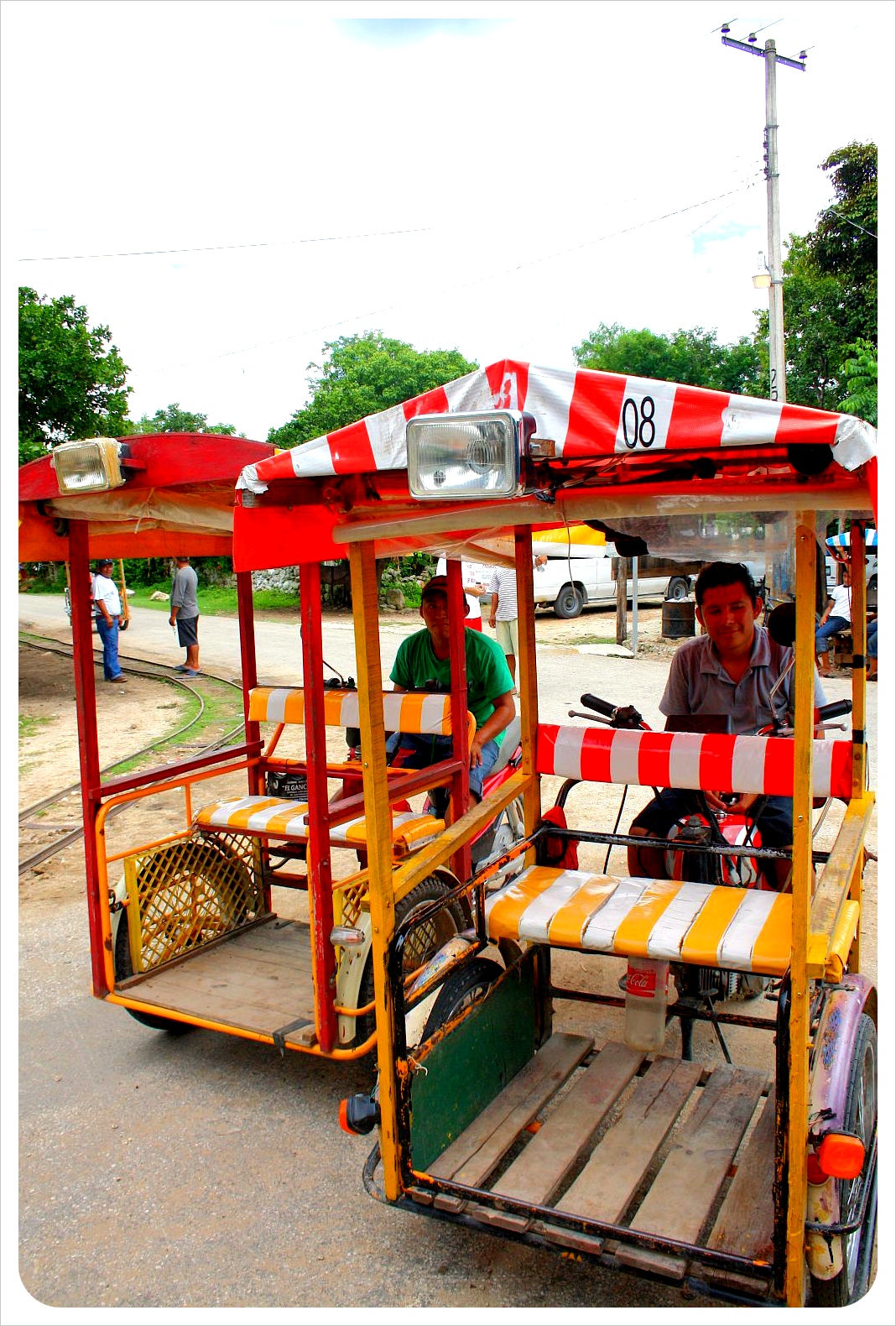 The tracks seemed to be old train tracks, but smaller, with some leading into high grass, while others were disconnected and broken. Why so much info about some discarded tracks, you say? It turns out these tracks were not broken or discarded at all. Once used to transport agave plants to factories which made very in-demand rope, these small-gauge tracks are now used daily as a means to reach the cenotes. After about five minutes of the typical semi-lost gringo staring, a few lingering older Mexican men started to put little wooden carts on these tracks, prepared the horses and signaled us to get in the carts. 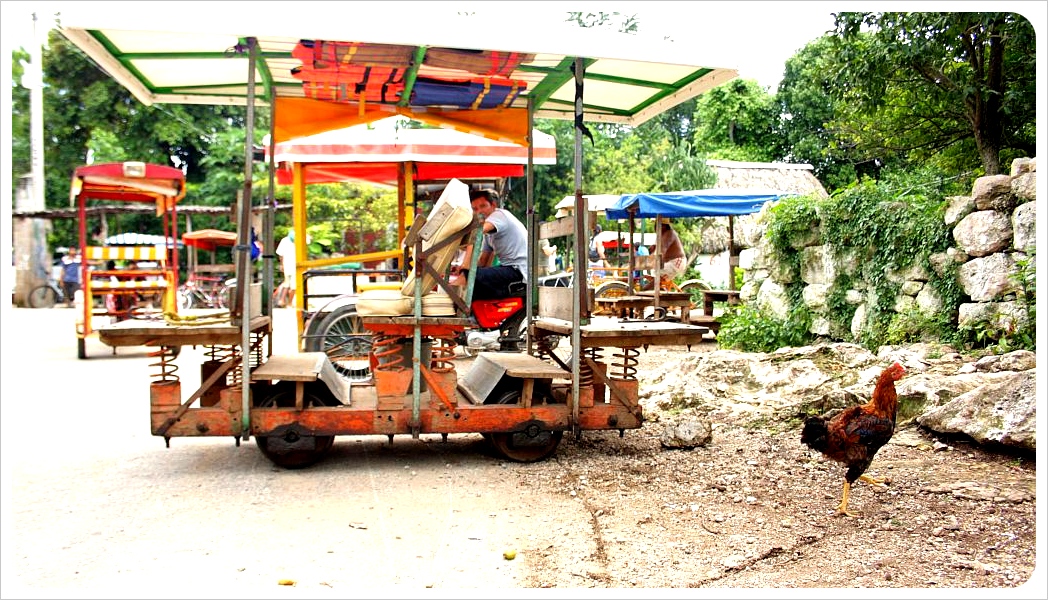 We sat down on one along with a friendly man from the Netherlands, our driver jumped in and the horse started to pull our cart on these not-broken-at-all tracks into the woods. Our first sign of magic, indeed! After 10 minutes riding at full speed down the rusty old tracks together with a now overly-friendly Dutchman, we arrived at the first cenote. This was clear by the other carts and horses to the left and the right of the tracks. 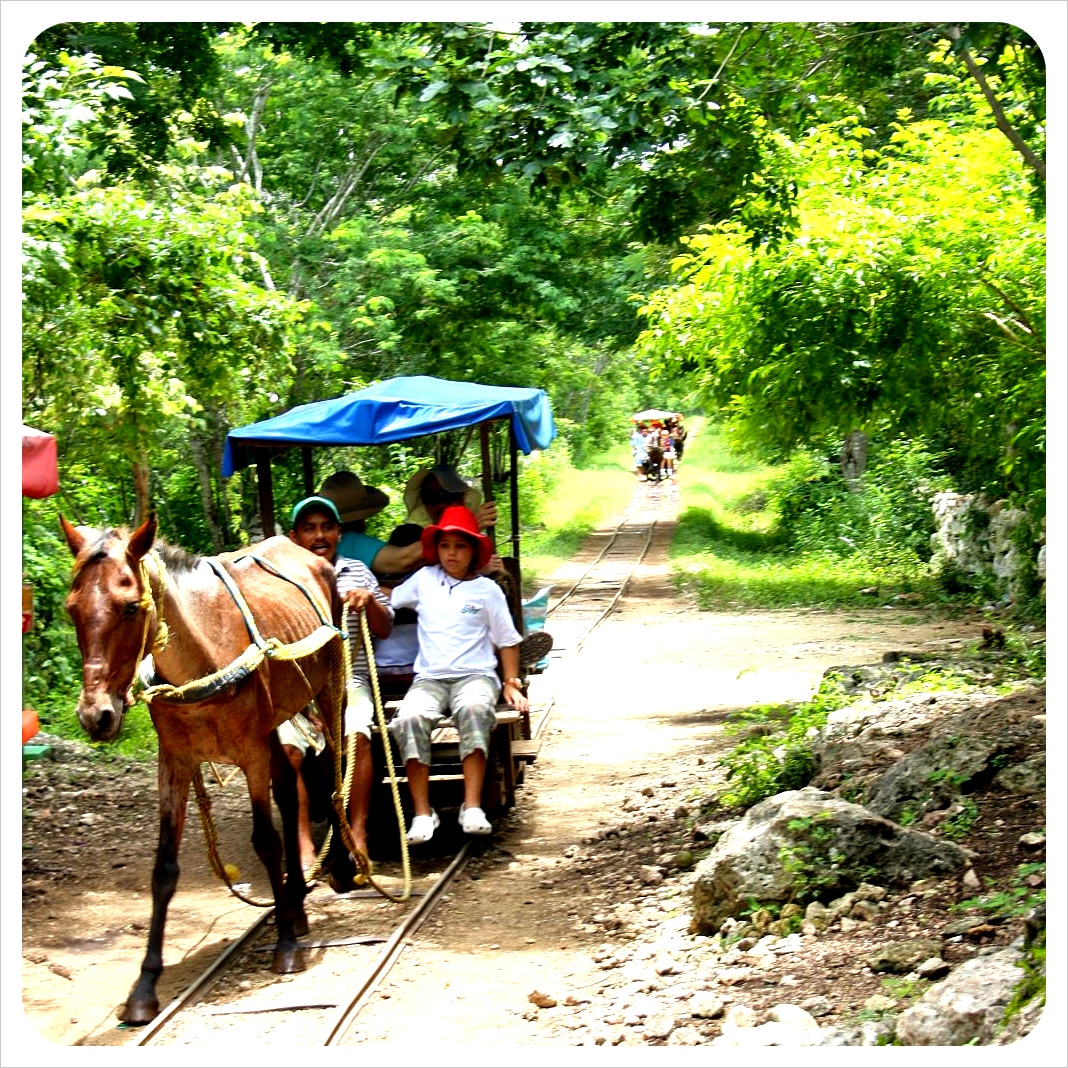 Anyone who spends some time on the Yucatan will quickly learn about cenotes, as the peninsula is full of them.  These subterranean swimming holes can be almost completely open, like a pond, or be hidden underground with a roof of rocks. Filled with stalagmites just like a cave, they are only accessible by climbing blindly down a ladder through small entrance holes into the pools below. 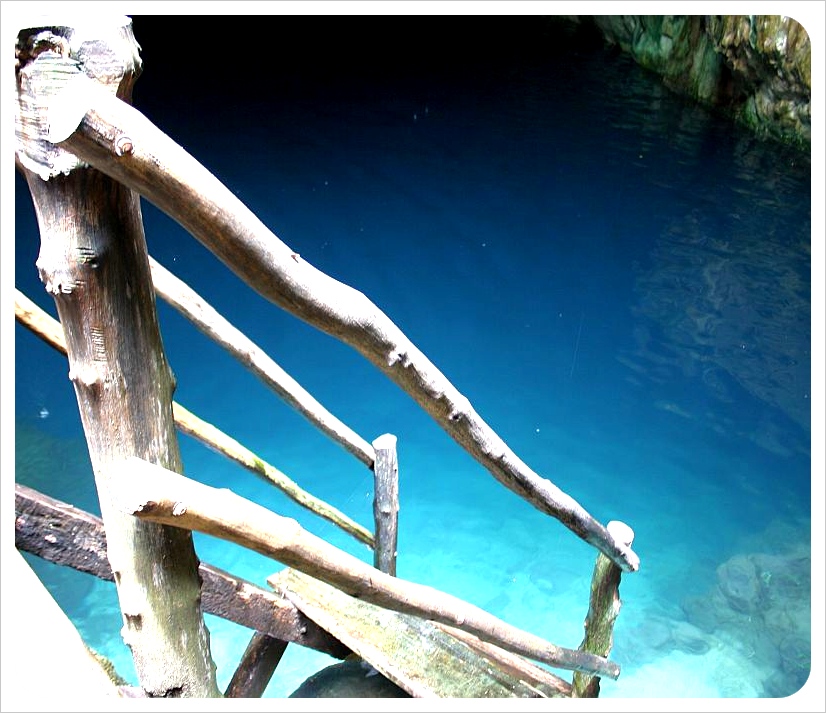 The entrance to the first cenote was slightly open, so we could see a few families and a group of English people swimming as we climbed down the wooden stairs. The rock hollowed out into a deep cave in the back and bats whizzed back and forth overhead. Stripping down to our suits, we quickly joined in, only to be called out thirty minutes later (although all of this is seemingly very unofficial, your driver does keep you on a strict schedule, with thirty minutes at each of the three cenotes). 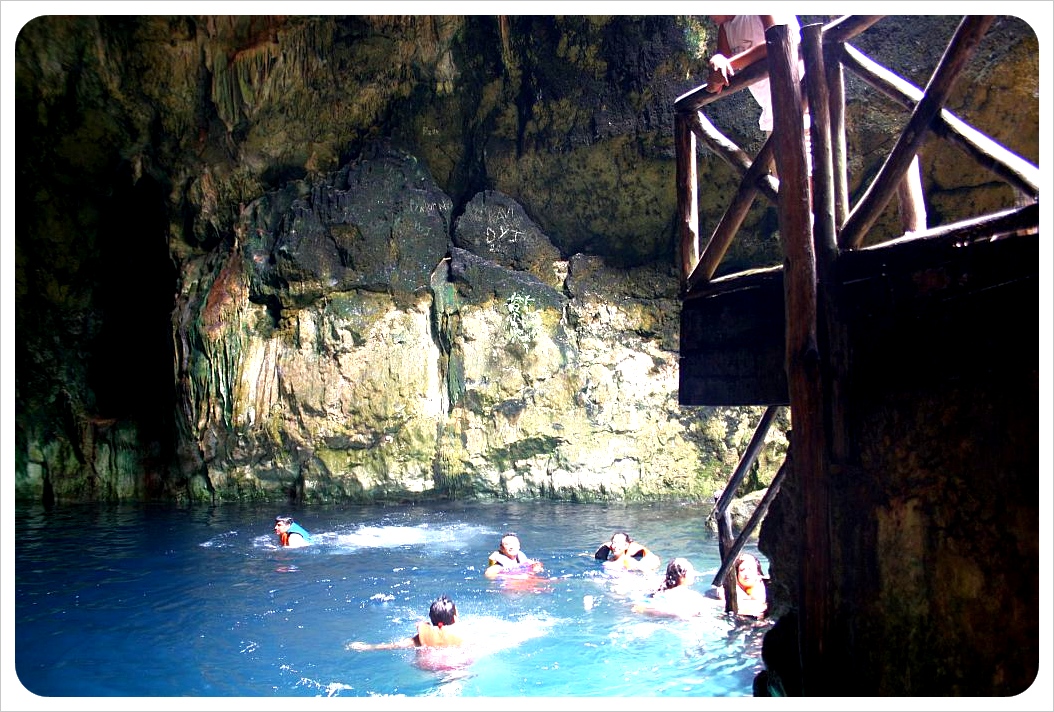 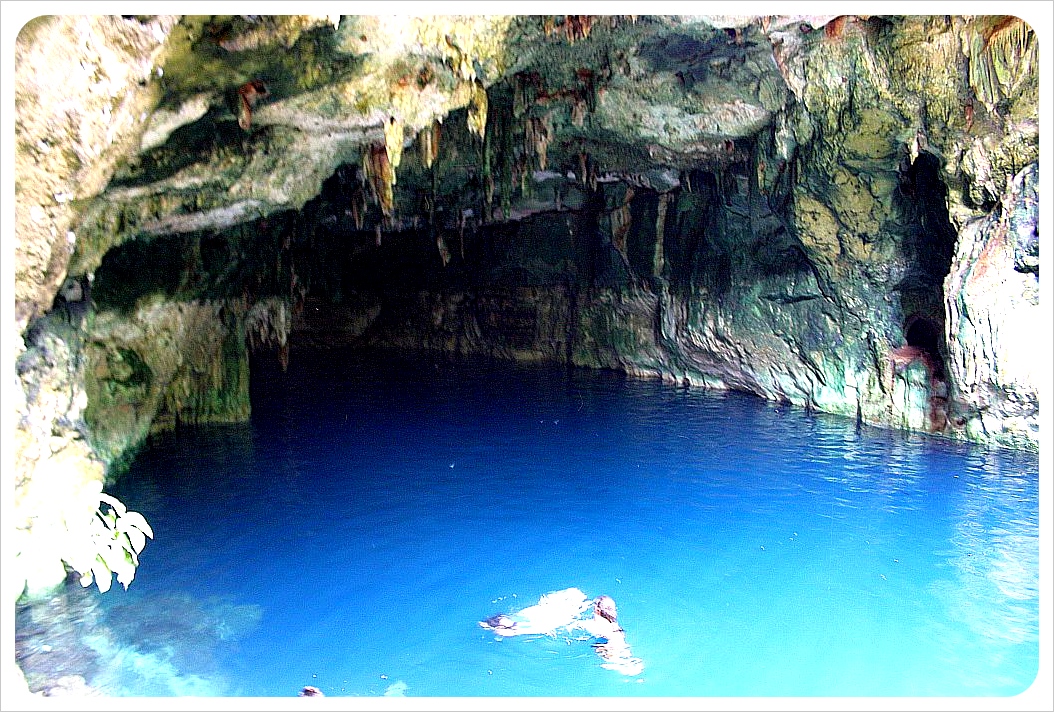 We climbed up out of the cool blue pool and headed, sopping wet and now half-dressed, to the next cenote along the rickety tracks. This time, broken stairs lead into a nearly covered, much darker cenote. Children swam around the 20 meter-long roots hanging from a tree which had grown on top of the ceiling as sunlight shot in through the hole and illuminated the subterranean pool. 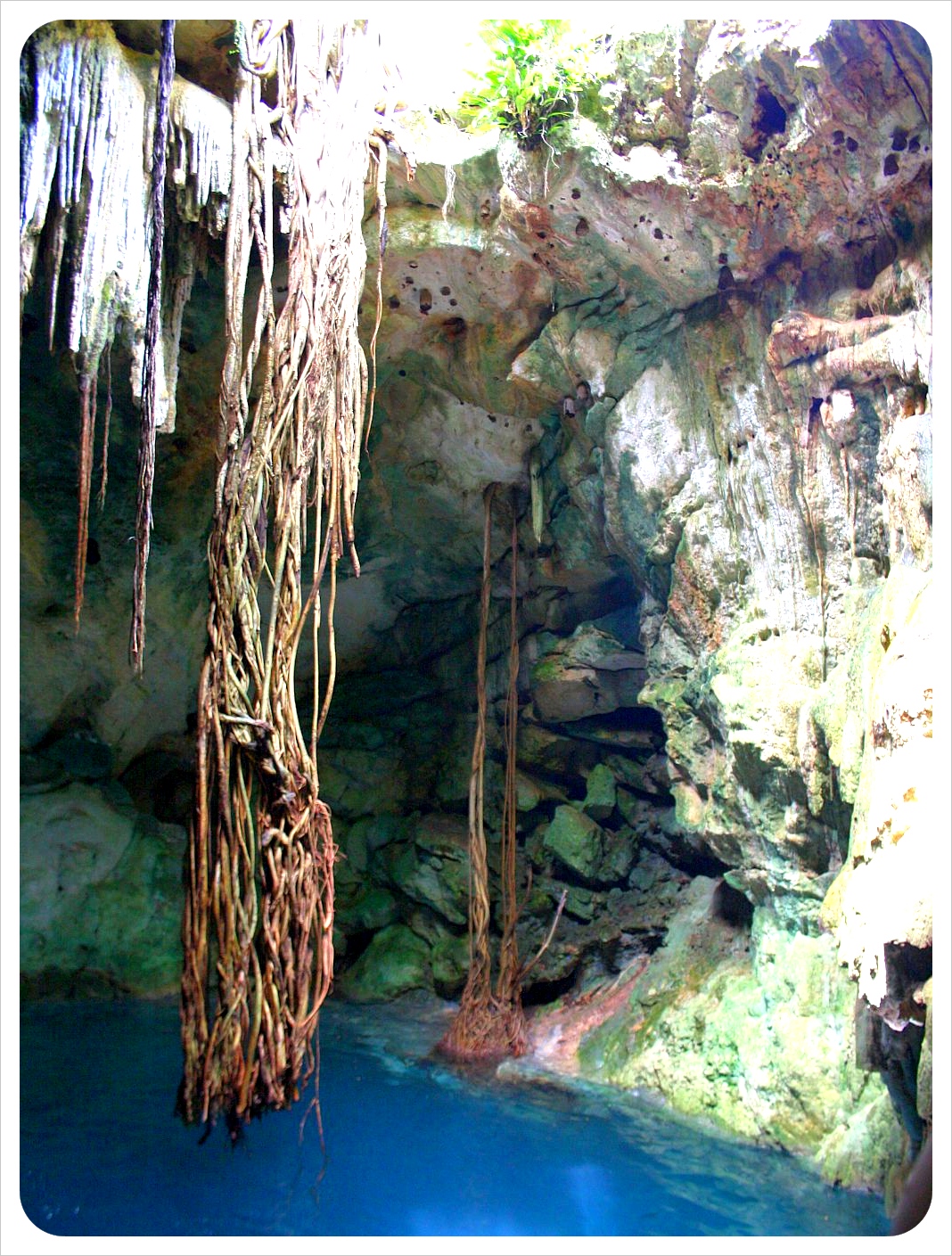 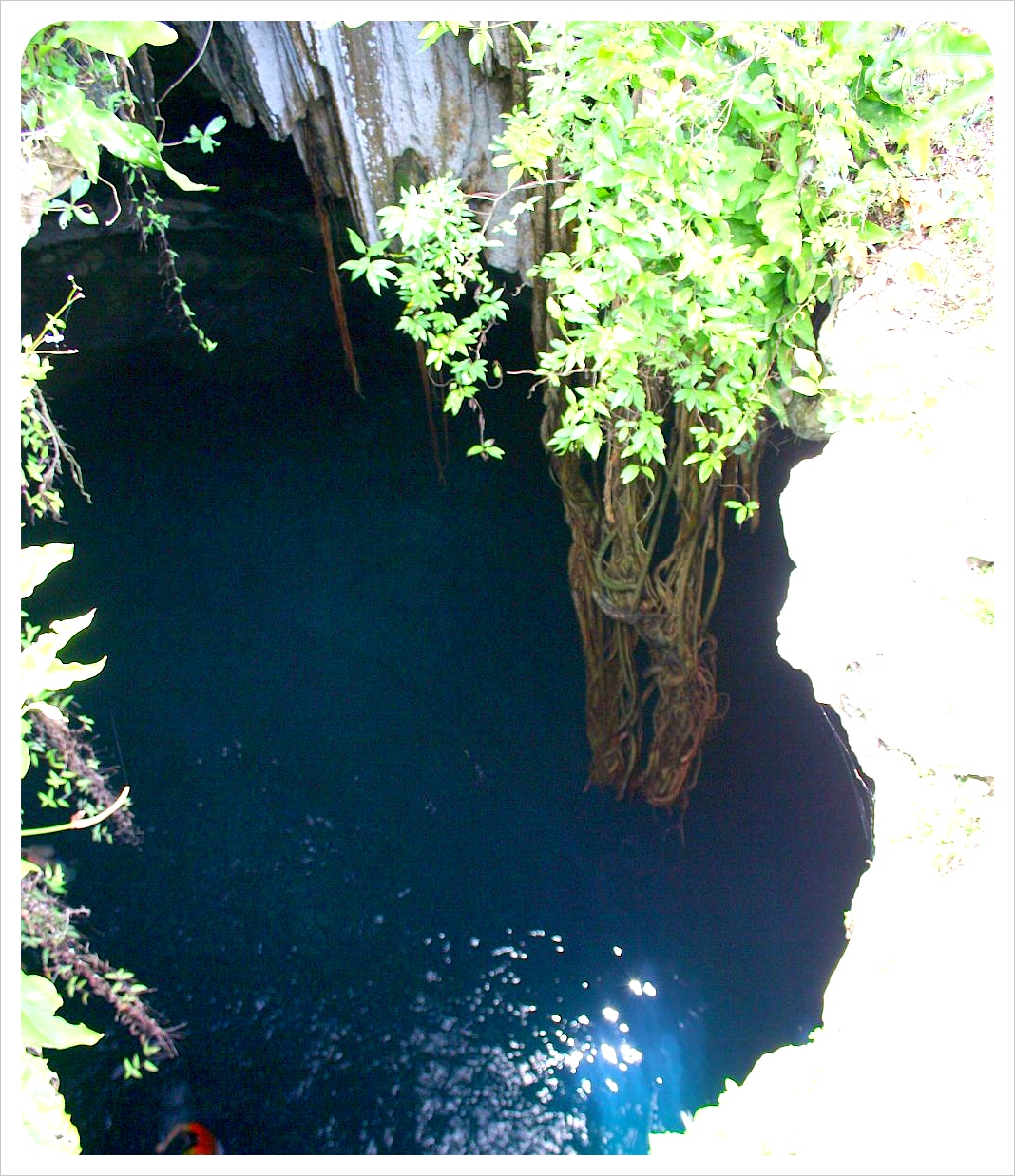 Up, out and back on the horse cart, we bounced, banged and bumped our way to the third cenote, which had the smallest entrance of them all. The end of the ladder leading down was completely hidden and so it was based on blind faith and the echoes of happy swimmers splashing below that we lowered ourselves into the last of the cenotes. 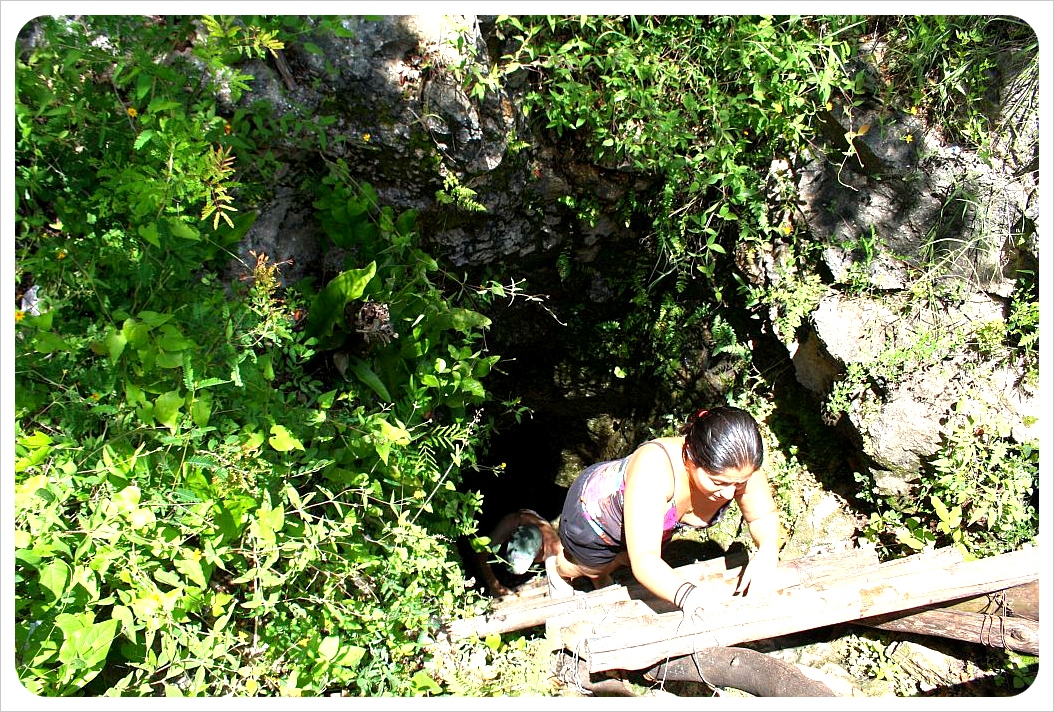 Once inside, the easiest way in to the water was just to let go and jump. The dramatic entrance aside, the water here was equally as clear and blue, with schools of tiny fish circling our feet. 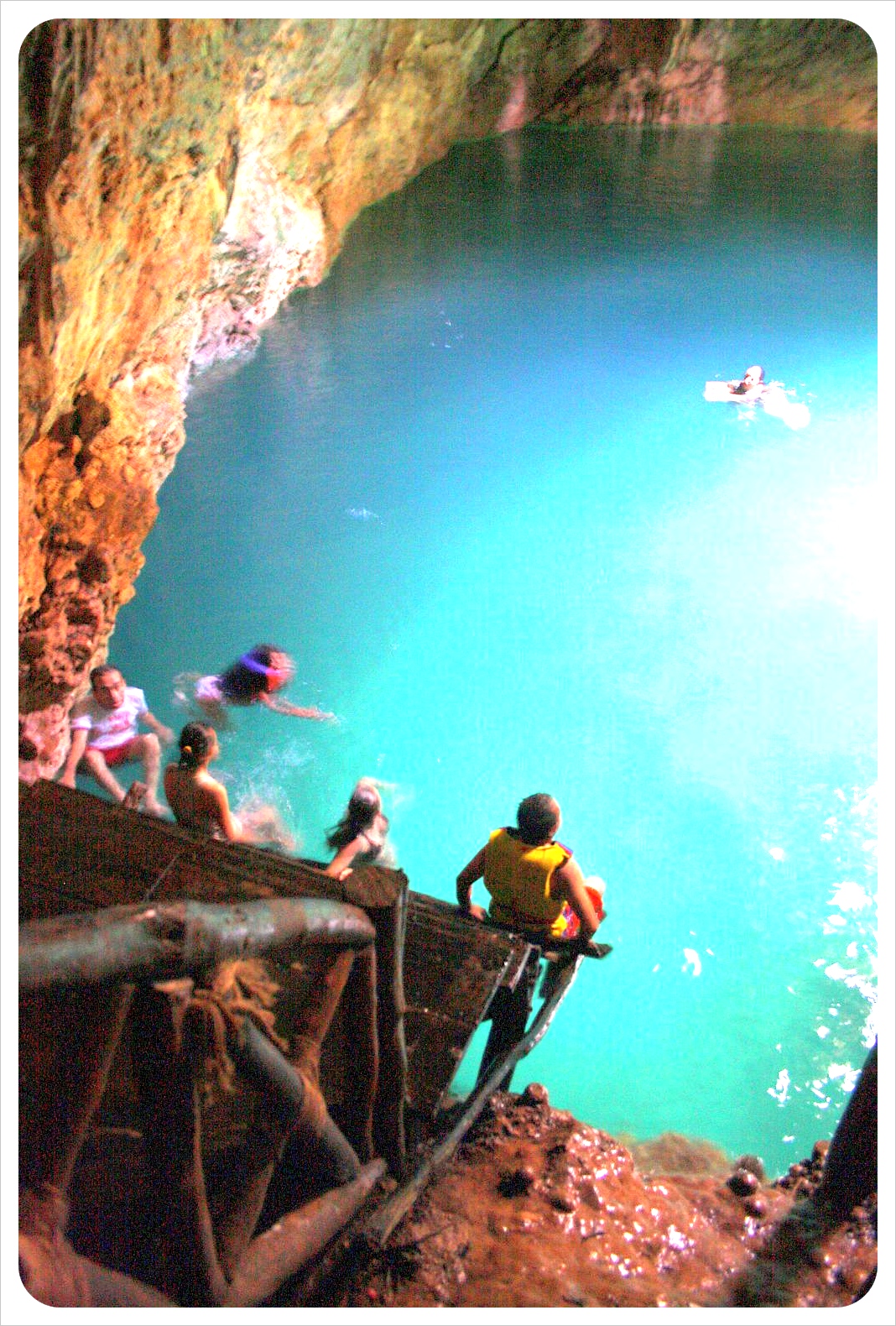 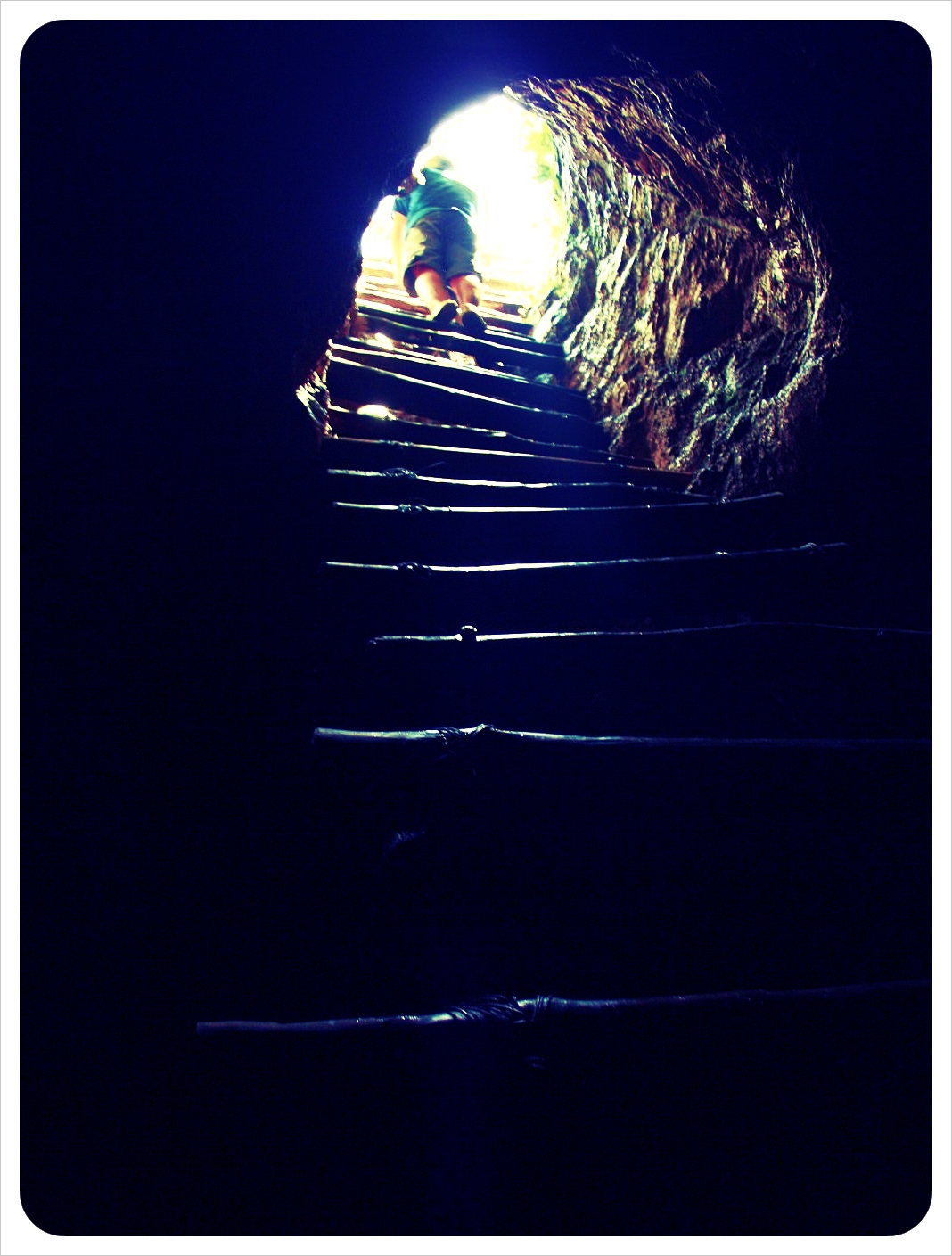 Our driver had to come over yet again and fish us out in order to return back to village on the same bit of track we arrived on. The route is not circular, which means that, as we were speeding in one direction, there had been several carts speeding on the same track toward us (if train A is driving at 20mph and train B is riding at 30mph in the opposite direction, how long until they crash?, that sort of thing).

Shortly after we began our return ride, a pair of carts approached from the opposite direction. We got off, and the driver lifted and pulled the heavy cart off the track himself. We let the two carts go by, and then the cart’s tiny iron wheels were laboriously set carefully back onto the track. We continued on our way until the next pair of carts came and we dismounted again. The driver explained that when only one cart meets two carts, the single cart must voluntarily de-rail. And if two carts approach two carts, I ask. It doesn’t happen much, he says. It seems that they have a system, and even if we don’t know exactly how it works, it works all the same. As if by some form of magic. 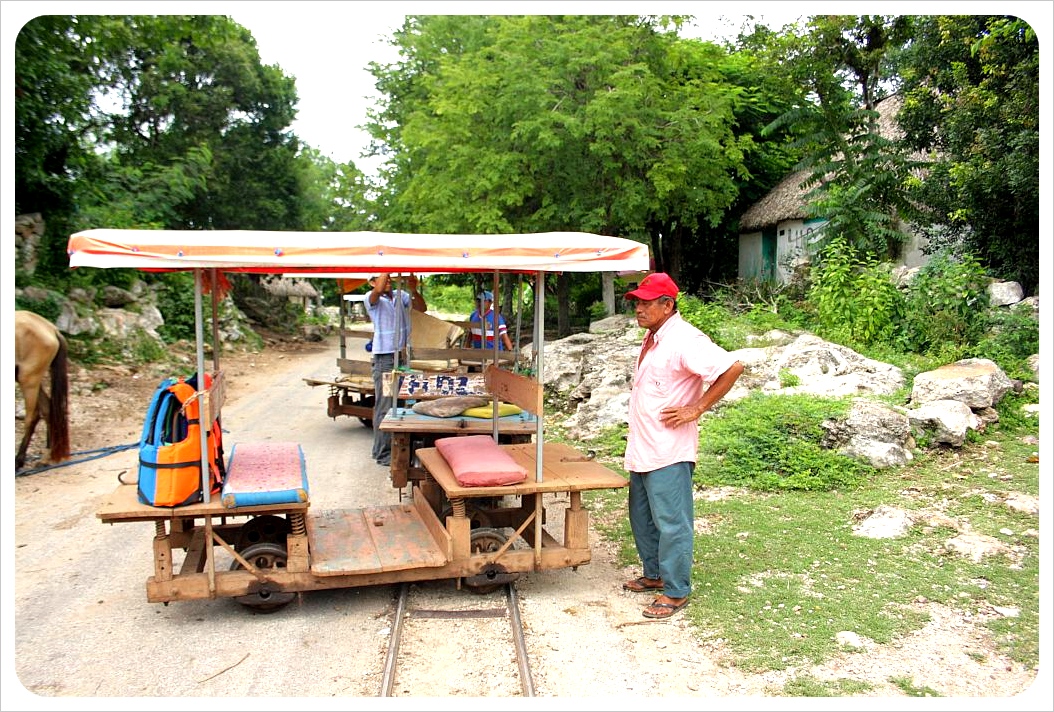 Although the experience is a bit rough around the edges, we would definitely recommend a day trip out to these cenotes near Cuzamá. It’s adventurous, original, well-hidden in the middle of the forest and an experience unlike any other cenote visit on the Yucatan – such as the easy access ones near Valladolid or the severly overpriced ones around Playa del Carmen. 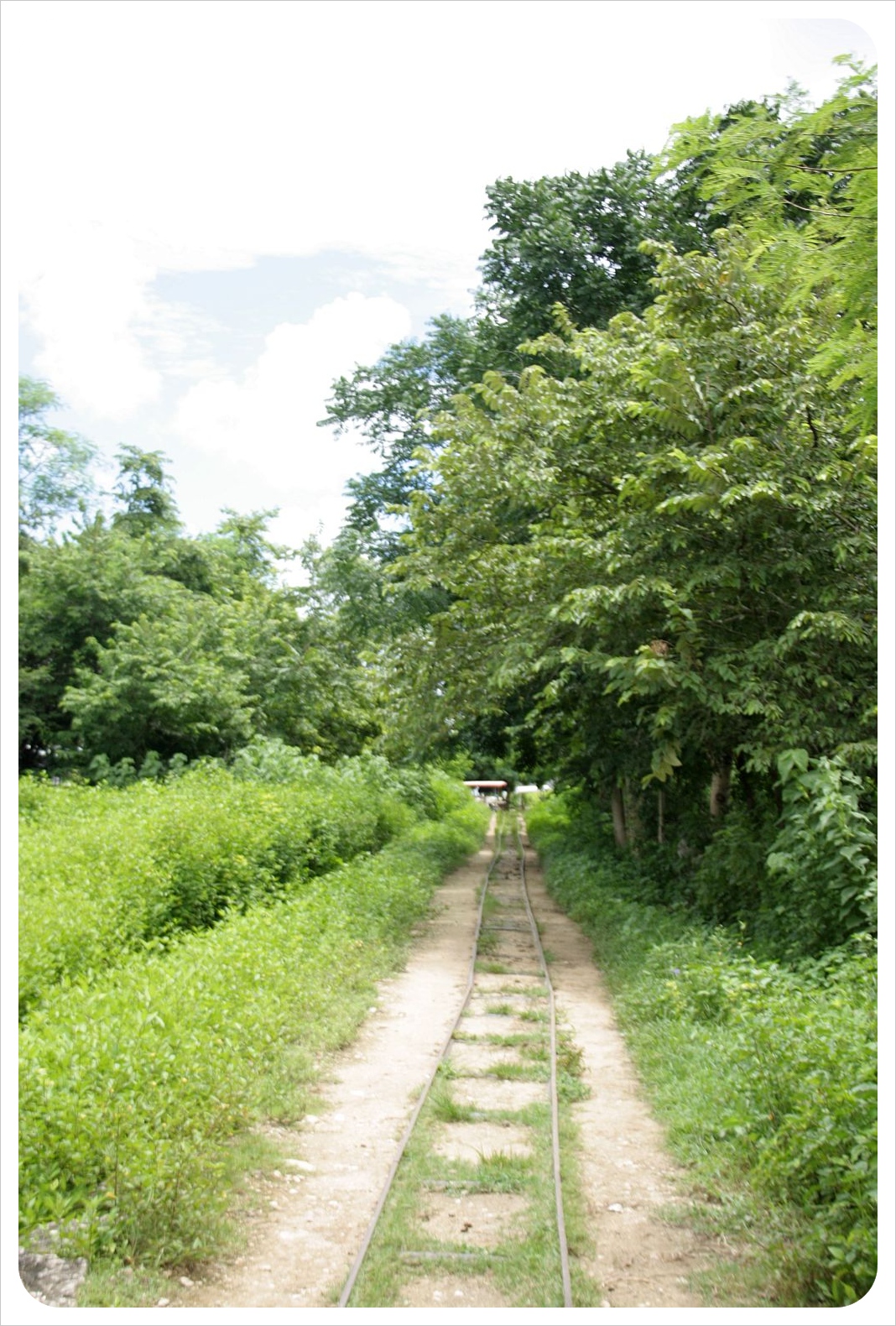 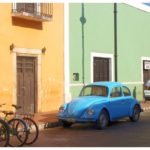 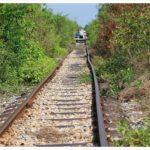 Polaroid of the week: Temple of the Jaguar
Click here to cancel reply.

hi there! I am planning on visiting these cenotes when I am in Merida in two weeks. Was it easy to catch a colectivo back to Merida from Cuzama after you were finished the tour of the cenotes? Do you know how frequently the colectivos and buses make this return journey?

Sorry for the late response, Brittany - But yes it was easy to get back to Merida from the cenotes. I don't remember how often they went but I don't think we waited long... they go all the time. Enjoy!! :)