You can read about the first part of the trek, my hike through the Negev Desert, here.

When we started our hike on the third day, the scenery couldn’t have been more different from the first two days of desert trekking. Instead of the expansive, ocher colored landscapes of the Negev Desert, we found ourselves in the Judean Lowlands with lush green hills. 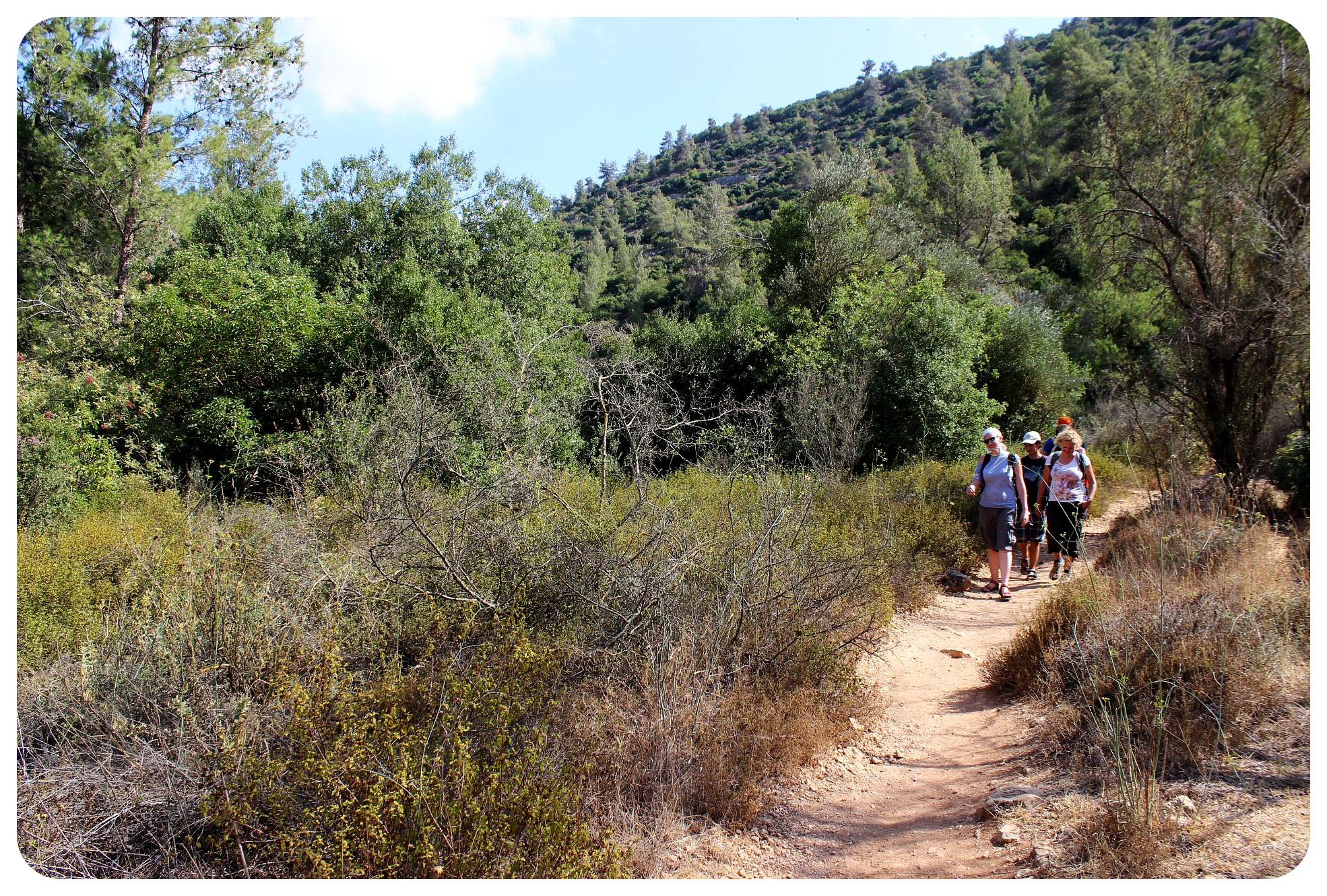 Pine trees were wrapping their surroundings in a mesmerizing scent, and birds were chirping. In the desert, there had been barely any sign of life. We hiked up Tel Azekah, a hill with wide open views over the the Mountains of Jerusalem and the Valley Of Elah where, according to the bible, David battled Goliath. The mound itself is known for its burial caves from various periods and secret tunnels from the days of the Bar Kokhba Revolt. 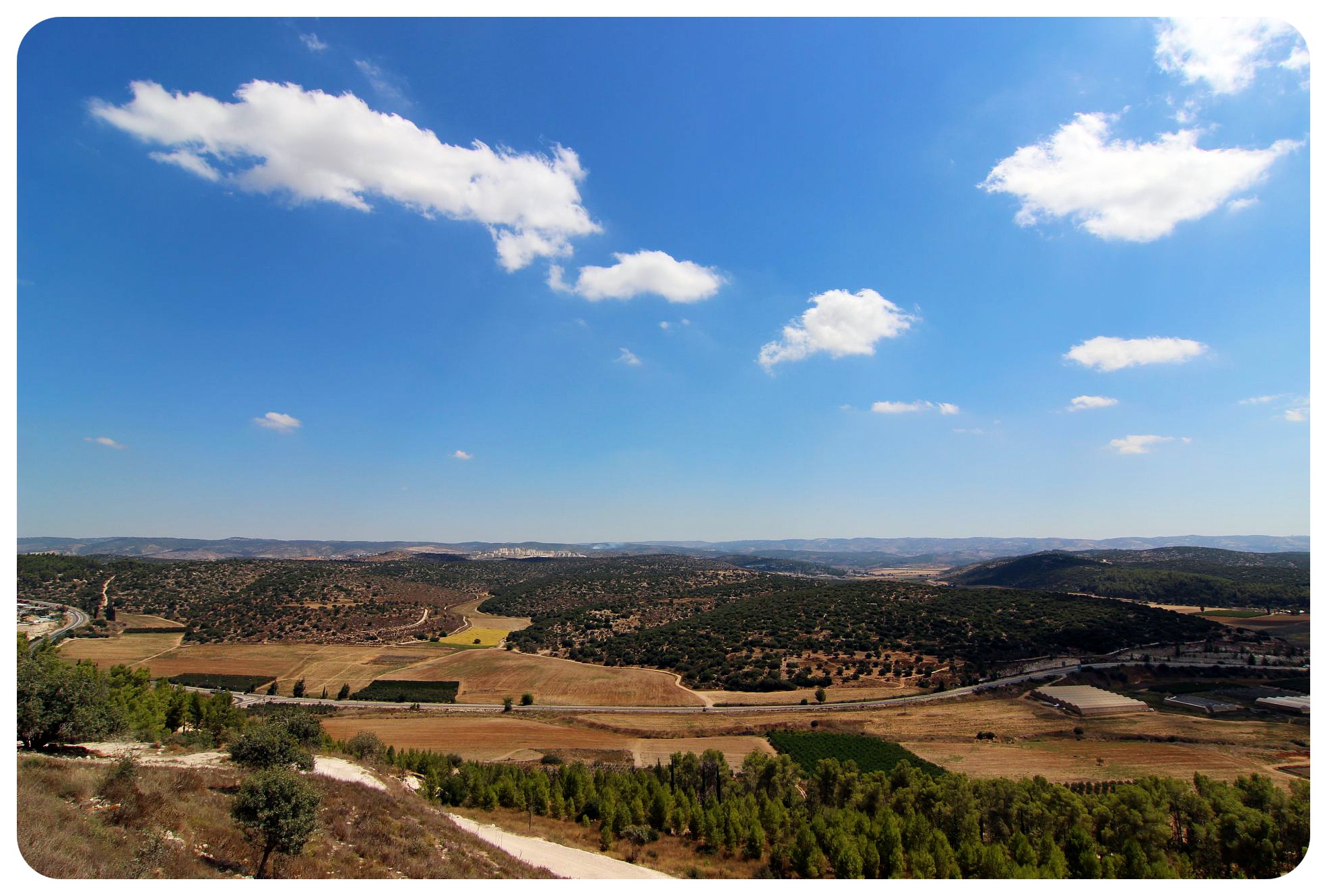 After a short introduction to the area and the events that led to David beating Goliath, we interrupted our nature hike to visit Jerusalem, Israel’s capital and most likely the most significant religious city in the world, but since I returned to the city for a whole week later in my trip, I will talk about Jerusalem in a separate post – and the city deserves a whole post in itself.

We then continued our trek on the National Trail in the Lower Galilee region in northern Israel and climbed Mount Tabor, also known as Mount Of Transfiguration. Mount Tabor is a stand-alone mountain, emerging majestically from the flatland area around it. It is famous for the Franciscan Church Of The Transfiguration that sits on its peak, and you’ve guessed it, for being the site of the transfiguration of Jesus. 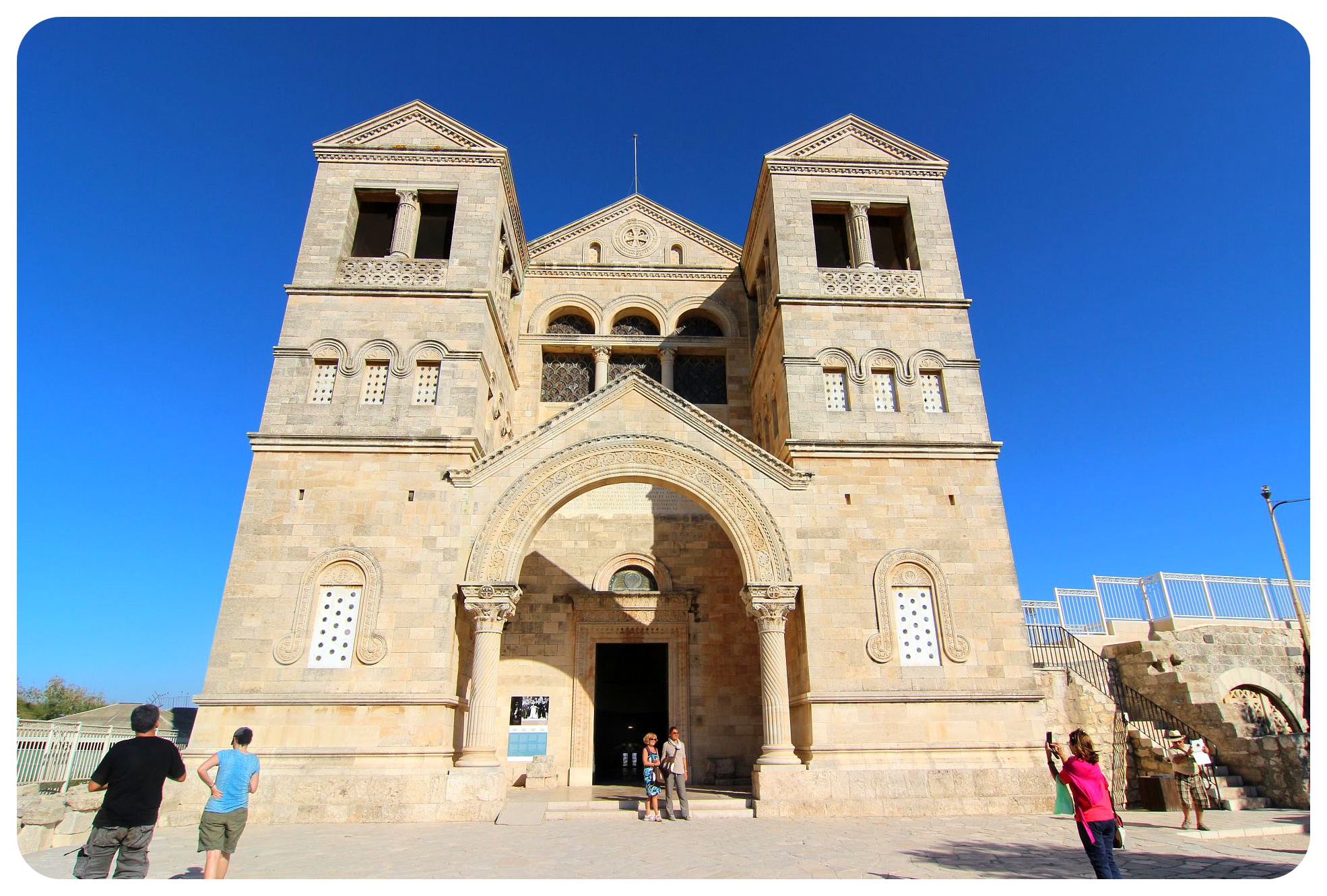 Looking at the green fields at the bottom of the mountain, it seemed surreal that I had just traipsed through the desert a couple of days ago. This is one thing I love about Israel though – despite being such a small country (8,522 sq mi – smaller than the U.S. state of Maine, or one sixteenth of the size of Germany), the landscape is more diverse than in any other country of comparable size that I’ve visited. 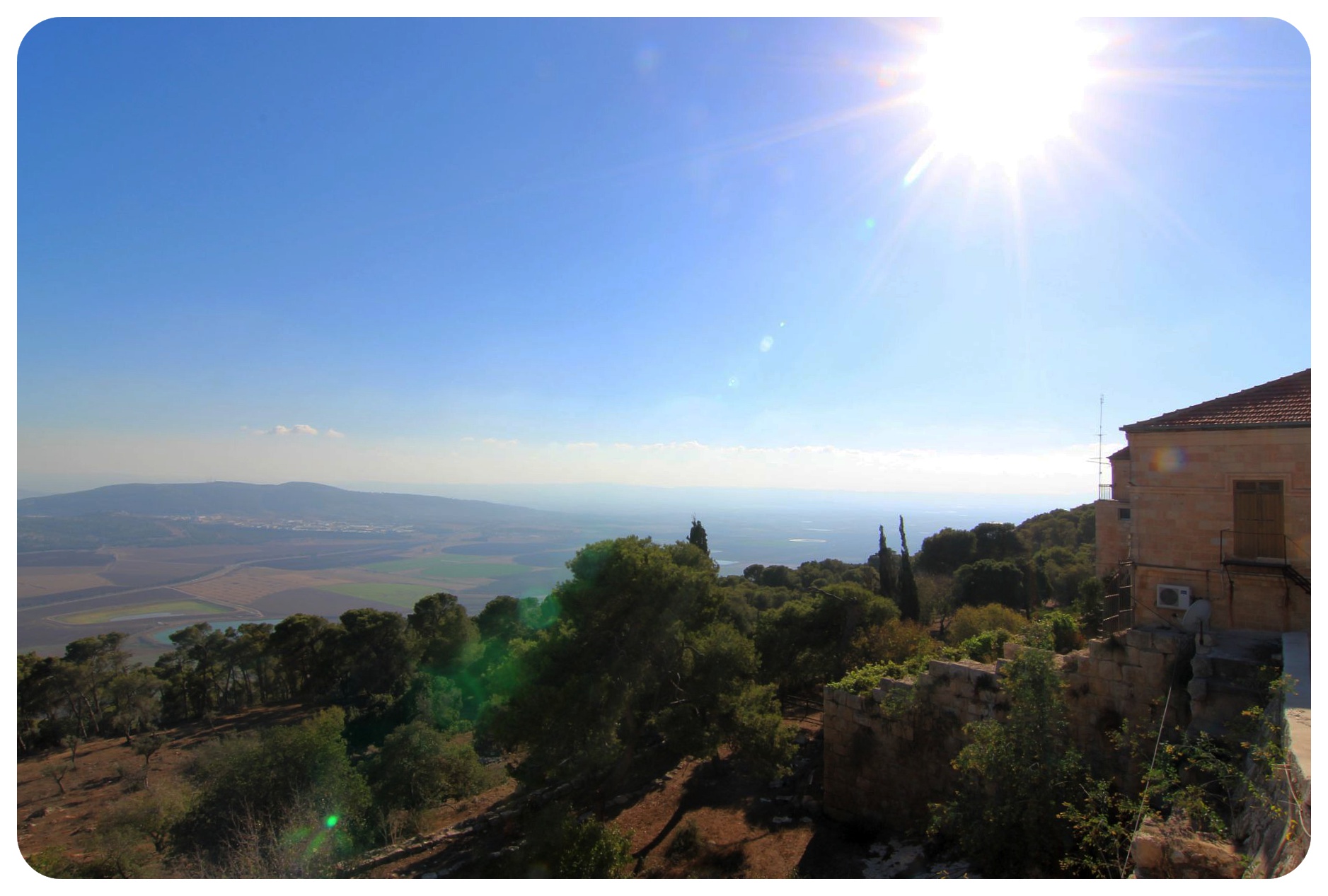 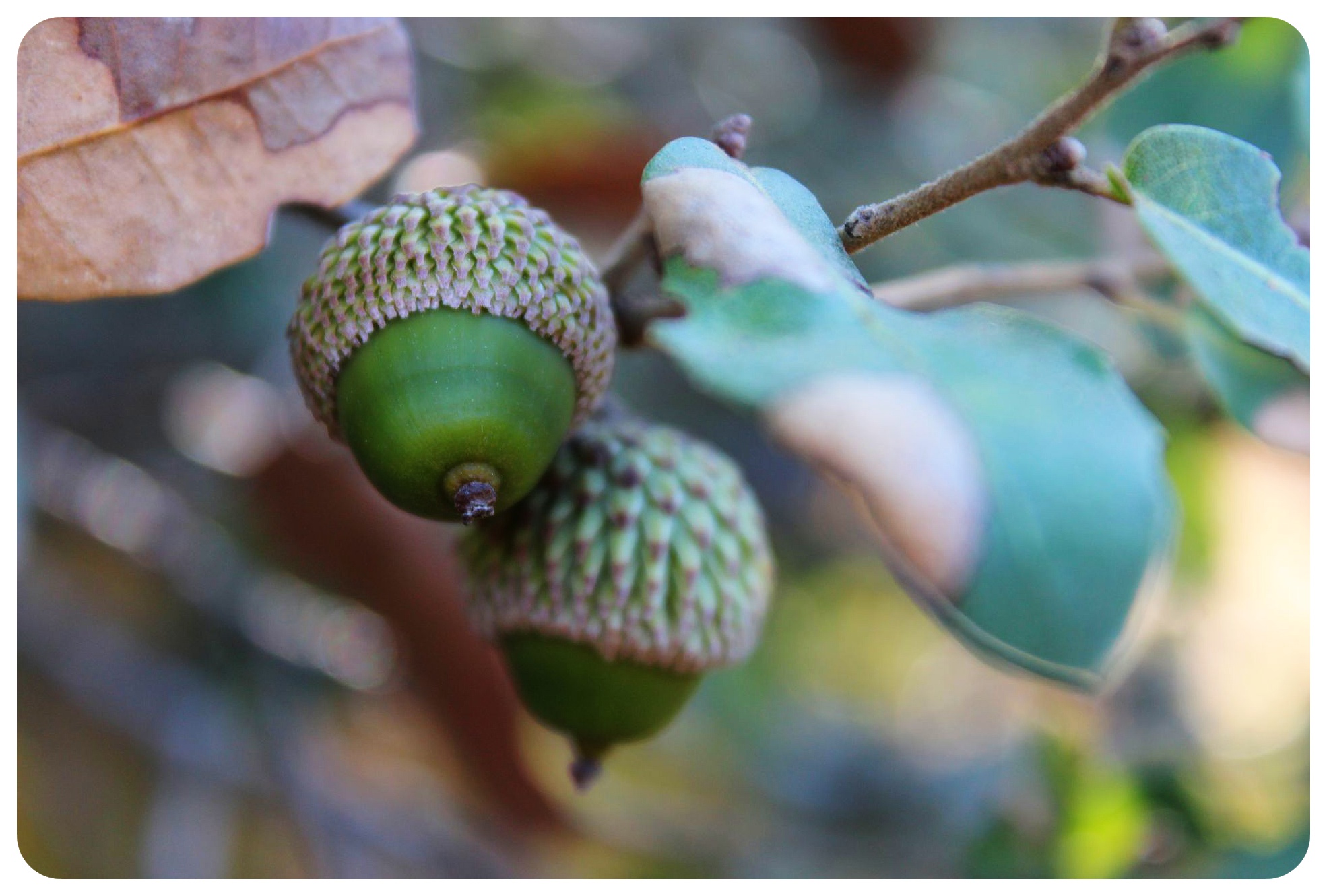 Hiking the entire 620 mile (1,000km) National Trail is quite an undertaking, but it is possible to do it independently – as long as it planned right. The biggest and – in my opinion – most stunning part of the trail goes through the Negev Desert, where settlements are sparse and water is hard to come by. Most people either hide water rations in stashes that are commonly used by hikers or arrange for people to meet them and supply them with water and food. (See below for more information on how to prepare for a hike of the INT.)

Our last big quest was to conquer Mount Arbel, where you can still see (and enter) dozens of caves that had been inhabited by Druze settlers three hundred years ago. These Cliff Dwellings reminded me a lot of the ones I visited in New Mexico last year and I was surprised about how similar life had been for the settlers in North America and here in Israel, thousands of miles and an ocean away from each other. 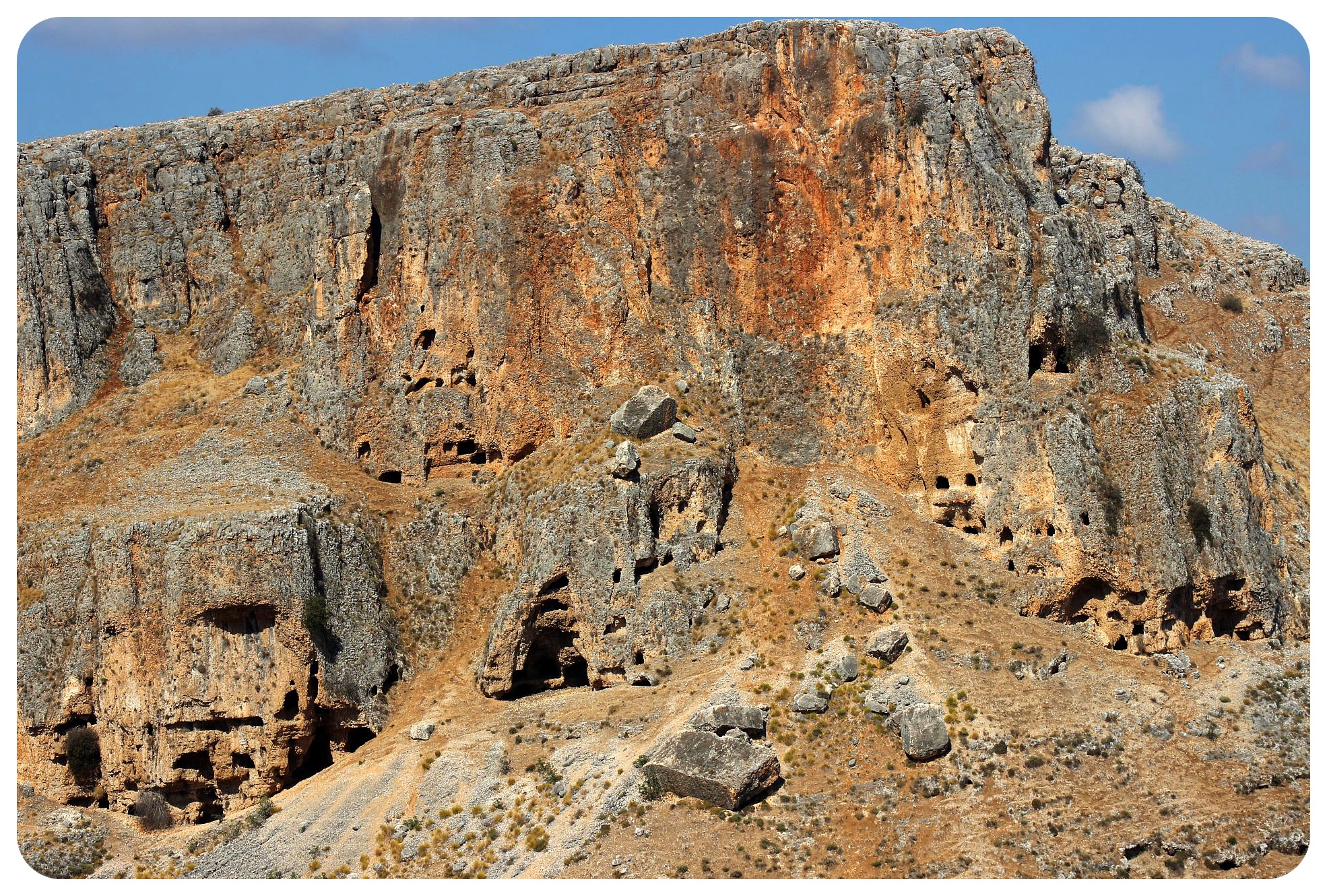 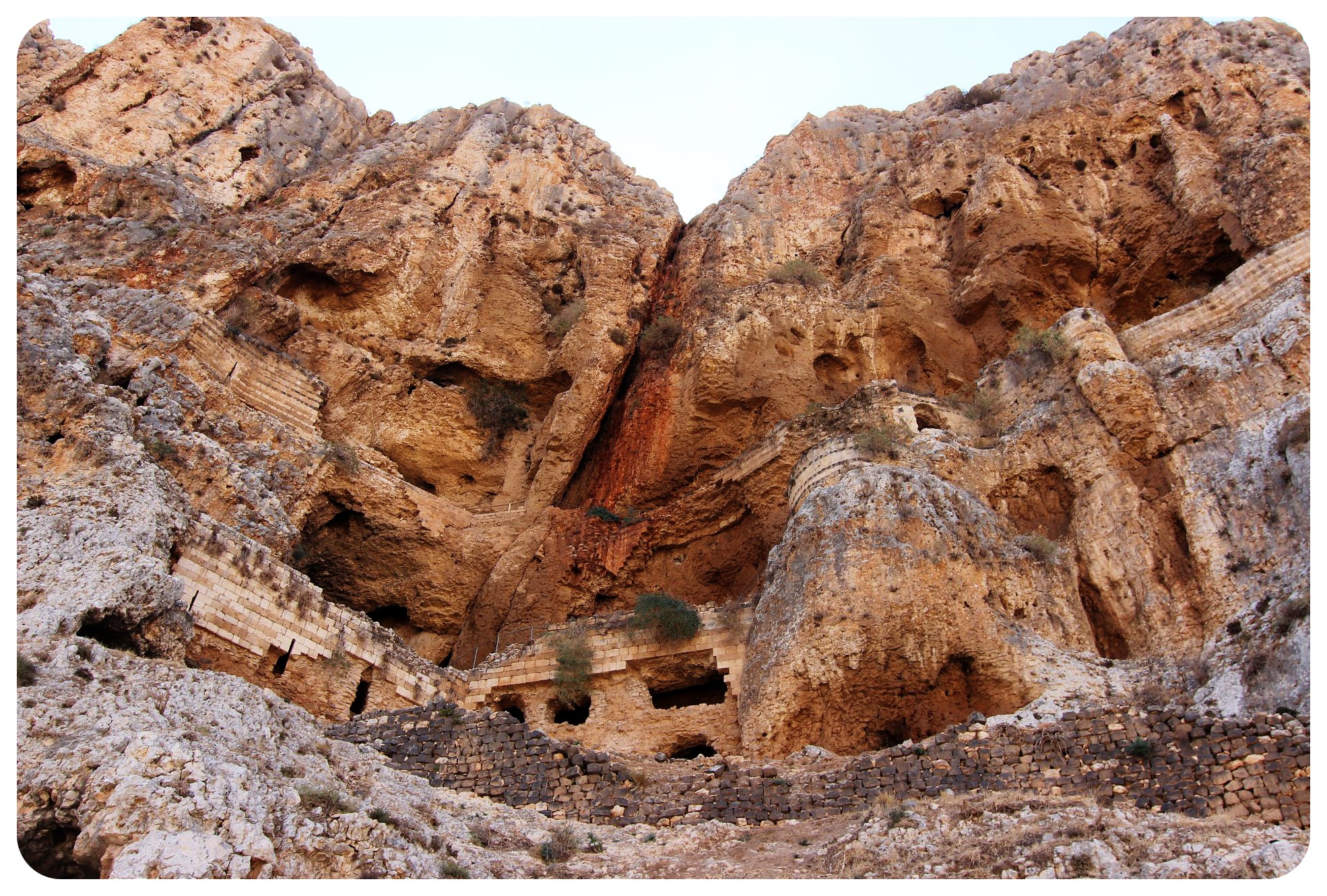 When we reached the peak of the mountain, we were rewarded with sweeping views over the Sea of Galilee, where many of Jesus’ miracles occurred, including him walking on water and him calming the storm. We enjoyed a coffee break right the rim of steep cliffs (1,250 ft / 380m high) – a coffee maker is something that is brought on every hike in Israel, I was told – while looking out over Arab villages, date palm orchards and avocado plantations of northern Israel. We could see as far as the mountains of the Golan Heights, which reach well into Syria, and I was once again surprised about the inherent natural diversity of this small country. 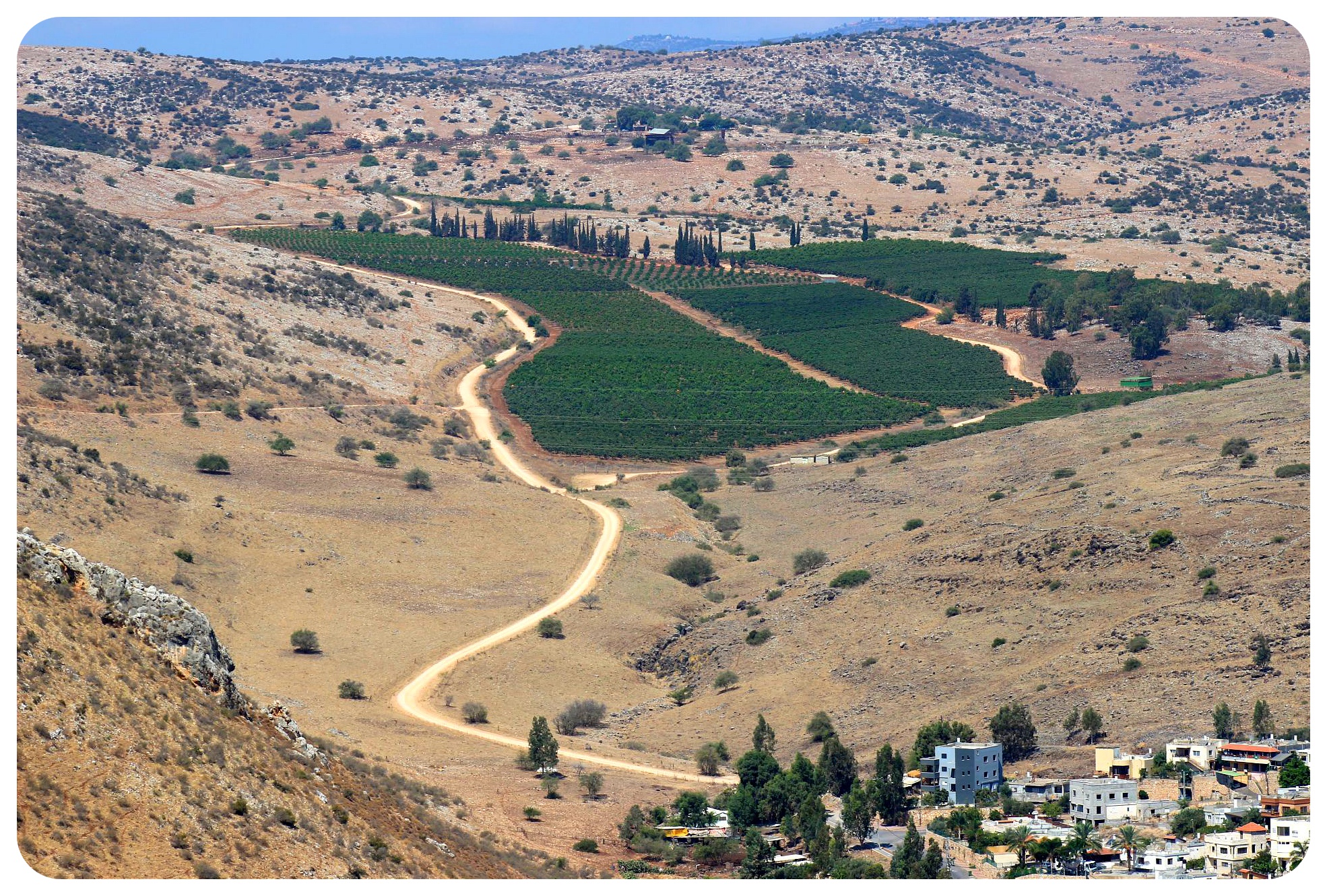 Almost as much as the country is diverse in its landscapes, it is diverse in the religious communities that live here together – in some places more, in others less peaceful. The trail passes Arab and Jewish settlements, sometimes villages that are home to both, it passes Christians, people of the Bahá’í Faith and Druze, a small religious community we got to know in the Lower Galilee when we had the pleasure to be invited for dinner at a Druze family’s house, enjoying some of the best food I had in my entire time in Israel, while learning more about this little-known religion. It was fascinating to hear about their beliefs, traditions and history first-hand, and the people you meet along the INT are undoubtedly a vital part of the experience as a whole. 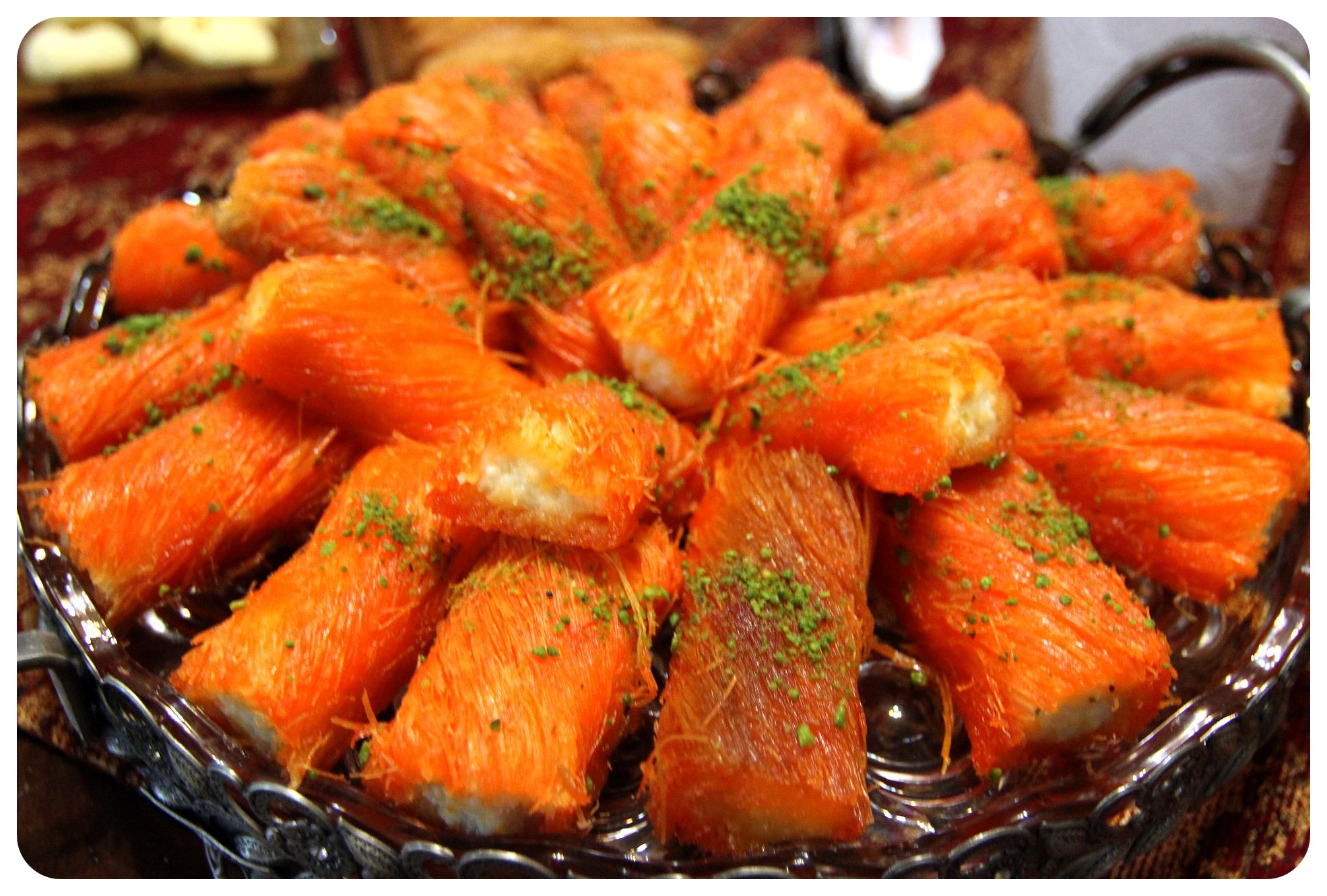 This is what makes the Israel National Trail so special, compared to other long-distance hikes: the combination of historical and biblical places, magnificent and varied landscapes, urban experiences and a glimpse into Israeli life, plus the distinctly different people you meet along the way,  all of which add up to an incomparable experience. 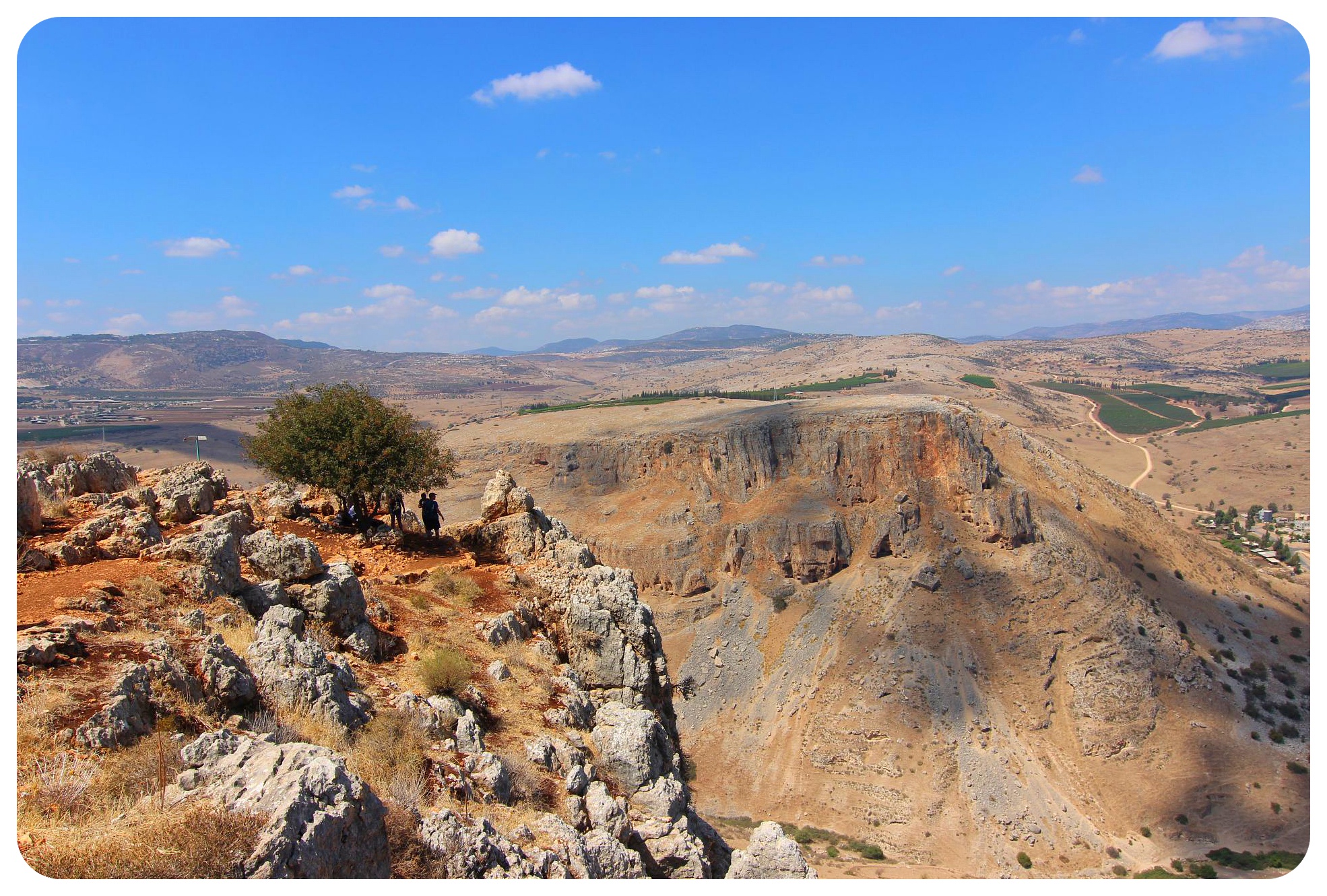 After this hike, we all felt like we had deserved our last stop of the trek: the Jordan River. It was here where Jesus was baptized by John the Baptist, but we had much less biblical things in mind when we got there. A cold beer, a refreshing dip, and a foot spa, which was available free of charge from the hundreds of little fish in the river that eagerly nibbled on the access skin of our feet while we were enjoying having slipped out of hiking shoes for the very last time was the perfect way to end our trek. 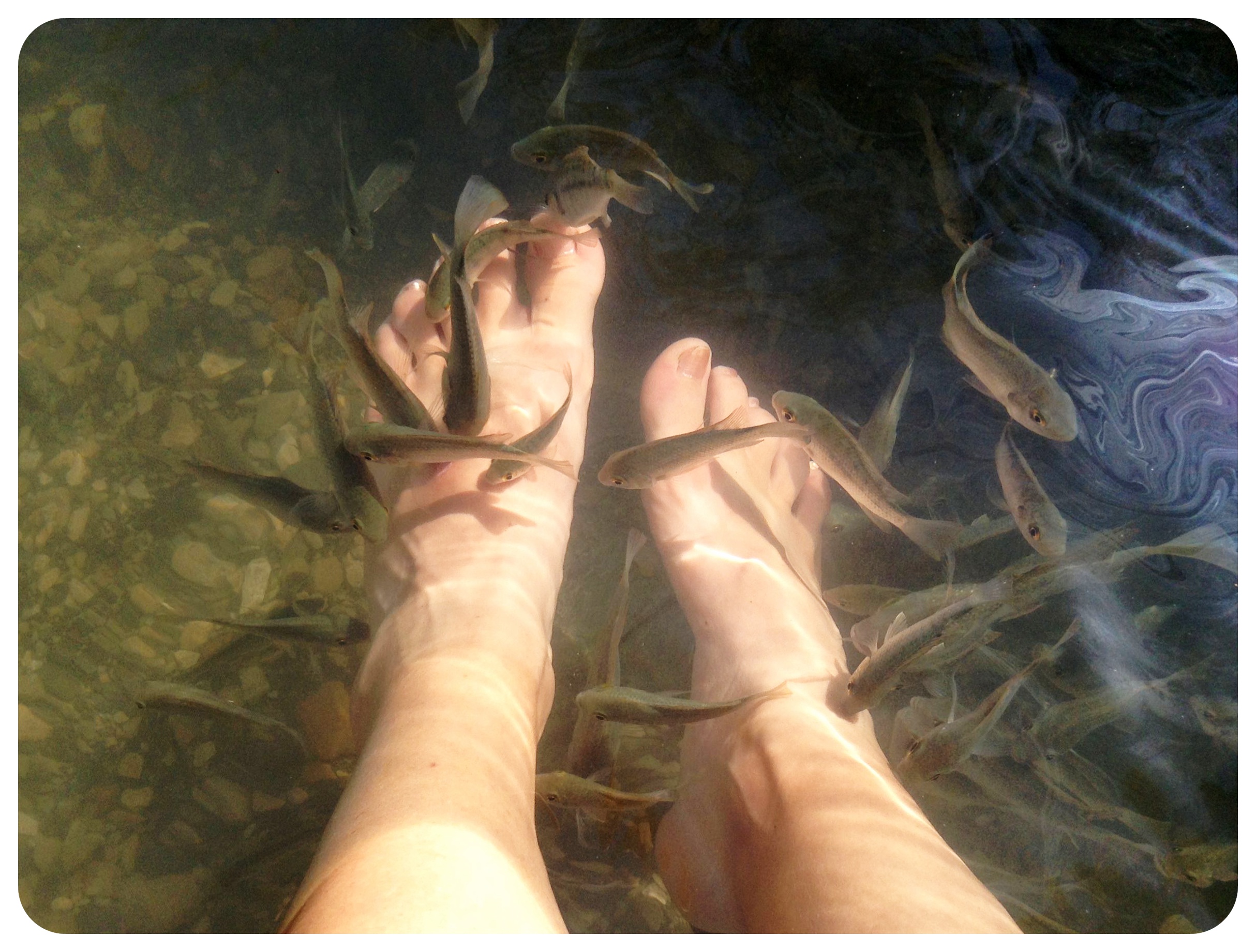 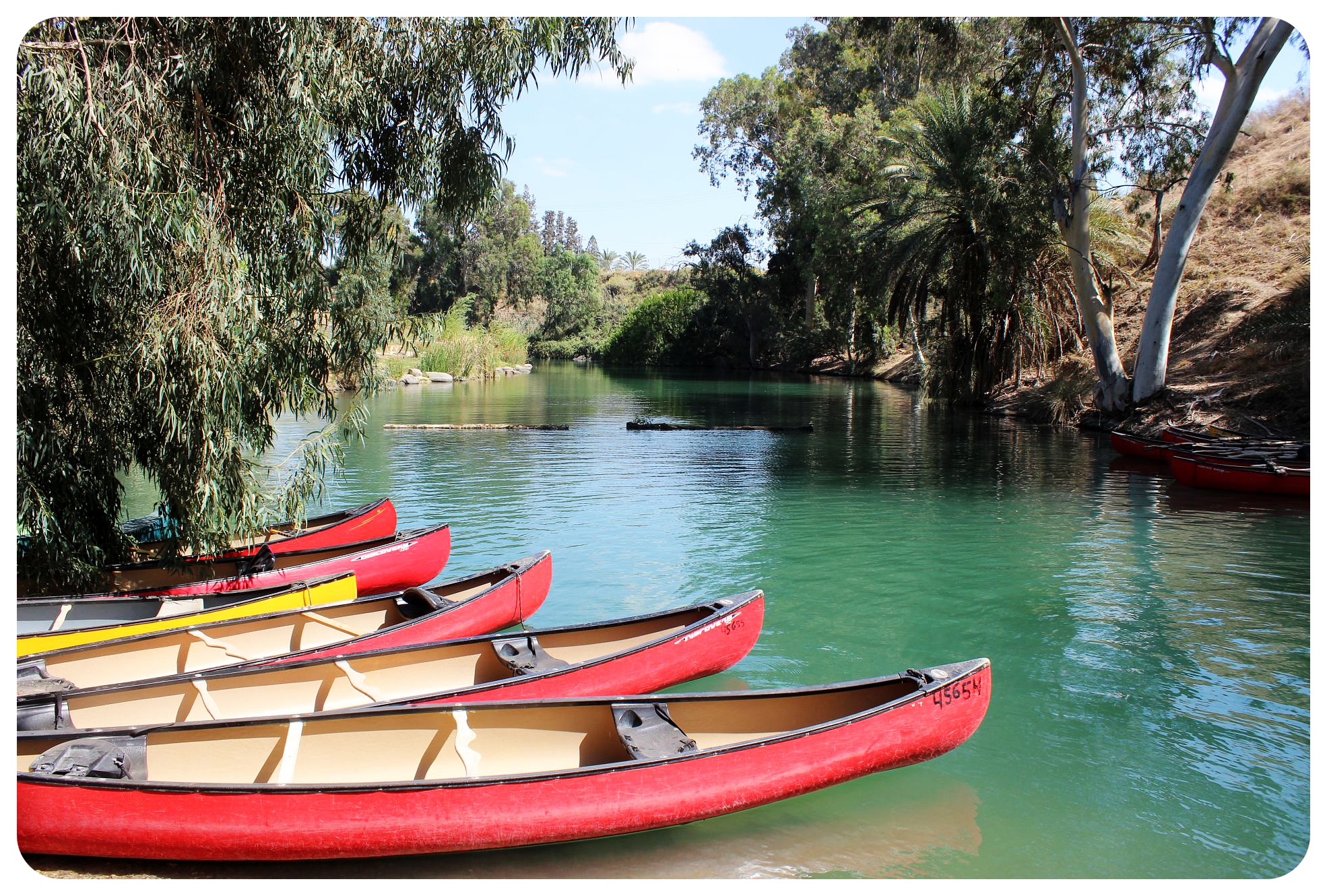 While on the one hand, I was relieved that the strenuous hike was over and I’d get to enjoy Tel Aviv’s city life, I felt like I had so much more to explore on Israel’s National Trail. The parts I had walked were just a teaser of the full route, whetting my appetite for more, but I couldn’t have gotten a better introduction to Israel than the week on the INT. I hope I’ll get to go back and hike the path in its entirety one day. 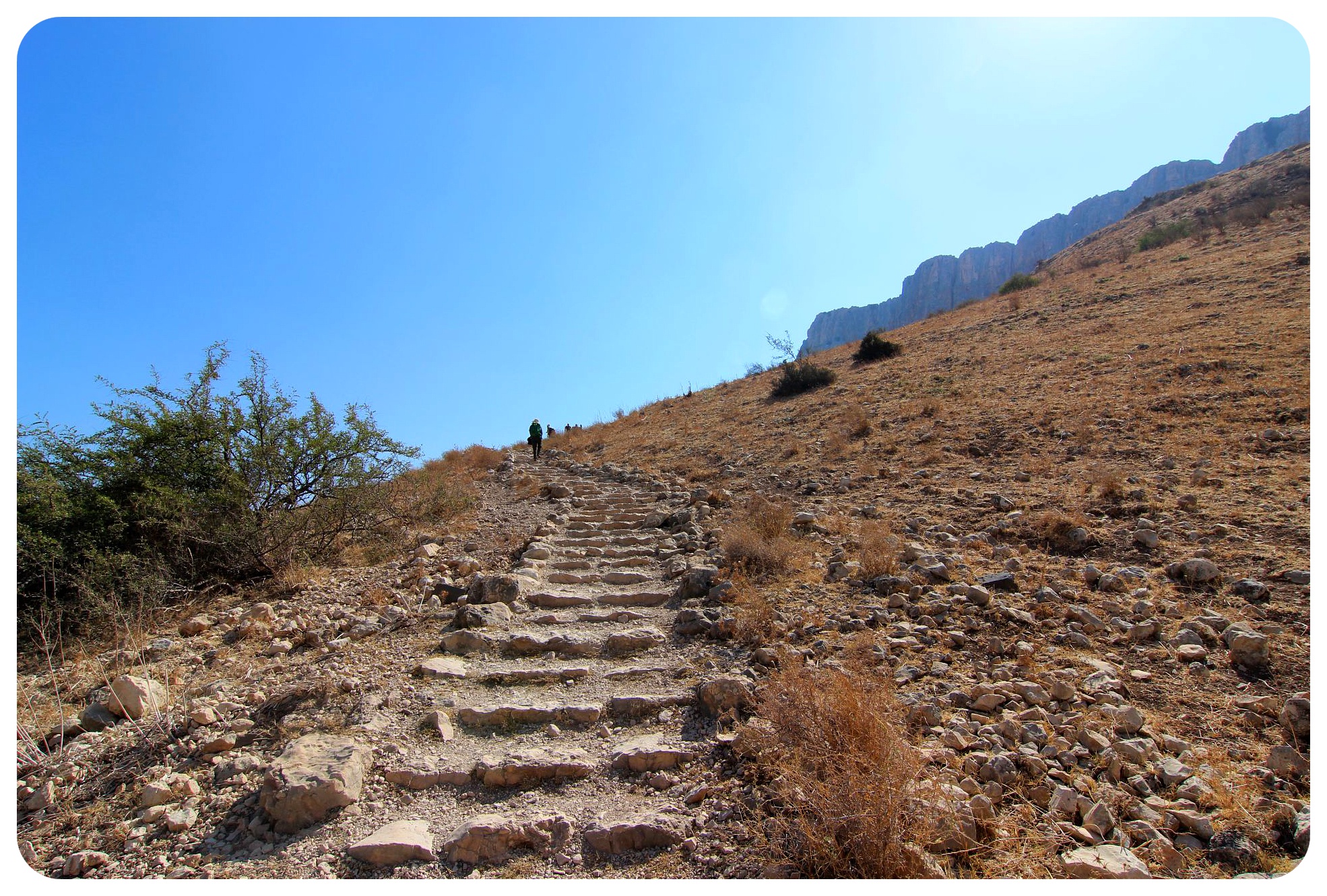 Practical information: How to hike the Israel National Trail

There is a comprehensive guidebook available in English, including detailed topographical as well as road maps, information on what you need to pack, where to set up camp and where to replenish your supply /cache water, and even contact details of people who offer water deliveries to the desert. This book also has information on the places you pass along the trail, detailed day-by-day treks and a list of Trail Angels. You can order the book on Amazon: Israel National Trail and the Jerusalem Trail (Hike the Land of Israel)

. It is also available in the Stiematzky book store at Ben Gurion International Airport in Tel Aviv (outside the baggage claim).

Judith Galblum Pex wrote a book about her experience walking the National Trail, called Walk The Land. You can order it on Amazon here: Walk the Land : A Journey on Foot through Israel 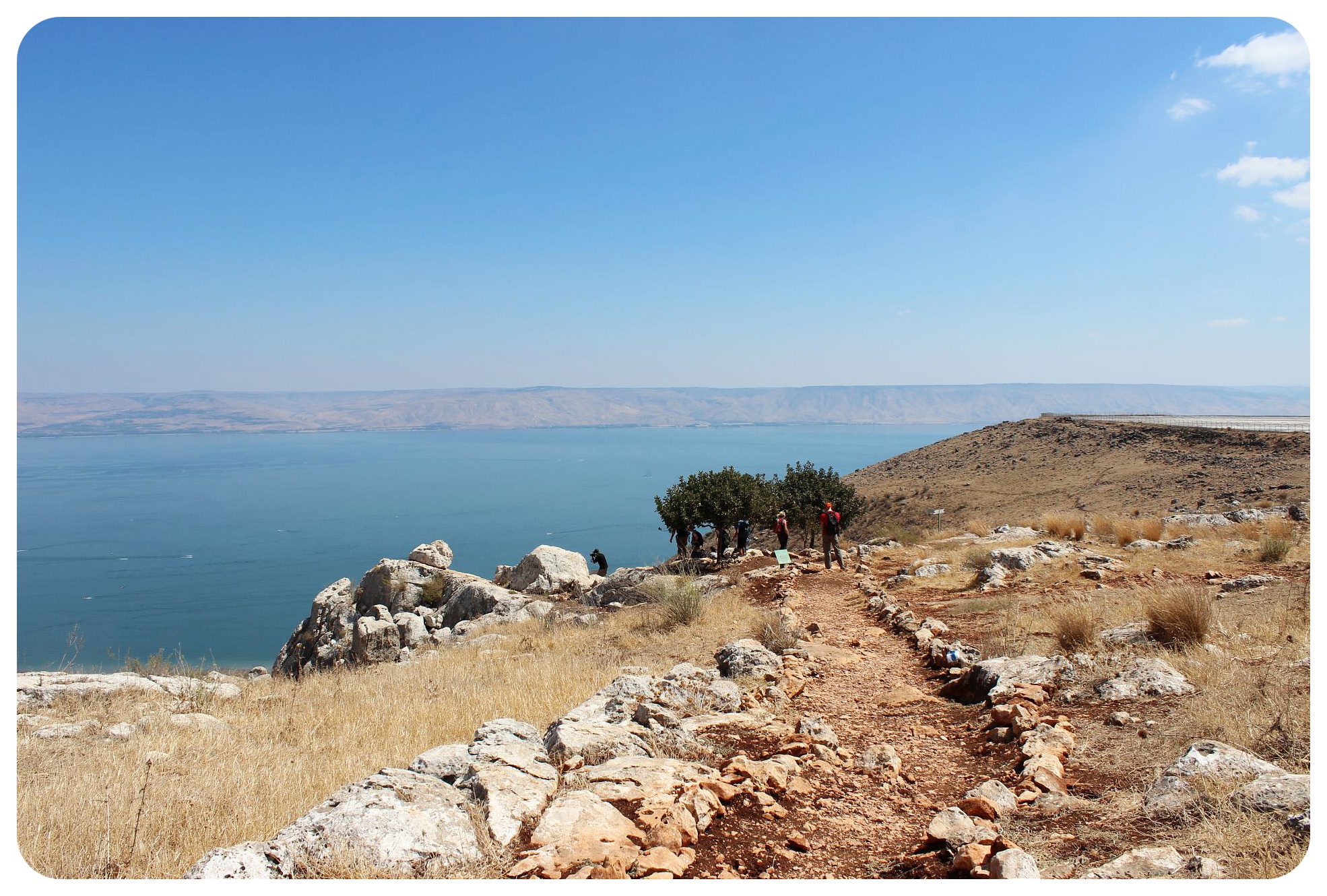 I would suggest taking a long walk (and increasing the distance) for a couple of weeks prior to starting the trek. Do a couple of test hikes in your city/ a nearby forest with the backpack you’re planning to bring to see how long you’re able to walk with the weight. Five liters of water per day are necessary, and weigh more than you think. A couple of practice hikes with your backpack will allow you to get rid of some things should you realize your pack is too heavy. If you are an experienced hiker, you shouldn’t need too much preparation, provided you are in a good physical condition. 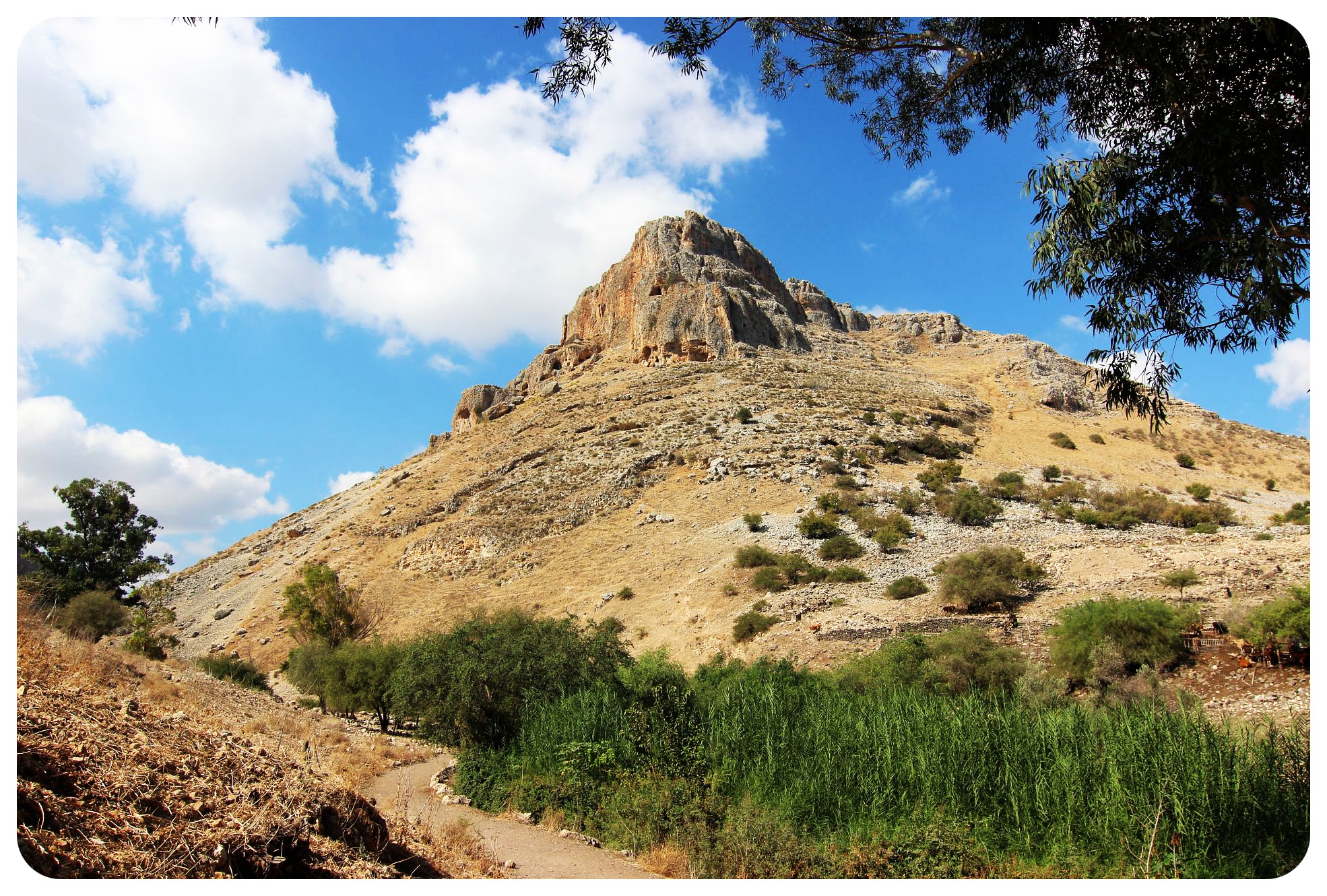 How long does it take?

If you’re planning to hike the entire Trail, it will take you between six and eight weeks.

The INT Forum on IsraelNationalTrail.com is a great resource for all gear and packing related questions. 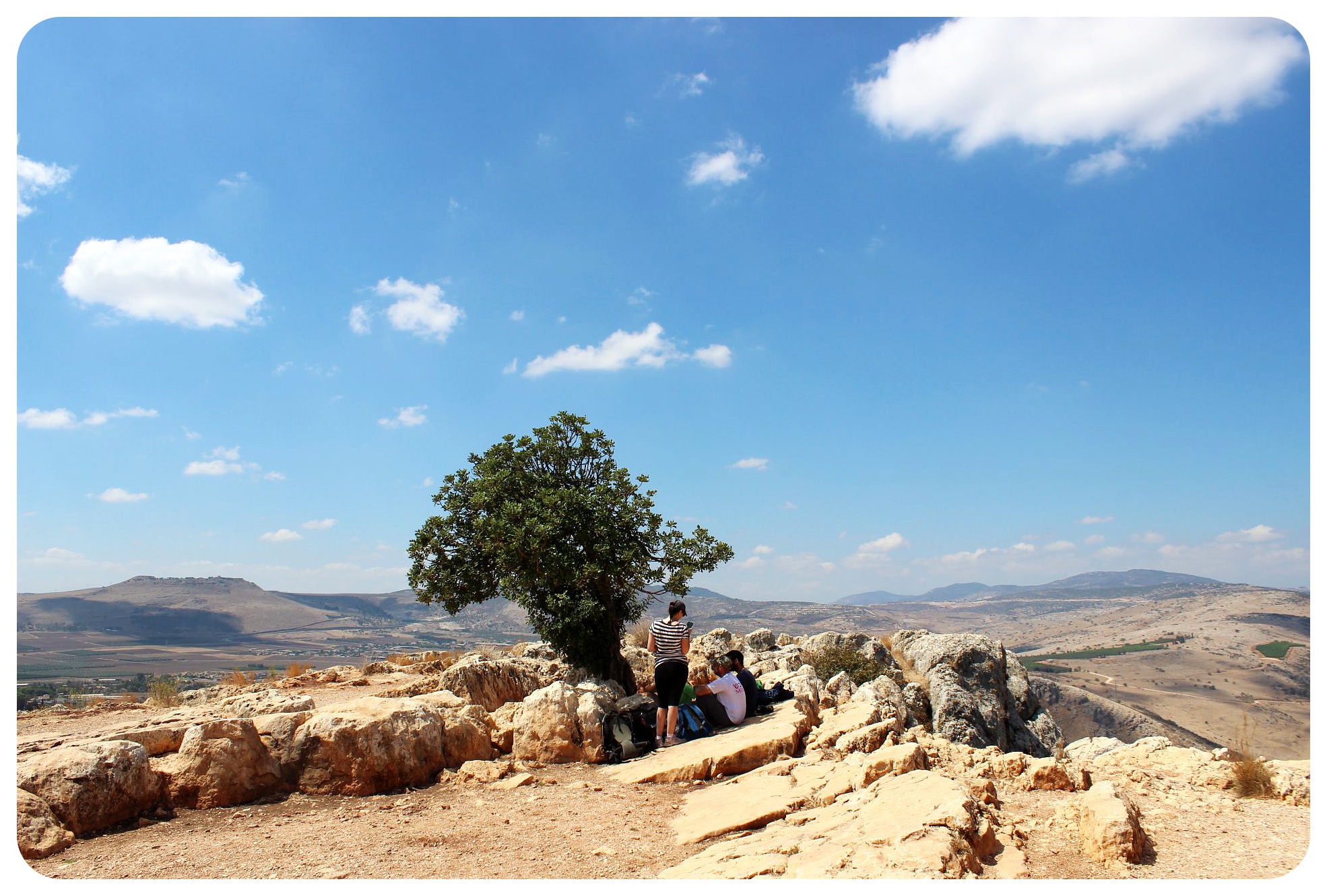 Don’t even try to hike the INT during the summer months – it is just too hot, especially in the desert part – and 60 per cent of the country are desert.

September until November would be perfect, or any time between late February and May. The winters can get pretty cold, especially in the north.

North to south or south to north?

North to south – and Wikitravel has an excellent list of reasons why: Where should one start? 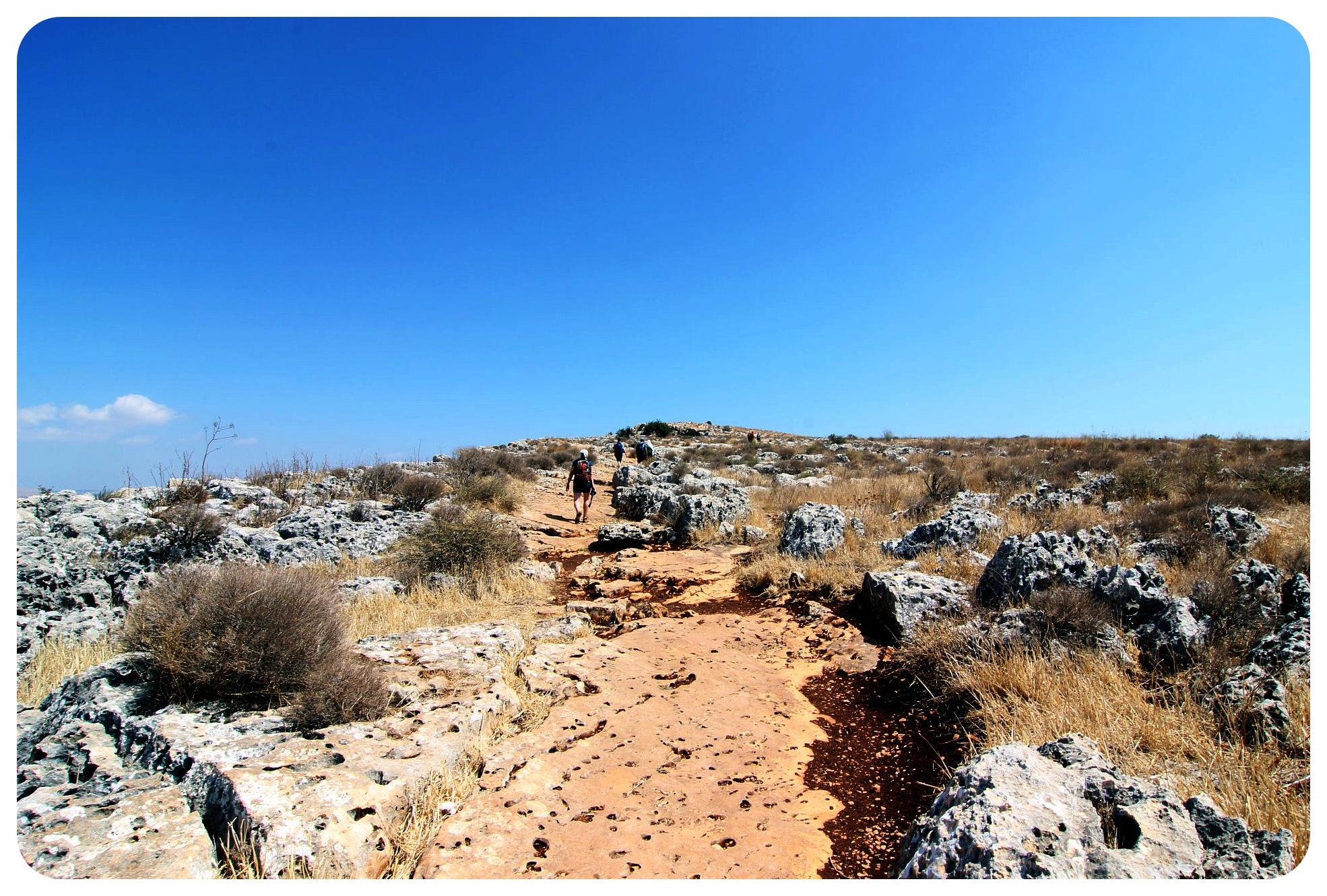 How to get in touch with Trail Angels

There is a list of Trail Angels in English on the INT Wiki, listed by region. There is also a list of low cost accommodation along the trail.. In total, there are about 150 Trail Angels. All of them offer either hot showers, a bed, a hot meal or a place to refill your water bottles.

Make sure to call the Trail Angels before you head there- they might not be around or not have any availability that day.

It makes sense to pick up a SIM card with data for such calls, but also to have a map available and to be able to look something up online when you’re on the trail. This site has a good overview of prepaid SIM cards with data in Israel. Note that there is not everywhere a signal though. 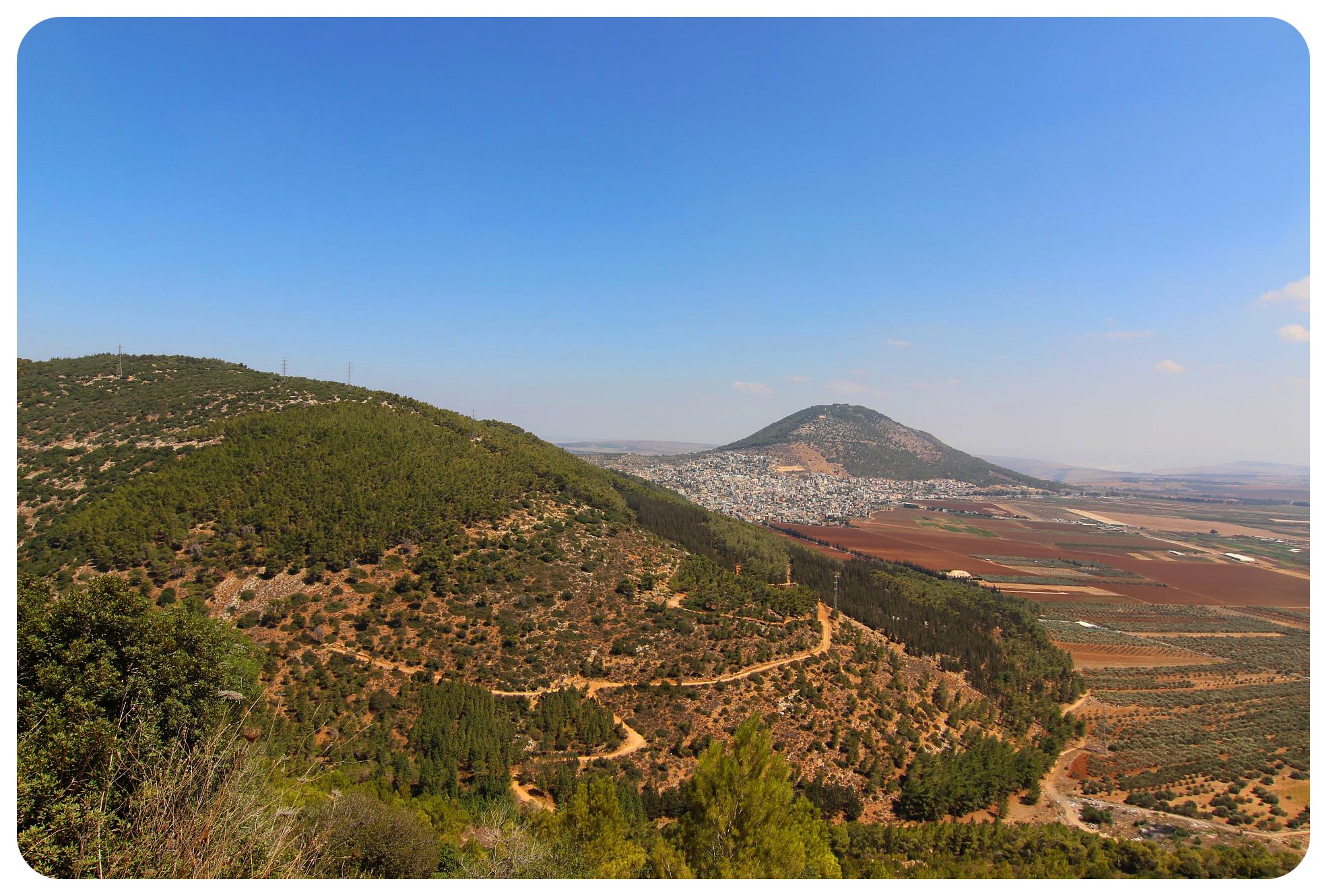 Where can you find more information?

The above mentioned INT forum is a wealth of information for any trail-related queries and you can post your own question in the forum. The IsraelTrail.net website has a great Resources Page with links to other websites about the trail. They also have an FAQ Page that answers all of the major questions people have before setting off on their hike, plus links to other sources.

American Julian Bender hiked the INT a couple of years ago and kept a detailed diary on his experience, plus information on trip preparation, packing, etc.

Diana Barshaw also chronicled her INT treks on her website along for advice for novice hikers and packing lists – she hiked the trail in shorter segments, which is another option to do the trek: instead hiking all of the trail at once, many people hike shorter segments in weekend or week-long trips.

If hiking the trail by yourself isn’t for you, you can join the Walk About Love, an annual INT group hike that starts every spring in Eilat and finishes in Dan 81 days later. Anybody can sign up for it, and it is also possible to join for shorter segments, as long as you commit to at least 12 days.

The red line in the picture above shows the route of the INT through all of Israel. 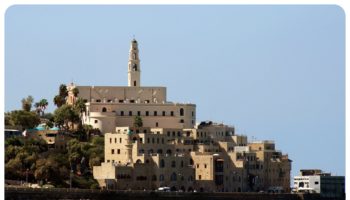 Hotel Tip Of The Week: Hotel Casablanca in Manhattan, NYC