London is rumored to be notoriously expensive and the British Pound Sterling is usually very strong, making it more expensive to visit this exciting metropole for almost any nationality. Most visitors struggle to keep their costs low when exploring England’s capital, but there are a few secrets to traveling to London on the cheap. In today’s post, I am sharing my best travel tips to stick to a shoestring London travel budget: 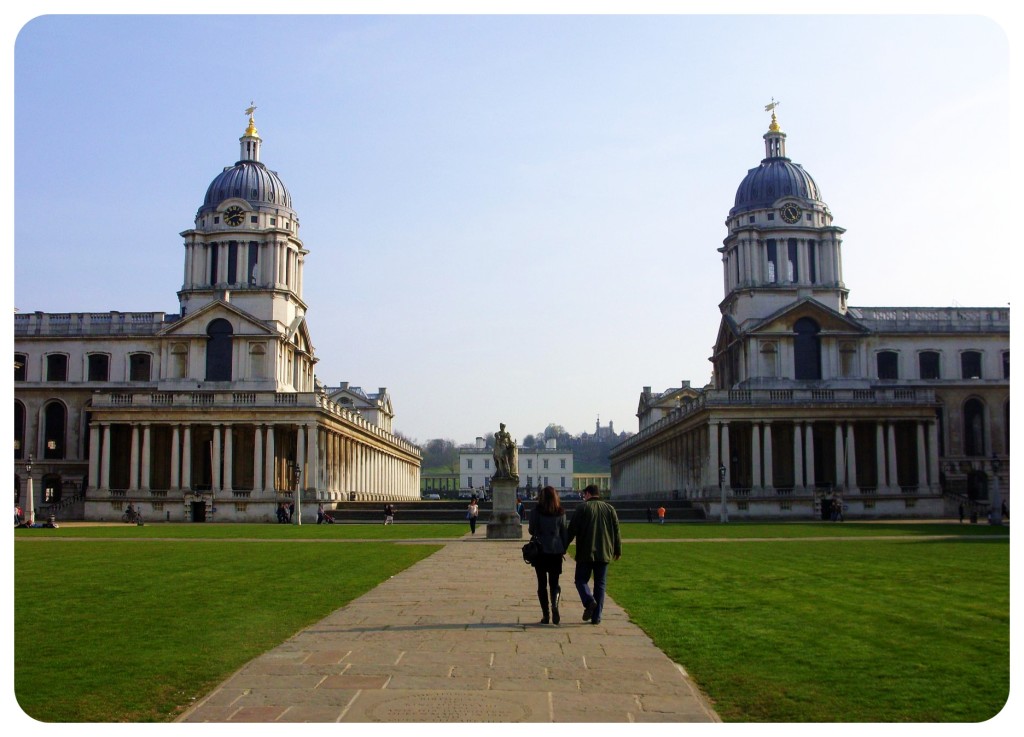 Know how to use public transportation in London

Public transportation will probably be your biggest expensive while you’re in London, but there are some ways to save money on buses and subways. First of all, pick up an Oyster Card instead of paying for single rides each time – trust me, you’ll need one. There is a £5 deposit for the card itself, but you’ll get it back when you leave and return the card.

1. Get an Oyster Card in London

You have two choices when you buy an Oyster Card: you can buy a daily or weekly travel card, or you can simply add money to the card. That way, the ‘pay as you go’ version, is cheaper if you don’t plan to take a lot of trips during the day (but if you are staying not right in Central London, it’s very likely that you’ll be using public transportation every day). With the Pay As You Go version you’ll pay only £2.40 per ride instead of the full £4.90 fare for a single ticket.

If you opt for the Pay As You Go option, your daily fare will be capped at £7.20 (in Zone 1 & 2, Central London), which is the price of a day ticket. A day is counted until 3am the next morning, by the way. If you’re wondering how much money to put on your card: £20 will usually cover a return journey from Heathrow plus travel around Central London for one 1 or 2 days. If you are planning to stay for 3 to 4 days, put £30 on the card. If your card runs out, you can always put more on it. If you’re spending an entire week in London, your cheapest option is the 7-day travel card (£32.10 vs. £44.80 for 7 daily travel cards). 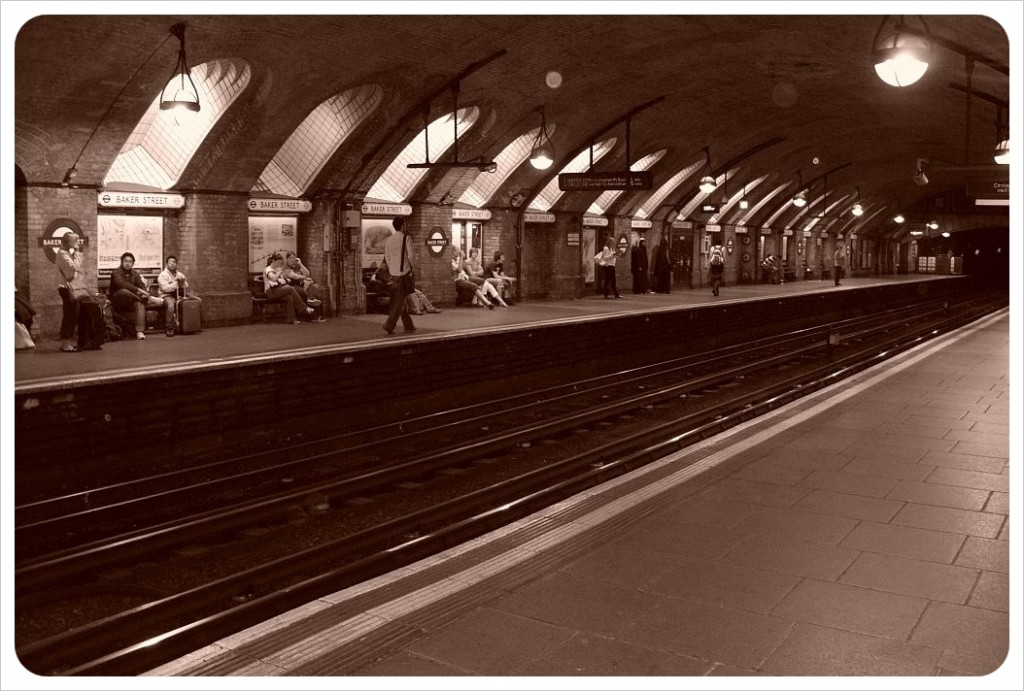 2. Off-peak vs. on-peak fares in London

If you don’t want to get an Oyster card, it is still possible to buy (paper) travel cards – they are considerably more expensive though, with £12 for a day pass (compared to the £6.40 cap off with an Oyster Card). If you’re a late riser, opt for a off-peak travel card, which is cheaper than a normal travel card but only allows you to travel after 9.30am, however there isn’t a difference in all travel cards – for example you pay the same price for an off-peak card in Zone 1, but if you stay further outside and need a travel card that reaches until Zone 5, it does make a £5 difference. You can find all the current London transportation fares in this table.

You can even save more money when you take the bus instead of the tube – and buses in London aren’t the grimy kind you’ve got in some U.S. city, but new, clean double-decker buses which connect the places that aren’t covered by the subway and train network, but some go on routes parallel to a subway route, and this is when taking the bus is cheaper. A bus ride with an Oyster card is £1.50, no matter if it’s peak time or not. Also: if you use only buses and use a Pay As You Go Oyster Card, your fare will be capped at £4.50, which means every day when you reach £4.50, you’ll ride the rest of the day for free. 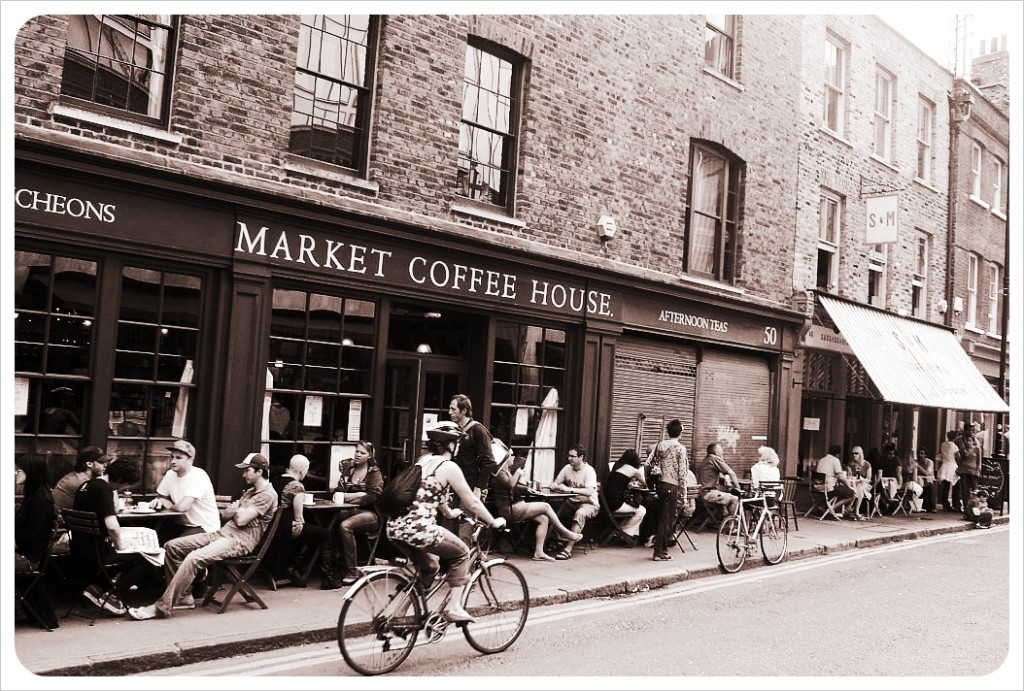 Sightseeing by local bus in London

Also – taking the bus is a much better way to see the city, so if you’re not pressed for time, I recommend taking the bus whenever possible. While hop-on hop-off tours are a great way to see London, they can cost an arm and a leg! Instead, there are several London bus routes which pass right by the most iconic sights, which are all included in the price of your day ticket or Oyster card (though there are no headsets, so you might need to do a little background research yourself.

One of the buses that goes by many of London’s sights is bus number 9 and you can hop right on in Piccadilly Circus. The bus passes Trafalgar Square, Somerset House, Harrods, the Albert Memorial and Royal Albert Hall in West London, and finishes at St Paul’s Cathedral in East London.

Another fabulous route for sightseeing is bus RV1 which runs between Covent Garden and Tower Gateway. You can get on it on either end and the route follows the Thames passing the South Bank with the London Eye, London Bridge and even goes right over the Tower Bridge. 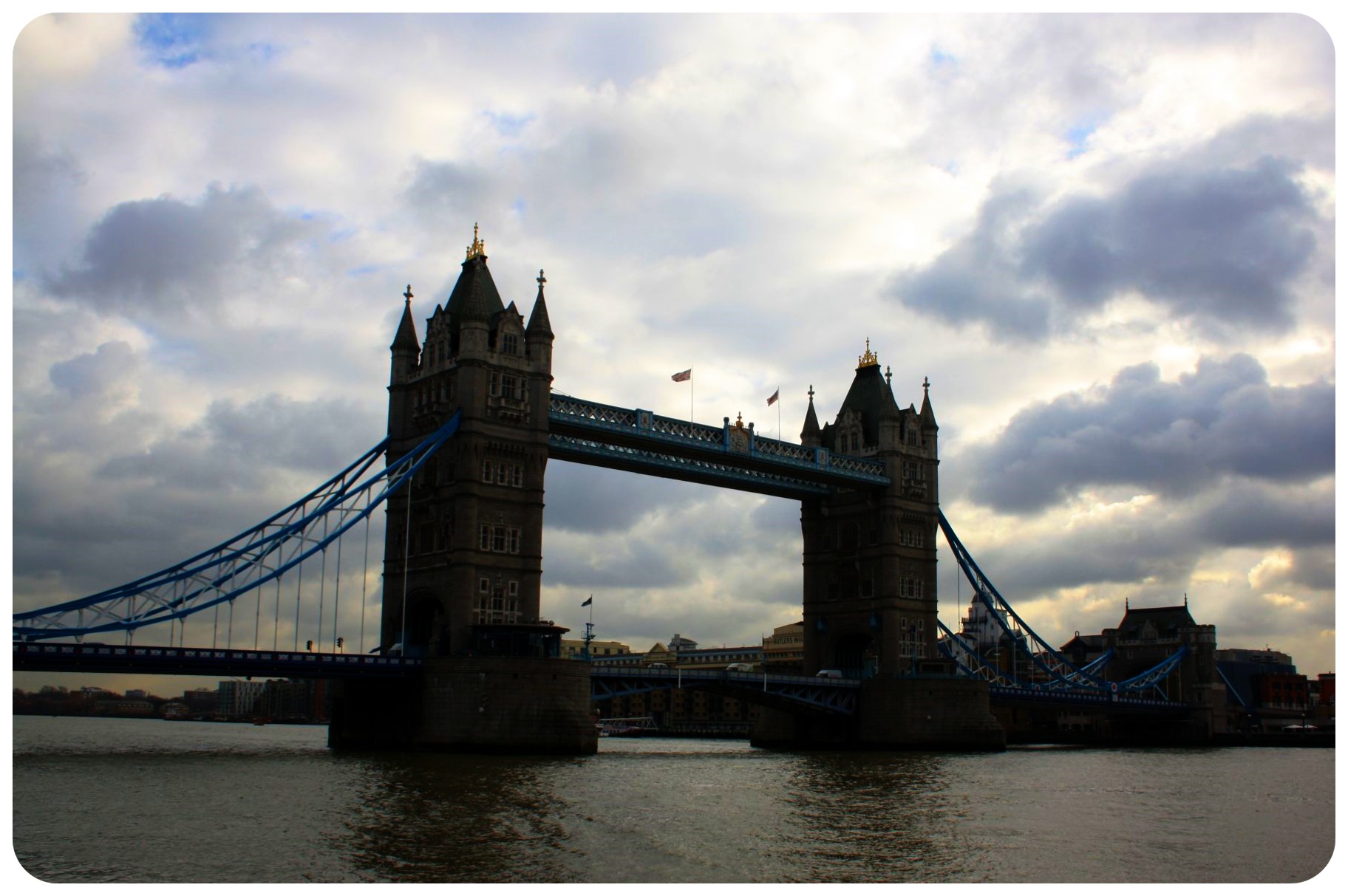 Most of London’s attractions are free!

One of my favorite things about London is that most of the city’s attractions are free – including its famous museums, such as the British Museum, the National History Museum or the Tate Modern. (A great way to spend a rainy day by the way, and there’ll be one of those most likely!).

In addition to the free museums and galleries, you can see many other things that are iconic London landmarks without paying a penny, such as: 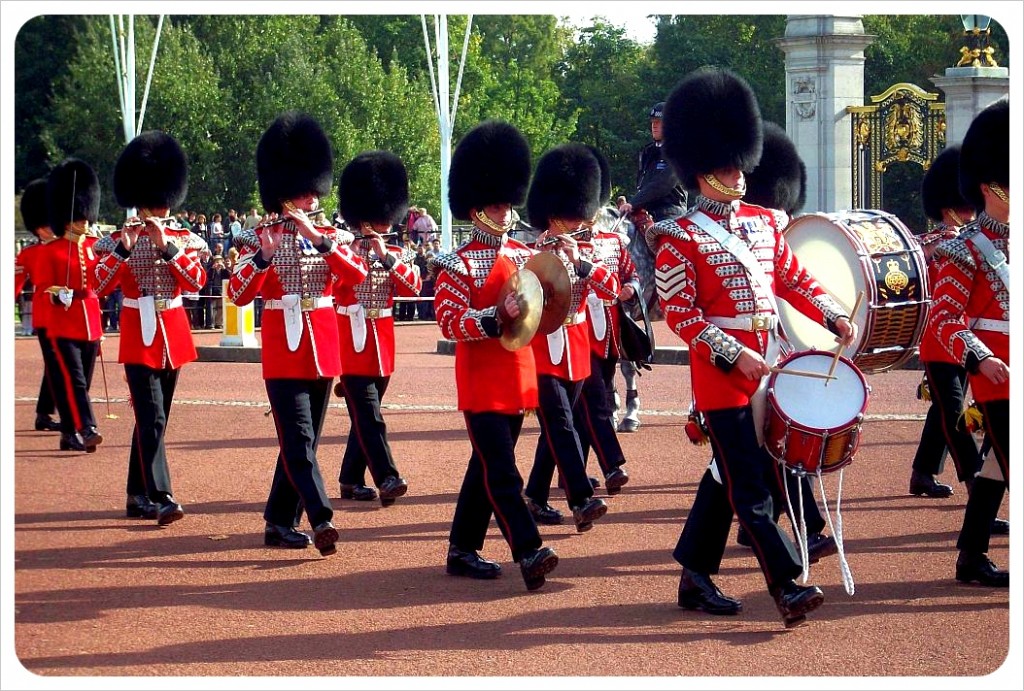 So while a trip to London can be pricey, if you feel like you have to do things like Madame Tussaud’s, go inside Buckingham Palace, the London Eye or the Shard for views (which you can get much cheaper when climbing the Monument in the City of London, by the way, which is only £3, or entirely free if you head up to Primrose Hill or Hampstead Heath).

I love free walking tours – they usually give you a great overview of the city, allow you to get your bearings, and at the same time you’ll get some background info and insider tips. Tour guides love to share their knowledge of the city, so don’t be shy if you’re looking for recommendations for a certain kind of cuisine or just a good pub with cheap beer. When you join a free walking tour, you’ll also notice how close most of the city’s attractions are and that most of Central London is surprisingly walkable. I recommend Sandeman’s New Europe Royal London Tour, a 2.5 hour walk that covers Buckingham Palace, No 10 Downing Street, Trafalgar Square and Nelson’s Column, St James Park and the Horseguards, to name just a few stops. 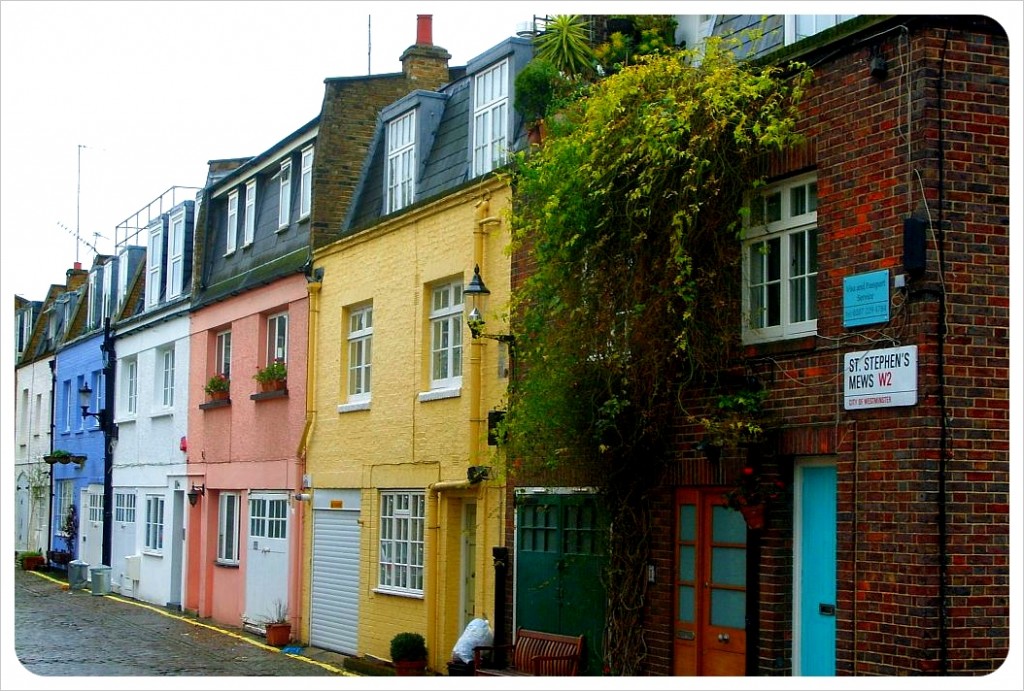 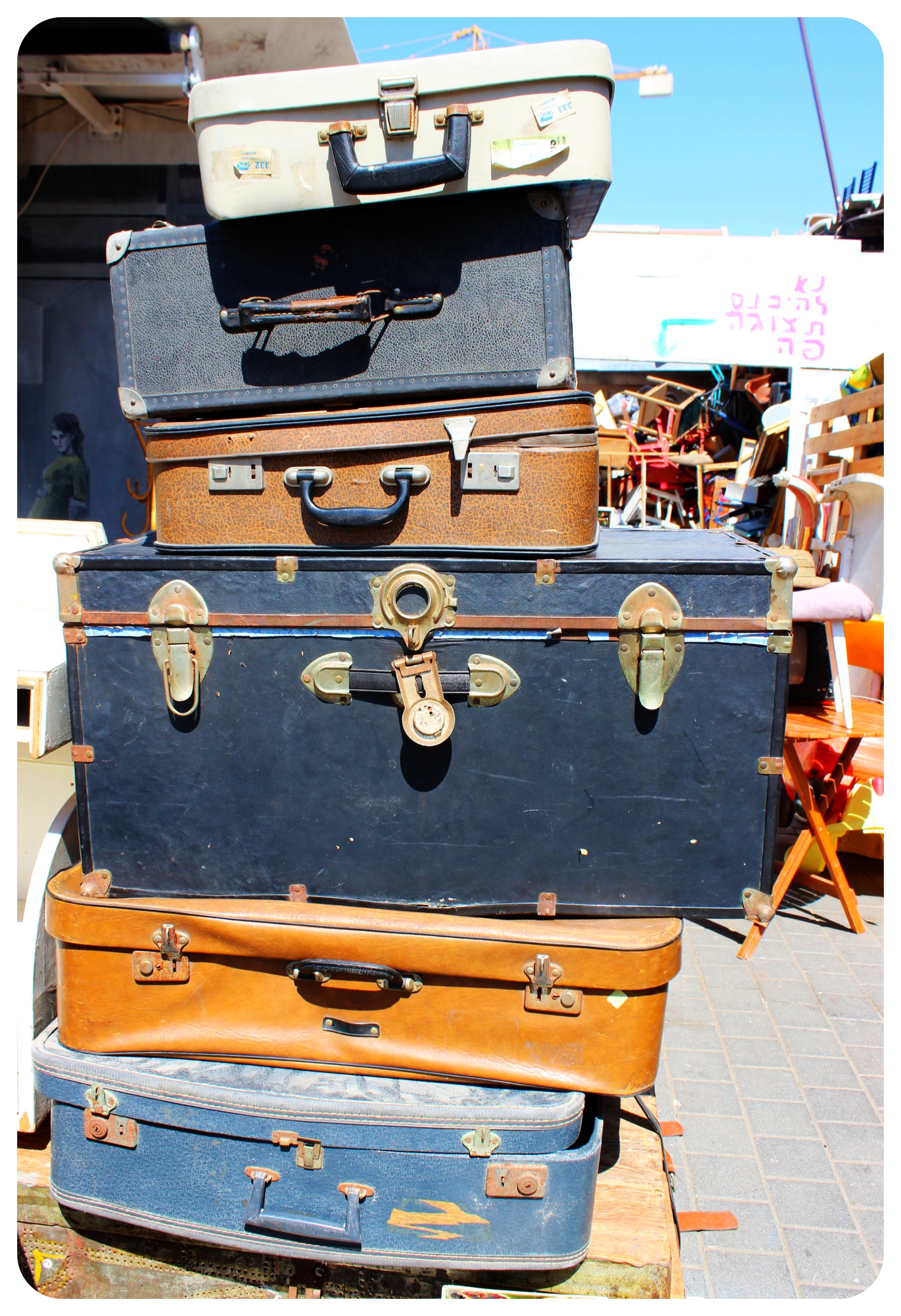 Use discount vouchers in London

Before buying anything, check if there are any discount vouchers for the activity, food or drink you’re planning to buy. For example, browse through Groupon for the latest voucher codes before you set off on your trip.

Discount vouchers are hugely popular in the UK and many restaurants offer meal deals or 2-for-1 dinner vouchers. There are also vouchers for supermarkets if you’re planning to cook for yourself, and it pays off to compare prices in the main supermarket chains (Tesco’s, Sainsbury’s and Waitrose) to see which one has the items you’re planning to buy on offer. 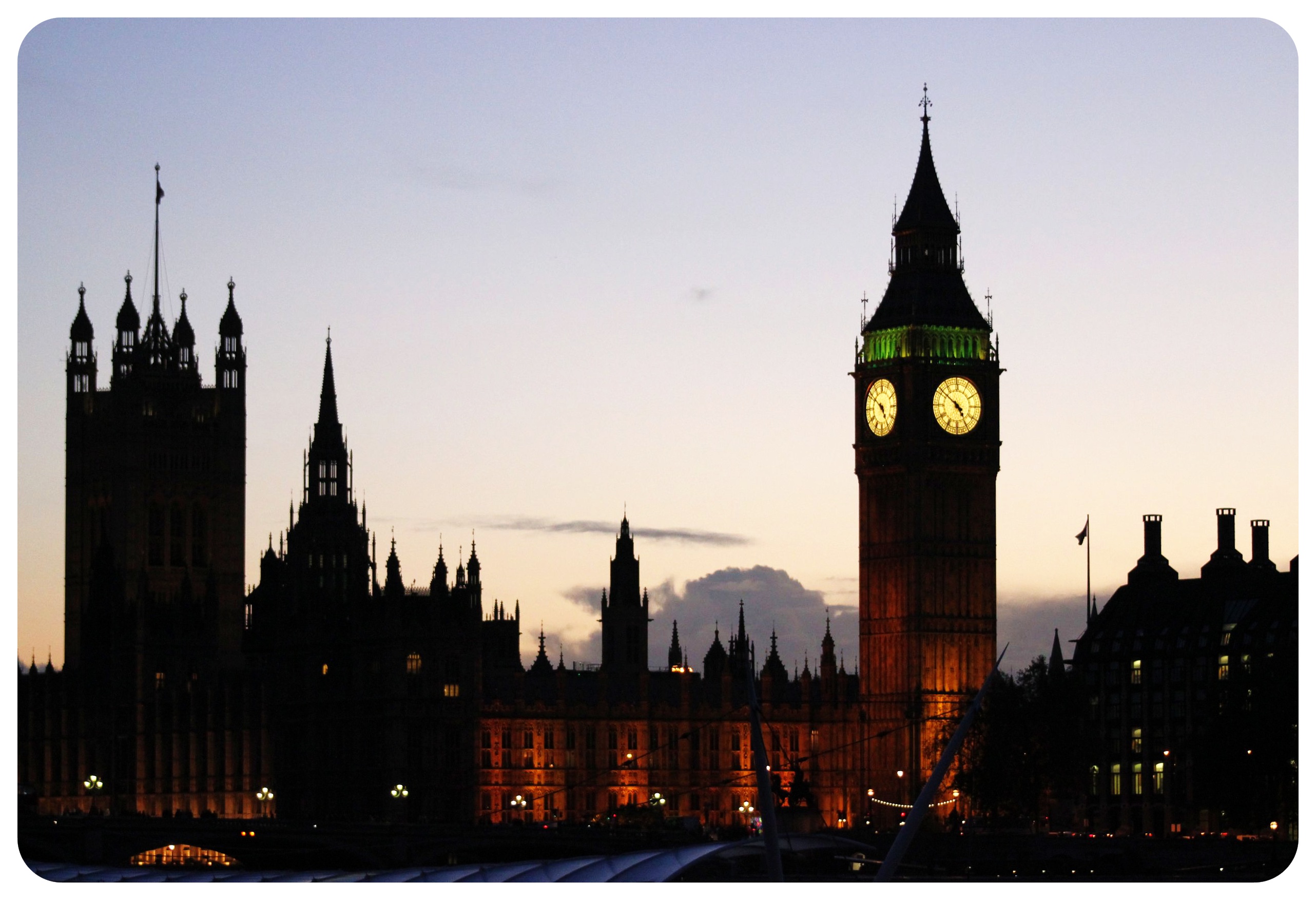 How to save money on paid attractions in London

If you’re planning to see some of London’s attraction that aren’t free, consider getting a London Pass which includes over 60 London attractions, including a Thames River Cruise, the Tower Of London and Westminster Abbey. Tip: If you buy the pass through VisitLondon, the official tourist board, you’ll get a 10% discount on it.

If you only plan to visit one or two of the paid-for attractions, check online if they offer an advance booking discount. Most of the attractions offer it – the London Eye for example is 20% cheaper if booked in advanced.

If you’re planning a trip out of town on the train – to Bath or Brighton for example, you should also check out the National Rail website where you’ll usually find 2-for-1 offers for all major attractions (if you buy a train ticket). Train tickets should be purchased in advance, too, by the way: a ticket to Brighton is £22.90 if you buy it on the spot, but it can be as cheap as £11 if you buy it a few weeks in advance. This kind of travel requires planning, but it makes a huge difference on your wallet. 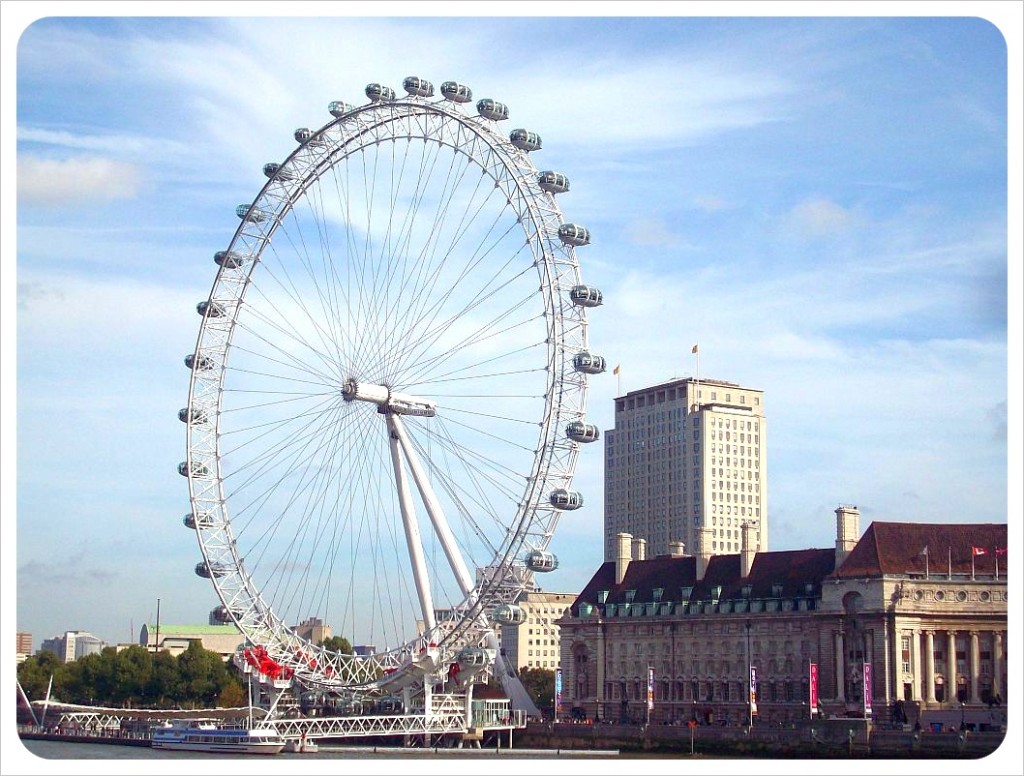 Theater is a fix part of many London visitors’ itinerary, and seeing a play in the West End is well worth the splurge. The best part is that seeing a play or musical doesn’t need to be expensive – I’ve seen plays for as little as £20! Similar to New York, London also has discount ticket booths – head to the TKTS ticket booth in the afternoon to get discounted tickets for the same evening. The Guardian just published a guide on how to get the best deal for West End Theater Tickets. 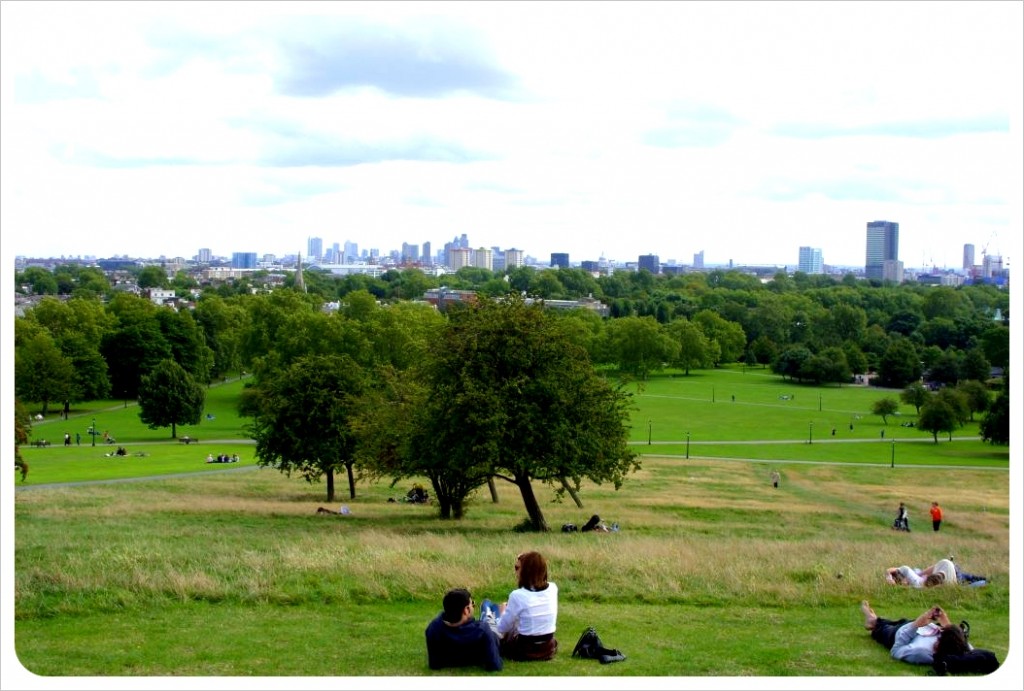 Eat and drink on the cheap in London

First of all: don’t ever spend water on bottled water when you are in London. The tap water in the city is perfectly fine and safe to drink, and not only will it save you some precious Pounds, but you’ll also do the environment a favor.

For a cheap lunch, head to Tesco, Sainsbury’s or Boots and pick up one of their lunch deals, which are as little as £3 and include a sandwich, a drink and an additional item (chips, fruit or something sweet). It doesn’t get any cheaper than this! If you prefer a hot lunch, head to EAT or Pret A Manger for a hot sandwich or a soup. You can get either one for less than £5. All of these places have several healthy food options.

When the weather is nice, it is always a great idea to buy picnic food and eat in one of the beautiful parks – nothing beats an al fresco lunch in Regents Park or St James Park. I highly recommend Portobello Road Market and Borough Market to pick up a quick yet scrumptious meal.

If you’re staying in a hostel with a kitchen, you can buy one of the cheap dinner deals that is offered by all of the supermarket chains for as little as £10 – this includes a starter for two, two main courses and even a bottle of wine! (Tip: If you splurge on the £20 dinner deal at Marks & Spencer, you get the best value for money with a starter, main, a side dish, dessert and wine). 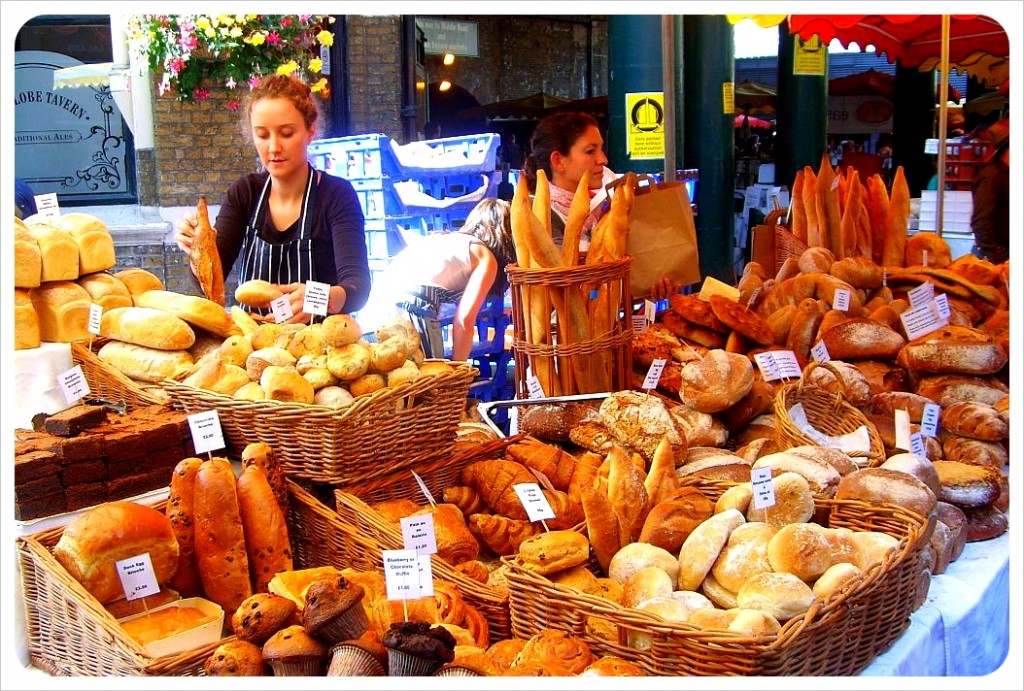 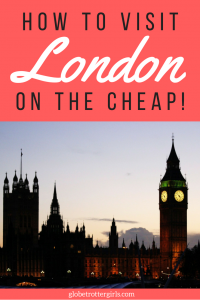 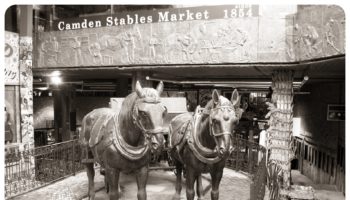