The sound of the closing door echoed down the long, dark hallway of our hotel…

The Navarat is an old-school 1970s-style monolith of a hotel in Kamphaeng Phet, a small city in central Thailand. Our door seemed to be the only one that opened and closed with any regularity at all, though we had spotted a few Thai businessmen mulling around the lobby earlier. With only one other half-empty hotel in town (the once-grand Chakungrao Riverview Hotel) and not an English restaurant menu in sight,  it is clear just how few tourists visit Kamphaeng Phet.

And yet, Kamphaeng Phet is home to magnificent ancient ruins. 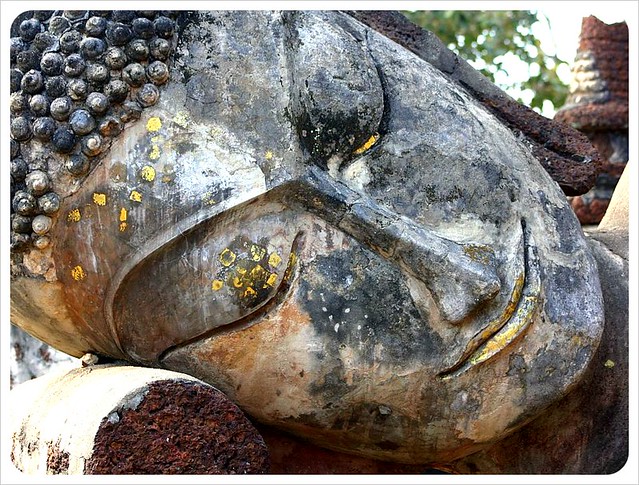 In fact, the Kamphaeng Phet Historical Park is one of the ‘associated historic towns’ in the very wordy ‘UNESCO World Heritage Site Historic Town of Sukhothai and Associated Historic Towns’. The equally magnificent site at Old Sukhothai, about two hours to the east, is smack dab in the middle of the well-beaten tourist path. Here in Kamphaeng Phet, however, we had an entire ancient archeological site to ourselves. 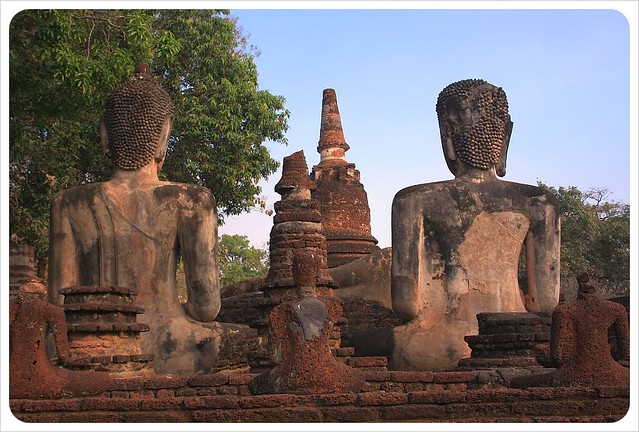 So why is there no tourist trickle to Kamphaeng Phet? We are honestly not sure. One reason might be is that while Sukhothai has buses running to and from Chiang Mai in the north and Bangkok in the south, the only way to get to Kamphaeng Phet is by a shared Songthaew (covered pick-up truck) ride. It took us a bit of poking around in Sukhothai to even figure out how to find those, which we found to be an entertaining 2.5 hour ride watching locals hop on and off with groceries, bamboo baskets or brand new pop CDs, gossiping cross-legged on the benches along the way. 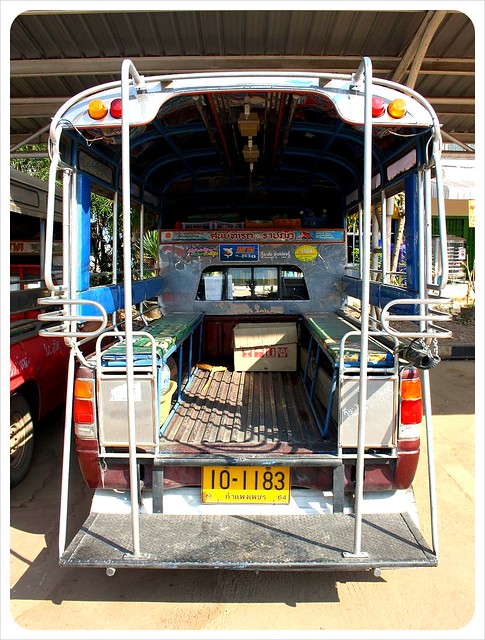 We were the only ones to take the whole Sukhothai-Kamphaeng Phet ride, and the driver dropped us off in front of one lone tuk-tuk when we pulled into town. At first, we assumed it was her brother or friend she wanted to hook up with a deal, but in the end, we realized the favor she did for us, as getting around town is as hard as getting in.

Taxis and tuk-tuks in town are nearly non-existent. Our hotel receptionist would have known that, but made no real effort to assist us. She, like the rest of the staff, spoke no foreign language at all. Communicating was done by a lot of pointing and giggling.

Instead, we flagged down a passing songthaew and said the name of the park. Somehow, we ended up at the main bus station outside of town. 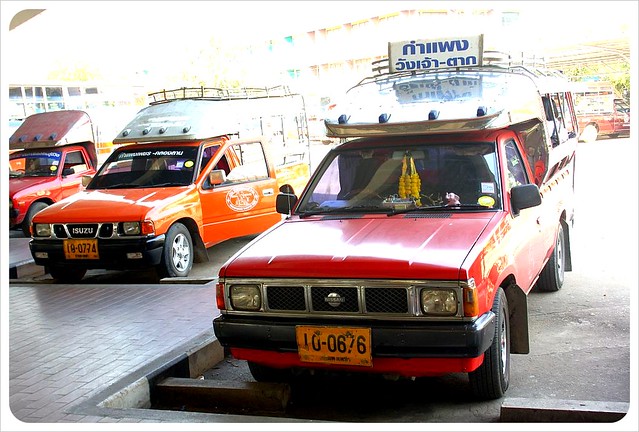 Amid the ensuing confusion, we tried to make our needs clear to several drivers, none of whom understood. One brought us to a booth, conveniently labeled “tourist information”, where a lady gave us a map and pointed to gate 5. After 30 minutes of fascinating people watching (bus stations are perfect for this), our feet were getting itchy – where is this songthaew she had promised? After asking a second time, she said thirty more minutes. 30 more minutes? There were songthaews pulling in left and right, surely one would take us to the ruins?

Yes, our Thai is limited. Yes, we had been spoiled down on the Thai islands, and in Bangkok, and Chiang Mai where so many Thais are practically bilingual. But language wasn’t even what was holding us back. The strange thing was that the ruins were plastered all around the bus station, on advertisements for a cell phone company, on the maps of the city, on the brochure she had given us. We could easily point to where we wanted to go, and yet it seemed like such an out of the ordinary proposition to get there.

Eventually we did get there, and spent the afternoon cycling around incredible chedis and statues of Buddhas and elephants, in utter peace and quiet. 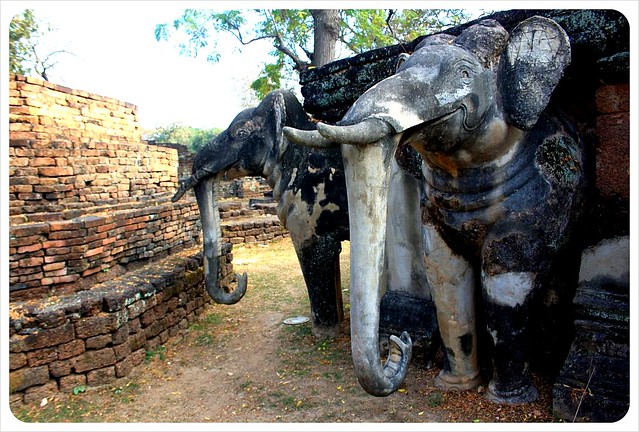 The thing is, Kamphaeng Phet is no rural village. It is a modest- sized city set overlooking the Ping River. Infrastructure here is strong, with engaged locals who are educated and active. There are dozens of schools, Buddhist temples and plenty of cute restaurants and quality cafes, useful shops ranging from lazy barbers to laptop shops. And our favorite part is that the whole town is practically one big outdoor gym. Along the river along we counted five outdoor gyms in the parks throughout the city center. Life is great in Kamphaeng Phet. 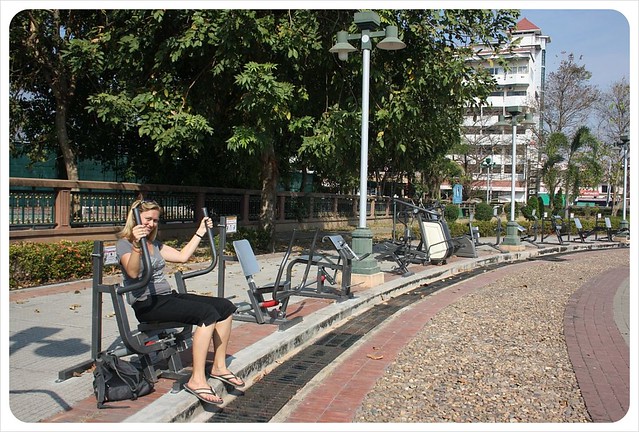 The city is as typically Thai as to be found in Thailand, without all of the plastic tourist trinkets to confirm it.

You won’t find a fridge magnet or T-shirts that say I heart KP, and you won’t be getting a postcard from us from Kamphaeng Phet Historical Park as we did not find a single one in town. During online research, all of the web resources we trust came up short as well. Wikitravel has no details about the city, Lonely Planet mentioned a bit about transport links only and the same pair of hotels came up across all the booking sites as well. Forget any foreigner-friendly foodie spots either. Restaurants here, and there are tons of them, set out to please their local clientele only.

We walked all the way back to the hotel that night along the river, as the sun set that evening and caught such a refreshing glimpse of life in Kamphaeng Phet: joggers along the river, families in the playground, large groups sweating it all out at outdoor aerobics classes (which looked like the international Zumba phenomenon) or pumping iron at the outdoor gyms, kids in school uniforms with parents in suits and dresses on motorbikes arriving at the market for dinner. 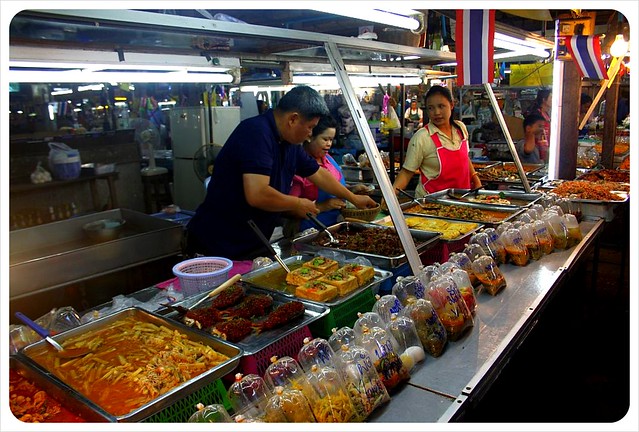 Perfectly friendly to us, the kids waved enthusiastically as they rode by on bikes, and the market stall vendors smiled as we took pictures of the frogs on sale in the market. But no one there was making a living off of tourists, no one catered to our needs at all. 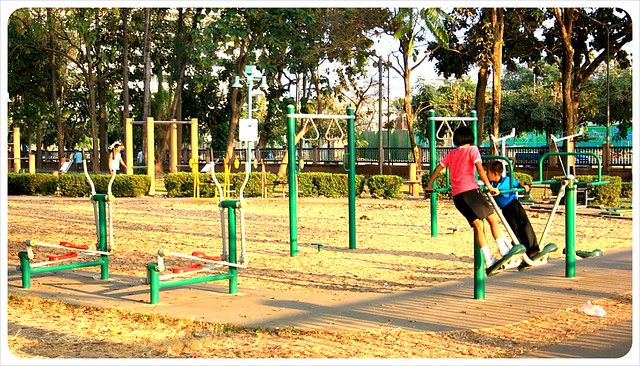 In fact, no one really could have cared less that we were there, and we loved Kamphaeng Phet more for it.

This post was made possible in part by Aqua Resorts, the premier boutique Hawaii hotel chain that provides a wide range of Waikiki hotels and Hawaii resorts for all types of budgets.
.
Tags : thailand
previous article

A white lie and a wild ride in the Windy City