Portugal’s capital city took us completely by surprise when, after booking a three-week stay on a whim, we ended up enamored by Lisbon’s allure. Unlike other European capitals, Lisbon balances its role as a cosmopolitan capital and once-commanding role in global maritime history with endless stretches of sandy beach and cool ocean breeze for relaxing days at the seaside. 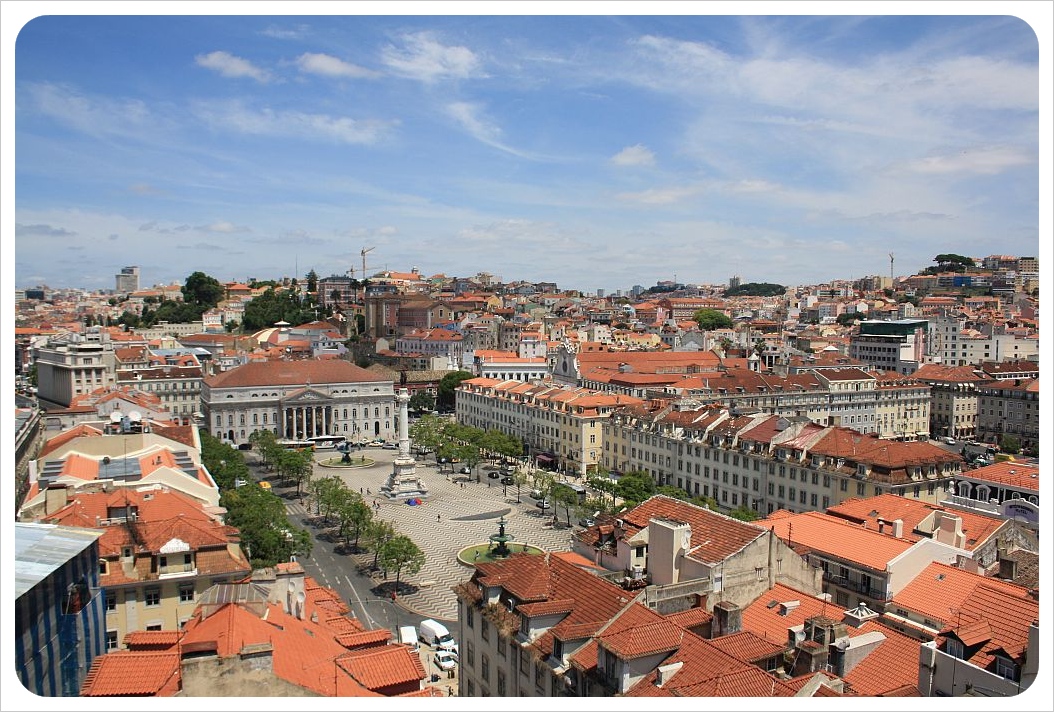 The only way to experience all of these charming facets of the city is by imbibing it from as many perspectives as possible. Climb the city’s seven steep hills for sweeping views of the city and beyond to see where the mighty Tagus river estuary to the south empties into the Atlantic Ocean to the west. Or, just get out and ride – whether that be in a car, on a bike or a more adventurous form of three-wheeled transport. 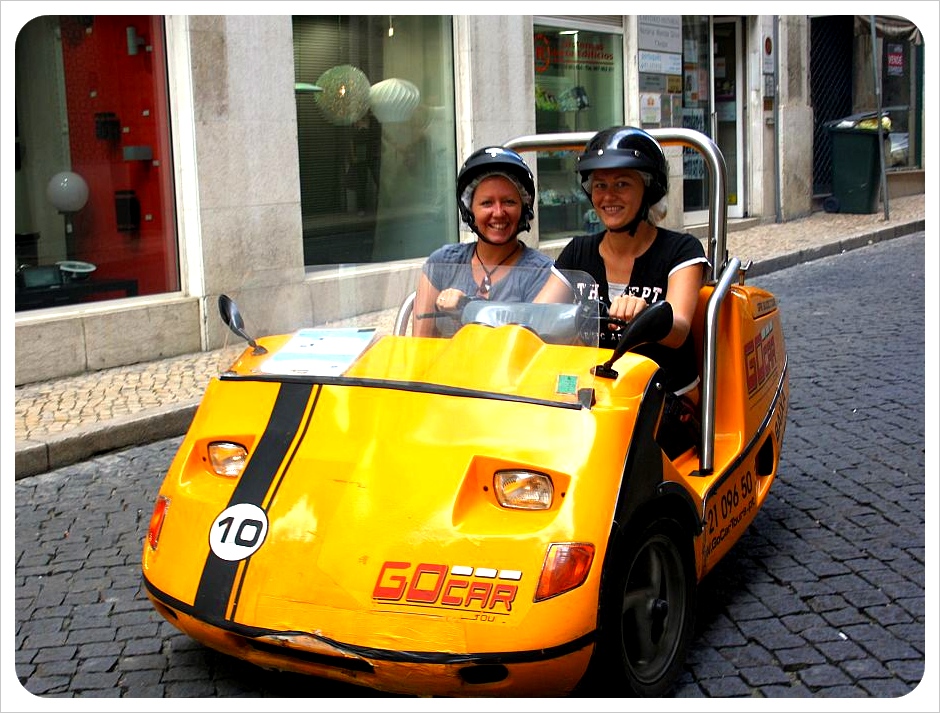 Cruising around downtown can help visitors to get their bearings, but we’ll save city center exploration for a set of fewer wheels below. We rented a car to explore the surrounding areas outside of Lisbon, starting in Sintra, an enchanting little city and UNESCO World Heritage Site 25km outside Lisbon. 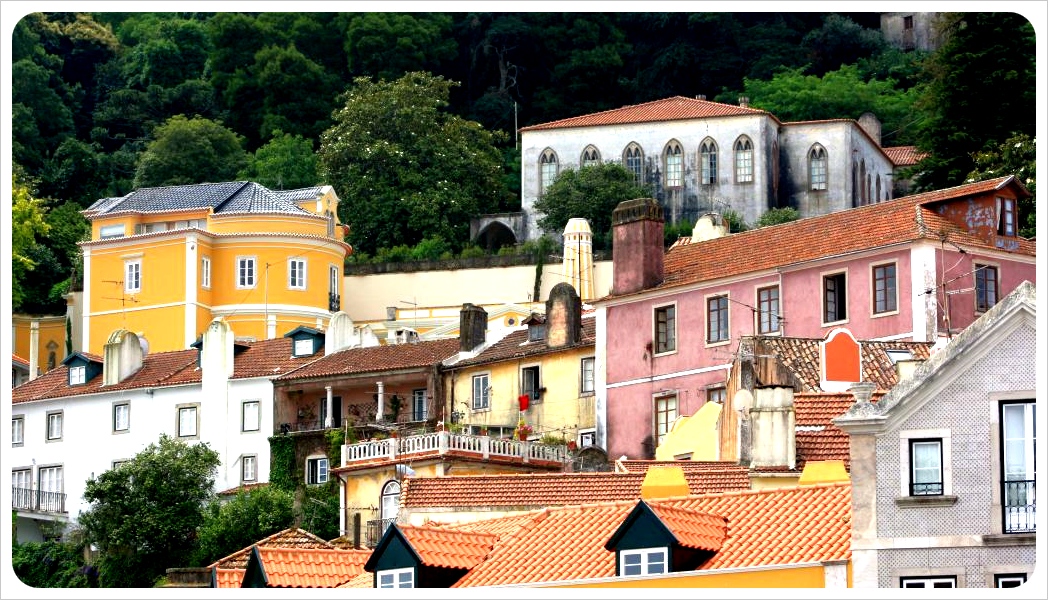 Luckily we pulled into town just before 10am, early enough to find parking and have the town’s 9th century Moorish castle almost entirely to ourselves. Day-trippers flock to Sintra and its fabulously ornate 19th century Pena Palace, so beat the crowds here and then leave Sintra and loop over to Praia Grande, ‘big beach’, a popular surfing beach and Praia Adraga, a much smaller version of the big beach on your way to Cabo da Roca, the westernmost point in Europe. During our visit, it was chilly and wet, so when we discovered the six kilometer hike from Adraga Beach to the Cabo da Roca, we had to turn it down and drive instead. 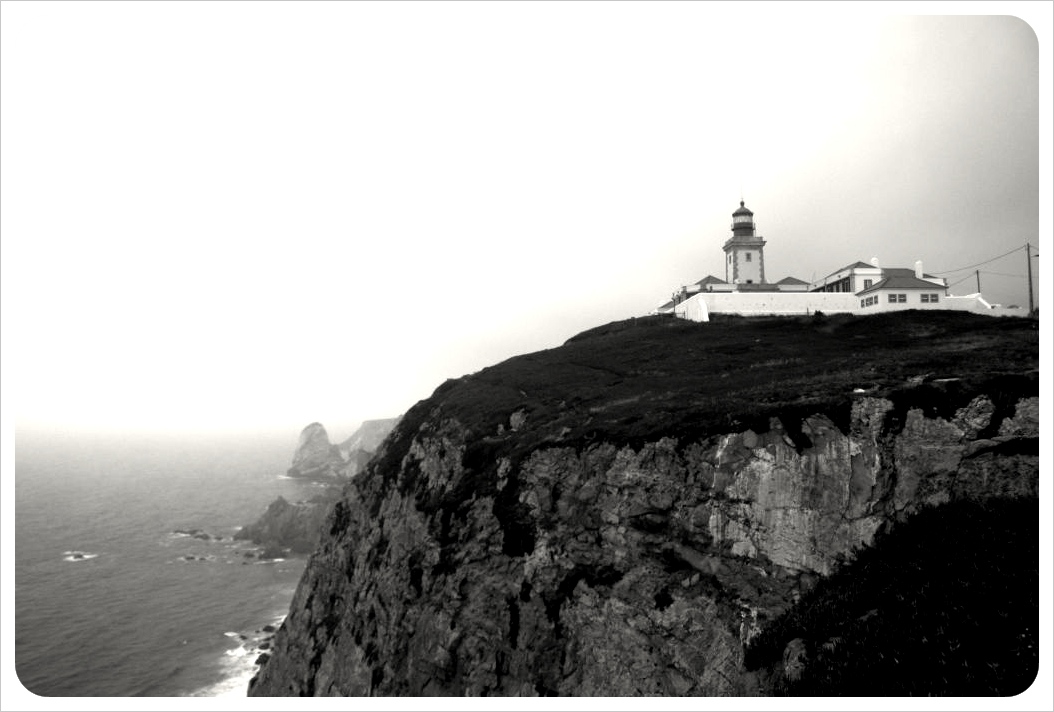 After imagining life for Portuguese sailors using the lighthouse as a guide centuries ago, we left Cabo da Roca, and, as we rounded the curve to the coast of Cascais, the rain stopped and sunny Lisbon life returned as quickly as the clouds had suddenly rolled in. Cascais is a not-so-small beach town that retains heaps of charm, and a spot we decided to actually stay in next time we come to Lisbon. The calm waters of the Atlantic are perfect for swimming, restaurants are varied offering anything from Indian to British to Portuguese fare. People here (and there are many, many people here during the summer) are all about relaxing on the beach, so even though we were far from the deserted beaches in Costa Rica we loved so much, and just a few feet from the nearest beachgoers, we just immersed ourselves in a book and enjoyed the sun. 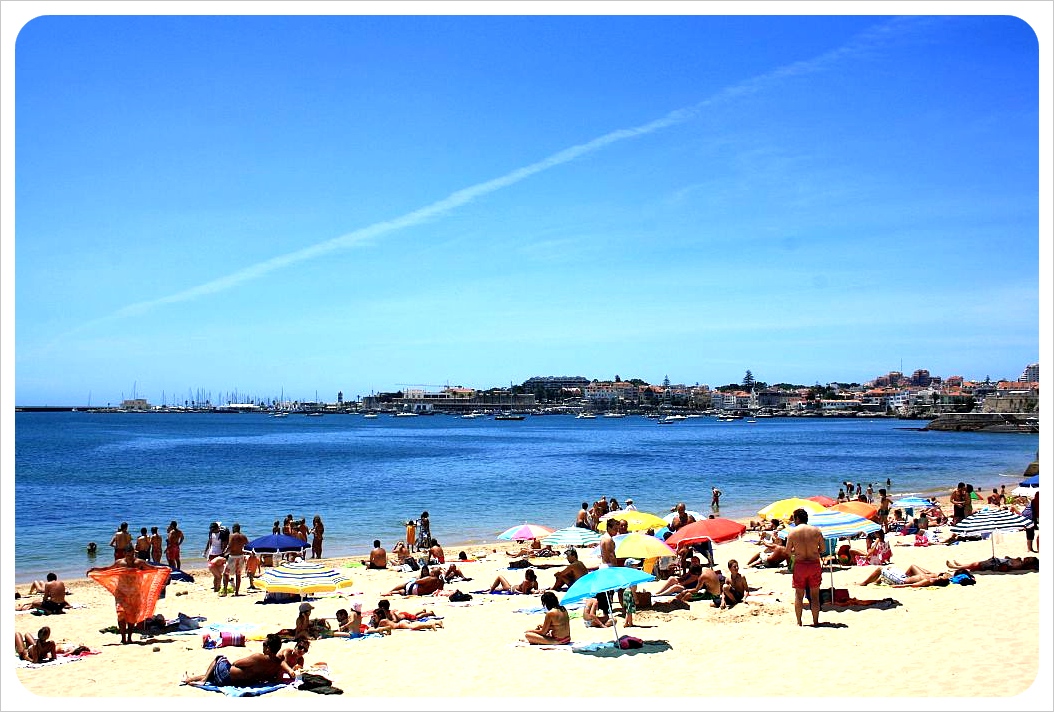 The late afternoon cruise back to Lisbon along the Avenida Marginal de Cascais made us really realize what a fabulous destination Lisbon really is. The 20km drive along this beach promenade is dotted with beach town after beach town, each with its own patch of wide sandy beach, restaurants, bars and hotels. Everything here is geared toward one thing: the beach. fThere are no ridiculous monstrosities obstructing the view, no theme parks, aquariums, or museums that act as tourist traps on this road. The town of Cascais itself has a surprisingly rich cultural calendar, but along the promenade all the way to Lisbon, the beach remains the main attraction. 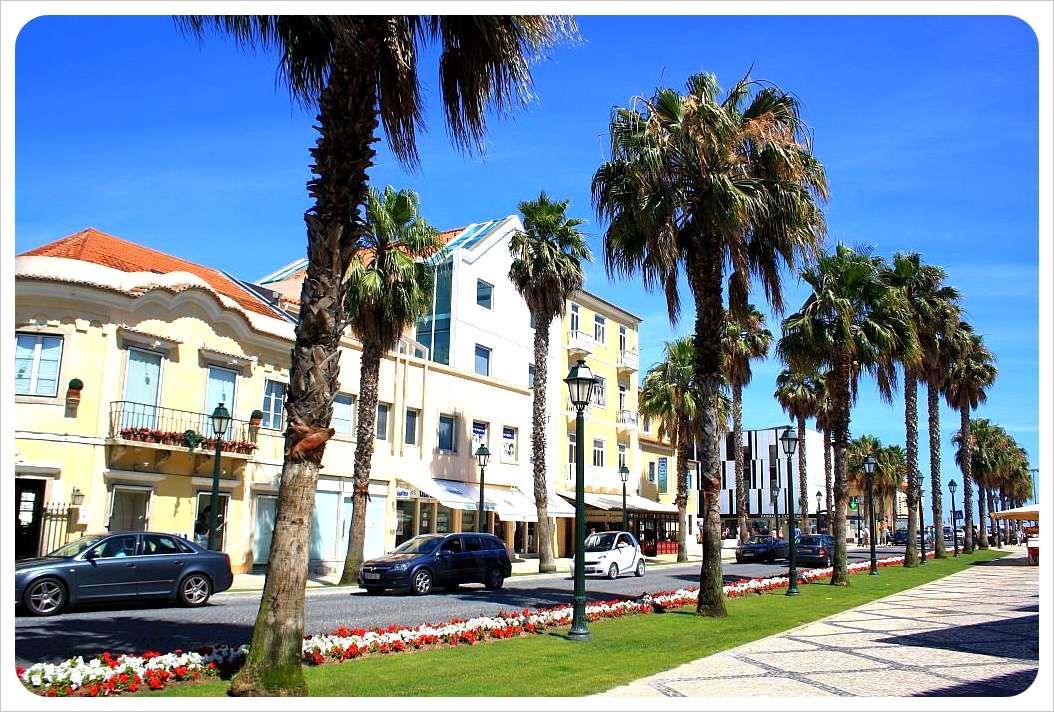 A second day trip option with a rental car in Lisbon is to head south to the Costa de Caparica, over and past two world famous monuments you never knew existed in Lisbon. Cross the Ponte de 25 Abril bridge, which is the spitting image of the more famous Golden Gate Bridge in San Francisco, and at the end you’ll pass directly under the shadow of the Cristo-Rei (Jesus Christ) statue, which bears more than a slight resemblance to the famous Cristo Redentor statue in Rio De Janeiro.  From there, it is just another 15 minutes across the peninsula before there are over 40 miles of non-stop beaches to choose from to spend a relaxing day at the beach. Stop off to eat at any of the beach side cabanas or pack a picnic for the beach. 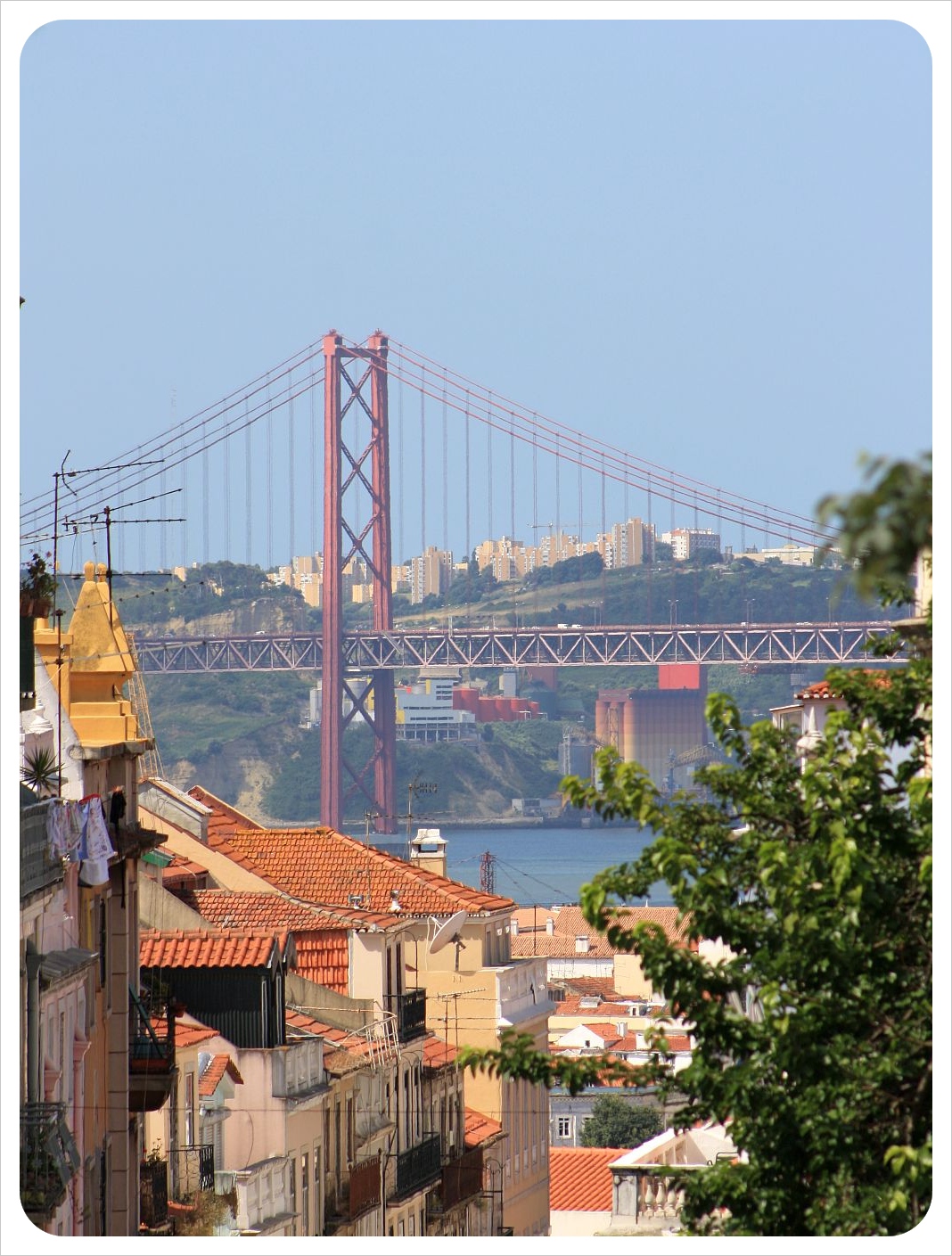 Back in the city, one way to gain unique access to Lisbon’s smaller streets comes on three wheels with GoCar Tours, which we found ourselves doing one sunny Wednesday morning. 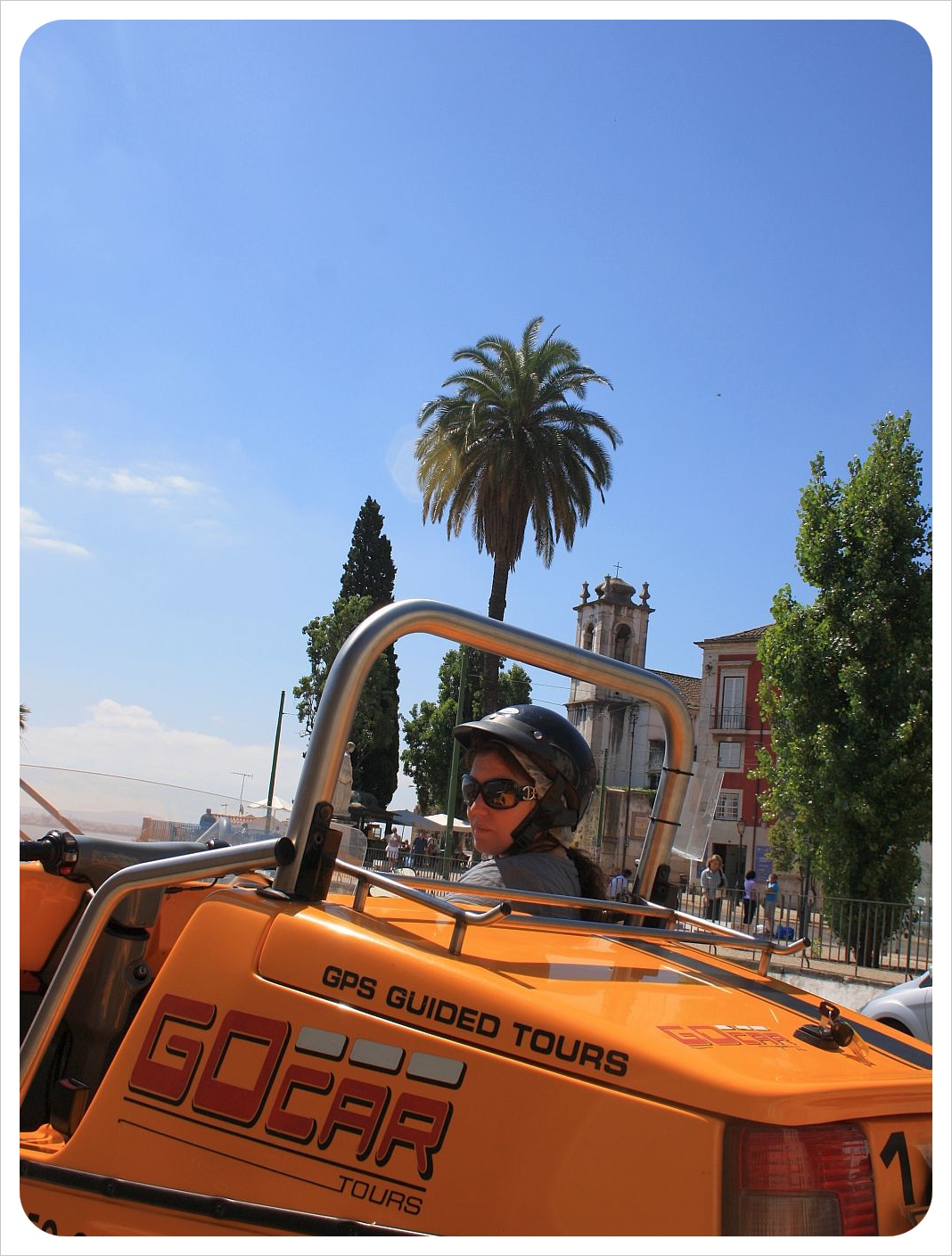 We turned into a narrow side street near the imposing Lisbon City Gate to find yellow go-carts all lined up in a row. The staff inside could not have been more friendly or helpful, giving us tips on what to see in Lisbon as well as in the surrounding areas. After a quick how-to session, we were given helmets and headed off to explore the Lisbon city streets. We set off and  were immediately welcomed by the English-speaking GPS guide, who not only gives driving instructions, but also explains the history of several attractions and locations throughout the tour. 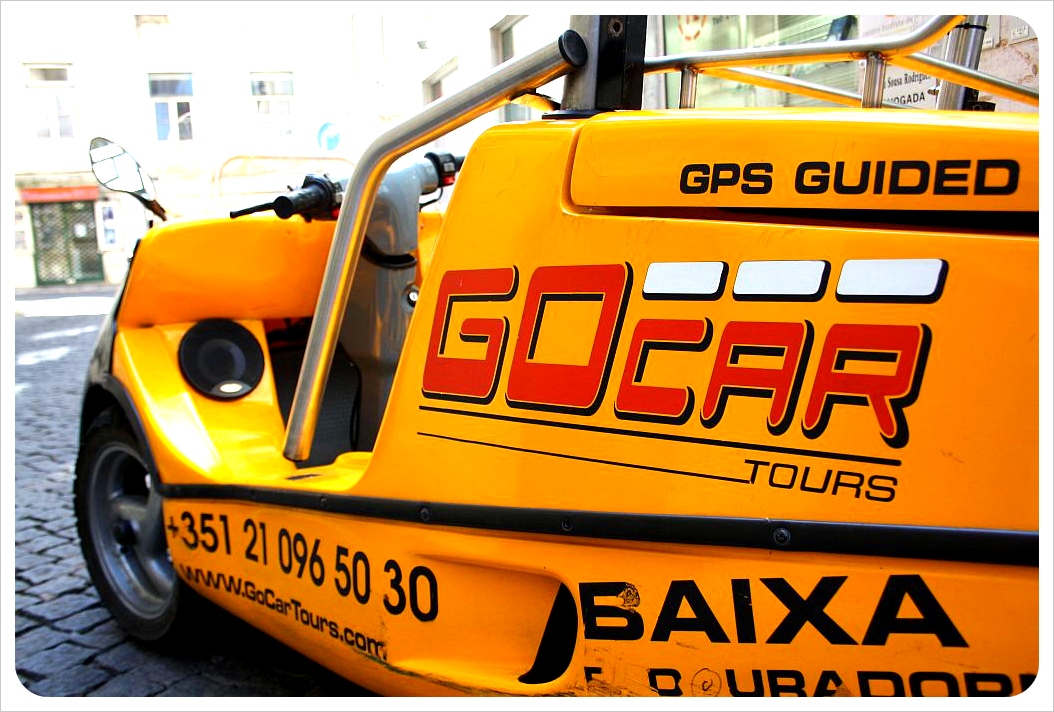 We zipped around town for just under an hour in these speedy yellow three-wheeled machines, but some people rent GoCars in Lisbon for the entire day and even drive it down to Cascais.

One of the things we loved about the GoCars is the access to the side streets unavailable to cars. Lisbon has countless hilly side streets only no wider than two horses, and these narrow streets offer up some of the best glimpses into true Portuguese neighborhoods. 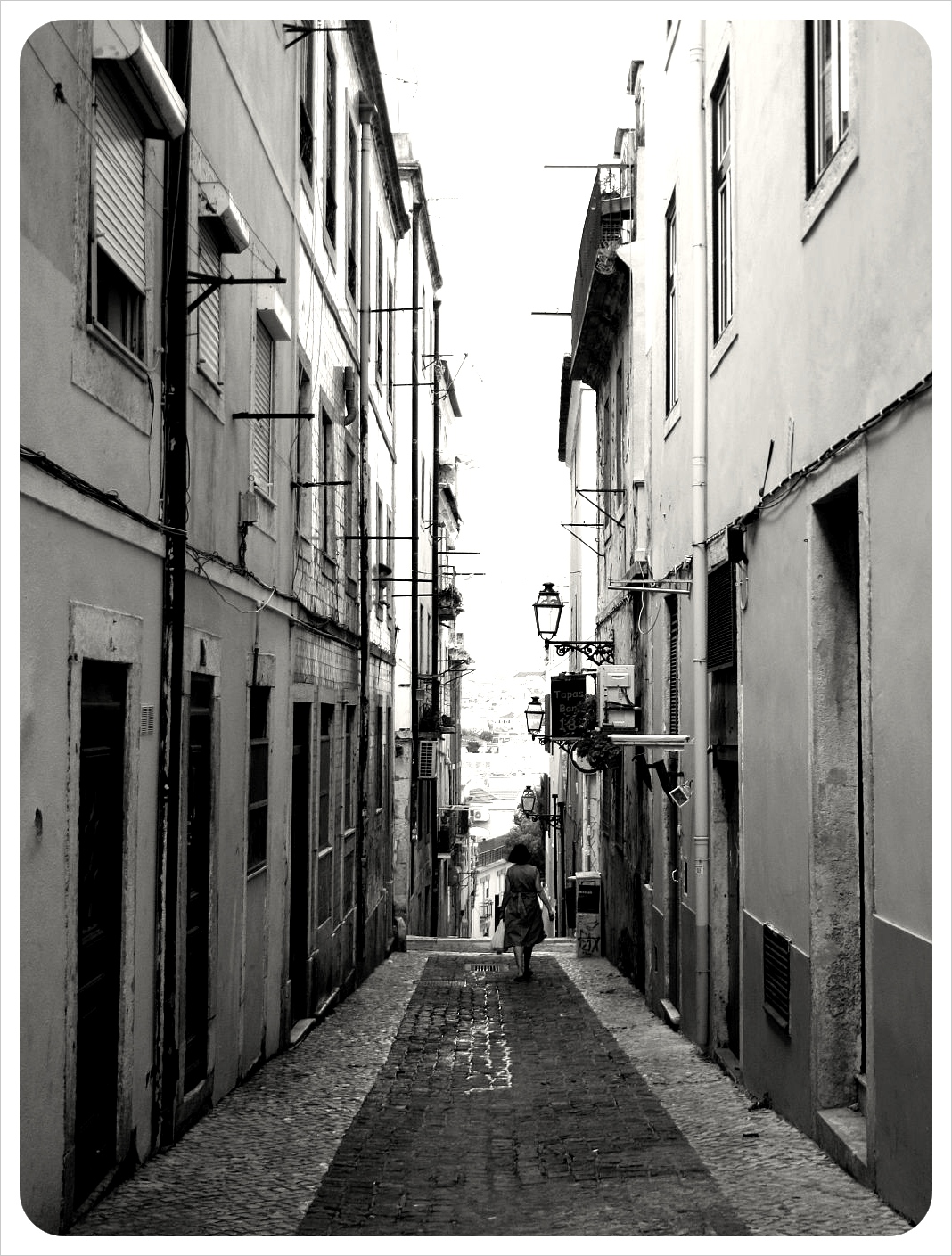 It was great to be able to shoot up and down these hills and hear about the history of these local gems, albeit catching some stares from the bewildered residents peeking down from their windowsills above. As we drove, we always made sure to give fellow GoCars a friendly wave, as well as the dozens of tourists who turned their cameras on us as we tooled by – when you rent a GoCar, you become a tourist attraction yourself! 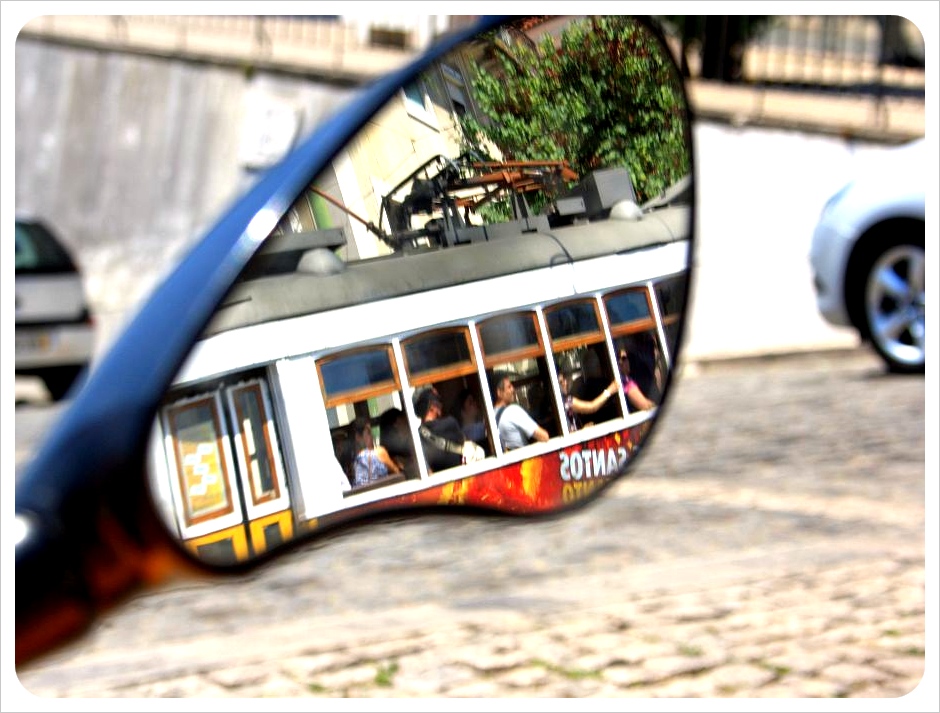 There are a few things to keep in mind if considering a GoCar rental. First of all, you should be looking for a bit of adventure. Weaving in and out of traffic among cars, trucks streetcars, bicycles, buses and pedestrians is an adrenaline rush, especially if you, like us, are not accustomed to go-carting. Also, it is a bumpy ride at times. Lisbon is covered in cobble stones, and you’ll be bumping along very low to the ground for much of any tour through the inner city. If this is a concern, scoot straight over to the Belem area. Not only are many of the famous tourist attractions located here, but this is a flat area right on the shore with paved roads and pathways. If it sounds like fun, but you’re not looking for too much adventure, Lisbon GoCar Tours do make a small set of golf cart-like vehicles available, which are easier to drive and might be more familiar to some users. 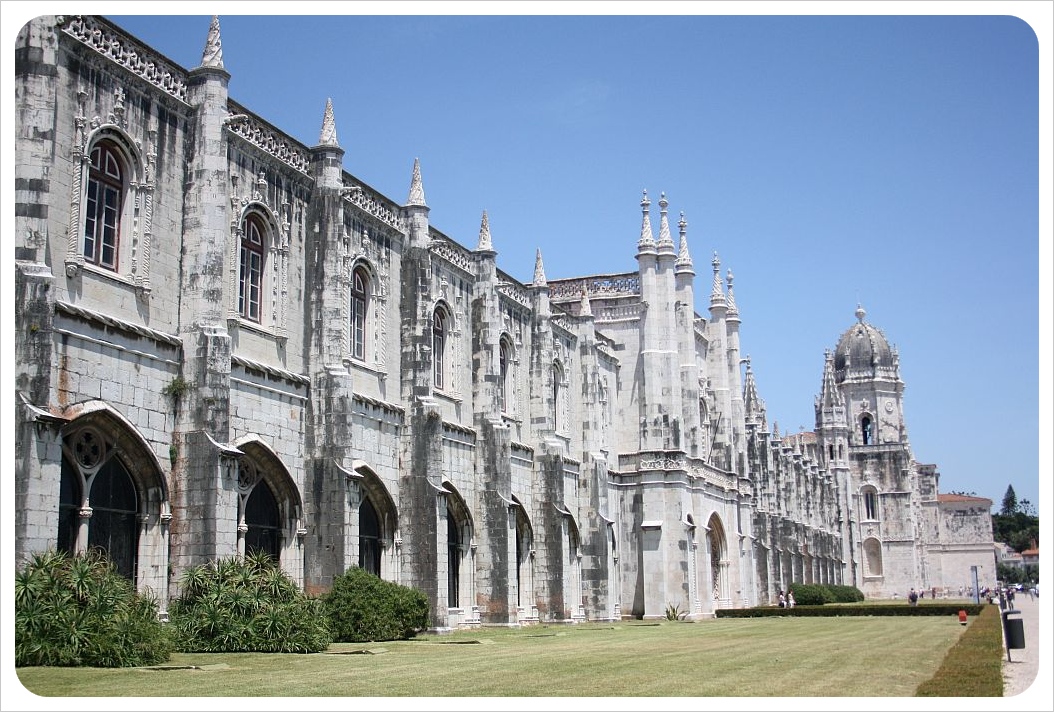 For a liberating day out with sun, sand and shoreline, the best thing to do is rent a bike in Lisbon. We started off from Bike Iberia, right downtown a block from the train station and pedaled the seven kilometers along the bank of the Tagus River. 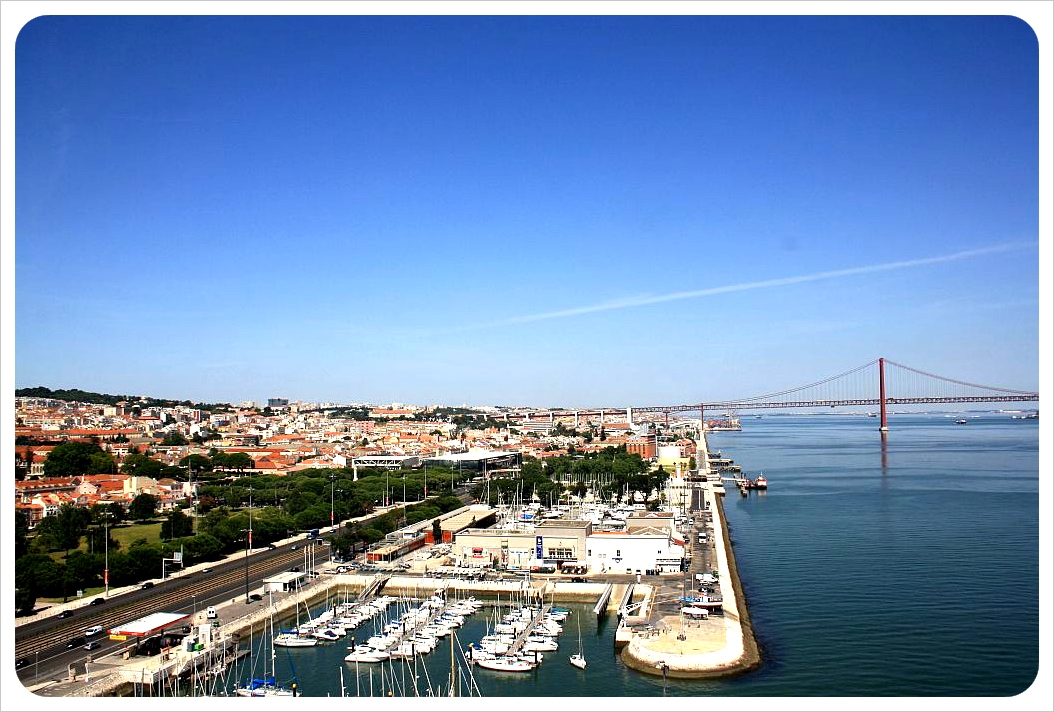 The clearly marked cycle path is popular both with Lisbon’s fit, athletic types out running and cycling and the city’s fisherman, who set up their fishing rods early each morning. Along the way, we passed sexy sunset lounge bars and clusters of slightly upscale waterside restaurants serving up primarily Italian, Portuguese and Spanish cuisine. Once in Belem, we locked up the bikes and headed to sample Pasteis de Nata, Portugal’s most famous pastry, at the renowned Pasteis de Belem, where only three chefs know the recipe for what are considered the best Pasteis de Nata in the world. After filling up on these creamy, sugary delights, we spent the afternoon at the popular tourist sites here like the Belem Tower, Jeronimo Monastery and the Museu Berardo Museum of Modern and Contemporary Art before our ride back to the heart of Lisbon. 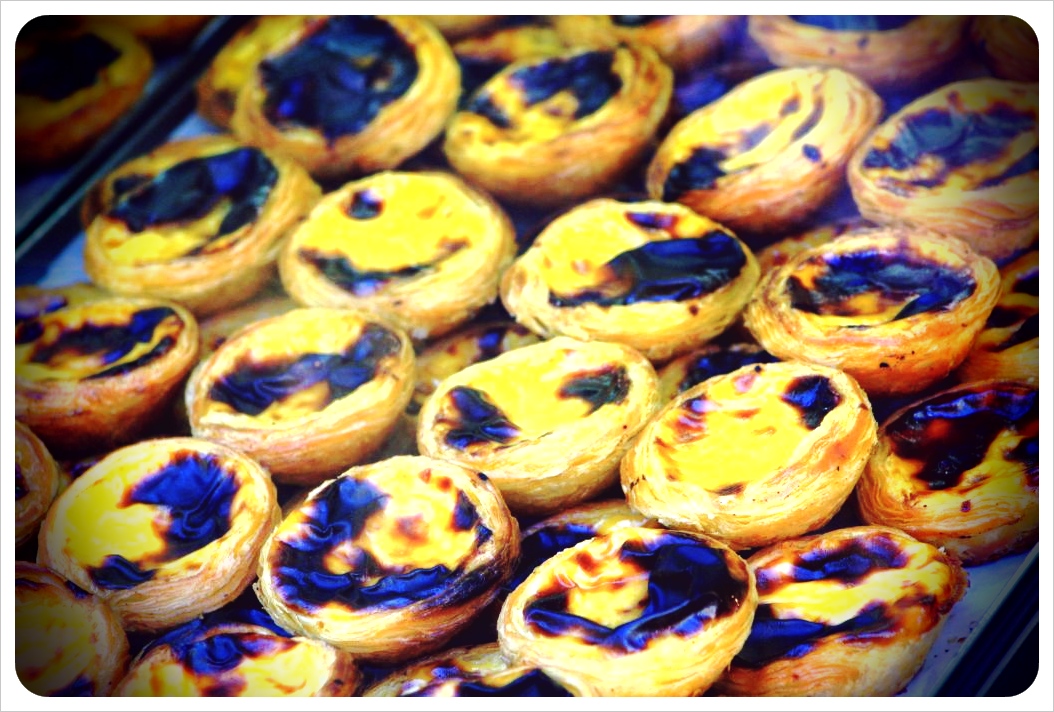 Another option is to take the bike right into the train station and hop on one of the coastal trains out to Cascais where the cycleways are perfect for peaceful riding along the shoreline or take the ferry across the Tagus to the Alameida and ride 20 minutes to the wide, sandy beaches of the Costa da Caparica. 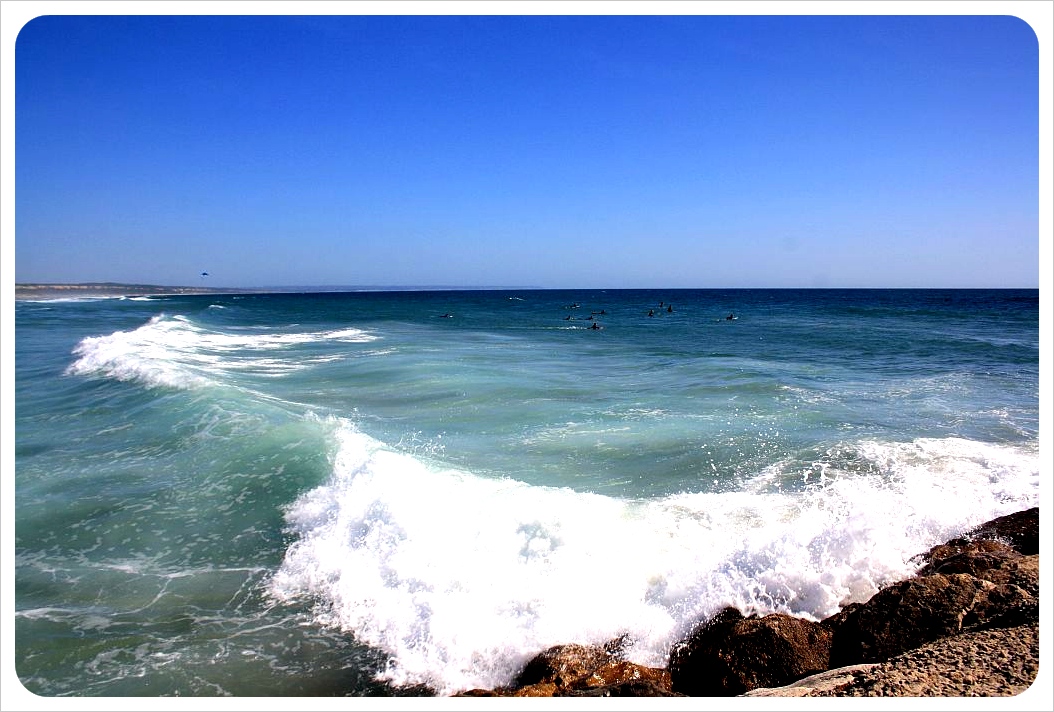 Cycling this expansive area of the coast in its entirety is too much for one day if you want to catch the ferry back in time to return the bike to Bike Iberia, so just cycle along, stopping off at whatever stretch of beach strikes your fancy for a few hours and then head on to the next.

While we loved the freedom we felt with our bikes in Lisbon, those seven steep hills in the center are too much for us mere mortals to attack on two wheels. This means that city center exploration up and down the character-building hills must be done on your own two feet, or you can hop on to one of the many streetcars in town which again evoke pleasant memories of San Francisco. 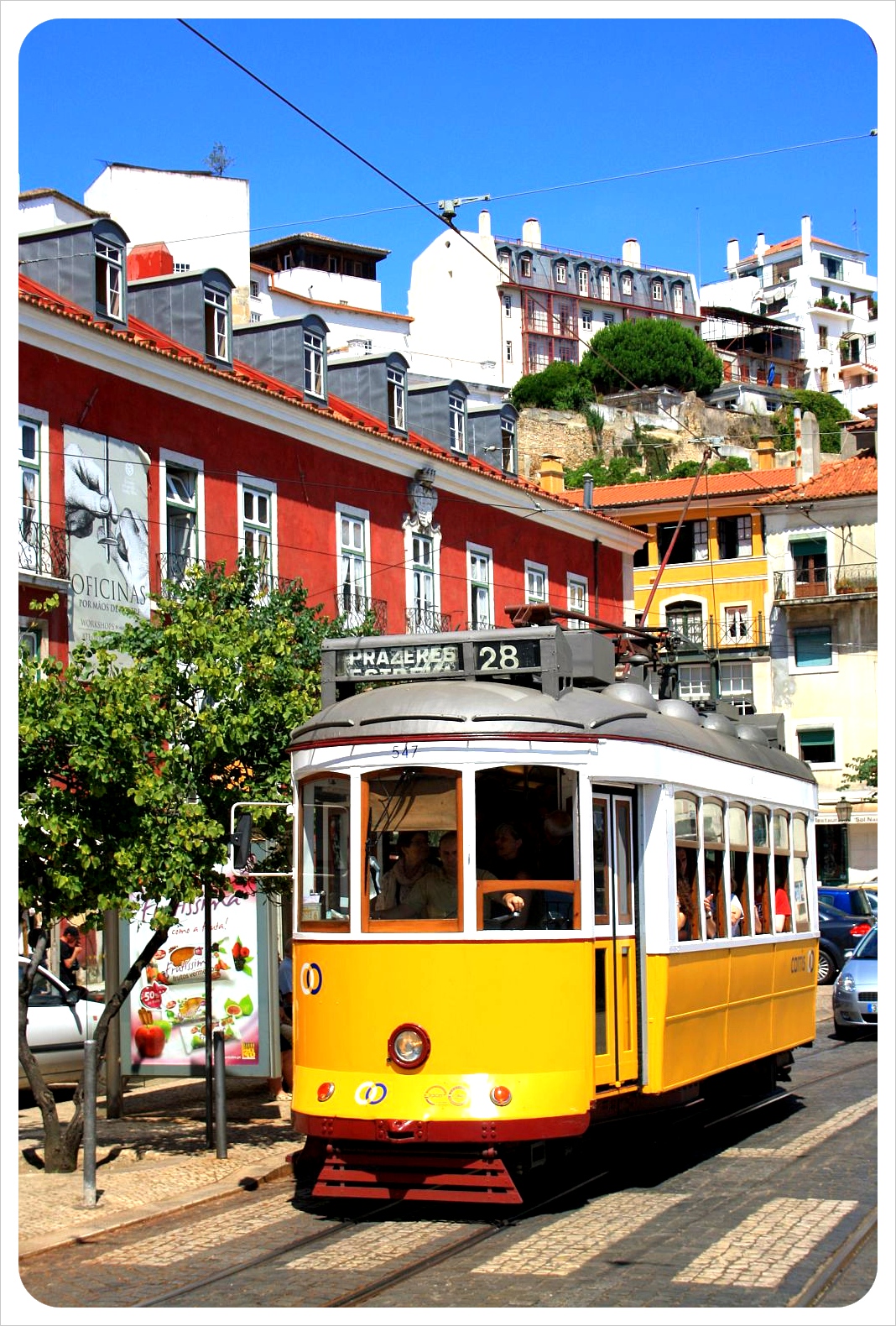 Lisbon on one wheel…

Exploring Lisbon on a unicycle? Honestly, we haven’t done that…yet? Maybe we will save this on for next time!

Either way, the more time you take to explore Lisbon, the more the city unfolds to reveal the depths of its charming character. Each city side street hides little secrets – a beautifully-tiled building, a centuries-old basement gin joint, tiny art galleries, or a pasteleria overflowing with good-natured Portuguese locals at all times of day, and with the sun and the sand so nearby, we found ourselves as cheerful as ever! Taking the time to explore the city on four, three and two wheels is what made us fall head over heels for Lisbon. 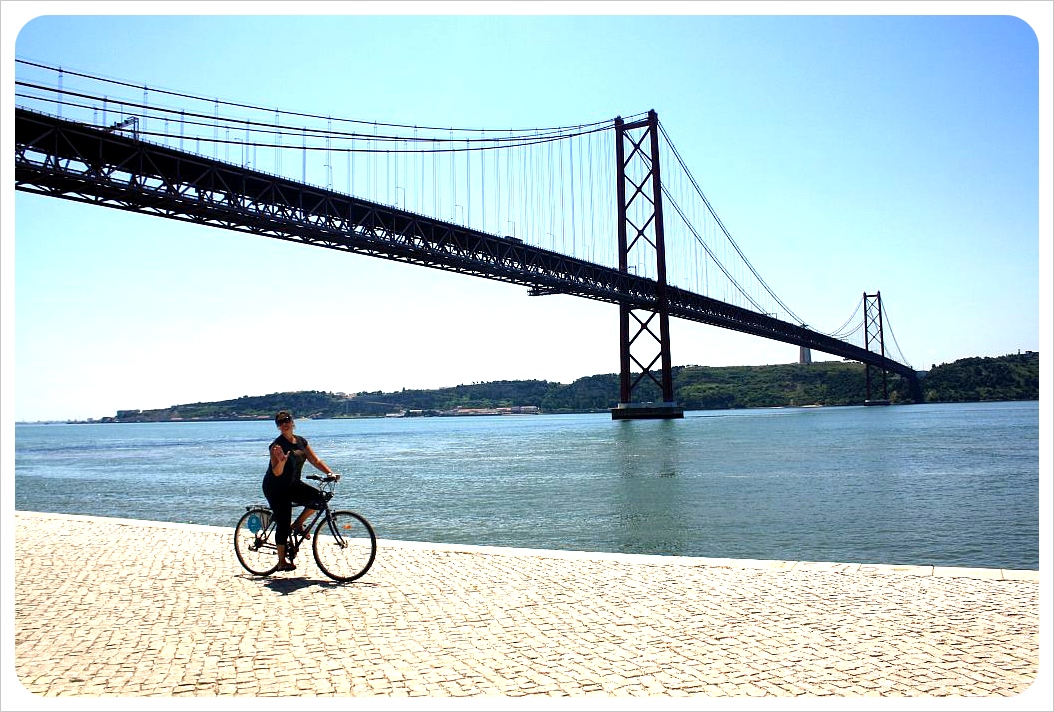