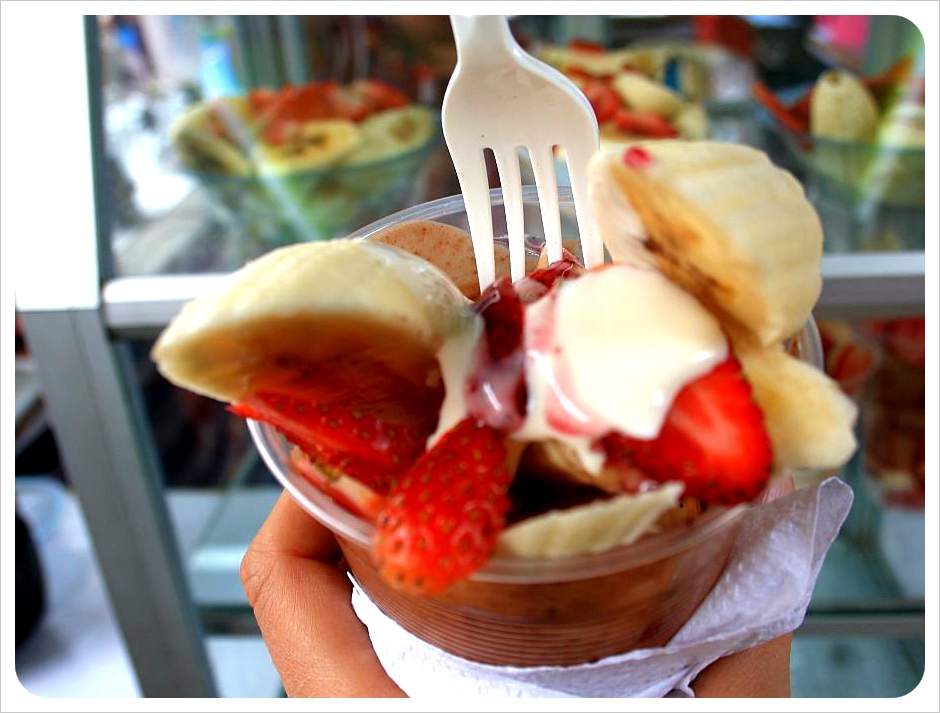 The Globetrottergirls are street food junkies, and we were not afraid to shout it from the proverbial rooftops during our 11 week stay in Mexico last summer. Embracing the local cuisine, in its most local forms, deepens the traveler’s relationship with the country and its culture, and it is fun to sample foods from food stands which essentially form an unofficial outdoor buffet in central parks throughout Latin America. Guatemala was no exception, of course: We couldn’t wait to eat our way through all of the street food in Guatemala. 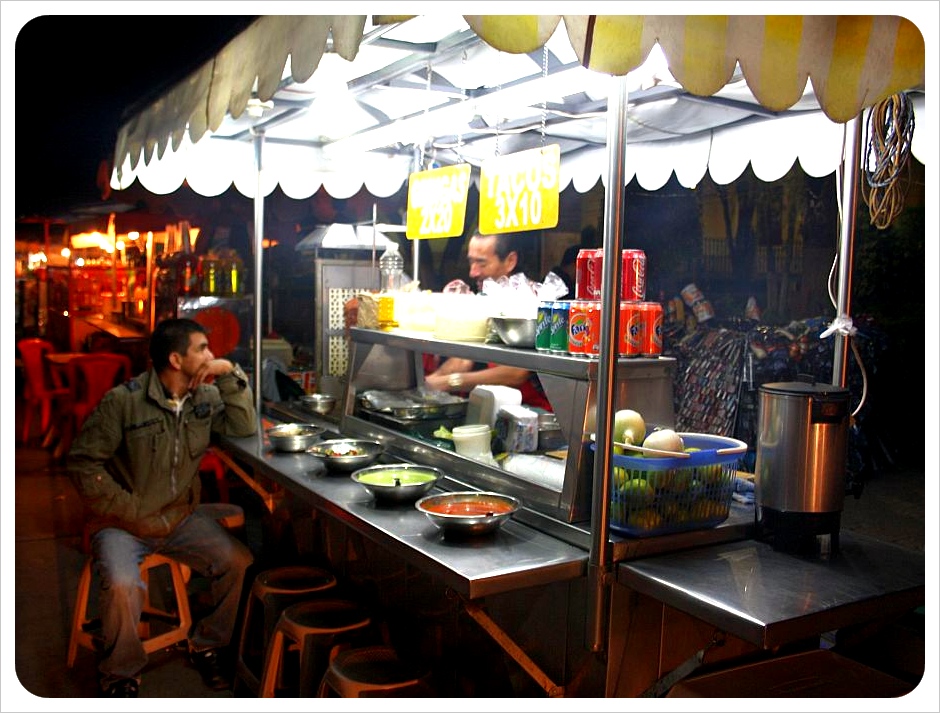 We were especially excited when we arrived in Antigua and discovered street food vendors galore lined up in front of La Merced church. This excitement was quickly put in check, however, as street food in Guatemala is very meaty. Lucky for the veggies, however, there are also loads of vegetarian options. Find a round-up of our street food favorites below:

This El Salvadorian staple is, as it turns out, also a very popular street food in Guatemala. The thick corn tortillas are stuffed with either refried beans, cheese, a bean-cheese combo, or cooked pork. A marinated cabbage and tomato salsa are added on top. Despite their popularity in Guatemala, this street food doesn’t begin to compare to the delicious originals made in El Salvador, where the cheese is tastier and the shape and quality are far better than most in Guatemala. But if you’re veggie and in a hurry, a pupusa will fill you up easily. Price: Q12/US $1.50. 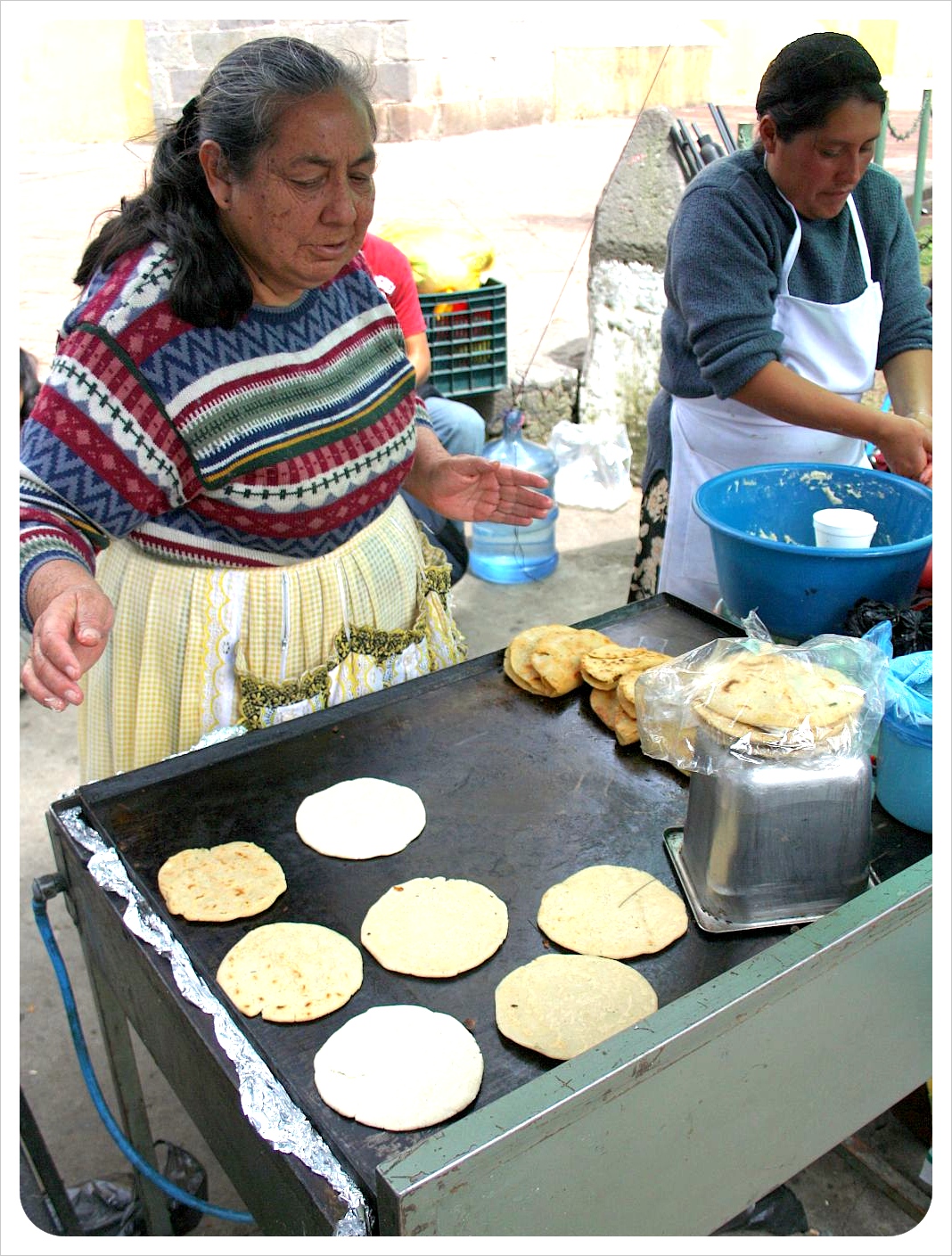 Another typical dish is elote, or corn on the cob. In Guatemala, elote it is not served with mayonnaise and chili powder as in Mexico, but rather salsa, salt and sometimes lime. Corn is the basis for the Guatemalan diet, and this cheap and not entirely unhealthy snack can be eaten any and everywhere. Price: Q10/US $1.25 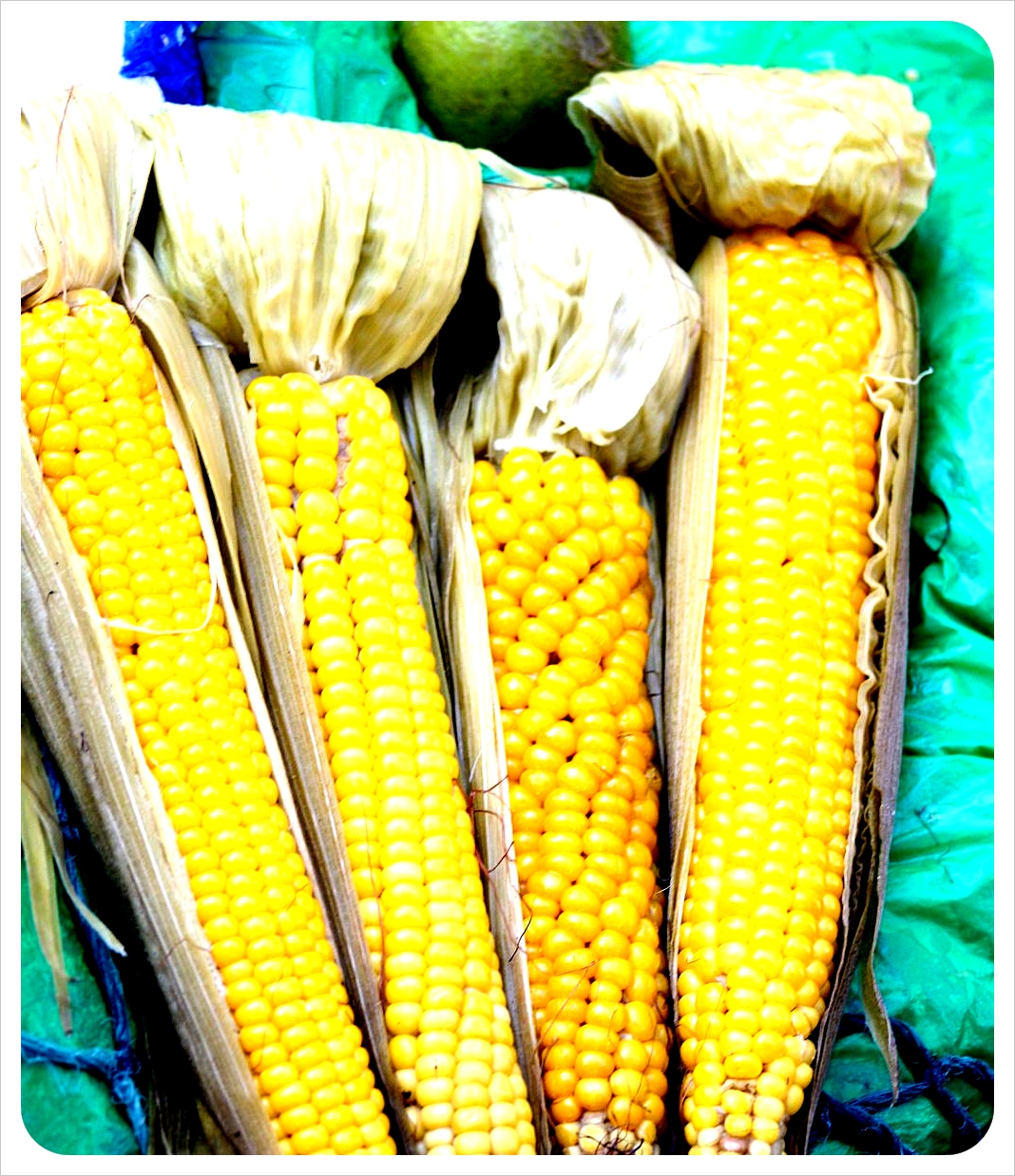 The word ‘taco’ in Mexico and Mexican cuisine means something different to what the word means in Guatemala, where a ‘taco’ is similar to the Mexican ‘Flauta’. One major difference is that in Mexico, corn tortillas are stuffed, rolled and then deep fried. In Guatemala, the rolled corn tortillas are first deep fried, and then stuffed with either potatoes or meat. This makes a difference as they are usually stuffed with more inside than in Mexico. As almost all the street food in Guatemala, tacos are topped with cabbage and cheese. No matter how they serve ‘em, or what they call them, tacos or flautas are one of our favorite street food items. For the best we found in Guatemala, head to Lake Atitlan’s village of San Pedro la Laguna, where, just up the road from the Pana dock, a little street vendor sells the best tacos in the country.*  Price: Q8/US$1

*the exclusive opinion of Globetrottergirls and though not official, trust us in judging their awesomeness. 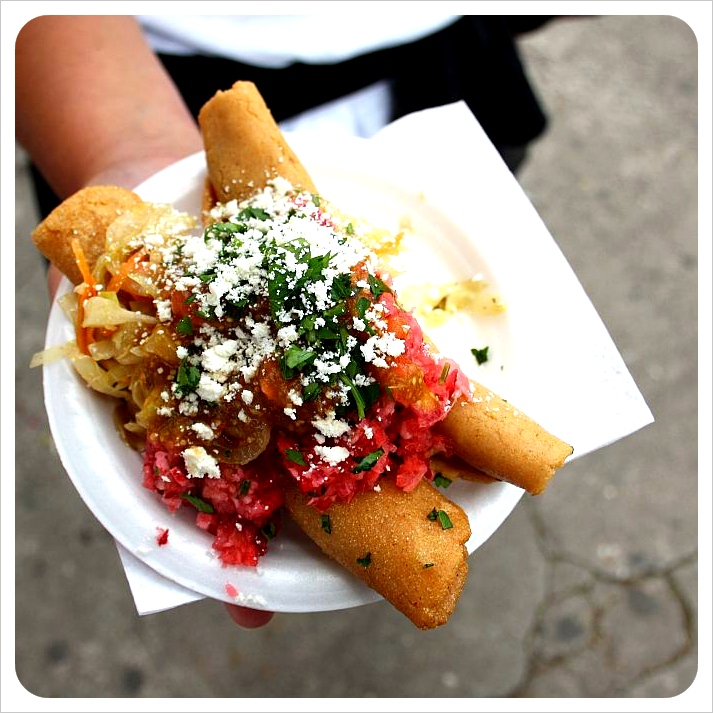 Tostadas are very similar to the Mexican ones – a crunchy, fried corn tortilla topped with refried beans (though in Guatemala, these are black beans, not pinto beans) and/or delicious guacamole plus lots of lettuce, tomoatoes, onions, white cheese ‘powder’, plus beets, cabbage, and, sometimes, a slice of a hard-boiled egg on top. A salad on a tostada for under a buck! Price Q6/ US$0.75 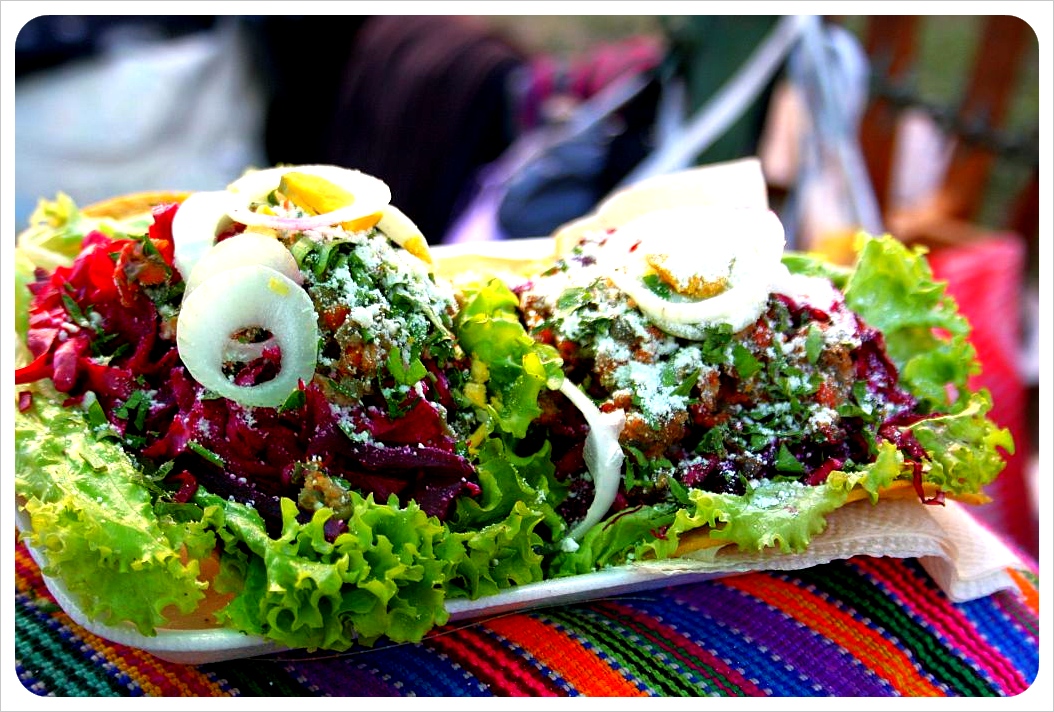 Literally meaning ‘little fillings’, a rellenito is just that – boiled/fried plantains stuffed with refried black beans and sometimes cheese. Mixing the sweet plantains with the savory black beans might seem a little exotic at first, but plantains and black beans are major elements in both breakfast and dinner dishes and it is very common to eat them together. These little wonders are delicious, filling and very veggie friendly. Price: Q6/$0.75 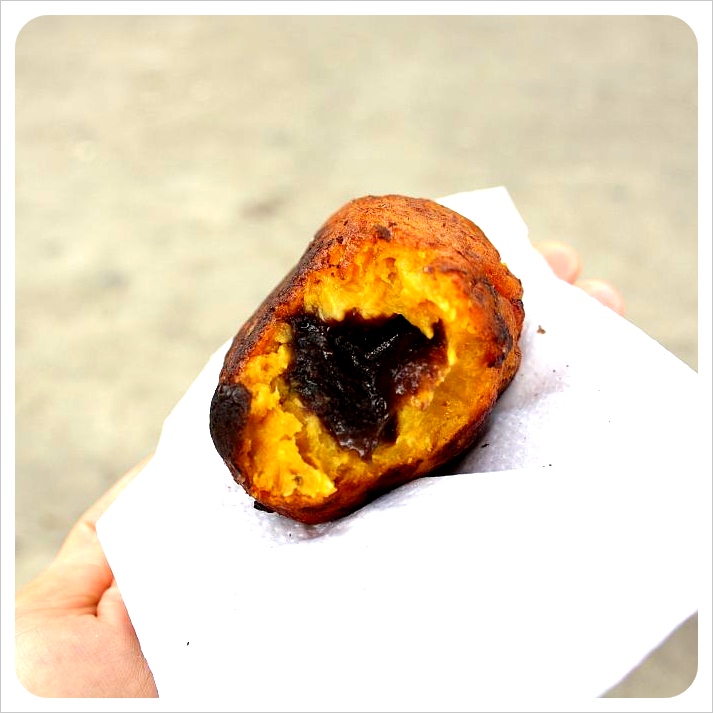 Tamales are familiar to any fan of Mexican food, but the Guatemalan version varies slightly. These tamales are just plain old tamale corn flour base with pieces of corn inside, wrapped in a large green leaf. They normally come all wrapped up, dry and with no sauce. Dani hates corn tamales, and won’t eat them. They are certainly not my food of choice, but they do the trick, plus they are everywhere. Price: Q10/$1.25 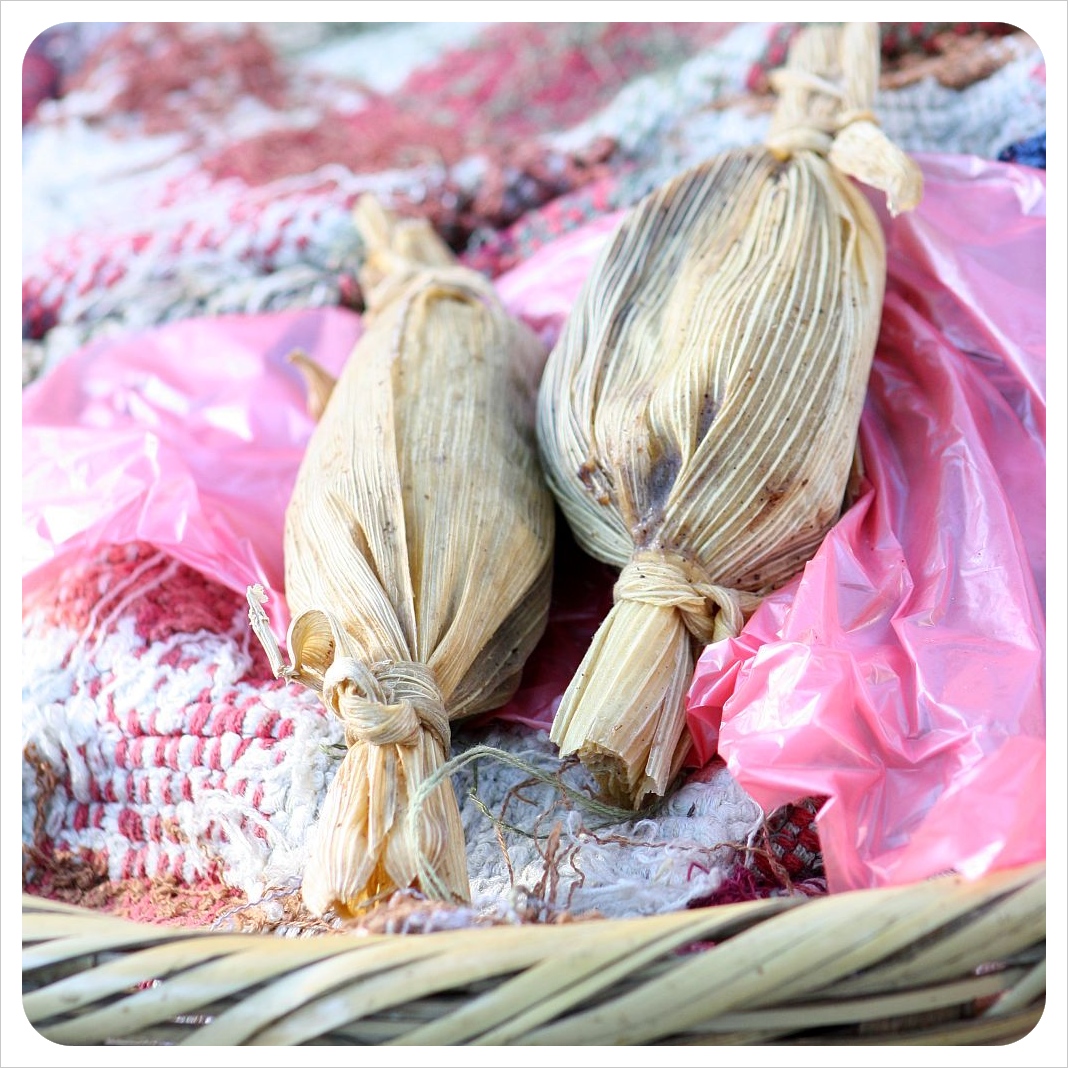 Buñuelos and other sweet street food

Street food in Guatemala is big on sweets. There are the multi-colored popcorn balls, biscuit rings, something similar to peanut brittle, and loads and loads of donuts, but Dani’s absolute favorite are the Buñuelos. We’ve come across this word a few times to describe very different dishes. In Guatemala, fried dough balls, usually three, are served up with lots of warm, if not overly watery, syrup. Apparently they are a typical Christmas dish, but we found them already in early October. Price: Q10/US $1.25 for three 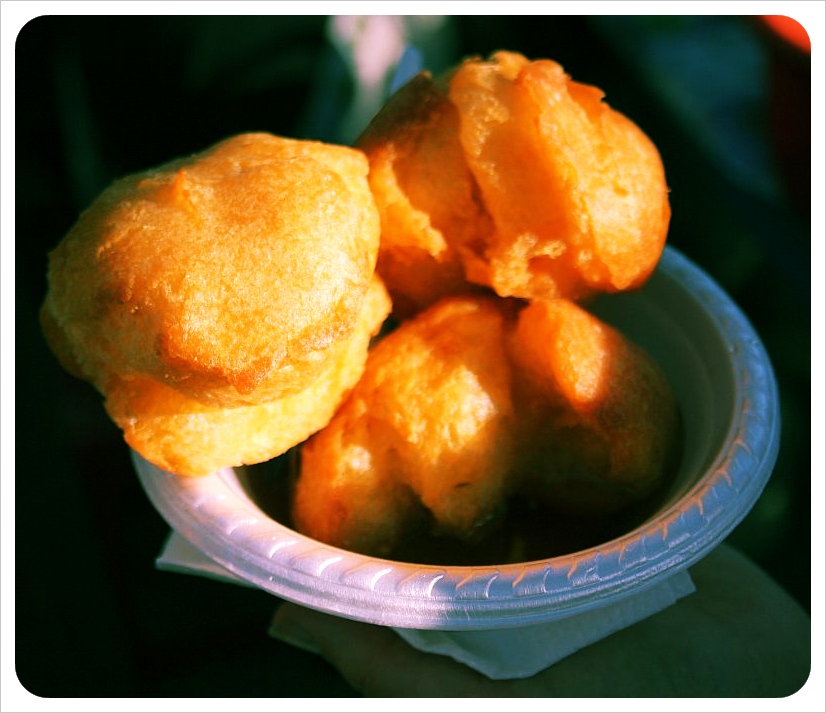 For the meat-lovers out there, the street food options in Guatemala triple. The meaty varieties include salchichas (sausages), chicharrones (fried pork skin), cheveres – hot dogs (apparently there is a delicious type with avocado). What’s more, cheap fried chicken, burgers and fries rule the streets of Guatemala. Sandwiches are another popular item, with baguette-like white bread stuffed with lettuce, mayo, onion and usually fried, breaded pork. 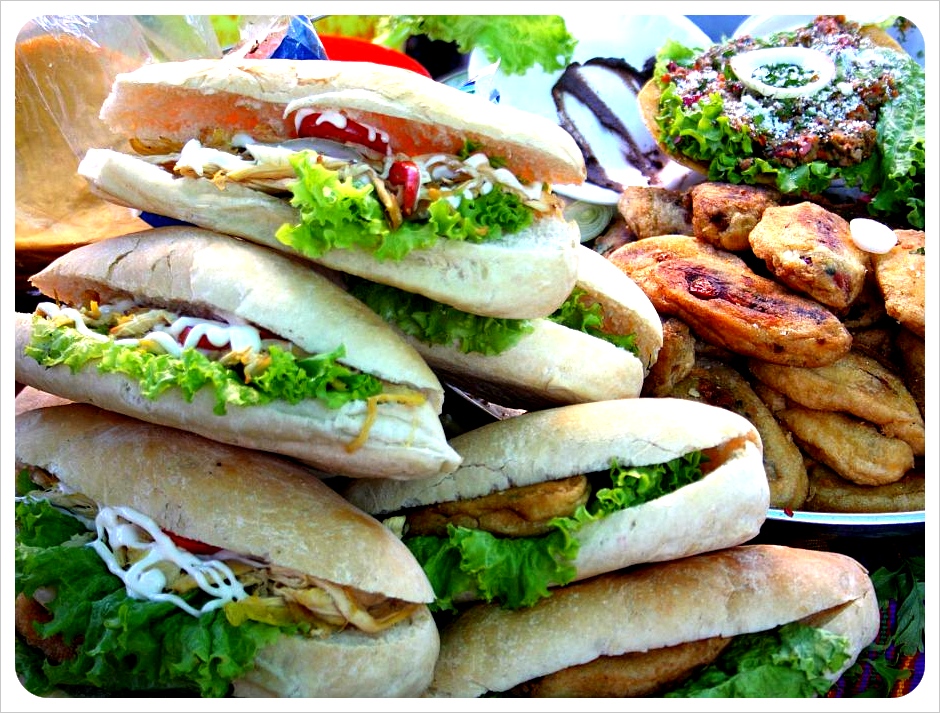 It has been especially recommended to us that you sample the garnachas, small fried corn tortillas which are stuffed with shredded meat and cheese and usually topped with cabbage, and the chile rellenos. The smaller sweet red peppers (similar to bell peppers, but smaller) are stuffed with beef, dipped in egg and deep fried, squeezed flat and then put on French white bread, to which cabbage, beets, carrots and a special sauce are added. Of all the meaty street food, we most wanted to try these chile rellenos, but there is never a cheese variety, always meat only. 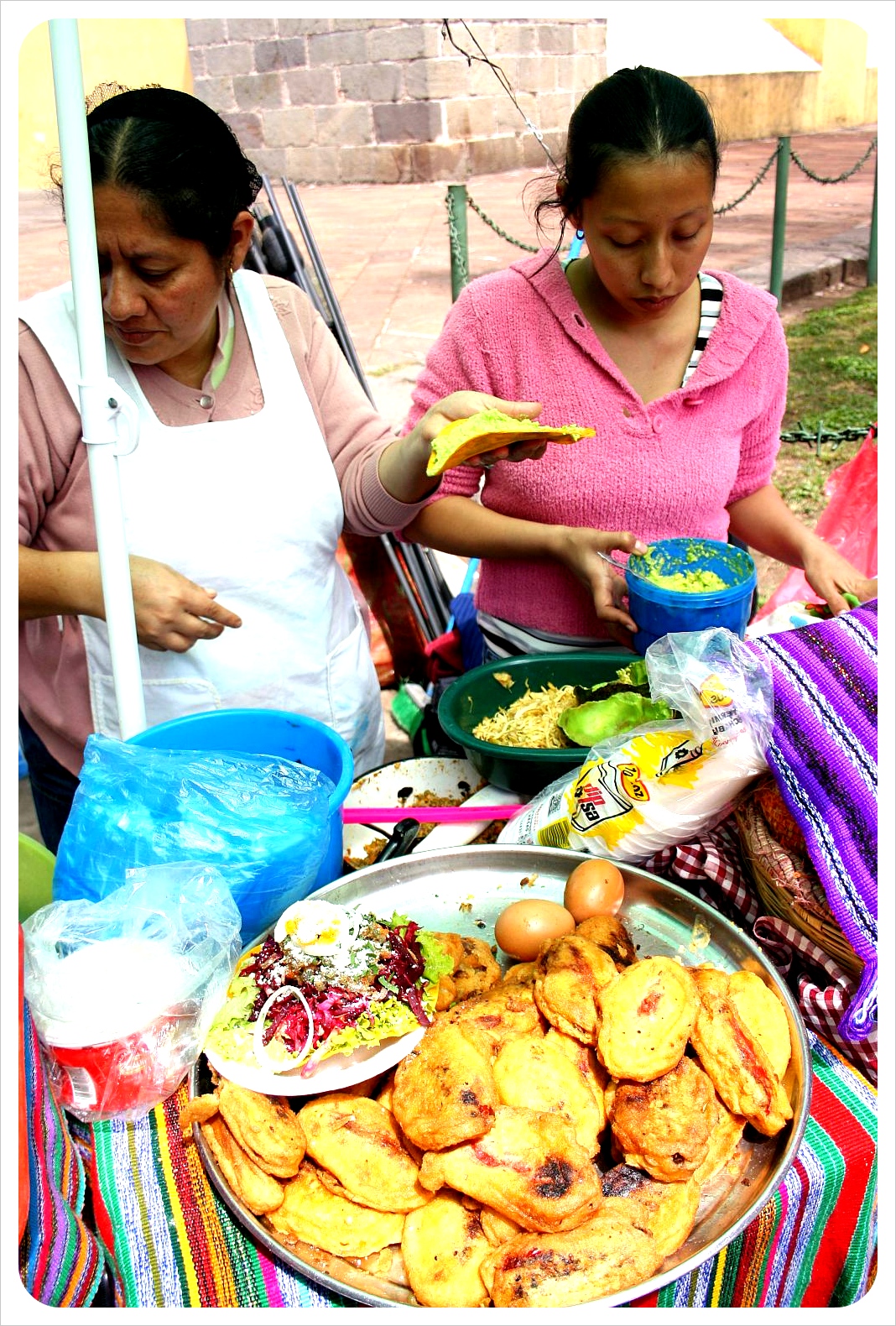 Before you try street food in Guatemala

We did find eating street food in Guatemala a bit riskier than in other countries in terms of belly aches and less ladylike bowel issues. It is especially important in Guatemala to pay attention to who is eating where – seek out the popular food stands. If 20 locals are surrounding the street food vendor, jump in line there too. Locals want clean, healthy food as much as visitors do. Do not feel deterred by this warning, but do make sure you choose your street food wisely. 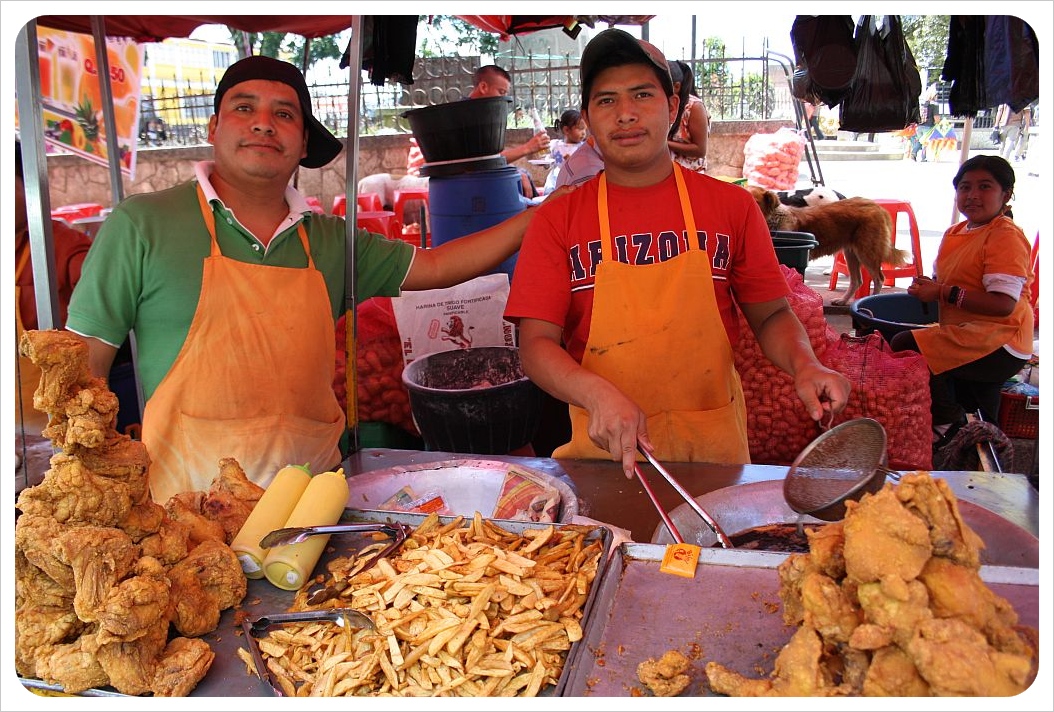 Have we missed any delicious Guatemalan vegetarian street food items? Feel free to make suggestions for others in the comments below. What are your favorite Guatemalan foods?