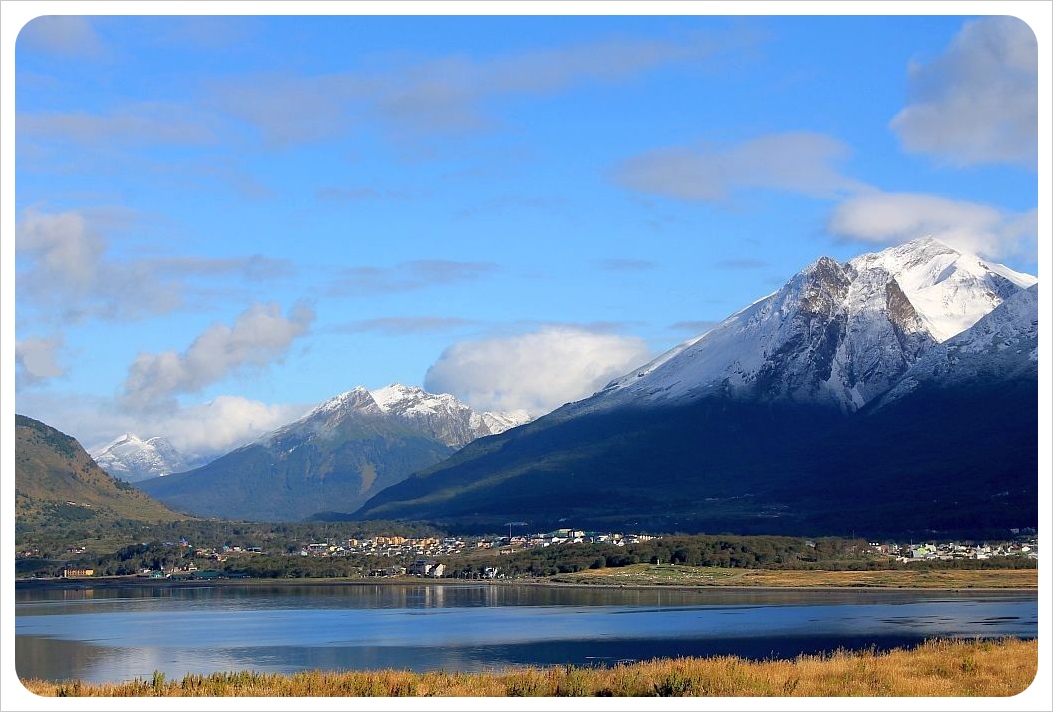 “Each man should be able to marry two women, that way no man has to be considered a cheater,” the trucker rationalized, taking long drags on his Benson & Hedges cigarette. Blowing smoke politely out the window for our benefit, his cackling laughter turned in to a deep, sickly cough and the glint from his gold tooth disappeared behind a smirk.

When hitchhiking across one of the most barren, isolated landscapes in the world (you can watch our hitchhiking video here), we felt that smiling and nodding was the best way to handle this macho Argentine. I sat in the passenger seat, Dani was in the middle separating us. I imagined what I would do if he started to touch her leg, but instead he bragged about his 29 year old wife in the Dominican Republic. Handing us each a lollipop (gag!), we kept them wrapped and let him talk as we passed groups of guanacos grazing on the vast Patagonian steppe.

Though repulsive and sexist, he was not the mass murdering criminal I half-expected to pick us up when we discovered in Porvenir we would have to ‘viajar a dedo’, travel by thumb, to Ushuaia, the southernmost city in the world. 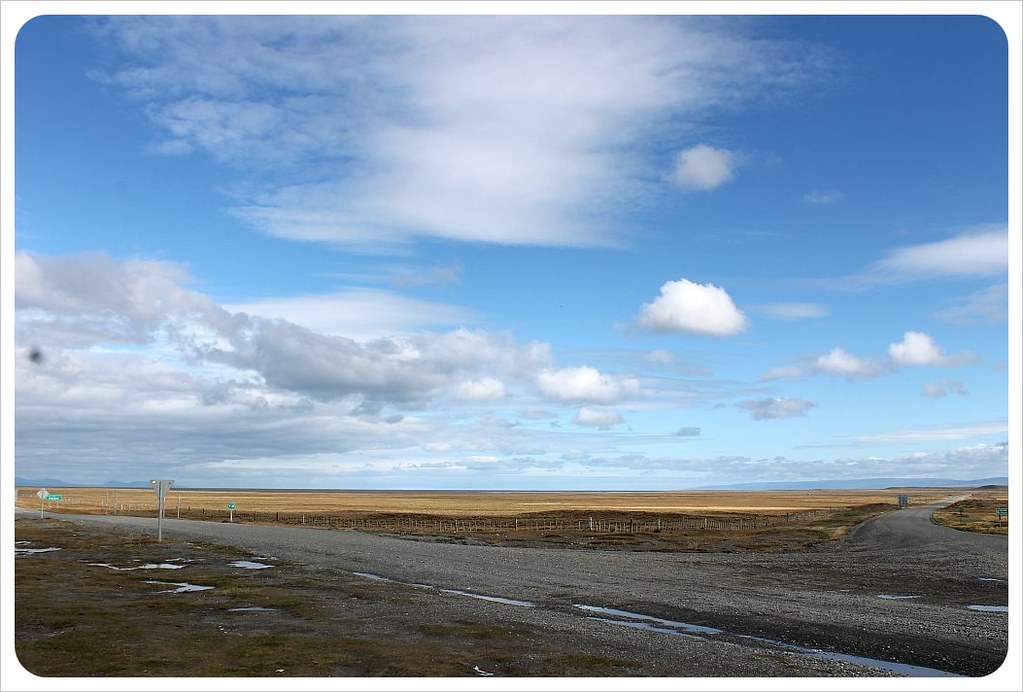 Porvenir, and the future of our trip

For 35 days we had traversed the continent southward by bus, criss-crossing the Andes between Argentina and Chile several times before taking a ferry from the southern Chilean city of Puntarenas across the Straight of Magellan to Porvenir, a small Chilean town and possibly least used entry point to the island of Tierra del Fuego.

Porvenir means ‘future’ in Spanish, but this barren 5,000 person town feels timeless in a nothing-ever-changes way. The guesthouse owners in Puntarenas discouraged our trip here. “A visitor can do nothing there,” he warned, but for some reason it had become a pressing goal to see what a small town so far south felt like. Most people take a bus the long way up and around from Puntarenas, crossing onto Tierra del Fuego by a more well-traveled route, but we decided we would go straight across Tierra del Fuego instead.

When we hopped in the taxi from the ferry to our wonderful Bed and Breakfast Hosteria Yendegaia (which we reviewed here), we causally asked the the driver where we could catch the bus to Ushuaia from here.

“No bus”, he said. “Not to Ushuaia, not to anywhere,” he emphasized. In other words, there are no buses running into or out of Porvenir – ever.

We began to worry, but when we asked Vincente, the trustworthy hotel owner, he replied as though it were so obvious:

“Just hitchhike. It’s the way to do it here on Tierra del Fuego.” 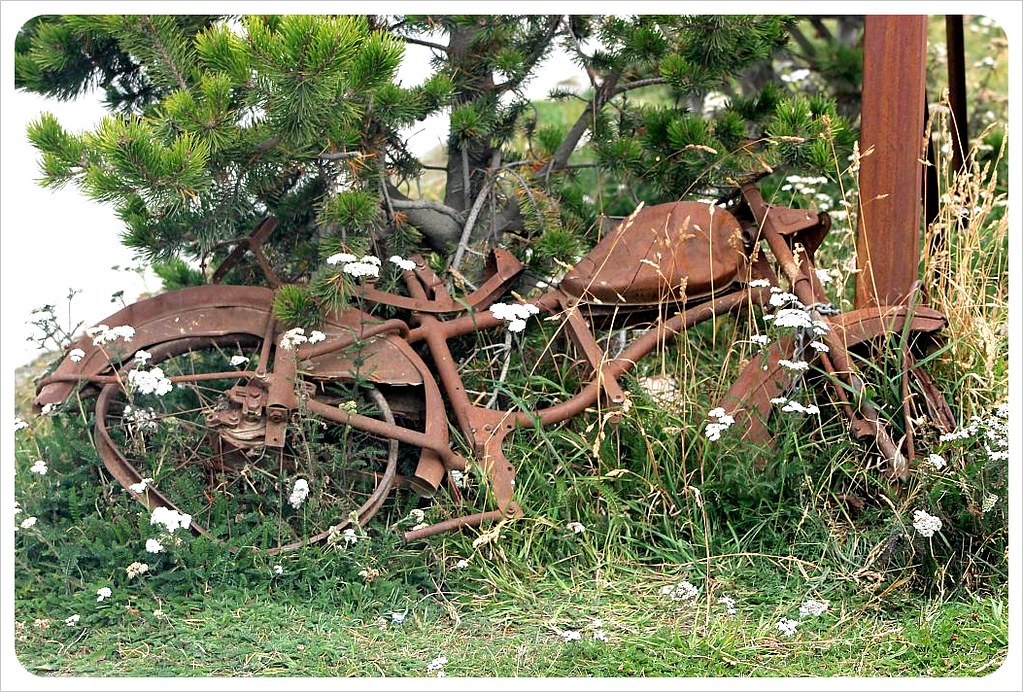 What two women would jump into the cars of strangers to drive across hundreds of miles of nothingness? We could be killed or left to die in the middle of nowhere, grazed upon by evil llamas…

Ever so slowly I swiveled my head in Dani’s direction, suddenly knowing the adventurous spirit that would surely be beaming from her eyes.

“It’s going to be fine,” she assured me, with a skip in her voice. “We’re safer in a place like this than hitchhiking in the U.S. or even Europe.”

By 9am the next morning we had our packs loaded up and walked down a few blocks to the main intersection in town. Dani proudly stuck her thumb in the air while I kicked rocks half-hoping not to get picked up at all. Not five minutes later, a pick-up truck stopped and a stocky farmer’s daughter and her little brother encouraged us to get in. 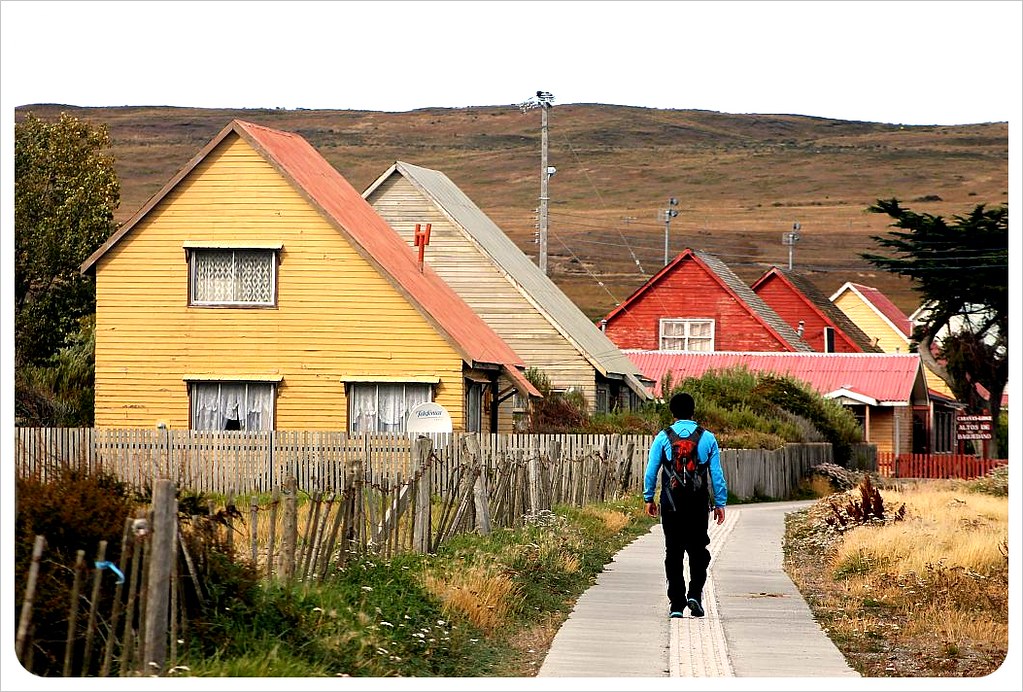 I went to toss our bags in the back, but it was filled with beets and loads of sheep poop. This is going to be so harmless, I reassured myself, if my only concerns are not squishing beets or getting our packs dirty.

Little did I know the adventure we were about to embark on.

“Bags stay with you,” she said matter-of-factly. “First we stop at my house to pick up the dogs, then on to the estancia. It’s on your way.”

By ‘estancia’ she clearly meant working farm, not vineyard or fancy farm house.

We sped up a gravel road for 30 minutes, making polite small talk until pulling in to a plot of land covered in rusty cars, old tires and tin shacks. Cats crawled near our feet, one with eyes covered in mucous. Three dogs were released from what seemed like several packs of canines. They hopped right up into the back of the pick-up and a man tied a metal chain through their collars and around the spare tire to hold them down. Although we imagined the worst, once we set off, they were smiling and howling, tongues wagging in the wind. 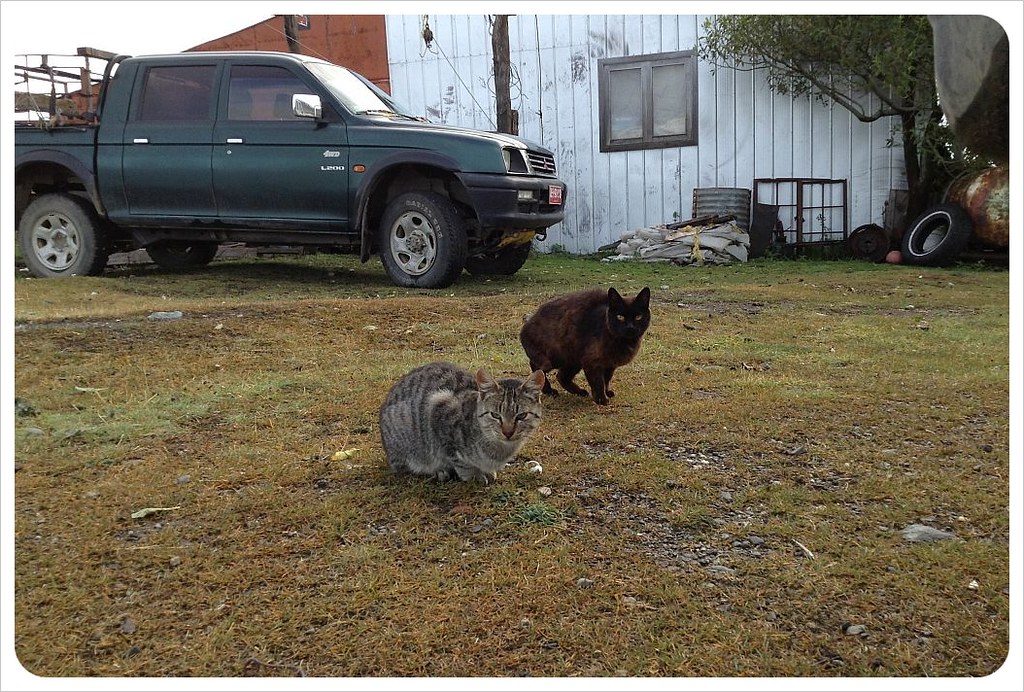 The farmer’s daughter sped like a bat out of hell around hills and along lakes that few non-locals probably ever get the chance to see. She sang loudly and made a bit more small talk until we sped up to a dilapidated old semi-truck.

“When I drop you off, wait for him,” she said, barely slowing down to pass the truck. “He’ll take you next.”

She said the same when we swerved passed another, newer white truck.

After flying through the incredible countryside, our bliss was abruptly disrupted when we stopped at a driveway that led over a hill. “We’re here.”

We hopped out and suddenly, as her taillights disappeared over the hill, we were arranging our backpacks on the side of an unpaved road, no idea where in the world we were.

Would the trucks actually stop?

Would these trucks really stop for us? Worse question: What if they didn’t? What would we do then? How did the farmer’s daughter know they would stop at all?

The white truck, the one in slightly better condition, didn’t even slow down as he passed ten minutes later. He waved his finger at us, No no no, and our enthusiastic thumbs wilted.

One more chance, the powder blue truck lumbered up the road. We were sure he would stop. Why? Because the farmer’s daughter said so.

We were now who knew how many miles from Porvenir, hundreds more from the border crossing at least. In that moment of feeling so totally exposed, I had a vision of an entire horse skeleton we once saw on the side of the road in Honduras and thought how we would look, laying on the side of the road, our skeleton arms looped through our faded backpacks…

Suddenly, the truck stopped and started to back up. He had reconsidered and we ran toward him, so incredibly thankful to be out of the wind. He tied our packs up outside on the empty truck bed and we hopped in the cab. 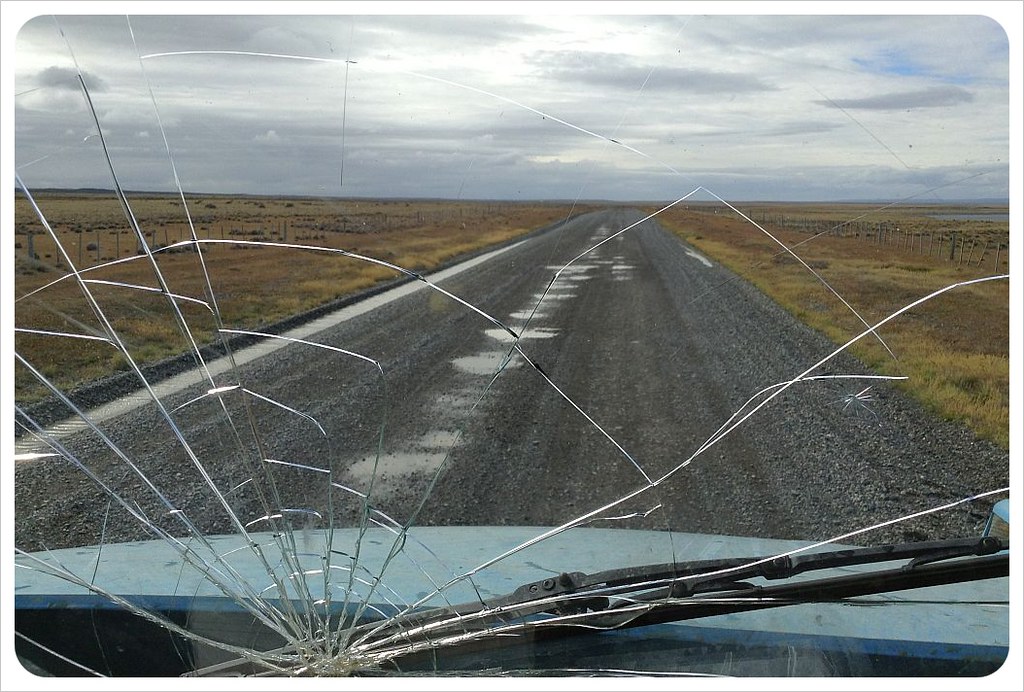 “You ladies would had been stuck out there,” he explained in his mumbled country Chilean accent and though he didn’t smile, he was friendly, stoic and reserved. I looked at a sticker on the passenger door and it said the truck was Made in the USA, For Export Only, and I thought how, held up to an infrared light, you might find the same sign on me.

For over an hour we bounced in near silence until reaching the cross roads, where he headed south, staying in Chile, while we would head east toward Argentina with whoever would pick us up next.

This landscape was flat, nothing to stop the wind from gaining speed. As I peeled carrots to snack on, the wind blew the peels off into the distance. We ate inside the wind shelter, which reeked of urine and was covered in pithy quotes and graphic pictures. Dani ran out to chase cars every time one passed, and we imagined sleeping inside the shelter. 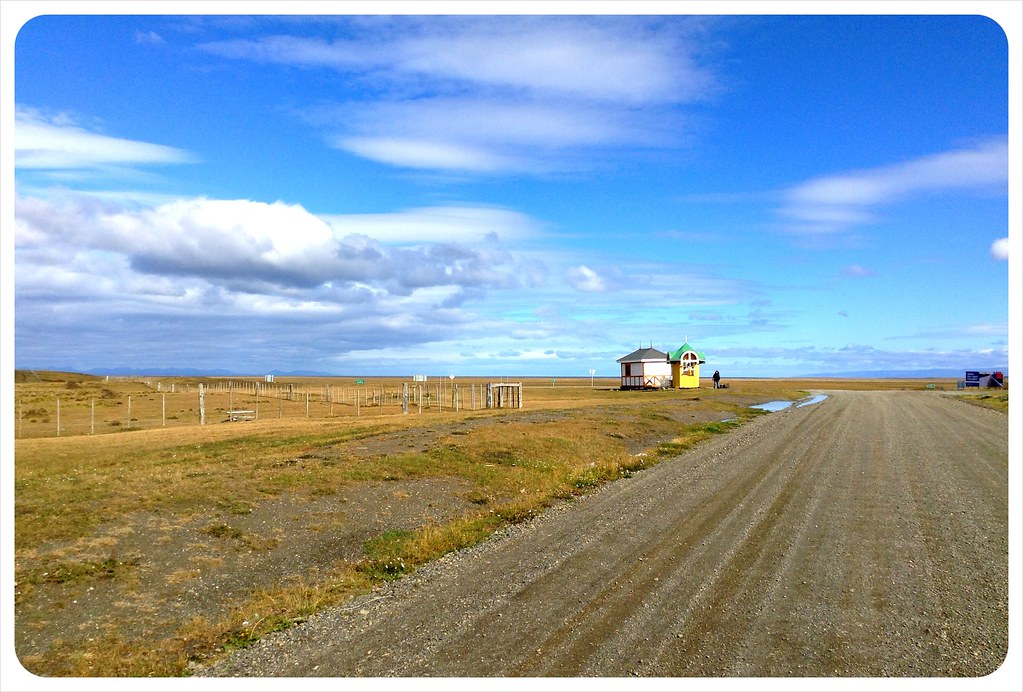 Would we ever reach the border that day?

In the distance we saw a bright flashing light, streaming right at us. The sun reflected off an extra-long semi-truck lumbering down the road right toward us, transporting over a dozen cars. Rather than turn the corner, this truck slowed down and stopped right in front of us and went to work detaching the massive car trailer. Clearly not local, the truck’s cab was brand new and looked like a Smart car – until it pulled up right in front of us and the driver motioned for us to climb the three steps to the door and hop in.

And there he was, the sexist, macho husband of an unsuspecting woman in the Dominican Republic. He came off friendly at first, giving us a tour. He had a twin bed with colorful sheets wedged right behind the seats, a small fridge, microwave and cabinets, where he pulled the lollipops out of.

Despite referring to Dani constantly as his future wife, he served his purpose and we crossed through the Chilean border and onward to the official Argentine entry point. 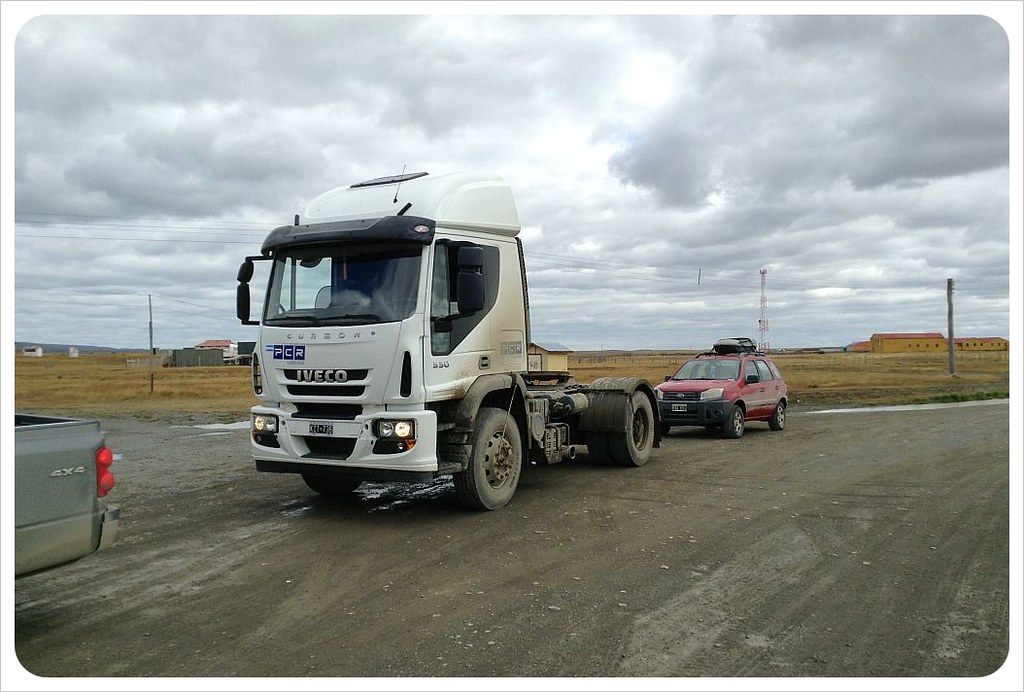 Homeless at the end of our journey

We felt quite adventurous, but the border patrol’s indifference to our ‘mode of transportation’ (hitchhiking) made us realize with a yawn and wave through, this happens here every day.

Happy to be away from our sleazy ‘friend’ we now stuck our thumbs out again right in front of the border patrol, and a young Argentine in his late 20s picked us up right away. Only 88 kilometers separated us now from Rio Grande, a large yet unremarkable city with buses running every hour to Ushuaia and he sped so fast down the paved road that even Dani, my pedal-to-the-metal German autobahn lover was gulping.

He dropped us off at an office where we bought tickets for the remaining three hours to the end of the world. This was the end of our hitchhiking adventure in Argentina. The brand new van was spotless, organized and no one talked to us, which felt strangely sterile and boring after spending the entire day in such intimate quarters with strangers. 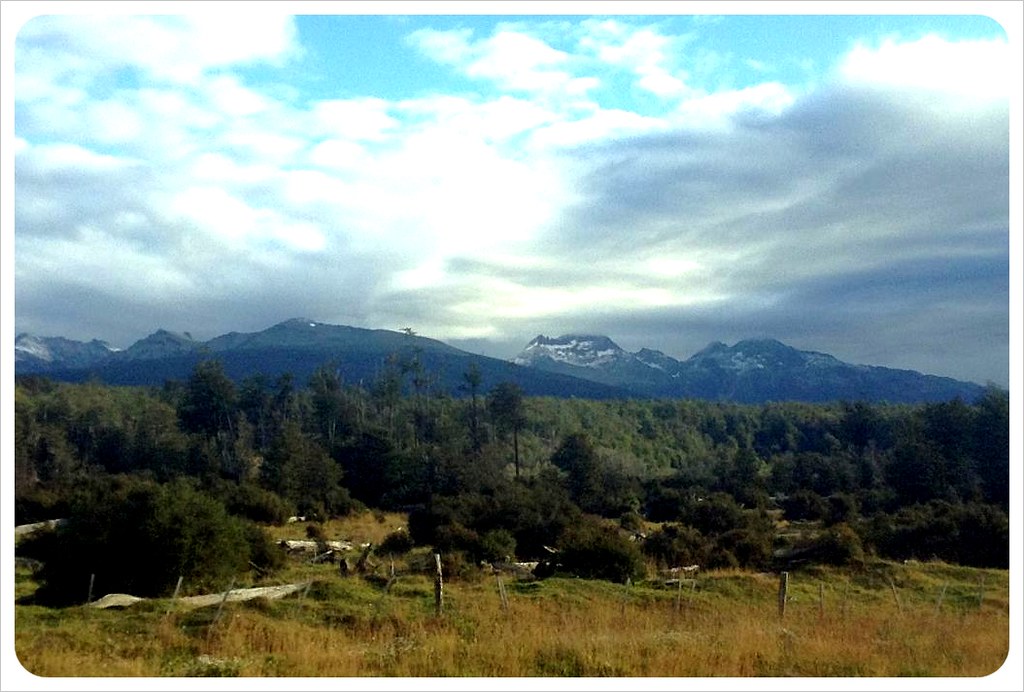 We were the last ones out of the van, left to spend the next hour traipsing up and down the hilly streets searching for a hostel at 8pm on a Saturday night at the end of the world, but it felt great that finally, ten hours after we began, we arrived to Ushuaia, Argentina, just 1,000 miles from Antarctica and over 4,000 miles from Santiago, where this six-week adventure began. 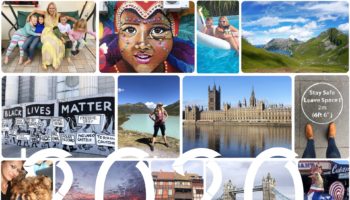