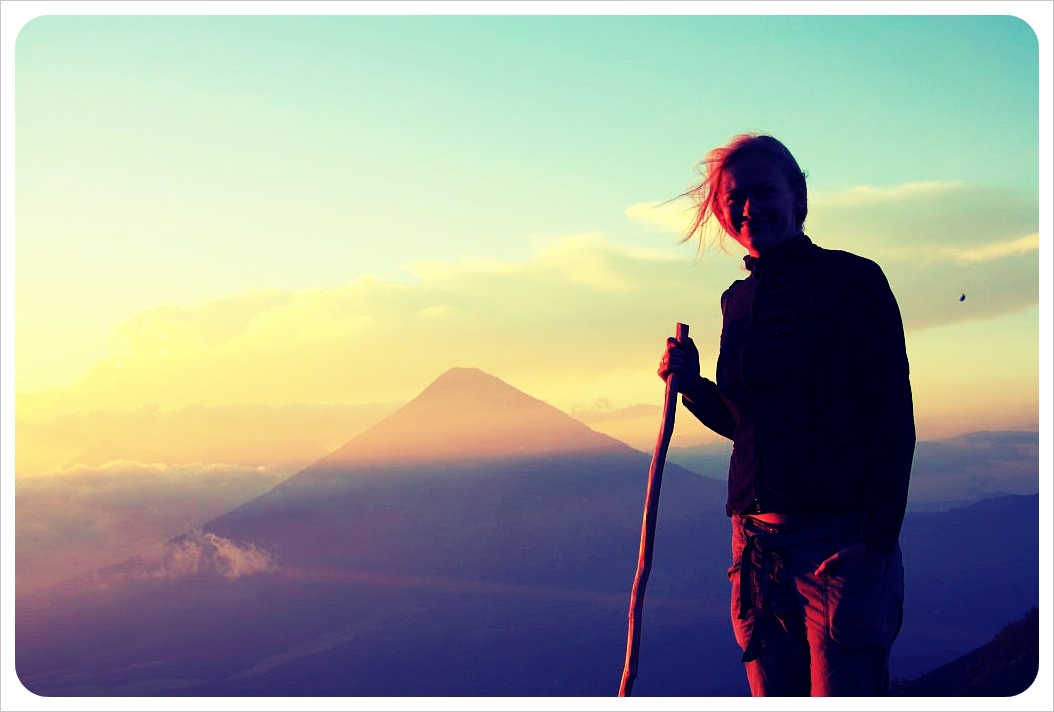 It’s not like I woke up one morning with the burning desire to climb one of the world’s most active volcanoes. In a country like Guatemala, however, where over 30 volcanoes all but define the national landscape, opportunities to climb both dormant and active volcanoes are everywhere. Even not-so adventurous visitors can become volcano climbers here thanks to the countless deals pushed by infinite travel agencies. This is how I found myself packed into a shuttle with ten fellow climbers, a mix of Canadians, Americans, Dutch and British tourists one recent afternoon, as we set off to hike the famous Pacaya volcano.

Pacaya is the most climbed of Guatemala’s active volcanoes, thanks to a combination of its close proximity to tourist-hub Antigua and the relatively easy 2550m climb. The nearby (inactive) Volcano de Agua and Volcano San Pedro at Lake Atitlan, both popular with climbers, soar 1000 meters higher into the air. 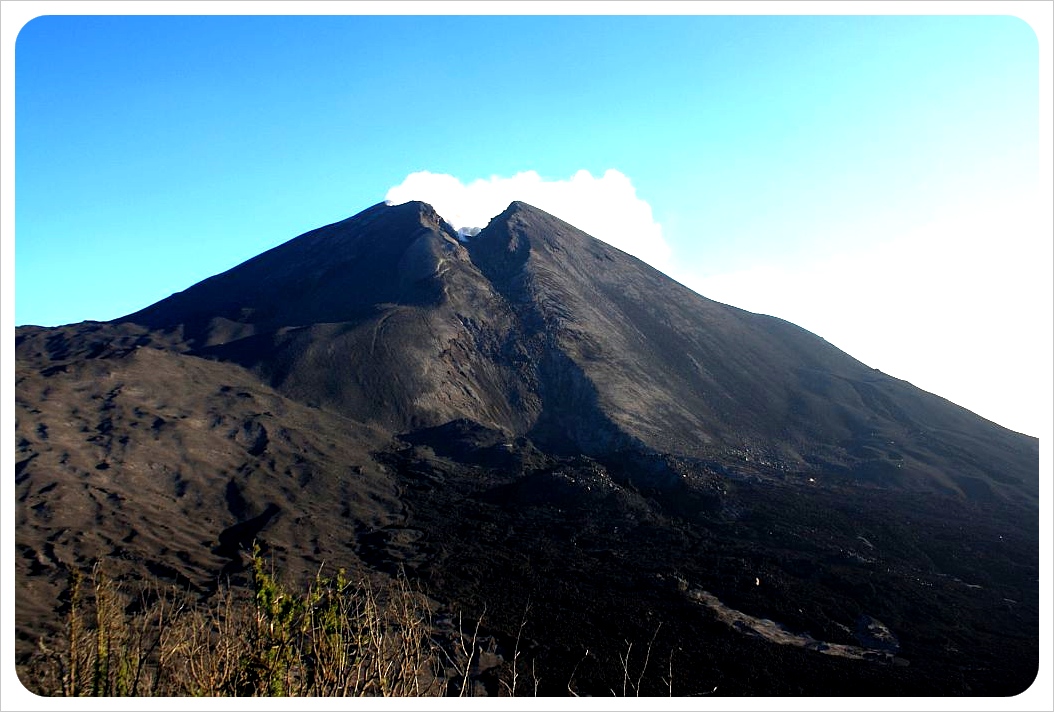 We arrive 90 minutes later to the village of San Vicente, the start of the volcano trail. Within nanoseconds local children engulf the mini-van, trying their best to sell home-made walking sticks for the climb ahead. I decide to invest the 3Q ($0.38) for the stick, mostly for the way back down in the dark. There are two climb times at Pacaya, leaving either at 8am or 2pm. I chose the afternoon climb to experience sunset on the summit and see the lava glowing in the dark.

At this point, we are still far from the top; Pacaya’s peak still out of sight. We won’t actually be hiking straight up Pacaya, starting first at the base of Chino, one of the three summits that make up the Pacaya volcano complex (they are: Cerro Chino (2260 m), Cerro Chiquito (2460 m) and Cerro Grande (2560 m). The path leads first to Chino’s crater and then transfers over onto the path to Cerro Grande, the highest summit. 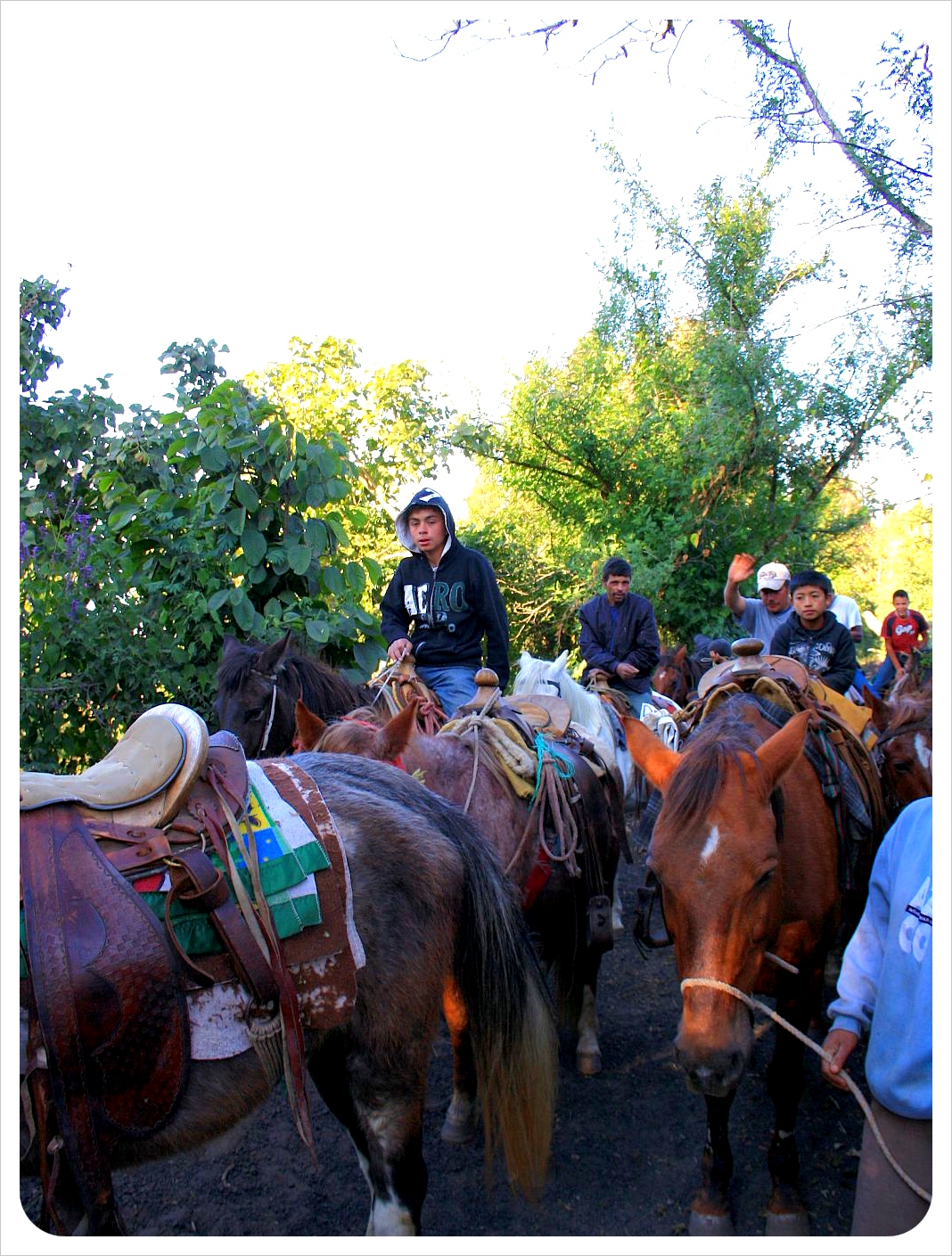 Stick in hand, I begin the hike near the back of the pack, with six horses trotting directly behind me. Their owners hope to serve as taxis for those who can not make the climb alone. Since I don’t think of myself as much of a mountain climber, I feel a little pressure with the thundering hooves in my ears. The hike starts off easy enough, though the paved path quickly disappears and pretty soon we find ourselves walking through dark volcanic ash. We push ahead, and soon after we get the first glimpse of Pacaya’s peak spouting steam in the distance. 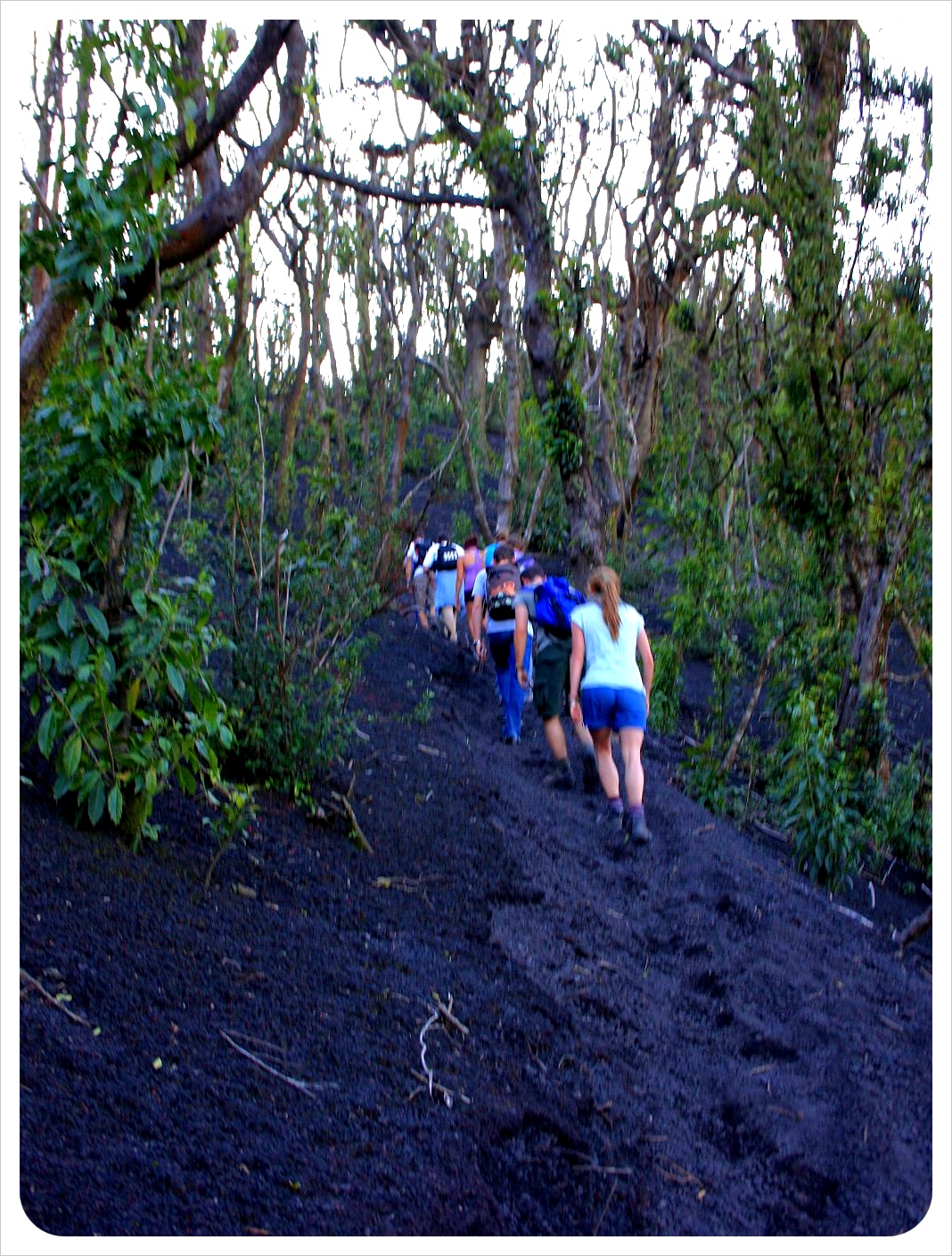 This is the first time that I realize that despite the countless package deals,  this hike involves some serious potential danger. Pacaya has erupted around 20 times since 1565, and has been continuously active since the mid-1960s. The last major eruption, on 28 May 2010, killed a journalist who, ignoring all warnings, climbed Pacaya to get the first images of the eruption. Even on guided hikes, climbers have been injured by falling ash and hot lava streams. Continuing our uphill climb, I silently plead with the volcano not to wake up during today’s climb. The path gets steeper and steeper until eventually, clearly unneeded, the horses stay behind. We make our way through a patch of trees which still show signs of the most recent eruption. Plants are partially covered in ash, treetops are burnt, and the normally abundant wildlife – birds, pumas, wild cats, snakes and other animals – have deserted the area, taking with them all signs of life.

We emerge now above the tree line and reach the first stop – the rim of the Cerro Chino crater, 300 meters below Pacaya’s peak. We circle the rim and descend onto what is now the side of Pacaya itself, with views of Volcano Agua and Volcano de Fuego and the double summit of Volcano Acatenango. I am happy to be climbing in November, as it is dry season and the sky is clear of clouds so that the entire landscape can be seen far into the distance. 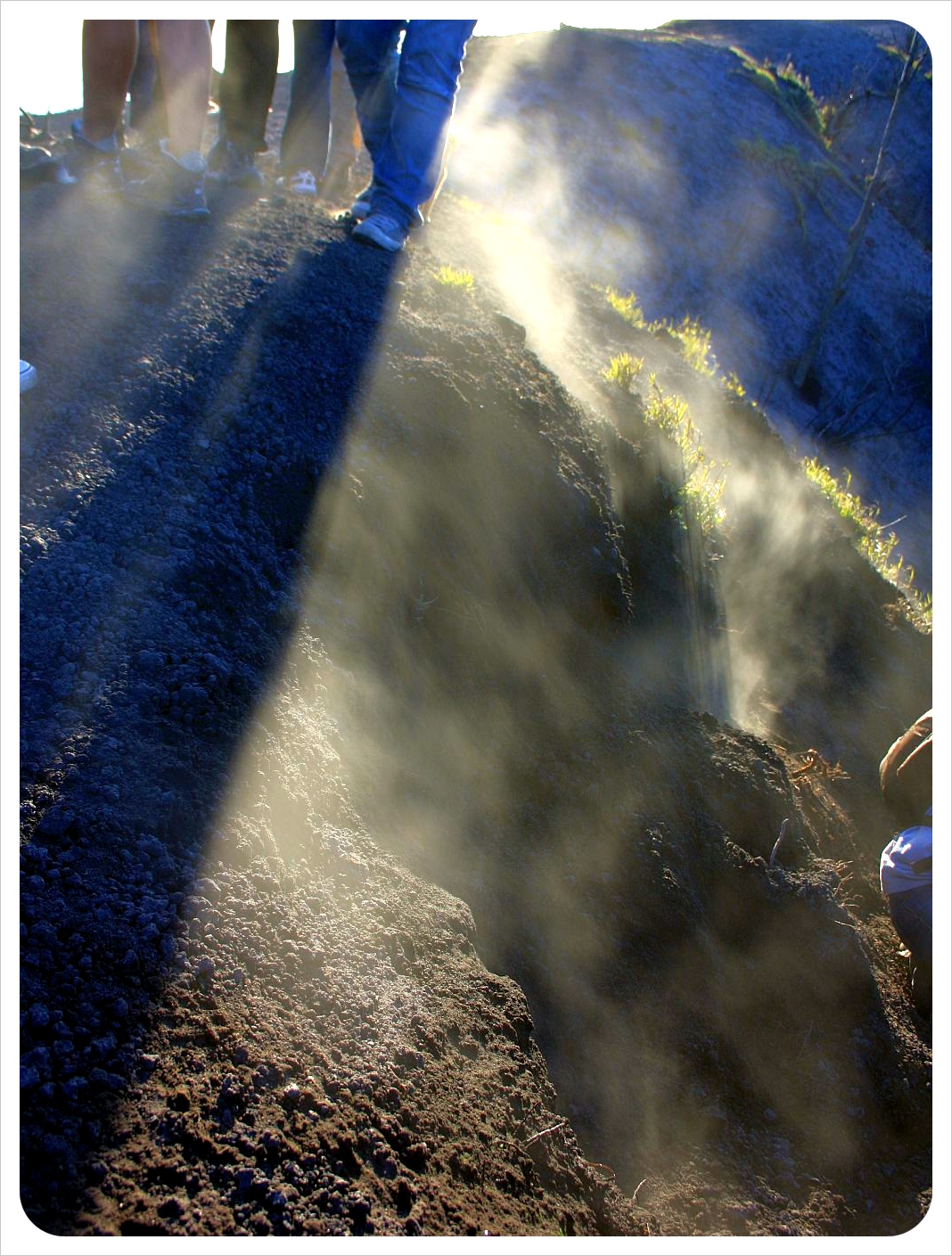 Finally on Pacaya, the hike leads directly into the sunset. The winds, which can be quite cold, are not very strong. Rough, sharp volcanic rocks crunch beneath our feet. Quite suddenly, the penetrating smell of sulfur invades my nose, and we reach a field of steaming soil. We have arrived at the summit.

We will not actually climb to the very top, an undertaking far too dangerous considering the volcano’s activity. Instead, as the setting sun dyes the clear sky pink and orange, our guide leads us to a two meter-wide gorge where we see glowing hot lava. He tosses a tree branch into the gap. It sets on fire immediately, before even falling in, from the heat of the lava below. This is a perfect spot to roast marshmallows, but I take a step back from the edge, just in case. As I do, the powerful heat pops the lens cap off my camera. It really is incredibly hot. 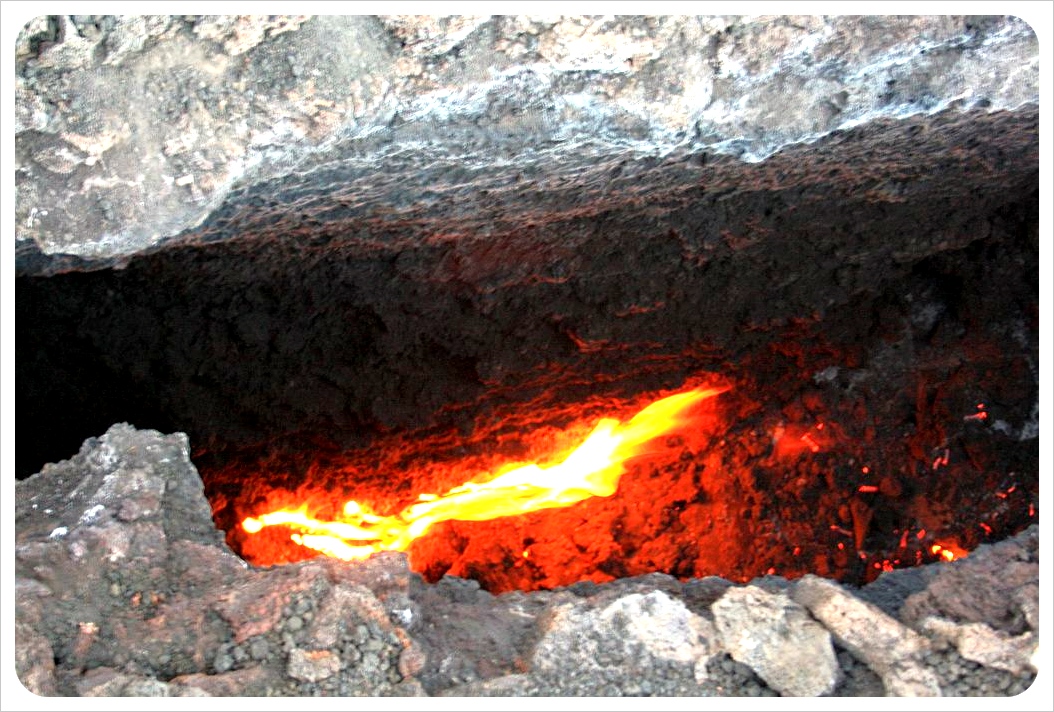 Heading to slightly higher and cooler ground, we sit down to take in the breathtaking views of the surrounding volcanoes in the changing light of the descending sun. Something about sitting on top of one myself makes me feel more in awe of the many other volcanoes around me.

Despite the steep uphill walk, the 90-minute hike did not feel strenuous, even for the less active members of the group. The way down, in the dark and on an unlit path, proves more of a challenge. Those with a flashlight are definitely better off, though my trusty walking stick saves me a few times from sliding down in the loose ash. As make our final descent back to the village, the kids swarm us again, and I give back the walking stick, feeling proud of my accomplishment. I watched the sunset at 2500m, next to the boiling hot lava and steaming soil of an active volcano, something I never expected of myself before the trip began.

When to go:
There are two guided climbs per day: one leaving Antigua at 6am, and one leaving at 2pm. The afternoon tour is usually the better one, as it brings you to the summit at sunset, whereas the morning tour reaches the top around lunch time, when it is mostly covered in clouds.

What to bring:
Wear proper hiking boots, not sandals. For afternoon climbers, bring a flashlight for the descent. Bring a jacket, water, sunglasses and a snack – Marshmallows can be toasted over the lava for some S’mores action.

Cost:
Guided tours from Antigua are around Q55 ($6.90), plus entrance to the national park Q50 ($6). Tours are available at every travel agency in Antigua but all feed in to only a few actual tours, so shop around for the best price.

If you want to book your hike before you arrive in Antigua, check out the tours above. Make sure to read some recent reviews before booking your Pacaya hike online – the quality of different tour operators varies drastically. 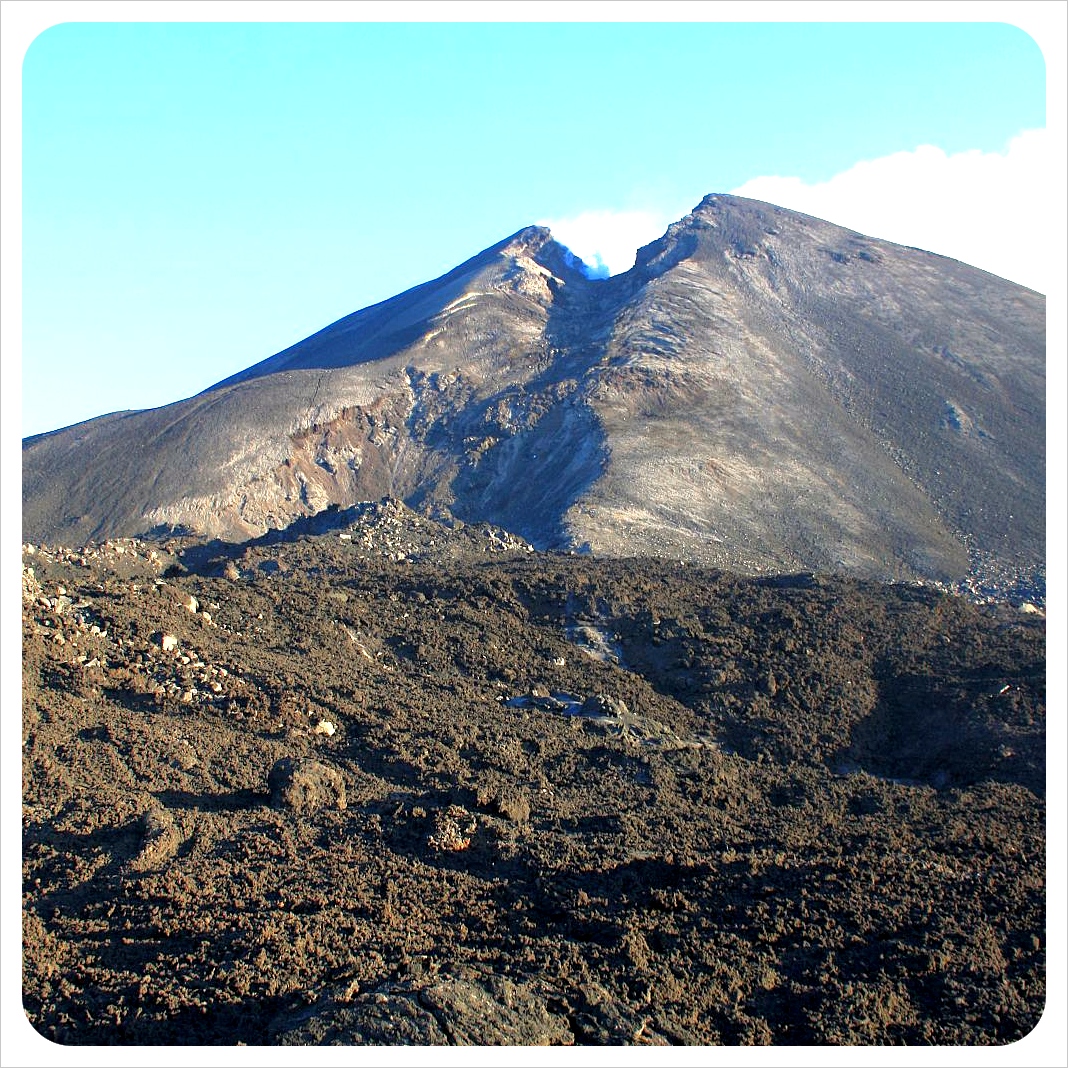 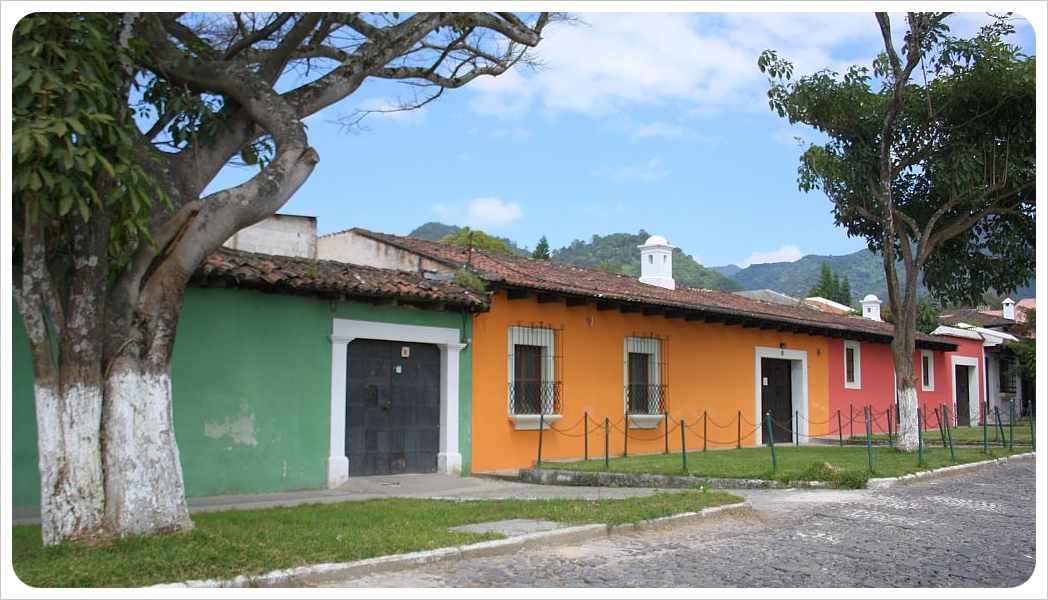 How to enjoy a trip to Atlantic City, NJ