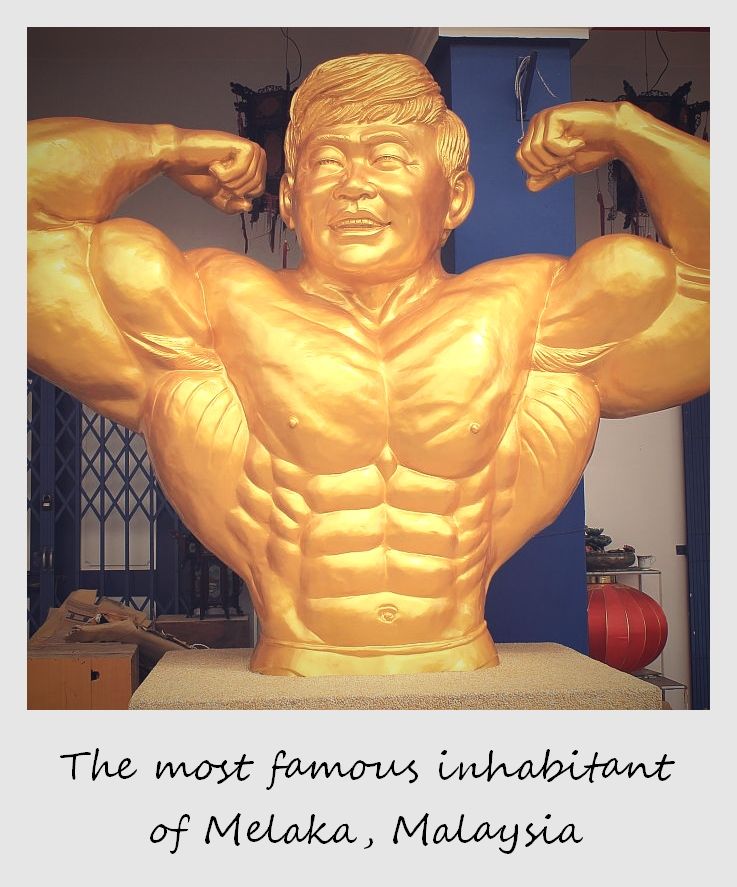 We returned to Malaysia for a few days last week, and finally visited Melaka. We expected a quaint little town with Chinese temples, relics of the colonization by the Dutch, Portuguese and the British, a few beautiful shophouses and tricycle rickshaws similar to the ones we loved in one of our favorite parts of Malaysia – Georgetown, Penang.

What we did not expect in this UNESCO World Heritage City were four (!) huge golden and bronze statues of a bodybuilder, who turned out to be the most famous person Melaka has produced: Datuk Wira Dr. Gan Boon Leong. Born in 1937, he is Malaysia’s the most successful bodybuilder – having won countless bodybuilding prizes, including Mr. Asia and even Mr. Universe. Also known as the ‘Father of Bodybuilding in Malaysia’,85 year old Datuk Wira is now, decades after finishing his career as a bodybuilder, a local politician, runs a gym in Melaka, and is President of the Malaysian Bodybuilding Federation. To honor everything the prominent athlete did for Melaka, the city erected several golden statues of him, which are now just as much photographed as Melaka’s more traditional tourist sights.

Polaroid of the week: Tea plantation in the Cameron Highlands, Malaysia
Click here to cancel reply.

HE WAS NOT MR. UNIVERSE ! YOU CAN'T FIND HIS NAME IN THE ALL TIME LIST . SINCE 1948 ALL MR. UNIVERSE ARE LISTED ON WIKIPEDIA... BUT THIS IS TYPICAL FOR TRAVELING IN ASIA !

[...] are now just as much photographed as Melaka’s more traditional tourist sights.” – Globetrotter Girls (Yes I copied and pasted…lol, cus I remember seeing this cute lil man on their blog months [...]

[...] in Southeast Asia (vagablogging.net) The Markets of Chiang Mai: A Photo Essay (technosyncratic.com) The most famous man in Melaka, Malaysia (globetrottergirls.com) Am I Just a Stranger in a Strange Land Now? (nomadicmatt.com) 6 Travel [...]

Reg of The Spain Scoop

haha! He is definitely built!

For sure! There are at least three golden statues of him around town. Just not what we expected in this Portuguese colonial city!!

Thats very interesting! Never heard about this. Are you in India right now?

Hey Arti - we had never heard about this either. We are indeed in India right now, yes.