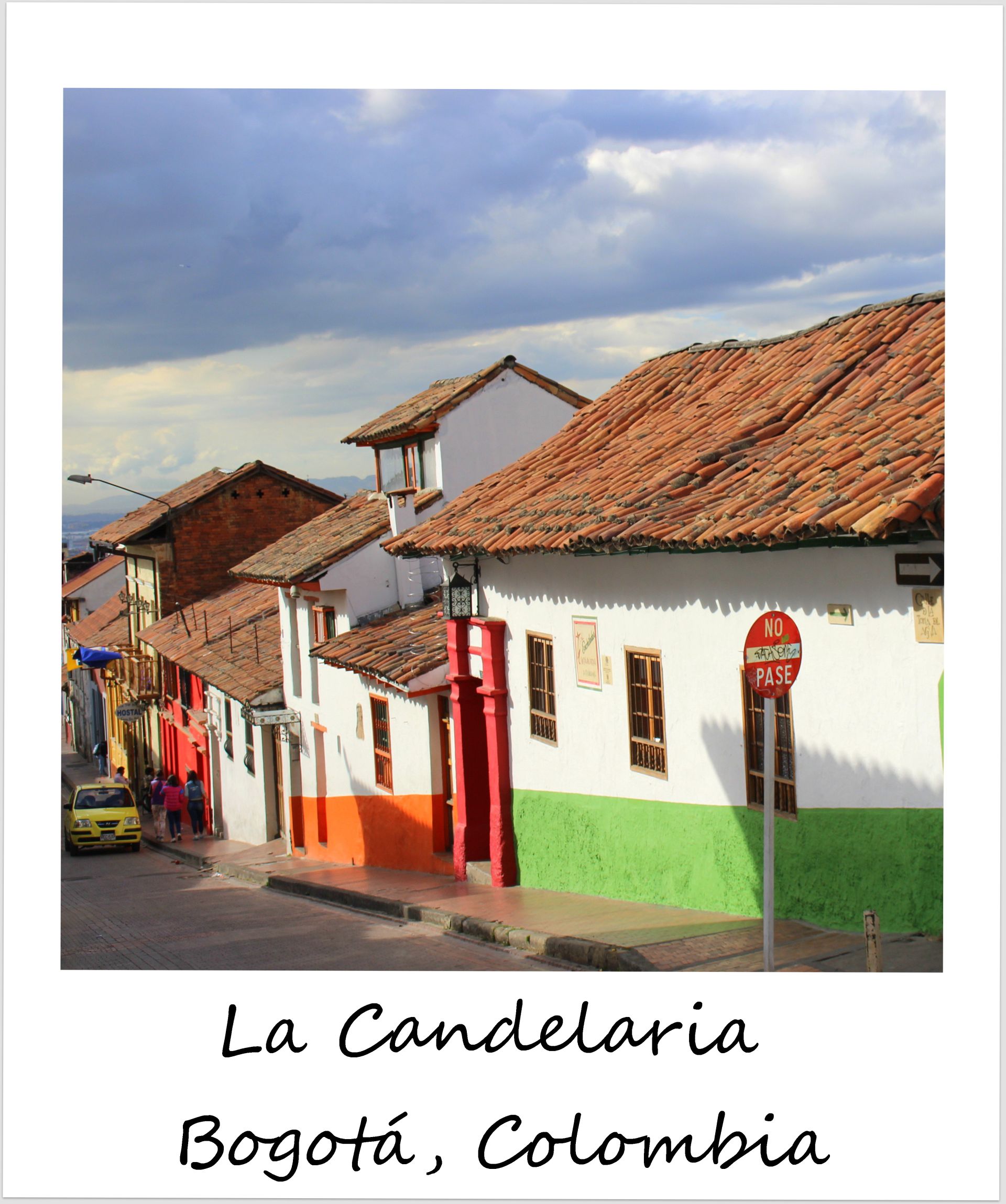 After over a month on Colombia’s hot and humid coastline, arriving in Bogotá, which sits in the mountains and is considerably cooler than Santa Marta, from where I was flying in, was a little shock to my system. I had heard mixed reviews about Bogotá – most travelers seemed to spend only a couple of days here before heading to more pleasant places, and stories of muggings and robberies made me feel a little uneasy at first. However, I was lucky enough to meet up with a travel buddy who’d spent quite some time in Bogotá and who knew the city well – including some great salsa bars and unassuming yet delicious vegetarian eateries.

I lost my preconceptions about Bogotá quickly, and after nearly a week here, I have to say that I don’t dislike the city at all, contrary to what I’d expected. A free walking tour through Bogota’s Spanish-colonial center, La Calendaria, including tidbits about life in Colombia, coffee culture, the history of Bogota and lots of interesting stories made it easier for me to understand the city, and a game of Tejo, during which you throw a metal puck at little paper triangles filled with gun powder, trying to cause a noisy explosion, plus a Chicha tasting (an indigenous fermented corn drink) were added bonuses of this tour. It me realize that this city was nowhere near as bad as some people had made it out to be.

Another thing Bogotá has going for it? Its thriving street art scene! As a huge fan of street art, I was blown away by the amount of murals all around town, and the talent of the local artists. And after my first taste of street art in Cartagena, I was excited to take another street art tour – this one much, much better than the one in Cartagena (which I’d also really enjoyed, just to show you how good this one was!) and I couldn’t put my camera down, that’s how much street art we got to see during the nearly 3-hour tour (which was also free, by the way).

While I preferred staying in the historic center, I made sure to base myself in another neighborhood as well to venture outside of La Candelaria. And so I treated myself to a weekend in Chapinero, a more upscale neighborhood with gourmet restaurants, bohemian bars and fancy hotels. El Chapinero is also home to Bogotá’s gay scene, with several bars, and El Theatron, the largest gay club in all of South America! I’ll tell you all about my adventures in Bogotá soon, but for now, I’ll keep exploring the city – I just extended my stay here, that’s how much I’ve been enjoying Colombia’s massive capital. Where to stay in Bogota: The Hilton
Click here to cancel reply.

[…] Leyva, a beautiful little town in the mountains. After that, we returned to Bogota, and I ended up extending my stay there after enjoying it much more than expected. And because I decided on a whim to meet a friend in the […]

You need time to appreciate the capital. And tours are a great opportunity to learn more about the history and the culture of Bogota! The first time, I didn't like it. I'm not a big fan of Candelaria at night. But then I had the opportunity to come back 3 times. And it was a lot funnier. Chapinero is a lovely district, and there are many restaurants and bars to try! And you can still get out of the city with a day tour to Sumapaz, Chingaza or Guatavita :)

Hi Dani, I'm heading to Cartagena and Bogota next week and was wondering if you could recommend a few vegetarian places that you enjoyed during your time there? Thanks! -Jen

Hi Jen, in Cartagena head to Girasoles - awesome lunch deals and super cheap (I think 8,000 for lunch). La Mulata has a great vegetarian dish (daily changing) but it's where I got food poisoning. As much as I loved my food there, I am hesitant to recommend it. I also found some great veggie options at Cafe Lunatico and Gato Negro (breakfast) in Getsemani. In Bogota, I used Foursquare to find veggie places and there were some unassuming ones near Candelaria, Loto Azul was one of them (okay food but I wasn't blown away). Quinua y Amaranto is the most popular one in Candelaria, and I also had good food at Nativo Arte y Comida Natural..both places are on Foursquare. Enjoy Cartagena and Bogota :)

Very cool, Dani! I've been waiting to hear what you think of Bogota and good to know that the city surprises you in a very pleasant way. I'll know to pounce on a cheap flight next time I see one!

I was terrified to go to Bogota! I'd heard too many horror stories. But I never felt unsafe. It's so weird how sometimes the picture you have of a city doesn't resemble at all what it's really like!