Polaroid of the Week Singapore by on 18 comments 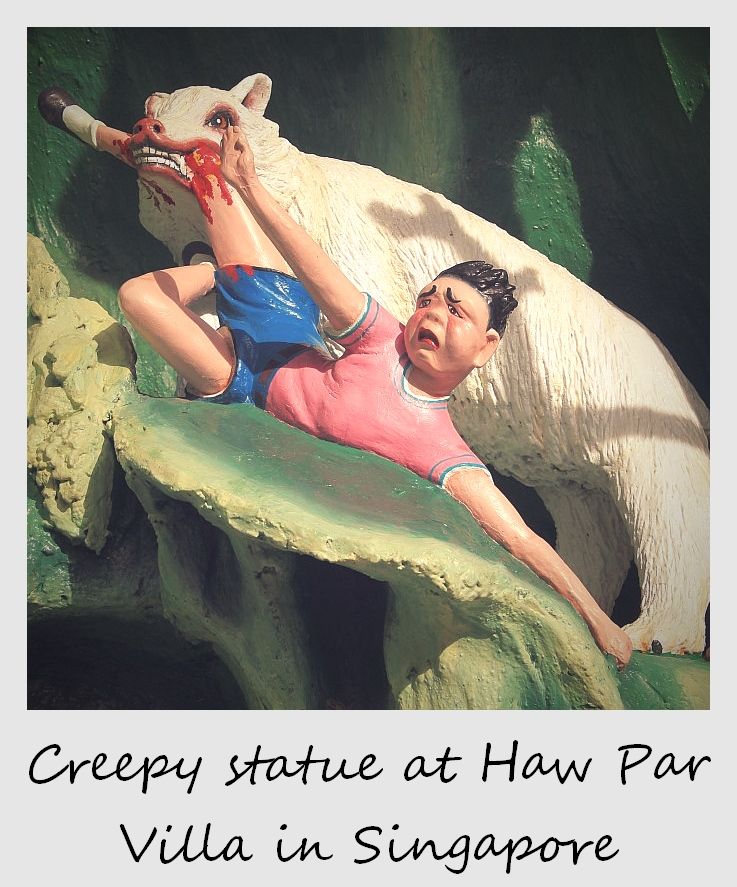 Haw Par Villa was definitely one of the more bizarre sights we have visited during our travels and is hands down definitely the oddest attraction in Singapore (if not in all of South East Asia!)

Built in 1973 by the millionaire brothers who started the Tiger Balm brand, the ‘villa’ features over 1,000 statues depicting Chinese folklore, history and mythology. These brothers were not afraid to get graphic with it, either!  Opened as Tiger Balm Gardens, this was supposed to teach traditional Chinese values. Back in the day, Tiger Balm Gardens was a popular tourist destination with regular theater plays and puppet shows, but today it’s just a strange, strange shadow of its former self.

If you follow us on Facebook, you might have already seen the weirdest statue we came across there – a grandpa milking on a woman’s breast (apparently her father in law!).  But there were so many more statues that left us confused… rats with their feet cut off and bleeding stumps, a pig in underwear, armed monkeys, turtles riding on the back of ostriches, and then there were the elaborate scenes of the 10 courts of hell.  This showed cruel images of people downing in the pits of hell, sawed in half, and being stoned with big rocks. Familiar with Chinese mythology? Then maybe these scenes make sense. As for us – we left pretty confused, and wondering what the parents were explaining to all the kids we saw there.

Have a look through our Flickr photo album for more of the crazy statues at the Haw Par Villa – and let us know your thoughts in the comments below!