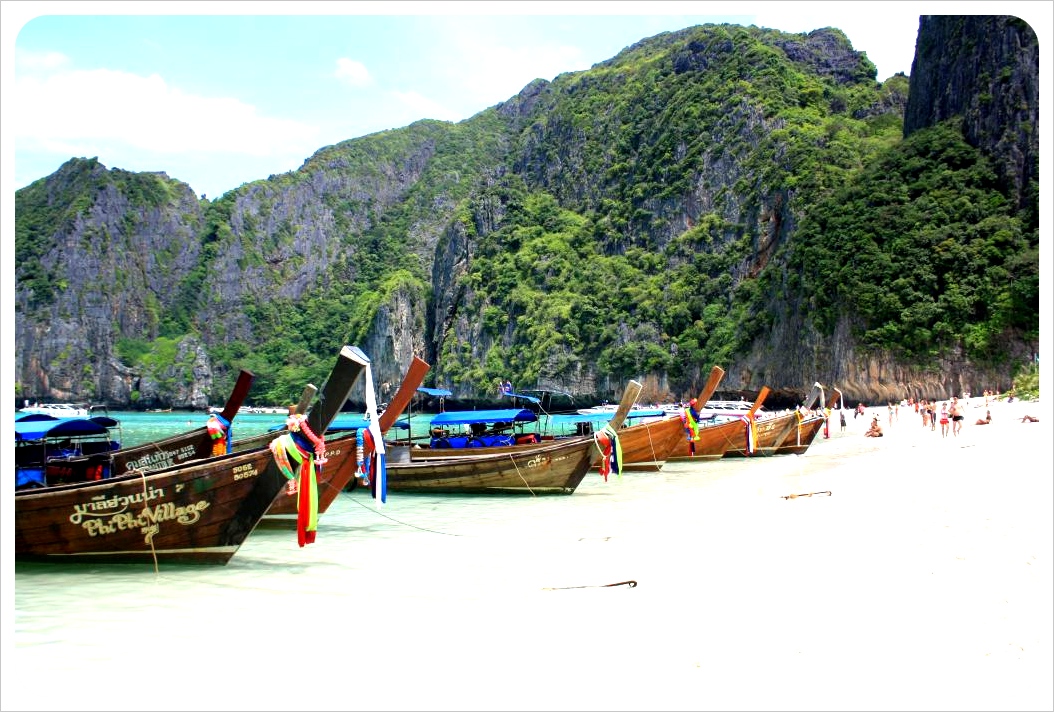 .“You hope, and you dream. But you never believe that something’s gonna happen for you. Not like it does in the movies. And when it actually does, you want it to feel different, more visceral, more real.” Richard, The Beach

Visiting the beach, or rather The Beach was a must for us while we were in Thailand. Few movies/books have played such a role in our wanderlust as Alex Garland’s novel-turned-Leonardo DiCaprio blockbuster The Beach. So we couldn’t have been more excited to see that jaw-droppingly gorgeous, secluded Maya Bay in person. It turns out, we almost wish we didn’t come here at all.

Look, we know that the scenery is truly breathtaking, and some people looking at the images might say they would give an arm or a leg to spend time in surroundings like these…We get that. Read on for why we found the situation to be pretty ugly… 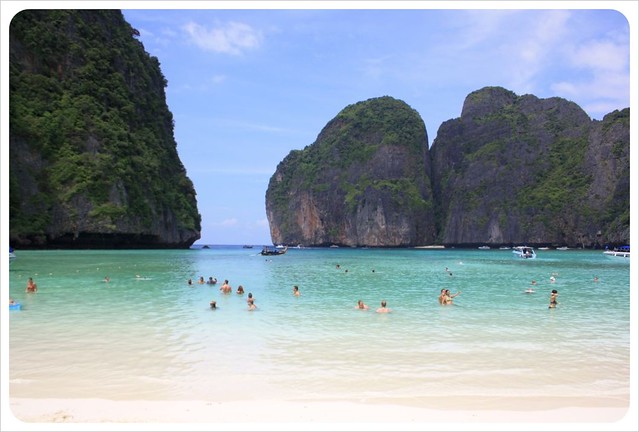 After disembarking from our ferry from Koh Lanta, we weaved our way through the narrow streets of Koh Phi Phi, which, rather than any sort of tropical paradise, was cluttered with cheap hostels, overpriced guest houses, souvenir shops, dive shops, internet cafes, tour agencies and western/westernized restaurants. Where were all the Thais? And while we’re at it – where was anyone over 30? This isn’t what our experience was supposed to be like. 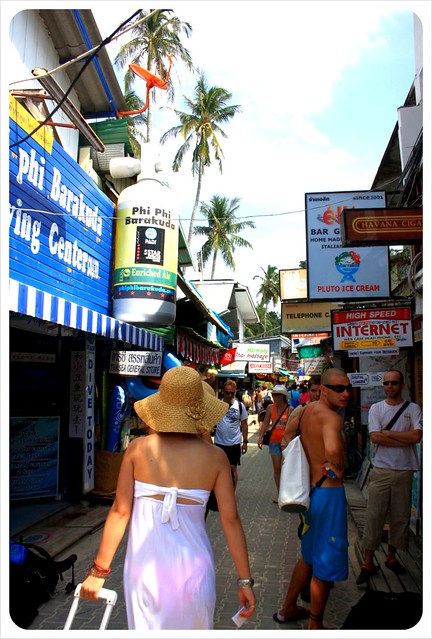 We’re not entirely naive. We came over on a ferry with at least 200 people, so we knew that Koh Phi Phi and Phi Phi Lei were not exactly undiscovered. 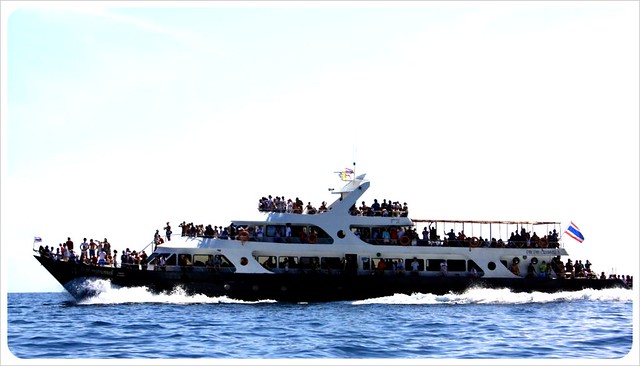 But at least a small part of us both had hoped for at least a touch of the romanticism and escapism to remain on Phi Phi Lei, the tiny island where the actual film location is set. In the book, The Beach, Garland describes the hand-drawn map discovered in a cheap hostel in the backpacker ghetto in Khao San Road, Bangkok:

‘The island’s perimeters were drawn in green biro and little blue pencil waves bobbed in the sea. A compass sat in the top-right-hand corner, carefully segmented into sixteen points, each with an arrow tip and appropriate bearing. At the top of the map it read ‘Gulf of Thailand’ in thick red marker. A thinner red pen had been used for the islands’ names. Then, on one of a cluster of small islands I noticed a black mark. An X mark. I looked closer. Written underneath in tiny letters was the word ‘Beach’.’

Now here we were on nearby Koh Phi Phi, experiencing the polar opposite of the description above. Dozens of travel agencies were ready to sell us tickets to boat tours to Maya Bay, posters with Leonardo DiCaprio’s face plastered on them urging us to experience ‘The Beach’. But damn it we had made the decision to come here, and committed to seeing what The Beach looked like in real life so we booked a snorkeling tour around Phi Phi Lei, which included a mandatory stop at Maya Bay. 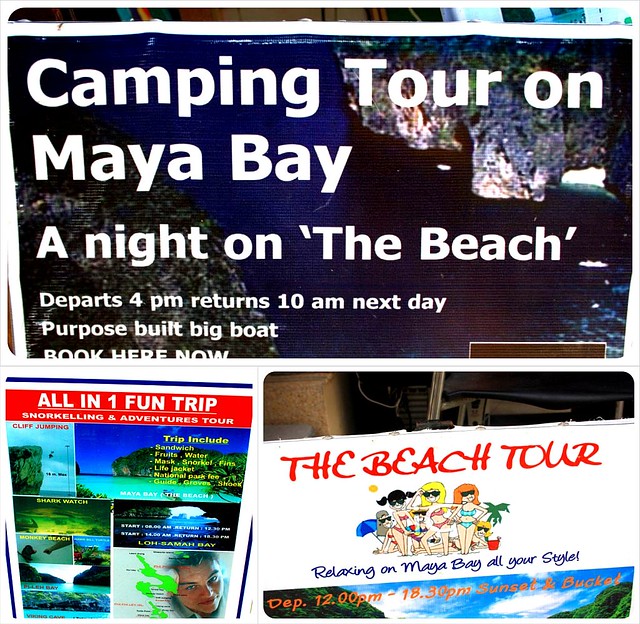 The first stop on our tour was Monkey Beach – one of the most disgusting real-life example of apathetic animal abuse either of us have ever seen. The beach is inhabited solely by monkeys, who, upon seeing our ramshackle wooden boat arrive, sprinted and jumped on board. Instead of some fresh fruit or other monkey-friendly food, our soulless tour guide opened up a bag of chips and starts tossing them over the side of the boat one by one to get these extras from Outbreak off our boat. 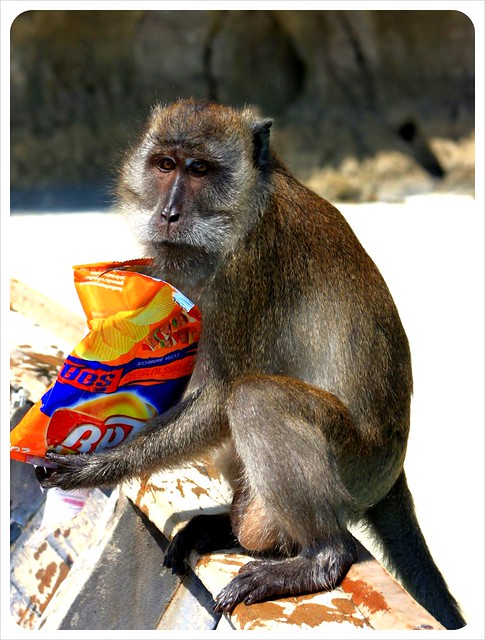 The guide threw the empty bag right onto the beach, leaving it for the trans-fat addicted monkeys to tear apart. Some people had jumped off into the water to feed the monkeys as well, and one man, let’s call him Big Fat Foreigner, complained of a monkey bite as he got back on the boat. Ah, yes, Monkey Bite, said the guide. 35 people got bit yesterday, too.

All we could think was – thanks for the warning, buddy. 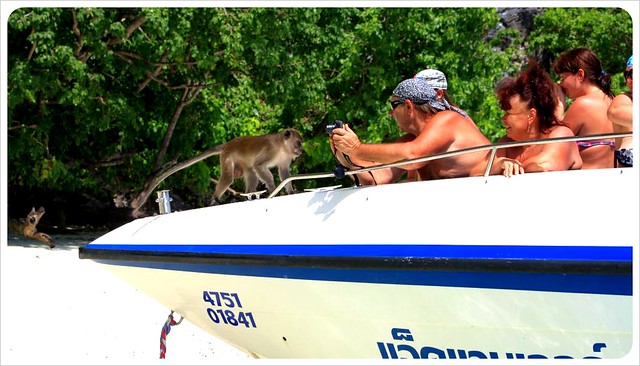 So now that our hearts have sunk into our stomachs, we were unenthusiastic about the snorkeling stop that came next – and we would stay that way when we saw over 20 boats lined up in traffic – yes, actual traffic, in the main snorkeling areas. The water smelled of gasoline, a Chinese tourist on our boat thought nothing of throwing his empty pack of cigarettes in the water, and though we saw small schools of tropical fish, the coral was barely surviving. 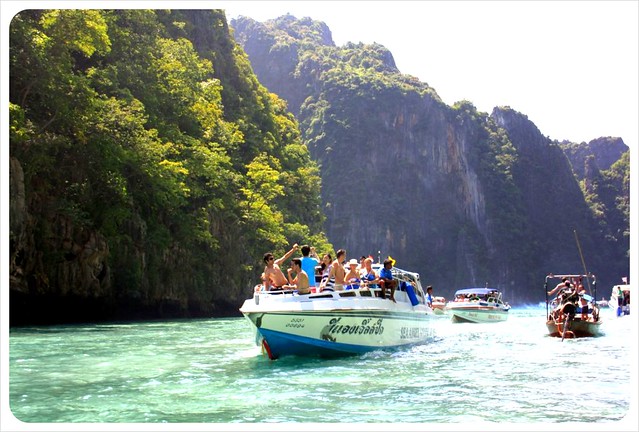 Finally, already entirely disenchanted, we arrived in Maya Bay. Those who know the film may remember that The Beach was closed off to the ocean by massive rock formations around the bay, and it was entirely isolated. In reality, that closed off feeling can only be seen from one specific angle, otherwise it is completely open to the ocean. And anyway, speedboats and mini-yachts lined up on side of the beach, long-tail boats on the other. 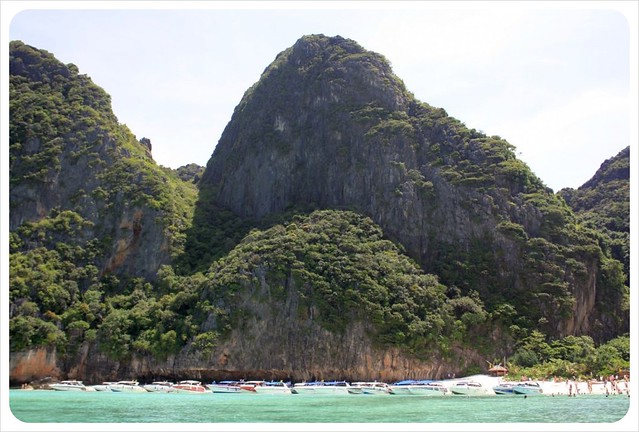 All together, the boats took up two-thirds of the shore, leaving hundreds of tourists to float in the remaining stretches of warm, knee-deep water. Rather than that idyllic white sand beach where Leo and friends played beach volleyball, or where the Swedes emerged from the water trailing gallons of blood after that infamous shark bite, this beach resembled more Spain’s Costa del Sol in the summer. We were given an hour to mull about, take pictures, buy ice cream and gawk at the hundreds and hundreds of tourists – undoubtedly fans of the film or the book. 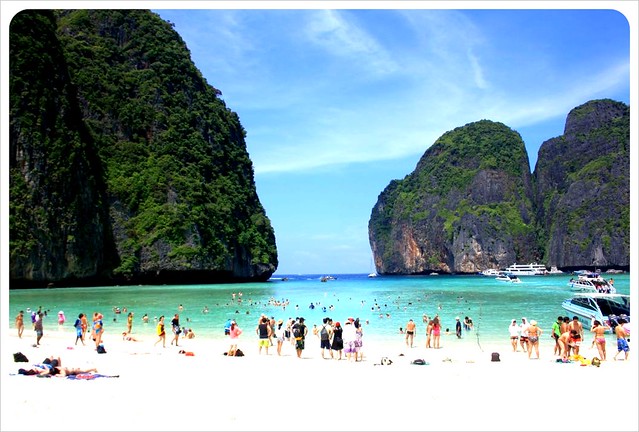 Not that we place any blame on the author Alex Garland. After all, he places the island in the Gulf of Thailand, not the Andaman Sea. The location scout who discovered Phi Phi Lei isn’t to blame either – he did his job amazingly well. This was the perfect location for the film (and yes, we know that these pictures reveal stunning sights. We’re not trying to sound spoiled here, it was just the antithesis of the romantic notions of travel in the book/film). 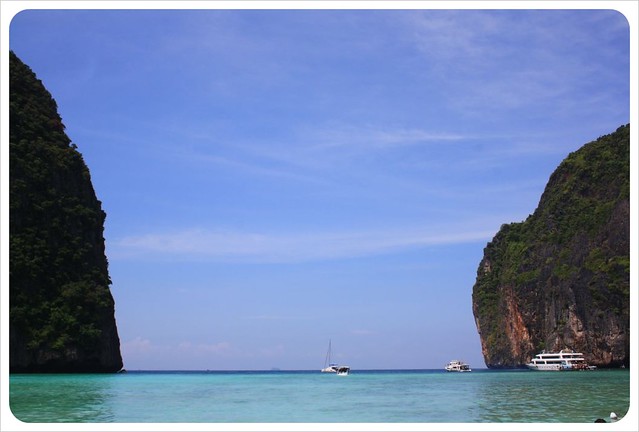 To be fair, there is no single person, no agency, no one to blame for the overrun beaches, polluted water and unhealthy monkeys. When tourism opportunities spring up for newly popular destinations, individuals jump at the chance to maximize profits and run successful businesses. We just hope that lessons have been learned from this and that in similar situations in the future, sustainable tourism is fostered, encouraged or even made mandatory. We know that we have certainly learned a lesson out of all of this…don’t expect reality to match a work of fiction. 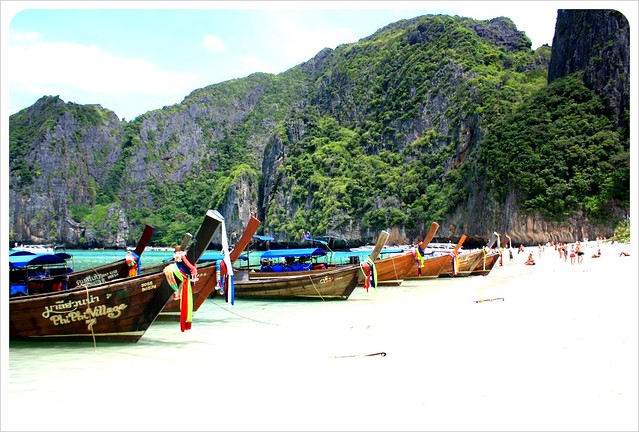 Have you been to Maya Bay, aka The Beach? What did you think?

Around the world in 4 boroughs: Six great ethnic restaurants in New York City

East or West From Faro

Hotel tip of the week: The Curtis in Denver, Colorado