When we were planning our trail through southern Chile into Patagonia, we found out that along the way we would pass through Chile’s Lake District, a region that was primarily settled by Germans and still boasts a huge German influence. When I read this, my interest was immediately sparked. After all, the former East German First Lady Margot Honecker resides in Santiago, but just how ‘German’ would Chile’s Lake District be?

Would there be blond-haired, blue-eyed children running around everywhere, and women in traditional German outfits serving big frothy steins of Hefeweizen in rustic wooden cabins? I never realized that chocolate and cake were something so typical for Germany, but we heard that there would be lots of exactly these two things. Since I haven’t been to Germany in almost two years, I was excited for this sweet little slice of ‘home’ in Chile, and to find out what drew German immigrants to Chile. 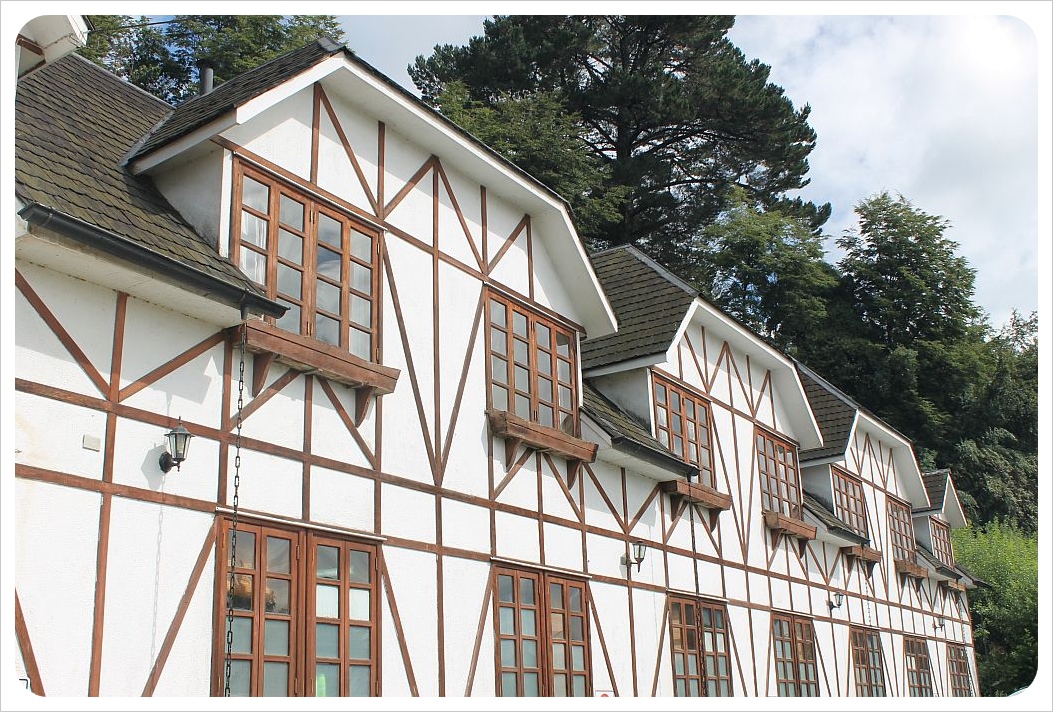 Our first stop in the Lake District was Puerto Varas, which we found described on Wikipedia as a ‘historical treasure of strong German features, with houses that have been declared cultural heritage, including the Sacred Heart Church, the Kuschel House, the German House, the Schwerter House and the Niklitschek House. 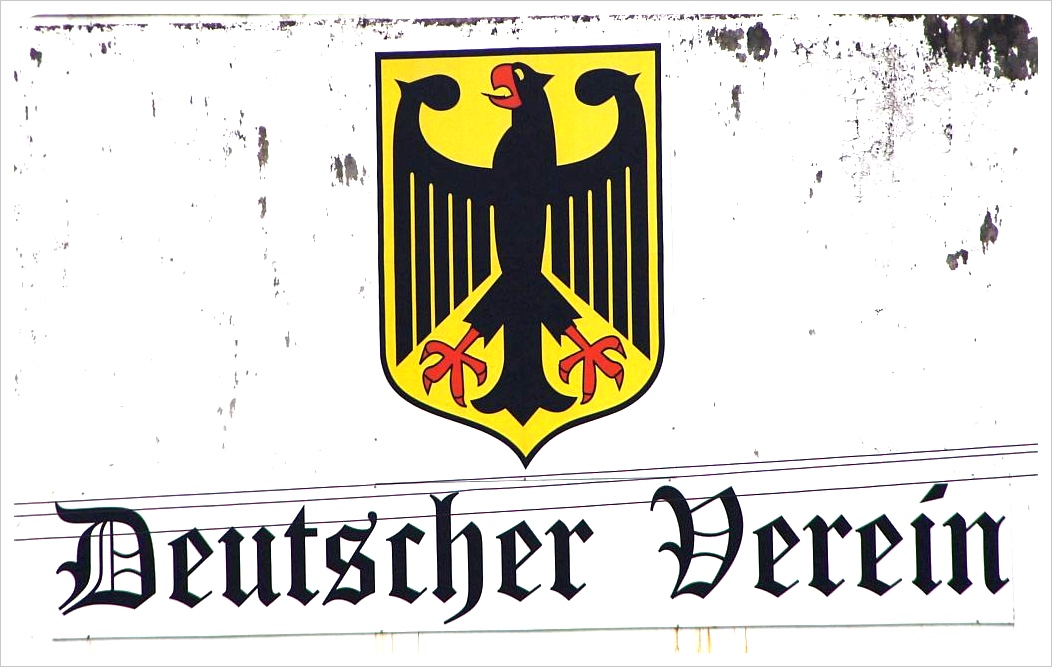 As soon as we arrived, I could feel the German-ness of the town all around me. I first noticed that the small wooden cabin type houses similar to those found in Bavaria were mixed in with the cement block structures typical in Chile. Puerto Varas is also situated on a lake, which actually reminded me of the Wolfgangsee in Austria, and to me, Puerto Varas resembles St Gilgen, a little village on that lake. 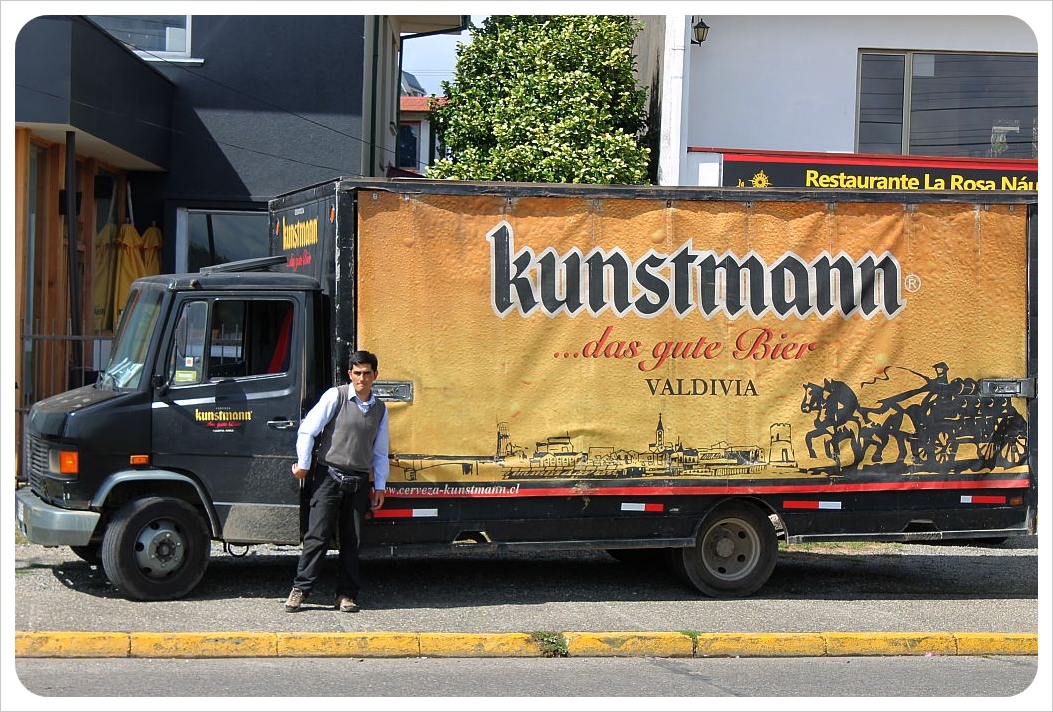 Germans have been living in this part of Chile since the mid-19th century when the Chilean government killed two birds with one stone by inviting over my ancestors, who were undergoing a fairly serious revolution at the time, and handing out free land that the government was desperate to develop. 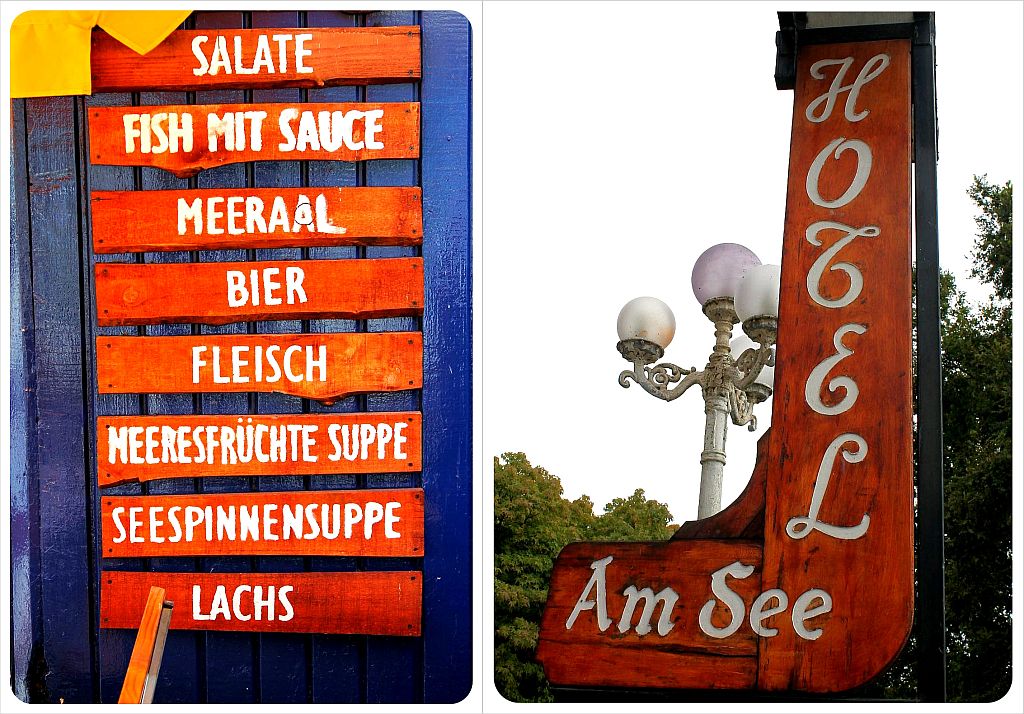 Signs for german food in Valdivia

We never learned about this mass exodus at school, but between 30,000 and 40,000 Germans settled in Chile at the time, crossing the ocean for weeks heading toward an unknown future.

Although today there is less blonde hair and only very few hints of German remaining in the language, German names of the original settlers can be found on plaques on the city’s grand buildings and on gravestones in the city cemetery: Beck, Bittner, Hoffmann, Gebauer, Klenner, Kuschel, Lückeheide, Minte, Mittesteiner, Müller, Nettig, Schminke, Schwabe, Schwalz, Strauch, Tampe, Vyhmeister, Von Bischoffshausen, among others. 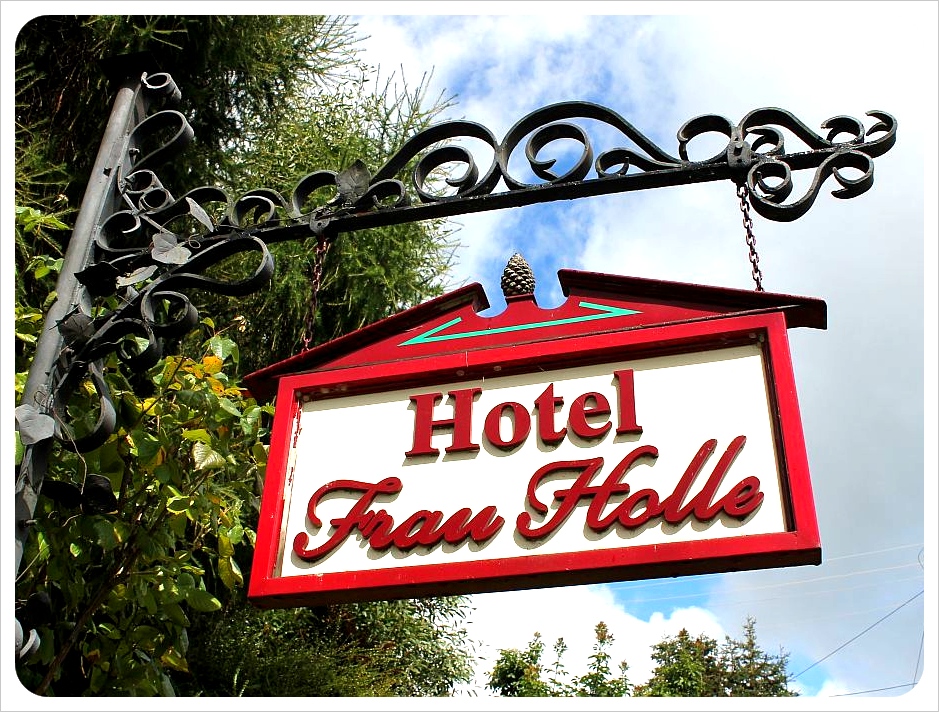 The only German I heard was from other German tourists, but there is one word that has truly stood the test of time: Kuchen, German for cake. Chileans have other words for cake, like torta or pastel, but they use the word ‘kuchen’ specifically for their most decadent, gorgeous cakes, which can be found in every café on every street in the Lake District. I was very happy to discover that this ‘kuchen’ is exactly like home, from multi-layered chocolate cakes to the flat cheesecakes piled high with glazed fresh fruits. 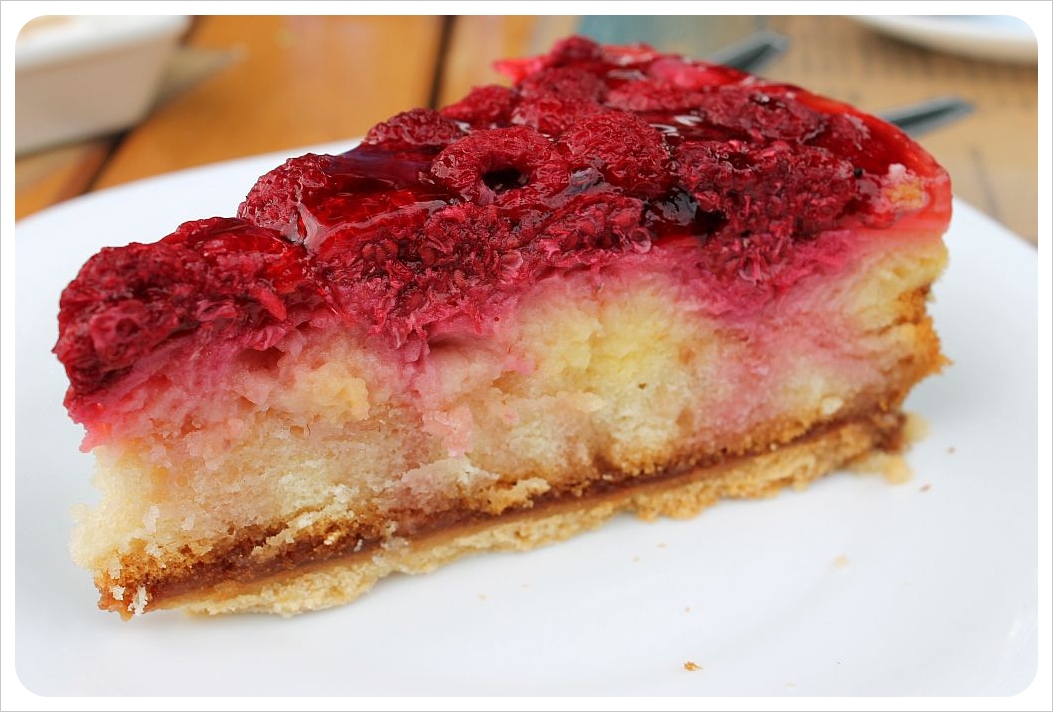 Still, I was not entirely satisfied, partially because of wild expectations I had after reading an article by this Chicago Tribune journalist who came here in 1989 and still found places like Fritsch`s hardware, the Shulz grocery, the Holck bakery, the Roller restaurant, the Gutenberg bookstore, Vyhmeister`s supermarket and Herr Streichholz`s unisex salon, which all seem to have disappeared since. 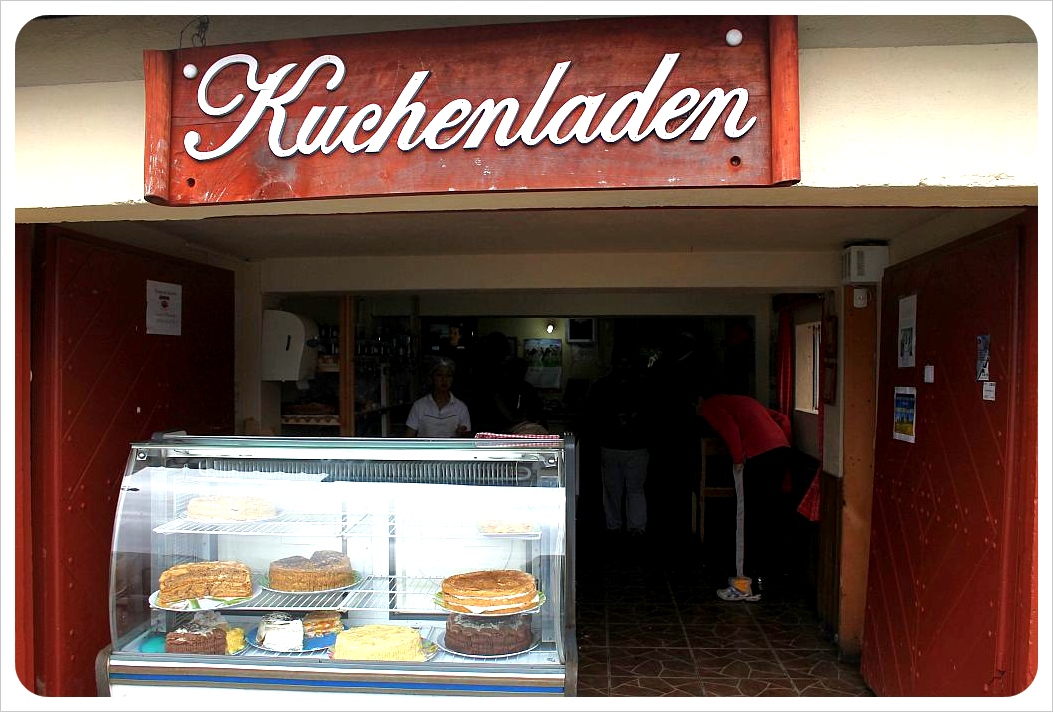 Our hostel owner told us all about a nearby town called Fruitillar, which is smaller and ‘even more German’ than Puerto Varas, he assured us. 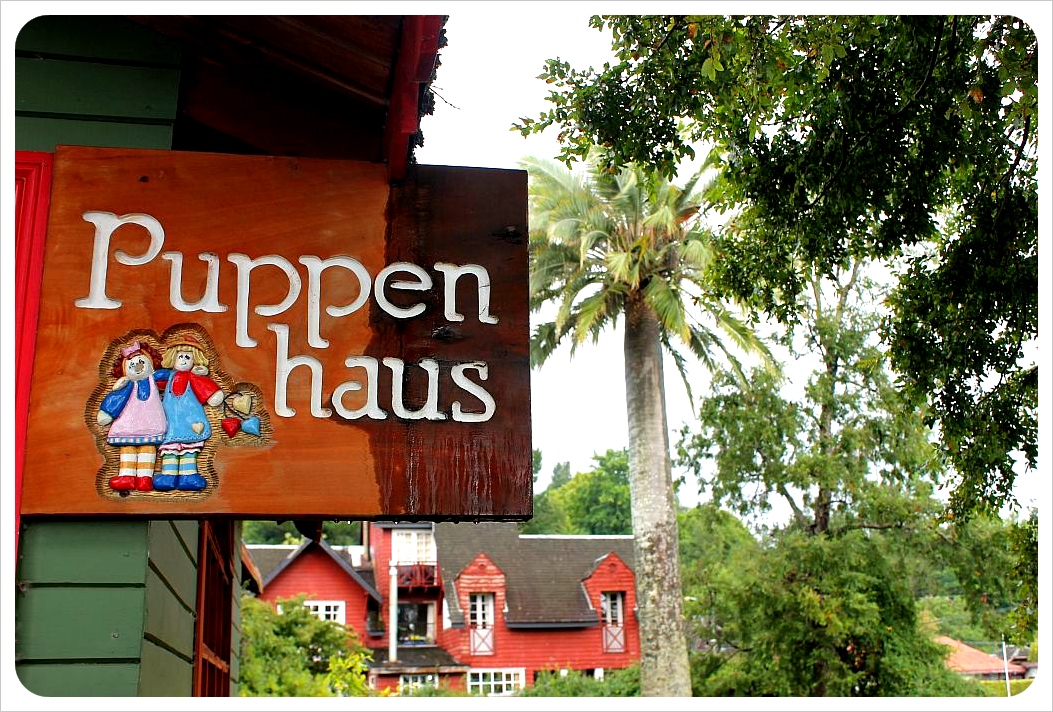 Though fairly lackluster, Frutillar truly could have been a town in Southern Germany. The main street, set on a beautiful volcanic lake, is completely lined with the wooden type of houses you find in many villages in Bavaria and lots of signs in German advertising the ‘Frau Holle Hotel’ (Mother Holle, a famous figure from a Brother Grimm fairytale), das Puppenhaus (Doll House) or das Kuchenhaus (Cake House).

I marveled at the kuchenes (Chileans have added their own plural ‘es’ to the German word, very cute) that all looked as if my grandma herself had made them. There is even a German Colonial museum with buildings furniture and machinery dating back to the second and third generation immigrants who quickly opened crop fields and incorporated and established their traditional German foods in the national market. 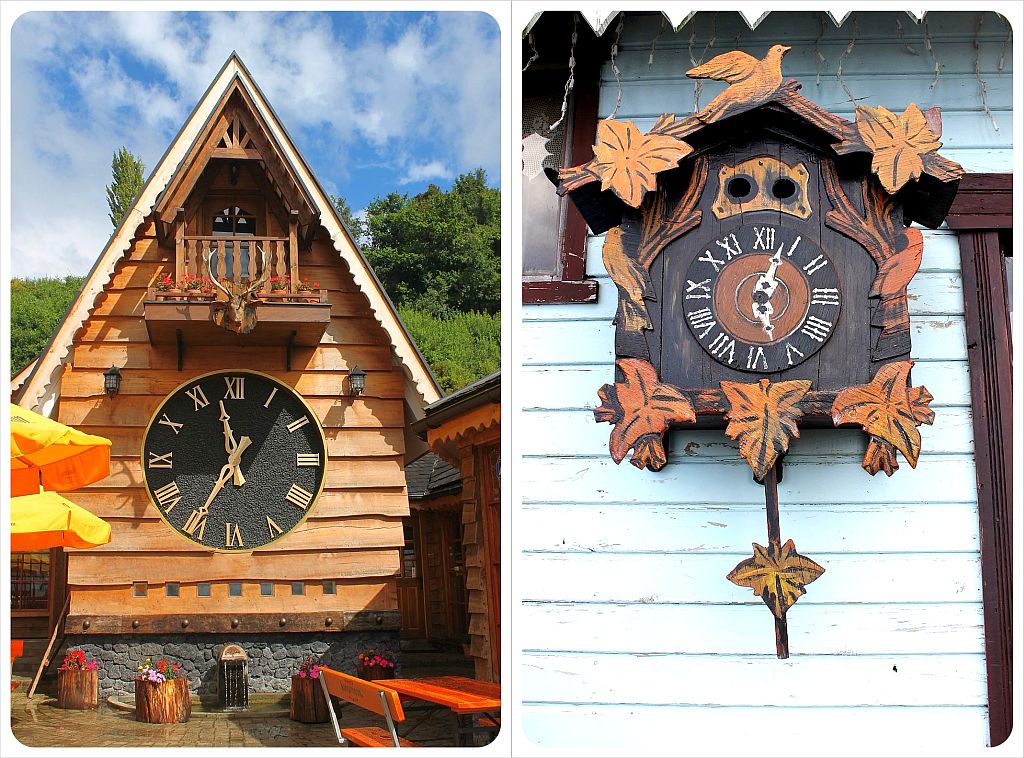 Even though the village is tiny, it makes for an enjoyable half-day trip, which consists entirely of coffee and kuchen. You could easily be transported from Chile to Germany, unless you look across Lake Llanquihue, where volcano Osorno sits, which would remind you that you are nowhere near Germany. Sadly the weather didn’t cooperate during our visit and we didn’t even see the base of this volcano ourselves. 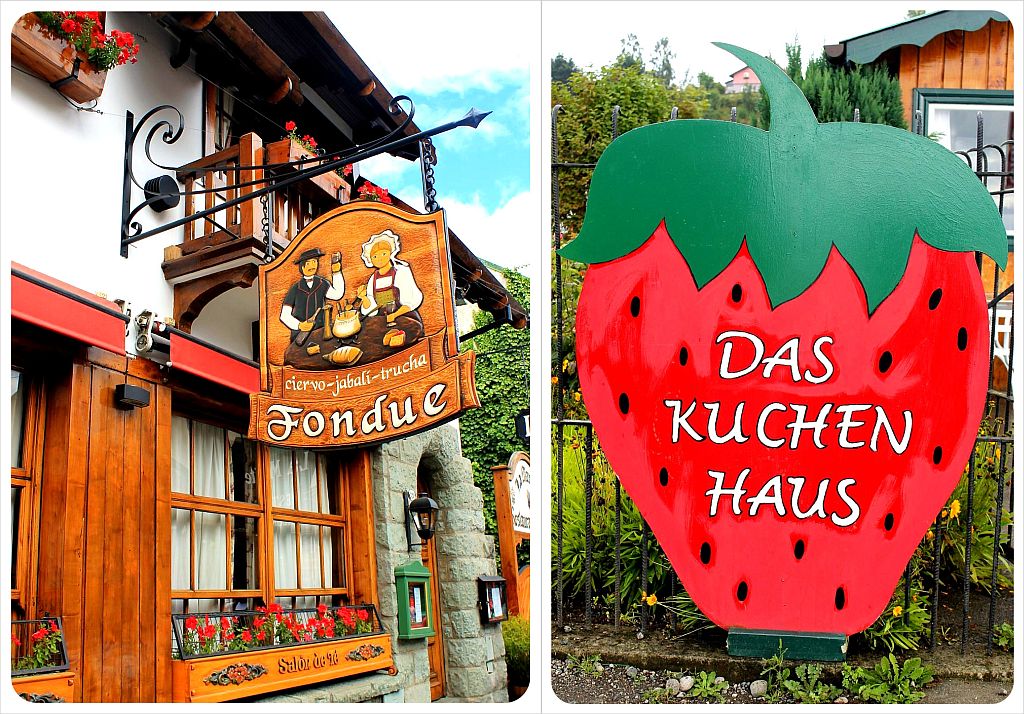 Fondue and Cake in Chile

A few days later, we were on the way over to Bariloche, Argentina, just a quick five-hour drive up and over the Andes mountains, wondering if as many Germans had settled in Argentina’s part of the Lake District. Would there still be cake? Would be able to still go for our afternoon coffee and kuchen, which had become a daily habit by then? 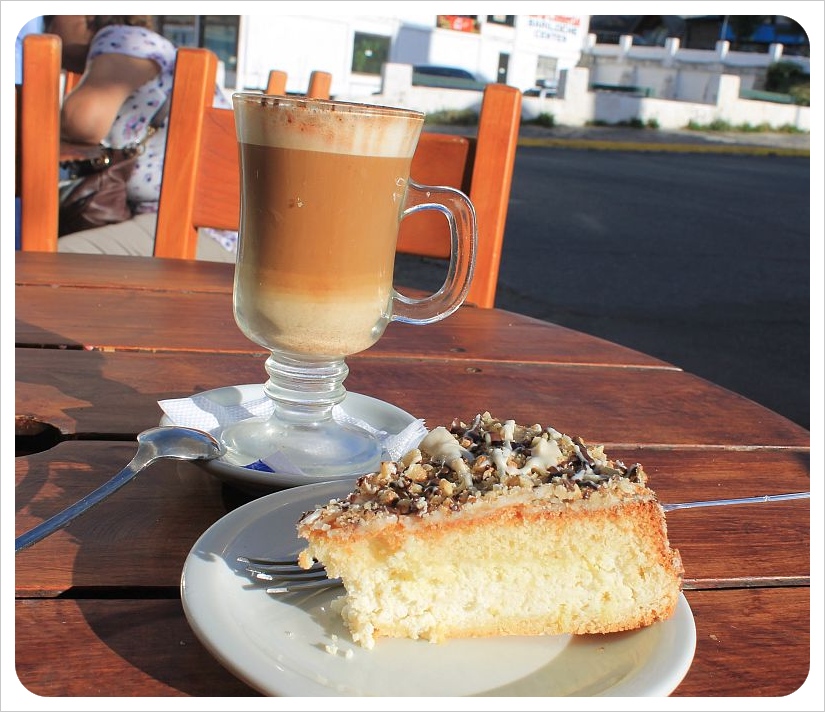 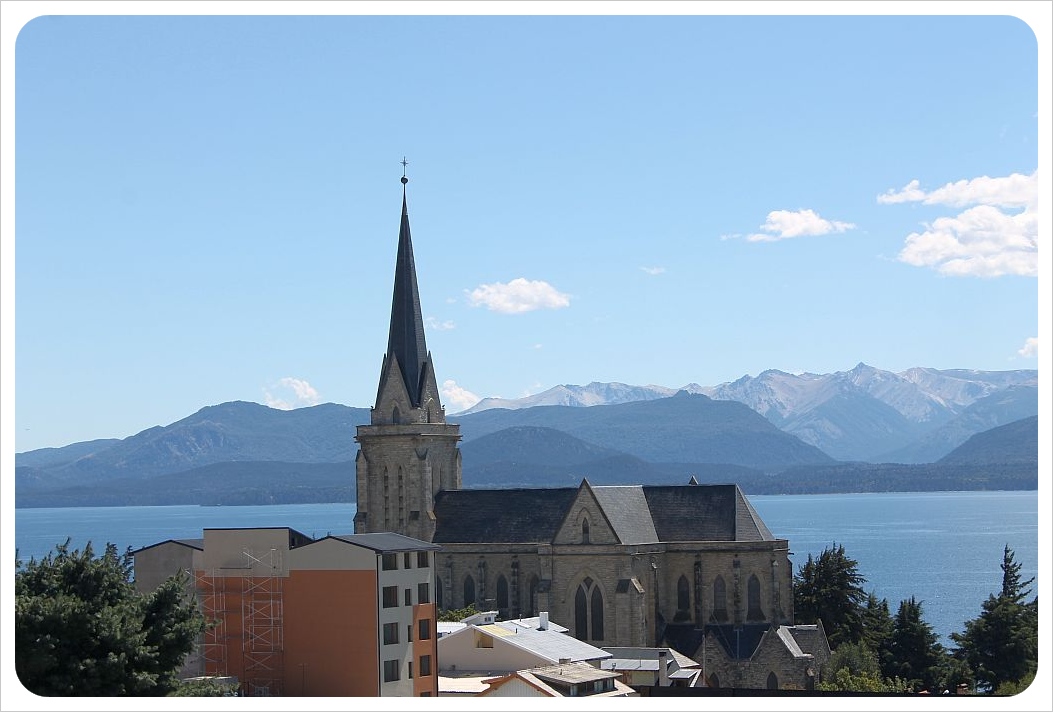 We quickly learned that the Germans had been just as fond of the Argentinean side of the Lake District as the Chilean side. A town surrounded by massive mountains and sparkling blue lakes, it didn’t surprise me that German immigrants felt at home in the region. Before we even saw any signs of Kuchen though, we spotted the tower of the neo-Gothic church jutting out from skyline of the city – a church that could be found anywhere in Germany.

However, a second wave of immigration in Bariloche’s history is a bit darker than that of the German immigrants in Chile. Many of the Germans who headed to Bariloche were escaping prison sentences in Germany, or worse. Several Nazi leaders fled Germany for Bariloche after World War II, avoiding the war trials happening in post-war Germany. They seem to have escaped their reputations for the most part, here in Bariloche. Erich Priebke, one of Hitler’s captains, who was responsible for the mass execution of 335 Italians in 1944, became the respected director of the German School of Bariloche and living as a free man in Argentina for fifty years until he finally was extradited in 1990. 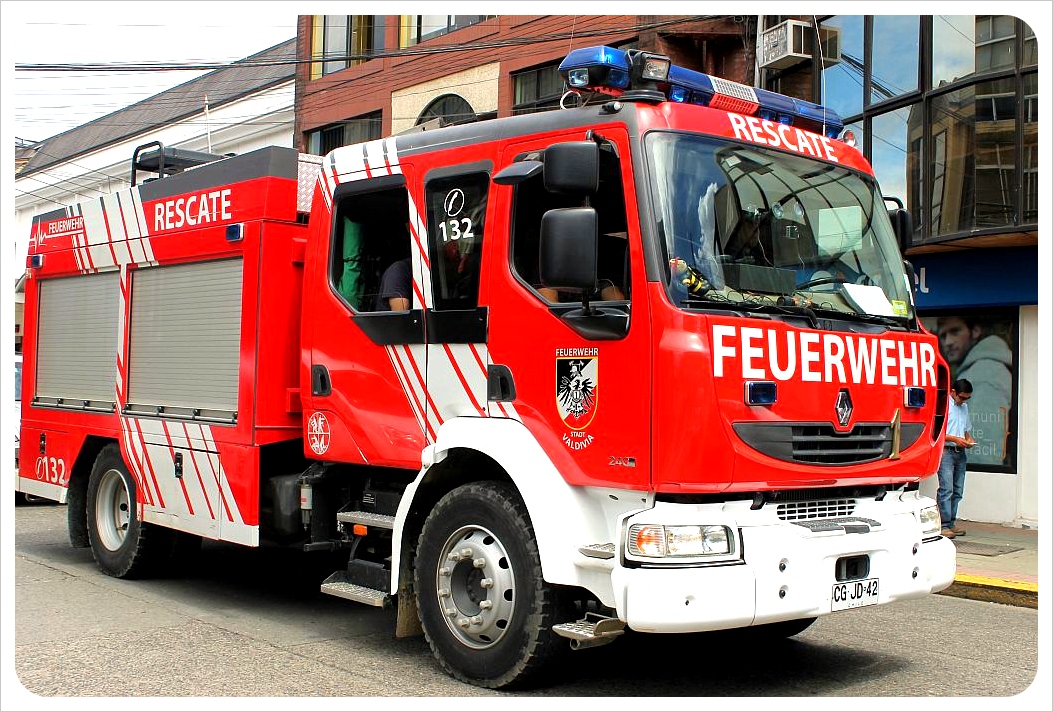 Today, Bariloche felt just as German / Swiss / Austrian as the towns in Chile’s Lake District, with several German-style breweries and brewery tours, so much ‘kuchen’ (though Argentines use the Spanish words for this) and most notably, chocolate.

Bariloche is so famous for its chocolate, this year the city won the award for the largest Easter egg in history – over 4 tons of chocolate. Although I have no idea of the final count on how many pieces of cake I managed to eat in the Lake District, let’s just say I am certain that I made up for the two years since I have been in Germany! 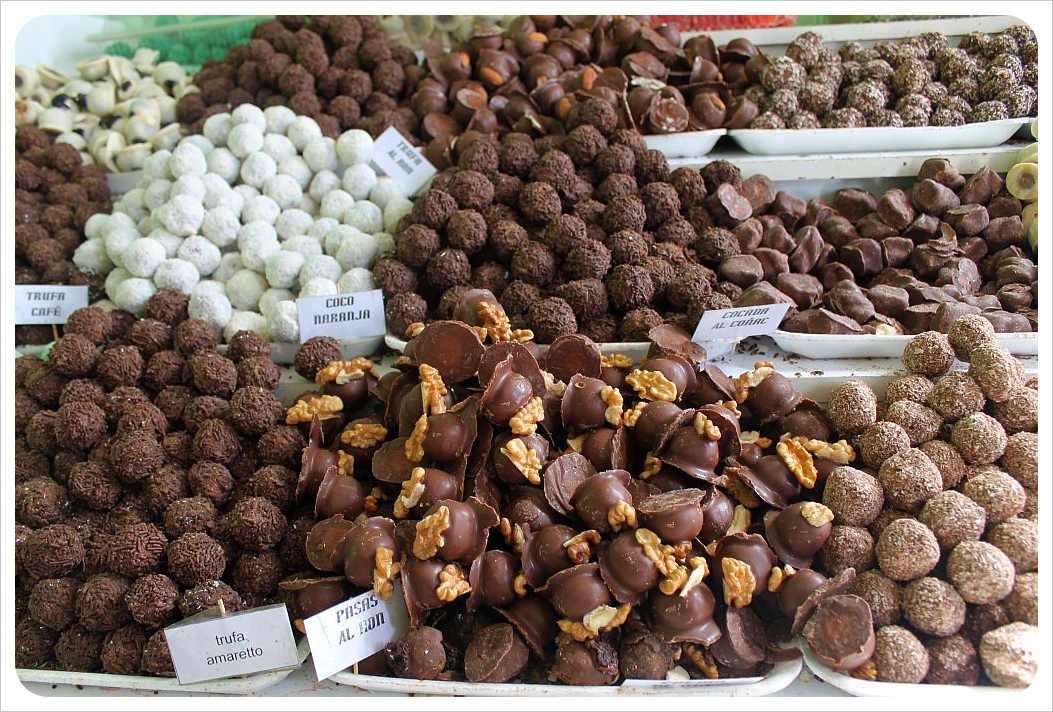 Chocolates for sale in Frutillar

Beer, chocolate and cake are some of my country’s great exports, but overall I felt like the German influence here was a bit superficial and overhyped. I was expecting our famous breads, not the many varieties of white, processed rolls, and where were the savory dishes like Spaetzle or Bratwurst? Especially in Argentina, the Italian influence, both culturally and gastronomically, is so much more prevalent: the hand gestures, the pasta and pizza dominating the restaurant scene, and the familiar tones and rhythms of Italian in their Spanish. 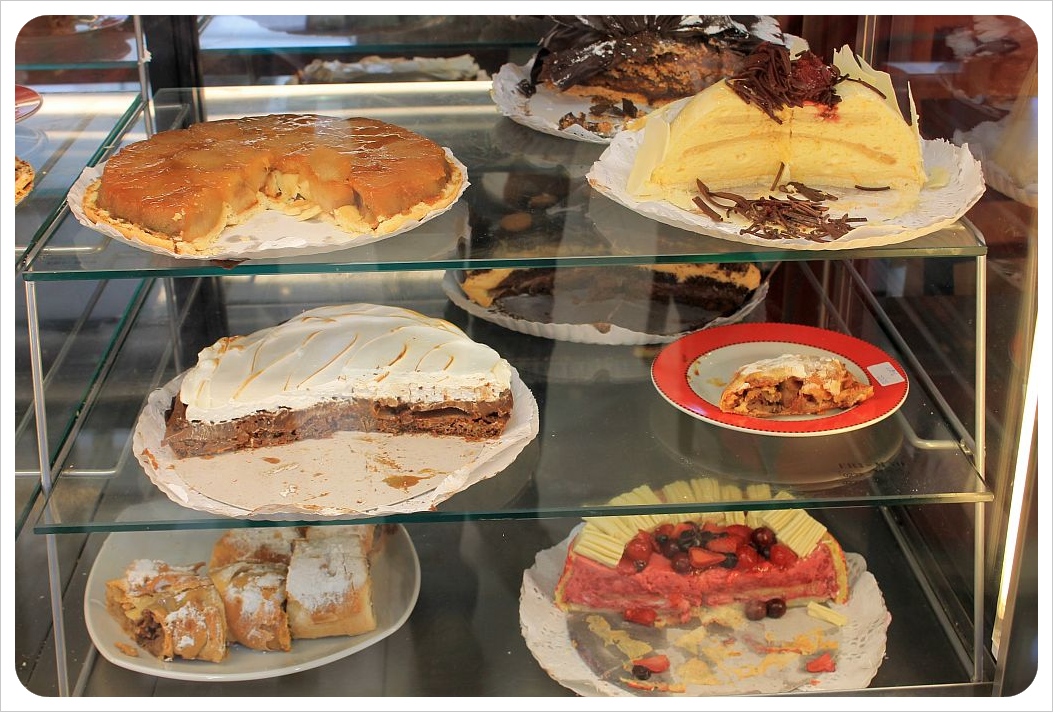 Nonetheless, it was interesting to follow in the footsteps of those Germans who had set out in search of a better life in Chile’s Lake District over one hundred years ago, and, with exception of Christmas markets in England and Chicago, I felt more at home here than anywhere outside of Germany. 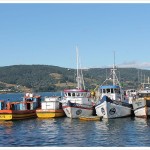 I studied Russian Language , literatures and East European history in college back in the 90's and that where I learned about the Germans of southern Chile and Paraguay . But I never knew it was a such a productive place . Your article is great to read . I learned something by doing so . Thanks !

Colonia Tovar in Venezuela is another piece of Germany to be found in South America. It was founded in the nineteenth century and its identity continues to prevail to this day.

[…] can grab one of the new, sturdy mountain bikes perfect for making the full-day cycle trip to the German town of Frutillar or other independent trips. Our three days in Puerto Varas were planned out within minutes thanks […]

[…] international food that Chile really seems to have gotten right was the Kuchen. That’s right, German cake. The Germans arrived to the Lake District en masse in the 19th century and their delicious cake […]

I agree that there really isn't much evidence of German culture in Bariloche. What there is is contrived, frankly. Visually, Bariloche could be Banff in Canada, which no one claims is German in cultural flavour.