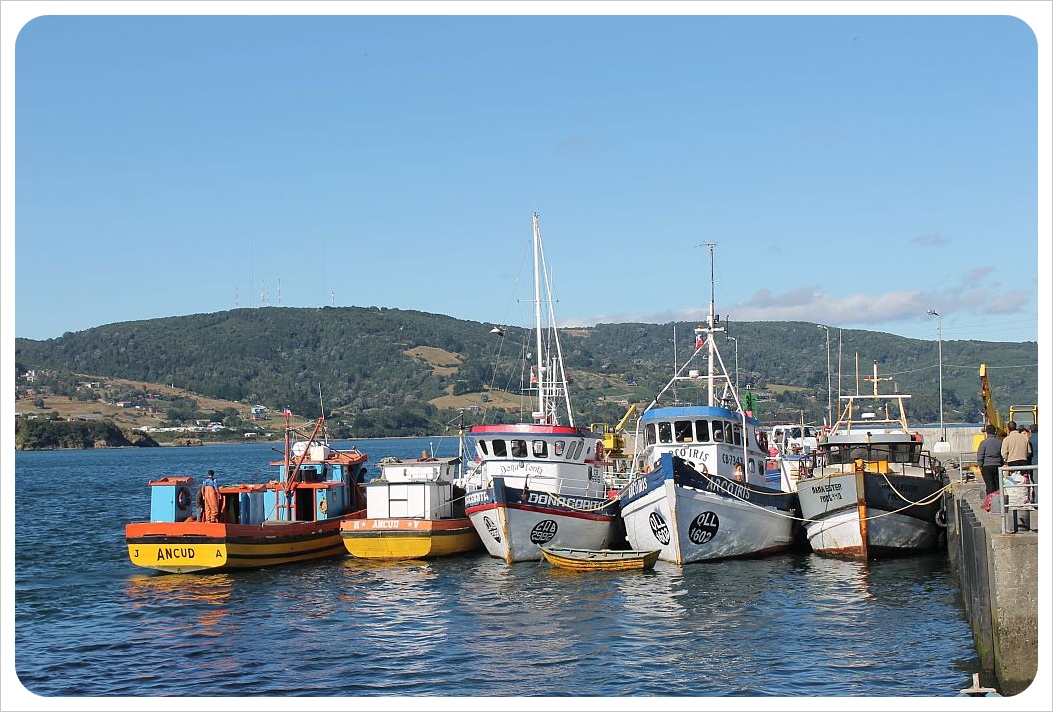 Less than a few weeks in to our Patagonian adventure, we were focused on planning our route through the rest of southern Chile and Argentina from our stop in Puerto Varas, Chile. As usual, it took only a two-line blurb in a guidebook about the island of Chiloe off the Pacific coast of Chile to immediately inspire us to make a detour to this mystical sounding island. Our next definite stop, however, would be Bariloche, which sits on the other side of the Andes mountains in Argentina, in order to continue southward through Patagonia.

Was a detour to an island we had never even heard of before that worth doubling back and tacking on more than a day’s travel in the opposite direction and back?

Chiloe Island sounded nothing like the rest of Chile; it is one of the country’s most remote regions, dotted with 15th century wooden churches now declared UNESCO world heritage sites, plus traditional fishing villages, untouched nature and a penguin colony, too. 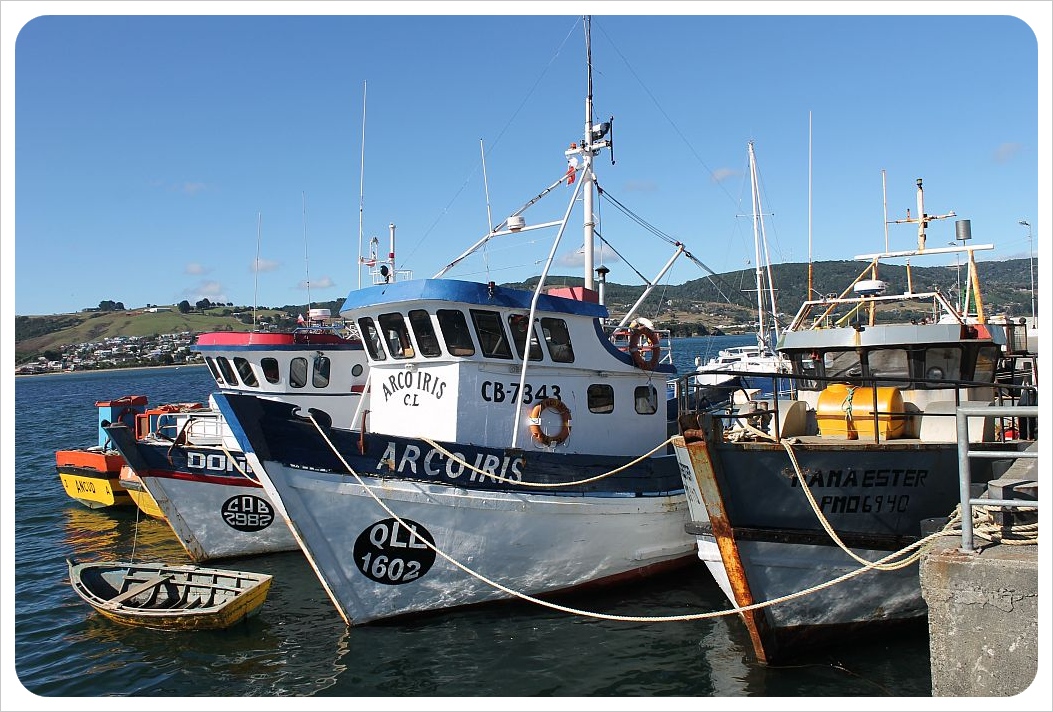 While we hemmed and hawed about whether to make the trip, the decision was actually made for us. A fellow blogging couple we had been in touch with online was on their way north along the same route we were heading south on, and the only logical place for us to meet in person was in Chiloé. We would have two blind dates in one – the first with Chile’s most indigenous island we knew very little about and the second with fellow bloggers and newbie digital nomads, Sam and Zab, of Indefinite Adventure. 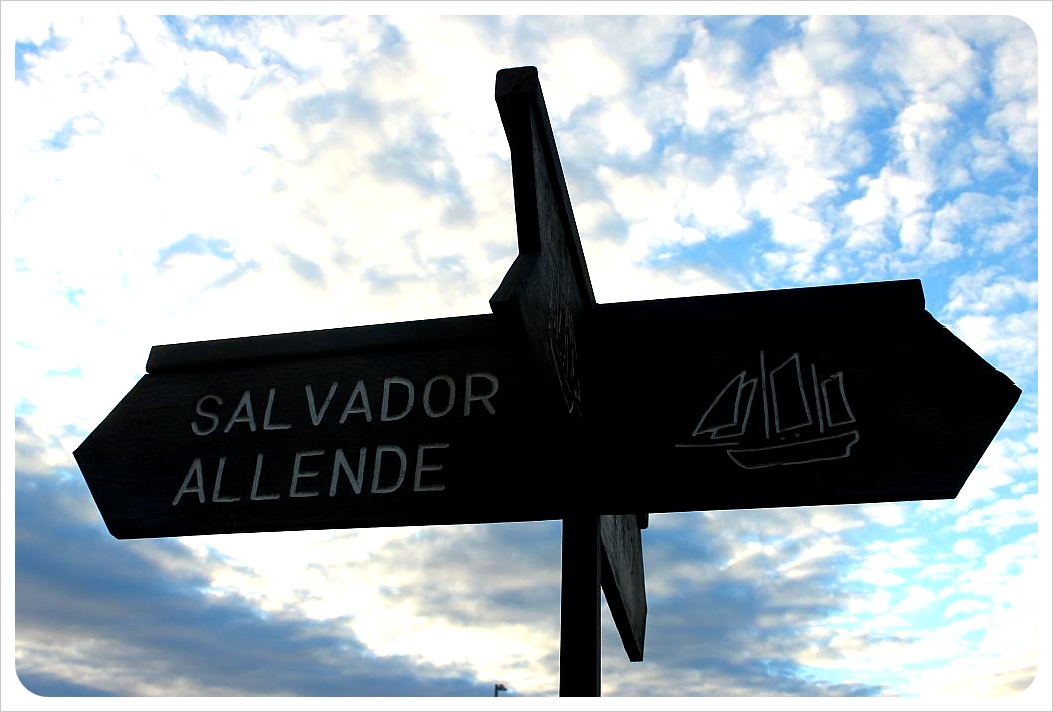 Only 180km (120 miles) long and 50km (35 miles) wide, Chiloe was inhabited by indigenous Mapuche people for thousands of years, but had been settled by Spanish conquerors in the 16th century. The Spaniards tried to change the original name, Chiloé, which means ‘place of seagulls’ in the indigenous Huilliche language, to New Galicia, but the indigenous population rejected that and the original name remained. 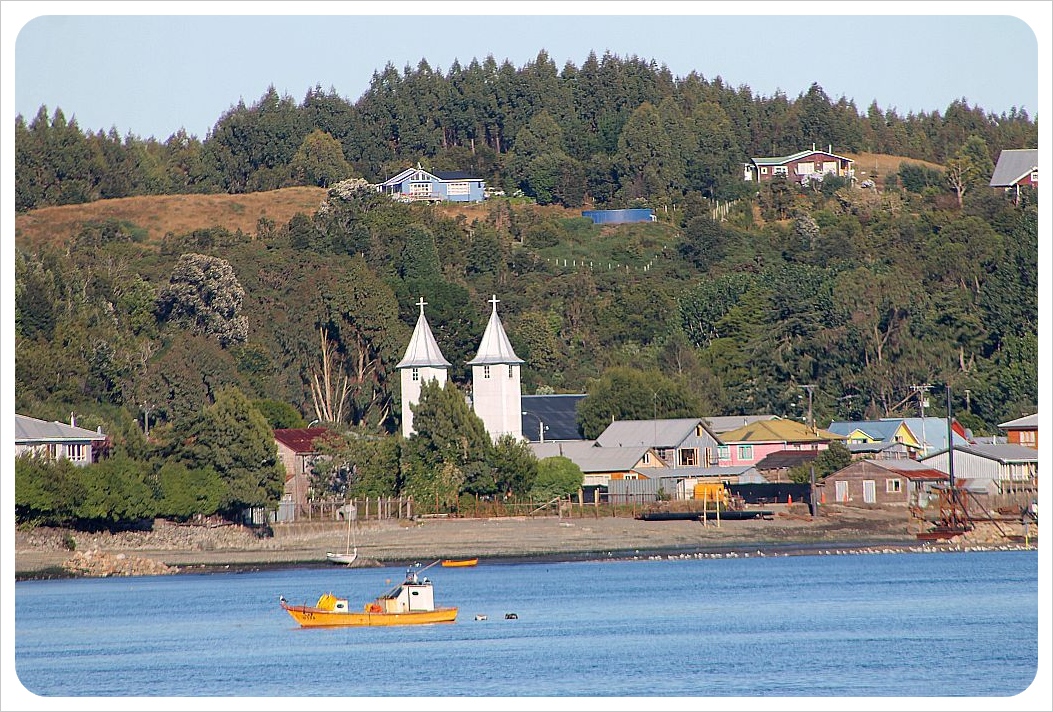 Although it has been populated for centuries, Chiloé was isolated from the mainland until the 1800s. Even today, despite increasingly frequent ferries, the island felt entirely different to anywhere else in Chile. 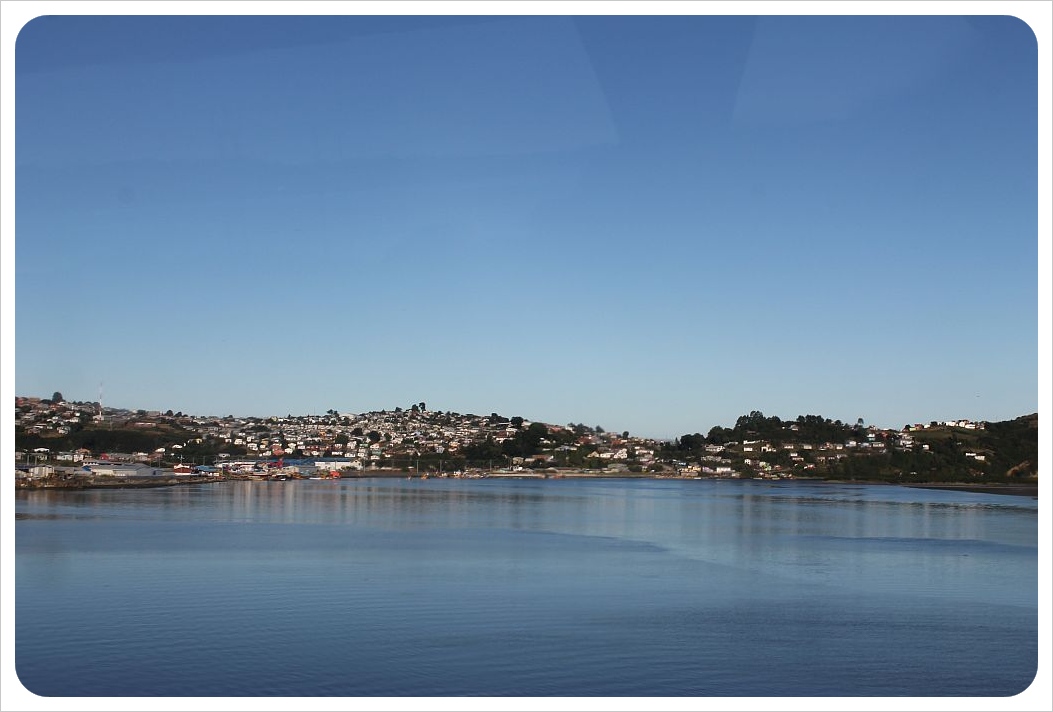 Our first stop on Chiloe was Ancud, a fair sized fishing town. We arrived by bus, including a half-hour stint with our bus and many others loaded on to a car ferry across the Chacao Strait. The air here was tangibly cooler than on the mainland, the first sign that we were nearing Chile’s Antarctic territory (the penguins we were about to see also being a clue!). 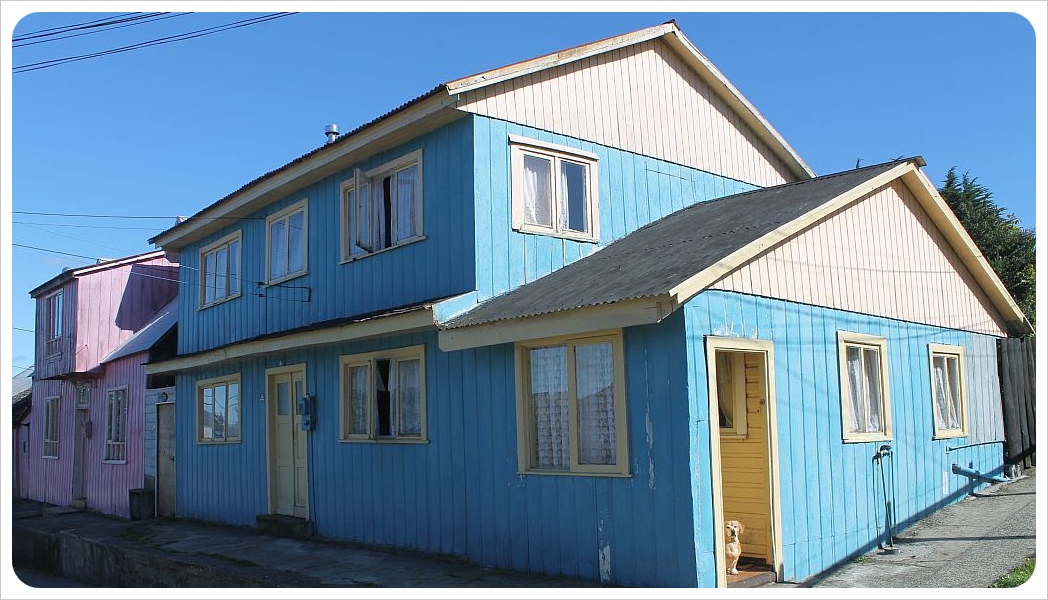 Sunsets were blindingly bright over the water in Ancud, a town which reminded us surprisingly of Scandinavia, with its colorful little fishing houses resembling Denmark or Sweden. Still clearly in Chile, however, fitness plays a large role in daily life even here, with the coast lined up and down with workout machines similar to those we found in Santiago and further south in Puerto Natales and Puntarenas, too. 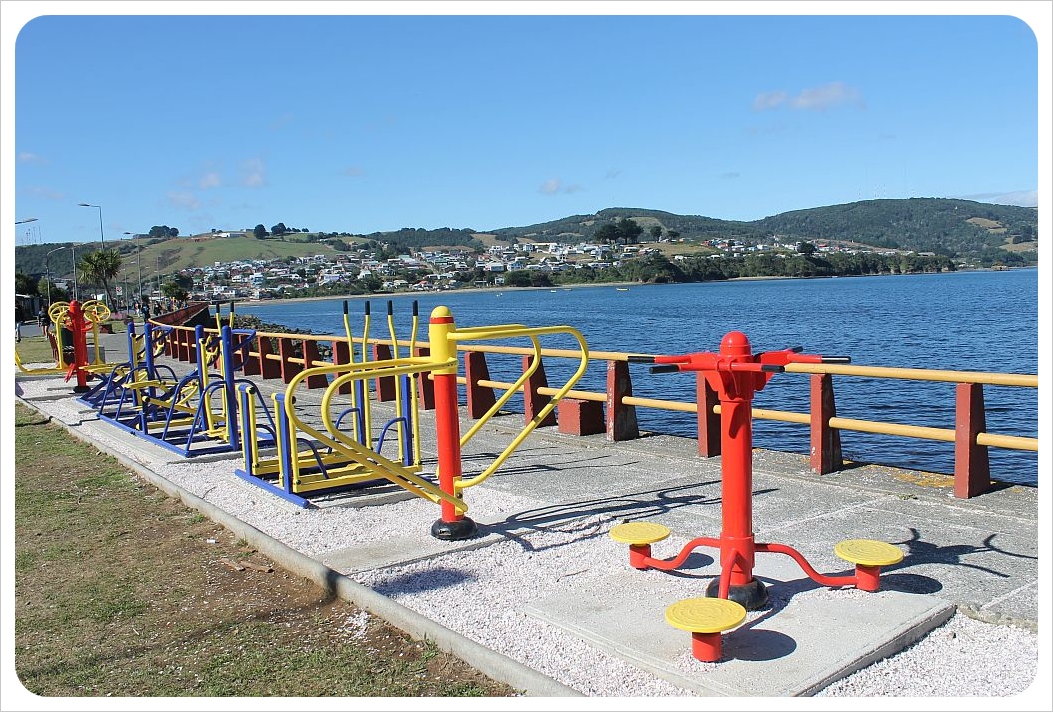 Despite rough, rocky streets with the most basic shops even in the center, we were struck by how ‘urban’ the center felt (not really, but kind of). After watching the sunset, we stopped on the town square where the town’s teenagers dressed in skinny jeans and converse shoes had all gathered to show off their skateboard tricks on pipes and ramps while a very decent electro music duo entertained the crowds from under the gazebo in the center of the square. Pimped out cars cruised by with bass pumping out of their speakers so intensely the pavement vibrated. As we walked around the scene, we spotted some really good street art, beautifully intricate mosaics and, just like in Santiago, impressive sculptures – though these were carved entirely of wood. 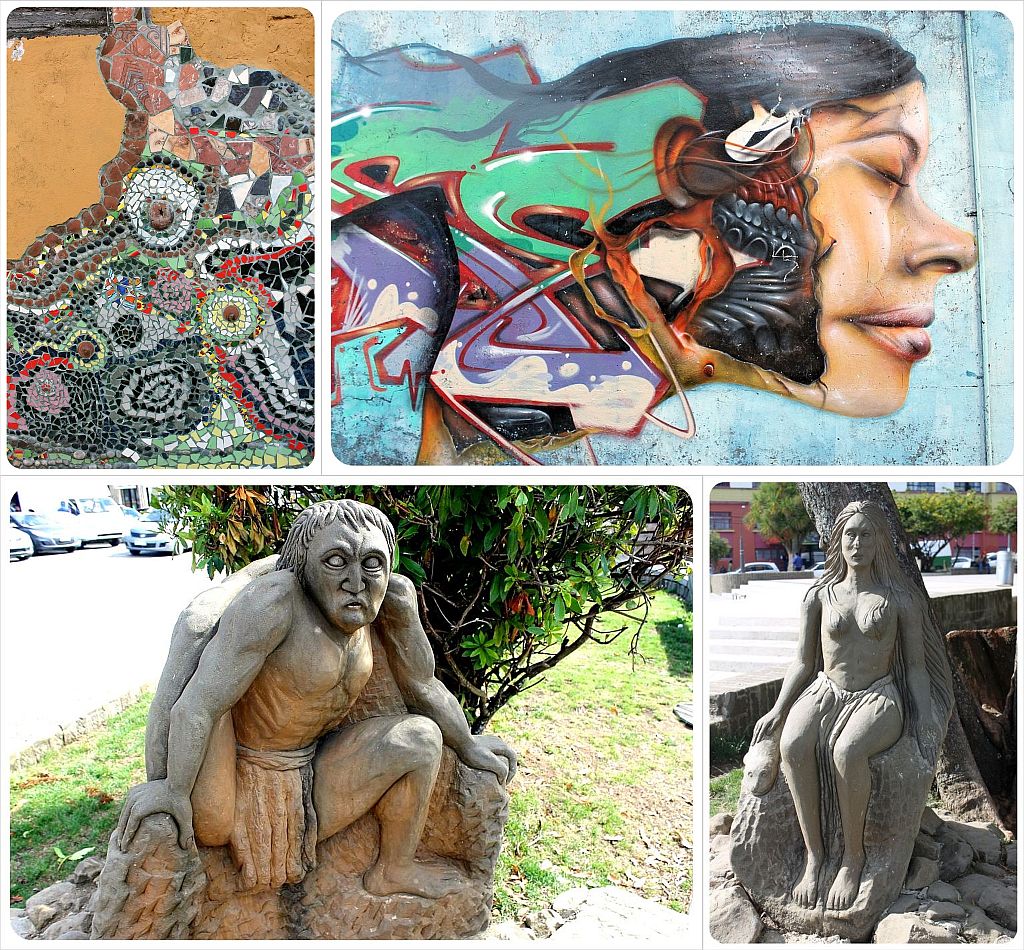 The most charming thing was that even with the booming bass and gobs of hair gel, the whole things felt so wholesome. Families with kids eating cotton candy and older people sat smiling and chatting on the same square, while groups of old ladies gathered for their coffee and kuchen break in a tea room just around the corner, and the music was out by a respectable hour. So far, this blind date was working out just right. 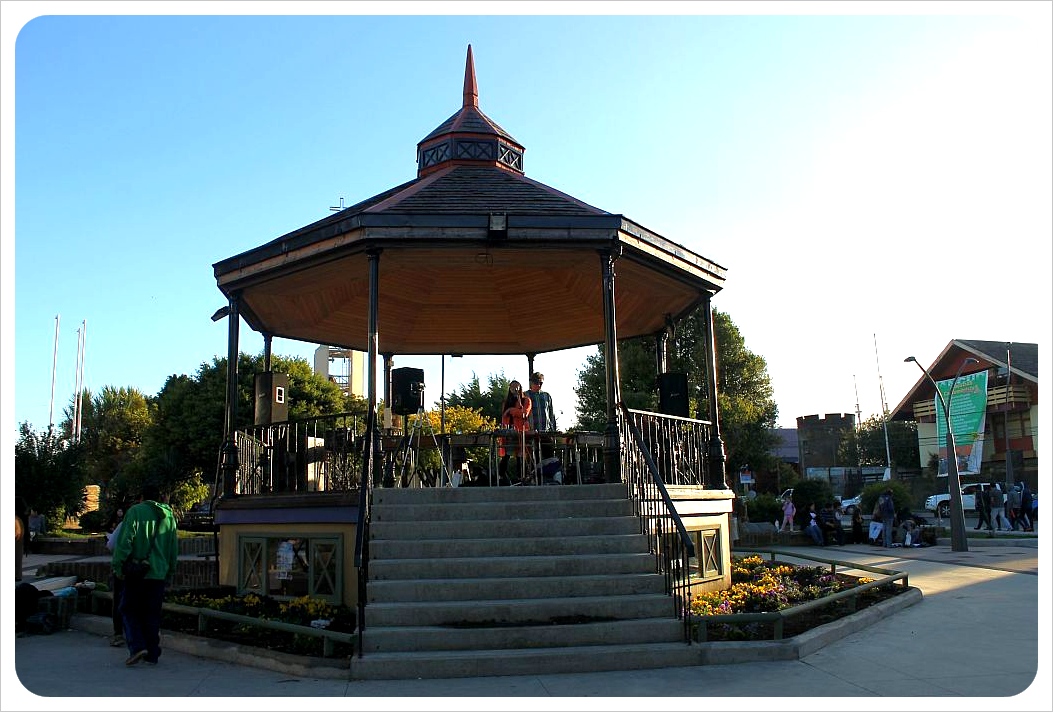 On to Castro for blind date number two

The next morning, we hopped a bus to Castro, the capital and biggest town on Chiloé. Here we were to meet Sam and Zab, a British couple who had just started their indefinite travel adventure a month before in Buenos Aires. One of the best things about running our website is meeting so many like-minded nomads, usually online first and then, when travel plans allow it, offline as well. After meeting at the bus station, we began our second blind date at the famous San Francisco wooden church, one of the few ‘famous’ sites in Castro. The rest of the day we left to Zab, who had planned out our day here before we would all head back to Ancud later that night. 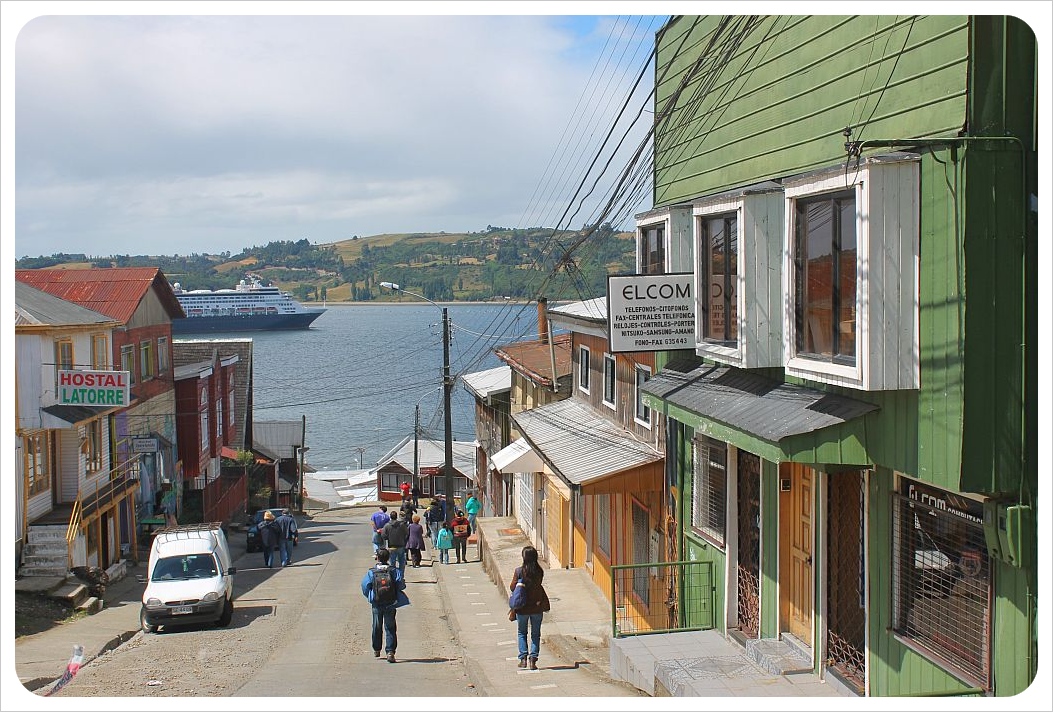 Zab brought us for tea and scones to the charming Café Del Puente, which was a great introduction both to each other as well as to palafitos, a style of houses on stilts that are unique to Chiloé. At the end of a row of these Palafitos, the café itself also sat on stilts. During low tide, you can see all the way to the bottom of the stilts, while water levels at high tide cover them almost entirely. 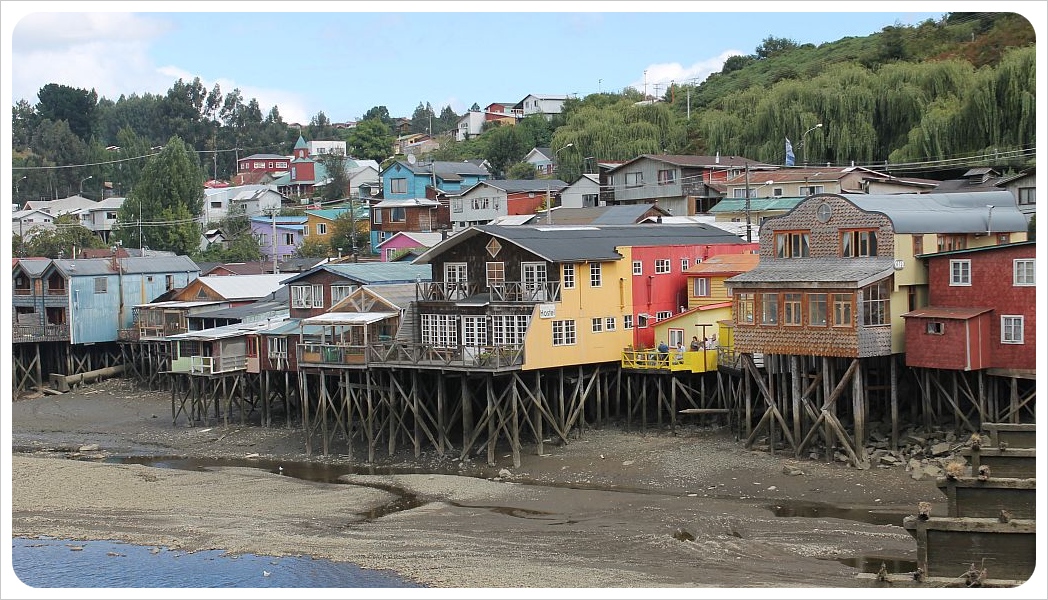 Aimless strolling ensued through the sleepy Sunday streets, as we broke off in pairs talking about travel, London, blogging and becoming nomads, and we ended the afternoon back on the beautiful Plaza de Armas in front of the pink and yellow San Francisco church. 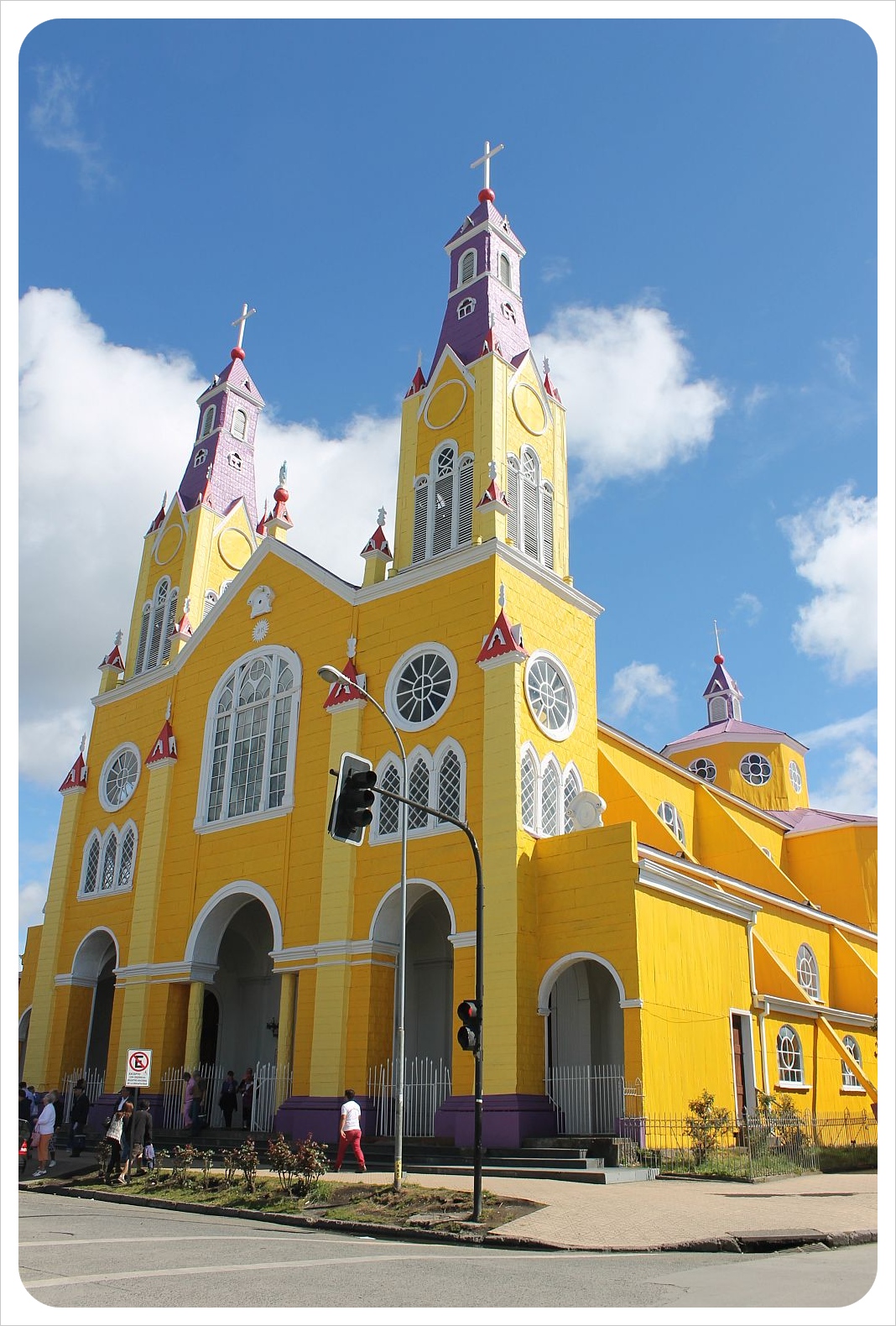 Our date with little guys in formal wear

Together we returned to Ancud and booked a tour for the next day to the Puñihuil penguin colony, one of the very few places in the world where Magellan and Humboldt penguins live side by side. This would be our first ever wild penguin spotting and we were super excited for the experience. 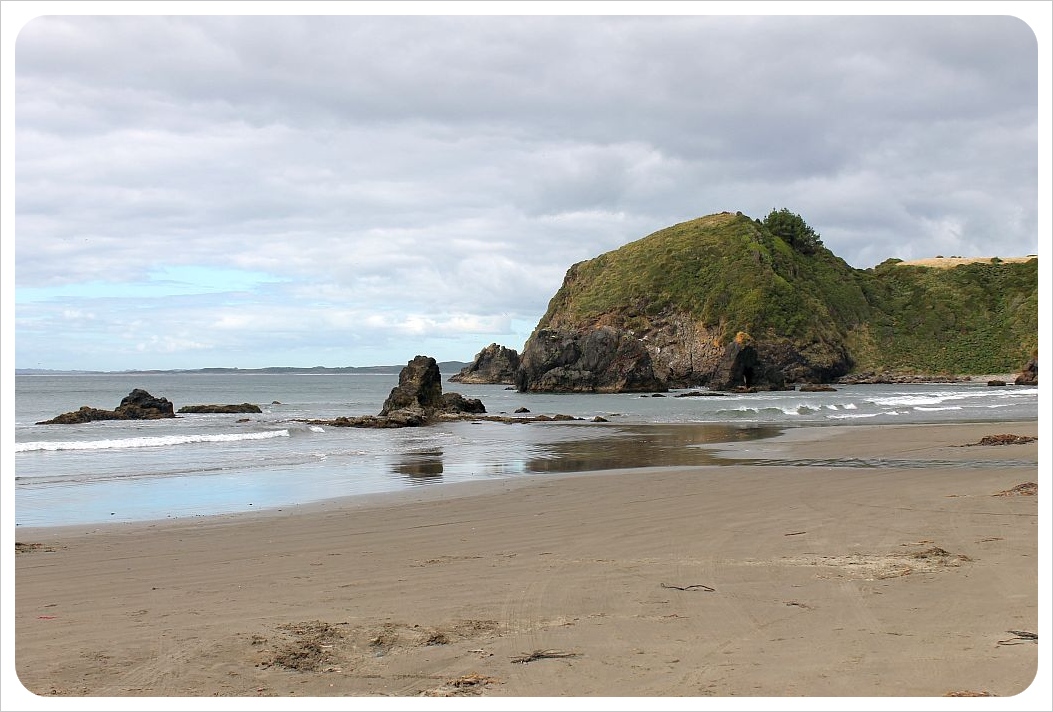 The tour started with a 20-mile trip in a minivan with other Chilean tourists along an unpaved road, through farmland and rolling hills and Sam’s first ever views of the Pacific Ocean. Because there had been a distinct lack of tourists on Chiloé so far, we were caught off guard by what a well-run tourist operation this penguin-spotting event turned out to be. A dozen or so boats floated just past where the waves crashed to shore, but we did not have to get our feet wet. Instead, groups of 12 were loaded onto a large cart on wheels, which was then pushed into the water, where we were offloaded safe and dry right onto the boat. 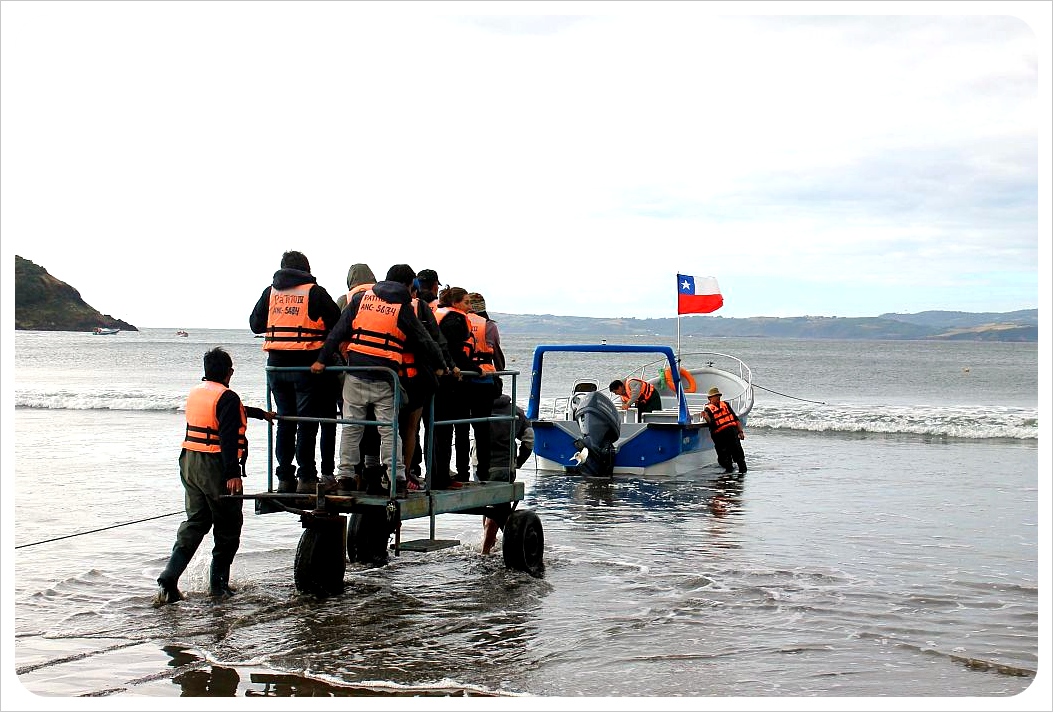 It was quite a sight to see these boats being filled up one by one, but it worked and we sped off to a group of small islands not far from the shore, where hundreds of black and white dots turned into little penguins the closer we got. It was amazing to see so many of them, even if it was from far away and as we cruised around the different islets, we spotted sea otters, several kinds of birds and cormorants, too. 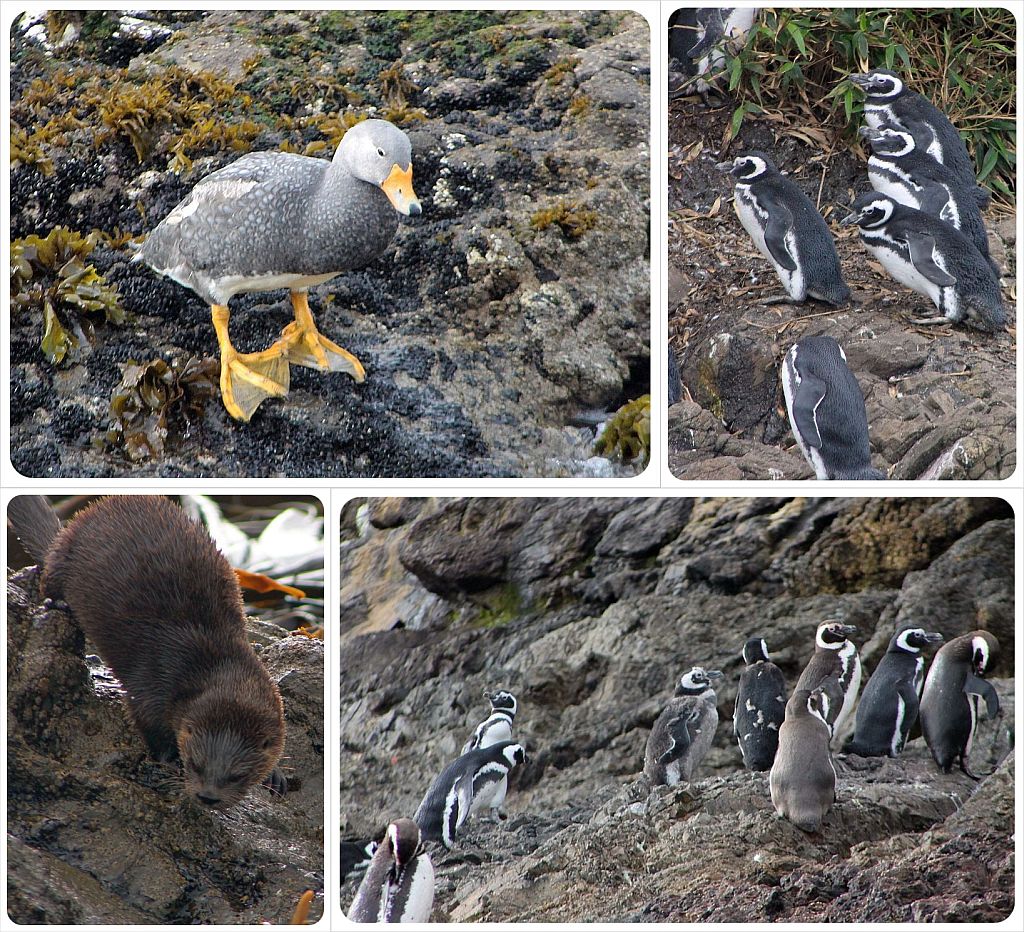 The boat bounced in the near-freezing water long enough for us to learn the difference between the penguins, which look to all be wearing the same tuxedos at first glance. The Magellanic penguins have black backs and white stomachs, plus two black bands in front between the head and breast, while the Humboldt penguins are smaller and are more of a grey color than black with only one stripe in front. Back on dry land half an hour later, we packed back into the van and as we drove back to Ancud through vast expanses of uninhabited land, I thought what a special place this remote island really is. 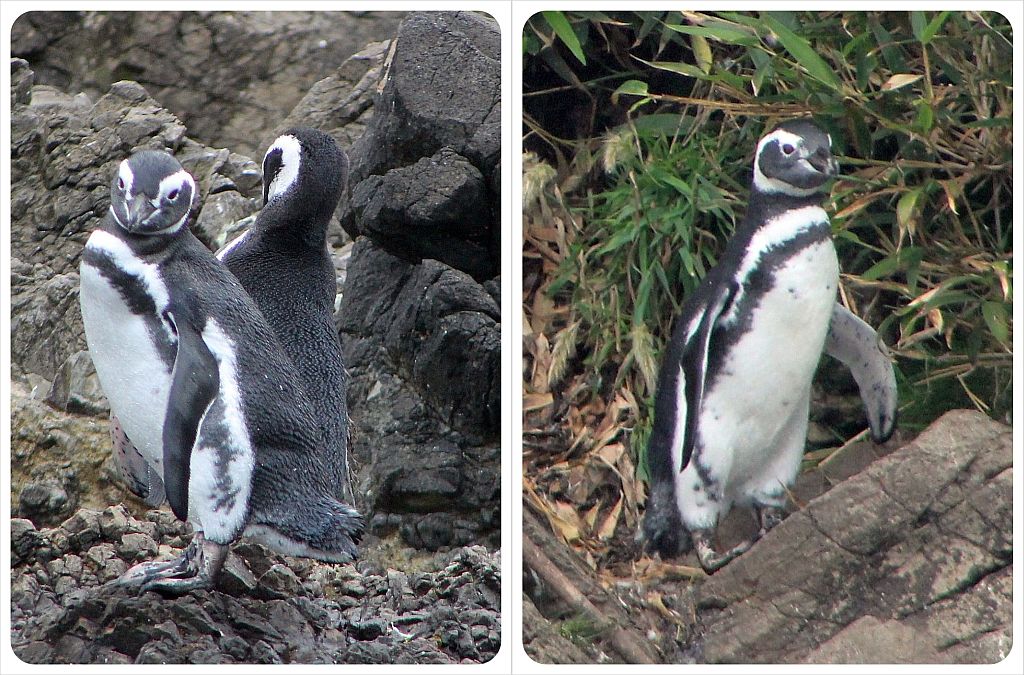 Even though it is possible to get to mainland fairly quickly on the ferry, the lack of a bridge keeps visitors to a minimum, and Chiloe maintains the same distant feeling it must have had in early 20th century, when a ship from Peru would come once a year to bring nonperishable foods and other goods, while the people had to rely on farming and fishing for the rest of the year. 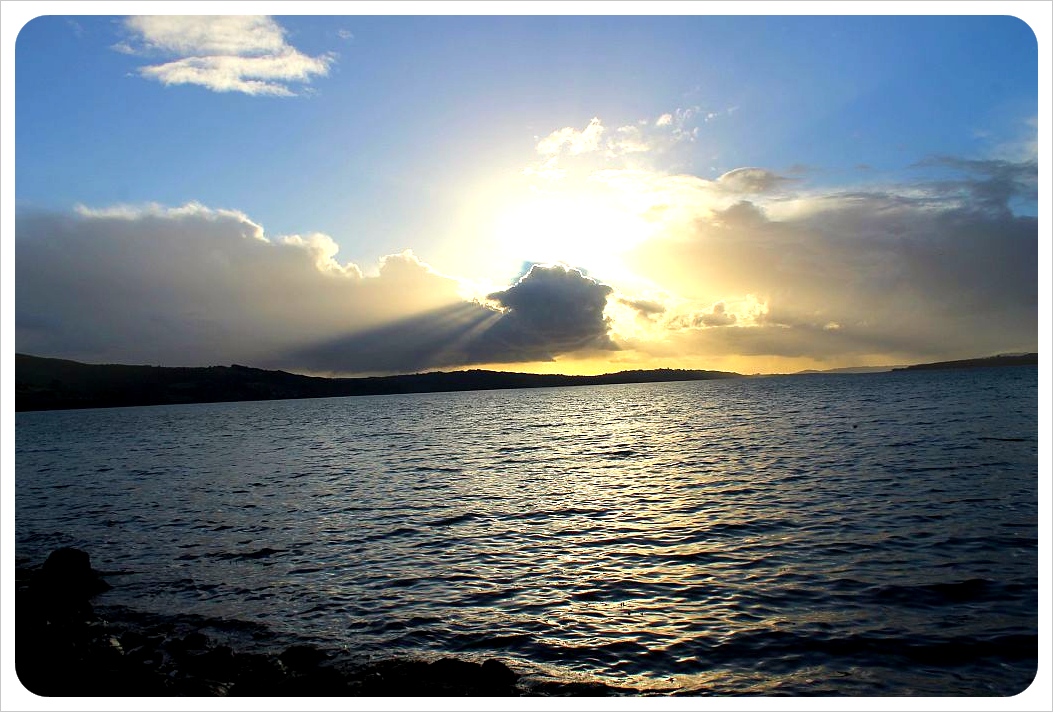 Regrets on our romantic island detour

Indeed, we had a few – though deciding on the detour was most definitely not one of them. Instead, we left the island feeling utterly romanced and wishing we could have seen more of its empty beaches and bays, explored more the national park and the tiny fishing villages.

During our bus rides we saw just a small part of the untouched countryside, but not nearly enough. For example, there is a route around the island to see the over 150 wooden churches across Chiloe introduced first by the Jesuits in the 17th and 18th centuries and continued later by the Franciscans. We saw only a handful. 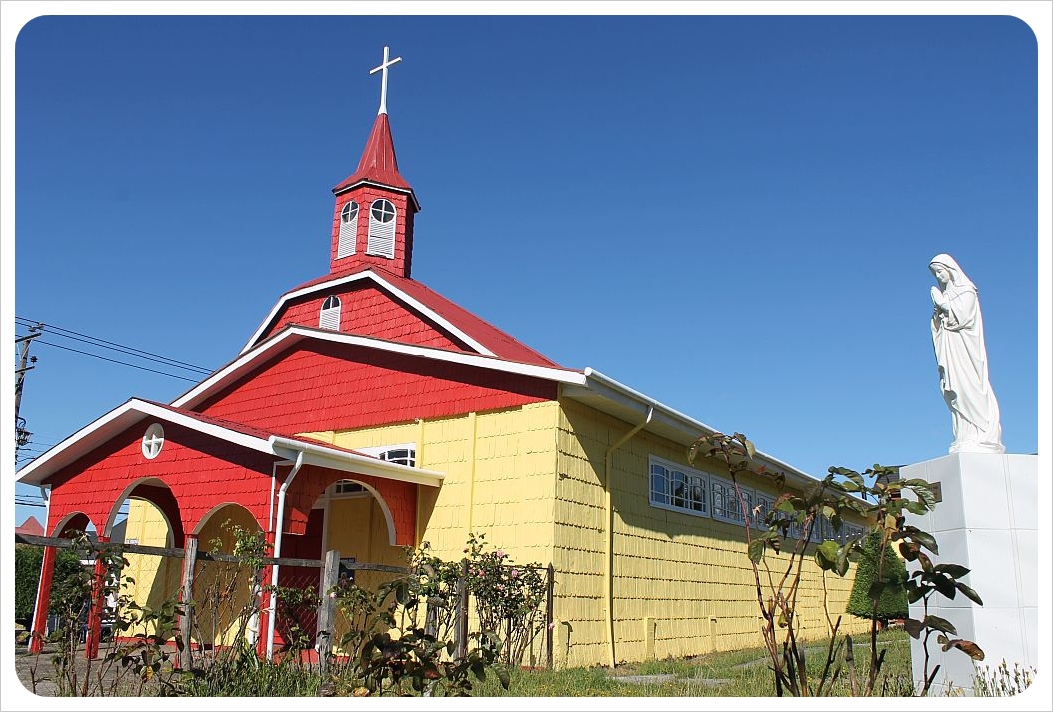 The best way to visit Chiloe is to rent a car in Puerto Montt or even where we started our detour – in fact our hostel in Puerto Varas had advertised rental cars for $60 a day. Split by four blind dating bloggers, this would have been an economical and liberating way to visit the entire length of this unique Chilean island. 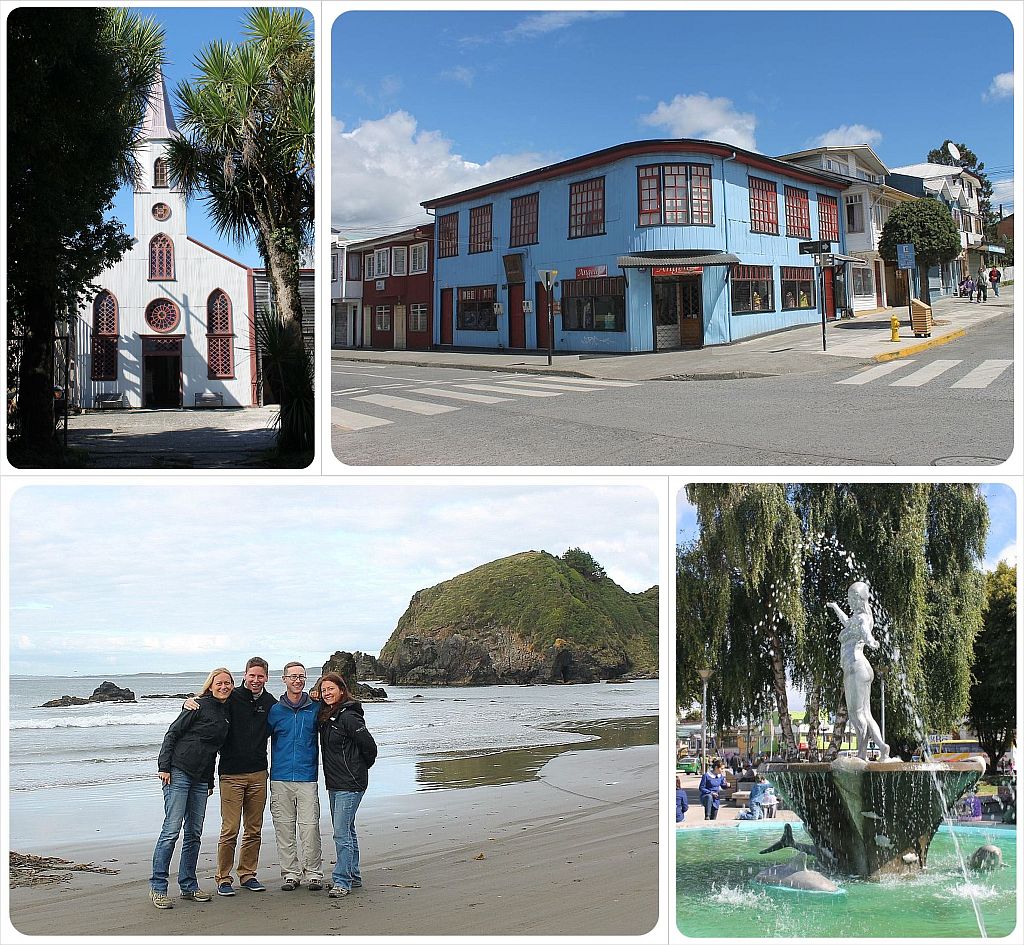 Alternatively, we could have joined a tour from Puerto Varas, so if you don’t want to drive yourself, you can hop on an organized tour . The tours take you to the UNESCO World Heritage sites (the wooden churches), to Castro, and to some scenic spots. There’s also a tour that includes a visit to the Puñihuil penguin colony. Both tours leave from either Puerto Varas or Puerto Montt and take around 10 hours –  a full day.

The Globetrotter’s Guide to Nightlife in India 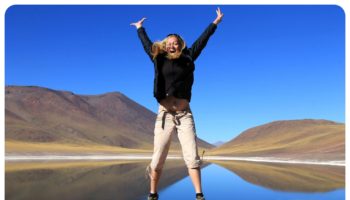 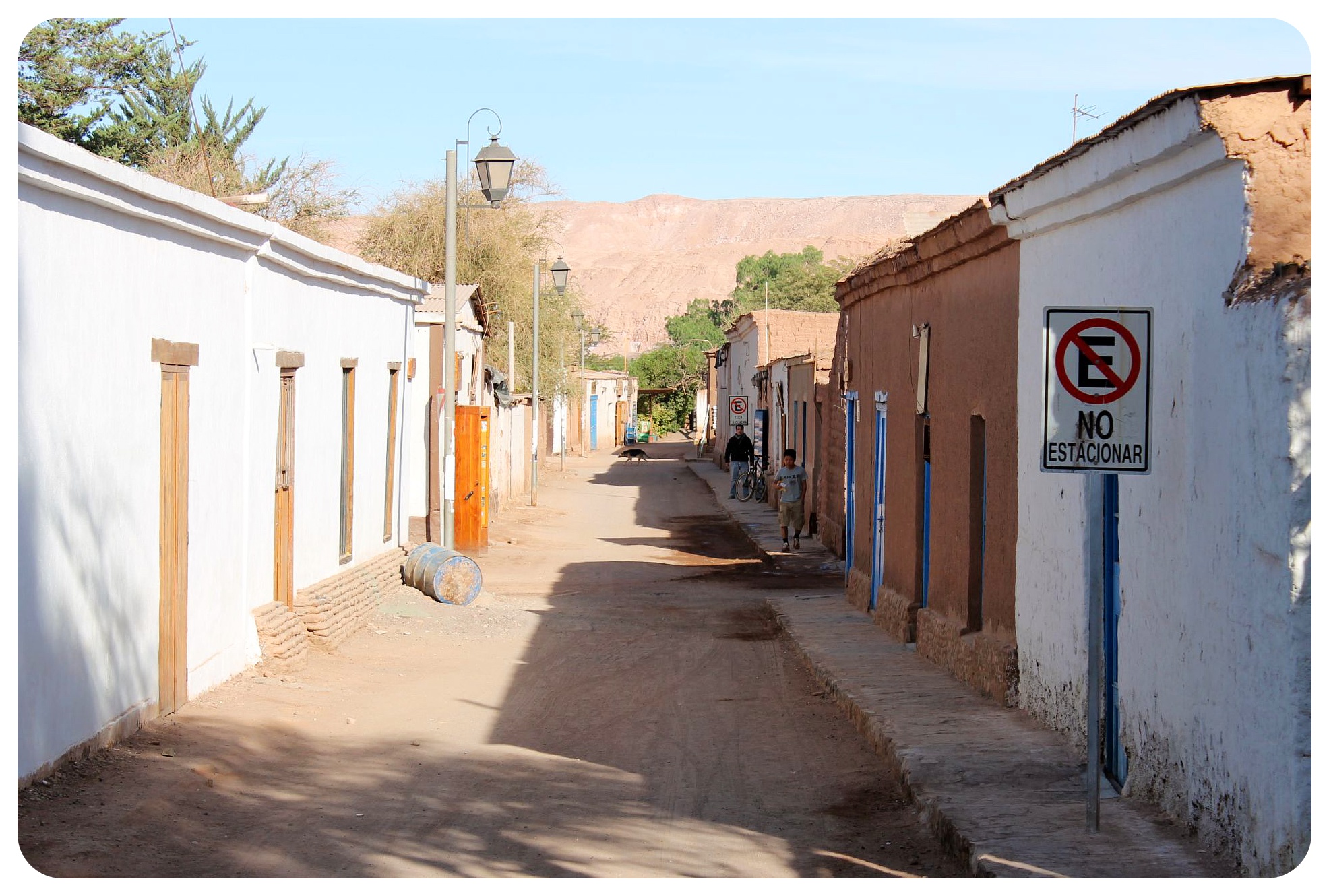